Summary: This walk on the Greater Manchester/ Lancashire moors climbs to the Pennine watershed at White Hill. On the way up there are views of the M62 and on the return some beautiful views of the hills and reservoirs in the area.

The Walk: The journey by car to start this walk was almost as much an epic as the walk itself. Making an early start from home at before 7.00am I first headed from Harrogate to Leeds and what is usually a 40 minute journey at that time was doubled because the snow from the previous night had not been cleared off the main roads and no gritting had been done either. Cars were cautiously making their way to work, slipping and sliding in places. Then having made it to the M621/ M62 at 8.20am I spent one of the next two and a bit hours stood on the motorway waiting for an accident to be cleared. I nearly gave up on the walk but with traffic crawling on the motorway in a snowstorm on Saddleworth Moor I eventually reached junction 22 and left it to take the A672 and the back roads to Newhey. I arrived at 10.45am, more than two hours later than I had anticipated. I was itching to walk. 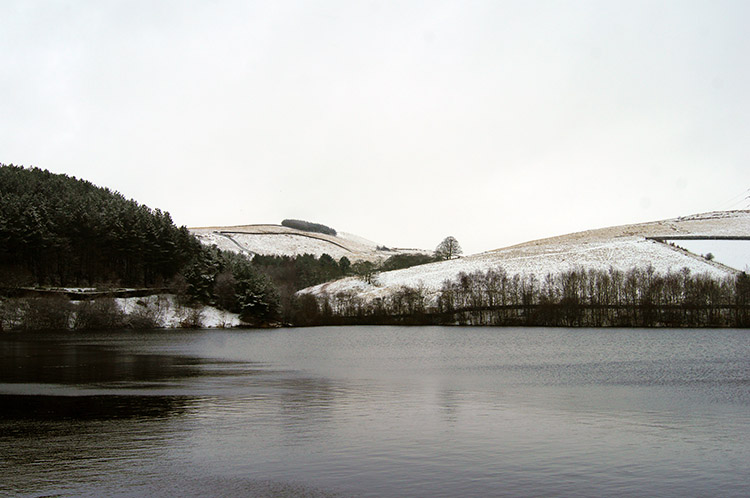 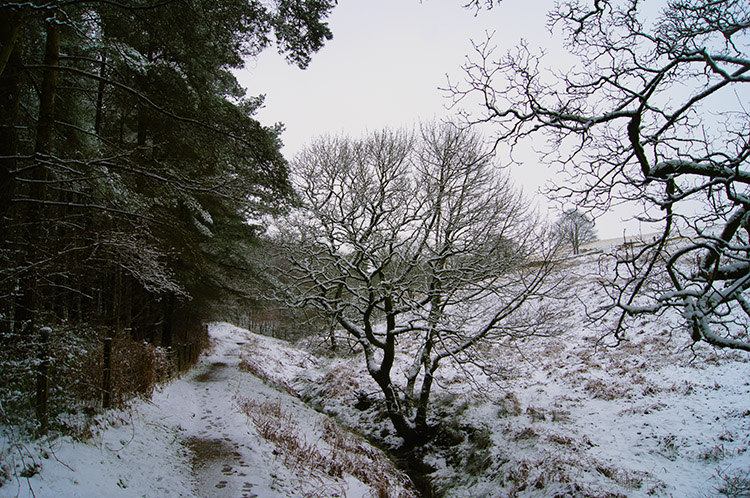 Path to the Pennines

I soon forgot the frustration of the car journey as I set off from Ogden Reservoir near Newhey by crossing the reservoir dam footpath to meet a good path beside a pine wood plantation leading north to my high Pennines route. The overnight snowfall which had been an irritation for the car traveller made it a beautiful setting for walking. The cloud filled midwinter sky defiantly hiding the sun could not defeat the glory of standing snow on a Pennine landscape. The white of the snow laden ground drew me vigorously forward on my uphill task towards my high point near the Pennine watershed. That achievement was yet someway off but I already looked forward to it as I paced on the path to beyond the tree line. 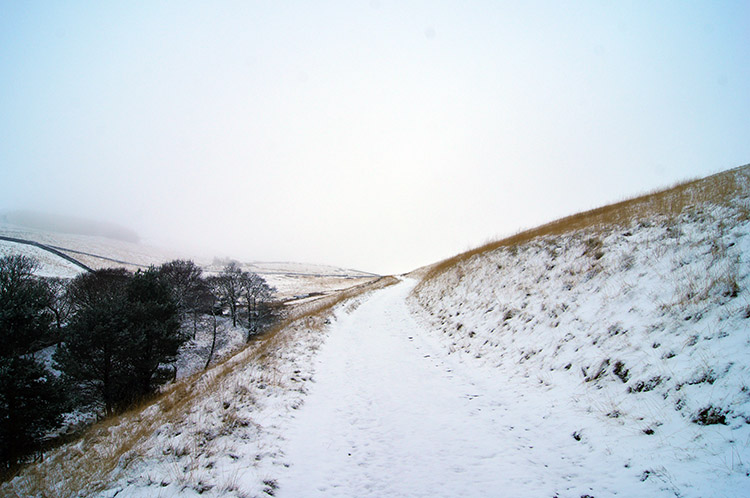 On the path to Tunshill Lane 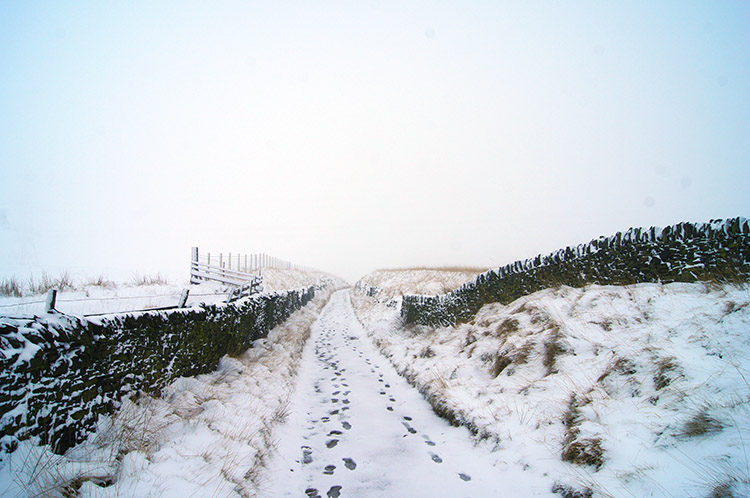 I reached a wide path cum bridleway leading towards Tunshill Lane on the Rochdale Way. It was mine for the time being. No other footsteps had trod it since the snow fell. About 400 metres along the path I came to steps, made by about a half dozen sheep. I looked right and saw them watching me climb to the moor. They stood motionless, heads moving only slightly to follow my track. The path to Tunshill Lane completed, I turned from northbound to east bound and followed the lane uphill on a steeper ascent than before. There were two sets of footsteps with me now, I was not the first on this stretch of path. The path was walled on either side too, first maintained in very good stead but as height was gained the wall deteriorated with gaps in the drystone walling appearing. The path which had been pretty level to walk on was now was getting rutted in places as well. 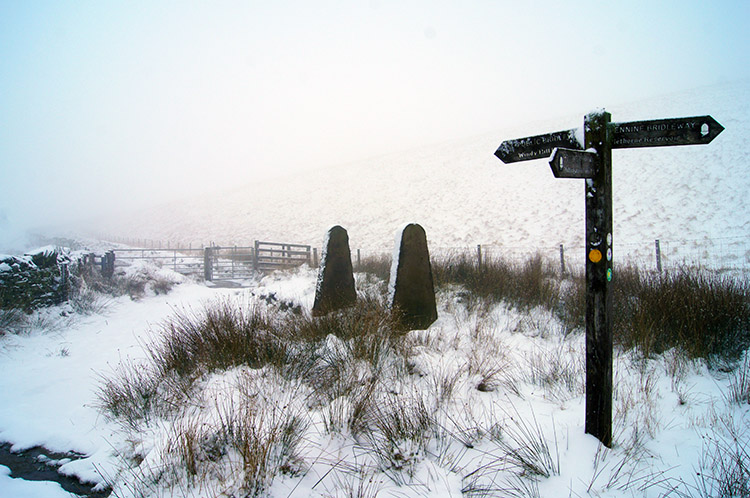 Junction of paths at Tunns Hill 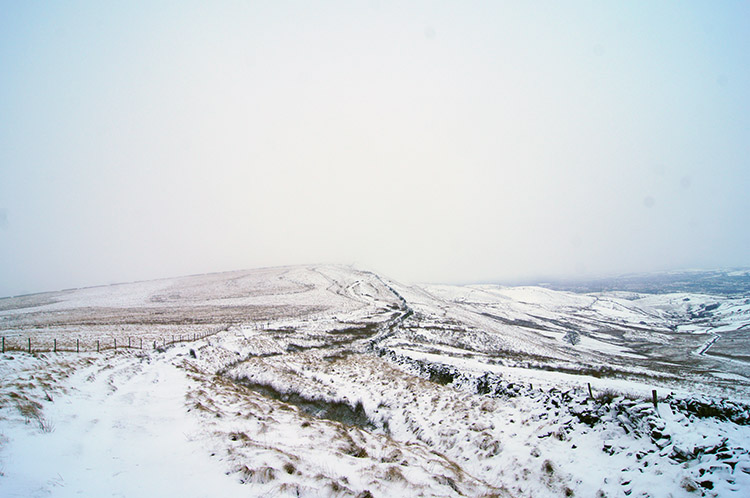 I came to another junction of paths, this one at 320 metres elevation near Tunns Hill. A sign indicated the three directions. The arrow pointing back on the course from which I had arrived indicated the route to Hollingsworth Lake near Rochdale. The arrow pointing straight ahead and continuing along the Rochdale Way pointed to Piethorne Reservoir and that is the way the other two sets of footsteps headed. My arrow of intend pointed to a left hand turn and one continuing up the moor to Windy Hill. I tasked myself for the further climbing and set off. The first part of the climb was, as before, in the walled enclosure of a bridleway but now the drystone walling was definitely unmaintained. Long lengths of it were collapsed completely and soon evidence of the wall disappeared, it being replaced by wooden staked wire fencing. A much quicker solution to corralling. The lack of drystone wall though gave an enhanced sense of wide open freedom. Apart from the distant drone of vehicles crawling on the M62 slopes the sense I felt was of pure winter stillness. It was sublime. 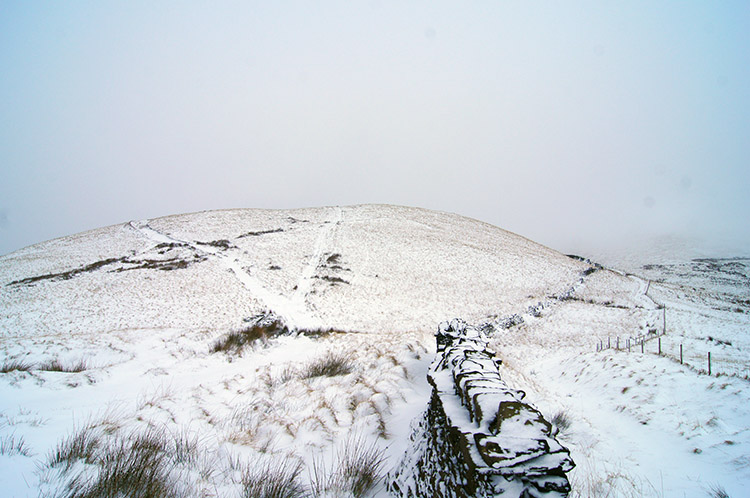 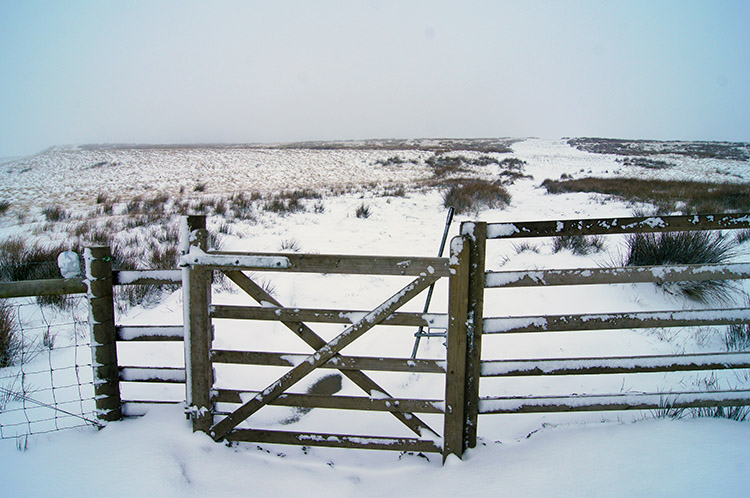 I crossed the area of the Windy Hills. The Ordnance Survey map titled Windy Hills, Windy Hill and Windy Hill in sequential order. I walked past all three landmarks on the map, the final Windy Hill being the highest at 389 metres. It was the one which was most clearly a hill too, the other titled ones being rolling humps of high ground. From my last and the most definite Windy Hill, of which I had been the only climber this day; no footsteps bar mine were there; I dropped down to the east side of it to Tag Heys and then followed the path on untrodden snow to a wireless station near Rook Stones Hill which brought me to a meeting with the Pennine Way path. I made friends again with the very section of path I had followed in 2011 during my Great Britain End to End walk. First it led me from the wireless station to a popular transport car and wagon park off the A672 on top of Bleakedgate Moor. As I walked across the parking area I watched another walker heading down the roadside towards the M62. He was carrying skis. It made the downhill sections quicker and easier for him I suppose. 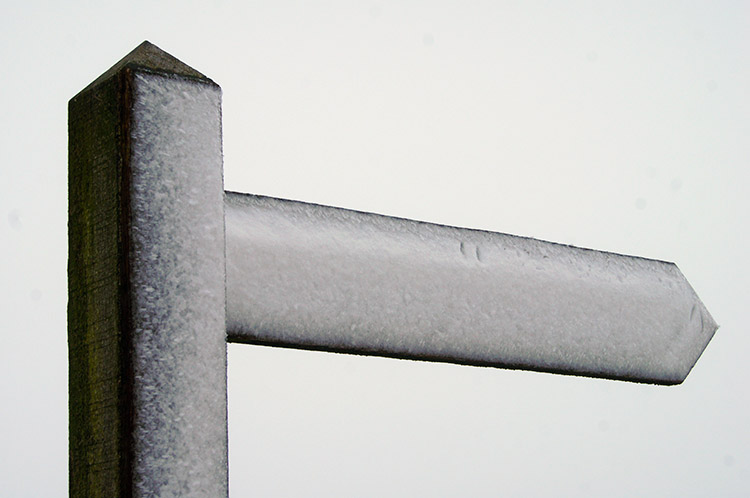 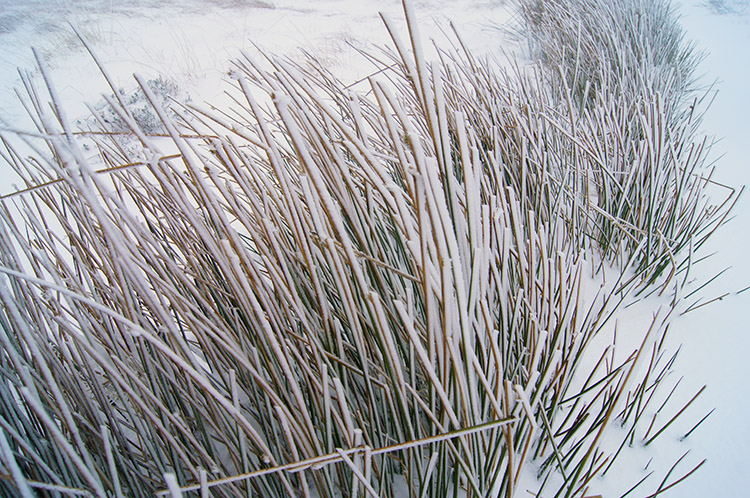 I had completed almost four miles of the walk in just over 1.5 hours after I had crossed the road and began walking along the Pennine Way towards White Hill. Still no footsteps bar the ones I was leaving were on the way which did surprise me. I had expected some on this popular National Trail, even on a white winters day. The sun was still showing no signs of breaking through the cloud though the forecasters had forecasted it breaking out in the afternoon. And it was now afternoon as I walked the path, snow deep in places having settled on top of the moor. I was near the Pennine Watershed now, the line from where water east of it trickles into the waterways of Yorkshire and bound for the North Sea and from which water to the west of it trickles into the waterways of Lancashire and bound for the Irish Sea. Venturing off the path near White Hill a couple of times while walking along the watershed line because deep lying snow made it indistinguishable from the ground around my feet I sank into water which could not decide which route to take. East to March Haigh Reservoir or west to Readycon Dean Reservoir? 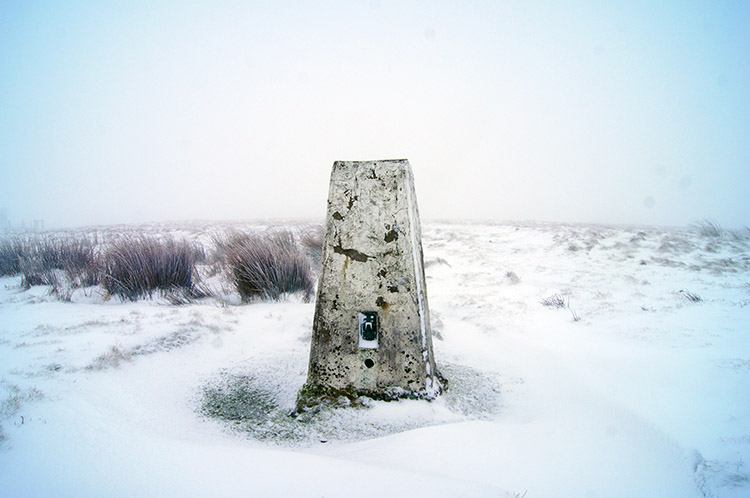 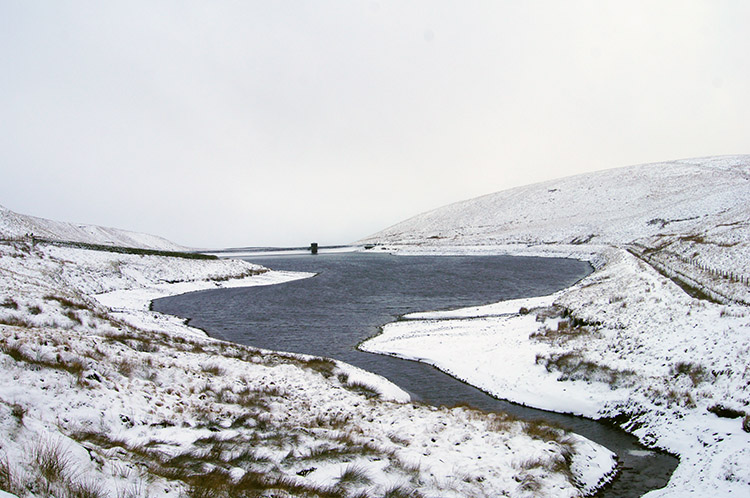 I reached White Hill trig point and the feeling of remoteness was palpable on this day of solitude. The last time I had touched the trig point was during that epic 1,120 mile walk while in the company of four friends. There was no one to talk to this time, not a soul around for some distance but this time I embraced the loneliness. Some walkers like being in company, some like walking alone. I welcome both, each having their place. For today though, solitude was the wish, to be at one with nature on the Pennine moors on a proper snowscape winter's day. After tapping the trig point and thinking of the camaraderie of that last time on White Hill I set off on my route once more and walked along the Pennine Way south towards the A640. After a mile of walking across the moor I reached the road and left the course of the Pennine Way to follow the road downhill for a third of a mile before turning right along a track which led me to Readycon Dean Reservoir. Off the moor now and in a sheltered wall near the reservoir dam I stopped for lunch. A crow welcomed me as I sat down, hoping for a crust I imagine. I left one for the crow though I did not see it take the offering as I packed up my snack and my flask and resumed walking. 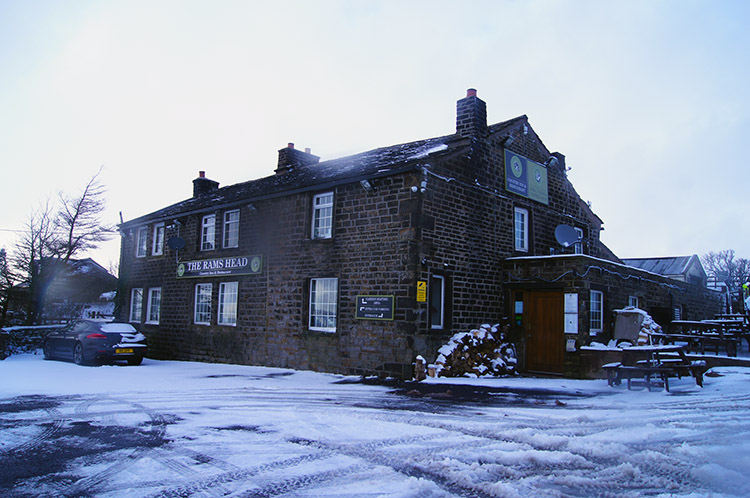 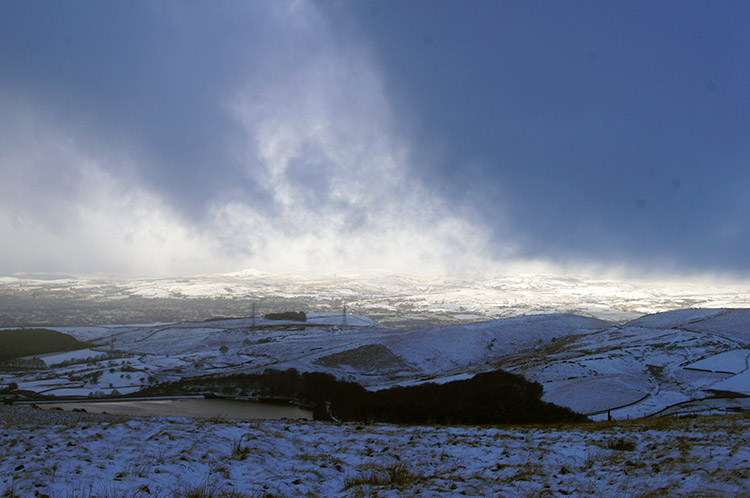 Having taken out time for my lunch was just long enough to tarry while the skies began to change. As I walked from Readycon Dean Reservoir westwards bright glints of sunlight were appearing in the far west above the City of Manchester. A change was coming, too late in the day for my walk but the view to the distance was a magical attraction all the same. I reached the A672 for the final time on my walk and crossed it near the Rams Head Inn, close to the village of Denshaw. I continued walking, now on a steep descent from the moor heights towards a series of reservoirs, namely Piethorne, Kitcliffe and Ogden. The latter one was from where I had started and to where I was returning. As I continued my descent more sunlight apertures in the dark sky welcomed me down off the moor. 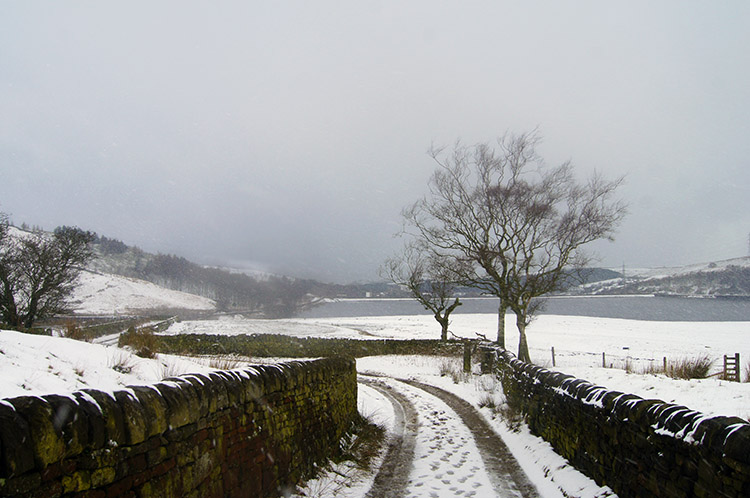 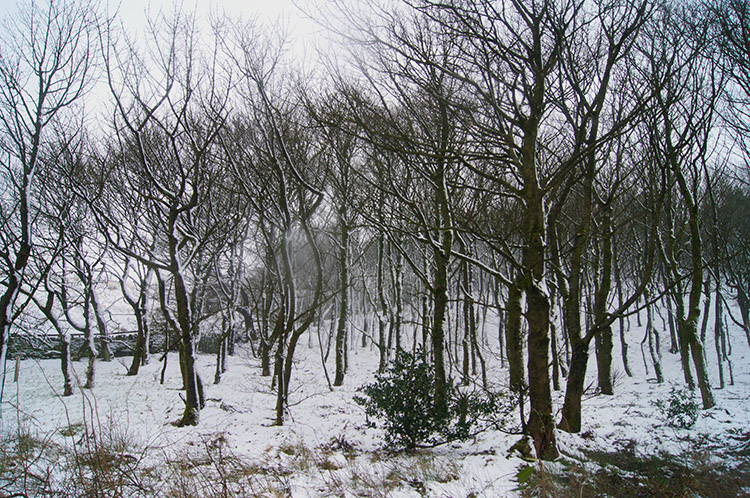 Despite the promise of sunshine it did not have enough potential to reach me. As I reached Piethorne Reservoir the sky suddenly darkened and I was hit by a short snowstorm. While brief in length it was quite heavy in severity. Then as I reached Kitcliffe Reservoir the low winter sun glinted on me for a split second. Indeed it did, a short warm welcome back to the region of Ogden Reservoir from where I had started. The last mile of walking along the line of reservoirs had been on access road but it did not detract from the walk at all. It gave me time to amble in and reflect on a lovely day out on the winter moors of the Pennines; the evocative spine of England. I loved every minute of this solitary walk.