Summary: The Pennine village of Bowes evolved around the medieval castle within the village which in turn evolved around the Roman fort of Lavatrae in the early AD 70's. This walk begins in the village and follows the River Greta upstream to the natural arch of God's Bridge before crossing open land to follow Sleightholme Beck, ones of the River Greta's tributaries. From the beck the walk climbs on to the Pennine moors and progresses over wild open uplands to the high point of the walk at the Citron Seat trig point before gently rolling off the moor to Gilmonby and back into Bowes.

The Walk: The walk begins in the historic village of Bowes which I remember visiting as a boy in the 1960's while accompanying my father on long distance truck journeys to Scotland. I recall the village fairly bustling then with the businesses of upland farming and of catering for the traffic passing through the village on the A66 keeping village life going. Now when I turn off the bypassed A66 into the village it is often very quiet. On occasions I have not seen a soul stir while parking up and setting off on walks. How time has changed the fortune of Bowes. 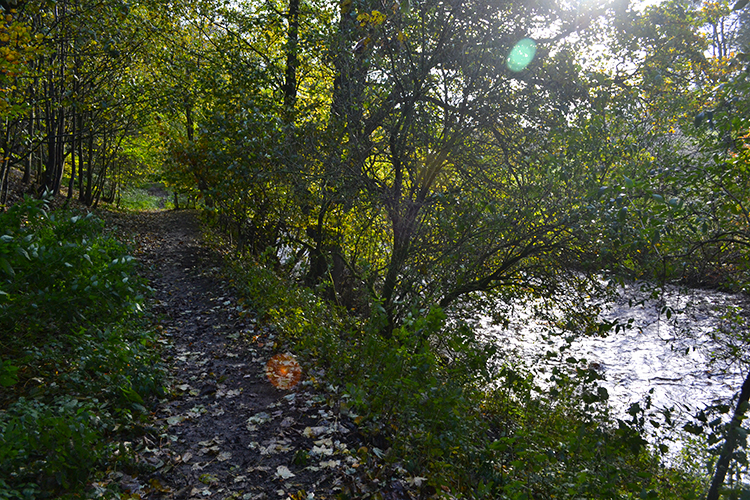 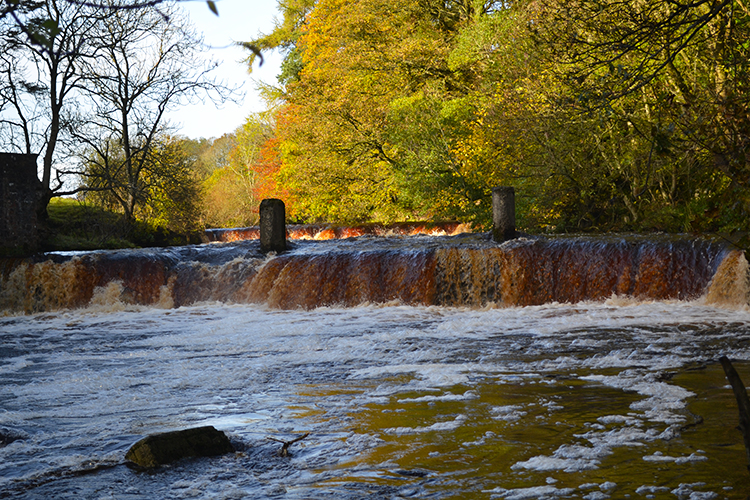 Weir on the River Greta at Swinholme

This walk sets out from the village crossroads and heads west along the main street before turning south on the lane between St Giles Church and the site of Bowes Castle which is also the site of the earlier Roman fort of Lavatrae. Little evidence of Roman occupation remains, the Medieval castle was built within the perimeter of the fort and utilised much of the stone first placed by the Romans. Visit the site of fort and castle on the return. For now continue along the lane and across a field to reach the River Greta. Note this is not the same River Greta of Keswick and the Lake District. This River Greta flows east into the River Tees. However, follow it west and upstream to a weir on the river at Swinholme. 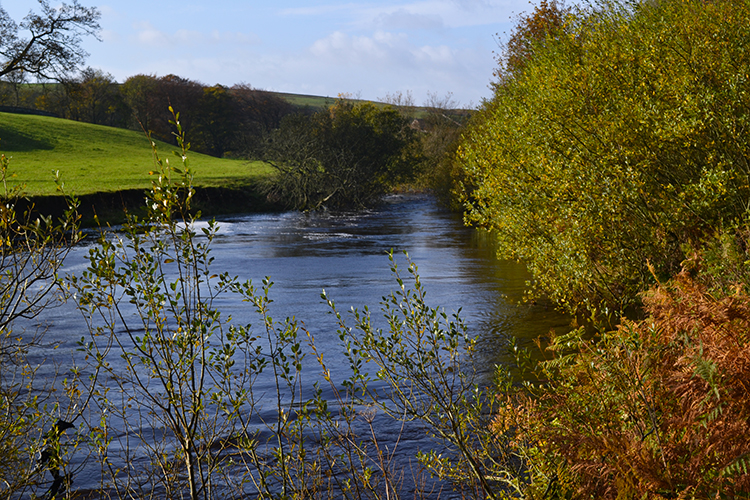 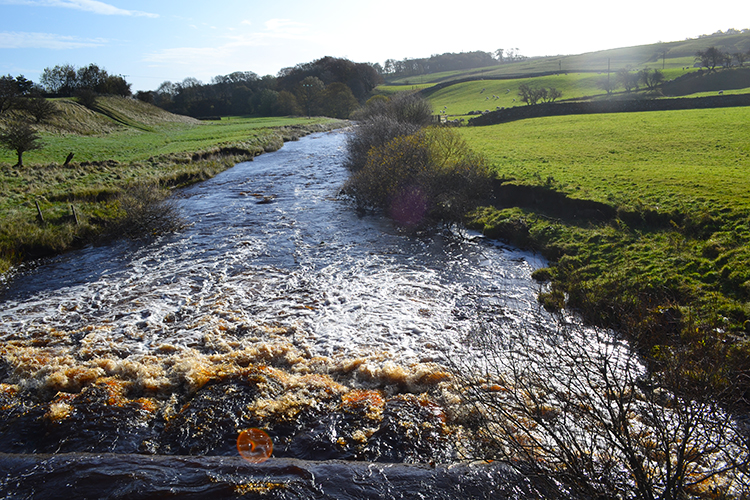 Light reflection in the river

From Swinholme the walk crosses from north to south side of the Greta by way of a footbridge and then follows the course of the Pennine Way sticking parallel to the course of the river but separated by a series of paddock fields until West Charity Farm is reached. 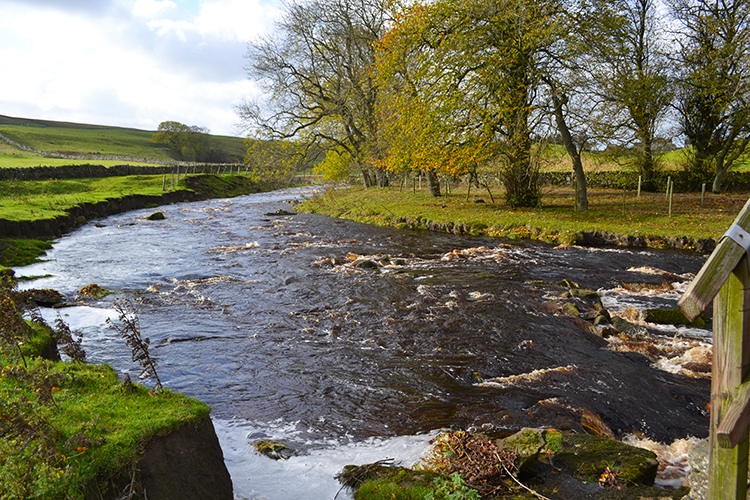 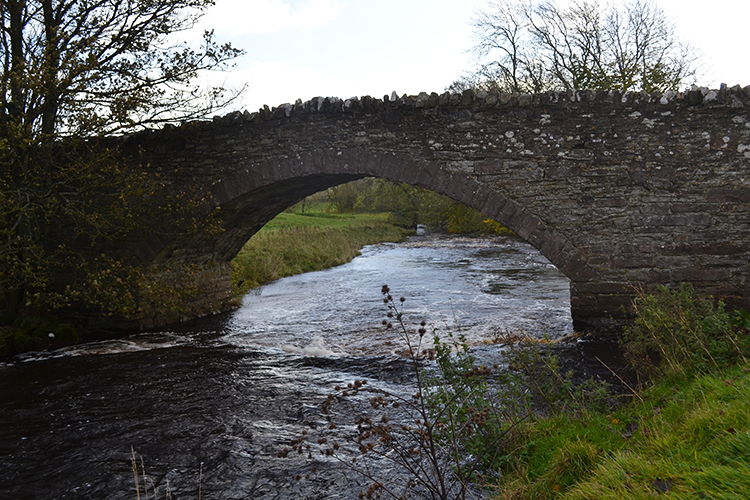 After West Charity Farm a tributary of the River Greta is first encountered when Sleightholme Beck is reached and crossed by way of the second footbridge crossed on the walk. Here a short detour downstream of the beck will take you to where the beck ends and flows into the river. Another short detour from East Mellwaters which is the next farm reached will provide a lovely view of the stone bridge giving road access to the farm. 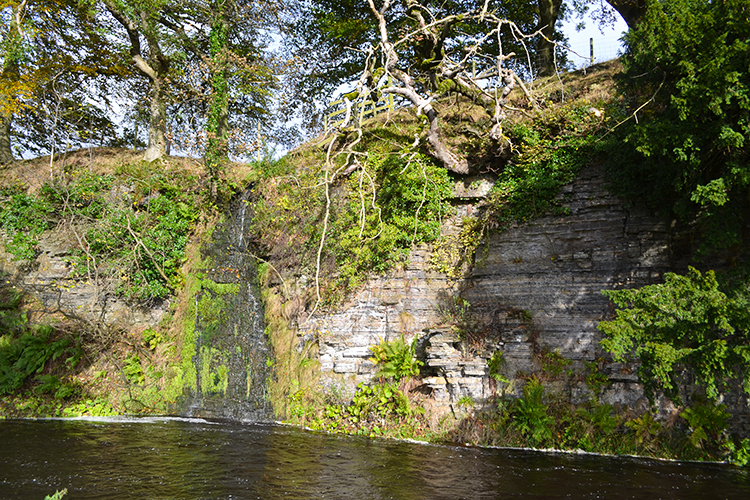 Rove Gill trickles into the Greta 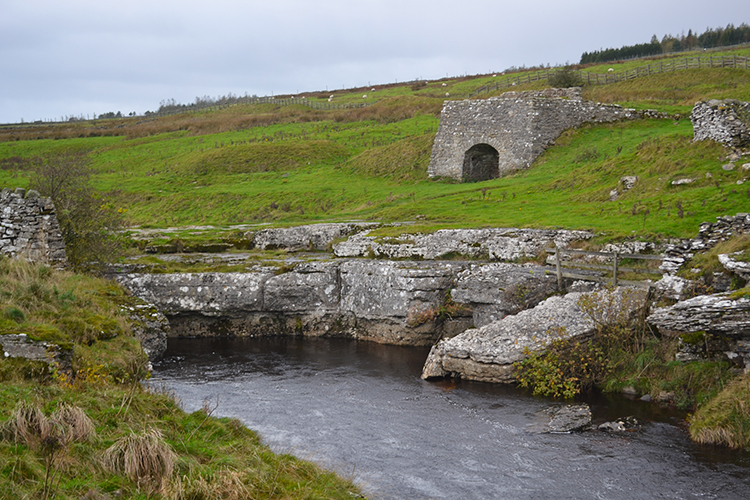 From East Mellwaters the walk continues on its course west, first continuing on the Pennine Way and then by temporarily leaving it to reach a natural stone arch bridge. Note by sticking to the path following close to the river on this stretch will provide views of Rove Gill flowing into the Greta and a point in the river where the water disappears under a rock shelf. 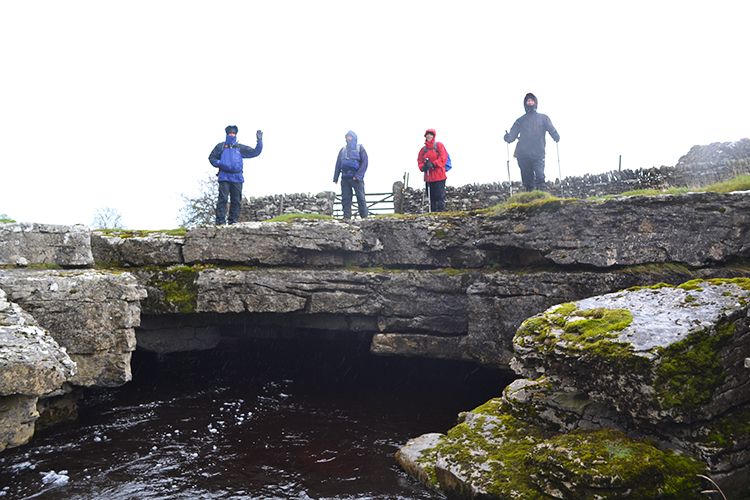 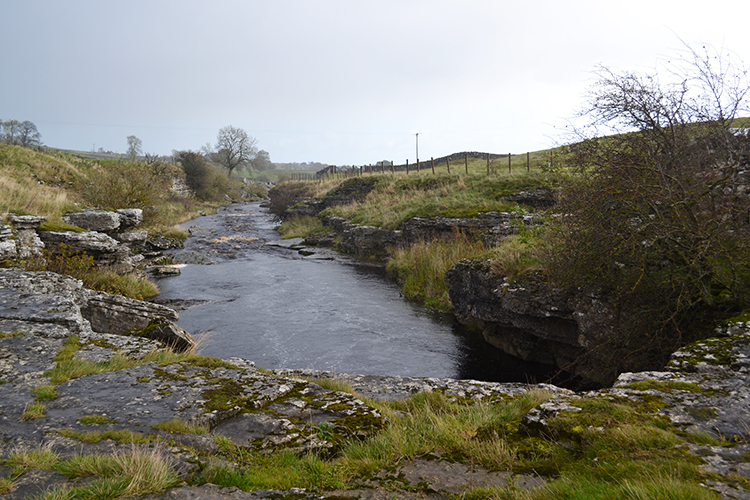 The view from God's Bridge

The natural stone arch bridge marks the north-western extremity of the walk. From here we turn south but not before standing on God's Bridge. The bridge is actually a thick construct of limestone, over three feet thick in two distinct layers. It is reputed to be the best example of a natural river bridge in England. It is certainly beautiful, a pleasure to stand on the bridge and watch the river flow its way underneath. 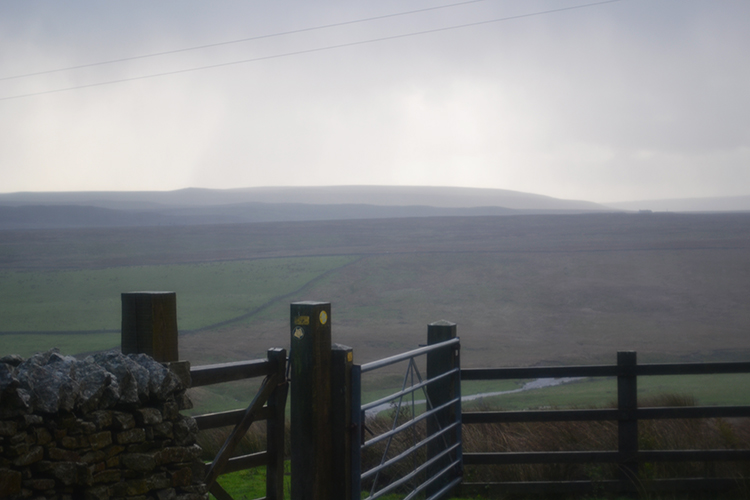 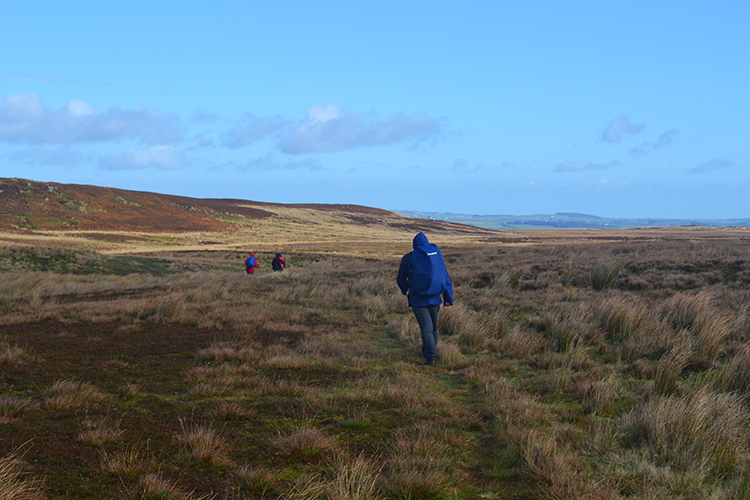 From God's Bridge the River Greta is left behind and Sleightholme Beck rejoined by following the Pennine Way footpath southwards to Trough Heads. (Note, tracking back down the beck leads to Sleightholme Beck Gorge – The Troughs: site of special scientific interest which is particularly important to botanists. In spring and summer it is a must visit). If not backtracking to the gorge then follow the beck upstream towards the moor and soon after Intake Bridge, the third footbridge of the walk, is crossed. A little further on by the beck leads to Sleightholme Farm at Skitter Hill where the watercourse is left behind, leaving a walk onto open moor, across Charity Pasture to Charity Pasture Corner where the course of the walk turns from south to east. 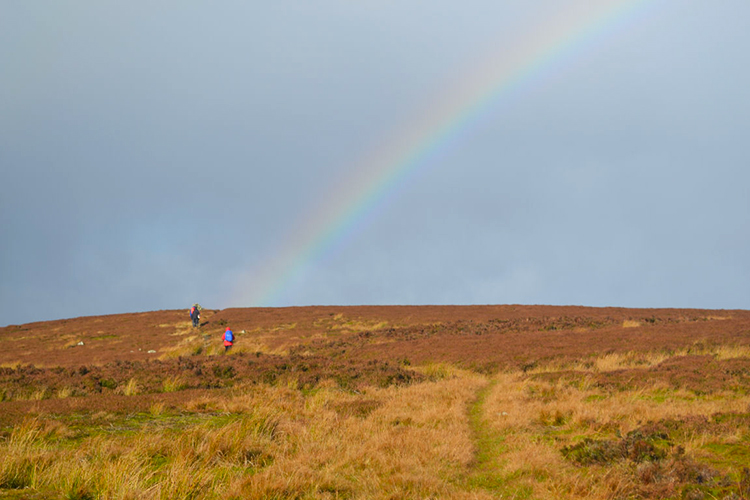 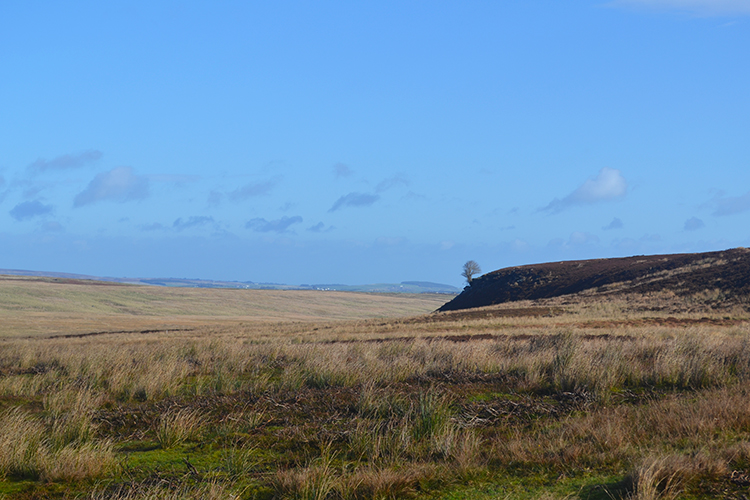 Bow Hills is reached and then the highest point of the walk by reaching the trig pillar at Citron Seat, 446 metres high. From here the choice is yours as the moor is quite easy going and there are number of tracks to follow including hard tracks from nearby Eller Beck Rigg to Roman Shrines, Scargill High Moor and to Spanham Scar. The hard tracks are primarily provided for Grouse Shooters but hey, they are fair game to us hikers too. Have a wander. 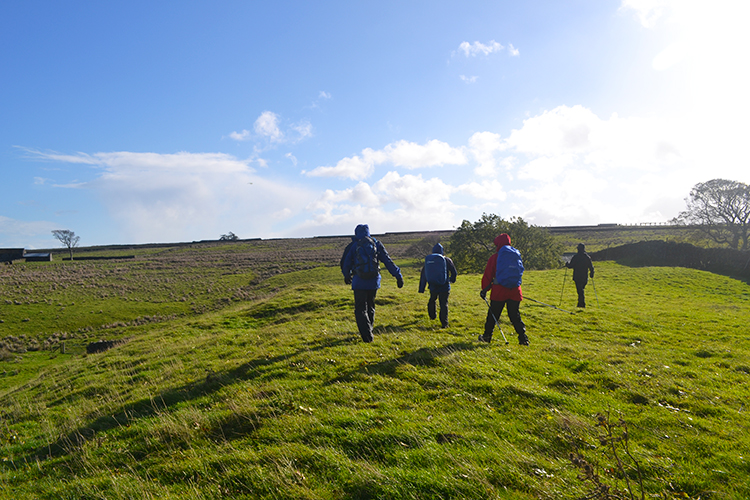 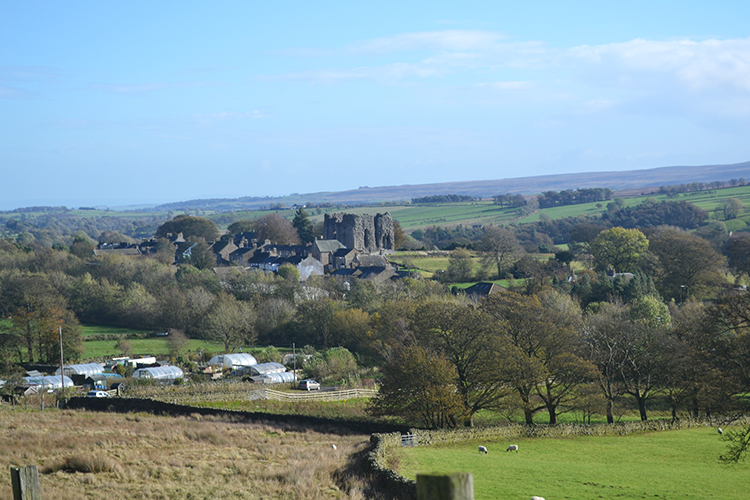 View to Bowes from Gilmonby

The marked route on the map and which is provided in the downloadable GPS and Google Earth files simply circles Gilmonby Moor in an arc east to south from Citron Seat to meet the Sleightholme Farm moor road and which then leads down into the hamlet of Gilmonby. The vantage points from elevation near Gilmonby provide great views of Bowes which are dominated by the bastions of the castle. From Gilmonby follow the road across the River Greta and back to the starting point of the walk in Bowes. 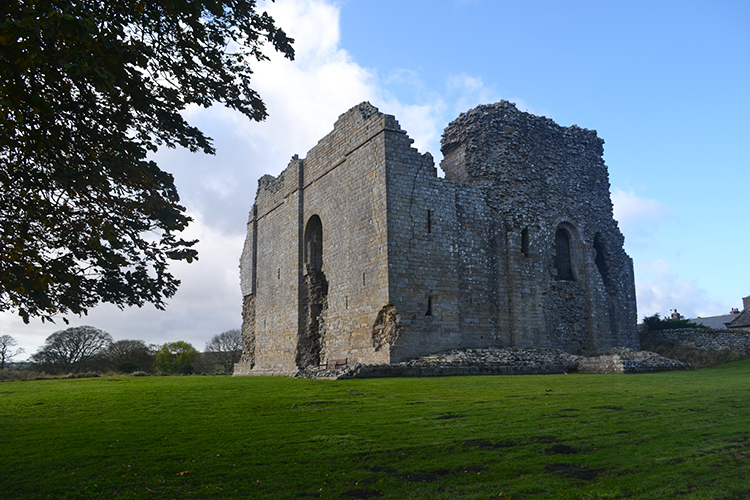 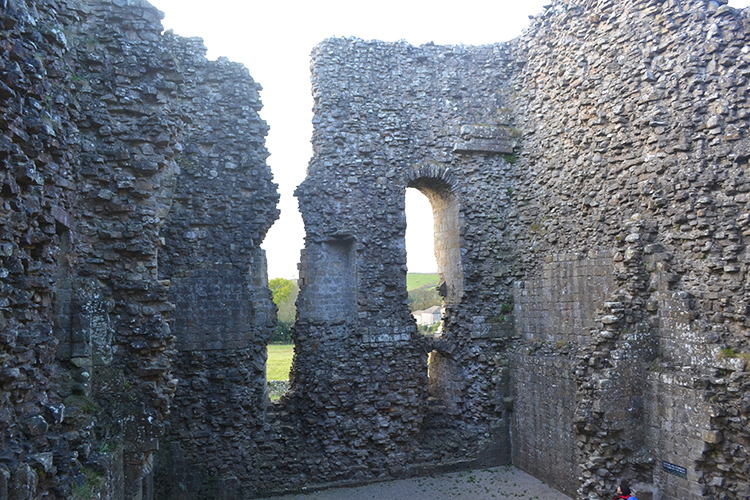 As a finale to the walk why not walk back along the village road to the castle and take a tour. Bowes Castle, as mentioned earlier is built within the original Roman fort of Lavatrae. It was first a timber castle which was later replaced by a more substantial stone structure in the 12th century. The stone masons did a good job, it has withheld attack from raiders, desertion by owners and ransack by locals since then and the main structure substantially still stands.