Summary: An invigorating upland walk across some of the best of the North York Moors. Parts of the Cleveland Way and Coast to Coast walk are walked on this 10 mile circuit which includes an explo0ration of the Wain Stones outcrop.

The Walk: There is nothing better than a moorland walk to welcome the new walking season. It was the 12th April 2014 and the daylight hours were getting longer. My friend Steve was up for the weekend from Rugby and with most of the team available we all agreed a weekend walk was a good idea. John had suggested starting out from Scugdale. "Where is Scugdale" I mused but once I had found it on the map I knew designing a good circular walk of around 10 miles would not be a difficult task. And after spending a short while scanning the relevant North York Moors Explorer map and picking out a few points of interest here it is. 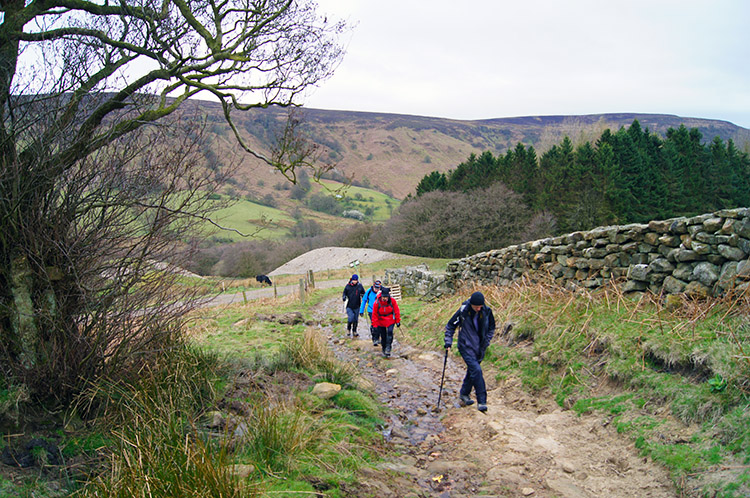 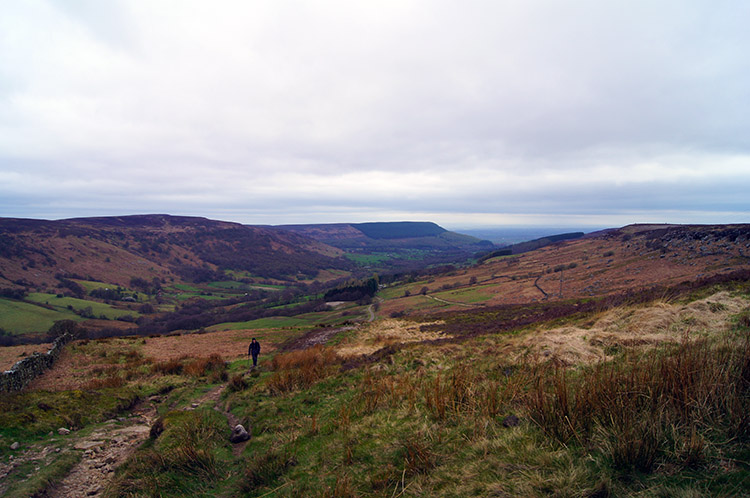 Looking back down to Scugdale

We had a good turn out for the first team walk of the year. It was all the usual suspects - Dave, Jez, Steve and John accompanied me as did John's wife Joanne. We began by heading out of Scugdale from near the hall on a course east parallel to Barker's Crags to our north. We would enjoy a visit to the crags on our return to Scugdale. For now we left them behind climbing out of the dale towards Stoney Wicks. It was a steady climb, enough to get the aerobic exercise under way. 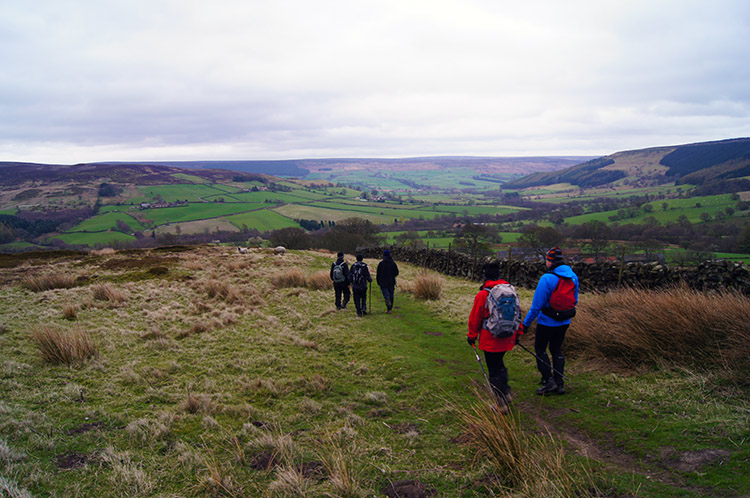 Looking to Raisdale from Stoney Wicks 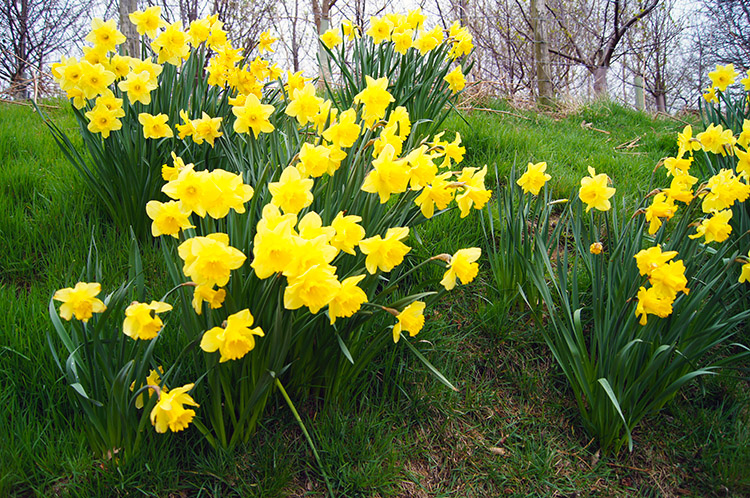 We reached the crest of our first summit which is a long ridge extending from Barker's Crags in the north to Noon Hill in the south. It is appropriately called Barkers Ridge. On this first crest we had climbed around 100 metres which gave us a good view back to Scugdale and to our course ahead into Raisdale. The only shame was we had to lose the height we had just gained and about 40 metres more descending to Raisdale. But the wide green dale did look inviting and so down we walked downhill into the dale via the upland point of Stoney Wicks to Raisdale Mill. The shelter of the valley displayed lovely arrays of blooming Daffodils I always think Snowdrop, Crocus, Daffodil, Bluebell, the four beautiful clarions of impending summer. 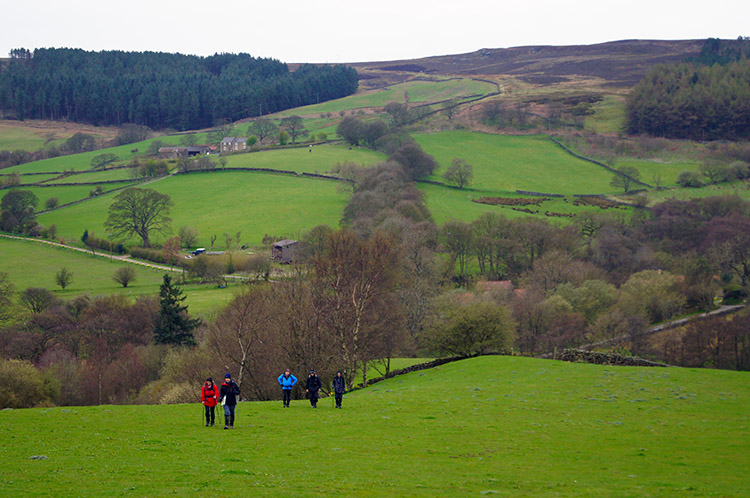 Climbing from Raisdale to Cold Moor 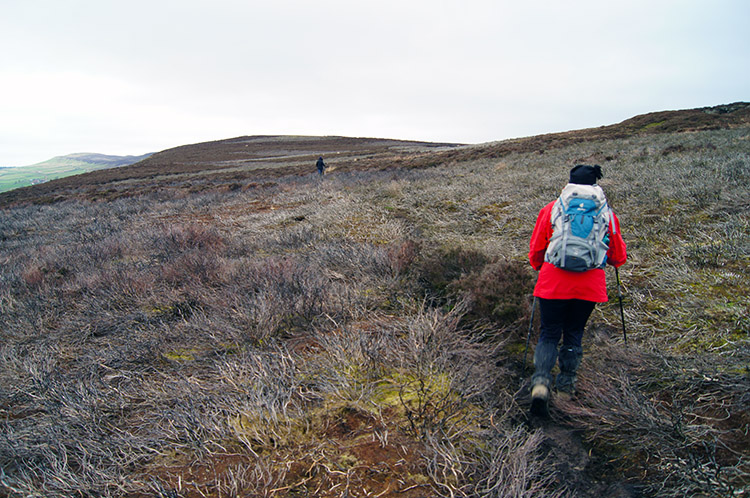 Heading to the top of Cold Moor

Raisdale Mill once had a waterwheel in its working days but is now a series dwellings constructed of converted buildings. It is a very peaceful place cut off from the modern world by a single access road coming off Raisdale Road which does not go anywhere really. We walked along the road for a distance of about 200 metres from the mill before climbing a field to Stone Intake and then along the road a little more before beginning the climb to Cold Moor. We never met a car during the road walk and never heard or saw one either during our climb out of Raisdale to the moor. The was little breeze either with our surroundings being quiet enough to hear a pin drop. We could soon hear our own breaths though as we climbed 150 metres of ascent onto Cold Moor. At least this time the ascent was not followed by an immediate descent. We had a upland crossing of Cold Moor to enjoy for the next mile and a bit. 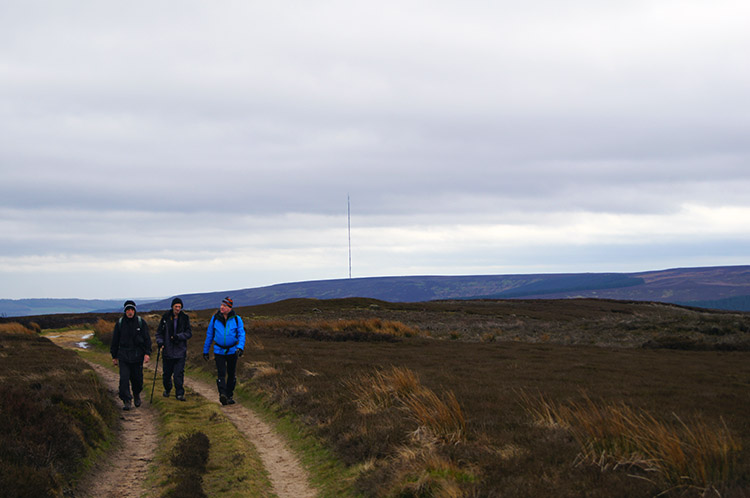 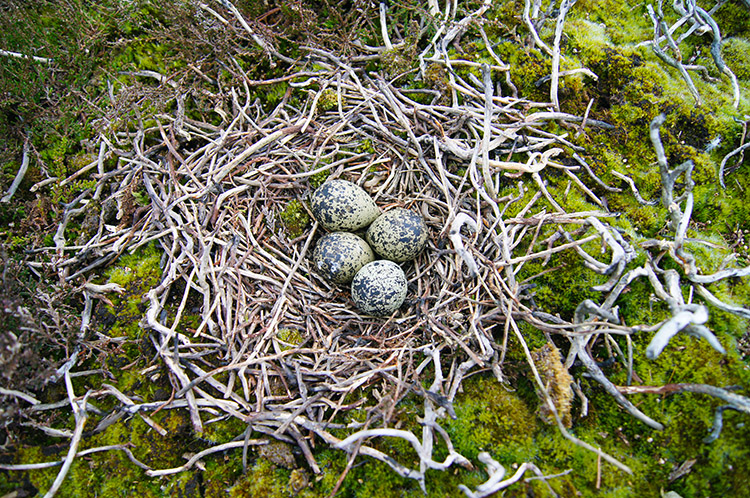 Height gained onto the North York Moors, a time to converse and enjoy the walk proper. The flat tables of many of the North York Moors of which Cold Moor is a typical example allow time to fully take in the surroundings. Big skies prevailed as we walked across the moor and though today's sky was predominantly grey it did show the odd sign of brightness coming through and the odd patch of blue to the north east. Some of the moor heather had been burnt back, a common moorland practice to stop gorse, birch and scrub establishing. Apparently it is ideal habitat for Grouse though the bird with a completely exposed nest which we came across may not have thought so. Then again, it chose to nest there. We left it alone. 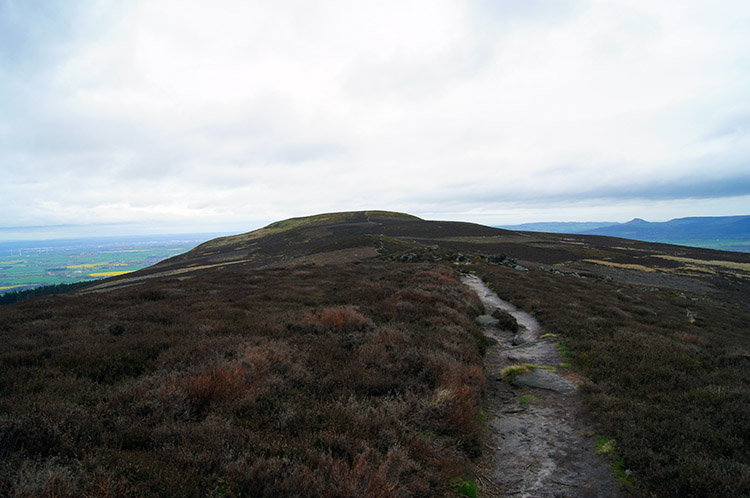 The view north along Cold Moor 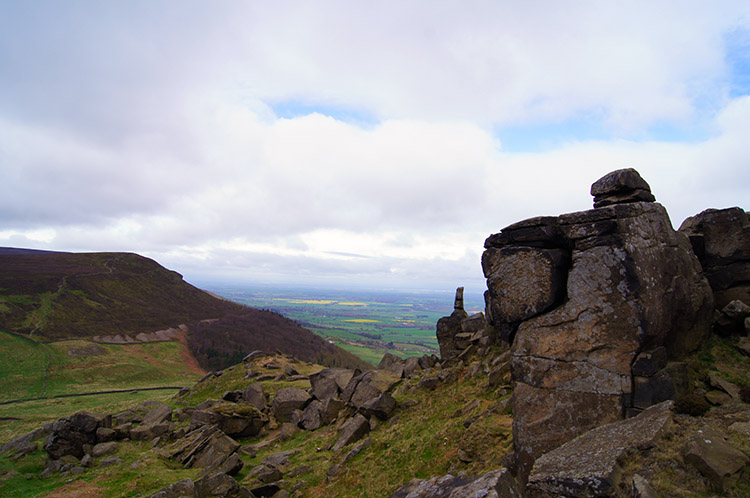 We continued our crossing of the whaleback of Cold Moor. Behind us we could see the Bilsdale Transmitting Station with its 314 metre high mast. In clear conditions it is a reassuring reference point and navigational aid. In the mist it could be a hazard for low flying aircraft and helicopters but it has been fitted with aircraft hazard lights. My objective was not the mast though, it was south and I was heading north east off Cold Moor and across Garfit Gap to Wain Stones. My colleagues forsook the adventure and continued on Cold Moor due north. I agreed to meet them later at Lord Stones Cafe near Carlton Moor. 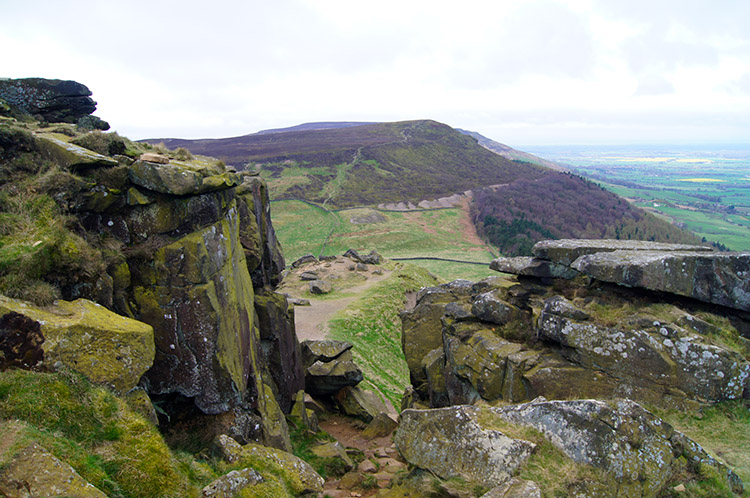 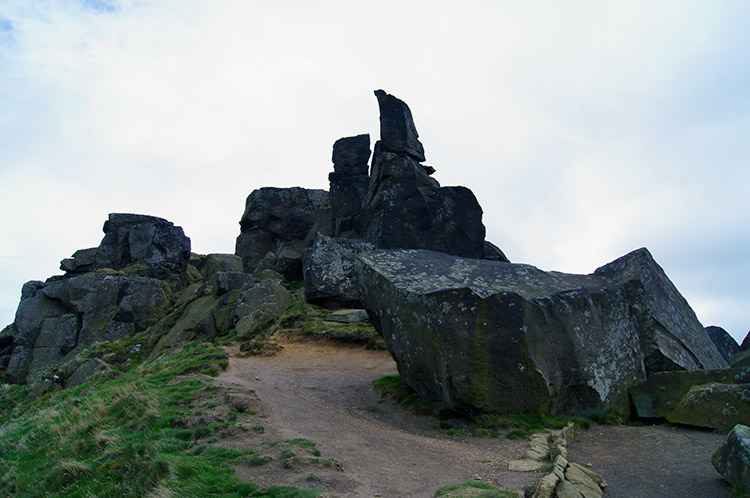 I scampered off Cold moor and across Garfit Gap before climbing Hasty Bank to Wain Stones. I had been here twice before, on my two Coast to Coast trips but with itineraries to chase I had not spent nearly enough time exploring the outcrops and interesting features of the rocks, some of them laid out flat and some in gravity defying upright pinnacles. I first explored to my right and then rounded the crest of the Wain Stones looking out over the top of them to Cringle Moor. I imagined my Coast to Coast walks as I did so, the first in 1994 being my life changing event which hooked me on outdoors walking and long distance trails. I then walked all the way around the Wain Stones and climbed down to the footpath which passed through the middle of them. I stood on the very path I stood on almost 20 years earlier on that life changing and unforgettable 12 day pleasure of a country crossing which was my first long distance walk. 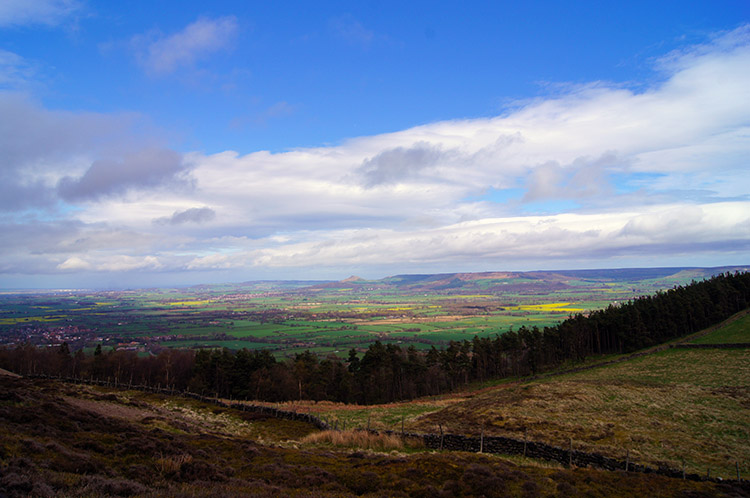 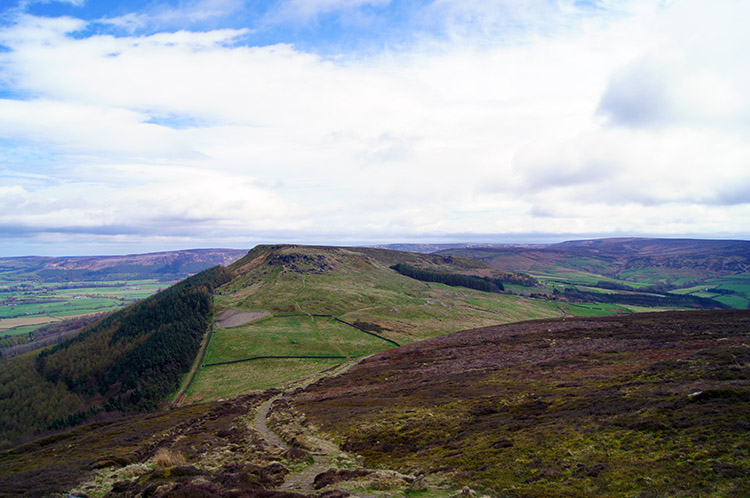 The view from the Wain Stones was much as I remembered it from that day all those years ago, great moments never fade. The grey sky that persisted over the moors was broken up by blue skies over the Vale of Mowbray. My homeland basked in sunshine. It even managed to reach me on the edge of the Cleveland Hills though only fleetingly, the sun disappearing from my vicinity soon after it had pierced though. Nevertheless my happiness was undiminished as I walked briskly down from Wain Stones to Garfit Gap and then straight up again on the roller coaster ascent to Cringle Moor. 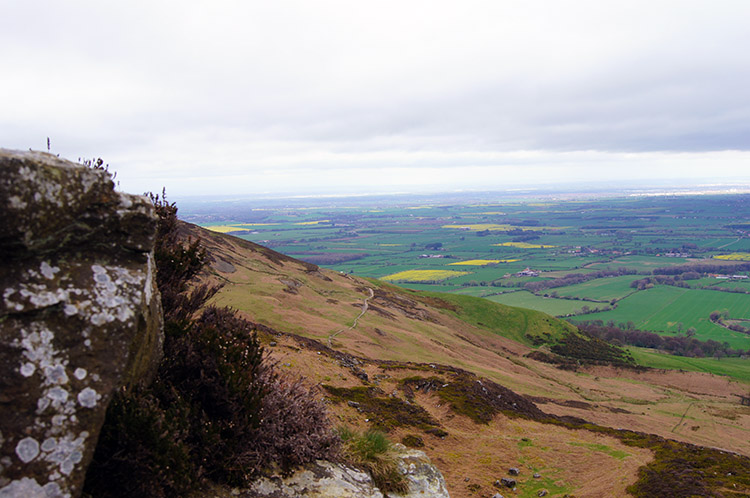 My lunchtime view on Cringle Moor 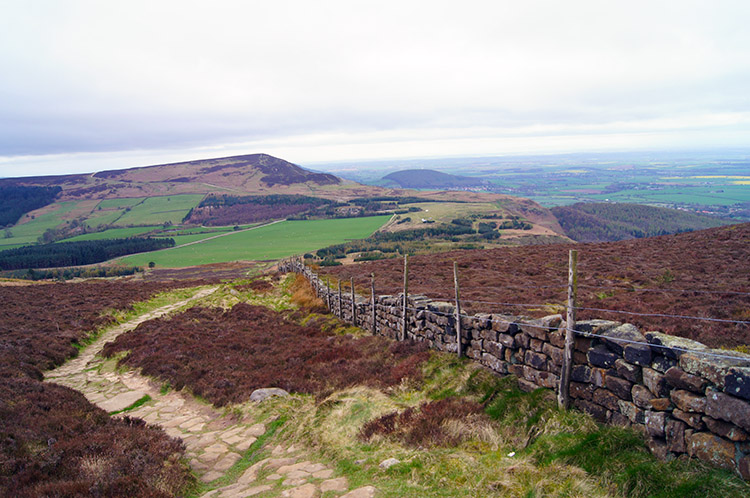 I stopped my climb halfway up the ascent of Cringle Moor, unable to hold off the pangs of hunger. It was now afternoon and I needed to replenish energy stocks; I had hoped to have lunch when I reached my colleagues at Lord Stones but I could wait no longer. And I had the perfect viewpoint to enjoy lunch, looking out off the edge of the moors to the tapestry fields of the super flat farmlands of the Vale of Mowbray. Even in the first half of April some fields were brilliant yellow with Oilseed Rape. With lunch over I gave up my lovely view and completed the climb onto Cringle Moor. I followed the moor top path to the panorama viewpoint overlooking Dromonby Bank where I had lasted visited on my second Coast to Coast walk in 1999 with Deke, Jez and Chris. After pausing for a moment ad looking out from the very spot once more I walked on and down from Cringle Moor to meet the gang at the Lord Stones cafe. 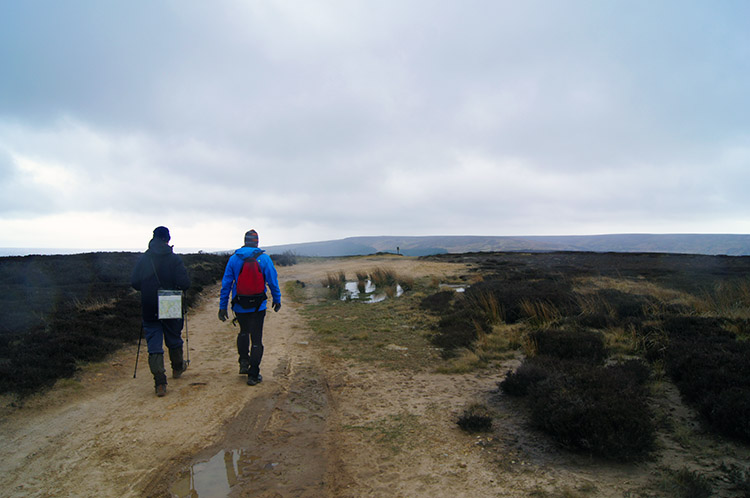 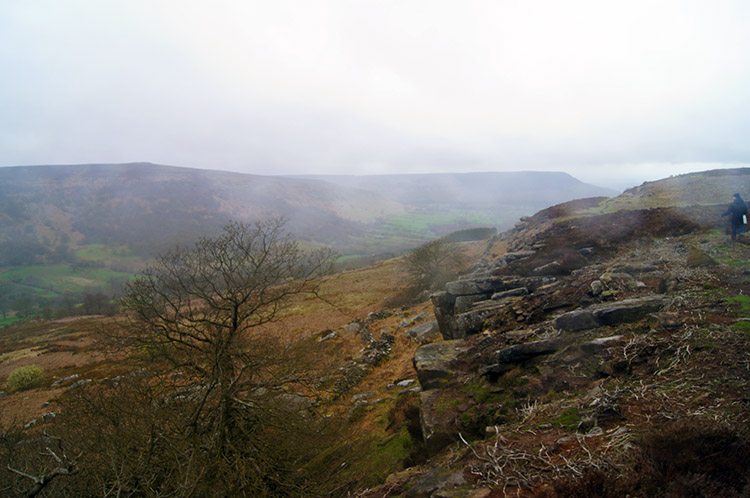 The team were just finishing their lunch as I arrived. From Lord Stones we left the course of the Coast to Coast/ Cleveland Way to track due south onto Bilsdale West Moor. Like Cold Moor it is a tabular topped moor stretching for miles to the south across Barkers Ridge which we had crossed earlier on in the day. Remember it was our first climb of the walk. We followed a good wide Bridleway on to the moor and across it to Brian's Pond before leaving the wide track and following a narrow path to Barker's Crags. We crossed from east to west over the crags and ahead of us spotted some people with coloured mattresses. They were scrambling up the crags and using the mattresses for soft landings should they have a mishap and fall off. 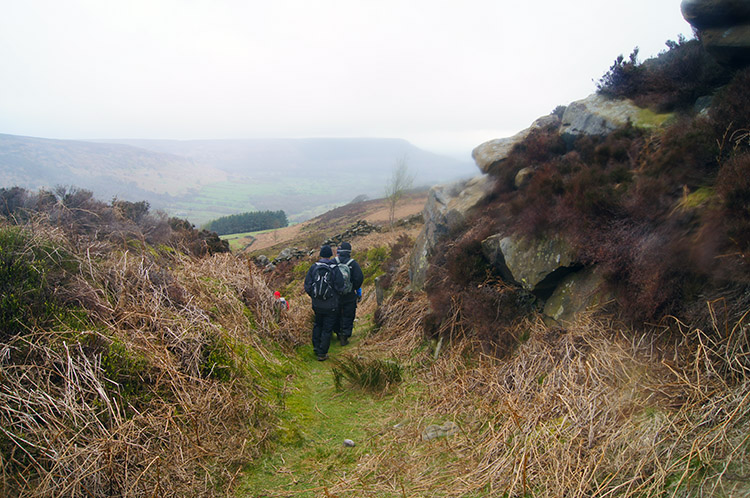 From Barker's Crags to Scugdale 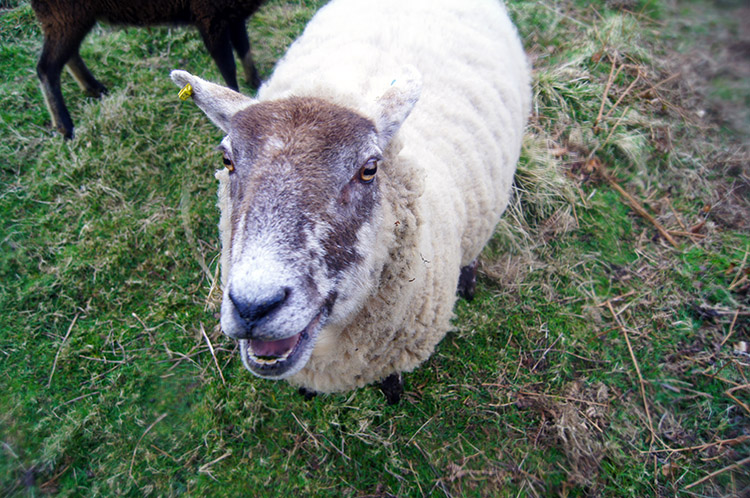 Rather than risk injury ourselves we carried on with our safer option and walked along the crag top at a safe distance from the edge until we reached a safe point to scurry down through the crag on a defined path. Then we continued walking down, now below the crags, to Scugdale and back to our starting point. On arrival back at the start a sheep bolted out and greeted us with a "Welcome back" bleat. How nice! It had been a great day out on the North York Moors. And my 'things to do before I cannot walk no more 'Wain Stones exploration' had finally been ticked off. As well as my solo effort to the Wain Stones I expressed thanks to all for the great company on the rest of the walk. Perfect.