Summary: This walk is very much a return to my youth as I used to play and explore on the moors close to the village of Osmotherley which I know very well, it being just six miles from my childhood home near the town of Northallerton. I had friends in Ossy, as we affectionately called Osmotherley and we would explore together in my teenage years. This walk leaves Osmotherley by following the moorland road leading to Hawnby, turning off to pass the reservoirs of Oak Dale which lead to Square Corner and on to Osmotherley Moor. From the moor the walk drops into Scugdale before climbing through Claim Wood to Scarth Wood Moor and Cod Beck Reservoir before descending back into Osmotherley. 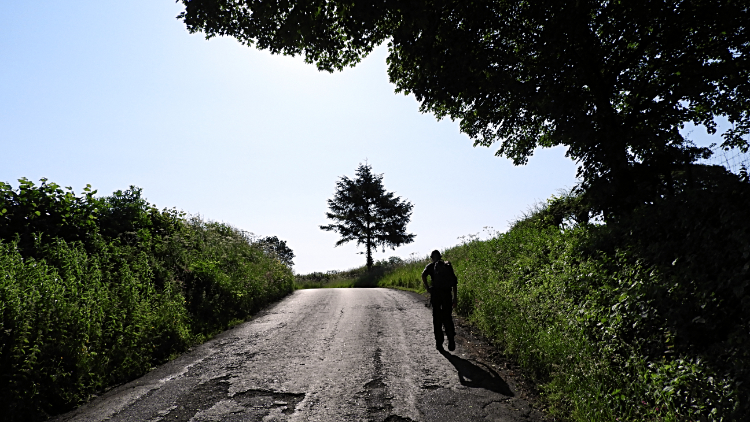 Climbing up the road from Osmotherley 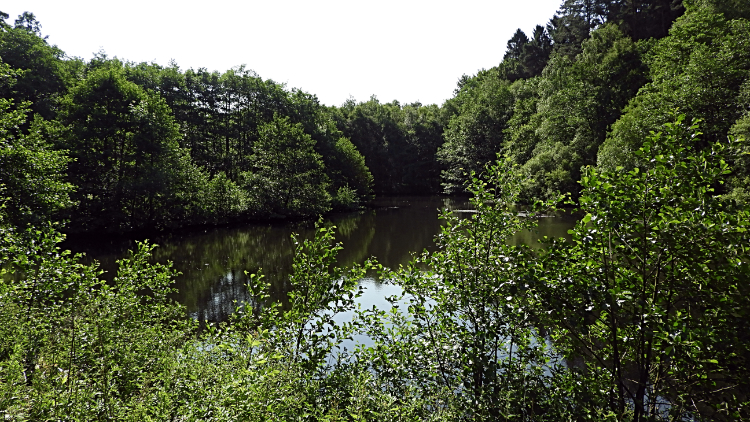 I was joined on the walk by Dermot Blaney from Middlesbrough. Together we set off from the village center of Osmotherley, following south end downhill to cross Oakdale Beck and then uphill for fifty steep metres to join the Cleveland Way footpath leading southeast along a bridleway towards the Oakdale reservoirs. It was a lovely hot and sunny day, just three days beyond the summer equinox. Therefore, at just eight o'clock in the morning the sun was already beaming down from high in the sky. Turning from our true walk path for a short while we turned right to take a peek at Oakdale Lower Reservoir. Nostalgia flooded back, teenage memories of coming here and playing adventurously. It had been a long time since I had last visited. Almost half a century. 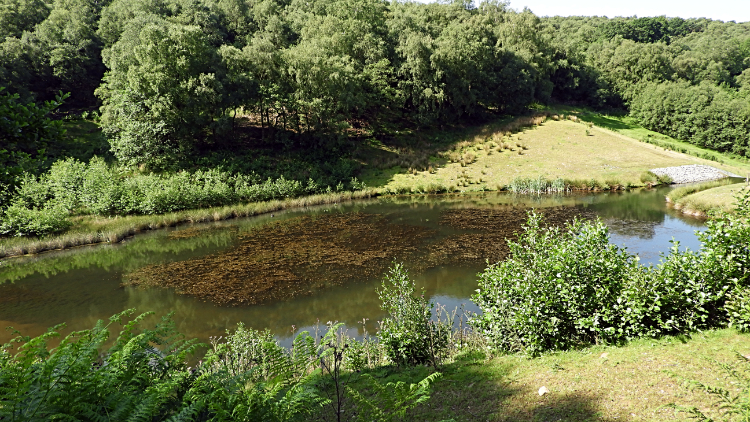 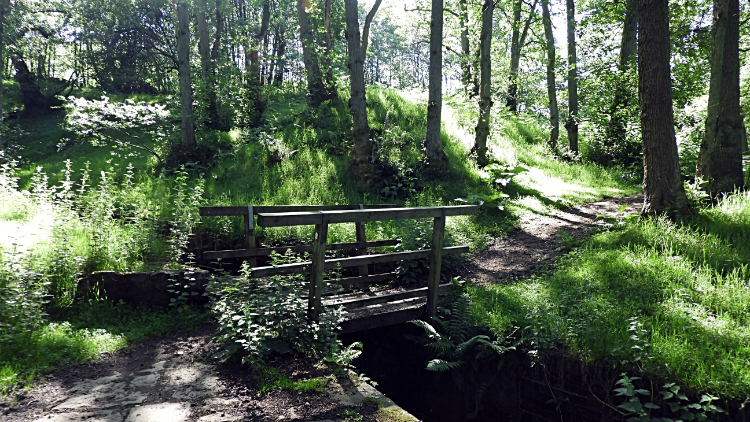 The Cleveland Way footpath continued from Oakdale Lower Reservoir to pass above the north side of Oakdale Upper Reservoir. A Yorkshire Water worker was parked up on the track side and we stopped so I could chat with him for a while. Being ex Yorkshire Water myself I wondered if he knew of some old colleagues I knew. During the chat I mentioned how lucky he was to have such a job with lovely places to work. Just as I did when an inspector for West Harrogate in the 1980's with a patch to cover which included the Washburn Valley reservoirs of Thruscross, Fewston and Swinsty. Moving on, Dermot and I briefly dropped into lush woodland where Jenny Brewster's Spring flowed through to the reservoirs. Crossing the water by way of a small wooden footbridge we then began the main climb of the walk. 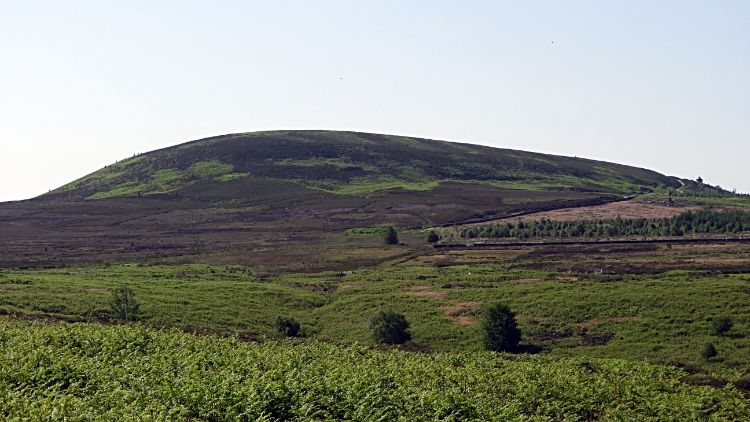 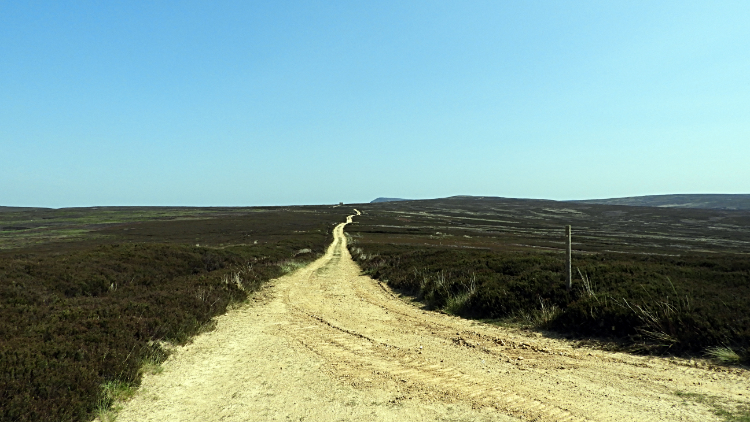 Up to the moors we hauled ourselves, first by a paved path, surrounded by ferns on either side, up to the ever popular car parking area at Square Corner. Still not yet none o'clock in the morning there were a few other walkers already about around here and when we reached Square Corner I counted a dozen cars. Just about the full capacity for the parking area. You need to be early to get prime parking here. Square Corner is a lovely spot to dwell with the rounded hump of the north face of Black Hambleton in close attendance to the flat moorland to the north. Moorland Dermot and I were now going to cross. First up we had a short roadside walk from Square Corner to the site of Robinson's Cross. The Ordnance Survey map indicated 'remains of' but we could not find any remains of the cross. Not for the want of trying. All we found was a boundary stone marked with an M. It was not to be the last. A few steps along the road from the boundary stone led us to the point where we left roadside and tracked across open moor, generally northwards by way of Whitestones Ridge to Miley Pike Hill. 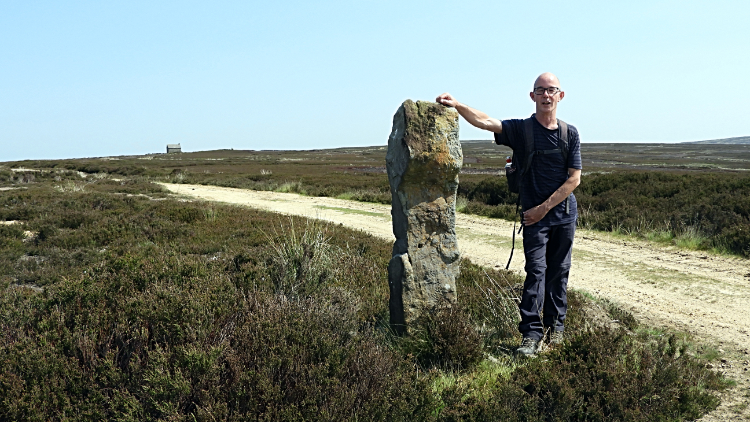 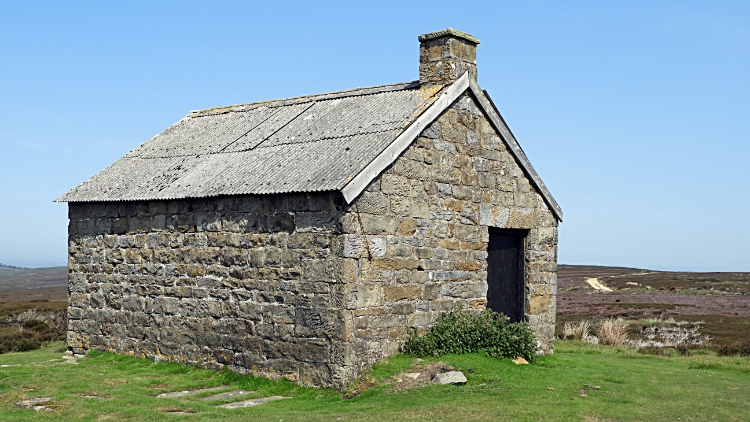 Miley Pike Hill was not a hill in any description I know. More like a raised hump on the moor like the centre of a dinner plate turned upside down. The climb to it was up fifteen metres or so in a kilometre of walking. Dermot nor I noticed the gain in height at all. We chatted freely over the crossing by track of Osmotherley Moor, the only points of interest being the standing stones passed along the way. Most we would come to were boundary stones marked 'BS' on the map though some had other associations. Faber's Stone was one. Located at the high point of our walk, 320 metres high on Leystone Ridge and thus the conclusion of our 200 metre climb from Oakdale Lower Reservoir, the stone provided a good vantage point. We could now see the tops of some of the highest Cleveland Hills peeking out to the north-east. We could also see a building shimmering in the high heat which we were now enjoying. It was t-shirt walking from now on. We closed in on the building, directly on our walking line. Shimmer of mirage changed into definition of reality and true enough we next arrived at the door of Swainby Shooting House. 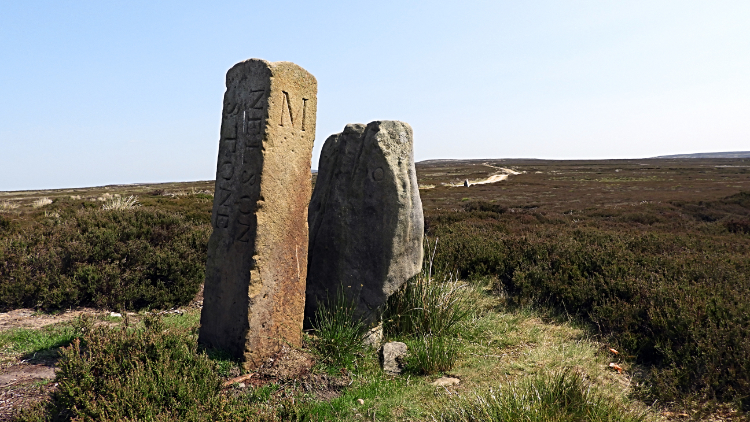 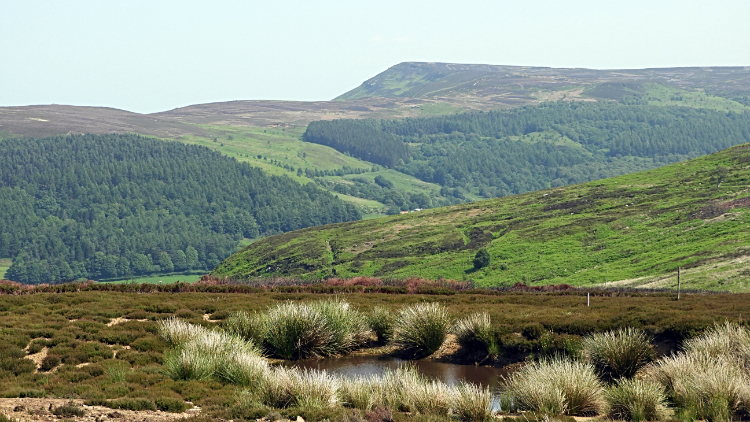 View to the Cleveland Hills

Near to Swainby Shooting House I noticed a couple of stones standing. I walked over to them noting one was a boundary stone with the letters A and M marked on it and Nelson Stone written also, indicating the title of the older stone. The older Nelson Stone was still in situ a month after our visit but it seems the boundary stone had been felled (13th July 2020). Why, I do not know but by investigating further I have found John Hunter's reports on the megalithic portal fascinating. Why the boundary stone comes and goes.... no idea? By the way the boundary stones markings usually indicate landowners shooting rights though they also often serve as unitary county boundaries. The letter M we were seeing were for land owned and managed by "Manners", the family name of the Duke of Rutland. The letter A remains a mystery. Even John Hunter did not know. Continuing on our walk Dermot and I continued, now falling slowly from Osmotherley Moor to Stony Ridge where the views to the Cleveland Hills were becoming clearer. And very appealing views they were. 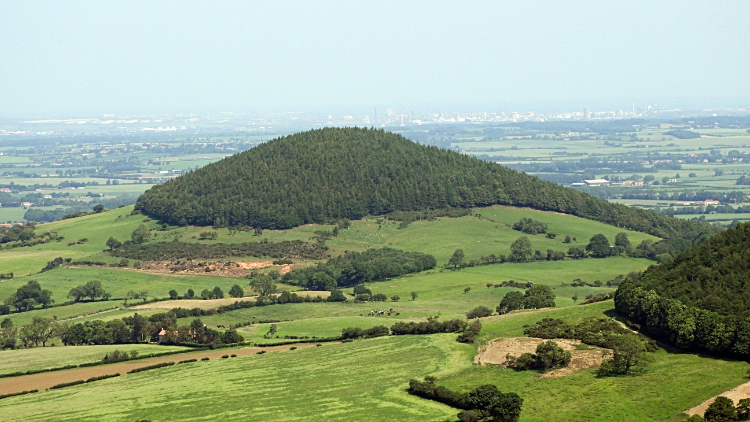 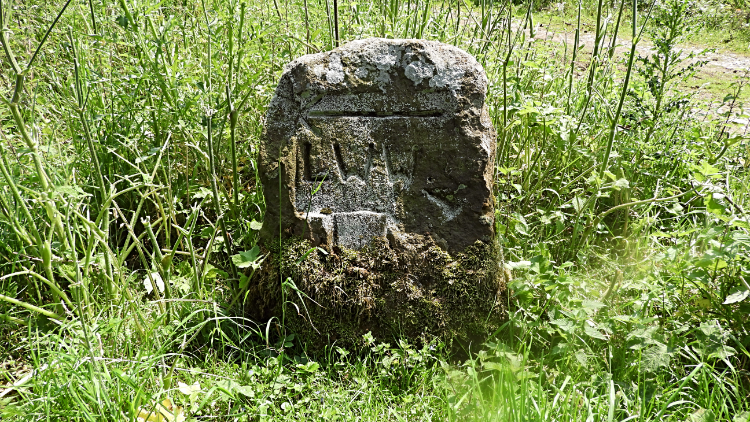 From Stony Ridge we made a very steep descent through plantation to Scugdale. Before entering the woodland a very pretty picture of pudding shaped Whorl Hill was presented, framed by the Vale of Mowbray and backed by the megalopolis white factories and smoking chimneys of industrial Wilton Works straddling Middlesbrough and Redcar. Part way down the plantation a sign said 'no entry' but we were too far in so we kept going. There was no one about and we were doing no harm. I also checked the map and noted we would soon rejoin the Cleveland Way at Round Hill. So on we went to permissive walking once more. A Lyke Wake Walk marker stone marked our arrival into legality.

'Note: The maps, route files and statistics show the alternative permissive route following Piper Grain to Harfa Bank Farm on on to Scugdale. In retrospect I wish Dermot and I had taken that way'. 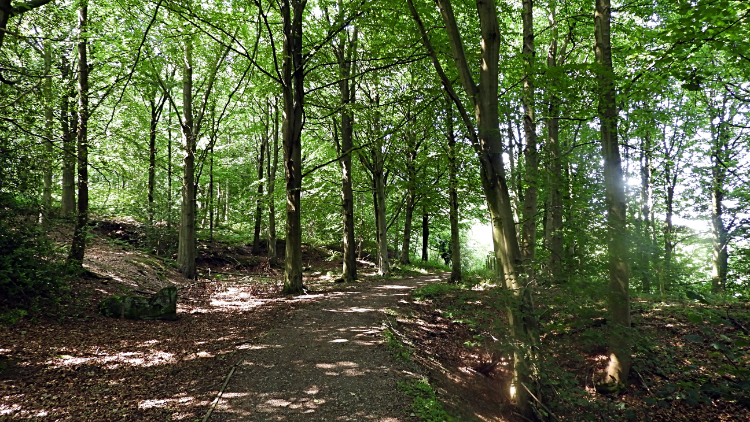 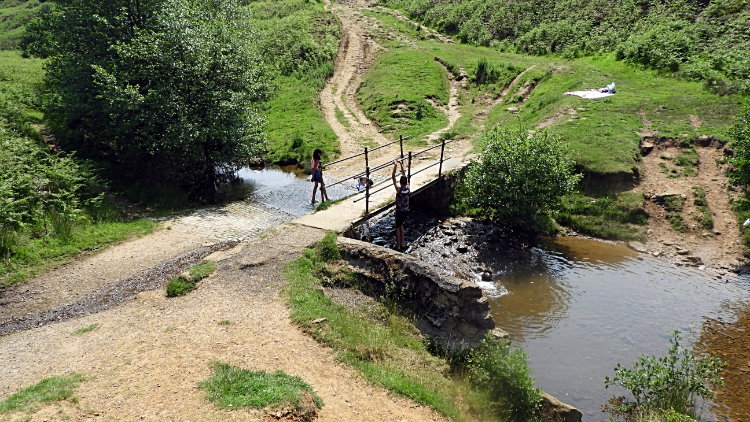 Back on the Cleveland Way we climbed a steep stepped path for fifty metres of stairway ascent from Scugdale to the top of Round Hill. We were pleased the climb was in partial shelter of trees in the east side of Clain Wood. Once at the end of the stepped climb on Round Hill we found a bench set in a clearing by the tree tops which was the prefect spot for our lunch break. So we dropped our backpacks, took out our refreshments, sat down on the bench and chilled. It was only eleven in the morning but we had been walking in the hot unrelenting sunshine for a few minutes over three hours, in doing so covering eight of our eleven miles. That had been good going so the fifteen minute break was well deserved. After the break a bit more climbing through Clain Wood was necessary to reach the Swainby to Osmotherley Road but at least the ascent was less severe than that before lunch. At the road I told Dermot of the tale when as a teenager on my first motorbike I was climbing from Swainby on this road when a Bee or Wasp flew inside my helmet. I threw myself off my bike to get the helmet off but not before the critter stung me on top of the head. Yes it stung. The memory still hurts. A while walking along the road from the site of my old agony brought us to Cod Beck. 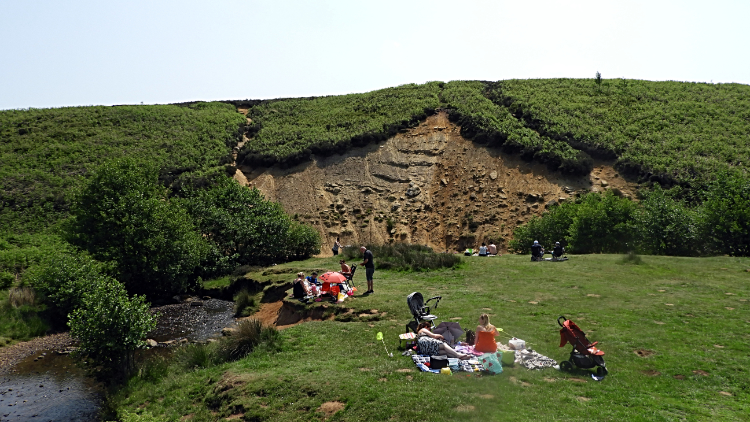 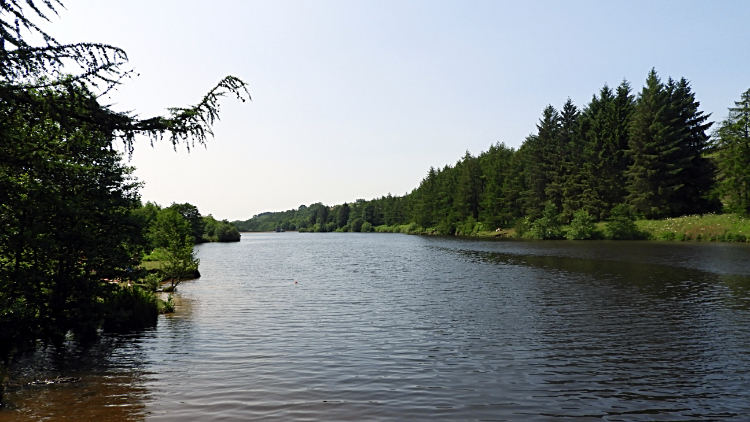 Cod Beck is a scene of many childhood memories, nearly all of them making me smile. In fact all of them, it was a halcyon childhood and here mum and dad would bring young me, younger Dave and toddler Ray to have Sunday picnics beside Cod Beck. We would paddle in the beck and sometimes be brave enough to climb the low slopes on to the moor, exploring the nearby paths and playing hide and seek in the high fern and heather. It was idyllic. Oh I wish I could turn the clocks back to those days of the early 1960's when life was easy and without a worry. Today, nearly sixty years later people were doing exactly as we did. It was magic then. It was magic now. As Dermot and I ambled all the way from the Cod Beck footbridge to the north end of Cod Beck Reservoir I smiled. Everyone was smiling. Next up for us was an enjoyable walk along the path on the east side of Cod Beck Reservoir. More people were smiling by the reservoir side too. While ambling and not doing much else. 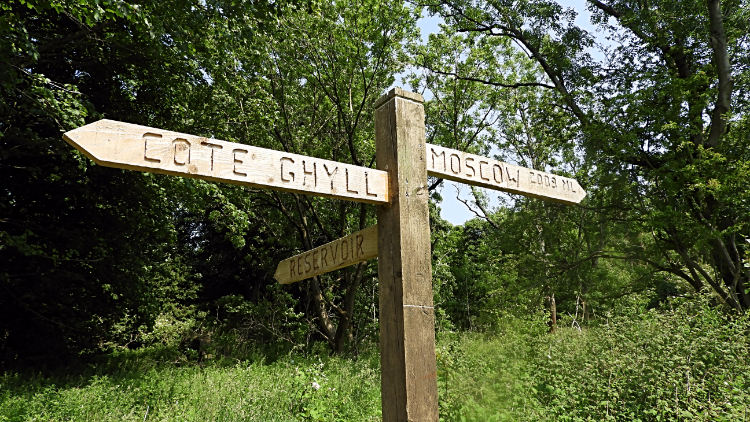 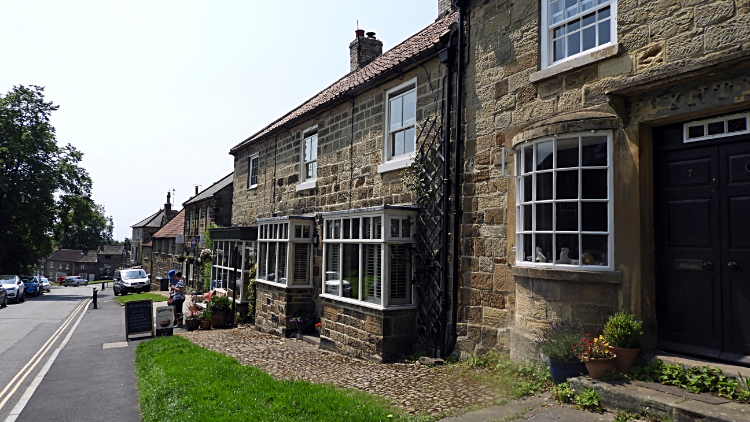 From Cod Beck Reservoir the final stage of the walk led us on a woodland path to first Cote Garth and then to Cote Ghyll Mill Youth Hostel. At a junction of paths along the way a way-sign showed our direction to the youth hostel while the opposite direction post read 'Moscow 2009 ML'. "Not today" I thought. At Cote Ghyll we stood on the road bridge over a weir to watch a Dipper diving in and out of the water for five minutes before climbing to the road leading down to North End and back into Osmotherley. It had been a fine walk, full of interest and my new acquaintance Dermot had been fine company. It was a good day.