Summary: This scenic walk which features the Derwent valley and the countryside on the south-east edge of the Howardian Hills begins at Kirkham Priory which is situated beside the River Derwent. After crossing the river the walk climbs through Oak Cliff Wood and continues by quiet country road to the village of Crambe. Next countryside is crossed to reach Barton-le-Willows, the second village of walk. From the village more rolling countryside leads back to the River Derwent with a spur taken to visit a fabulous heritage mill, after which the course is reversed and heads back along the river all the way to finish back in Kirkham. 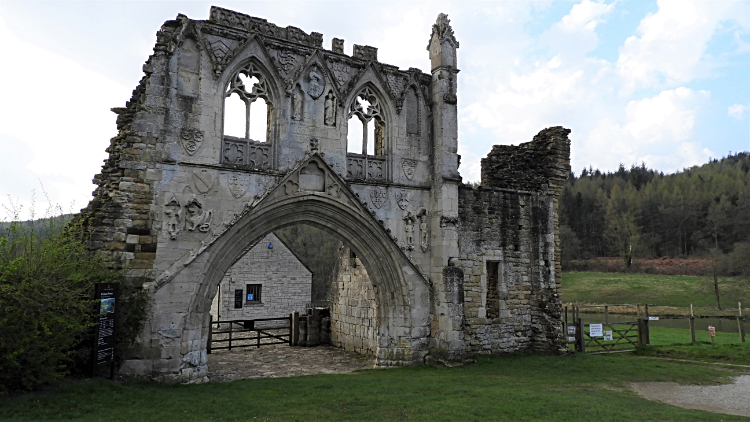 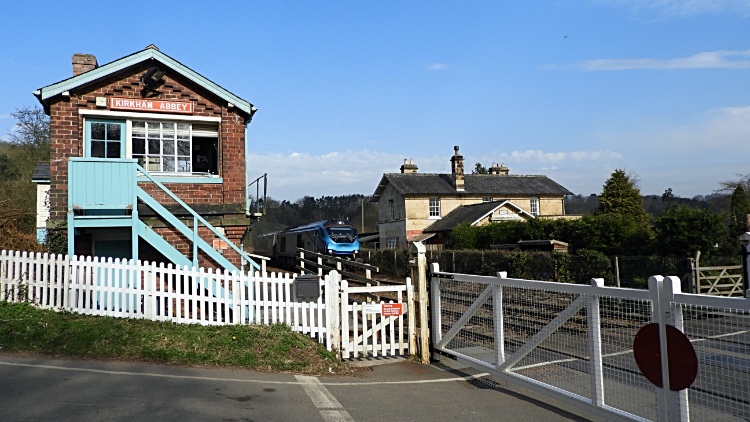 The promise of the warmest day of the year so far, a balmy twenty two degrees centigrade on the last day of March, had me getting up at the crack of dawn, quickly eating breakfast, packing lunch, getting my gear together and driving the 34 mile/ one hour journey to the village of Kirkham. After enduring a bit of traffic congestion while getting around York I had arrived, parked up in any parking place I wanted at Kirkham Priory and walking. It was 8.50am. The only sounds of this particular early spring morning were that of the waters of the River Derwent flowing under Kirkham Bridge and those of the local birds singing their morning chorus. It was wonderful. After crossing Kirkham Bridge I crossed over the York to Malton railway line. Moments before the railway crossing gates closed. Standing beside Kirkham Signal Box I watched the 8.55am train pass. Next stop for the train was York. 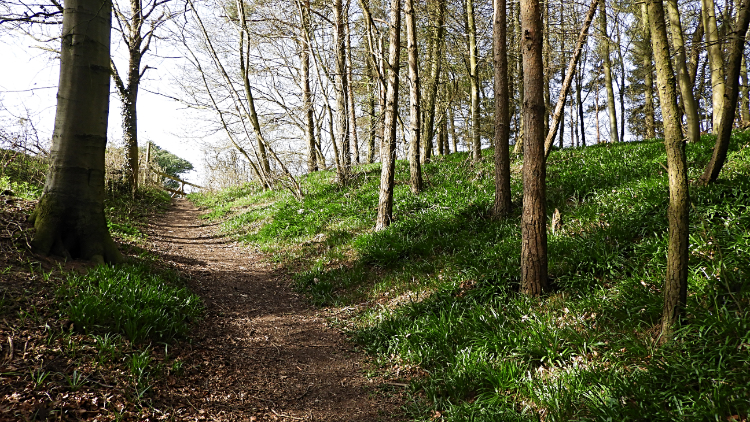 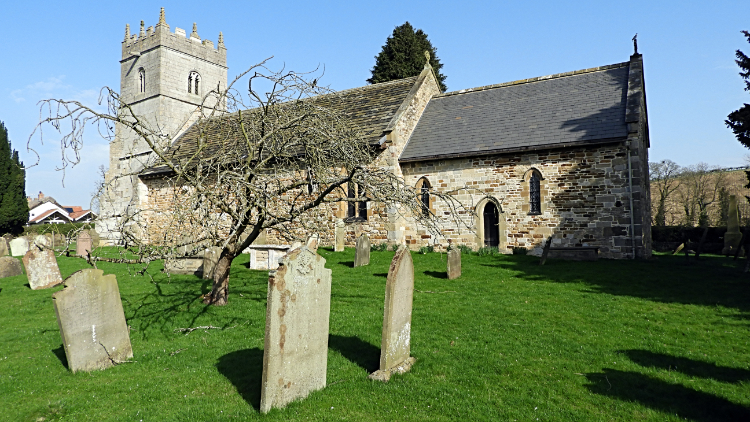 Any lethargy I retained of the early day was quickly eradicated by the short steep climb through Oak Cliff Wood. Fifty five metres of climbing during which I huffed, puffed and gasped hands on knees while resting woke me to the day. And what a day it was. Everything promised by the weather people had materialized. At the top of the greening woodland I stepped out into the open at the high point of a country road with my observation looking down the road towards the village of Crambe. It was a beautiful sight, entirely still. Completely still as if the day had not yet started in this sleepy place. It seemed I was the only one on the move as I ambled down the road into the pretty village of Crambe. Not a car passed though once I was in the village the local postman arrived in his van. Postman Pat? I tarried in the village, admiring the church and the pretty houses either side of the single street which is the village. 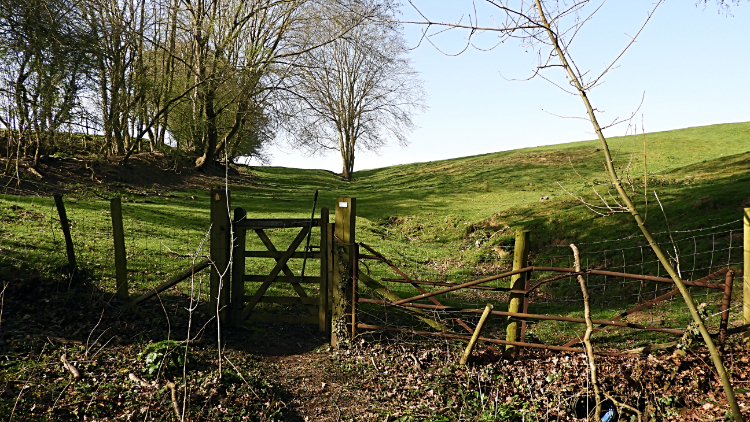 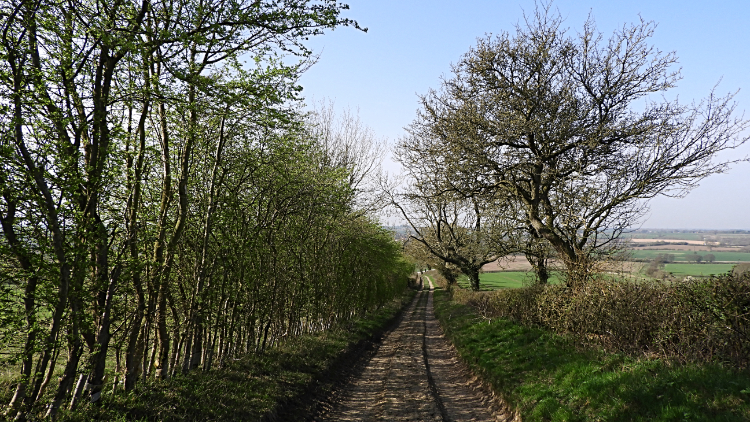 I left Crambe by walking along the street and turning into a garden, passing a vegetable plot and a couple of old tractors which led to a paddock field, it leading down to a beck feeding the River Derwent. Unknowingly I would pass the beck as it discharged into the river later on. On crossing the beck by a footbridge I then climbed by a field and then climbed by a farm access lane. It was my second and final climb of the walk, just a tad over thirty metres to ascend Crambe Bank. With practically all the climbing of my day done I strode purposefully down the farm lane, hawthorn hedgerows on either side beginning to break out in new season green colour. The higher trees beside still had a while to wait. From the hilltop I enjoyed a super long distance view to the flatlands beyond the south edge of the Howardian Hills. The railway line I had crossed in Kirkham at the start was looping back to me. After a full 180 degree half circle turn I was to cross it again. Just after descending the hill and crossing a big flat field. The old station house gardens were full of colour. Prolific pink blossom of early flowering Cherry and full vibrant yellow of a flowering Forsythia. It was a feast for the eyes. 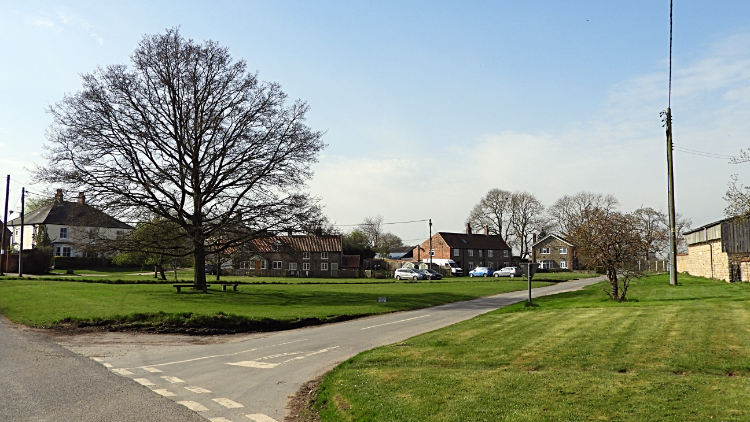 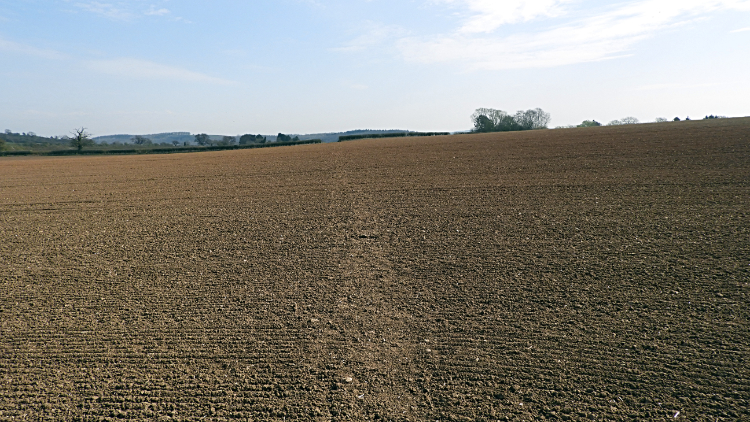 The path across the fields

From the station house I crossed Spital Beck by way of Barton Bridge and from there I followed unmade Back Lane to arrive in Barton-le-Willows. I was greeted into the village by a lot of honks from some of the pigs in an open paddock at a large pig farm. After the honks of those outside I passed a large barn housing more pigs. There were more squeals than honks inside. Lots of litters no doubt. Once past the animals and into the village it was almost as quiet as in Crambe earlier. Now though at a little after ten in the morning a few local residents were out walking their dogs. I found a bench in the village and watched the stirrings, chilling out for ten minutes while eating a Kit-kat and taking a drink. As for the dog walkers, they strolled. No one was in a hurry. It was not a hurrying kind of day, everyone enjoying the first kisses of warm sunshine after a long winter. 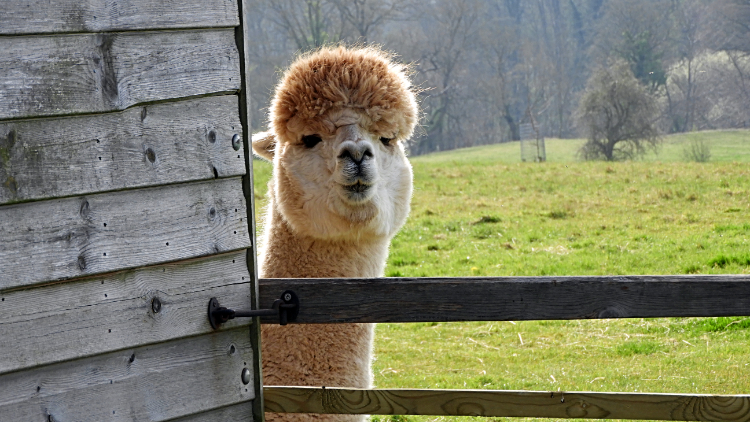 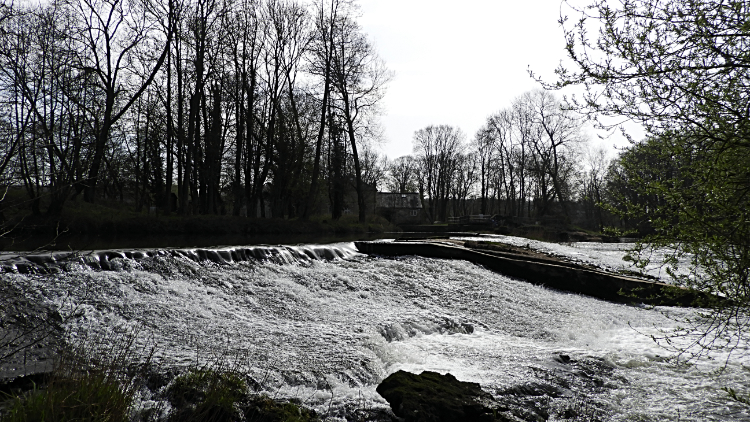 After my refreshment break I ambled away from Barton-le-Willows, first by road but soon leaving the tarmac to follow fields in an east direction towards Crambe Grange. On the way I crossed Spital Beck again, this time by a footbridge. Immediately afterwards I crossed over the middle of two recently ploughed fields. Other walkers footprints helped me keep to the line, straight across the ploughed furrows. After the fun of treading the tilled soils I was back to a field edge walk, now hemmed in by a fence leading me around a field to reach Crambe Grange. At the grange I was being closely monitored. From hiding behind a barn the watcher showed its face but kept its eyes fixed on me as I walked past. It was a Fowberry Alpaca, one of the very best. I have to say, it was a fun encounter. I did stop and speak to it. While doing so its fixed gaze never wavered. From Crambe Grange I dropped fifteen metres down a path to cross a road and follow a field to reach the River Derwent. Not tracking back towards Kirkham I first walked away from my ultimate destination by heading downstream to a bend where arriving beside a weir beckoned my arrival at Howsham Mill. 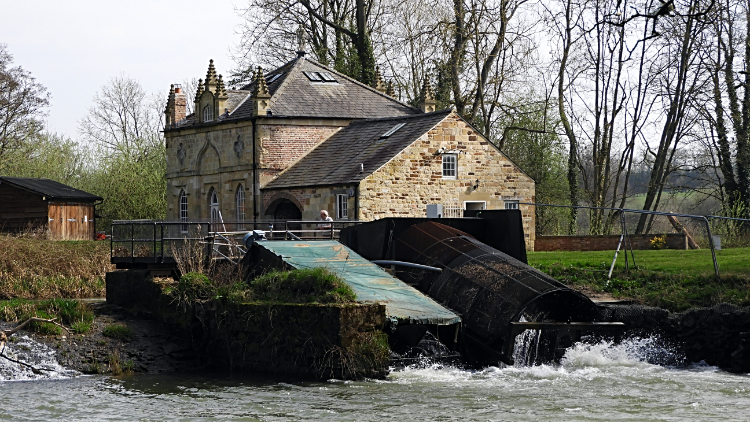 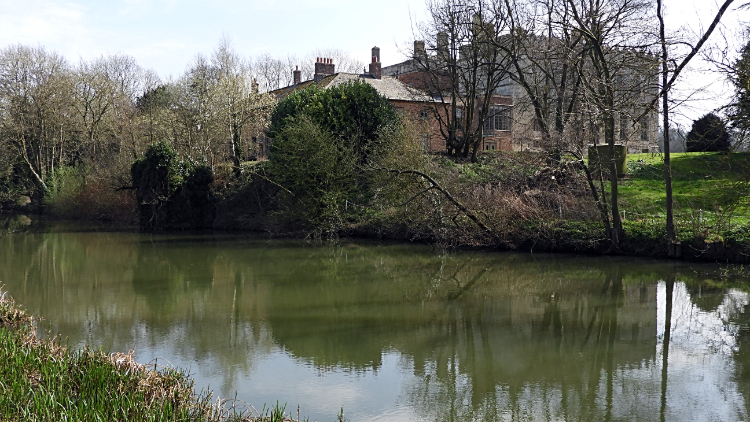 Howsham Mill is an eighteenth century watermill, designed by John Carr of York as a garden folly for the owners of Howsham Hall. It was built in the popular Gothic style of the time. It has seen many ups and downs since and as with many such grand projects it inevitably fell into disuse. Now though it is restored as an education centre and it is now capable of generating renewable energy. I walked a little further downstream to take a good look at the new waterwheel and the screw turbine based on the Archimedean screw principle which is required to generate the electricity. A chap was at the mill monitoring its performance. It looked to be working fine to me. Very impressive. After filling my time enjoying the scene and the workings of Howsham Mill I made an about turn, tracking back upstream to the point and joined the river and then I continued upstream beside the river to pass the substantial Jacobean mansion of Howsham Hall. Since the gentry left the hall has been a school and is now a country house hotel. 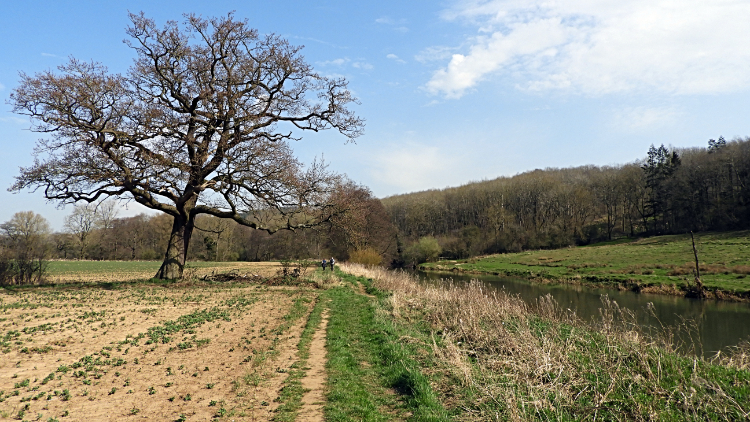 Path alongside the River Derwent 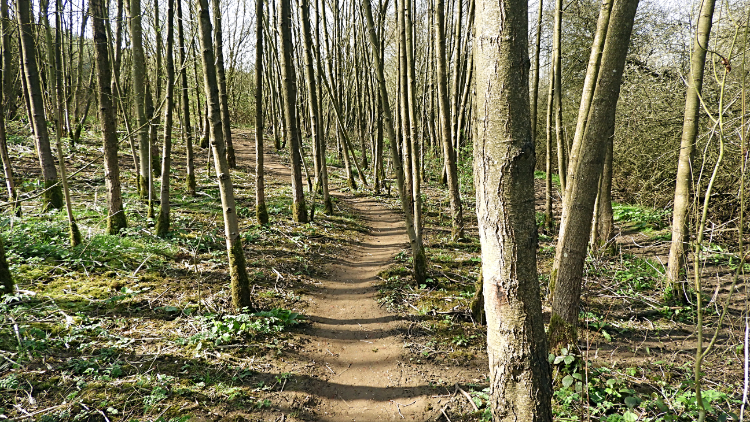 Back in Oak Cliff Wood

From Howsham Hall I enjoyed a two and a half miles stroll back to Kirkham by following the riverbank of the River Derwent. Not immediately though. Just beyond the hall I found a spot by the river, took out my folding foam seat from my backpack and sat down to enjoy lunch. For fifteen minutes I took time out by the river and watched water boatmen surfing the river edge while having lunch. Behind me a farm worker in what looked like a vintage 1970's tractor was scarifying the riverside field. Preparing it for natural flower meadow I imagined. And hoped. A couple walked by, I guessed out from Kirkham and on their way to Howsham Mill before turning and returning the way they came. Others I had met by the river had already done so. After lunch the walking on the path by the river was easy. Bar a couple of places. First, by Spital Beck once more. The little beck I had first crossed at Barton Bridge and then again by the footbridge between Barton-le-Wilows and Crambe Grange had now to be crossed a third and final time just at the point it flowed into the Derwent. It should have been an easy crossing by a footbridge but it was not easy. A huge tree riverside tree had collapsed over the winter and part demolished the footbridge. I managed to shimmy my way around. Then I reached an area of low bog. I could have stayed on the dry path by a field edge but what fun would that have been. More hopping, this time to avoid puddles, and treading across duckboards saw me over the high reed bog land. A fun interlude from the path. 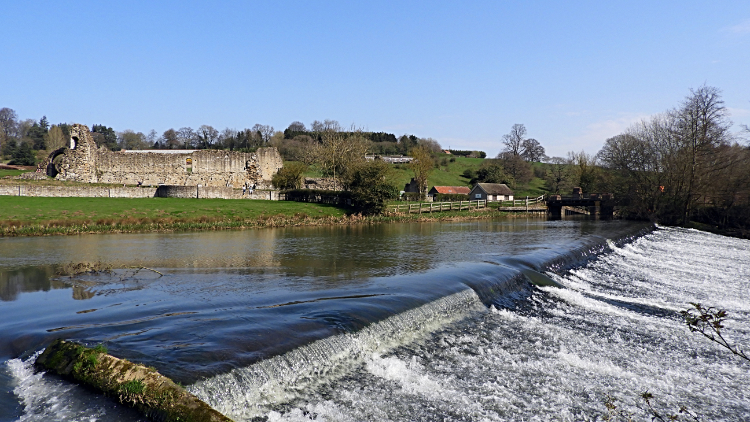 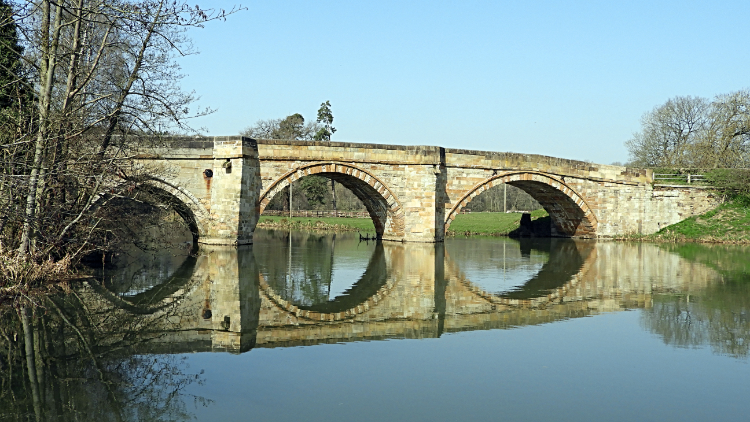 Soon after crossing the bog arrived back at Oak Cliff Wood which I had huffed and puffed up earlier. No climbing this time though, just a few short ups and downs on the low path, to arrive at a second river weir of my day. This one opposite Kirkham Priory. Now afternoon, the vicinity around Kirkham was busy with people. I was suddenly in the midst of bustling sound. Children were playing, parents urgently attentive. Older adults were just enjoying the best of days. Looking across the river to the car park by the priory which I had to myself earlier was now full. And more cars were stationery by the roadside, trying to find a place to park. Kirkham was very busy now. I stayed by the river a while and walked up close to Kirkham Bridge, admiring its character. Still waters made the outer arches appear oval and the central one seem as a circle. It was lovely to enjoy. Then I left the riverside, climbed steps to the road, crossed the bridge and reached the busy car park. As I changed out of my walking boots I chatted with an old gentleman who could not walk far any more. He was a lovely character, saying "Can't do the walking any more, just the looking. Good luck to you lad". Not a bad compliment from him to me, a week and a bit off sixty five year old. We laughed.