Summary: This splendid walk of just over 12 miles was a Peak District challenge for Ken Brockway and his friend John. Follow their exciting journey over Peak District high level dark peak terrain as they take on a superb gritstone edges and outcrops in a circumnavigation of the north west corner of the Peak District, a walk beginning from the car park at Dovestone Reservoir. Make sure you read Ken's personal story of the walk.

The Walk: John says that we shouldn't talk about bagging so while I mention it here in passing please forget that it was me that let the cat out of the bag! It's said that anglers sit on the riverbank to get away from their wives, so needing a reason to go walking John said he wanted to do a Peak Park bagging list found on some obscure walking web site. Perhaps one day John will explain it to me, in sound-bites that prevent my mind switching off. Nevertheless, his list has taken us to some wonderful locations and the occasional 'that is the last place on earth I will visit again'. We started with those close to home or in the most popular parts of the park, we were now in mopping up mode. Today was Dick Hill, Ashway Rocks, Great Dovestone Rocks and Hoarstone Edge. We even managed to bag West Nab on the road to Meltham and a bacon butty from a van parked at the Pennine Way crossing of the A635, a good spot to maximise their customer base. 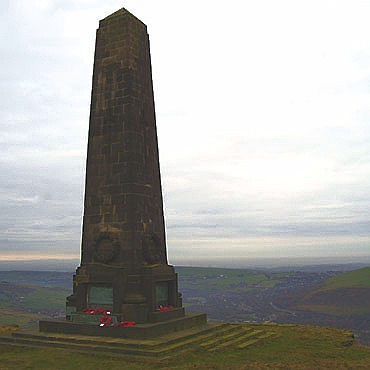 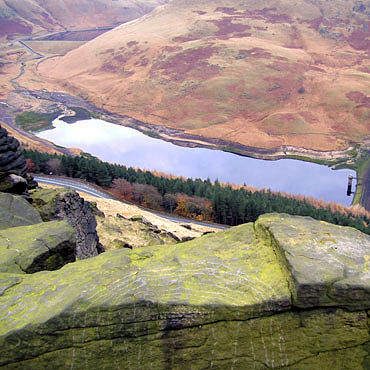 Our starting point was the car park provided at Dovestone Reservoir from where we set off up to Dick Hill at 453M a rather insignificant location but a quest for those driven by spot heights. First port of call was an obelisk set on the edge, near rocks known as Pots and Pans, overlooking Greenfield and the Tame valley, home to the Huddersfield Narrow canal. Built in 1923 as a memorial to the dead of The Great War it stands over looking the towns where the servicemen once lived. We floundered in search of the peak before moving over to Alderman's Hill from where a view of the reservoirs surpassed any offered by Google Earth. As the road climbed out of the valley up onto Saddleworth Moor dark thoughts were recalled by this infamous name. Time to move on and scramble down the hill on this access land to a public path that would offer a convenient escape point. 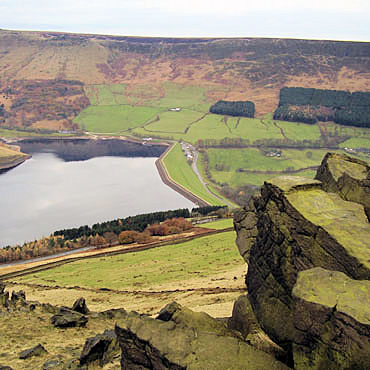 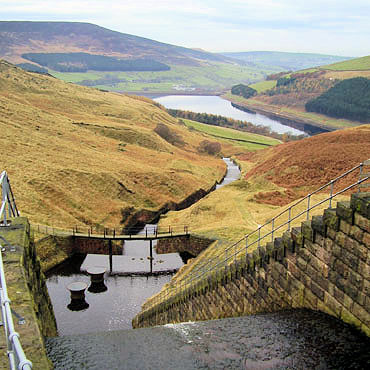 If this is your local area then a short walk of just under 4 miles could take you back to the start along the north shore of the reservoir. Alternatively if you prefer a little more, 5.5 miles will take you around Dovestone Reservoir, again avoiding another climb. Our intrepid group go for the big one and soon start another climb to Ashway Rocks (452M), if only someone could build a bridge from Dick Hill. As I recall Peter and I kept to the footpath and had a more gentle ascent but the GPS route is John's and he did the mountain goat impression, straight up. 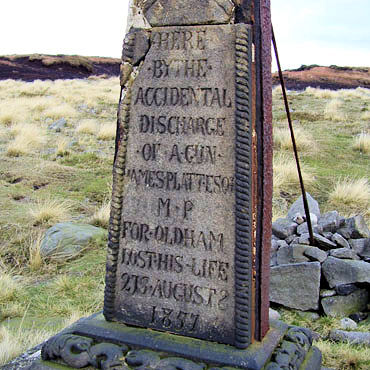 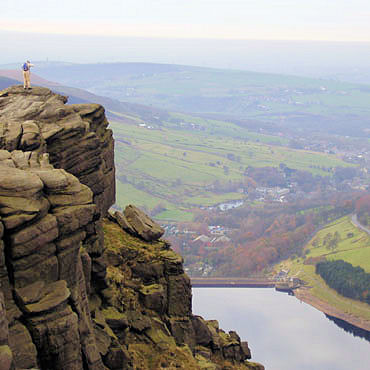 For how much longer this second memorial cross will remain standing without further support is a matter of conjecture but while it remains it attracts attention and reminds us of the risks to all who partake in our chosen sport. "Here by the accidental discharge of a gun James Platt Esq. MP for Oldham lost his life 27 August 1857". I was intrigued and baffled by the mass of works on and around the reservoirs. The purpose of the trumpet shaped pipes at the foot of a cascade has still not been discovered but clearly some folk are more inquisitive than me and wish to know more about the tunnels , pipes and channels that move water about in these hills. 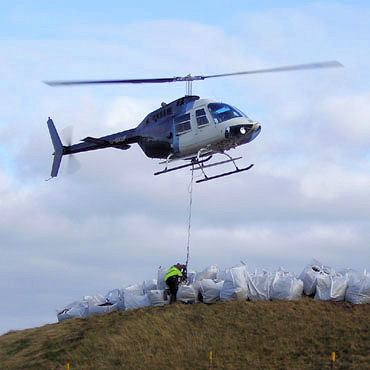 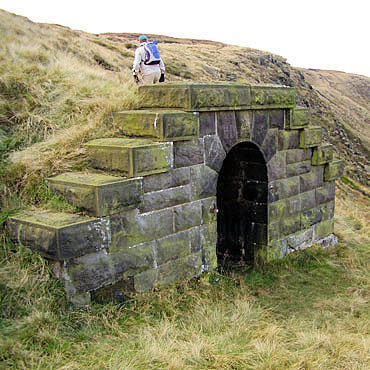 This was a great high level walk around Dovestone Reservoir with panoramic views for most of the day so it's difficult to choose a highlight but looking back at the pictures the Great Dove Stone Rocks took some beating. At the time of our visit in 2007 United Utilities (formerly North West Water) was undertaking restoration work on the moor to encourage vegetation coverage to the areas of bare and eroding peat. It involved the extensive use of helicopters for the deployment of materials as can be seen from the picture. Large bags were brought up Chew Road by tractor and trailer where they were unloaded then flown 3 at a time to the site being restored. 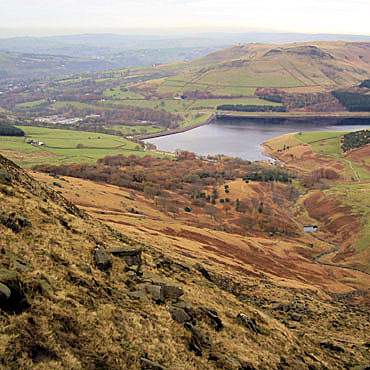 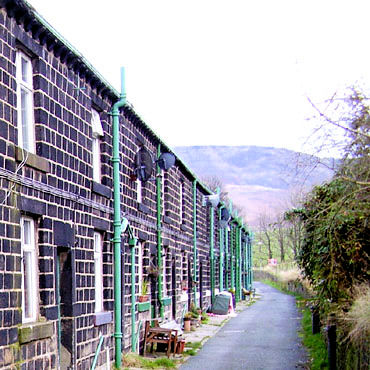 We concluded the day along Hoarstone Edge finally bagging the trig at Alphin Pike from where we headed for the public path, to be sure of stile or gate egress from the access land. As we walked back along the level ground to the car my 'mates' spotted a footpath giving direct access to a pint at The Clarence leaving me 'to bring the car around' for our journey home.