Summary: This was the first walk of three I did on a long weekend in the Peak District during the last week of winter, March 2015. I had long wanted to walk in the vicinity of the famous Monsal Trail without spending too much time on the line of the old railway track. This I achieved by designing a circular walk which covered a number of separate dales, some well known and one which was quite secretive. Follow me on this fine walk which can be completed in a half day or long evening.

The Walk: When researching books on the Peak District for this walk I had read in one the words "Monsal Dale is famously beautiful and this route ends with a gentle amble along Monsal Dale with a stroll along the banks of the River Wye". Taking the description of the walk in the dale as inspiration, rather than end my walk this way, I decided to begin it by walking through Monsal Dale along the banks of the River Wye. I set off from Monsal Head. 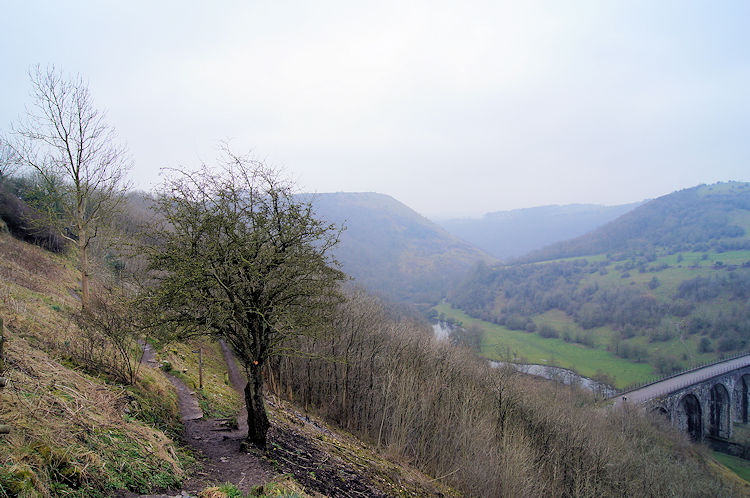 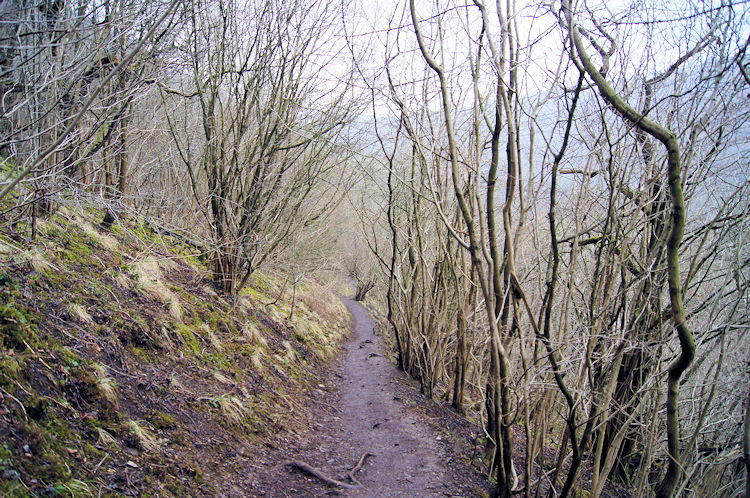 Following the path into Monsal Dale

From my high vantage point at Monsal Head I could see my route through Monsal Dale clearly set out. Directly below me at the forefront of the dale was Monsal Head Viaduct, once a support for trains travelling between Buxton and Bakewell but since the closure of the railway the viaduct is now part of the Monsal Trail route, popular with walkers and cyclists. I would cross it on foot at the conclusion of my walk. To begin my walk I followed a path descending south-west into the dale. At first it was exposed but soon became sheathed on either side by an avenue of coppiced trees. I imagined that in a months time it will be beautifully coloured in fresh spring green foliage; for now the austere exposed bark of winter held sway. 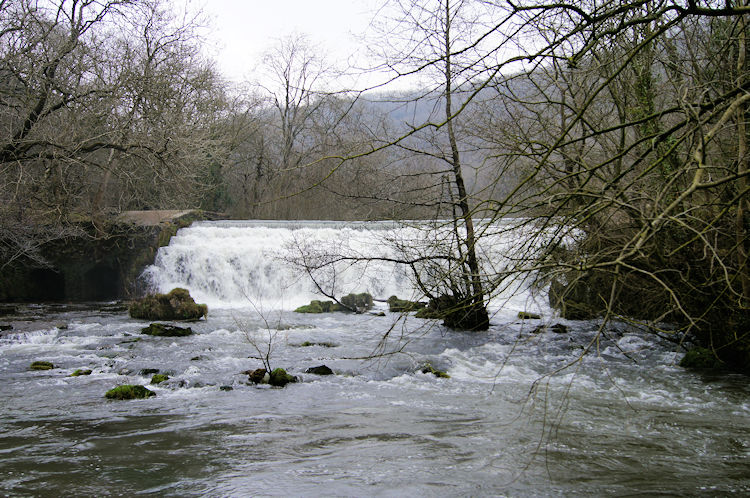 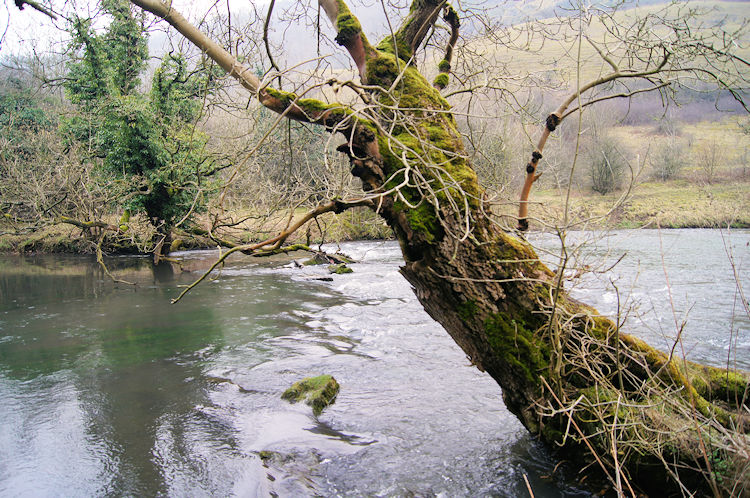 I scuttled down the path to the floor of Monsal Dale. It was not long before I reached the River Wye which I followed on it's south bank for a minute before reaching a footbridge which took me across to the north side of the river. Upstream of the footbridge was a weir which provided a short burst of white water in the calmly flowing river. Following the river downstream on a valley floor path which was slippery from recent rain in some places I enjoyed the tranquility of the dale which I had entirely to myself; bar the local fauna that was. Birdsong of burgeoning springtime was already in effect as partnerships were being forged. 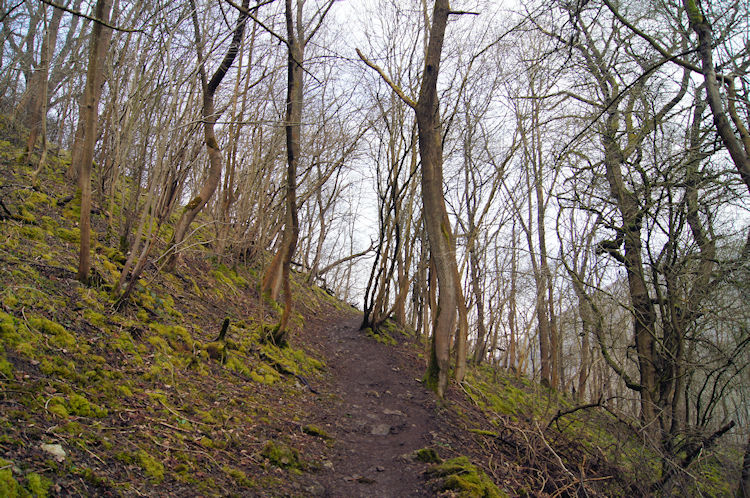 Climbing up the path from Monsal Dale 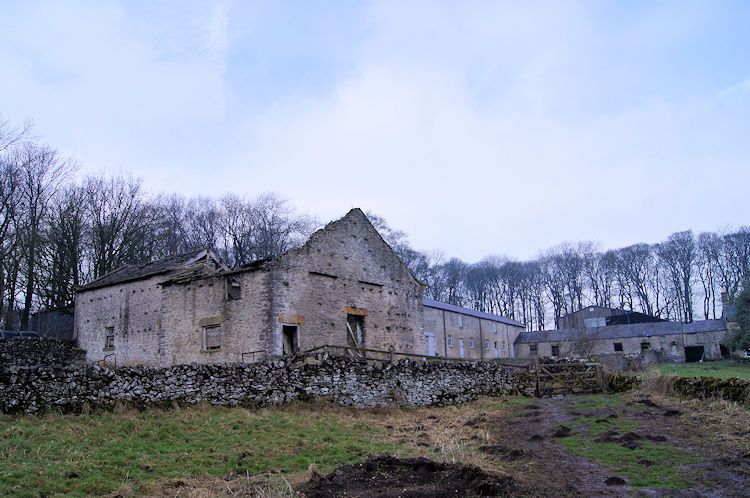 My passage through Monsal Dale ended all too soon. I could have lingered longer had I set off earlier but a lunchtime start meant I had little time to spare so immediately on reaching a crossroads of footpaths just short of the A6 I took the right hand path and climbed steeply up and out of Monsal Dale towards Brushfield Hough. It was a steep climb from the dale, over 100 metres of ascent relentlessly, all gained in less than half a kilometer. The climb eased as I caught sight of Brushfield Hough Farm, a steadier climb ensuing as I walked up to and past the farm towards the hamlet of Brushfield. 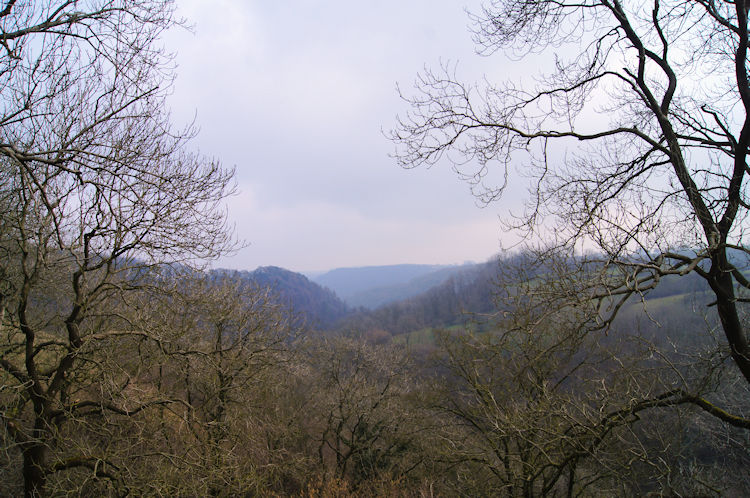 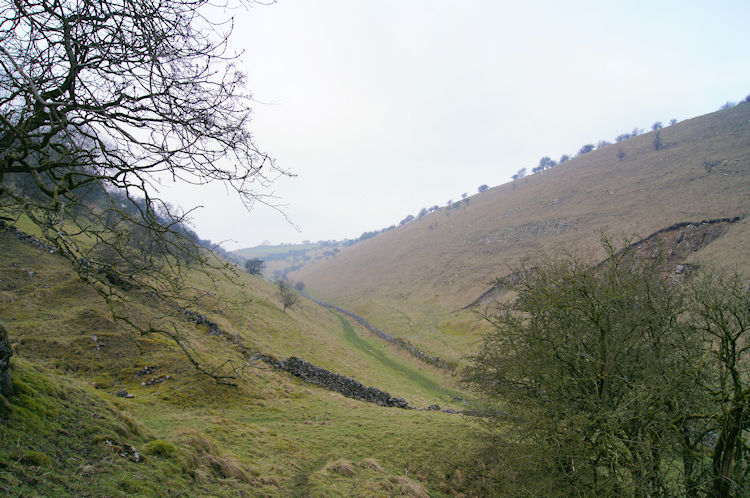 I could hear the rumble of traffic but I could not see it. Taddington Dale was below me to the south but unlike the peace and tranquility of Monsal Dale Taddington Dale is afflicted by a major road running through its heart. I hurried past the noise, I was seeking more beguiling countryside sounds and not the irritating whine of petrol and diesel engines. On I went through the lovely hamlet of Brushfield and after the hamlet came to a choice of paths. The higher one to the north would rob me of High Dale though and I wanted to discover it and I was so glad I did. Despite being close to the A6, and a fast dual carriageway stretch of the road, the high banks of the sweet little dale drowned out the sound completely. I was in complete peace and sat down on a raised bank for five minutes for a warm drink from my flask while I watched a frog guard a couple of clumps of spawn deposited in a small pool beside a solitary hawthorn just below my vantage point. It was an amusing interlude. 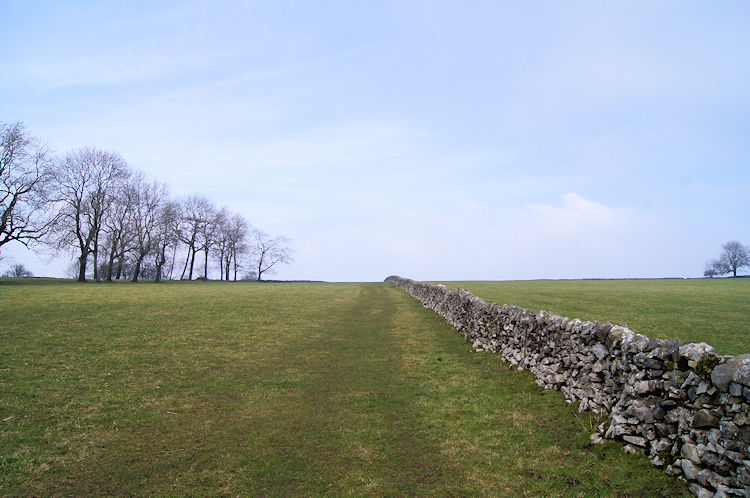 Over the high ground towards Miller's Dale 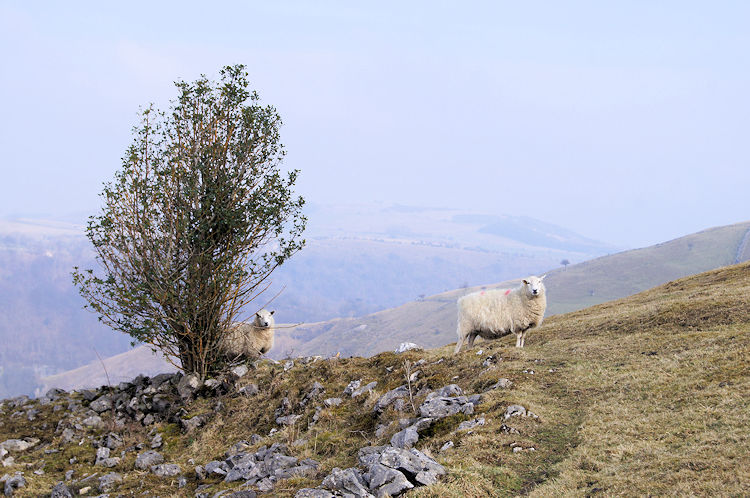 Beginning the descent to the Monsal Trail

At the north-west end of High Dale another choice of paths were presented and I took the right hand one to climb northwards to the plateau of walled fields between High Dale and Miller's Dale. While I walked across the field in the photograph top left I experienced more birdsong, this time a loud symphony of Starlings massed in the row of high trees to my left. Amusingly as I walked alongside the drystone wall on the east side of the field the murmuration of birds migrated from tree to tree as if they were keeping a close eye on me. Only after I had cleared the row of trees did I notice they were back in their original location. I was no longer a threat or of any interest to them. If only they had known I never was a threat then perhaps I would have not got the show. Beyond the long field I reached the crest of my walk and began to descend. Sheep closely watched me do so. 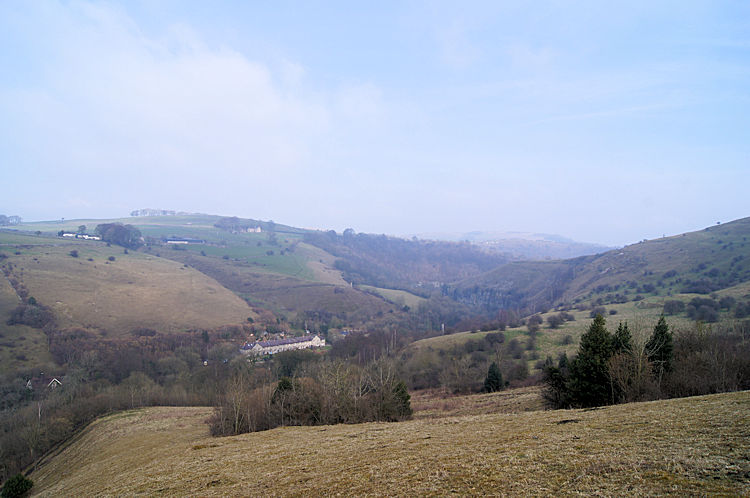 View towards Cressbrook from the south-west 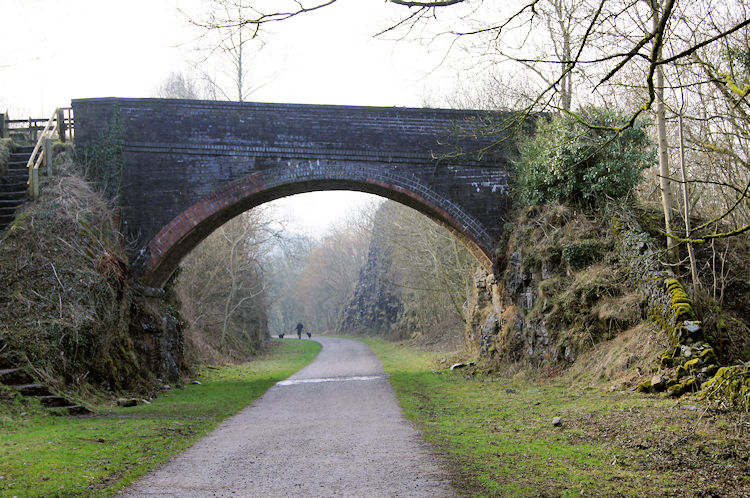 On the Monsal Trail near Litton Mill

Towards the beginning of my descent toward's the Monsal Trail at Litton Mill I came across lots of earthworks and the remains of a lime kiln, around grid reference SK 15461 72556. It was like a mini bomb site with craters everywhere. My attention was taken up by the old workings for a while as I imagined working in exposed conditions up at this height but once I was beyond the works my thoughts were grasped completely by the view to the north. The vast valley of which Miller's Dale is only a part was splendidly laid out before me. This valley, which sees the transit of the Monsal Trail through it, was a majestic view from height. Though the view was slightly hazy I could make out all the limestone cliffs along the length of the valley, many of them cut vertical to allow passage of rail or road. Other limestone bluffs were naturally cut by the actions of the River Wye. After taking in my fill of the beautiful panorama I ambled down the bank to reach the Monsal Trail near Litton Mill. 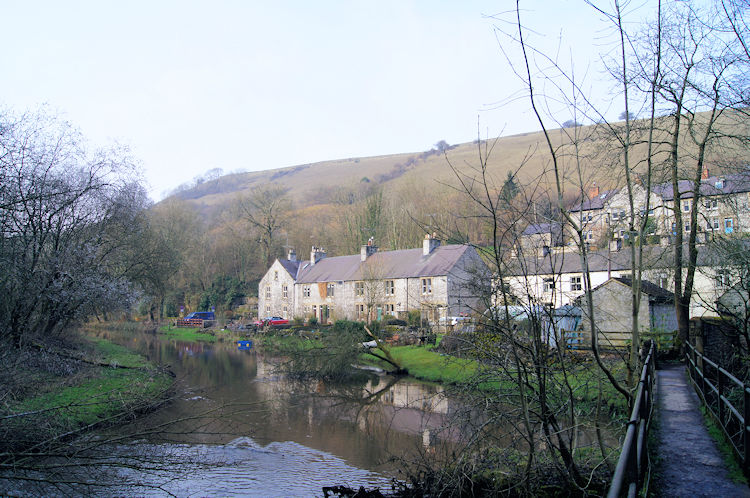 Cottages beside the River Wye at Litton Mill 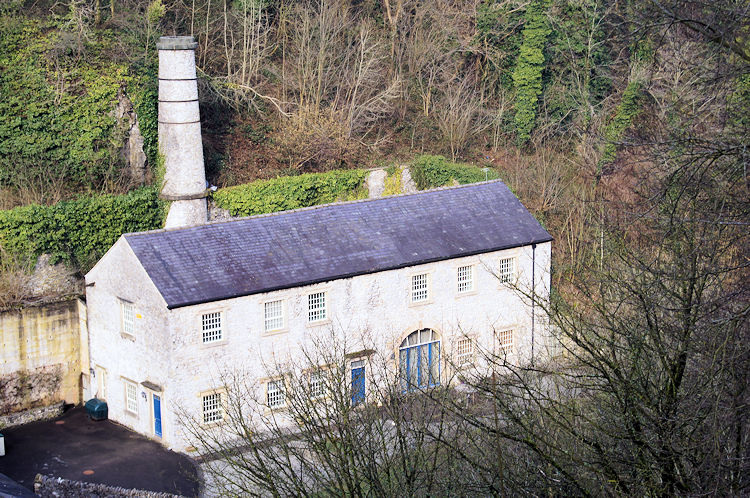 My original intention had been to follow the Monsal Trail from here all the way back to Monsal Head but my walking plans are never entirely fixed; I always allow myself the latitude to make ad-hoc decisions. My first was made as soon as I had stepped on to the Monsal Trail. I immediately stepped off it again to follow a path down to Litton Mill. The setting of Litton Mill in Miller's Dale is one of peace and tranquility and a draw to many visitors. That has not always been the case. The original 19th century mill became notorious during the Industrial Revolution for the unsavoury employment practices it employed which was typical of many similar mills during those austere times. Imagine that when you look at the manicured cottage gardens around the converted mill now which provides bijou dwellings. Back to now though, it is a pretty picture and worth a visit. I looked around the habitation for a while which has some very pretty riverside cottages before climbing back up the path to the Monsal Trail. Now I followed it eastwards. 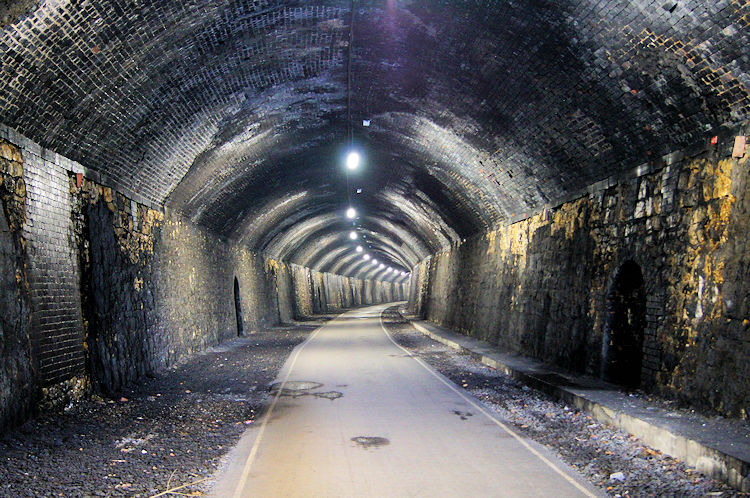 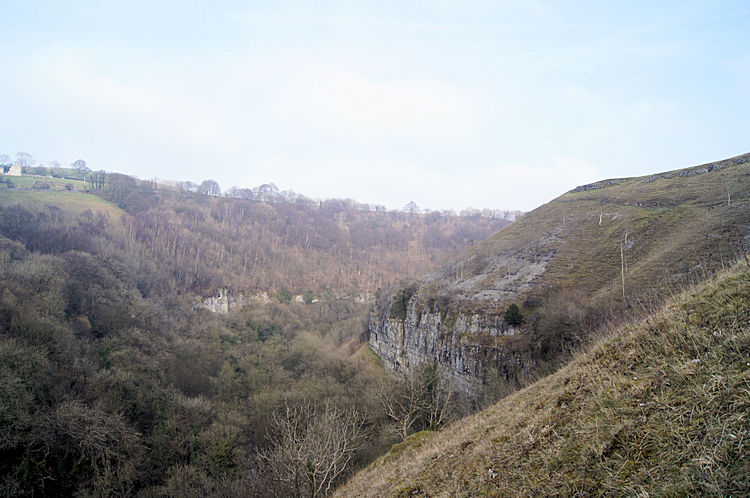 The path above Litton Tunnel

I stayed on the Monsal Trail for about 300 metres until I reached the entrance to Litton Tunnel. In fact I walked into the tunnel for a look, just to feel the atmosphere of being within it, before turning back and taking a path up to the south bank of the dale which climbed from the left hand side of the tunnel. Being at height and seeing the countryside appealed much more than blazing a dark trail through the tunnel. It began as an exhilarating path clinging to the bank of the valley and remained so. 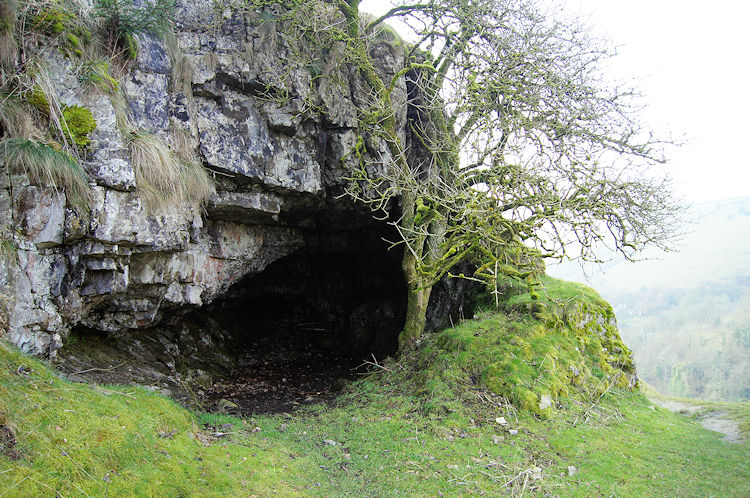 One of the caves beside the path over Litton Tunnel 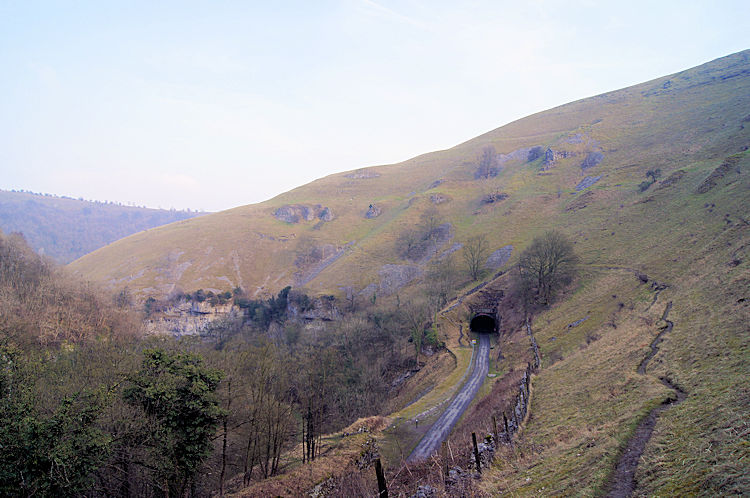 Looking down on the Monsal Trail and Miller's Dale

Soon after leaving the Monsal Trail and following the rising path I turned a corner and came across a series of caves, about four, all cut into the limestone. They were not deep enough for mining activities, perhaps they were shelters for travellers? I would not have minded staying overnight in one of them, sheltered from prevailing winds while looking out across the brilliant views of the valley below. As I continued walking the meandering valley below me continued to draw my attention, particularly as walkers and cyclists on the Monsal Trail, all ant-like in size, made the view a constantly moving picture. Some moved along, others were stationery. A group of half a dozen cyclists had dismounted their bikes and were sat by the trail side looking into the river. Others passed them by casually. It was an entertaining scene to enjoy from above. 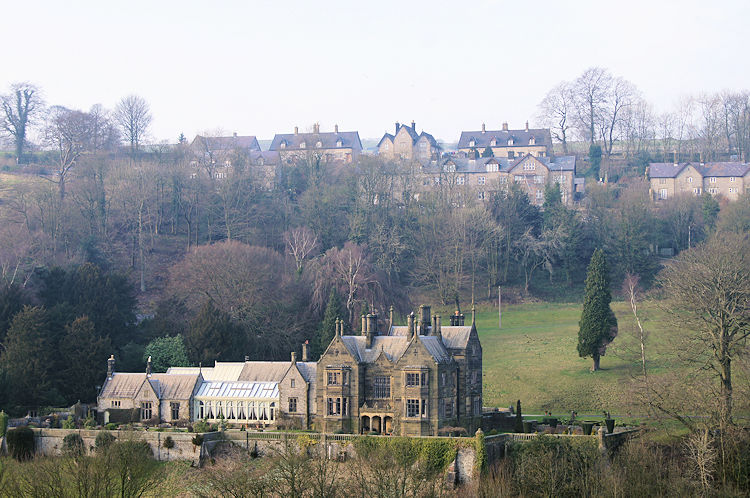 Cressbrook Hall and the village 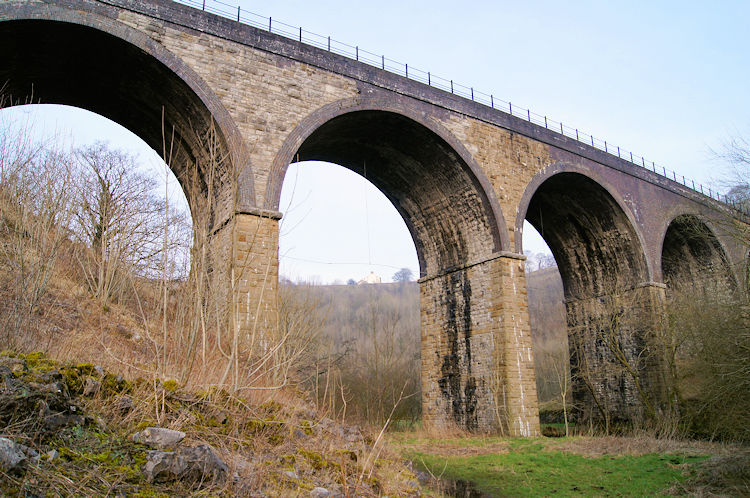 The path meandered in parallel with the river. I passed Cressbrook and its impressive hall which were elevated above the Monsal Trail but practically level with me. Then I meandered around another corner into Water-cum-Jolly Dale. You could not make it up, but there I was an walking swiftly though a children's story type named dale to the conclusion of my thoroughly enjoyable walk. Tomorrow I was facing a toughie to the Great Ridge and Win Hill but this walk had been a perfect preamble, a good warm up and a great pleasure in it's own right. I ended it by meeting the Monsal Trail once more and following it to the Monsal Head Viaduct which I stepped down from to revisit Monsal Dale briefly. Then back up to the viaduct I went and across it before climbing back to Monsal Head on a steep ascending path.

I stopped once or twice on the climb back up to catch my breath. In my recovery phases I smiled, looked out to the wonderful view once more and thought back. I would do this walk again, it was great. Monsal Dale was a thorough delight to walk through, the river Wye being lovely to look over. The climb to Brushfield Hough a jolly good work out. High dale was a great find, special indeed. The Starlings... and the find of old lime workings. And that was all before Miller's Dale, Litton Mill, the Monsal Trail and the superb elevated path. Actually, this walk was altogether brilliant.