Summary: The moorlands north and east of the Upper Derwent Reservoirs are as wild, remote and bleak as anywhere in the Peak District National Park. The area, known as the High Peak is one of heather moors and peat bogs which offer the walker a wonderful and challenging day out. The Upper Derwent valley which forms the approach and exit from the walk is beautiful in itself and is steeped with history. The moorland which forms the central section of this walk is starkly attractive and the views provided from up on top of the moors are divine. 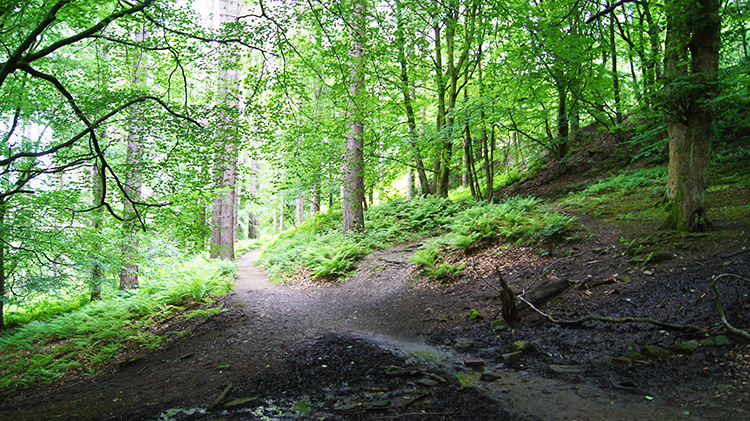 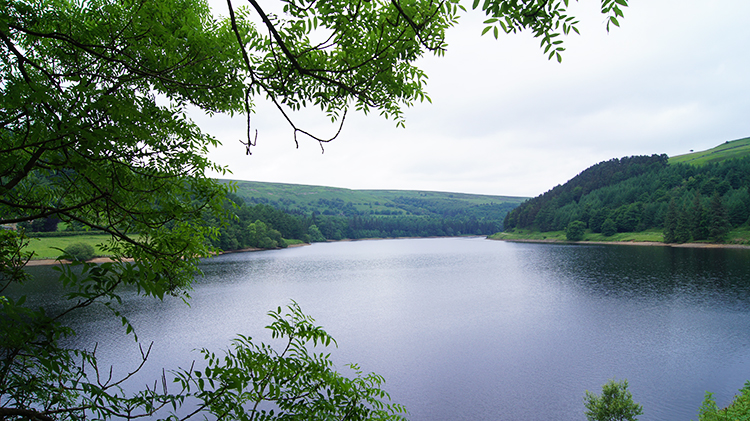 It was cloudy but fine, a good day for walking and just two days from the longest day of the year as I set out from Fairholmes Visitor Centre at 10.30am. The centre was starting to get busy, the car park filling up steadily. I walked off from the burgeoning crowds by following the roadway around to Derwent Reservoir Dam before climbing from the roadway by a forest track leading to the bridleway which would lead me past Derwent Reservoir and Howden Reservoir to my chosen access route onto the moors. Henceforth I maintained a good pace walking with the reservoirs to my left and woodland to my right. Often on the right hand banks between bridleway and woodland were blushes of bright pinks and purples from flowering Rhododendron. They were complemented by the contrasting bright yellows of flowering Gorse which were also randomly spread along the way. 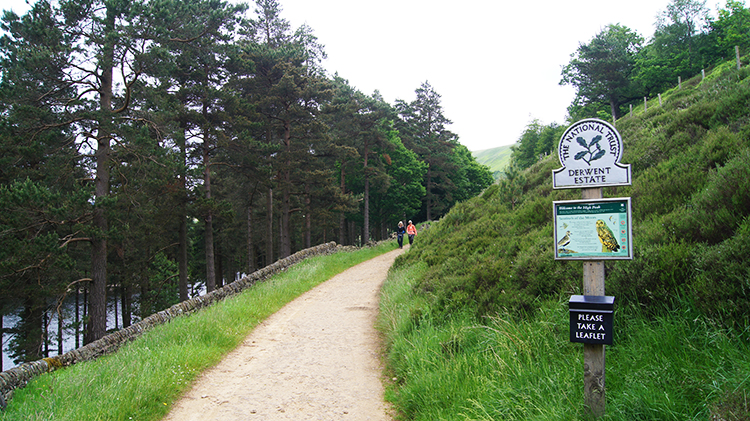 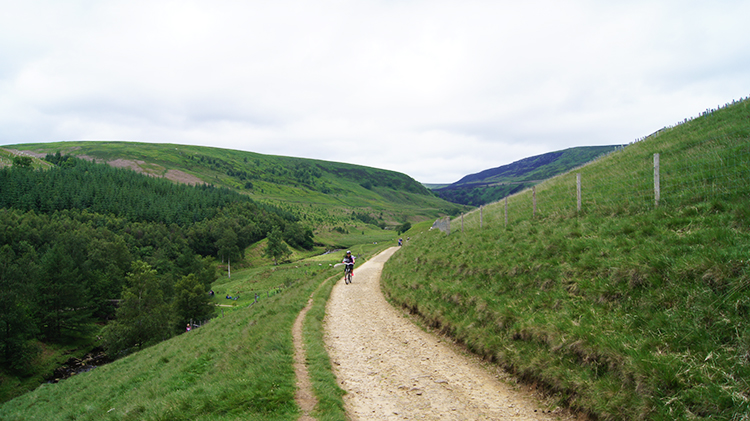 The track at Cold Side

The colours of Spring flower and the varied greens of growing grasses and early season tree foliage are always an attraction to me; they made the four mile walk beside the reservoirs as pleasant a walk as it could be. Had access to the moors been further up the valley I may have opted to miss out on this long valley approach past the reservoirs but now I was glad it had not been on offer. I was as fresh as I could be when I eventually reached Cold Side on the north side of Howden Reservoir which is the highest of the three reservoirs within the Derwent Valley system, in order Howden, Derwent and Ladybower which is the most well known. As I continued on the track at Cold Side I was presented with my first view of the moors I would soon be climbing to. I continued along apace in anticipation while a few walkers passed heading down towards the reservoirs. A large group of mountain bikers also peddled past me. 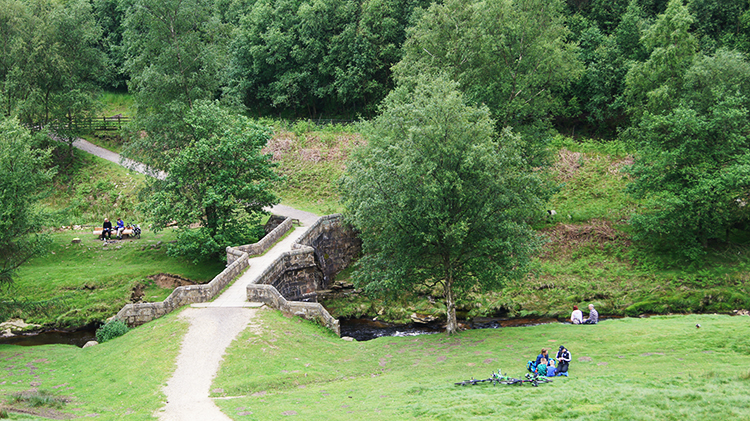 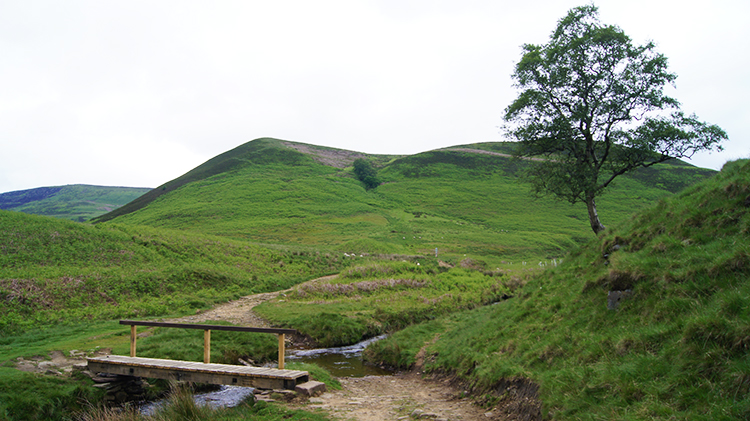 I arrived at Slippery Stones Bridge, a 17th century packhorse bridge straddling the River Derwent. The bridge has an interesting past. It was originally sited further downriver at the former Derwent village but the construction of the Ladybower Dam meant that Derwent village would be submerged beneath the waters of the new reservoir. The bridge, a scheduled ancient monument, was therefore dismantled and the stones numbered and put into storage before it was reconstructed at the new site, around fifteen years after its dismantling, in 1959. Groups of mountain bikers and walkers were relaxing beside the bridge. It was 12.00 noon. No relaxing for me though, after my leisurely prelude I had the serious climbing to begin which I did as soon as I had crossed the humble wooded footbridge spanning Cranberry Clough. 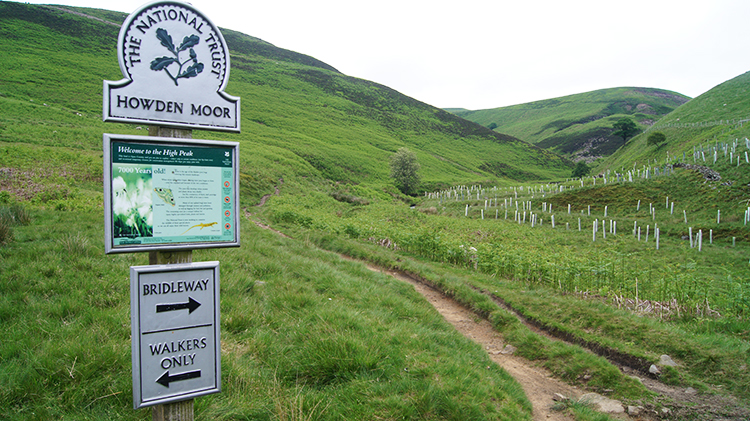 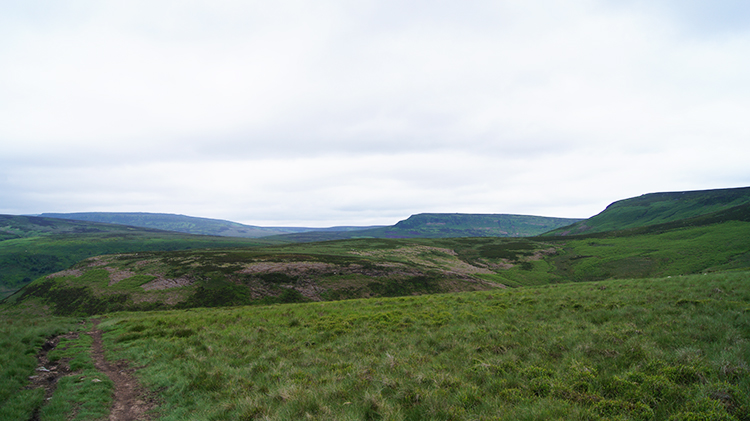 I followed Cranberry Clough upstream towards Howden Moor. Soon Cranberry Clough intersected with Bull Clough which I had to step across and a short distance afterwards I left the line of the watercourse to climb past some small disused quarries to climb in earnest on a steeper line up Little Cut towards Cut Gate End. As I climbed over the 400 metre altitude line the views really began to open out. I spotted clusters of exposed stones along the edge which was now presenting itself. These included Bull Stones and Crow Stones. Beyond the outcrops I looked further north across to Harden Moor and Langsett Moors. My course was east though, up to where Cut Gate End reached Wilfrey Edge at over the 500 metre line. 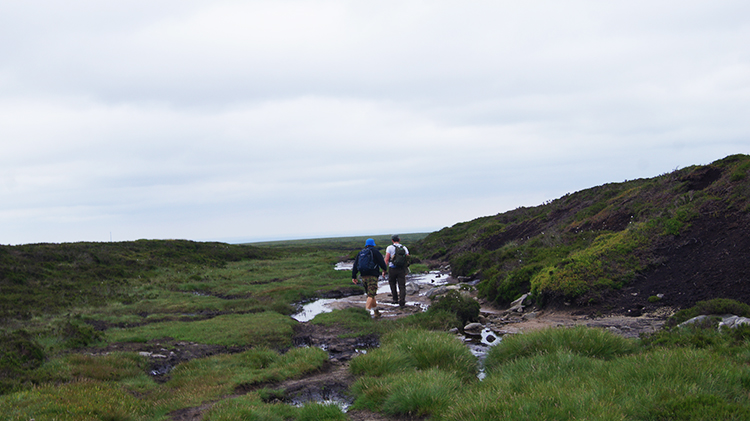 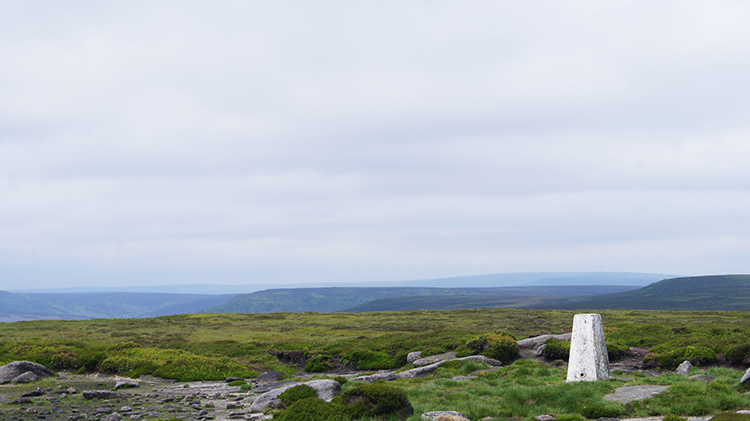 As I approached the intersection of Cut Gate End and Wilfred Edge from the west I spotted two walkers walking in from the south. They had come from where I was going. They were destined to reach the intersection before I could complete the climb though so we never met up. While I had seen quite a few people earlier on by the reservoirs and while I would see lots and lots more when I returned to the valley bridleway these two on the moor were the only people I was to see walking high up. I was to meet one other person on the high ground though and I will come to that in a short while. First I had my pre-determined challenge of walking to a trig pillar. The one set at 546 metres high on Margery Hill. I spotted it, walked across a stretch of high moor to the whitewashed Ordnance Survey structure and when I reached it I had it all to myself. 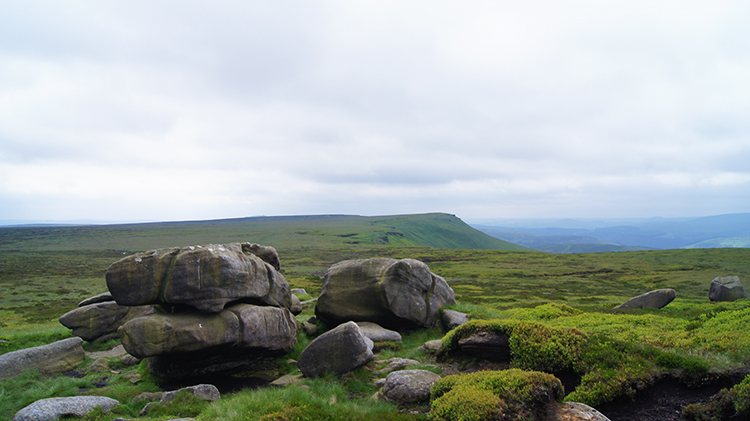 The view south from Margery Stones 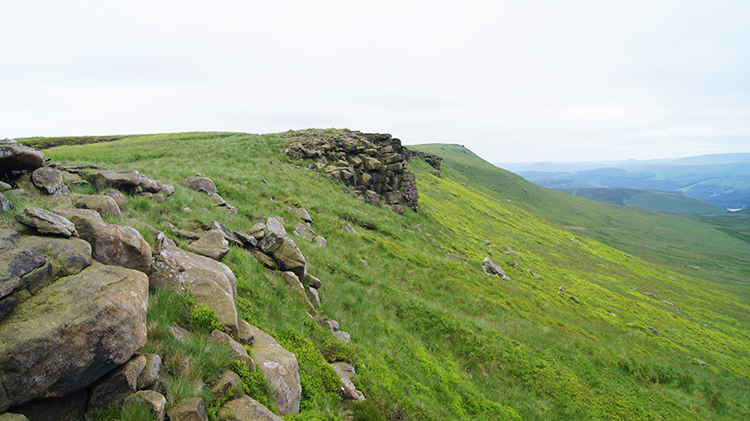 I had picked the trig pillar as my point for lunch. It was just about 1.00pm when I reached it, just about the right time. But I found it to be too exposed and too windy to hunker down for lunch there. Fortunately they was a small group of granite rocks sitting up on the moor close by, perfect to shelter by. I had lunch at Margery Stones. Having nestled down into a wind free recess and while having lunch though I had to wave unwelcome intruders away. A gang of Wasps had taken residence and were attracted to my lunch. I did not stay one moment longer than I had to. They had seen me off. Having packed up as quickly as I could I walked over from the shelter of Margery Stones to the breeze on Howden Edge which would keep any irritating insects at bay. I followed the Wilfrey Edge which in turn became Howden Edge, continuing south along the high line, set at around 530-540 metres. 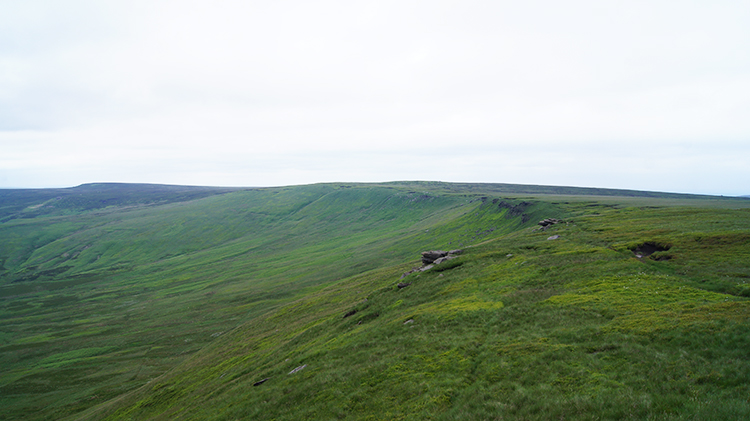 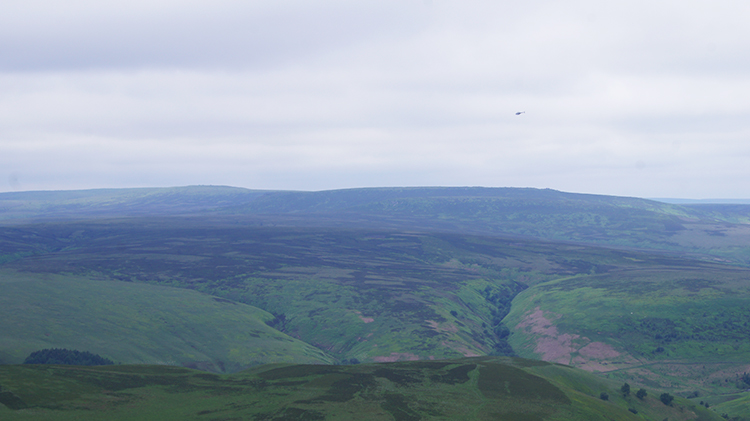 Intermittently I reached granite outcrops on Howden Edge. One, High Stones, is named on the maps. The others are anonymous and there are quite a number of them. Eventually I came to the south extremity of my particular stretch of Howden Edge near to Featherbed Moss and here, on a small outcrop of stones and by a small cairn sat on the outcrop I met a lady sitting down. On meeting her she said "I regularly come up here to sit and do nothing in particular. It helps me chill". I told her I completely understood and on wishing her well I left, allowing her to continue in her peace. I was nearing the point of my descent from the over 500 metre level of Howden Edge and took one last long look over the lands of the High Peak before heading down back into the Derwent valley. 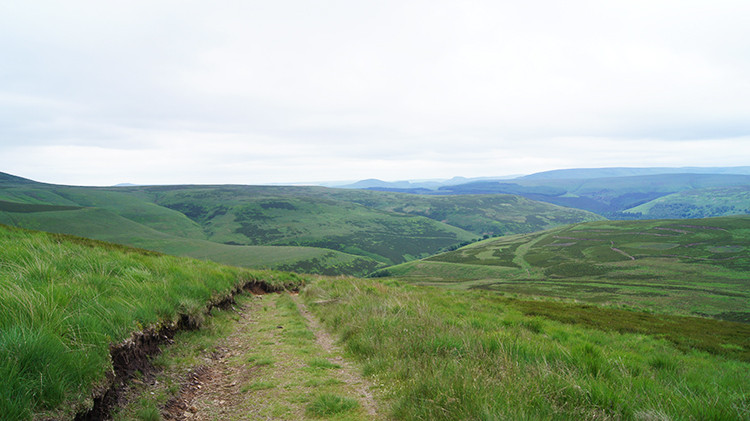 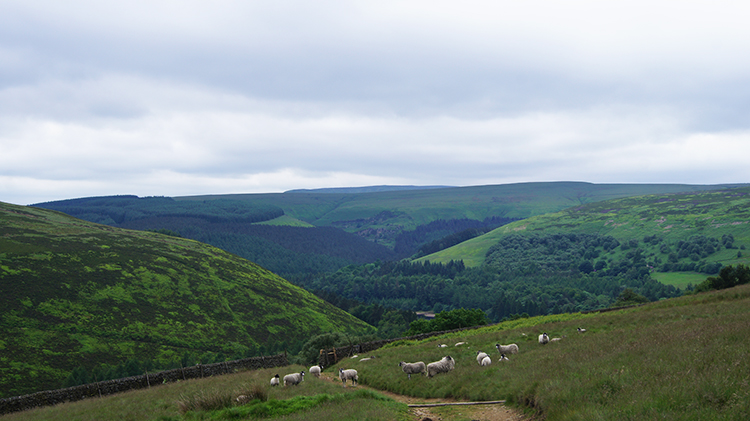 I walked on a decline heading south-west from Howden Edge and across Nether Hey towards Hey Bank. All the way I could see the distinct capped profile of Winhill Pike in the distance dead ahead of me. I recalled my good time up there on another of my memorable Peak District walks. I continued downhill, eventually losing sight of Winhill Pike as it sunk into the background. I focused on my course below. Halfway over Nether Hey I came to disturb a few Grouse sheltering on the moor. I do not know who startled who the most because I jumped at the same time they bolted from ground just a step or two in front of me. They huddle down and then they panic, sometimes flying straight across my eye line. Further down I came across Sheep grazing. They were not alarmed, watching me attentively as soon as they had noticed me. Seemingly without a worry those on or near to the path edged away slowly as I walked by. I preferred that, less stressful for all concerned. 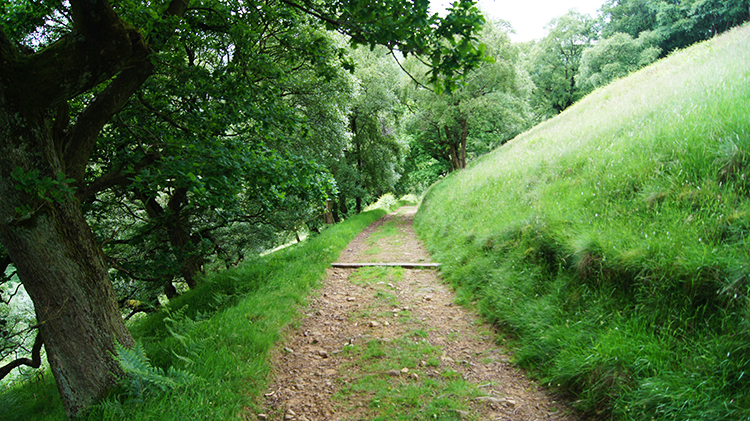 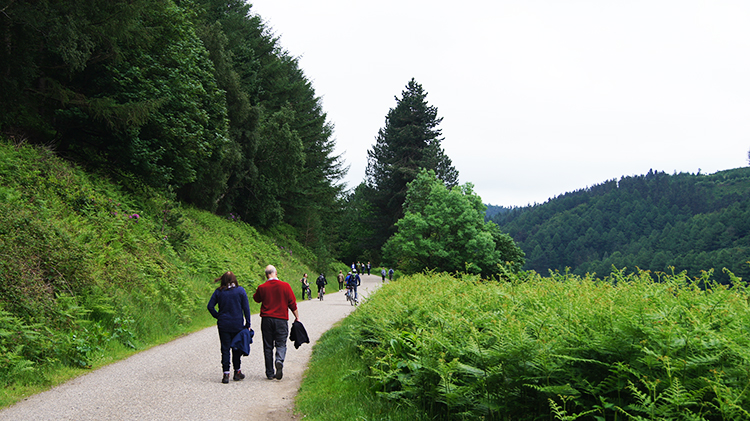 Having completed my descent of open land I came to the confines of a bridleway leading down to the valley by way of New Close Wood. Mostly Oak, the woodland was delightful, trees randomly spread and all very pretty indeed. Less appealing to me were the regulated lines of plantation further down the bank. It all looked the same. At least I was soon past the standing to attention plantation army and back to the level of Derwent Reservoir. I began my walk home, retracing my steps from earlier on in the day. Noticeably, after my walk of solitude on the moors I was now amongst others. Rather than the few of earlier in the day, there were now significant numbers. Some were walking, some were cycling. All were enjoying themselves. As we progressed along the edge of Derwent Reservoir together I wonder how many were aware of the history. 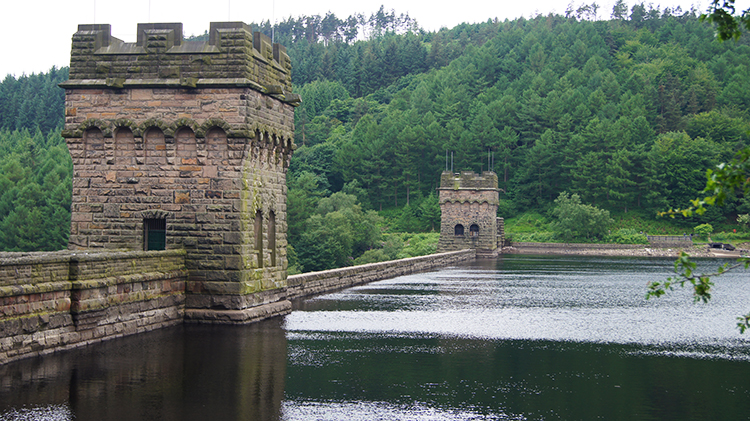 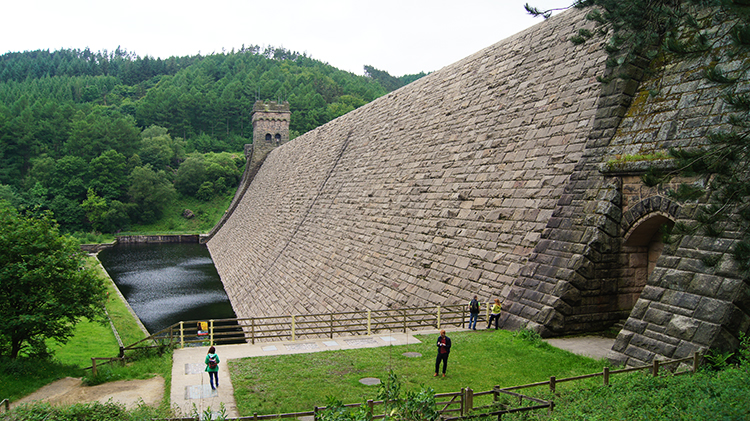 Anyone interested in modern warfare or in aircraft will probably be aware of the Dambuster raids of World War Two. The action, to disrupt Nazi industry in the Ruhr by destroying Dams by using Barnes Wallis's Bouncing Bombs needed a lot of thought and imagination in theory and then the Bomb crews chosen for the task in Operation Chastise would need a lot of practice before the real event in order to have the best chance for success. Derwent Reservoir was chosen as one of the most likewise to those in the Ruhr and strategically one the best sited reservoir for the Lancaster Bombers training runs. Thus, the Bombers practiced by approaching and flying over Derwent Reservoir during 1942 ans 1943. I bet that was quite a sight. As I walked past the Dam and then down to the Dam wall I thought it would take a powerful bomb to hit that and breach it. Nowadays perhaps not a problem but way back then. Some effort it would have taken. I admired the Dam for what it is, a marvellous piece of engineering. 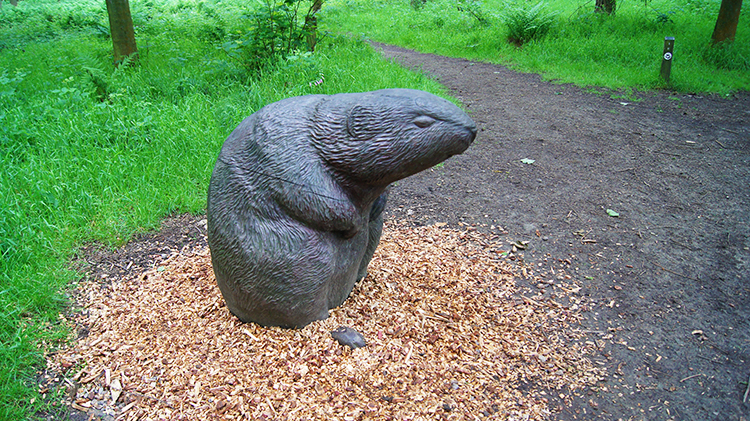 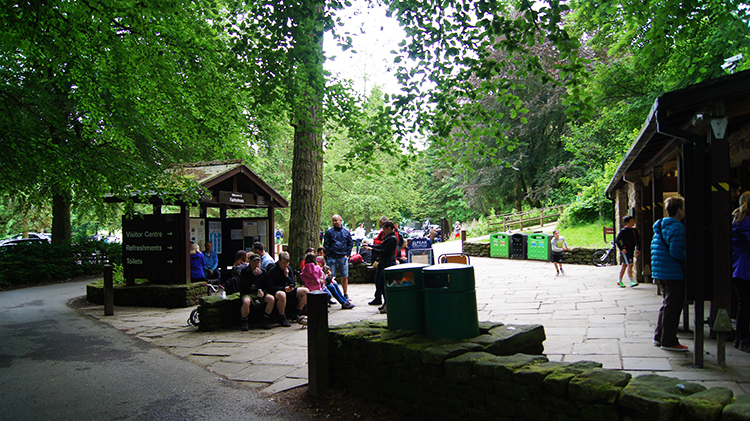 I had expected my walk to end as it had began, by following the road back to Fairholmes Visitor Centre. However I saw people ahead of me leaving the road and following a woodland trail so I followed them. It led me to a sculpture of a Beaver with wood chip set around the base which was quite interesting. Then I spotted Fairholmes Visitor Centre on the far side of the River Derwent and I realised I would have to walk back to the road. Ah well, it was a bit of fun to end my walk.

And so to my conclusion. I finished a wonderful Dark Peak walk which I thoroughly enjoyed. The walk along the valley from Fairholmes Visitor Centre to Slippery Stones Bridge is obviously very popular. There were lots and lots of people enjoying it, either by foot or by pedal power. I enjoyed it too. Yet the mystery to me was that very few left the valley floor to explore the wilderness moors on the periphery. Still I am not complaining, the quiet was beguiling. Both parts made the whole walk a fantastic one.