Summary: Chrome Hill was the subject of my first ever Peak District walk, the Buxton and Chrome Hill walk of a New Years trip in the first week of 2004. It snowed that day, covering Chrome Hill in a sugar coat of white. Very seasonal it was. On that walk, on seeing it, I was immediately struck by the beauty of Chrome Hill and though I had never included it in the walk, by the beauty of near neighbour Parkhouse Hill too. The two limestone hills complemented each other perfectly and I resolved to climb them together as a walk one future day. I never thought in would take 14 years to get around to though. Far too long! Anyway, here we are at last. The walk was finally planned for my Peak District trip of 2018 and thoroughly enjoyed on a blisteringly hot day. Here is the story of my walk.

The Walk: Chrome Hill and Parkhouse Hill are limestone reef knolls, formed by deposits of ancient sea life, sponges, coral and the like on an ancient sea floor many millennia ago. Imagine that, I was heading out on a walk to cross hills of fossils, hills which were formed by the residue of organisms which most likely accumulated and formed within becalmed yet still shifting seas beyond out imagination of time. Anyway, whichever way Chrome Hill and Parkhouse Hill began to be formed it is certain what they have now become. That is beautiful hills and now I was setting off from the quaint and peaceful village of East Sterndale to climb them. 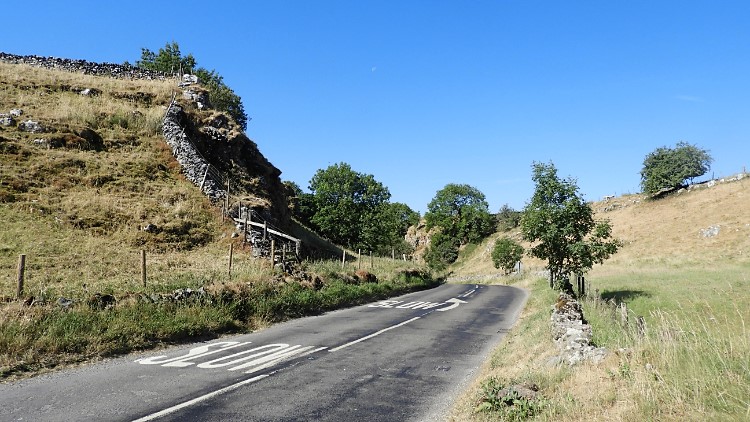 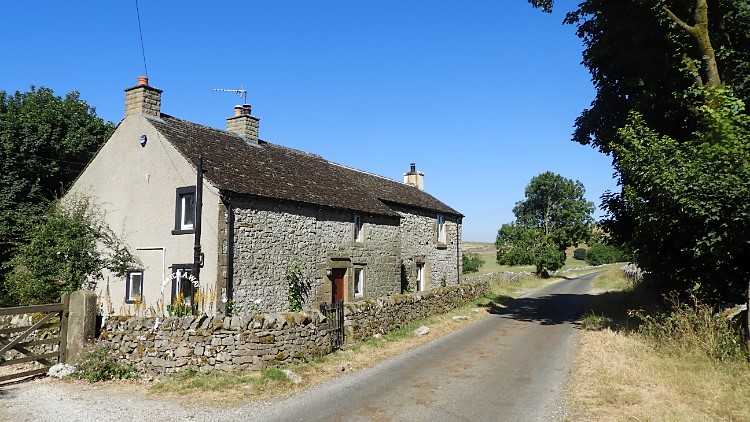 The day was hot with not one cloud in the early July sky. Looking up to the blue and sensing the becalmed; there was not a breath of wind, I set off by ambling out of East Sterndale. There was no rush, the walk was not too long, and i was set on enjoying myself. I followed the road leading north west out of the village towards the A53 at Axe Edge. Not that I was going that far by road. I walked just short of 500 metres to reach a crossroads near to Glutton Dale. I encountered not one vehicle. I crossed the road and passed a lone cottage at Hatch-a-way before walking another 500 metres along the road towards Harley Grange. Again, I met not one vehicle. I had walked a kilometer of road and all I had heard was the twitter of birds. It was certainly becalmed. 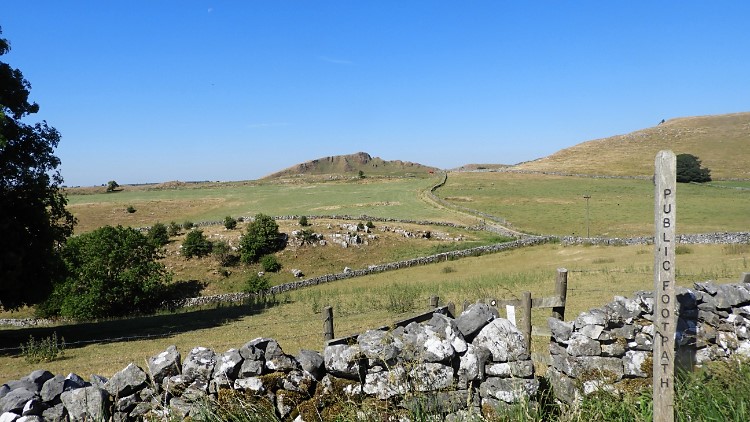 The route to Dowel Dale 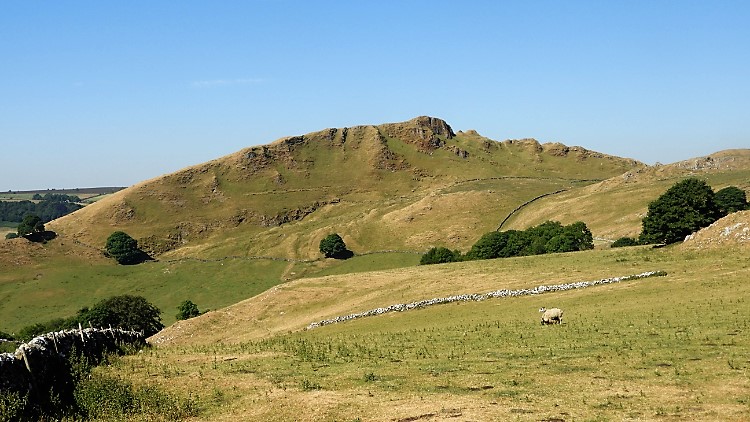 The way-post said 'Public Footpath'. It pointed my way from the road by way of a narrow gap through a not too sturdy dry stone wall and through a rickety gate directly across a field and towards higher ground. It was my route towards quaint sounding Dowel Dale. I focused my eyes on the top right hand corner of the field and on the bridleway leading beyond the field and up the foremost hill which was my most immediate goal. By the bridleway was a red object. wondered what it was. Behind the red object was the serrated edges of Chrome Hill. They were unmistakable, even from this distance. I itched to climb Chrome Hill but I realised it would take me a little time to get there. It was just 10.00am but it was blisteringly hot, well over 20 degree Celsius and rising. It was to hit 30 degrees in London, I guess it was not far off that here. 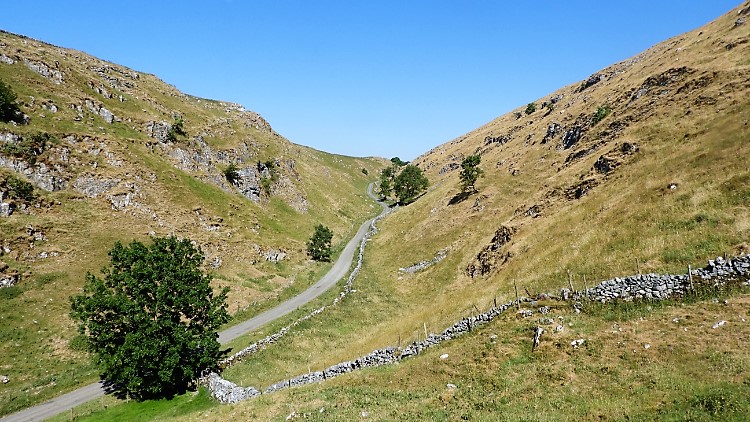 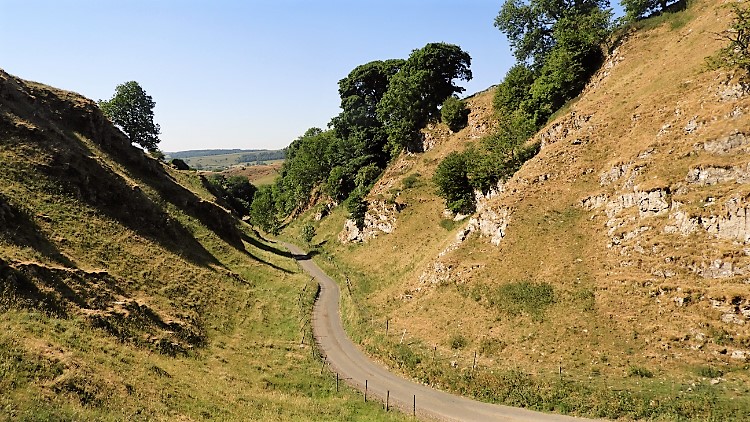 The red object I passed was some form of farm machinery, possibly a bale collector. The shade it provided was very much appreciated by a group of eight sheep who were huddled together, some under the apparatus and some on the sheltered lee side. I walked closely by but they were not inclined to move by me. The sheep were shorn but still shelter was their priority over concern about me. I could not blame them, I was in t-shirt, shorts and carrying the minimum weight of backpack. All conventions of carrying for all circumstances had been dismissed, all my rain gear had been left in the boot of the car. I had the minimum, first aid kit, multi purpose tool, paper map, GPS, compass, food and drink. That is it. I crested that hill beyond the sheltering sheep, a no name 357 metres hill and then having crossed another field I came down to my first view of Dowel Dale. "What a beauty" was my immediate thought. It is a very picturesque small dry limestone valley. A road runs through it, eventually meeting with the one I walked on leaving East Sterndale. I descended to the dale and then walked on the road through it, from south east to north west, exiting it at Owl Hole. Not one vehicle impeded me here either. 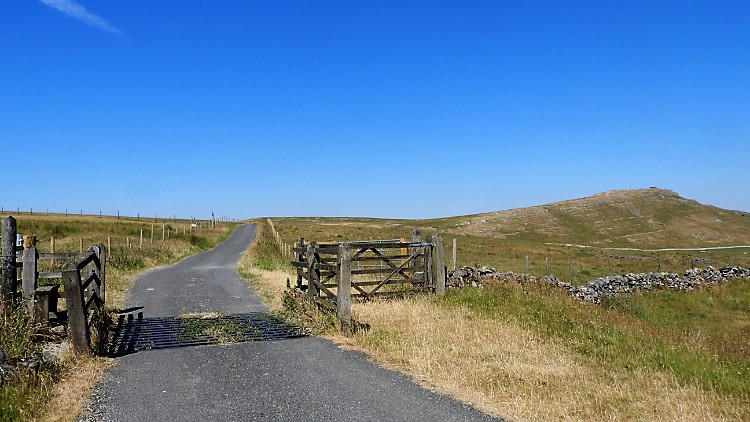 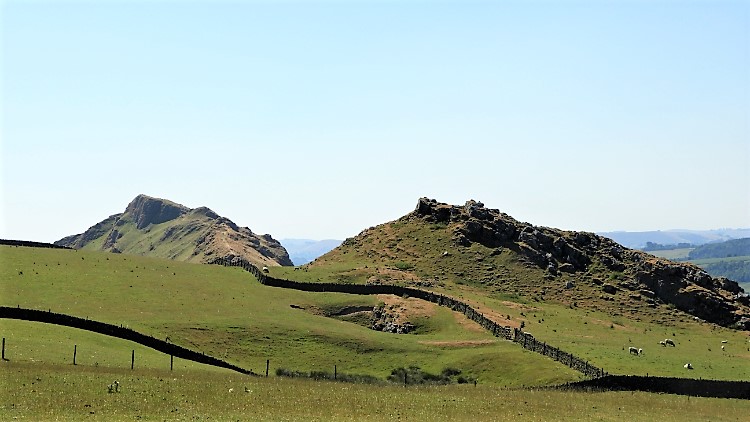 I followed the road beyond lovely Dowel Dale, from Owl Hole for another 500 metres. While I walked beside the quiet road I focused my eyes to a high edge on the right. Appropriately the hill I looked to was High Edge, probably an outlier of the Parkhouse Hill and Chrome Hill reef knoll. It is directly in alignment with them. I climbed up a slight gradient along the road, closer to High Edge and just over a cattle grid before I turned left, leaving the road and following the access track towards Stoop Farm. I ascended as I followed the track. Slowly but surely Chrome Hill revealed itself, now set in line and looking almost identical to Tor Rock which I approached from the north. 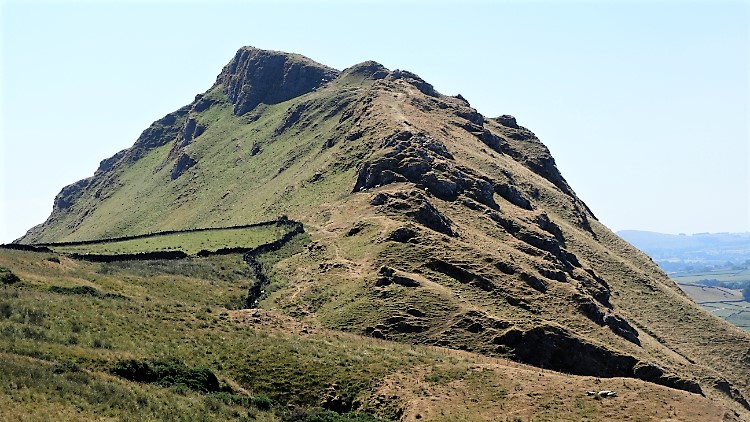 The spine of Chrome Hill 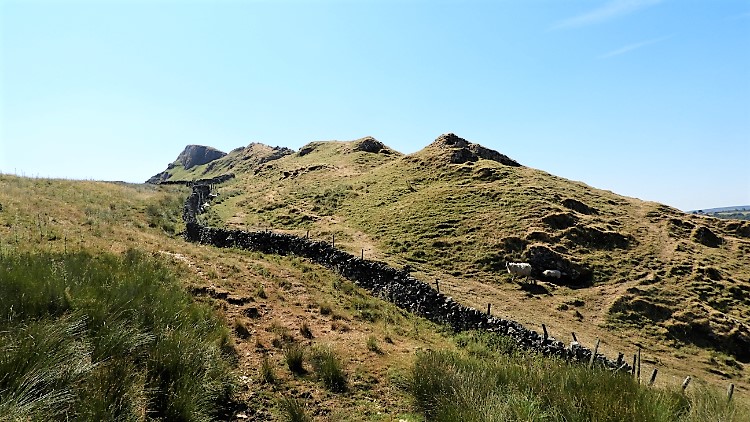 I reached Tor Rock and then I walked past Tor Rock hoping for an easy approach to Chrome Hill. It was stifling, around 11.00am and with the sun reaching its midday peak. No such luck for an easy walk though, a sharp descent faced me. I could have, and perhaps I should have, followed the access track a little further and around the south side of Stoop Farm to meet the permissive Chrome Hill approach footpath. But no, I had free ranged the north and east side of Tor Rock and thus I was forced to follow the short grassed, steep and slippery path down a field side from a small farm reservoir to meet the official way and get through the same gate I had reached Chrome Hill by fourteen and a half years ago. It was slippery too. I took the utmost care to descend a bit over 50 metres in 120 metres of walking. I made it unscathed, backside unmarked by green stripes of fresh grass. Now for Chrome Hill. 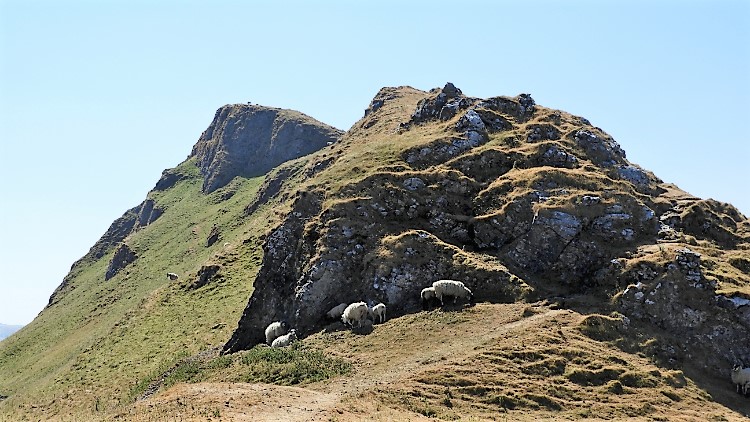 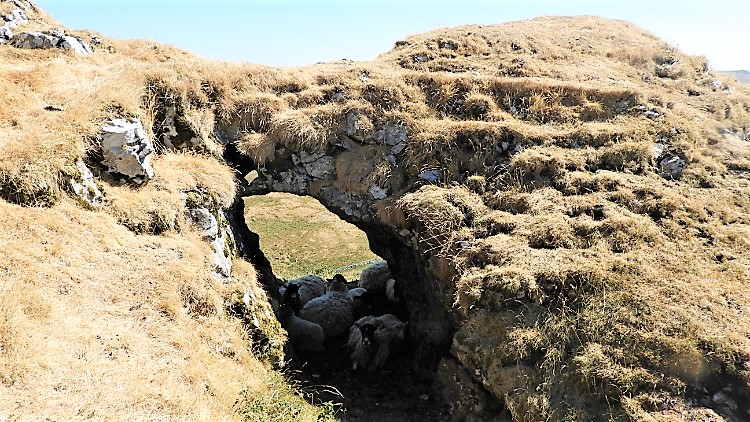 Sheep sheltering from the sweltering heat

I climbed the north west face of Chrome Hill, directly along the gnarled spine. This part of Chrome Hill resembles the outline of a Stegosaurus, scaled by hard and somewhat sharp outcrops along the spine of the hill, causing me to deflect from the straight line as I clambered upwards. As I climbed my way up the hill sheep attentively watched me. Like the more domestic field sheep of earlier, these free rangers also sought out shelter wherever they could. All were sheltered in the ridged shade spots, Soon after completing the climb to the ridge top of Chrome Hill and soon after a few gasps of breath to recover I came to a natural arch which offered more permanent shelter from the sun. The arch was cram packed with sheep. About eight, unsheared sheep were huddled together, out of the rays of the baking sun. Who could blame them, their fleeces must have been tortuous in the conditions. 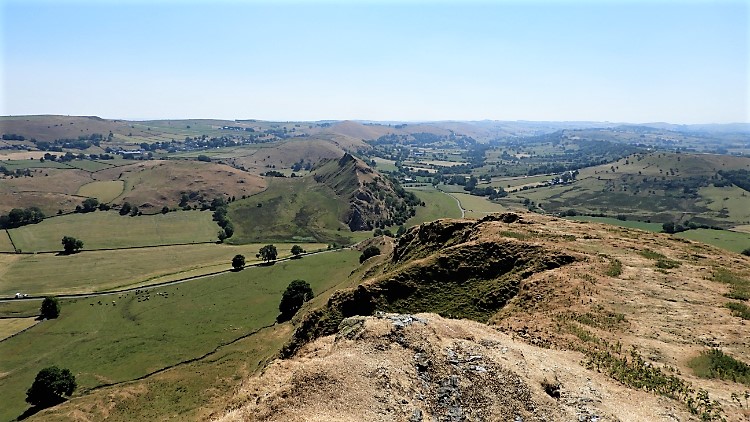 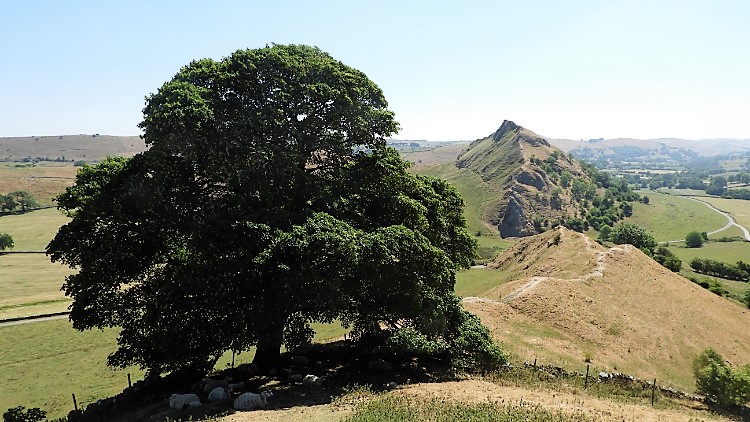 The path leading down from Chrome Hill

I left the sheep in peace and carried on walking along the top of Chrome Hill. Climbing done for the time being I took in the views provided from the top of this marvellous hill. Looking back along the ridge line and north west was the perfect line of Hollins Hill. "Must climb that one day" I thought. Due north was High Edge I had been near too earlier. South west in the dale was the hamlet of Hollingsclough. Best though was the view south east, along the spine of Chrome Hill and continuing to the spine of Parkhouse Hill. I envisaged my walk continuation as I looked along the line. Following the line across Hitter Hill I could see East Sterndale, my end goal. Much to enjoy first though. Foremost was the climb down from Chrome Hill which was easy enough though a little steep in part and thus requiring some care at times. As with my descent down for Tor Rock I stayed on my feet during my entire descent from Chrome Hill. Quite unusual for me that. 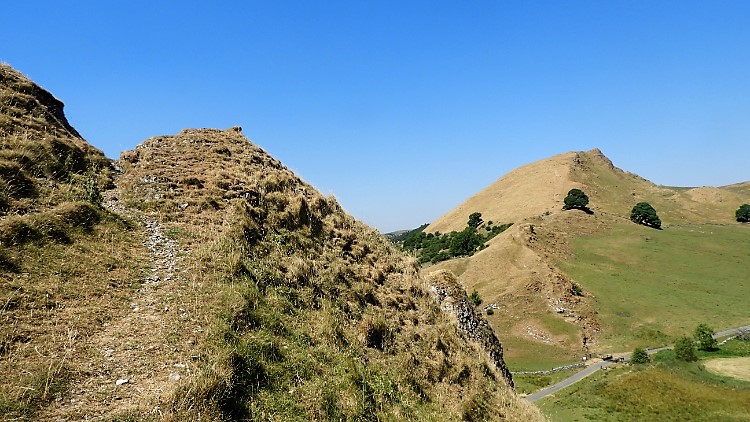 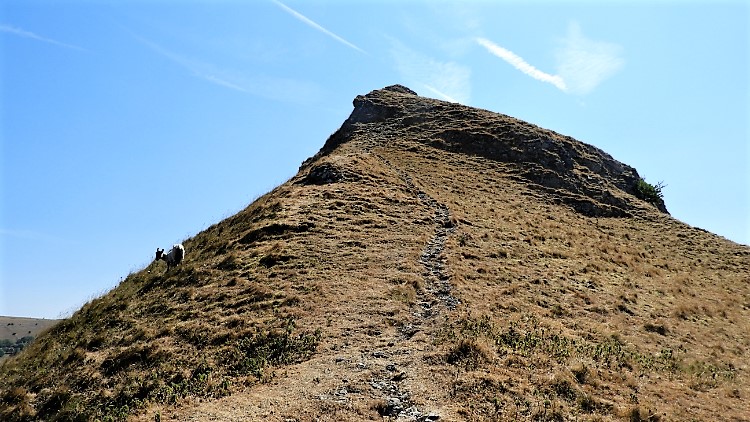 For many years access to Parkhouse Hill was difficult, as there was no right of way to the summit. I remember that being the case when I had first planned to climb the hill, abandoning it as I was under the impression it was private. The Countryside and Rights of Way Act of 2000 changed all that, I could have completed it in that January day of 2004 but we had done enough walking in and out from Buxton on a snowy day. Now was the time. Even now accessing Parkhouse Hill from the north west approach was still difficult. A steep limestone cone guards this side of the hill and i had to round the cone by the north side to reach a path showing the popular climb to the top of the hill. followed it up in three or four short spurts, taking short breathers between them. It was still steep, a climb of about 75 metres in total. Any metre was tough in the heat, now seemingly high 20's and with no breeze at all. even on the hill top. 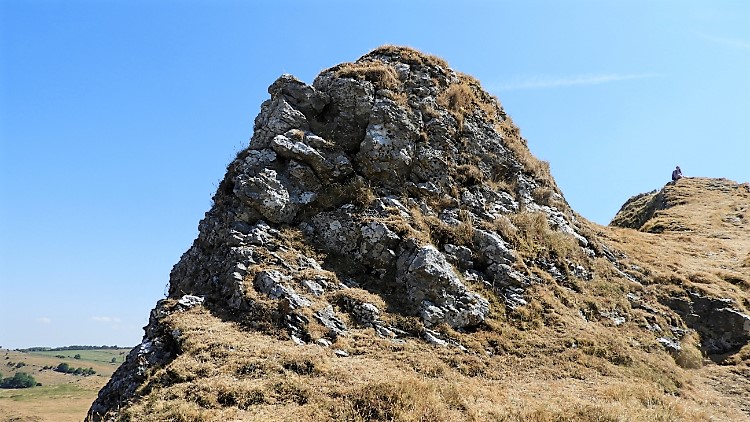 The limestone tower of Parkhouse Hill 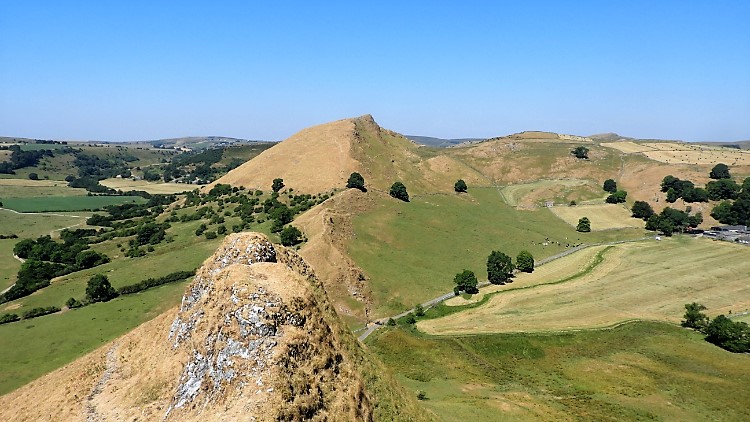 I had reached hilltop beyond the top of the north face cone of Parkhouse Hill, a cone which has always impressed me. My emotion led me back along the ridge, away from the line of my route. Shaped by currents when under water and by land erosions when surfaced, both experienced over millennia past, I just had to touch the near perfect shaped rounded top. It was a lovely moment for me. As I turned away from the cone I noticed a walker sat on the ridge line of the hill, possibly at the highest part. I walked along and up the ridge to meet a young lady enjoying the day as much as me. She had been sat peacefully and meditating the scene so after brief pleasantries I left her and found a quiet perch a little further along the ridge for myself. I too sat down for a short contemplative break and for refreshments. Everything was beautiful; the walk, the setting, the atmosphere, the unbelievable weather. 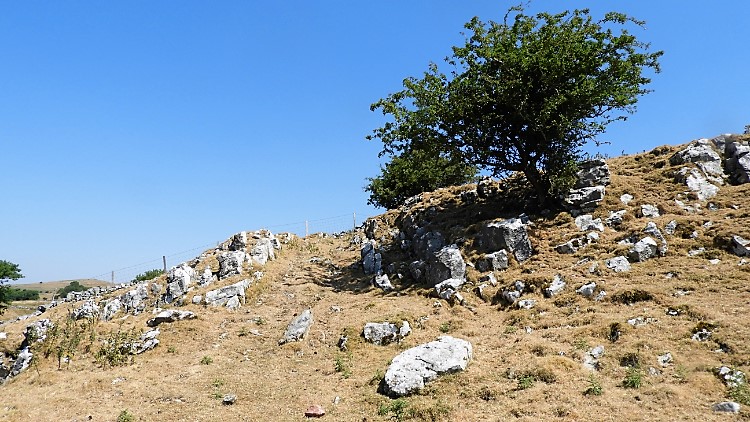 On the flank of Hitter Hill 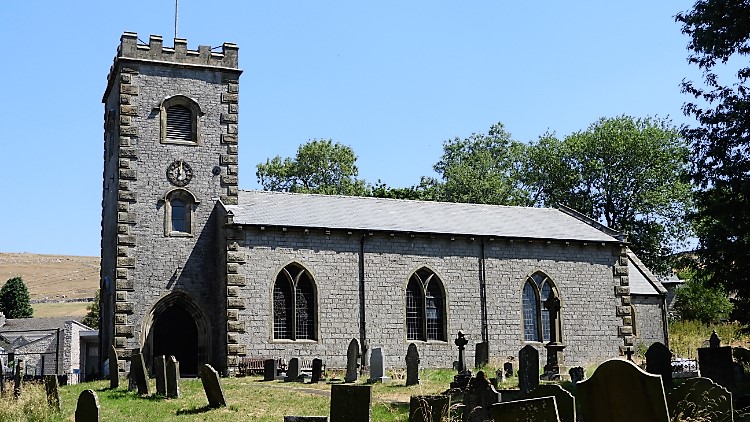 I stayed for a while on Parkhouse Hill before setting my stall in climbing down and making my way home. It was as steep a descent as from Chrome Hill and again i got down without a slip. "Well done me" I thought. Across a field and across a road led me on to the n0orth west flank of Hitter Hill. The path led me around rather than over and then across a couple of small fields back to East Sterndale. I came into the village by 'The Quiet Woman' public house which looked very quiet indeed and probably in need of a lot of tender loving care. Across the road from the pub was East Sterndale Church. Parked near the church was my car. I made sure the air conditioning was set on full. I needed cooling down from the ecstasy of the walk, thrilling throughout, and from the uncompromising incessant heat of the day.