Summary: Follow paths from Llyn Dinas past a copper mine to Beddgelert before following the Pass of Aberglaslyn to Nantmor. Then there is a good climb over Moel y Dyniewyd back to llyn Dinas. On the mountain you can explore old mining workings. 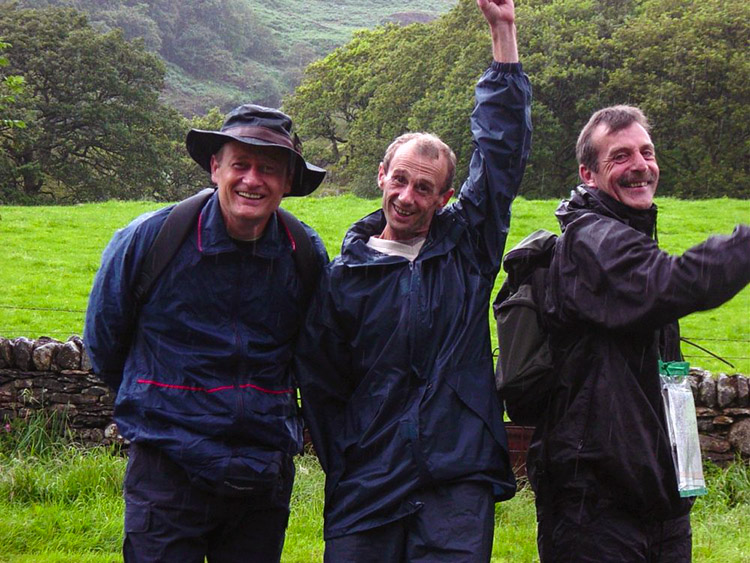 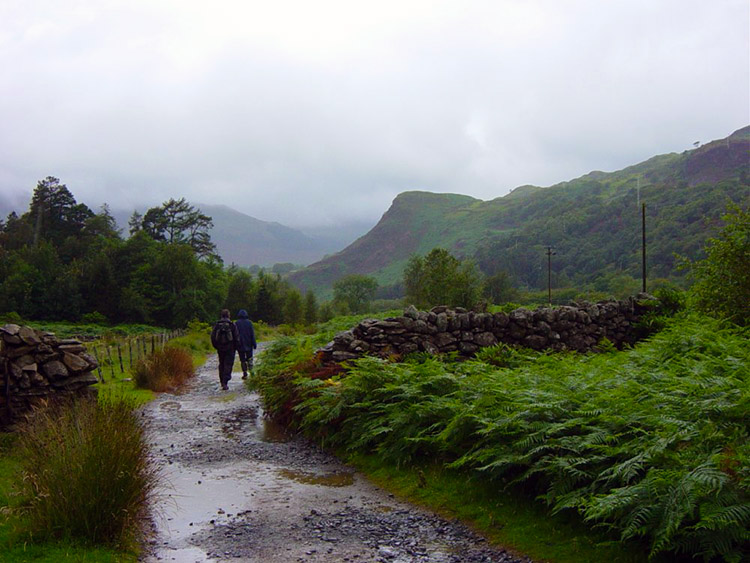 Walking from Sygun Copper Mine to Beddgelert

Oh this walk was so funny. The previous day on Tryfan I had slightly miscalculated the map which led us astray for around an hour (see Tryfan Walk) This had led to Steve and Dave seizing the map from me today. OK, I bite the bullet and accept the criticism but my desperate opportunity for revenge was not as far away as I expected. We decided to do a walk around the town of Beddgelert when we woke to overcast skies and drizzly rain. Snowdon itself would have to wait a little longer. The boys planned a predominantly lowland six mile walk starting from the car park just off the A498 on the western edge of Llyn Dinas. As we drove to our starting point from Llanberis the rain seemed set in and predictably we set off walking in heavy drizzle past the Sygun Copper Mine just as it was opening for its now dependent tourist trade. The boys walked on a level route directly to Beddgelert along paths, bridleways and roads that were the lined by hedges and trees of the deepest green, a reward provided to the Snowdonia area by the copious amounts of precipitation it receives. We arrived at Beddgelert and followed the A498 into town. 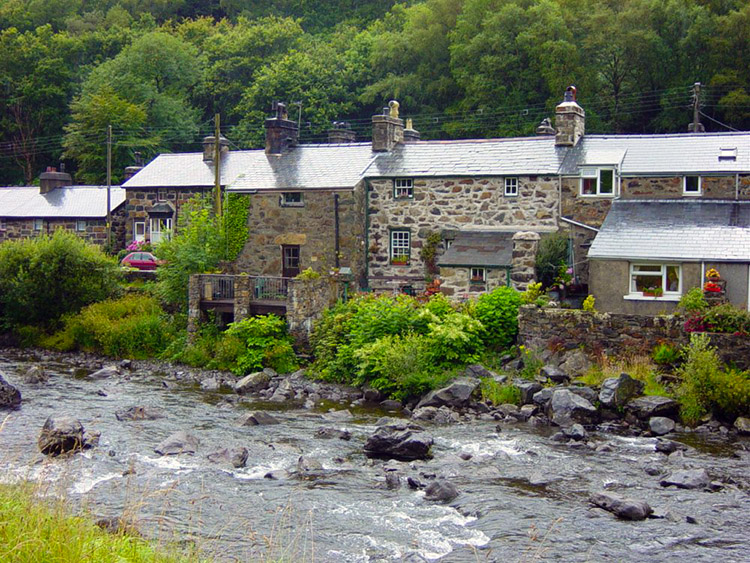 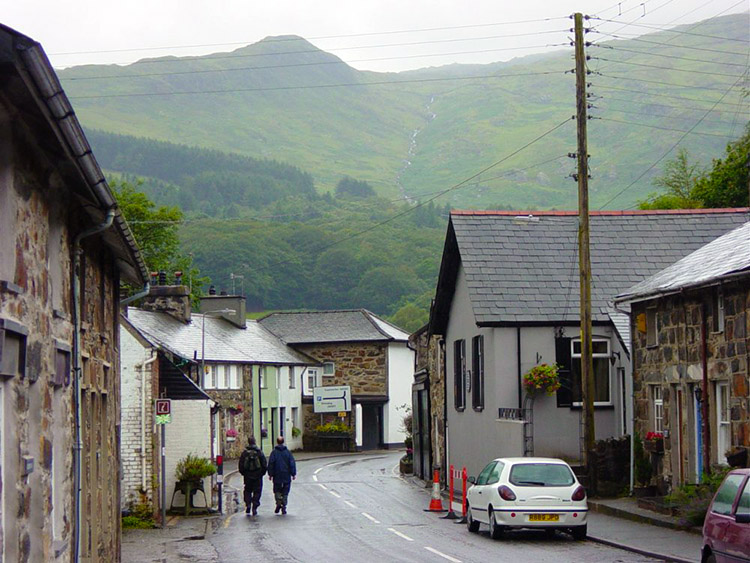 The town is nice, all buildings being built of natural Snowdonia stone. It was already beginning to bustle with tourist trade despite the crap weather. The plan was to now follow the Afon Glaslyn upstream to the derelict railway tunnels and Pass of Aberglaslyn and then take a left fork over the Cwm Bychan mountain pass to our starting point at Llyn Dinas. And so we found the river and proceeded to follow it upstream. About half a mile upstream of Beddgelert I came across a heron in the water. It was as still as can be alertly waiting for a meal to come along. At first Steve thought it was plastic model, its motionlessness causing his first error of this easy walk. 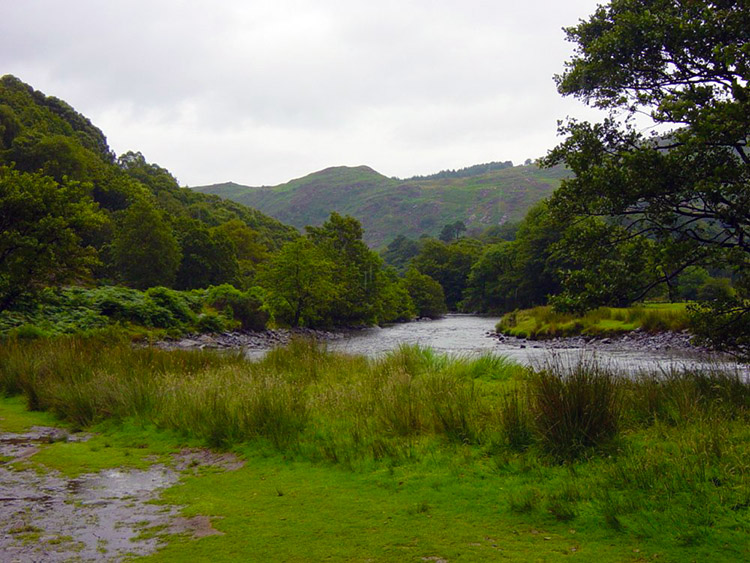 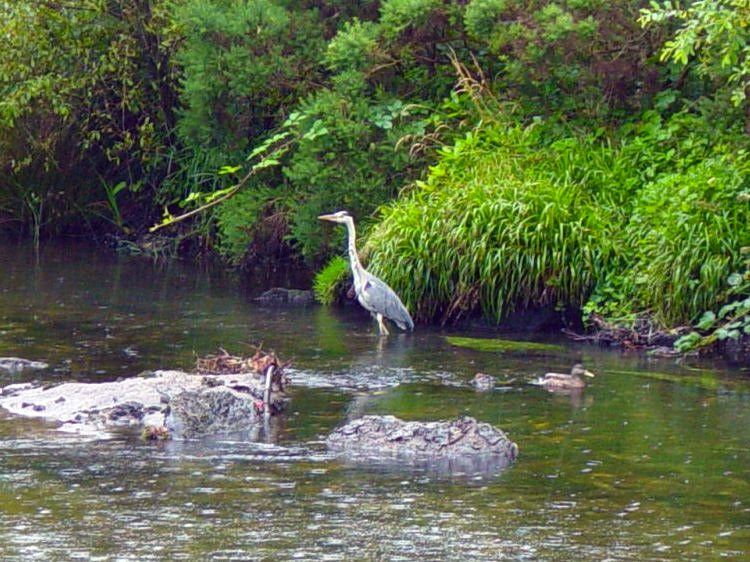 A heron fishing in the Afon Glaslyn

The path was clear to follow and we soon reached the old railway tunnels cut out of the hillsides. It was pitch black inside the main tunnel and we had to slowly walk the 200 metres length focusing on the 'light at the end of the tunnel'. We reached the end and the boys re-evaluated the map. They decide we must keep a direct path keeping to the same heading. MISTAKE 1. We follow the path for about another half mile until it abruptly ends where a bridge crossing a road used to be. They re-evaluate again and decide we must get onto the road. MISTAKE 2. We scamper over barbed wire fences and down an embankment to the road. We are somewhere near a village called Nantmor but we don't see it and after walking on the road for a short while the boys decide to cut inland taking a westerly direction. 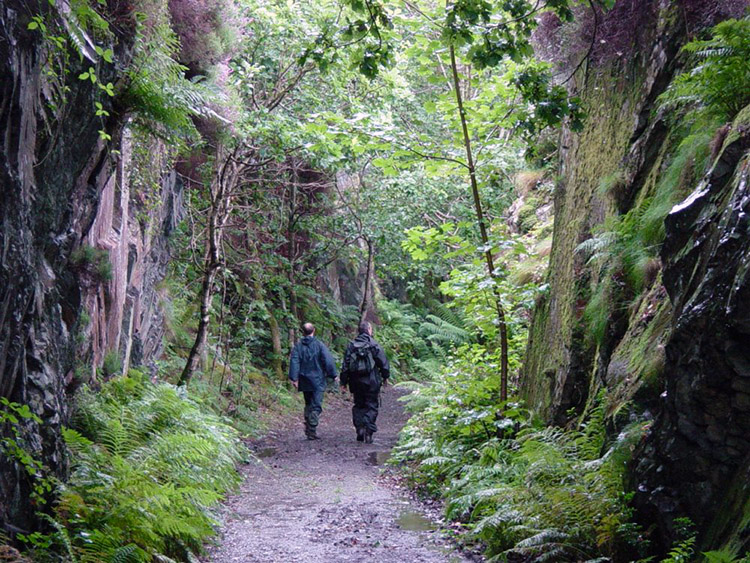 The Pass of Aberglaslyn 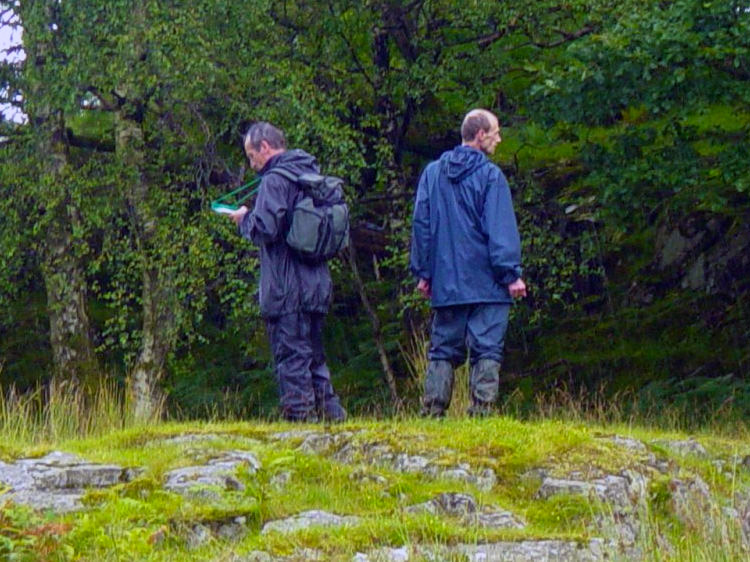 They keep looking at the map looking for inspiration but it is not to be found. They are lost. We spend the next mile or so in fields and small woods finding sheep tracks then loosing them again. Eventually we reach a road but where are we? They look at the map again but cannot fathom out where they are. As they are doing so I look at the nameplate to a house we are stood near to. It says Bwlch-llechog. They are hopelessly lost now and try to blame the lack of clear indication by way marks. Incredibly they even ask me to look at the map. As I do so I notice Bwlch-llechog clearly marked on the map. I point it out to them and as a result I save the day. They begrudgingly accept my findings. 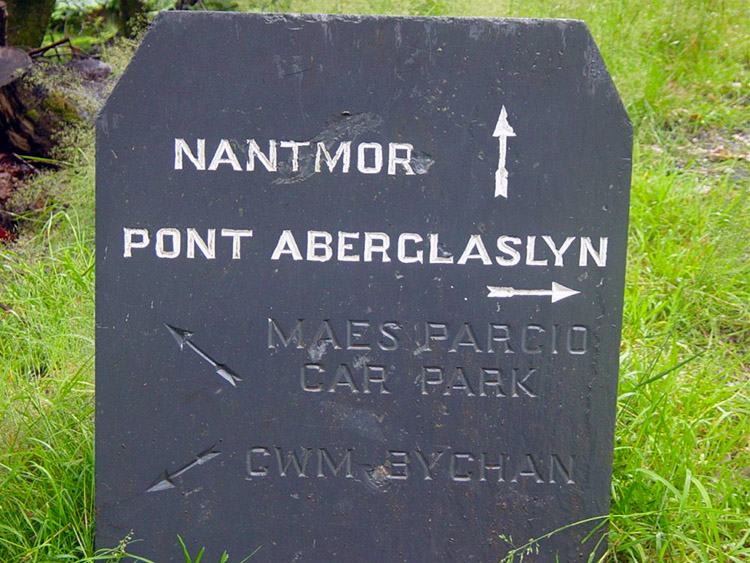 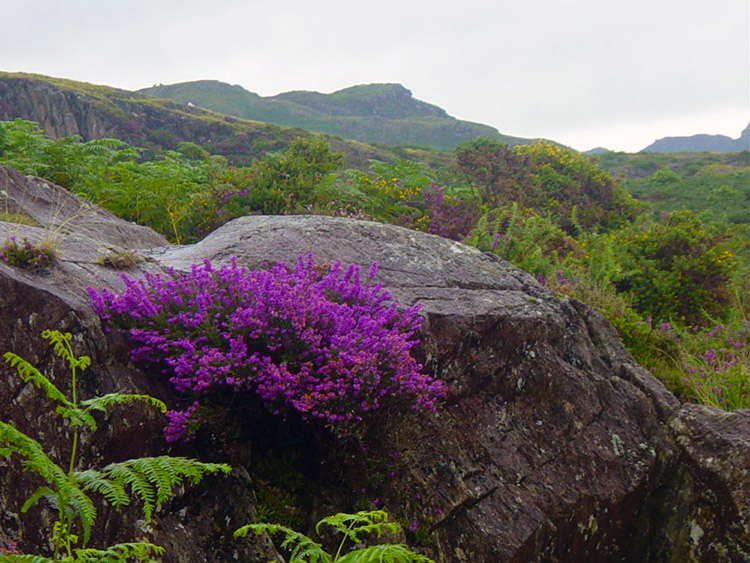 Now we know where we are it is an easy job to follow the road north-west to Nantmor. We walk for a mile into the village and take a short break. We then continue in the same direction back to the Pass of Aberglaslyn. We meet the path we lost earlier and walk back to the entrance to the long tunnel. It was at this point we should have turned off as a slate sign clearly indicated. The lads are totally baffled they did not see it earlier. By this time the rain has stopped but it is still damp in the air. 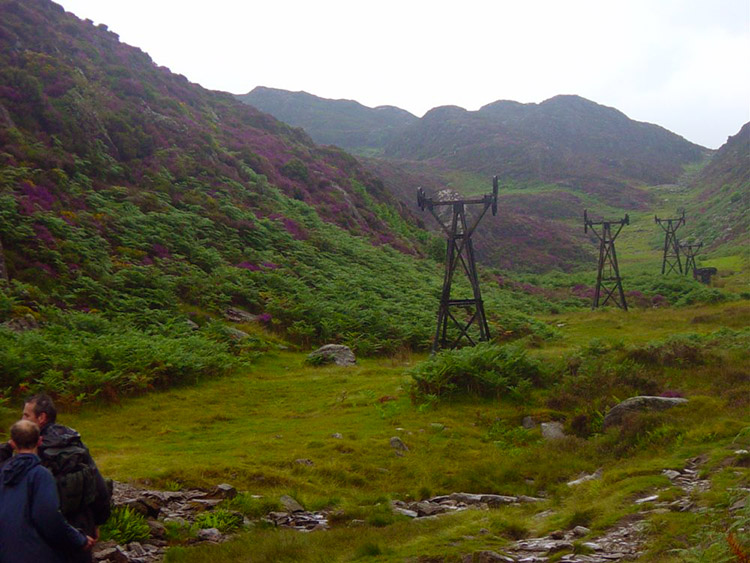 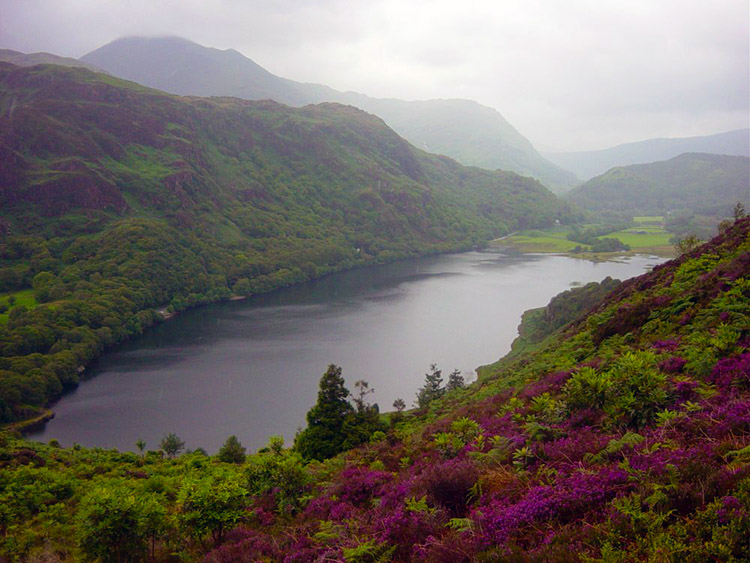 Looking down from Grib Ddu to Llyn Dinas

We start to make height over the pass back to Llyn Dinas and past a disused tip. They make no more navigation errors but I have had sweet revenge. Bliss! After the tip we walked uphill a little more until we reached the top of our climb near Grib Ddu from here we had fantastic views looking down on Llyn Dinas. We walked down to the edge of the lake and then followed a track through bracken back to the car. What a fun filled walk we had today.