Summary: I have climbed Sugar Loaf from Abergavenny and once from Crickhowell via Llangenny. Which way is best is subjective but I think the ascent from the west and descent on the east slopes with Abergavenny, the Skirrid and Blorenge in view as you descend to be the better option if choice need be made; you could always do the opposite next time. This walk begins on the outskirts of Abergavenny where there is street parking on Chapel Lane and Pentre Road near to the start point on the junction of Pentre Road, Pentre Lane and Chain Road. From the start the walk skirts the south west slopes of Sugar Loaf on roads, along tracks, through woods and beside rivers to Llangenny before the ascent of Sugar Loaf begins. Steep at first and then easier after the tarmac road ends the ascent provides lovely views of the Brecon Beacons back to the west. After the summit attention turns to the east slopes of the mountain, to Abergavenny and its surrounding countryside, a spectacular view to enjoy on an easy walk down back to the starting point of the walk.

The Walk: There are some mountains which beguile me when I first see them and Sugar Loaf is one of those mountains. It is not one of the biggest mountains in Britain or indeed in Wales. It does not have any prominent rocky crags, cliffs or outcrops either, it being a predominantly grassed mountain. But what it does have is shape and location. It is a neat conical hill, almost pyramid like in shape and its sits alone, isolated from the giants of the Brecon Beacons and Black Mountains which neighbour it. It is also sited directly to the north west of Abergavenny, a pretty market town which acts as a gateway to the South Wales mountains. Abergavenny has two other mountains/hills surrounding it which form a triangle of some defence from storms. These are Blorenge to the south and Skirrid to the north east. Though this walk focuses on Sugar Loaf I recommend walks to each of them. For now though let's begin the Sugar Loaf walk. 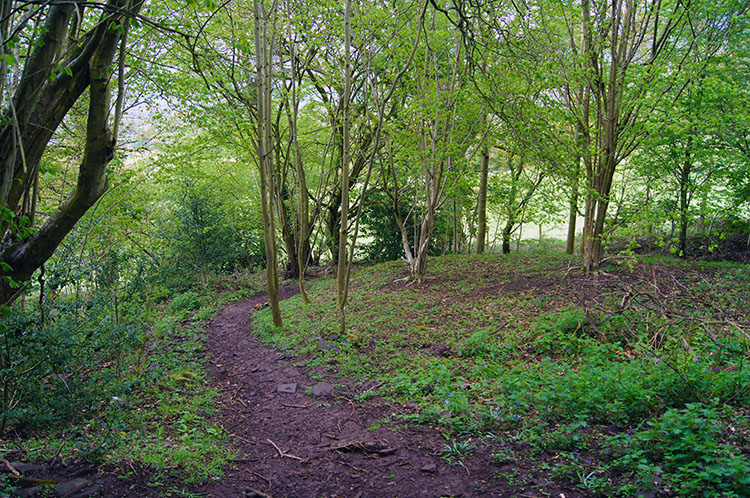 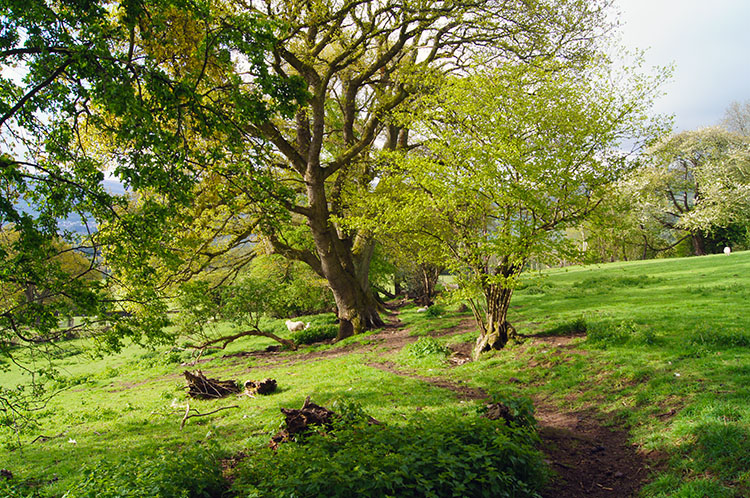 The countryside near Llangenny is beautiful

Start out by walking west along Pentre Lane to Orchard House; you will be unlucky to encounter traffic as you do so as these roads are extremely quiet. After Orchard House continue following the road west and then north for 200 metres before forking off to the left and following a track past Tyrewen Farm to Llanwenarth Breast. Then continue on a course west to reach the Graig Plantation which is followed for a while before turning from west to north and up through and out of the plantation and then across fields to Pen-y-Graig. Continue west and then north on a bridleway to Cwm-cegyr before turning west once more and walking on tracks and then along a lane to Hall Farm. From Hall Farm follow the road to a junction and turn right. Then follow the road for a short while and turn first left to reach a bridge over Grwyne Fawr. Leave the road and follow the west bank of the river upstream to thew quaint hamlet of Llangenny. (Note - I have not done this section of the walk - it is my recommendation for a circular walk. I have walked the remainder and from here my report is written with personal reflections) 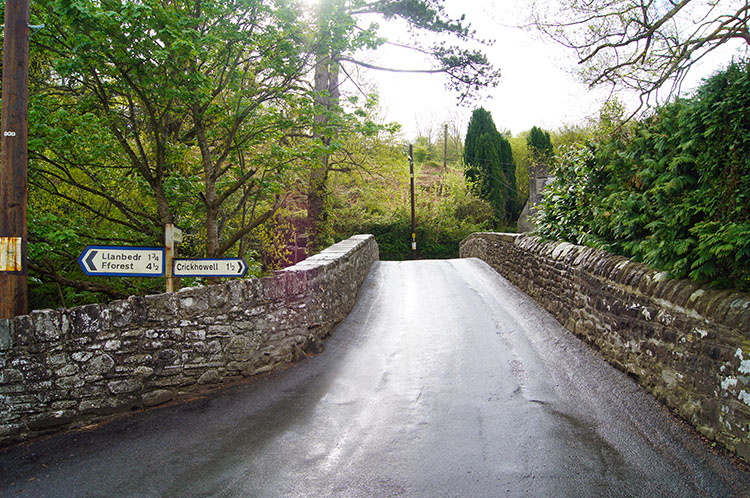 The bridge over Grwyne Fawr at Llangenny 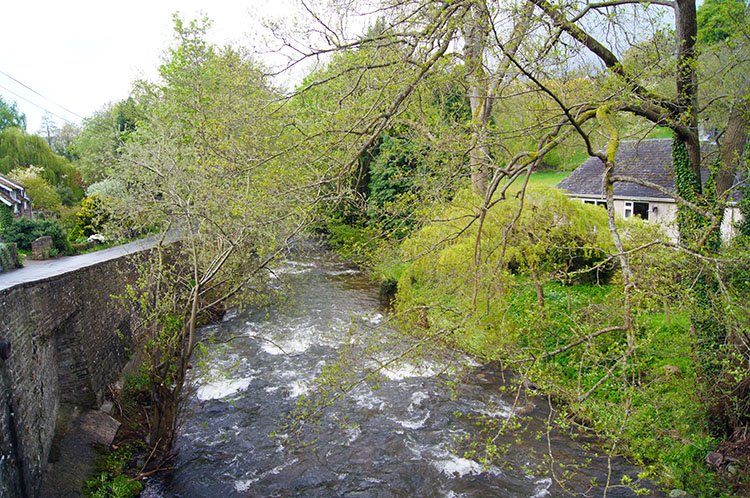 I reached Llangenny after setting off from Crickhowell on stage 16 of my 18 stage walk from Conwy on the north coast of Wales to Cardiff Bay on the south coast. During my walk from Crickhowell I experienced an early morning shower but by the time I reached Llangenny the clouds had parted and the weather was set fair. After crossing the bridge over Grwyne Fawr in the quiet village the steady ascent up the dead end road to the western slopes of Sugar Loaf began. 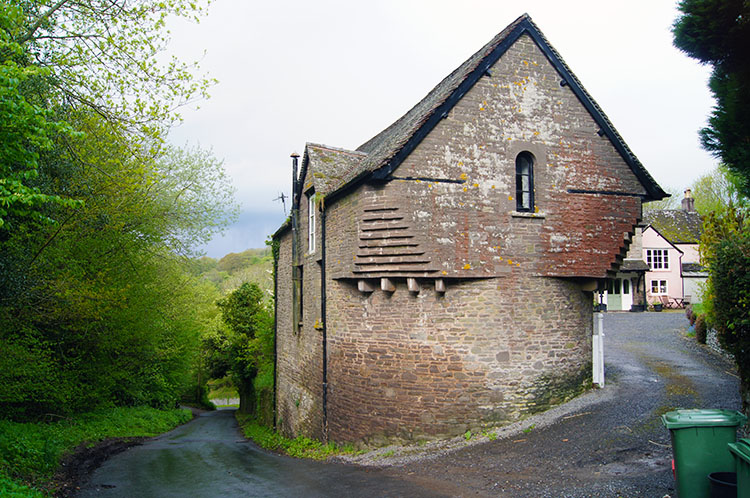 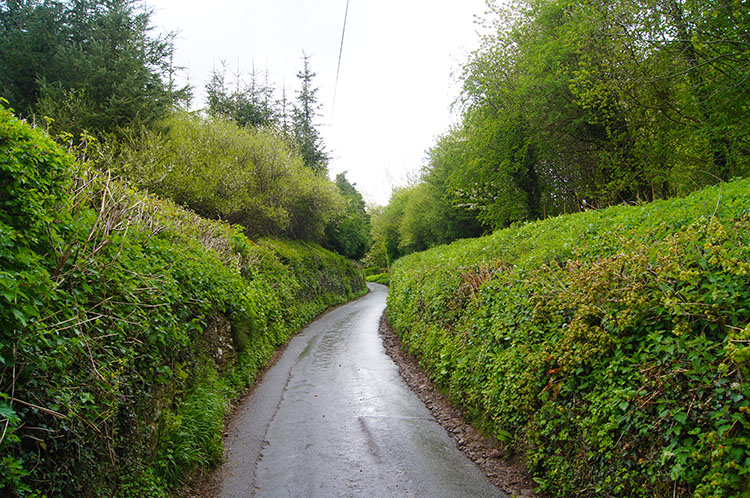 Hedgerows beside the road to Sugar Loaf from Llangenny

The walk up the road was a constant incline. In half a kilometer I climbed 75 metres to a crossroads and in the next kilometer I achieved another 100 metres of ascent by which time I had run out of road and was now walking beyond the last farm on the road and across a field to a height of just short of 300 meters elevation. On the road section I had been enclosed by a variety of high obstacles, a mix of walls, small copses and thick six foot plus hedges. Birds sang as I approached and passed them, all happy in the first signs of Spring which was arriving late this year. 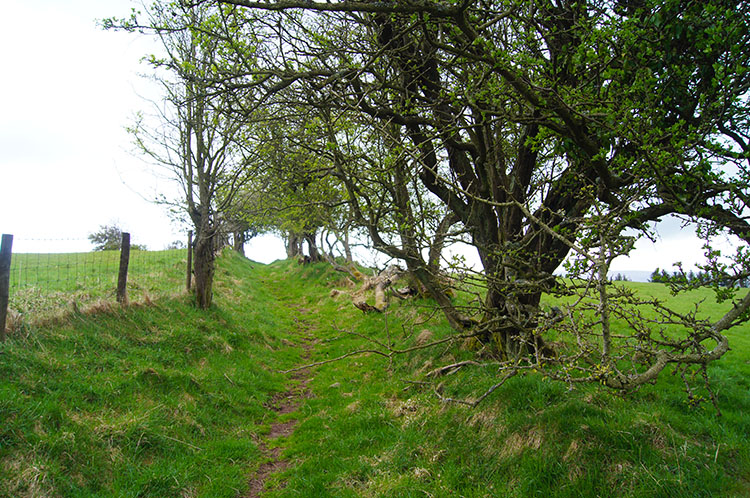 The track leading to Sugar Loaf from the road 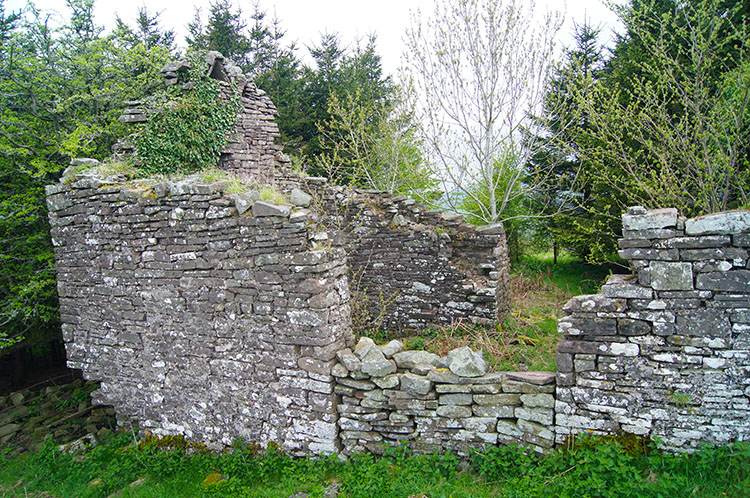 Abandoned building on the west slopes of Sugar Loaf

After the first field which was a steep one I reached a clear path with a fence to my left and dispersed hawthorn trees to my right. The steady climb of the western slopes of the mountain continued to 350 meters when I came to some derelict buildings. The roofs were long gone as were the tops of the walls but the bottom structure of the buildings remained, temporary shelters for walkers on inclement and windswept days. Soon after the site of the old buildings I turned from a west to north course and as I did so the enclosed views of being at lower heights gave way to sublime panoramas. 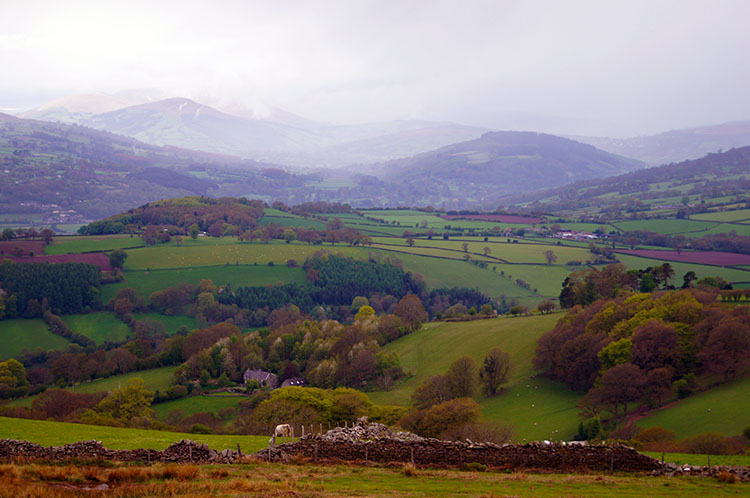 Looking back west to the Brecon Beacons 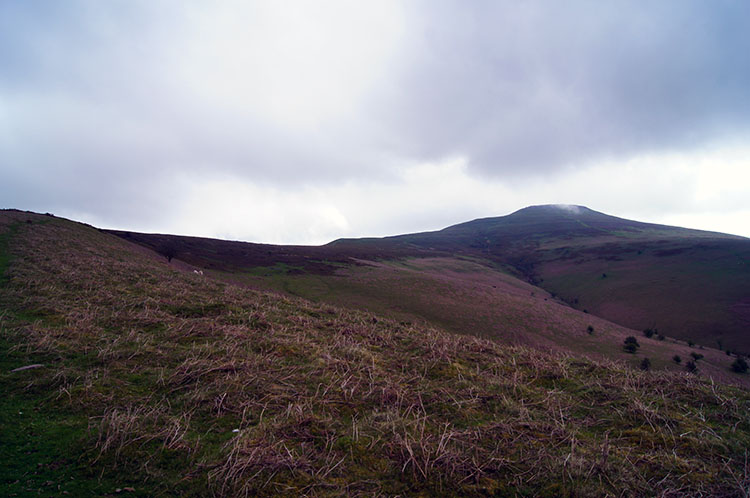 The summit of Sugar Loaf comes into view

My first thoughts were to look back north and west in the direction I had come on my journey of Wales. I looked west to Craig y Cilau where I had been yesterday and to Darren Cilau where I had sat and watched young rock climbers practicing their fledgling skills. I looked to the cliffs of the mountain which I had traversed the top of from west to east before finding the safe path down. I looked further through the distant haze to the faint profile of Pen Y Fan, snow topped after the storms of two days previously which kept me from crossing the mountain. instead I had to follow a course to the north of the mountains. I mused that next time I return I must climb Pen Y Fan. then my attention returned to the immediate task, the ascent of Sugar Loaf and as I looked at cloud clearing the peaked top of the mountain I marched onward towards it. 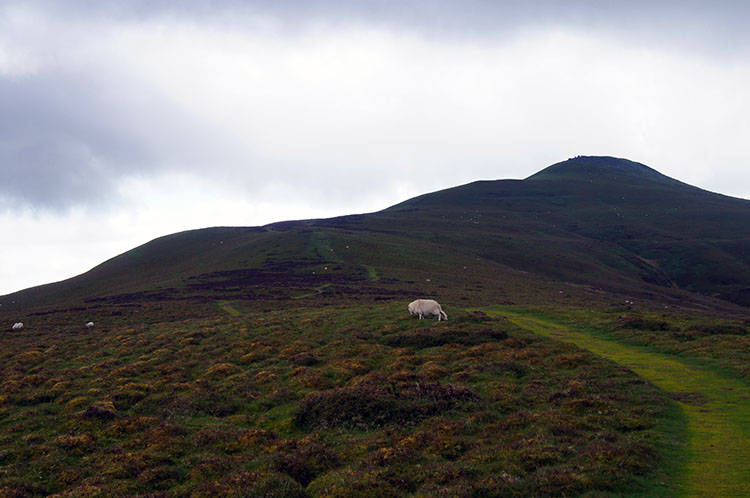 Closing in on the summit of Sugar Loaf 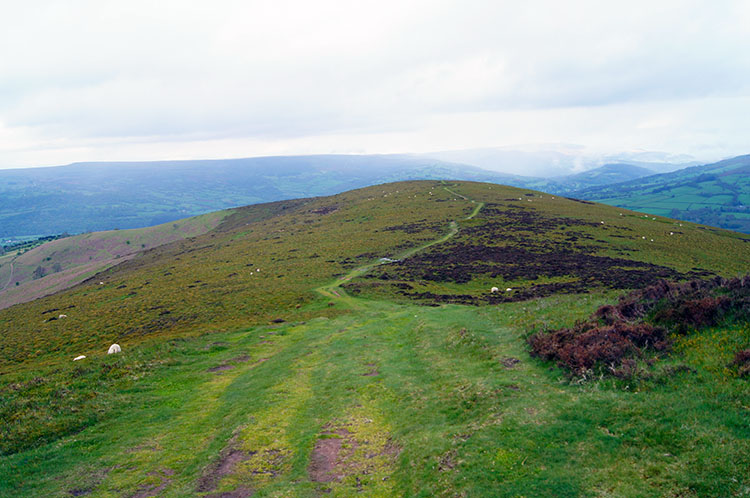 Looking back to the excellent track up Sugar Loaf

At first I did not make any progress towards the summit at all as the path took me on a north west course leading me further away from the summit. This direction took me along for 400 metres and during the north west passage I lost 20 meters of height I had earned. But in compensation it kept me on the defined path a led me to a direct course due east which would take me directly to the top of the mountain. And on a wonderful short grassed wide path which was well maintained by the mountains resident sheep. They were doing a splendid job in maintaining the path. 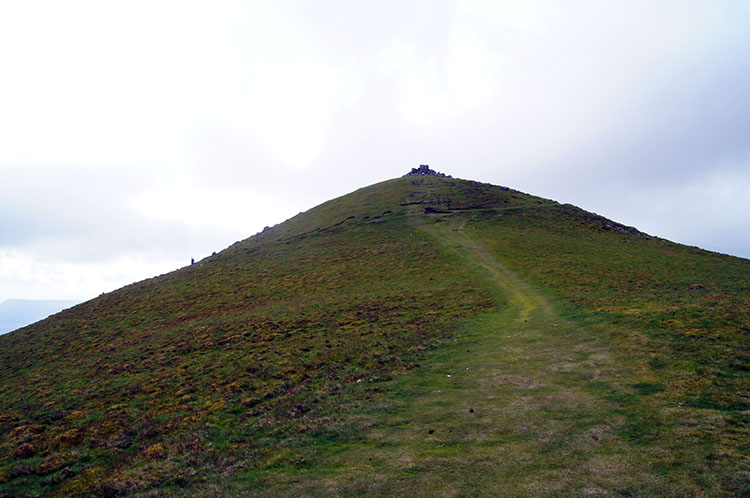 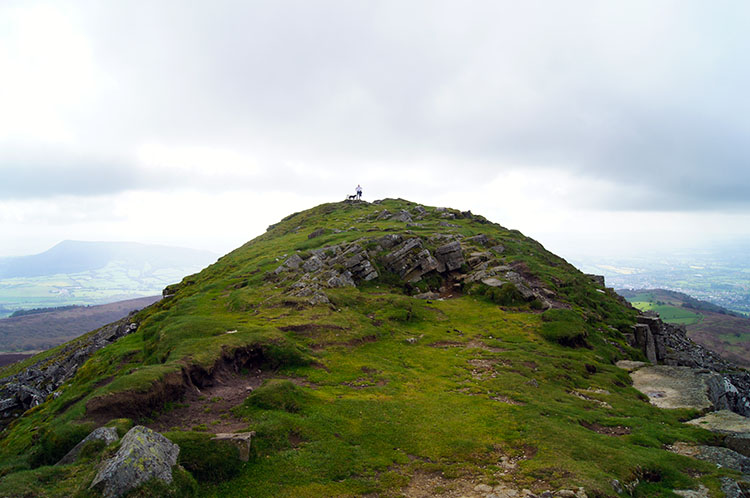 I walked steadily up the gentle slope of the mountain and past groups of sheep, each group parting to a distance away from the path which was sufficient for their comfort until I had walked on by. I continued to walk on, eyes focused on the summit and as I drew closer I could make out a small rock outcrop showing the attainment point. Once there I knew I would be on the summit ridge having been on the top one before, as stated in the summary to this walk, on my previous walk up the mountain. It was overcast that day and the cloud on top prevented me enjoying the views. Surely I would fare better this time. 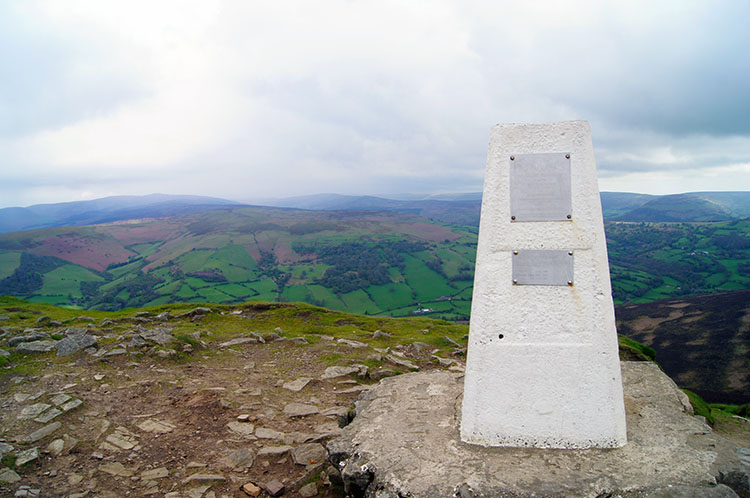 View from the trig point on Sugar Loaf 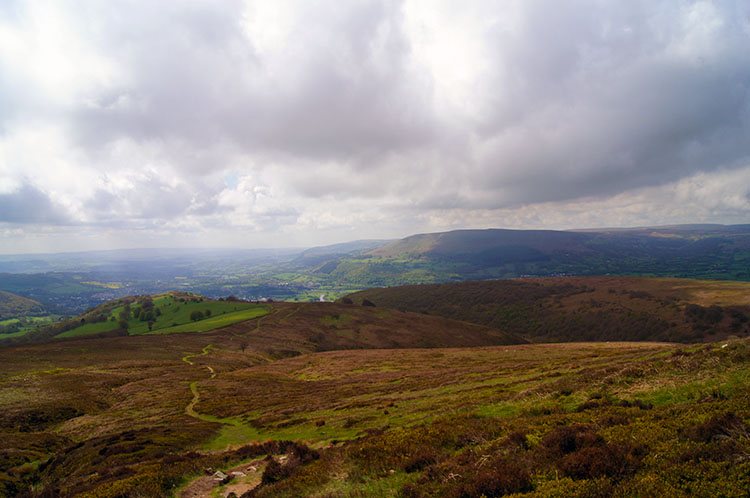 The way down is easy to work out

Half an hour after turning from my parallel course to the one straight up the mountain I was on the summit ridge and within view of the trig point. A bank of cloud had appeared in the sky as I made the ridge but it was high enough to leave the summit unscathed. It just blocked out the sun which had made brief attempts to bathe the mountain during my ascent. Should I wait a while? I did not need to question myself for I met a gentleman at the trig point who had taken a walk up with his dog from near where I was to finish. We talked for 15 minutes or so, about the beauty of south Wales, about the Brecon Beacons and about my walk of Wales. He talked about how he had moved to work in the area from the Midlands some years ago and in falling in love with the place he decided to stay. It was a proper mountain top conversation, during which the bank of cloud thinned and began to part. We bid each other farewell and the gentleman left first while I took a drink. Blue sky increased and sun began to glint through as I began my descent. 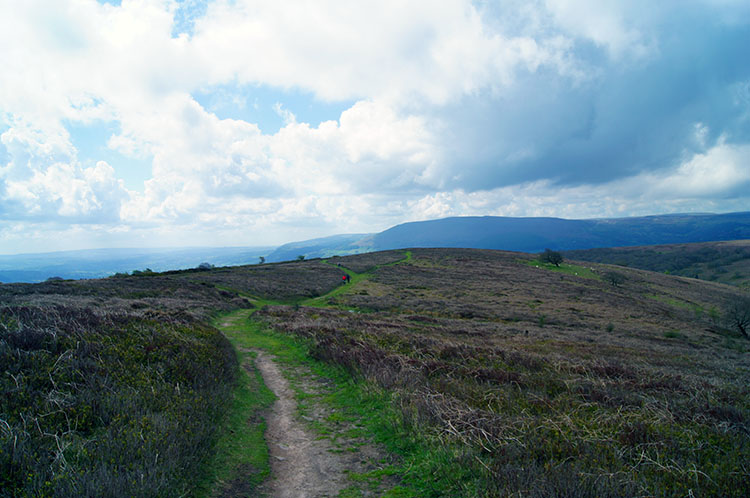 Following the path down towards Abergavenny 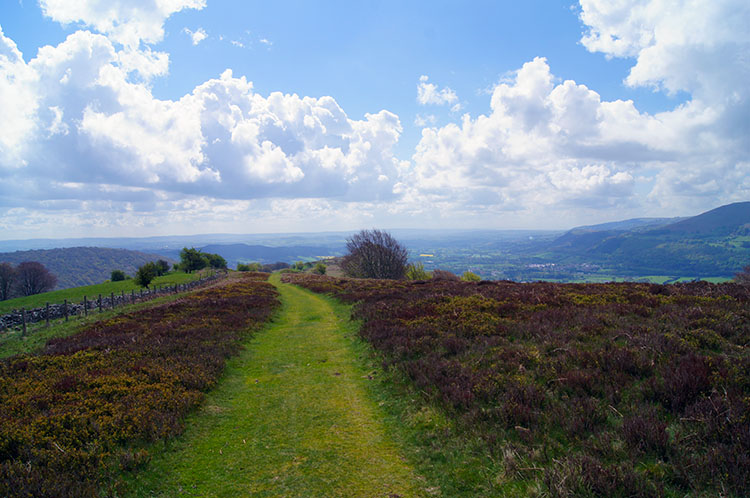 A wonderful sky beckons me towards the finish

As I followed a clear path on easy ground down the mountain I bounded along without a care in the world, a welcome effect the mountain imposed on me. As I continued down towards Abergavenny I looked towards the steep north facing slopes of Blorenge, the mountain due south of the town which was the next obstacle on my walking line to Cardiff. It did not phase me, I was unperturbed and really looked forward to the challenge. For now though I forgot of the climb ahead while I continued my enjoyable descent of Sugar Loaf, the exquisite mountain I was on. As I bounded on down, stopping on occasions to look back momentarily to the path I walked, I passed more sedate walkers. I was in the mood of a big kid - I even skipped for a while. 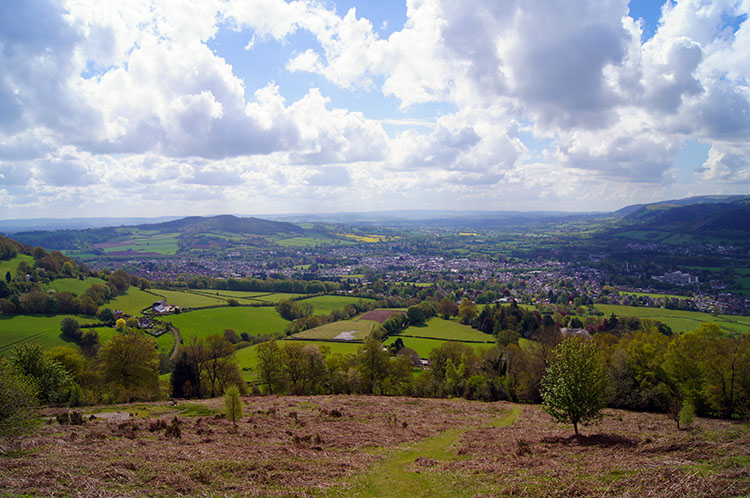 Abergavenny comes into view at Rholben 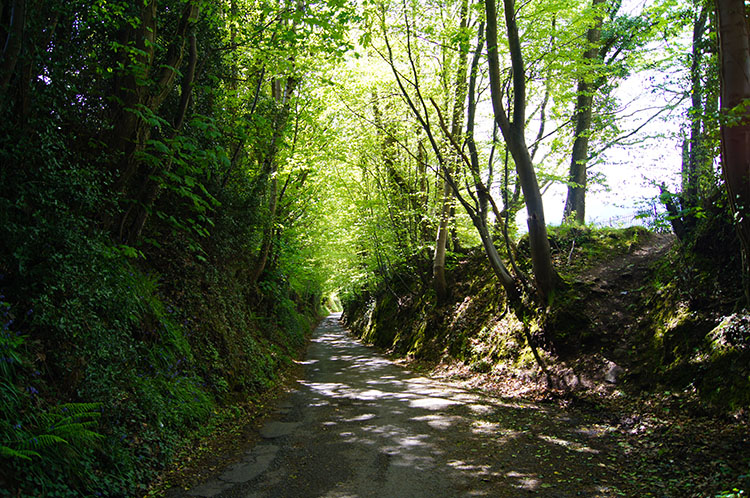 A Holloway road leading down into Abergavenny

On the more rapid than normal descent I looked straight on to the path ahead, to Sugar Loaf's south east finger which is Deri on the left and to Blorenge once more on the right. Then I looked straight ahead once more to be captivated by the rooftop views of Abergavenny and to the hump of Ysgyryd Fawr, more commonly known as the Skirrid directly beyond the town. These views continued to dominate my attention until I realised I was nearly down. And after one steep banked field I was down beside the road near Tyrewen. I followed the road which was part sunken Holloway to Home Farm and then followed a path which took me past Llwyndu Court to the junction of Pentre Road, Pentre Lane and Chain Road. My Welsh walk went on into Abergavenny and beyond. But for the purposes of my recommended Sugar loaf circular, the walk is done.