Summary: This walk is perfect for anyone who has based themselves in the popular small town of Crickhowell on the east side of the Brecon Beacons National Park as the walk begins from the town centre. After leaving the town centre the walk crosses to the south side of the River Usk and continues to Llangattock where the Monmouthshire and Brecon Canal is followed for 1.5 miles before leaving the canal to follow a south west course over fields, lanes and a couple of road crossings to reach Craig y Castell. Now on upland with splendid views the walk heads south east to skirt the south side of the impressive cliff face of Craig y Cilau before leaving the high ground at Darren Cilau. Then its more fields, lanes and finally road back into Llangattock and the return to Crickhowell. There's lots of variety to this outstanding walk.

The Walk: This walk was born from a mistake; an error in navigation which took me and my walking colleague Steve on a course above the cliffs of Craig y Cilau when I had originally plotted a course on the marked path which runs parallel to and just below the cliffs. From such mistakes are superb walks created and as a result both Steve and I revelled in the walk above the cliffs with brilliant panoramas of the Usk Valley, Black Mountains and Brecon Beacons to be enjoyed as we skirted around Craig y Cilau above the cliff line. There was more besides too, especially the enjoyable break watching youngsters learn to rock climb on the man made cliffs in the disused quarry at Darren Cilau. (Note: This walk is designed as a circular while I walked a linear route from Talybont on Usk to Crickhowell. This was stage 15 of my 18 stage walk from Conwy Castle on the coast of North Wales to Cardiff Bay in South Wales. When the description of this walk reaches Pencroeslan-isaf then my exact route is followed to the conclusion) 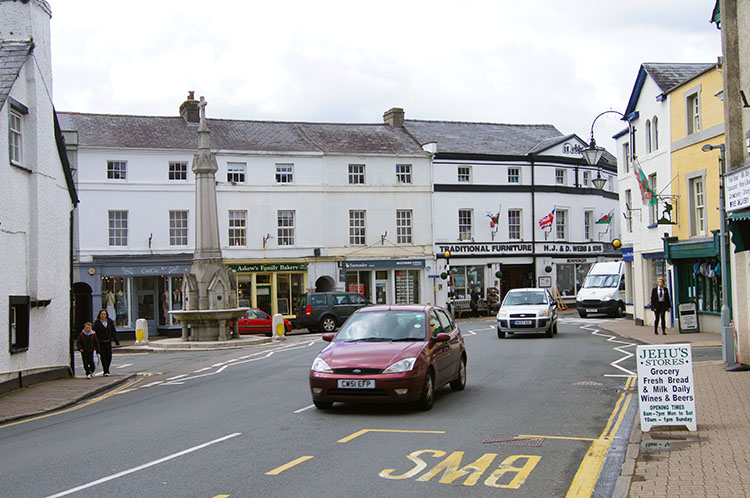 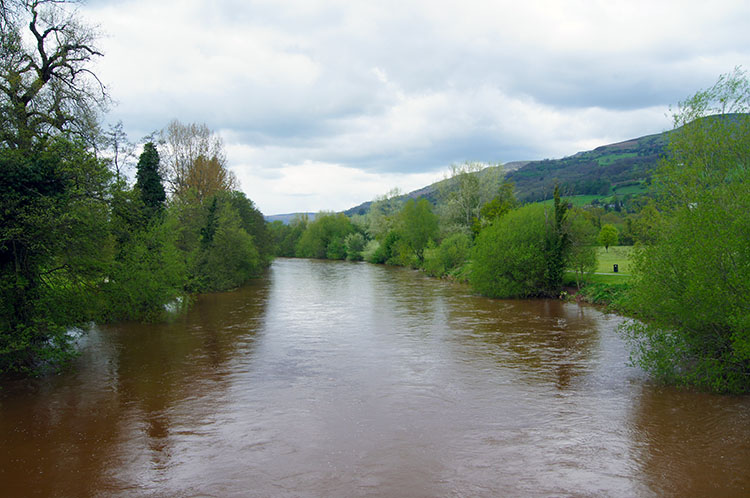 While I set off from Talybont on Usk on my linear Welsh Coast to Coast walk by following the Monmouthshire and Brecon Canal, this circular walk alternative also follows the canal. Instead of joining the canal towpath at Talybont follow it from Llangattock which is easily reached from Crickhowell by following the road straight over the River Usk by crossing Crickhowell Bridge and then walking on a path directly to and past Llangattock Church, then up a road and across a field to the point where the canal is met. 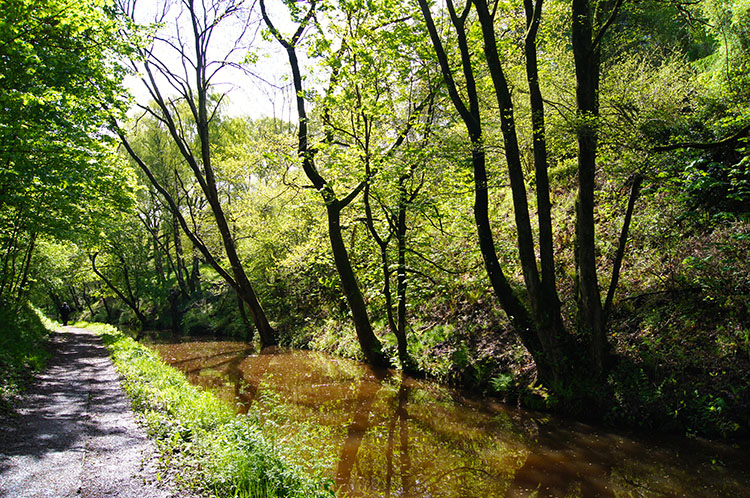 Ambling beside the Monmouthshire and Brecon Canal 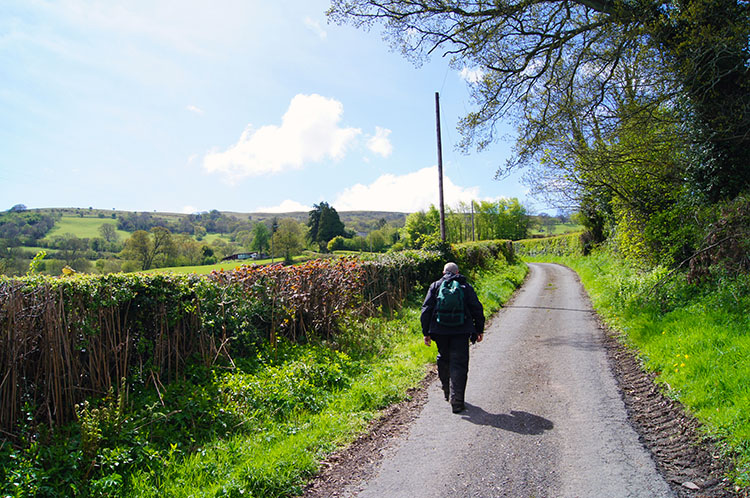 On a quiet road near Pencroeslan-isaf

After joining the canal towpath follow it north and then west toward Talybont. It's a lovely and gentle start to the walk. Then after following the canal for just over one mile leave it be crossing a bridge near a pumping station and following a track to Llwyn-celyn. The track forks here so take the path heading due south to Ty-Rachel and Ysgubor-neuadd, after which you come to a quite country road. Turn right at the road to walk west to Pencroeslan-isaf. Now you have joined me and Steve. We shall continue the walk together from hereon. 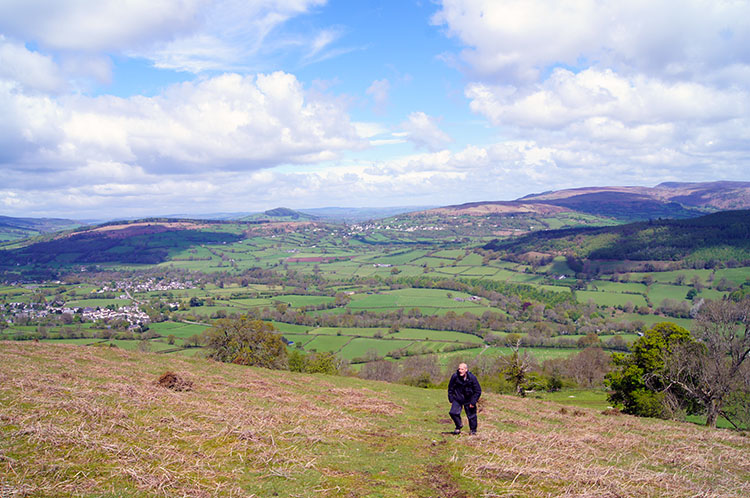 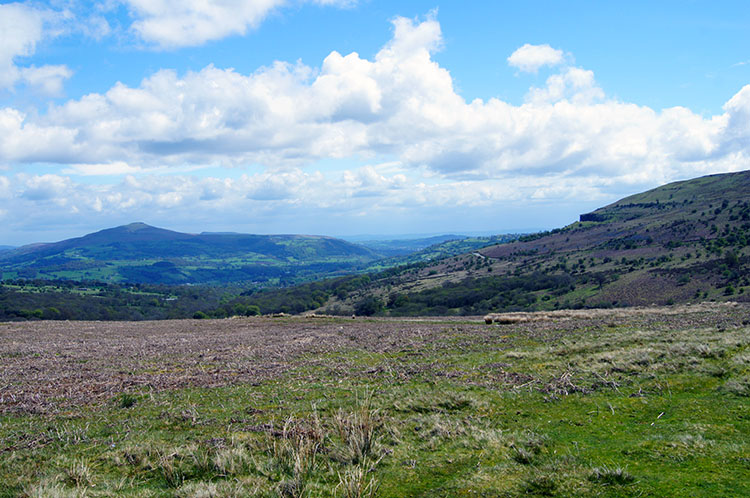 We had steadily climbed 200 metres while crossing the fields from the canal to Pencroeslan-isaf without really noticing. Probably the consequence of having walked 20 miles yesterday in the relentless rain. How lucky we were to have such a contrast today, it was sunny and it was warm. No avoiding the heights today - yesterday I had planned to cross the Brecon Beacons from Crai Reservoir to Talybont Reservoir by Pen Y Fan and Fan Y Big but the rain and low cloud kept us off the high ground. Having failed in our plans to get height yesterday Steve and I were keen to get to higher ground today so pressed on along a track past Pencroeslan-uchaf and then by a right fork in choosing between two indistinct little used paths to Bryn yr haul from where we could clearly see the high ground at Craig y Castell. It did not take us long to reach and cross the road which ran from Llangattock to Blaen-Onneu. Being so excited at reaching open ground and seeing spectacular views unfold such as the one east to Sugar Loaf and the cliffs of Craig y Cilau we continued straight over road and climbed further to the top level of Twr Pen-cyrn, host mountain of Craig y Castell and Craig y Cilau. That was not the original plan. 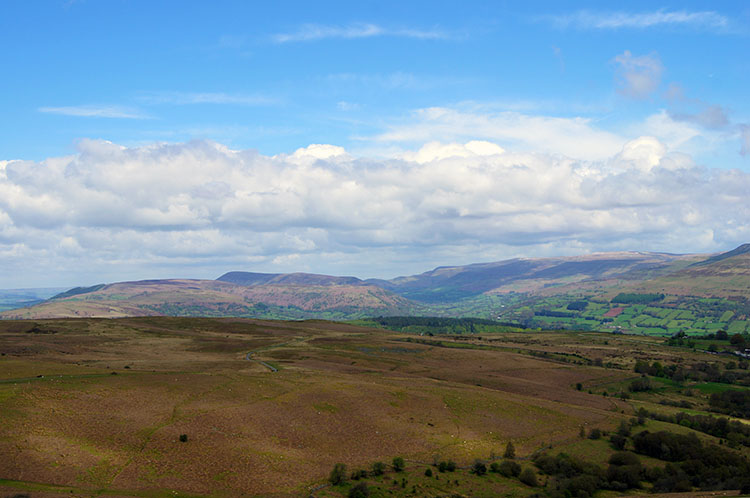 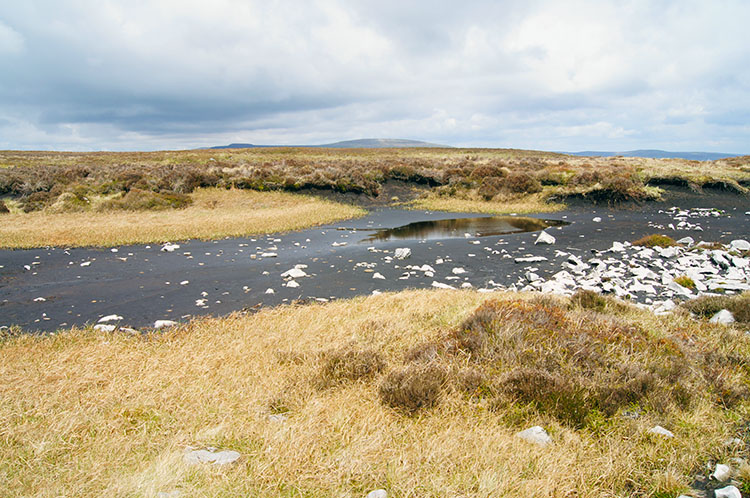 Having reached the top plateau of Twr Pen-cyrn, alternatively known as Mynydd Llangatwg and locally known as Llangattock Mountain we ambled across the top for a while and came to a cairn where a trainee soldier was trying to work out his bearings. Steve tried to make conversation but he was quiet. Steve told me "They are not encouraged to talk to the public or ask for bearings" which part explained the soldiers quietness. From the cairn we kept close to the north edge of the wide and expansive plateau on top of the mountain. We had to as Mynydd Llangatwg is a sponge and to venture into the middle leads to inevitable bog trodding. We found that out in our attempts to explore the interior. 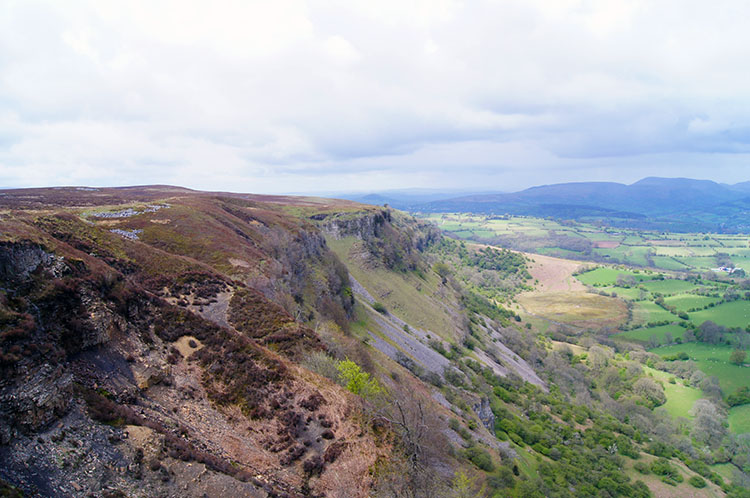 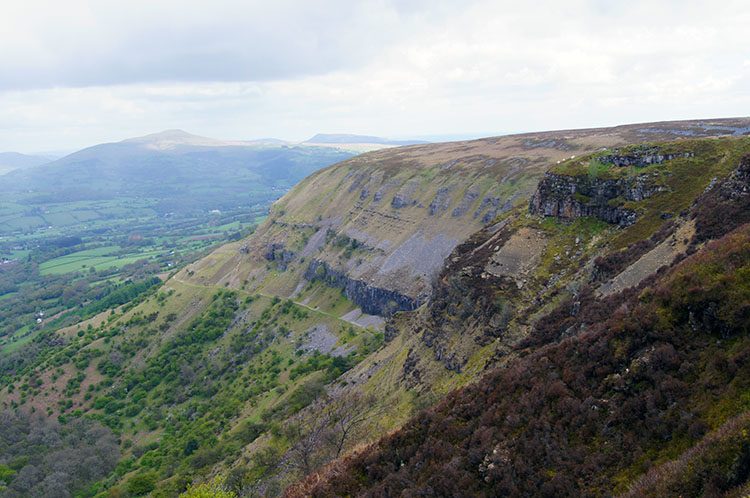 Being forced from the interior of Llangattock Mountain led to us developing a course on the south side of the cliffs which we had reached. We did not see it coming really, one minute on a spongy flat topped mountain and the next close to sheer cliffs. The hill forms an impressive northern scarp overlooking the Usk valley and commonly referred to as the Llangattock Escarpment. We were stood right above it and we felt majestic. Once we got to the centre of the cliff horseshoe at Eglwys Faen I looked left and right to the impressive lines of the cliffs seen in the photographs above, both taken at the same spot. 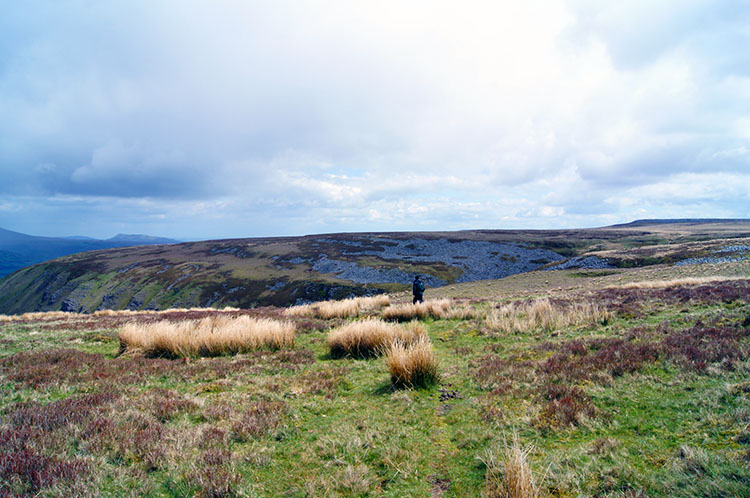 Negotiating a way above the cliffs 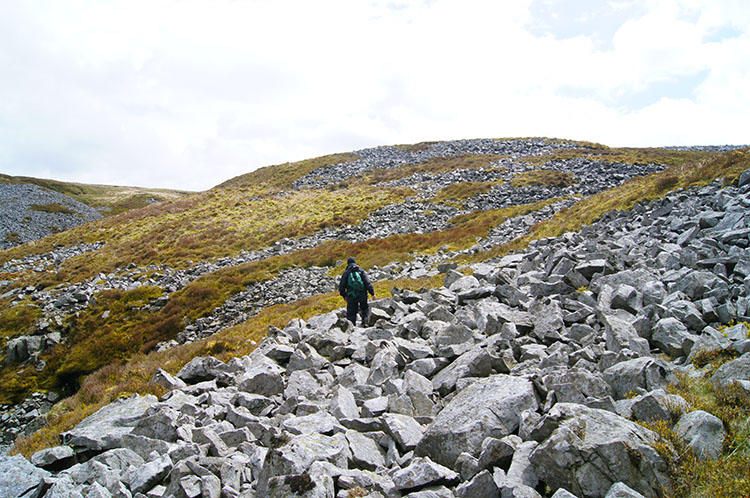 While thoroughly enjoying being above the cliffs, a pleasure made more so by walkers on the paths below looking up to our vantage point, we did have the navigational task of finding the way down. The map did not show an unbroken one until we had reached the eastern extremity of the cliffs at Darren Cilau but we did consider one fashioned down the centre of Eglwys Faen, a path some youngsters were walking up. However we decided to continue following the top to the marked one at Darren Cilau. While we walked we sometimes had to step carefully across a number of boulder fields, most in eerie parallel lines to each other, as if arranged by man rather than natural. And naturally formed they clearly were. 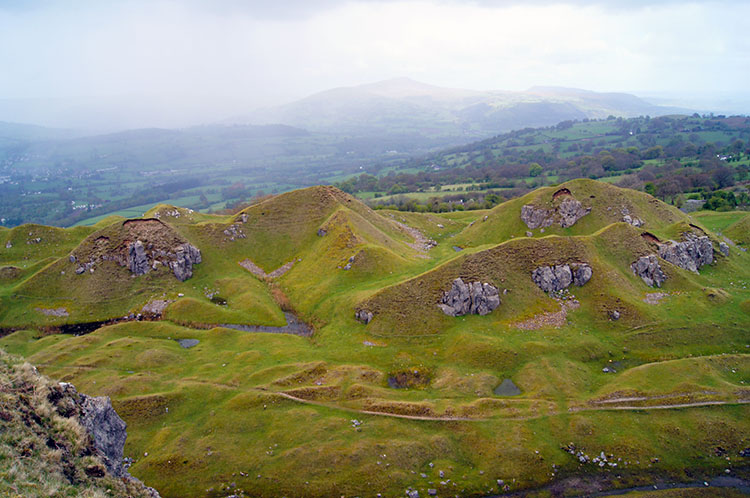 The humped hills at Darren Cilau 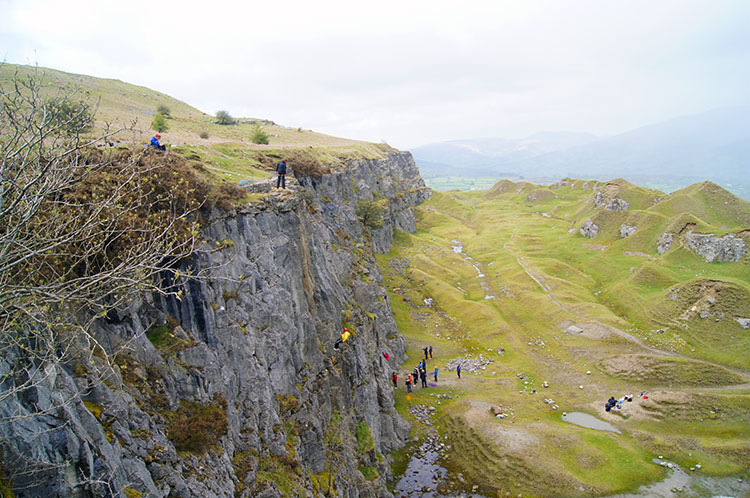 After a little awkward walking crossing the boulder fields and some GPS aided reassurance we found the path leading off the mountain. At the path we could have walked south back to the mountain top and in a little while picked up the trig point marking the summit but that was not our intention - should it be yours do so before following us down the path. Before we descended both Steve and I were gob-smacked by the out of character small rounded and humped hills at Darren Cilau. Surely they were created by the quarry works? As we walked down towards the site of the disused quarry our attention was captured by the noise and activity of youngsters rock climbing on the face of the north facing quarried cliff. 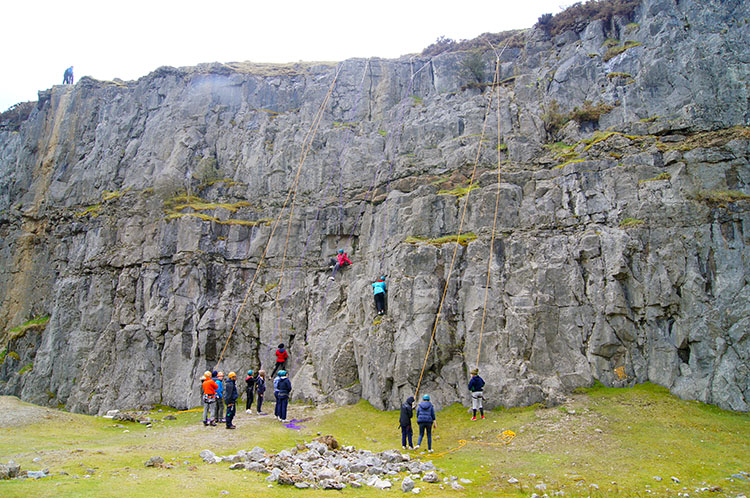 We watched the youngsters learning their new skills

We headed away from the path to take a break watching the youngsters apply their fledgling skills to the task in hand. Some were enthusiastically climbing the cliff, some more were watching attentively while others were playing in the quarry, some hiding around corners and some more just relaxing as Steve and I were. we stayed for about 15 minutes watching the work, fun and play. It was all very enjoyable. And our short exploration of the quarry was enjoyable too; definitely a place to explore. One of the old cart tracks leading to the quarry made for a perfectly framed profile picture to Sugar Loaf, straight as a Ley Line 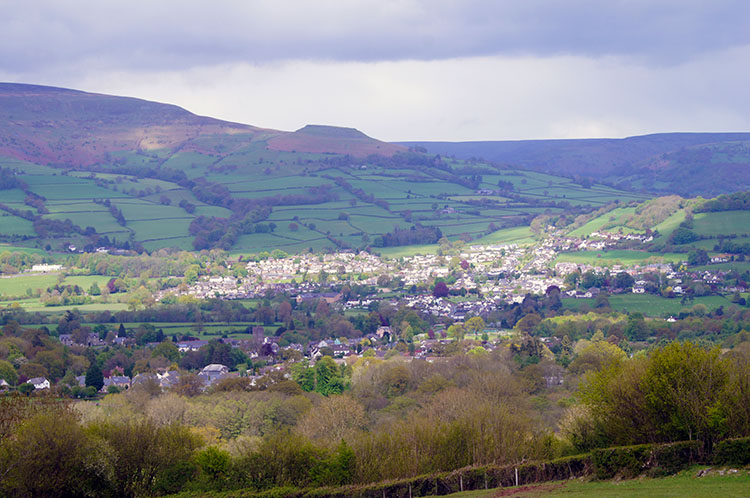 Looking down to Crickhowell from Darren Cilau 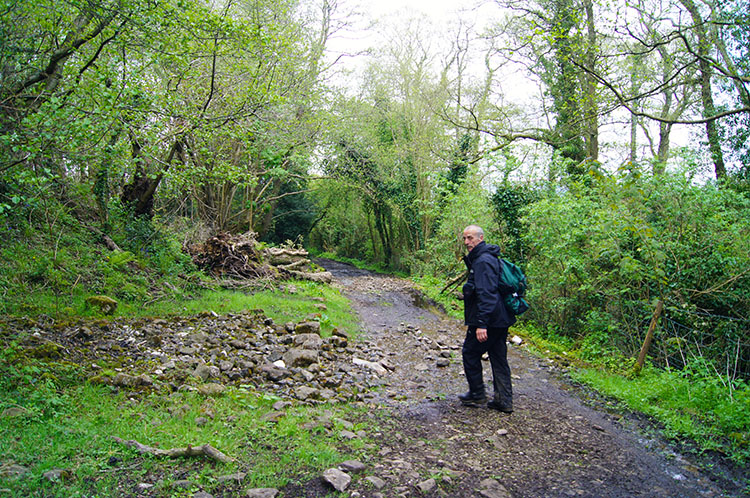 Following tracks back to Llangattock

After Darren Cilau Steve and I followed a course on tracks, a short stretch of road, a courser shortening bisection of the zig-zag road and then by track past a dwelling to Tir-Philip-Evan. From there we walked on pleasant secluded tracks past Llwmys Farm and then through the perfectly maintained gardens of Tyle before crossing the road south of Darren to cross a wide field with a brilliant single Oak Tree before crossing a small stream. Then we turned from north to east and walked back on track and then along road into Llangattock. 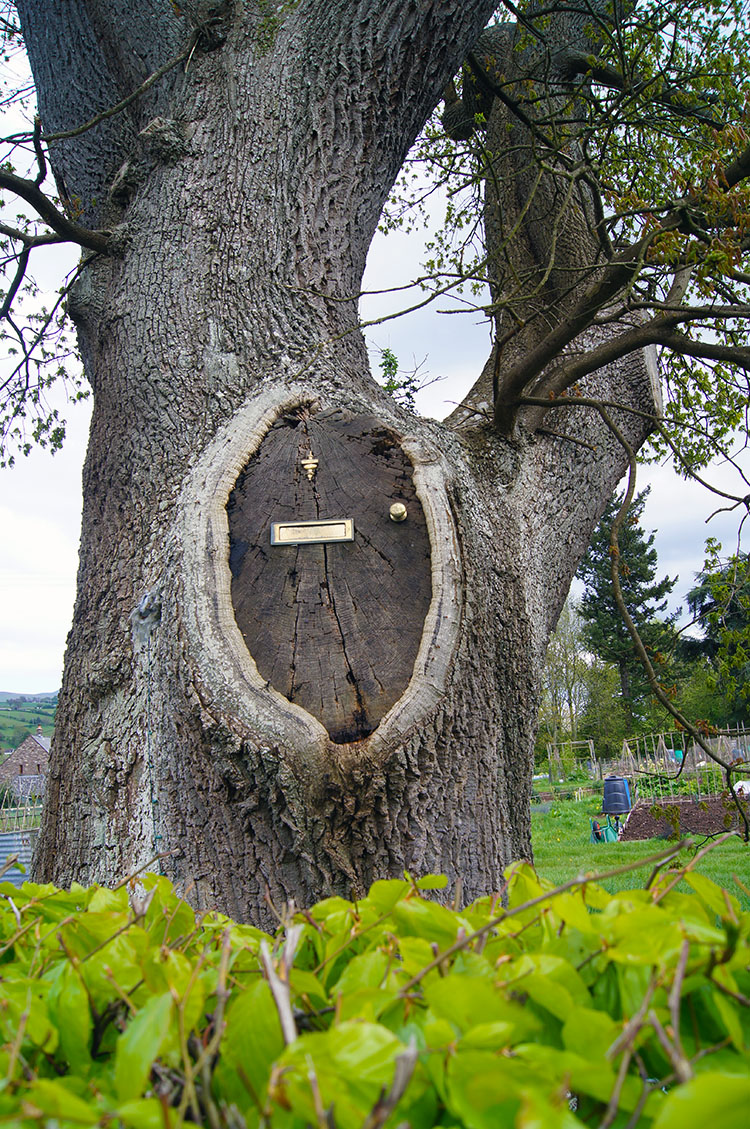 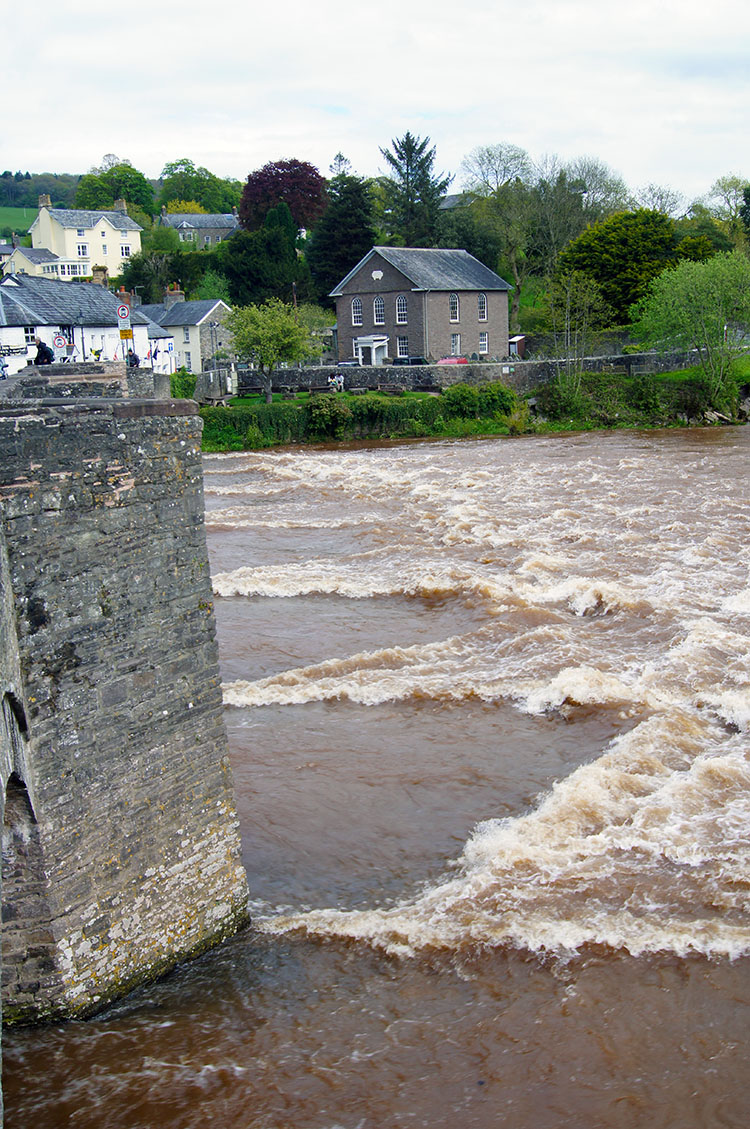 After rain the Usk surges under Crickhowell Bridge

From Llangattock we simply followed the roadside path back to Crickhowell Bridge. Before we got there my attention was diverted to another splendid Oak Tree, this one having the embellishment of an imitation door being placed in the place where a great branch used to be - I guess it had impeded the road in the past and taken down for safety reasons. Then after the Oak Tree we came to Crickhowell Bridge. The River Usk was roaring through, rusty red as peat. I did mention it rained all day yesterday did not I? This was the result. After watching the river flow for a while I continued up the lane into Crickhowell and to the finish. Not quite the finish of my Wales Coast to Coast, I still had three stages to go. For today though, an end to another wonderful day walking in Wales.

Postscript: As mentioned at the beginning of this report the course I took from Pencroeslan-isaf to Craig y Cilau was not the one I originally planned but enthusiasm to reach the top plateau of Twr Pen-cyrn took us above rather than below the cliffs of Craig y Cilau. I am so glad we got it wrong, I would take this course again. I am sure the alternative path below the cliffs is good too to get a close up of their profile but for me this is the preferred walk of Twr Pen-cyrn and Craig y Cilau.