Summary: A short walk perfect for a late Spring or Summer evening or if you have a couple of hours to spare over the weekend. While the walk is not particularly long in length it is a walk of exquisite beauty, especially in Springtime when I did the walk in the middle of a Bluebell wonderland or in Autumn when the leaves of the trees are in mature bronzes and browns before shedding them for winter.

The Walk: I came across Machen and Rhymney Valley during a walk through Wales in May 2013. I had fallen in love with the Welsh countryside since leaving Conwy almost three weeks earlier and having enjoyed the rugged mountains of Snowdonia, the wilderness of the Rhinogs and the Cambrian Mountains, enchanted Devil's Bridge, the lush Brecon Beacons and then the hills and valleys around Abergavenny and Pontypool I was on the home run to Cardiff Bay. I had crossed Mynydd Machen from Risca to reach Machen and on the way walked through the only eyesore of my entire Wales North to South Coast walk, when passing close to a farm. The farm grounds and surrounding fields were strewn with derelict rusting vehicles on the south slope of Mynydd Machen. They were dumped randomly on the land, a sad sight in such beautiful surroundings. 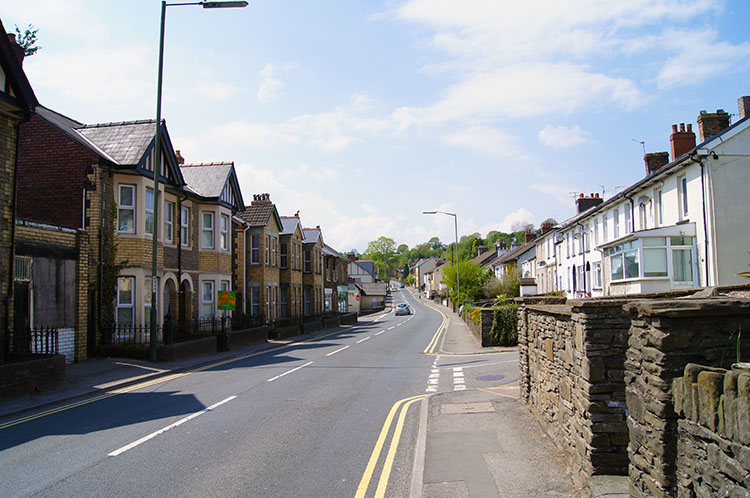 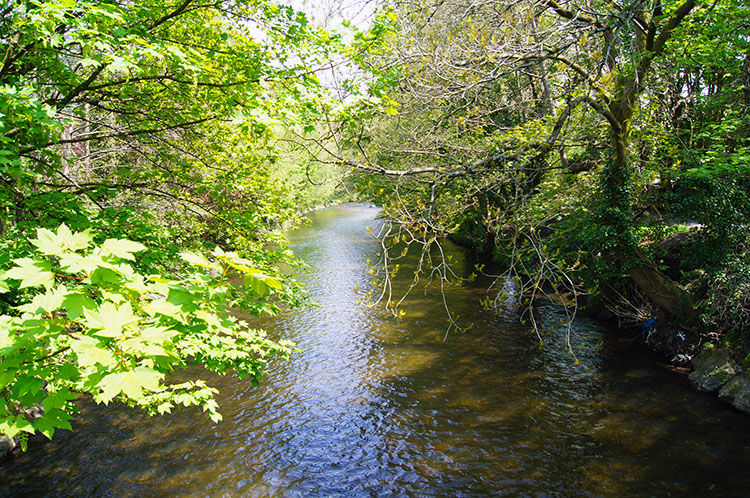 Rhymney River seen from the bridge in Machen

I put the thought of the scattering of rusting vehicles out of my mind when I came down into Machen, crossing the very quiet A6068 and following a quiet road past a club to a road bridge crossing Rhymney River. At the bridge I stopped to gaze. I thought of 'Watching The River Flow' a song by Bob Dylan I had listened to in my youth in the early 1970's. I took in the words and for a few minutes I watched River Rhymney flow. The sun sparkled on the water, the flashes of brilliant light moving about in the ever changing scene which was caused by the gentle shifting of the riverbank trees. It had me hooked for a while, just like a fish in the water until I broke the spell and walked on along the riverside track for a few steps until I followed the Rhymney Valley Ridgeway Footpath past a bungalow and then out of the light and into the dark. 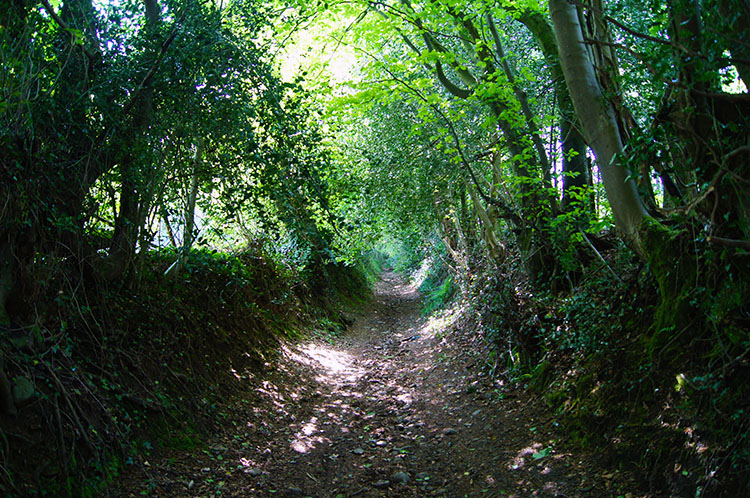 Climbing through the Holloway into the woods 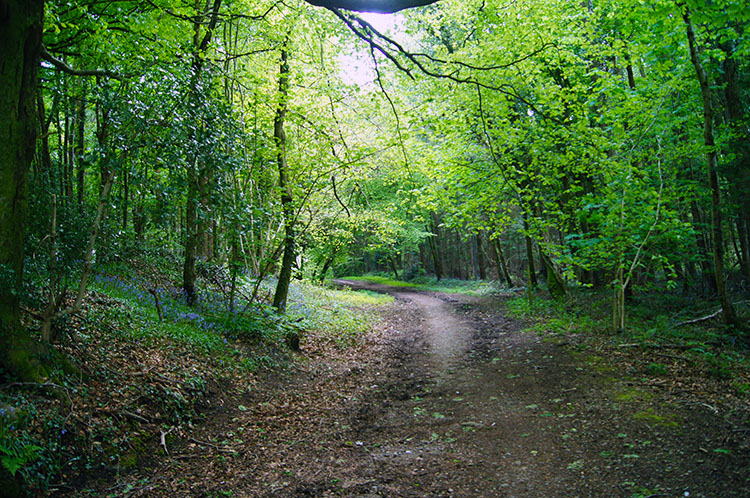 The dark was caused by the path taking me up from the bottom of Rhymney Valley and into woodland, the beginning of the change being provided by a Holloway, one of my favourite features of the British countryside. I imagined the stomping of hundreds of feet for many years and the dragging, hauling and pulling of carts over many years which had shaped the Holloway, cutting out a groove in the path. Once the path would have been about four feet higher but the years of wear and tear caused by walking, coupled with erosion and water run off had shaped the cut I now walked through. I revelled in the climb up the Holloway which reduced in depth as I gained height to eventually give way to level firmer tracks higher in the woodland. 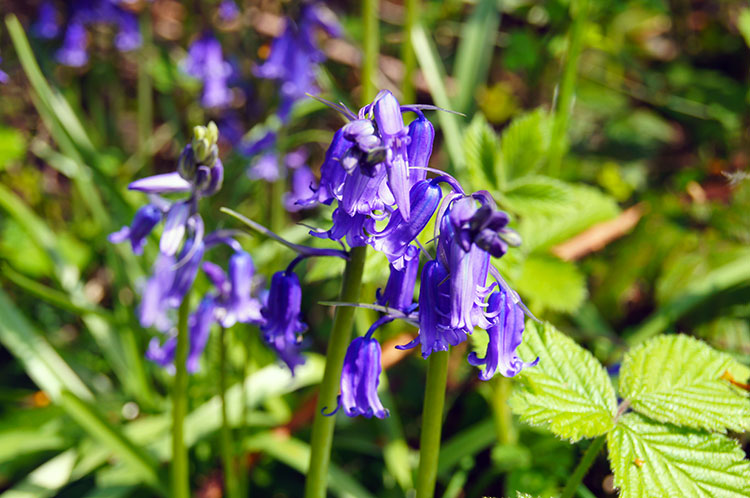 First sight of Bluebells beside the track 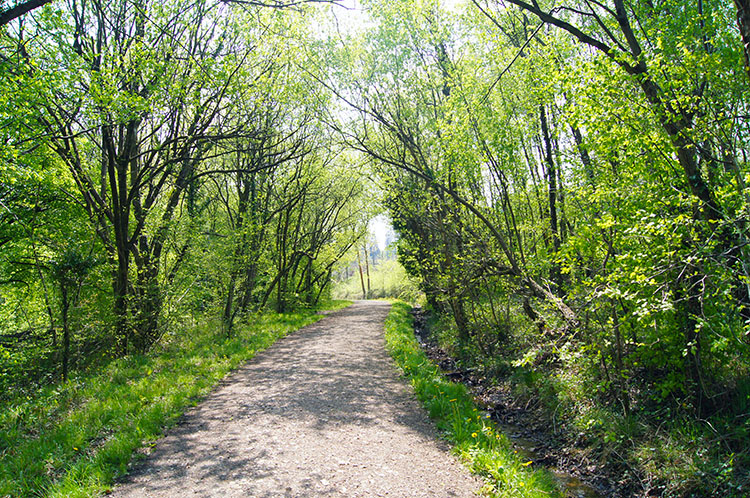 I was now getting deep into Coed-cefn-pwll-du, a fine example of native British woodland. It was not long before I saw what I was looking for - Bluebells. The first ones I saw were randomly scattered by the side of the tracks on the north slopes of the woodland. As I continued towards the crest of the bowl shaped hill on which Coed-cefn-pwll-du sat I lost sight of them, instead enjoying a walk on a track lined with young lightly green leafed Birch. As the trees at the riverside had done the young Birch swayed gently in the light breeze causing shadows to shift on the footpath in front of me as I walked on. A few birds close by but staying out of sight gave away their location by beautiful bird song. It was a lovely sound track. 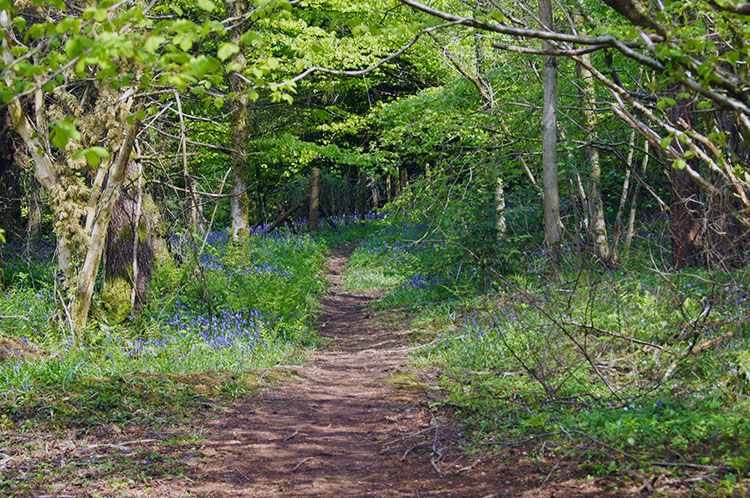 Side paths are everywhere in the woodland 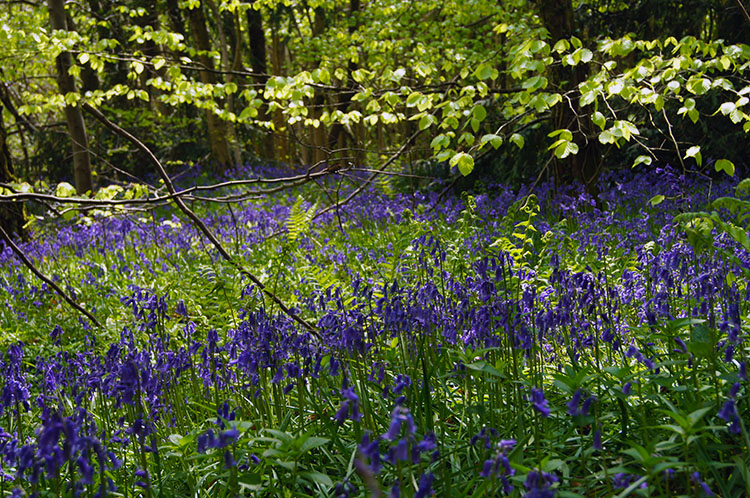 The tracks are worth exploring for views such as this

I continued walking into the woodland, now without much thinking and with little effort for all the height of the ascent into the woodland from Machen had been gained. I stepped off the main and wide tracks sometimes to follow narrow compacted soil tracks between narrow avenues of trees and here I was rewarded by the most intensely packed flourishes of mature Bluebell. The whole woodland floor seemed to be covered in the superb and most treasured native woodland flower. I was awestruck, I was in yet another of the WOW moments I walk for. This sight had made my day and I stood for ages, looked around at the joyful carpet of blue and framed the scene in my thoughts. It was brilliant, Coed-cefn-pwll-du is just one of the best places I have ever been to for Bluebell delight. If you live in South wales, particularly in the Newport or Cardiff areas you must come here when the Bluebells are flourishing. It will raise your spirits and cheer your heart. 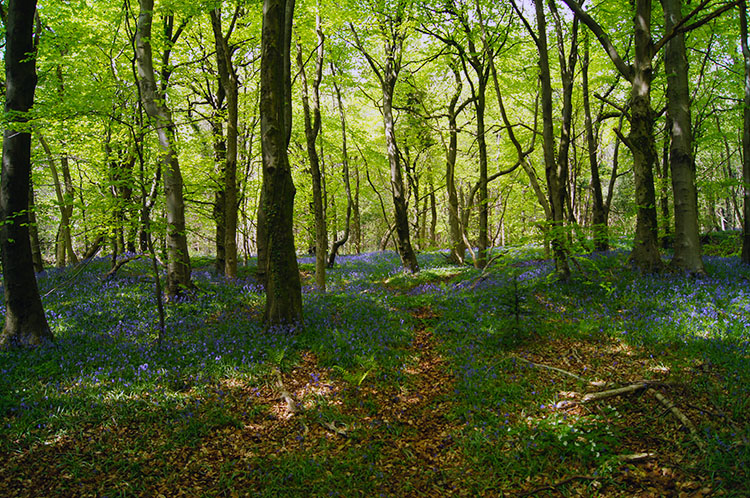 The beauty of Coed-cefn-pwll-du continues to delight 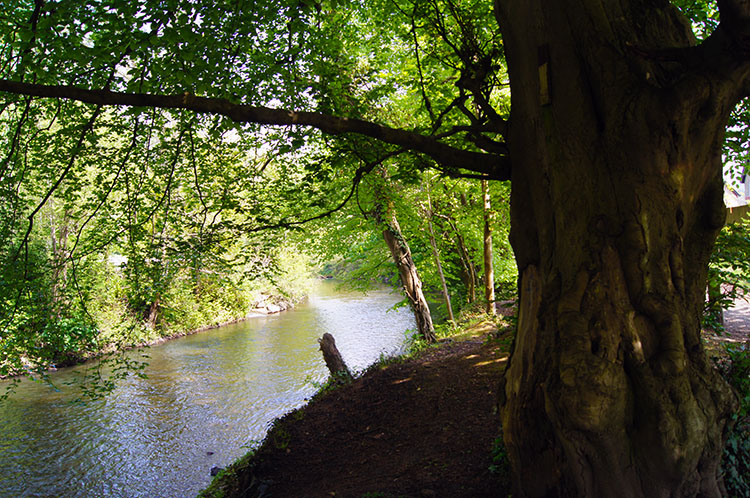 Following Afon Rhymney back to Machen

I continued to enjoy Coed-cefn-pwll-du as I walked through towards Rudry. Yet more banks of Bluebells amazed me. As I walked though the south side of the wood I met people entering from that direction - others appreciating the beauty as much as I was. The walk back to Machen: I continued out of the wood and on my walk towards Cardiff with a beaming smile on my face, the effect of what a marvellous sight of Bluebells does to me. As I continue south west you must return to Machen. Follow my recommendation.

The walk back to Machen: Leave the wood from somewhere on the domed crest of the hill by following the most suitable track eastwards to the road linking Machen with Draethen. Follow the road to Rhyd-y-Gwern Farm and leave the road at the farm to follow the path across fields back into Machen. After the fields skirt a housing estate and then follow the River Rhymney back to the bridge where this walk started (Note: The downloadable route maps show the route in various formats)