Summary: This is a short energetic walk which starts from the designated parking area beside the A4521 a couple of miles north east of Abergavenny. From the car park walk along a track into woodland which you climb through to the mountain top. When you are there stop for a while because if visibility is good there are tremendous views of the near countryside to be enjoyed, including a great view down to Abergavenny. After dwelling on the views follow the track down round north of the mountain back into the woodland and follow the track back home.

The Walk: Dave, Steve and I headed into South Wales in anticipation of great walks. I had recently walked in the stunning scenery of the area during a walk from the north coast to the south coast of Wales and Steve had joined me for three days during the Brecon Beacons stage of the walk. For Dave though it was a whole new experience so what to choose for his first walk? It would have to be a short one as we had to travel from Steve's home in Rugby and book into our accommodation in Brecon after the walk so what would be a great short walk to begin Dave's walking experience in South Wales. There was only one obvious choice. 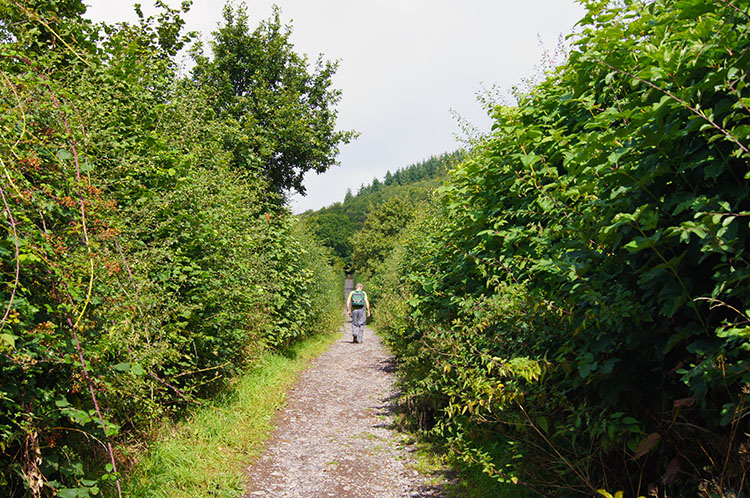 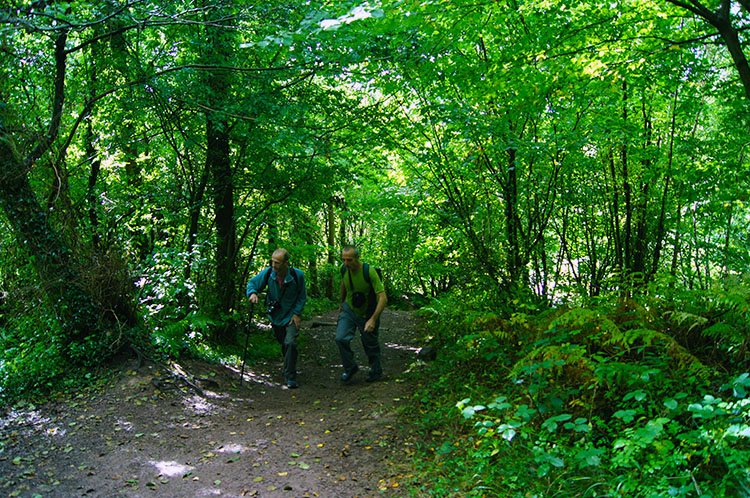 Climbing through the Skirrid woodland

The Skirrid is a very famous small mountain in the Abergavenny area on the south east edge of the Brecon Beacons. The mountains local name is Ysgyryd Fawr but it has such notoriety that it is also known as the Holy Mountain or Sacred Hill. The Skirrid has a distinct shape with the north west side of the mountain severed off in a catastrophic collapse, a result from ice age landslips. To begin our walk of the mountain we parked up in the generous car park beside the B4521 and followed the track through a gate with a National Trust sign confirming the way. The track began with a few short yards following a line parallel to the road before veering off on a dogleg right and up a tree lined avenue towards the mountain. Huff, puff, we were on the way up. After 240 metres we came to a gate and continued our climb up the south facing slope of the mountain. Now we were heating up, it was a warm day and we were in woodland which sheltered what little breeze there was. And the path, despite being through woodland was often sun kissed. With it being our first ascent for a while we felt it. 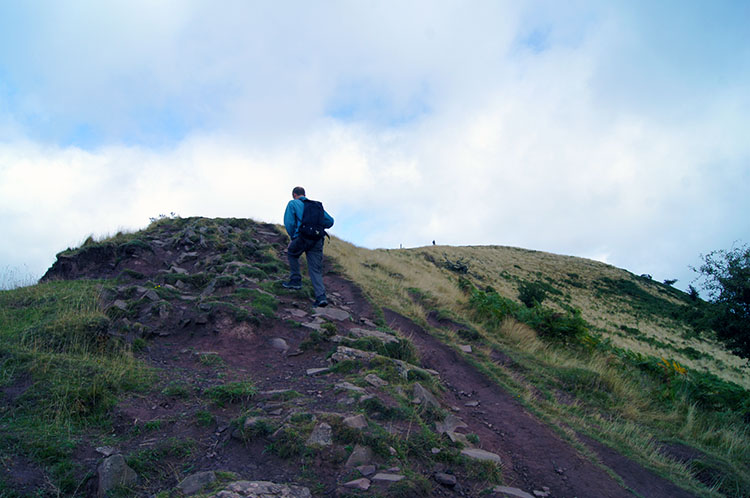 Into the open and climbing to the summit ridge 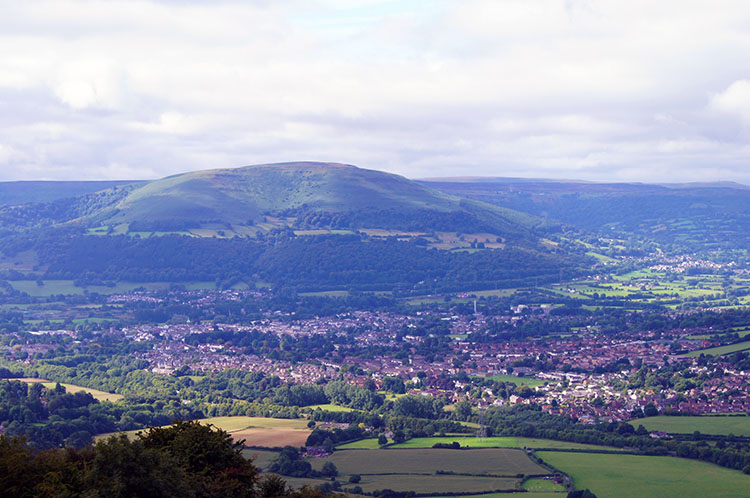 The view south-west to Abergavenny and Blorenge

The woodland ascent took us up 100 metres in 500 metres of distance, in simple terms a 20% ascent. Abruptly the woodland then gave way to open mountain and after making a short climb to a minor peak of 364 metres on the south end of the mountain we began the long steady climb along the wonderful ridge to the true summit at the north end. This was a time for enjoyment, for pausing and take in the revealing views. Of particular pleasure to me was the look back south west across Abergavenny and to Blorenge mountain immediately behind the town. It was on the very hard steep ascent of Blorenge during my Wales walk that I first saw the magnificent Skirrid and its lovely setting surrounded by immediately lowlands. I vowed then I would climb the Skirrid as soon as I could and look back (it was May when I climbed Blorenge, I had waited just four months). 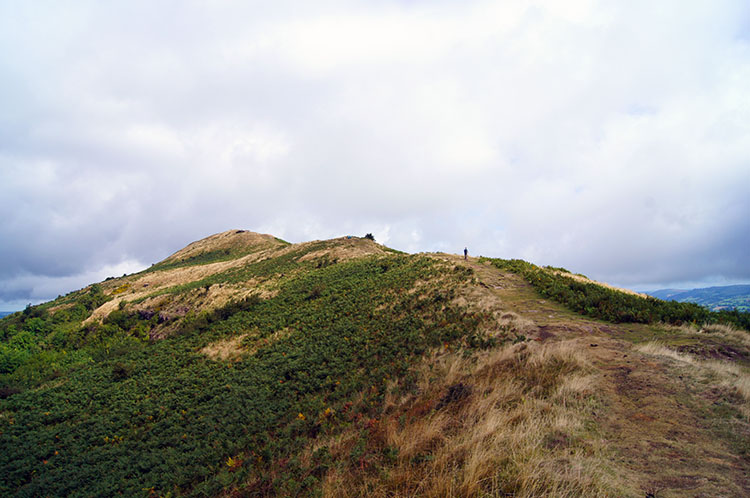 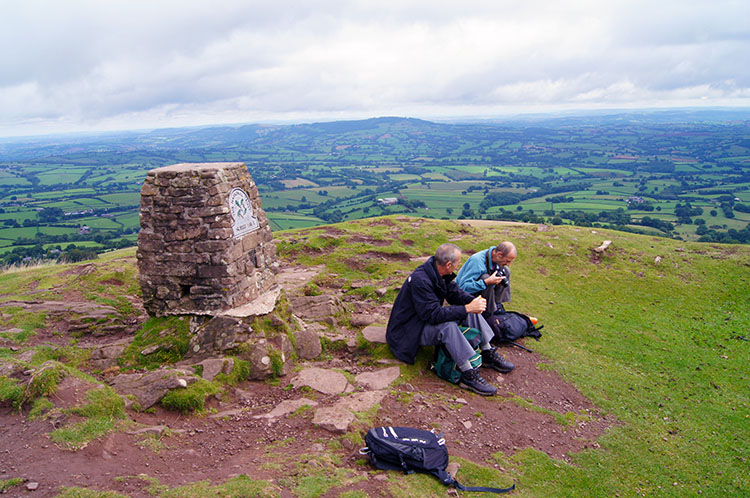 Enjoying a break on the summit of Ysgyryd Fawr

Continuing to pause and look in all directions as I made my way along the ridge I noticed Steve forging on to reach the top and Dave following on between the two of us in a more sedate manner. I was the slowest of all, taking in as much as I could as I ambled. There were a few other walkers on the mountain and I spoke with them as we met, all of us agreeing it was a pleasure to be up on the mountain on such a decent late summers day - the weather had been forecast as mainly cloudy with possible showers so we were indeed lucky. It was not raining and did not throughout the walk. Even better the sun peeked out from behind the clouds regularly as we continued the walk. Eventually I reached the summit and joined my walking pals.

View from the Skirrid to Abergavenny, Blorenge and Sugar Loaf

We took our break at the summit and while doing so we engaged in conversation with a couple from Essex who were on their last day of five walking in the area. Conversations are generally good with people on the mountains, it often brings the best out in people and this chance meeting was no exception. We were all in accord that it was a great day to be out and while we chatted we kept on looking at those exhilarating views. Steve asked what route I had taken on the Wales walk after he left me in Crickhowell. I could point out the way I climbed Sugar Loaf and then the path I followed from Sugar Loaf into Abergavenny. I then pointed out my way through Abergavenny and Llanfoist before making the steep climb up Blorenge. 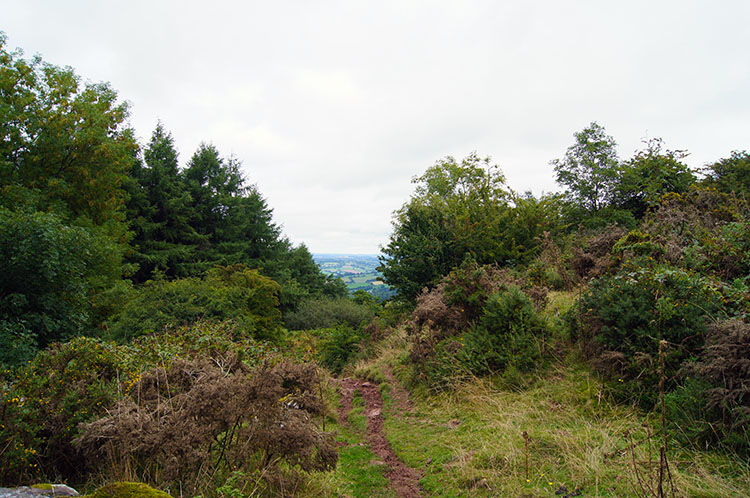 The track along the west side of the mountain 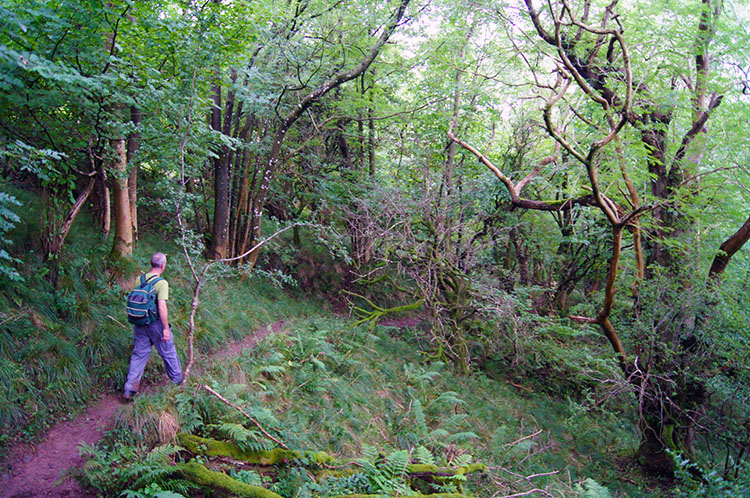 Heading back through the Skirrid's lush green woodland

After bidding the couple farewell we made our way off the Skirrid by making a steep precipitous descent off the north face of the mountain to reach the track following around the west side. (Note - that is not the route shown on the map or that in the track files. These follow the true path). Once safely down our uniquely fashioned zigzag route we followed the path south first across open ground and then though more lush woodland. On this section of walking we came across sections of thick fern which covered the path almost completely in parts. It was never particularly difficult, just awkward. A result of less footfall than that on the ridge line above us. 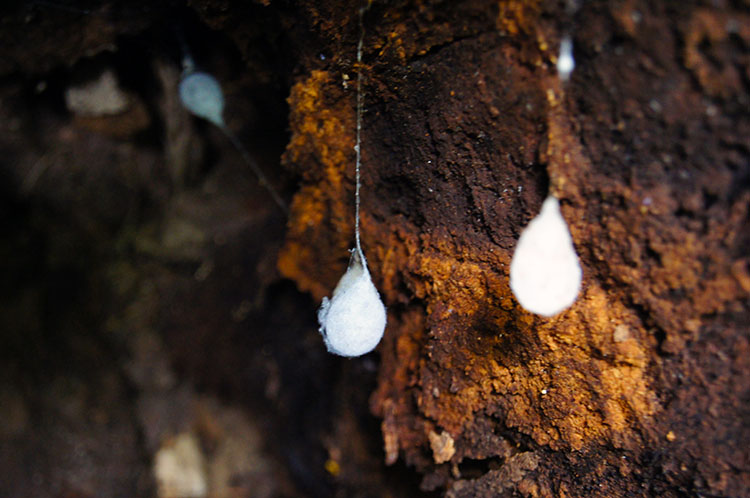 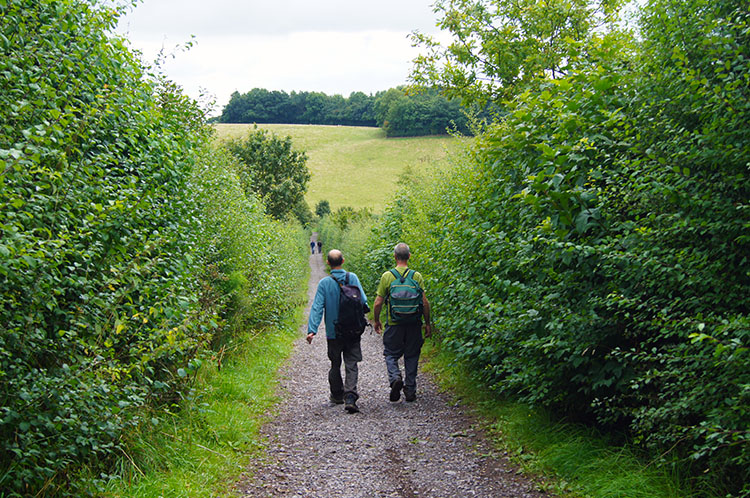 Heading back all contented

After making our way on the path and through the fern we came to the point where the paths meet, the one we took up the Skirrid and the one we had just returned along. Or at least I did first, now being in the vanguard. Dave and Steve beckoned me back a few yards to a hollow tree trunk. Inside we silk pouches hanging like teardrops. The work of Butterfly or Moth? After enjoying the viewing of remarkable natural engineering we continued back along the path to our start point. It had taken us two hours, never at any rush apart from Steve's short sprint to the top on the ridge. There is absolutely no reason to rush this walk, there is every reason to dwell and enjoy it. It was a great walk to start our walking holiday.