Summary: The Black Mountains are often neglected due to the popularity of the Brecon Beacons, their near neighbours. They should not be as they offer very similar walking conditions and provide views just as thrilling as those provided on the Beacons. This walk to the mountains which lie on the eastern edge of the Brecon Beacons National Park is a stunning introduction to the Black Mountains. Once the climb to height is done the walk is essentially a ridge walk with exciting views. Five peaks are visited: Pen Twyn Glas, Pen Allt-mawr, Pen Gloch-y-pibwr, Pen Cerrig-calch and Table Mountain. Views provided of more Black Mountains include the superb eastern ridge of the Black Mountains which is a distinct part of the Cambrian Way, the distinct rounded mountain of Mynydd Troed and also Mynydd Llangorse and Pen Tir. Then from Table Mountain there is a great view down to Crickhowell and across to the the cliffs of Craig y Cillau on Twr Pen-cyrn.

The Walk: When I planned the walks for my five day walking break in South Wales with Steve and Dave I made sure one of the choices would be in the Black Mountains. They are the easternmost of four ranges which comprise the Brecon Beacons National Park and suffer in popularity because of their close proximity to the main central Beacons range which includes Corn Du, Pen y Fan, Cribyn and Fan y Big. They were included in the walking break but would have to wait, for now my attention was fixed on Pen Twyn Glas, Pen Allt-mawr, Pen Gloch-y-pibwr, Pen Cerrig-calch and Table Mountain; five lovely peaks of the Black Mountains. 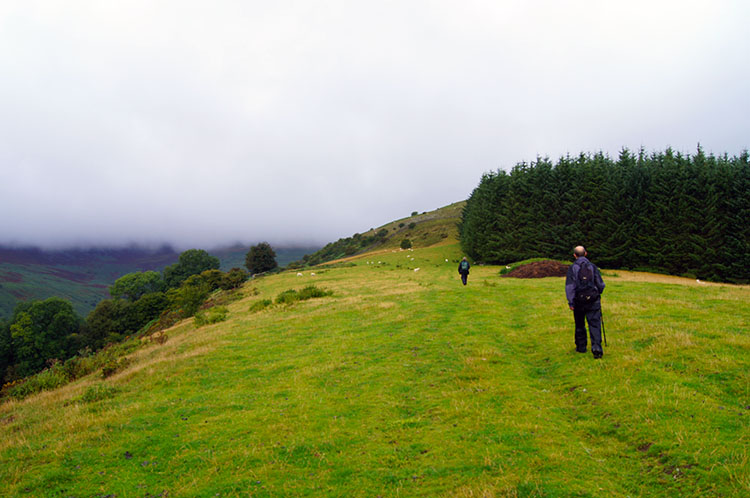 Climbing to the Black Mountains near Darren Fach 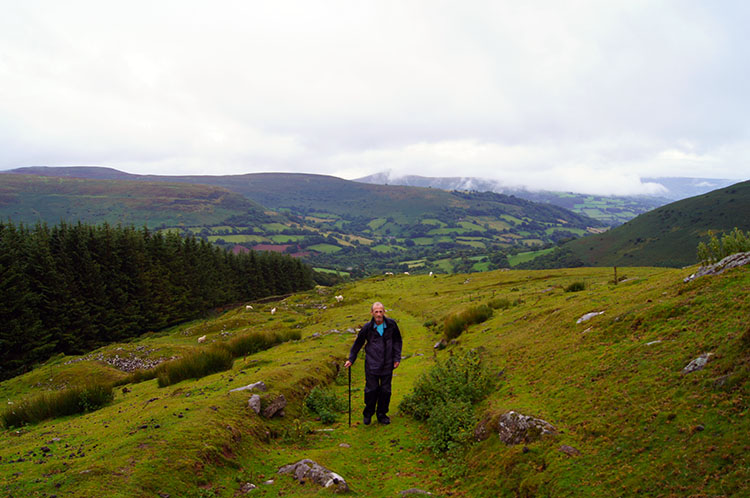 It was a grim start to the second of five walks on the South Wales walking holiday. The rain had held out and the sun showed during our first short walk of the Skirrid. We hoped for similar conditions once we got into this walk and onto the tops; the met office had promised us we would get a three to four hour weather window so we hoped for accuracy. After parking up in the lay-by at the side of the road near a bridge close to Neuadd-fawr we set off by following a sign pointing us up a field to where we met a track leading to the mountains. We climbed in slight drizzle to Park Wood and Darren Fach. As we did so I kept looking back towards the valley below and was heartened to see mist rising from the banks of trees beyond, a good sign of improving conditions. Still, that was some time away and we headed on upwards and into cloud. 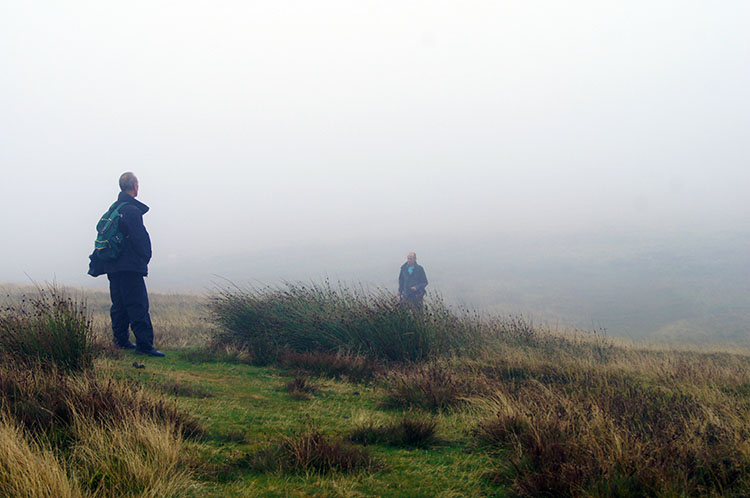 In cloud on the Black Mountains near Pen Twyn Glas 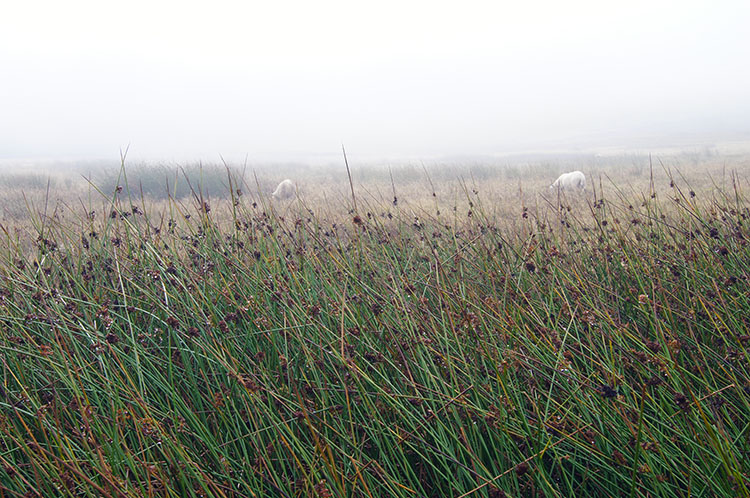 It was not long before we reached and entered the cloud. However there was compensation for the lost of distant views as we walked through a scattering of disused Quarries. Stone was piled up in and around many of the pits strewn either side of the track, plenty of material for repairing dry stone walls or even building new ones. Anyone want a new wall? After the Quarries we continued through the cloud towards Pen Twyn Glas which we reached and identified by the smallest of stone cairns marking the summit point. We were grateful for the identification as the top of Pen Twyn Glas as where we made a right angle turn to the left and headed across virtually level ground in a south west direction towards Pen Allt-mawr. 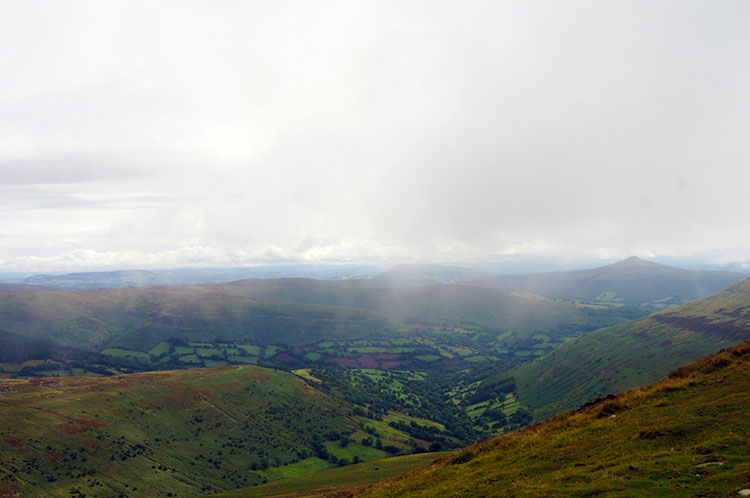 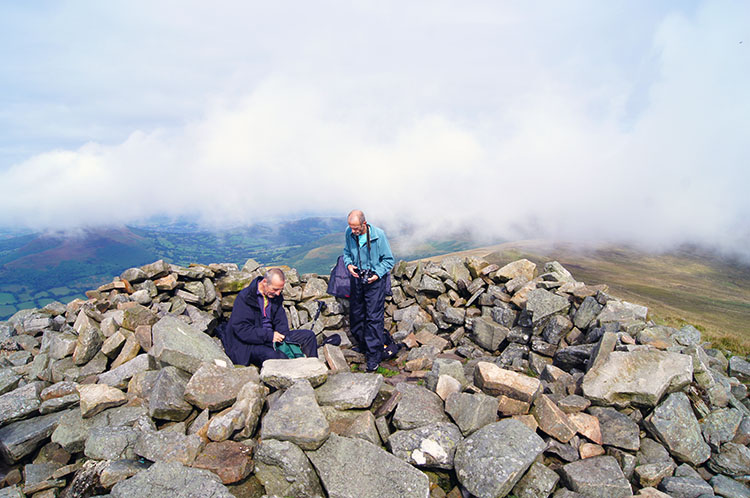 Taking a break in the shelter on Pen Allt-mawr

The going had been good, the path easily identifiable in the murky conditions and a good firm path it had been too. The terrain continued to be good as we headed towards Pen Allt-mawr and our spirits which had never been down were uplifted further as we noticed the sun begin to pierce the skies above us. While it did its work the clouds parted to provide us with our first views of the land below us to the north and to the west. These provided us with our first sights of Mynydd Troed and Pen Tir beyond the valley linking Crickhowell to Talgarth. Mynydd Troed was particularly attractive, a rounded hill with green fields and woodland surrounding its flanks and a brown moorland top. The cloud continued to melt away as we continued on to Pen Allt-mawr. When we arrived at the summit we made our way into the rounded stone shelter and took our first break. As we rested a couple approached from the direction of Pen Cerrig-calch. We chatted briefly before they moved on north. They were two of only three people we met on the entire walk and the other person appeared almost immediately after the couple had left. The single walker was a soldier in full combat gear but with a light backpack. I said "hello" and he replied with the same greeting before walking past the shelter, looking down to the north east and then sprinting off in that direction. 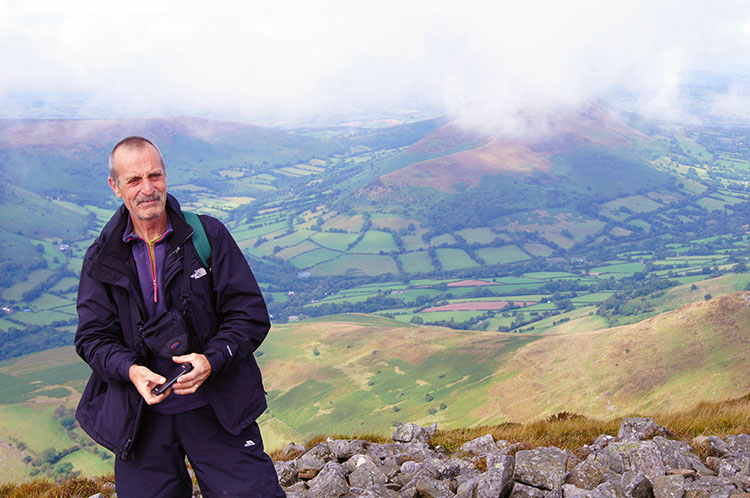 Steve takes in the beauty of the Black Mountains 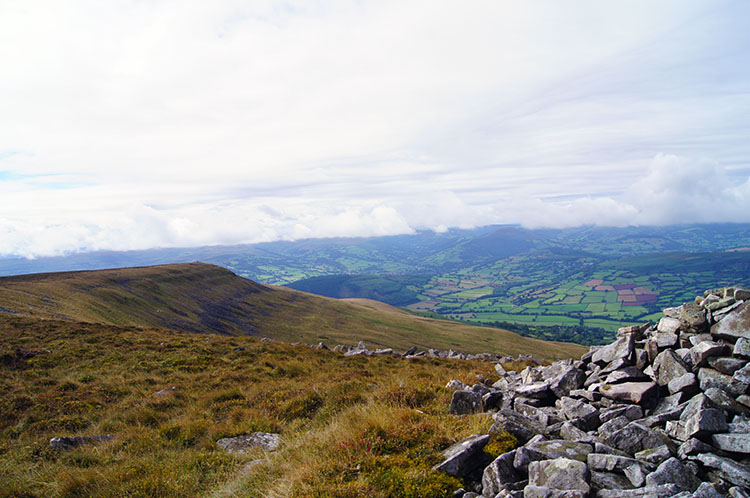 My original plan was to walk from Pen Allt-mawr along a track on the east edge of the mountain plateau to Pen Cerrig-calch but while enjoying our refreshments I could not help but notice the alternate ridge path on the west side leading to Pen Gloch-y-pibwr. The path looked lovely and one that would maintain the excellent views over to Mynydd Troed and Pen Tir. So without telling Dave and Steve who were none the wiser I struck off in the direction of Pen Gloch-y-pibwr and beckoned the boys to follow closely behind. The sun was breaking out with regularity by now and that warmed us as we walked on path along the west ridge in high spirits. At Pen Gloch-y-pibwr we came to a vast area of stones, some of them made into a cairn from what seemed to be the remains of an old collapsed building. However later research suggested the huge cairn was not an old building at all. Partially excavated in 1924 it revealed fragments of a megalithic handled beaker were found within a cist. I learn something new during walks and afterwards when researching quite often, always fascinating to me. Whatever the history, the cairn stands in an impressive spot with excellent views of the surrounding lowlands and mountains including the Brecon Beacons and including the Pen y Fan range ten miles due west. It is a perfect place to dwell and take in the views for a while. 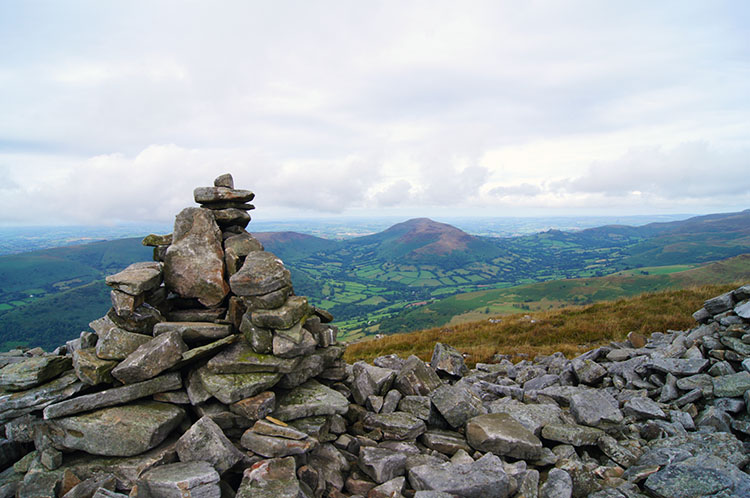 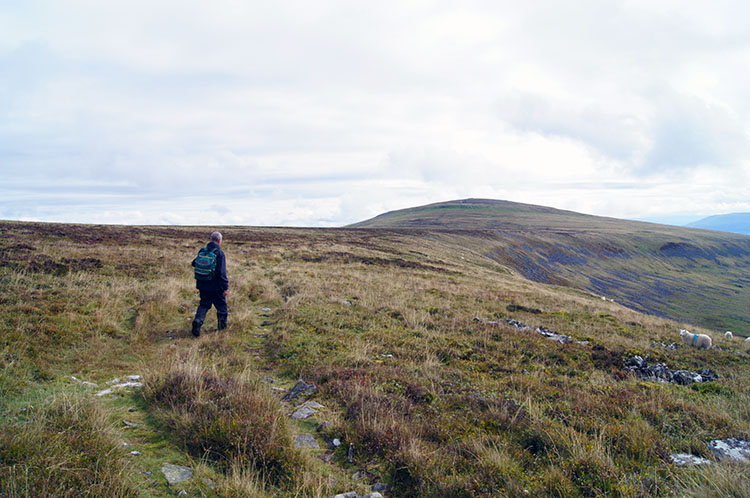 From the cairn on Pen Gloch-y-pibwr we turned from our previous course of south and south west to one of south east. Again the going was very good as apart from a few small puddles in hollows made by recent boots on the path it was dry going. I imagined drainage on the mountain range to be quite good as there had been some rain earlier in the day and on days leading up to the walk but little standing water was evident and our boots stayed relatively dry as we continued on over the mountain. As we walked away from Pen Gloch-y-pibwr I focused on the rounded top of Pen Cerrig-calch, our next destination. 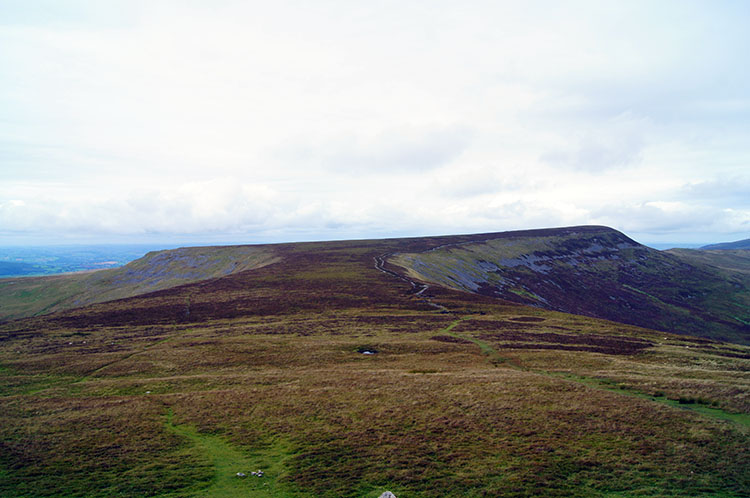 The romantic expanse of the Black Mountain uplands 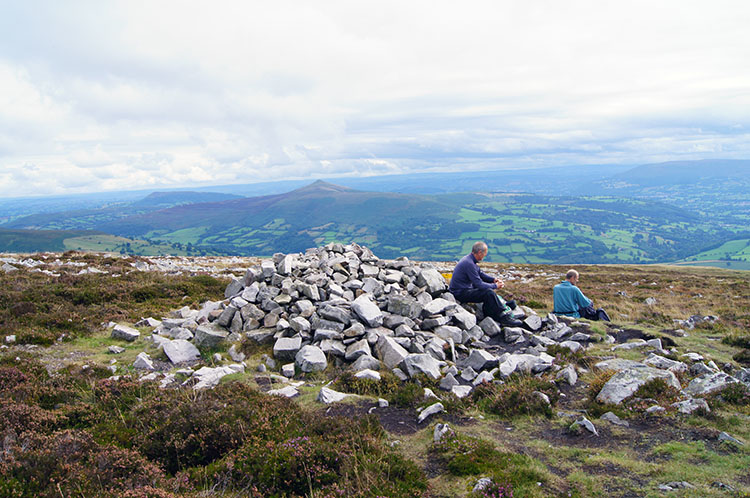 Despite being the Black Mountains and not the Brecon Beacons the mountain tops looked very similar; I expect they are of similar geological nature. The tops were virtually level plateaus as on the Brecon Beacons to the west and the slopes uniform just as those in the area of Pen y Fan. The only real difference was the colour of the ground, not the rich indicative green of the Brecon Beacons but ground of a brown hue. Should they not be the Brown Mountains? I will leave that question to the experts. Whatever the colour and the designation of black the walk continued for us across the level expanse of upland and then with a final short climb to Pen Cerrig-calch where we took our final break of the walk. At Pen Cerrig-calch I spotted Table Mountain below us to the south. Thus the next destination was plotted into the memory banks. 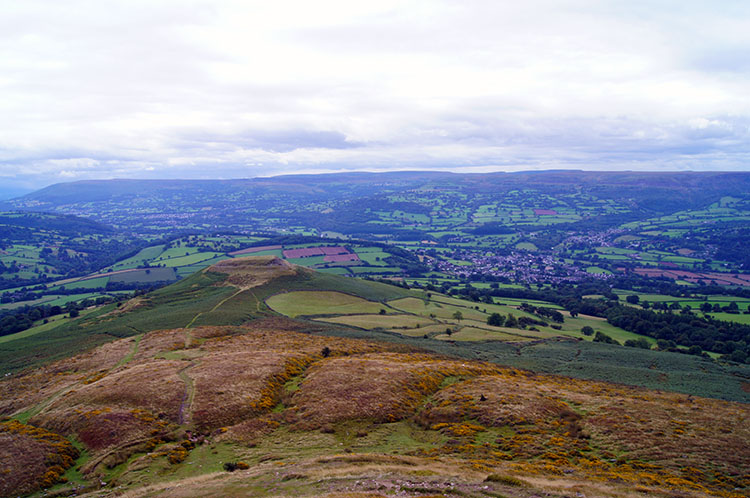 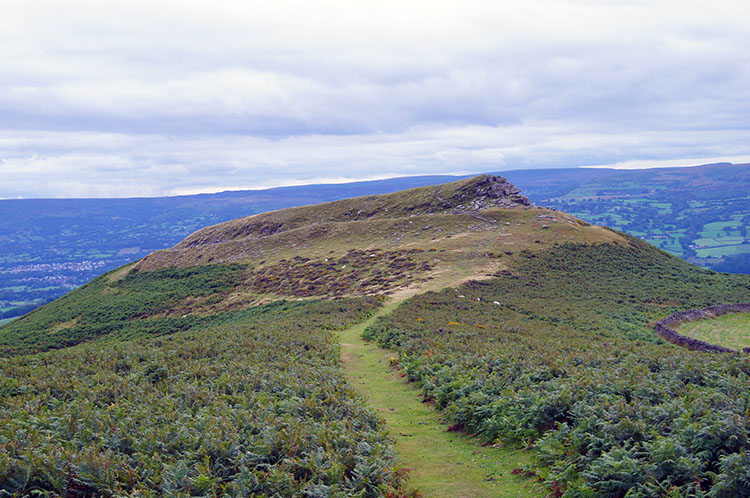 After completing our final refreshment break we walked off the high ground of Pen Cerrig-calch and headed south directly towards Table Mountain. I had first looked up at Table Mountain during a family trip to Crickhowell about two years earlier and when I looked up to it from the village I resolved to climb to it one day. I did not know then that I would actually be descending towards it before making a short ascent from the south side. Still, sometimes the easier option is a bonus and this time it certainly was as I could focus on the lovely view beyond Table Mountain to Sugar Loaf, Craig y Cillau, Twr Pen-cyrn as we meandered down the easy southern slopes of Pen Cerrig-calch. During the descent we halted to observe wild ponies on the mountain including two lovely white adults, one of them a mare with two brown foals. I presume they too will turn white as they mature. The distance between Pen Cerrig-calch and Table Mountain is two kilometers, all but 100 metres of it downhill. The final 100 metres involved a short haul up to the table top. 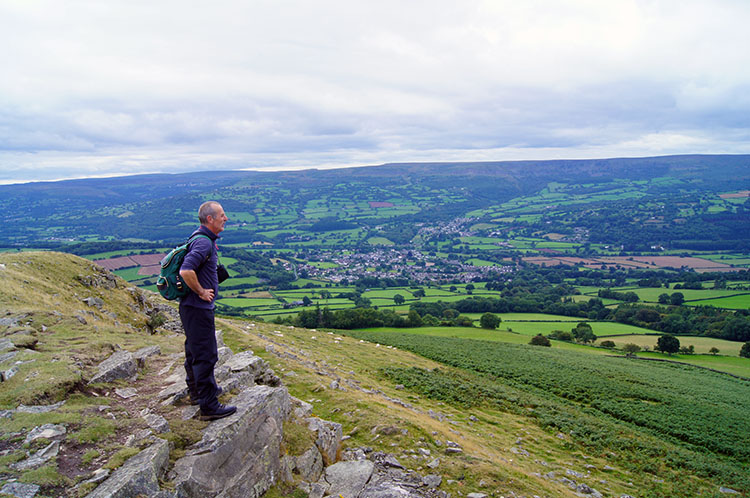 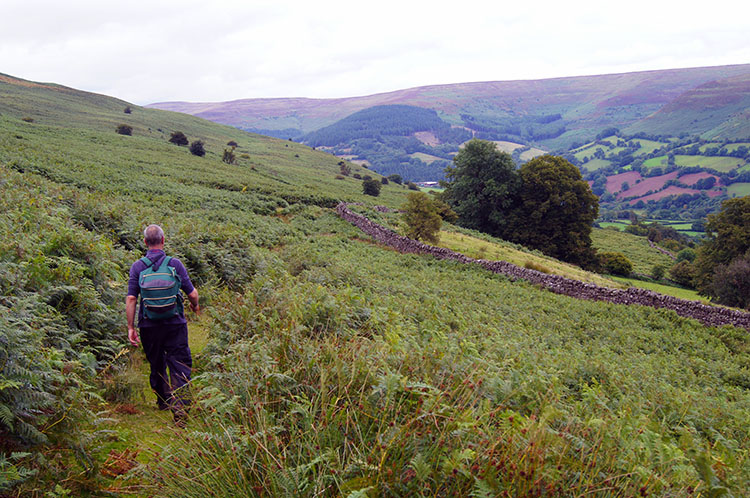 Following the track from Table Mountain to Neuadd-fawr

On Table Mountain once stood a hill fort called Crug Hywel. The summit of the hill is entirely taken up by the Iron Age hill fort, with a clearly visible earth and stone ditch and rampart though it is easier to make out from elevation than stood on it. Rather than search for the antiquarian evidence we chose to look out to the south and west. South and directly below was Crickhowell. West was our final view of the day to the Brecon Beacons which were were heading into the next day. For this day though we had a final task which involved following a path back to our start at Neuadd-fawr. This was done by tracking off Table Mountain due east towards Llanbedr and joining a path through fern covered ground just above a dry stone wall. Despite the prolific ferns it was easy going. We had been out on the Black Mountains for about three hours in the best of the days weather conditions. And just as well to because the met office had got the weather forecast spot on. As predicted the rain returned three and one half hours after it had stopped. It was raining quite persistently as we finished. Perfect timing for a brilliant first walk in the Black Mountains. Such was the thrill of the walk I resolved to return and explore more in the future.