Summary: Pen y Fan is by far the most popular mountain to climb in the Brecon Beacons, most people climbing it from the Storey Arms on the A470 south of Brecon. However this horseshoe walk from Taf Fechan to the four neighbouring peaks of Corn Du, Pen y Fan, Cribyn and Fan y Big is by far the most spectacular route to take and for me much more rewarding than a simple up and down along a crowded path which the one from the Storey Arms can be. It certainly was crowded on the day of my horseshoe walk which I did in the company of best friend Steve and brother Dave on a lovely late summers day. The walk provides splendid views throughout. Views to neighbouring valleys such as Nant Ddu and Nant Crew are also highlights of this highly recommended walk.

The Walk: After two abortive attempts to climb Pen y Fan it was a case of third time lucky. On the first two occasions I had been foiled by bad weather. On both occasions I could have climbed to Pen y Fan and the surrounding peaks but I so much wanted to do it when the weather was set fair to most appreciate not just the walk but the views that would be available from the top of the Brecon Beacons highest mountain. Follow me on this most spectacular of walks in the Brecon Beacons National Park, one I did in the great company of Steve and Dave on the middle day of a five day walking holiday in South Wales. 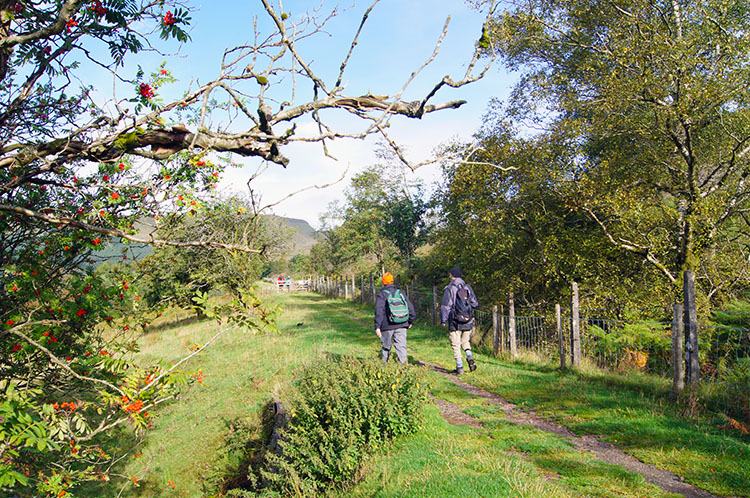 Following the Taff Trail towards the Neuadd Reservoirs 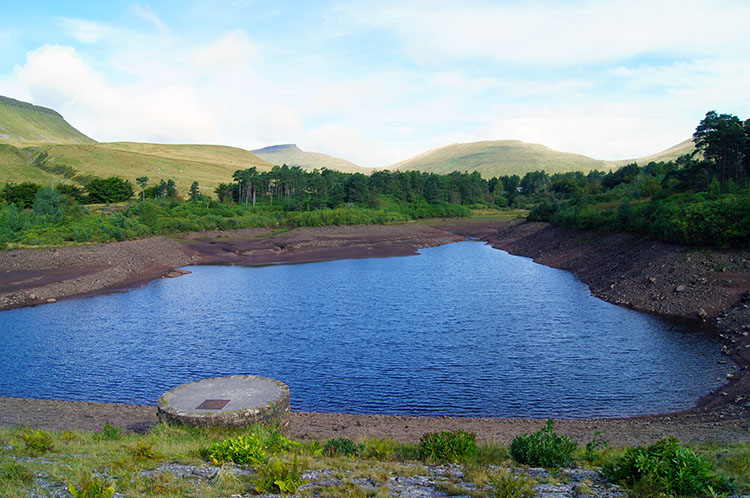 We set off from the large car park at Taf Fechan on a beautiful September morning. Straight away Steve and Dave headed off in the unintended direction, north east instead of north west but in hindsight the oversight proved to be a better option than following the tarmac road I had originally plotted so I have shown it as we walked on both the map and in the downloadable route maps. The north east direction up a bridleway led us to Coetgae-llwyn where we joined the Taff Trail which we followed west and then north west towards the Neuadd Reservoirs. As we neared the reservoirs the mountains came into view, a beautiful sight in in the bright morning sunshine. The awesome view of the mountains spurred us on towards them. 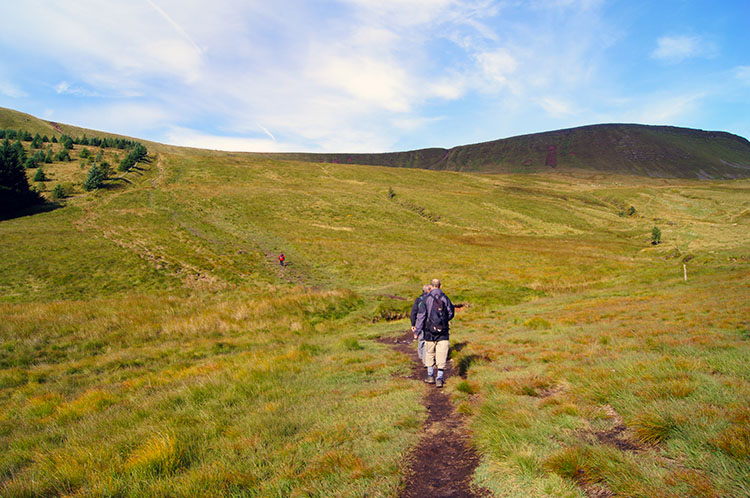 On the climb to Twyn Mwyalchod 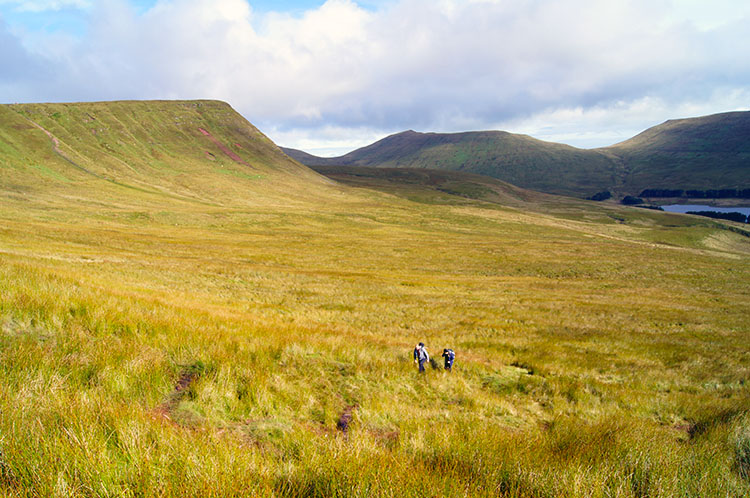 Once we had crossed the dam wall of Lower Neuadd Reservoir we walked to a gate. Once through the gate the first serious climb of the day began, a haul up a track to Twyn Mwyalchod. The track was quite boggy in parts which caused us to cross from one side of the path to another on more than one occasion. Near the top of the climb we actually waded through a little water trickling off the slope and at the very top up a small landslip but it was never difficult, just hard on the steeper sections. While climbing the small breaks we took were filled by the views we took in all around, mainly back down towards the reservoirs and to the north where Cribyn and Fan y Big stood tall on the mountain line. At the top of the climb there is a trig point nearby, it standing at 642m high on Twyn Mwyalchod. 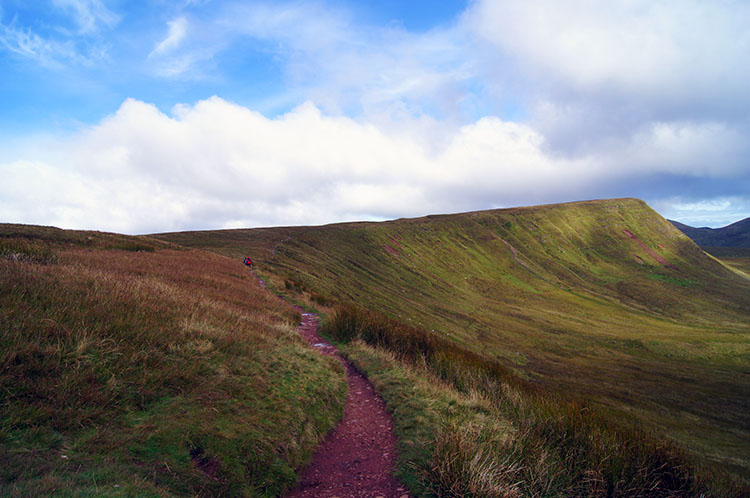 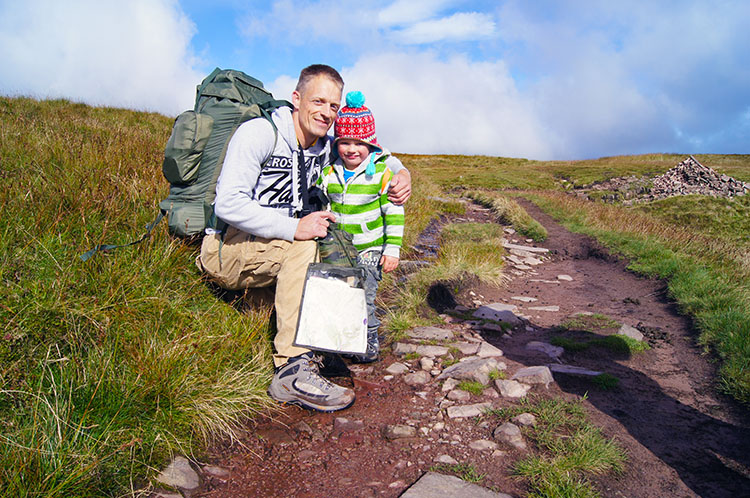 After the short and fairly strenuous climb we had a pleasurable walk along the Graig Fan Ddu ridge. Ascending ever so slightly as we walked along it was easy going and the views continued to amaze. Views south towards the Pentwyn and Pontsticill Reservoirs were particularly notable on this section of walking. Looking ahead drew us to our intended mountains. As we continued walking we noticed a chap and a very young walker just ahead of us. When we caught them up we had the pleasure of meeting five year old mountaineer Ryan Bowkett. His dad James was accompanying him on his quest to climb the highest Brecon Beacons mountains. After a chat with father and son we wished them and good day and strode on. 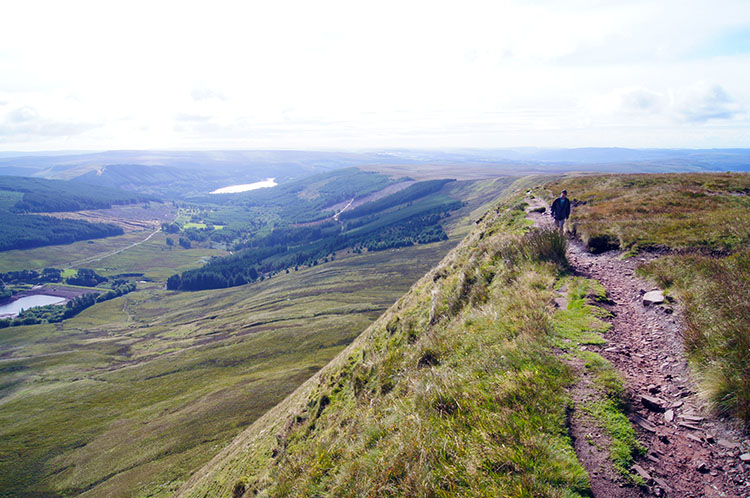 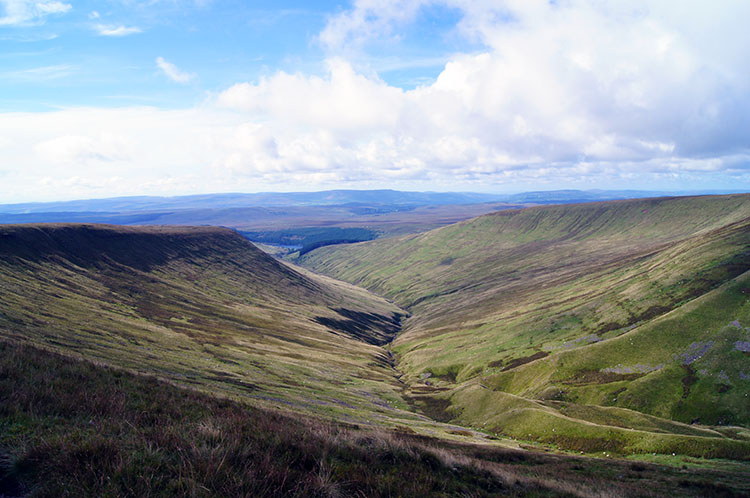 Our walk along Graig Fan Ddu ended at the Cef Cul cairn but the ridge continued in the same direction, only now it was called Rhiw yr Ysgyfarnog. The unpronounceable, for an Englishman at least, then changed name again, albeit the same ridge but now called Craig Gwaun Taf. This led us towards Bwlch Duwynt from where we would make the climb to Corn Du. As we continued on the easy uphill gradient I took time out to look across to the west and south west. There were two unbelievably sumptuous valleys to look down on, the first one being Nant Ddu and the second Nant Crew. I will not forget the views into either valley, both being cut out by glaciers into sweeping patterns of perfect symmetry. 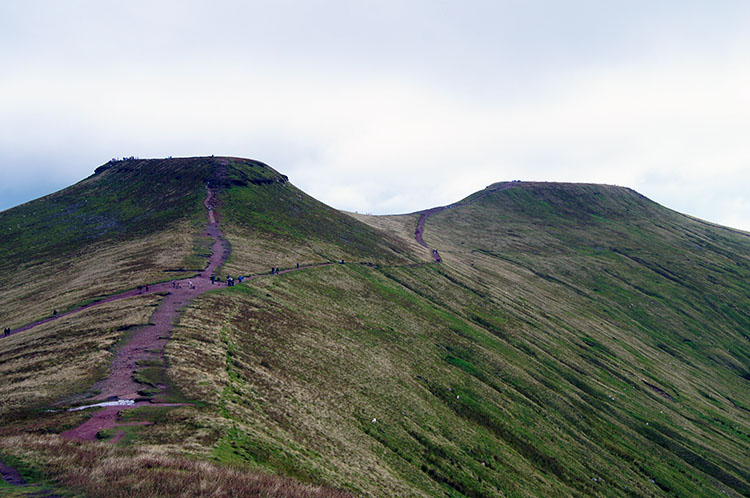 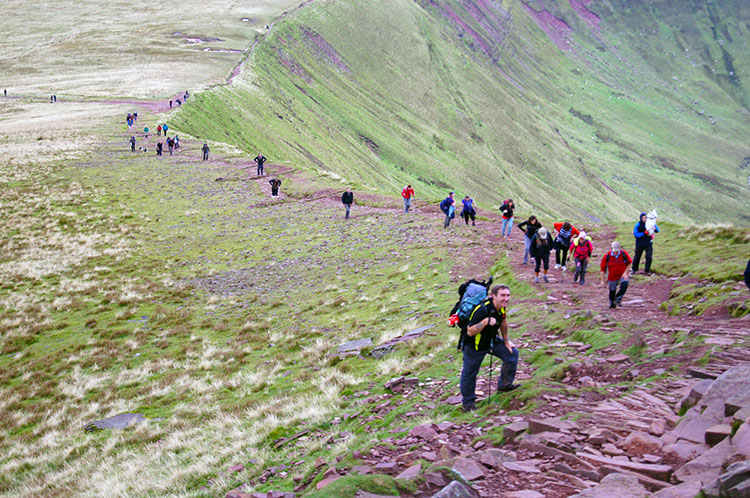 Walkers climbing to Corn Du from the Storey Arms track

The end of our wonderful ridge walk would come at Bwlch Duwynt. However we stayed on the ridge for just as little longer, stopping for a break just short of Bwlch Duwynt. We made that decision as we had spotted droves of people on the summit of Corn Du and a further line of people climbing up towards the summit from the Storey Arms track. Better have a quiet refreshment break first we thought. As we enjoyed our peaceful break we continued to be amazed by the numbers walking up the track, easily into the hundreds. It was quite a sight to see the ever changing but relentless line of walkers. 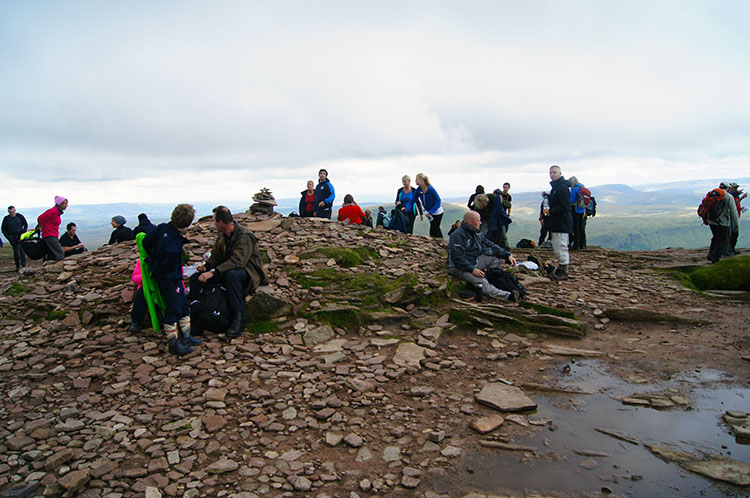 Relaxing after climbing to the summit of Corn Du 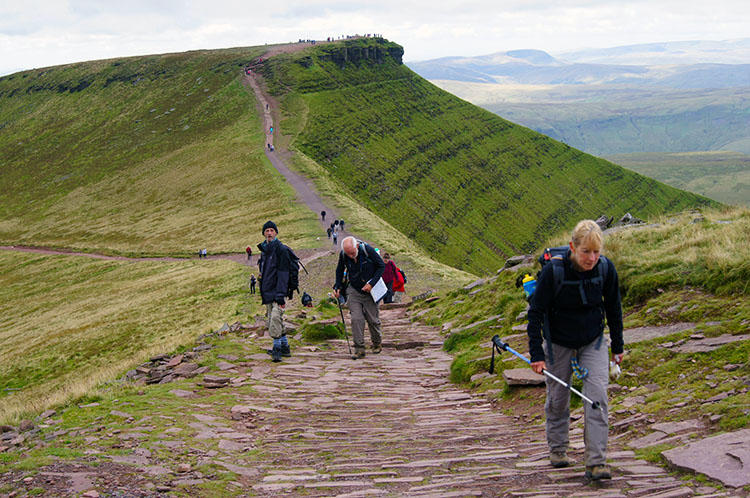 After our break we dropped down from Craig Gwaun Taf to Bwlch Duwynt and then climbed the 50 metre ascent to the summit of Corn Du. I was a short sharp haul to the top and once there we ended our relative solitude by joining the masses of walkers and pilgrims who had made their way up the mountain. From the summit the views north to the lower ground of the Usk Valley were awesome, patterns of fields of varying colours either side of the river making for a lovely tableau. At the summit many people were sat taking refreshments and many more were looking down to the valley below. After taking fill of the view ourselves we left Corn Du and headed down the roller coaster path to the saddle linking it to Pen y Fan. Then as before on Corn Du we made a similar length and almost equally height gain of 50 metres to the top. 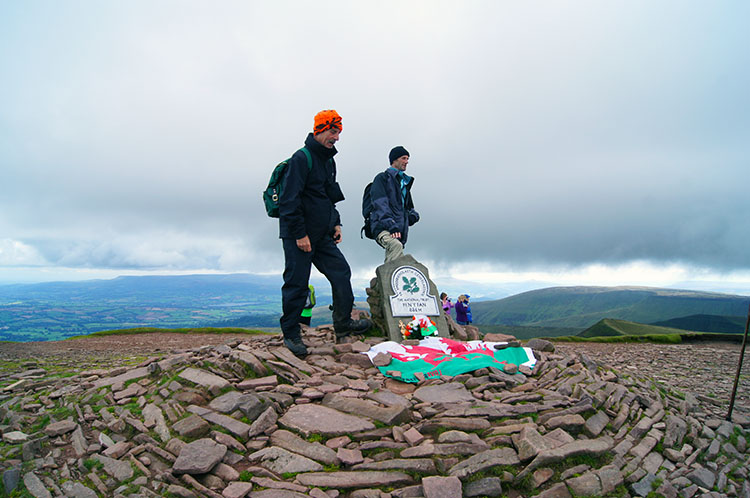 Steve and Dave at the summit of Pen y Fan 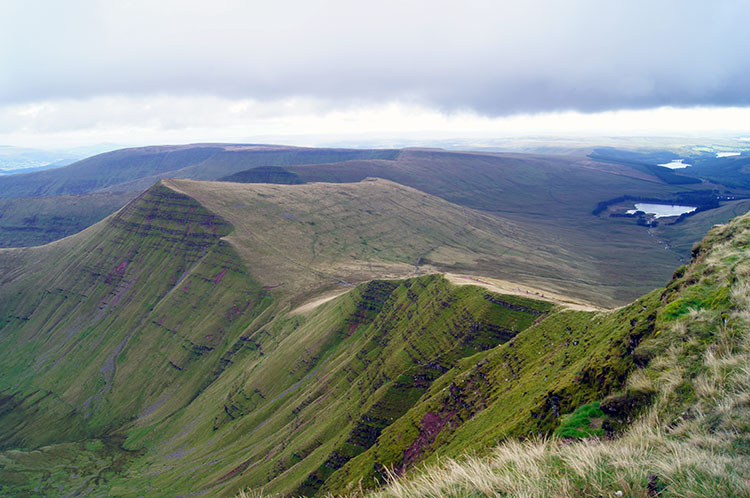 Done it! At last Pen y Fan was achieved, the highest point in the Brecon Beacons done and dusted. But by no means was the walk over though, our enjoyment continued. First we chatted to some people on the summit, some veteran servicemen in particular. Then as we left the summit to head towards Cribyn we came across more pilgrims, lots of them in fact. There were about fifty or so Plymouth Brethren on the mountain. All seemed to be enjoying themselves though I hoped they had better and warmer clothing should the weather suddenly change - they were not exactly carrying extra as far as I could see. Passing the pilgrims by as they rested in a natural wind break just short of the mountain top we continued down to the next saddle, the one linking Pen y Fan to Cribyn. At the saddle we embarked on our second biggest climb of the day, a full 135 metres from the bottom to the summit. 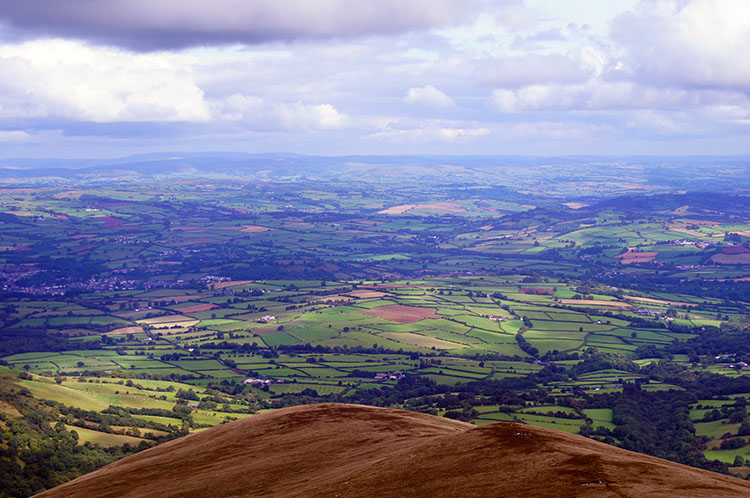 The view north to Brecon and the lowlands from Cribyn 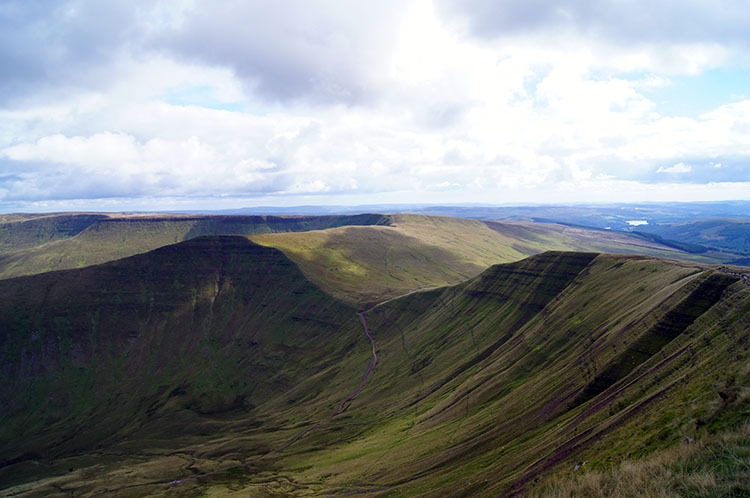 The weather stayed fair as we crossed the highest peaks of the Brecon Beacons though cloud did roll in to take out the sun from time to time. When it did there was a cold breeze which kept us moving along. When the sun came out we could stop and take stock and look around; there was no hurry to be off the heights. Once at the summit of Cribyn we did stop for a short while and while chatting we contemplated following the track we could see at the next saddle, Bwlch ar y Fan straight back to Taf Fechan. Despite thinking about it I just could not do it, Fan y Big was there ahead of me and waiting. 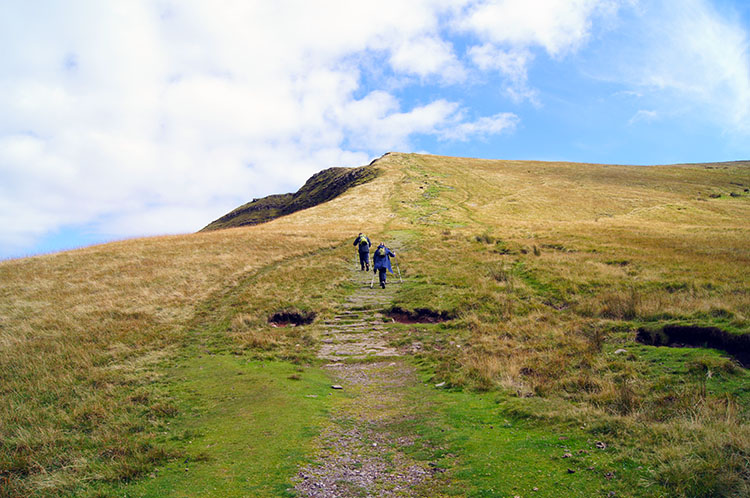 On the final climb to Fan y Big 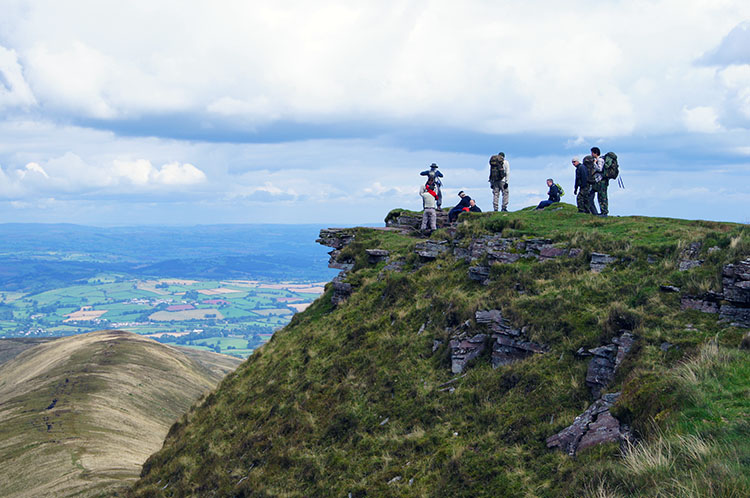 Lofty view from the summit of Fan y Big

So with my decision made I hastily scurried down the east slope of Cribyn to Bwlch ar y Fan with Dave and Steve ambling down behind me. As I crossed the fledgling stream of Nant Yr-hen-hoel which fed the Neuadd Reservoirs I looked back to see my colleagues sit down halfway down the bank of Cribyn. They waved me on and up - I immediately knew they would not be climbing Fan y Big but instead meet me on an intersection of the valley track on the way back to the start of the walk. The climb to Fan y Big was a tough haul, it being the last of five climbs of varying height and length during the walk. This final one of 120 metres height in 500 metres of length was a good lung stretcher. I was glad to reach the summit. 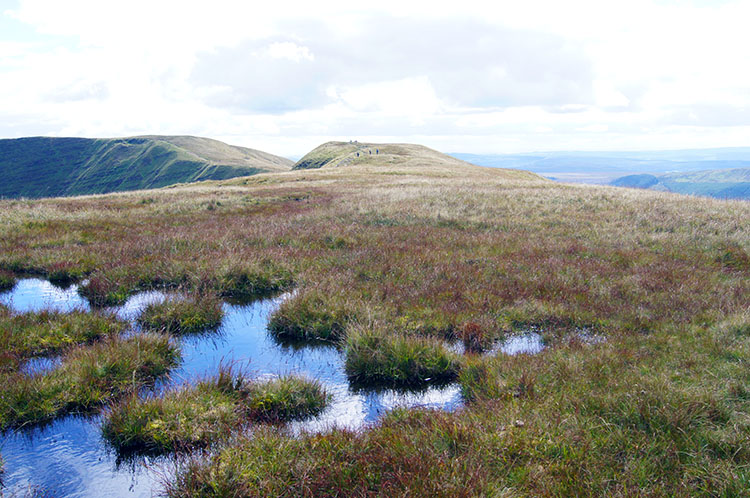 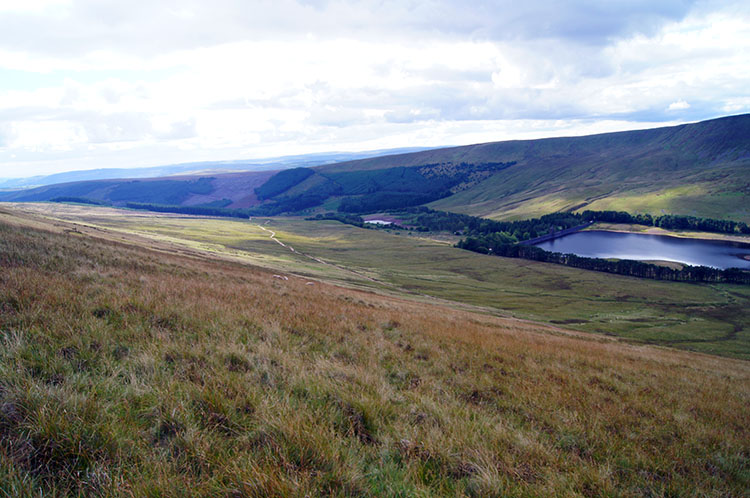 Descending on easy slopes to the valley track

All the climbing was now done and I could enjoy a final walk at height from Fan y Big to Craig Cwmoergwm before traversing down the easy grassy slope of Tor Glas to meet my walking colleagues. I was in maximum enjoyment mode, the walk had proved every bit as thrilling and spectacular as I had wished and now I could simply enjoy a nice walk along the valley back to the start. While descending the slope I decided to stop and sit down for five minutes and take in all of the local environment that I could. It was a special five minutes. as I looked down from my high perch above the track I spotted Dave and Steve walking along it so I resumed my walk and traversed down to them. 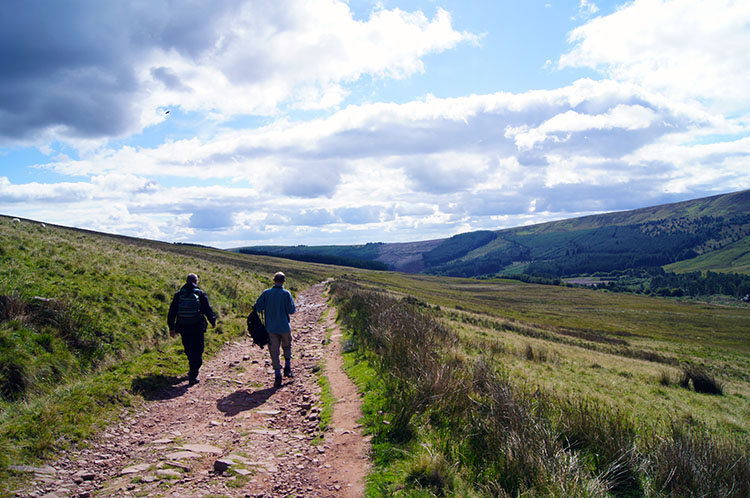 Walking back towards Taf Fechan 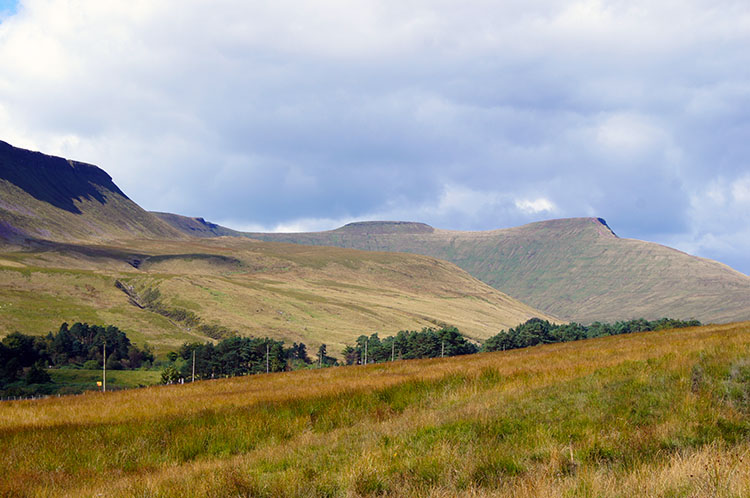 A final look back to Pen y Fan

The final stage of the walk from Tor Glas back to Taf Fechan was an enjoyable stroll. As we walked Steve mentioned "This walks gets into my top ten" an accolade indeed from a man who has walked many wild places and on many famous walks. He went on to say "It has everything a great walk should have. Great tracks, outstanding mountains, lovely scenery and varied terrain". Dave and I had to agree, it was a walk of outstanding merit and soon we came to the end of it. The walk may have ended but the memories of the walk will remain. This has to be the finest upland walk in the Brecon Beacons.