Summary: A circular walk starting from Pont-rhyd-y-groes in Ceredigion, mid-Wales. The walk follows paths, tracks and trails, many of which were used by lead miners before the local mining industries declined. Sites of industrial heritage still survive including a fine example of a water wheel which is found at the starting point of the walk. From Pont-rhyd-y-groes the walk is accessed by crossing Ystwyth Gorge by a wooden miners bridge which is crossed once more on the return to the village. In between there is woodland, forest, a hill fort, mid-Wales countryside and the stunning gorge of Afon Ystwyth to enjoy.

The Walk: The lads annual walking break 2016. Steve had the option on where to stay this time around and he chose Aberystwyth. As is normal it was my task to find the walks and while a couple, including a route to Cadair Idris were straightforward affairs the remaining walks required a little investigation. I looked up 'Ceredigion walks' and with a little more investigation I found this gem. I had walked through Pont-rhyd-y-groes on a linear walk through Wales in 2013 which linked Conwy Castle and Cardiff Castle, a walk which was loosely based on the Cambrian Way. On that occasion I had kept to the main road but while walking through Pont-rhyd-y-groes I had stopped for a rest. While taking my break then I had looked across to the woodland below me which shielded a deep gorge just to the west of the road. I had imagined how beautiful it was but I had never thought I would ever return to walk it. Steve's choice of Aberystwyth had made that imagination a reality. I had found a 'Spirit of the Miner's' walk on the Internet and I loosely based my route on that. 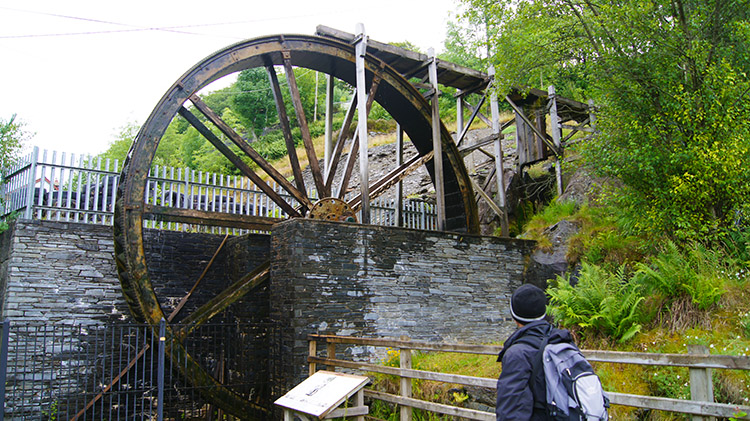 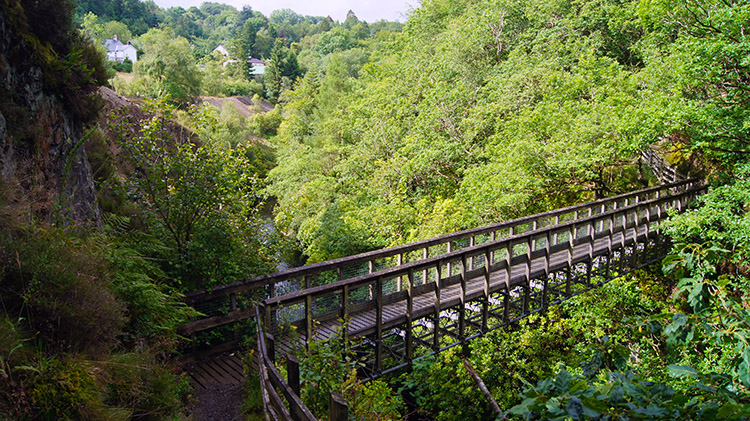 After a routine fun night out in Aberystwyth Dave, Chris, Steve and I travelled country roads to Pont-rhyd-y-groes and parked up next to the working water wheel. Admittedly the water wheel is a reconstruction but as stated on Plwm, The Heritage of Cededigions' Uplands website, it is a newly perfectly reconstructed heritage-mining wheel, which in the nicest possible way is a “fake”. From the water wheel we followed a sign leading down from the road to a steep path which led us down to the Ystwyth Gorge. After meandering down the path around a plantation of conifers we spotted Miner's Bridge below us. The footbridge was completed in 2002 by Plynlimon Heritage Trust on the site of a former miners’ footbridge, built in the nineteenth century, when Pont-rhyd-y-groes was the centre of a thriving lead-mining industry. The old bridge is thought to have collapsed around 1920. We read the information board explaining the history of the site and then after admiring the spectacle of the view from the bridge to Afon Ystwyth raging through the gorge we crossed to follow the old miner's tracks through Coed Maenarthur Forest. 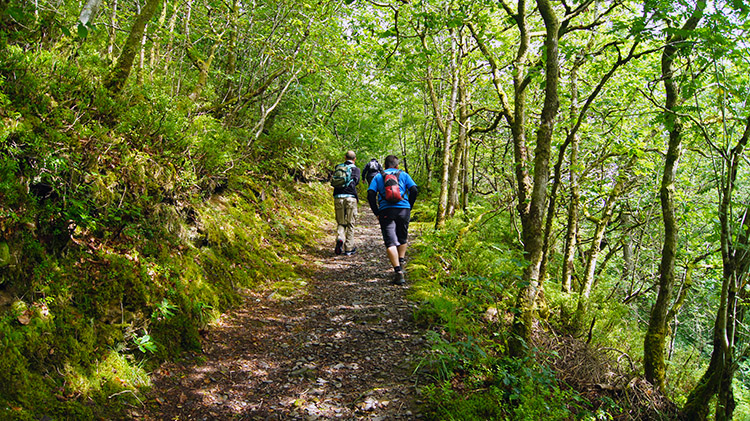 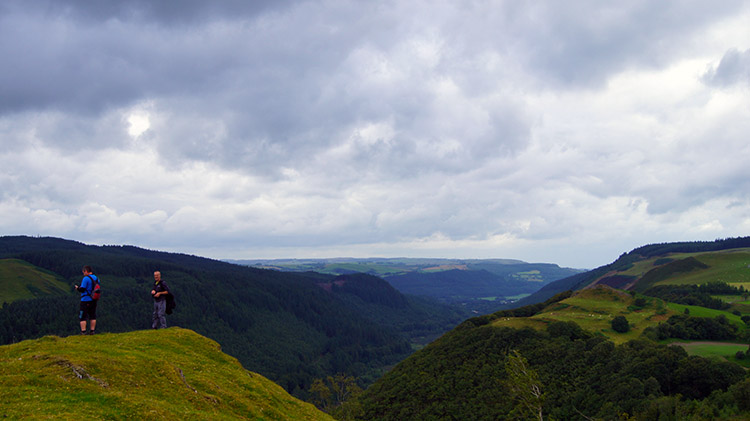 Morning sunshine was filtering through the high tree canopy to display a dappled spectacle of light on the forest floor. It was ever changing and delightful. Soon after climbing a steep path through a dense area of trees we reached a wide forest track which we followed in an anti-clockwise direction from 6 o'clock to noon. A back in time walk so to speak which took us to the north side of the forest. Here we came to a house and followed a vehicular tree lined track on a course due north out of the forest to reach a road. We followed the road east and north for a few hundred yards before leaving it to track south-east to Maen-Arthur and beyond through a wood which led us to open field. We had reached the site of the ancient hillfort of Castle Grogwynion which we explored. The views from the elevated hillfort to the surrounding countryside and to the valley of Afon Ystwyth were spectacular. Note: the route files for download stick to the permissive path. To visit the hillfort follow a path due south just after passing Maen-Arthur farm. Return to the route on the same path after exploring the hillfort. 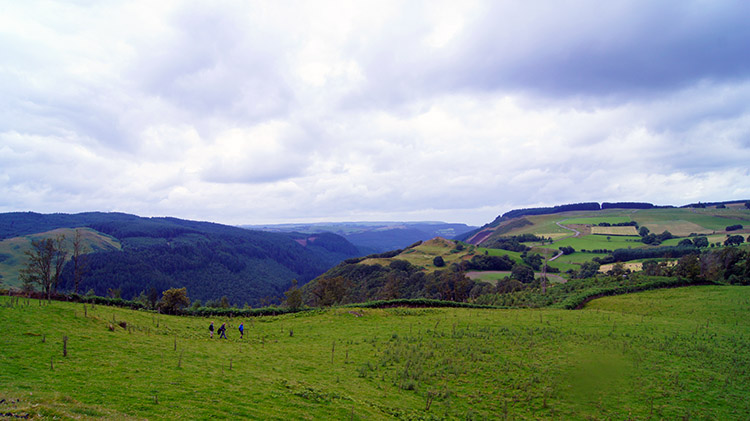 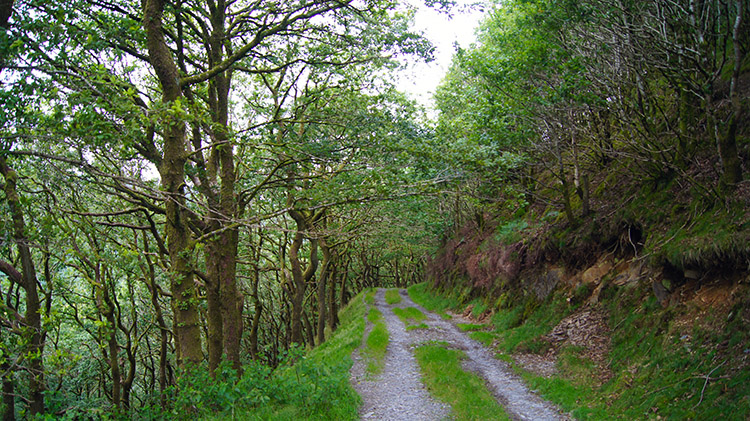 Track leading down to Afon Ystwyth

Despite cloud filling over the area it did not descend to ground and as we continued our walk on the higher open ground the views stayed impressively extensive. We did get a five minute shower which inconveniently began just after we had stopped for a short refreshment break. It curtailed the stoppage and we were soon on our way again, if only to warm ourselves from the brief inconvenience of the cloud, rain and accompanying cold. We soon warmed again with motion. After a couple more field crossed we were on a forest track once more, the track sides being on a slope which had been mined and quarried. It led us down on a zig-zag course to the valley of Afon Ystwyth. 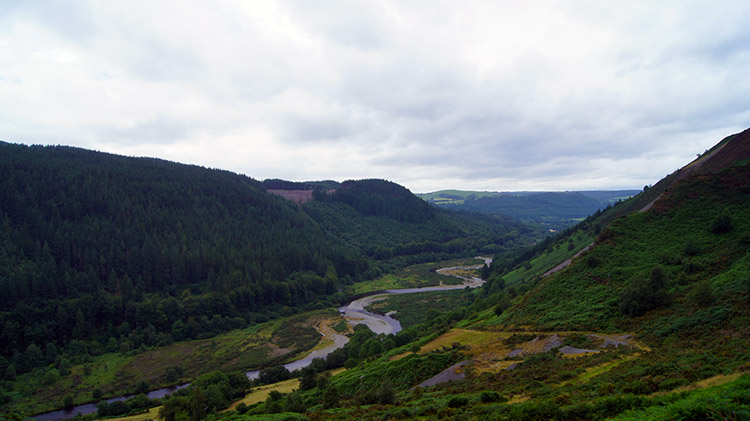 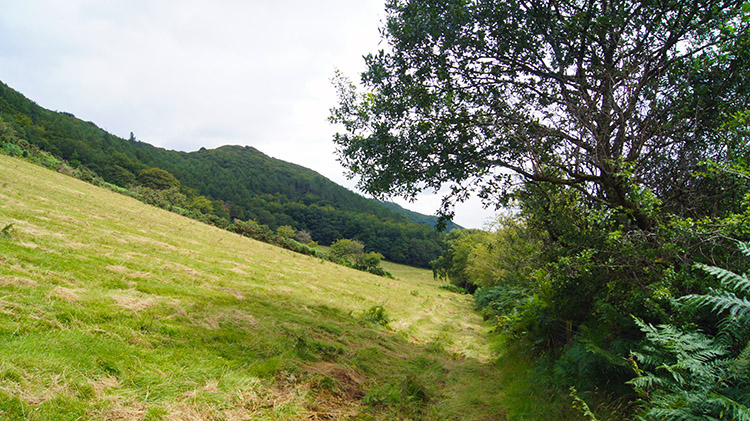 Field edge path back to the woodland

As we descended we could hear the sound of activity below us which grew louder as we got nearer. Once at the bottom of the zig-zag path I noticed a marquee being erected for some purpose. It was in a field beside the river just away from the path and while the lads kept to the path I scamped off to investigate. I got to a point on the far side of the field where the action was taking place. Across the field there were old converted vans and old campers parked. It very much looked like a commune setting up for a concert and a group of young men were busking on a bench while the marquee went up in a very leisurely fashion. I waved to them as I walked by back towards the path and they waved back in a friendly manner. That was that and I walked back to the lads without exactly finding out what was to take place. It was fairly clear though and had we wanted to join in I guess we would have been welcome. 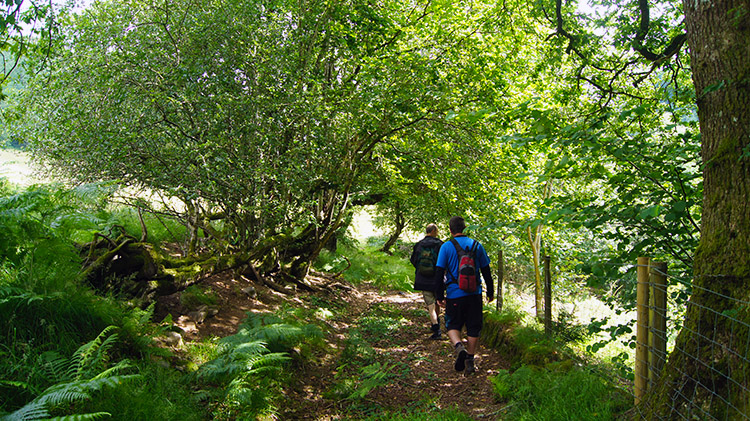 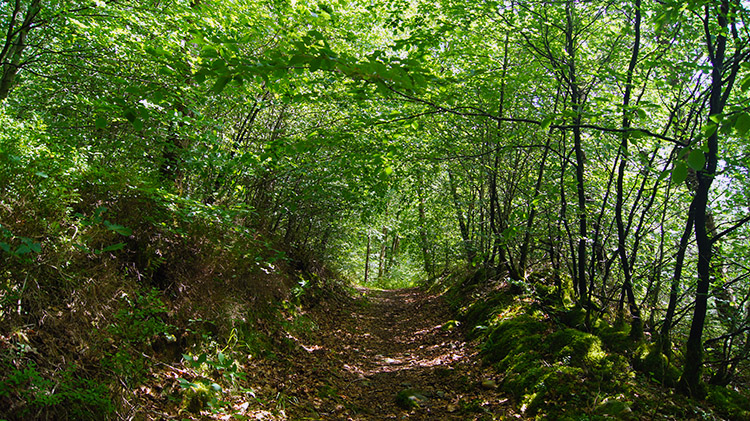 Holloway leading to the gorge

I soon caught up with the lads and reported in. They had expected my report to be on the lines it was. Along the path on a field side we went and then we followed the path back into the woods. Now we could see for ourselves what the gorge of Afon Ystwyth looked like close up. Spectacular we hoped... and expected. First though we had narrow woodland paths to follow and they were fascinating to walk along. Over natural rock outcrops one minute, around tree trunks the next. These paths meandered in no strict fashion, just keeping to the natural contours of the land. They often went up steeply soon after plunging steeply down in the confines of the gorge. A roller coaster path which kept us tantalisingly away from the rushing water of Afon Ystwyth which we could hear screaming through the tight confines of the gorge below. For the moment we were stymied. 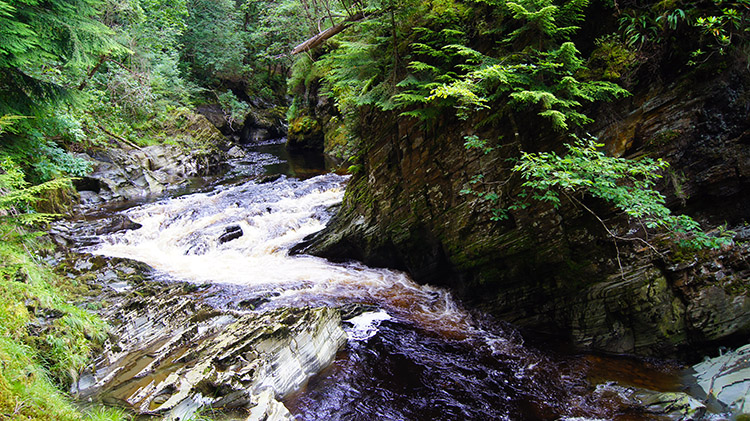 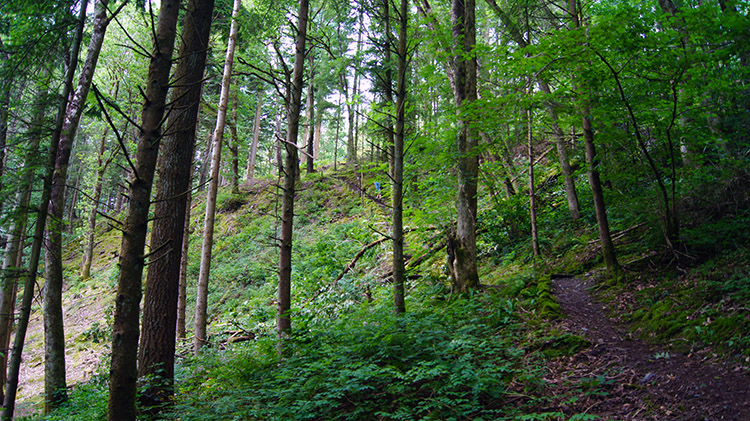 Then we came to another path forking down to our right. It had to be followed despite the knowledge it would result in a steep climb back up to the path we were on. "I am not going down this one just to climb straight back up again" said Dave, tired of hauling himself back up unnecessarily. "I'll check it out Dave" said I and so I went down to see what the path led to. I was not long in shouting up to the lads "Come on, this is amazing" and adding "you will regret not coming down here. Come on".

The path had led to a bend in the gorge which provided a great platform to watch Afon Ystwyth surging down in its tight confines between the narrows of mini vertical cliffs either side of the river. It was a mini wonder-world in the depths of the woodland. I enjoyed it thoroughly and from my promptings so did Dave, Chris and Steve. The four of us stayed down in this mini paradise for quite some time. It was a breathtaking sight, such a natural wonder. The sound of birdsong and other life which had kept us entertained throughout the woodland walking before the descent to the chasm was completely gone now. Drowned out by the forceful noise of tons of water forcing its way through the tight gap. It looked on the surface as if it was boiling. After what seemed an age we left the scene with much reluctance. 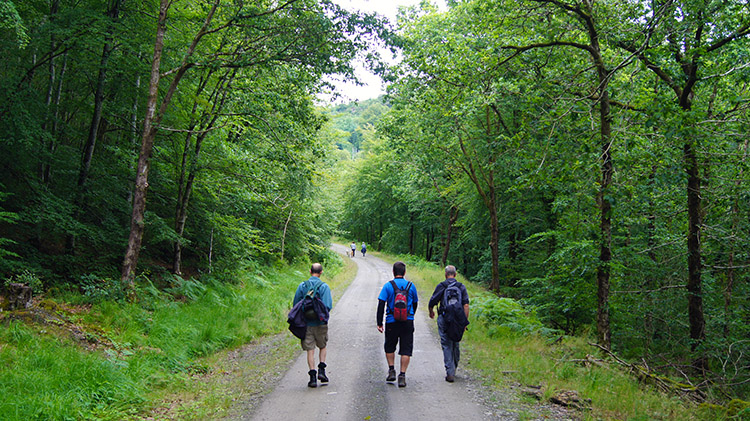 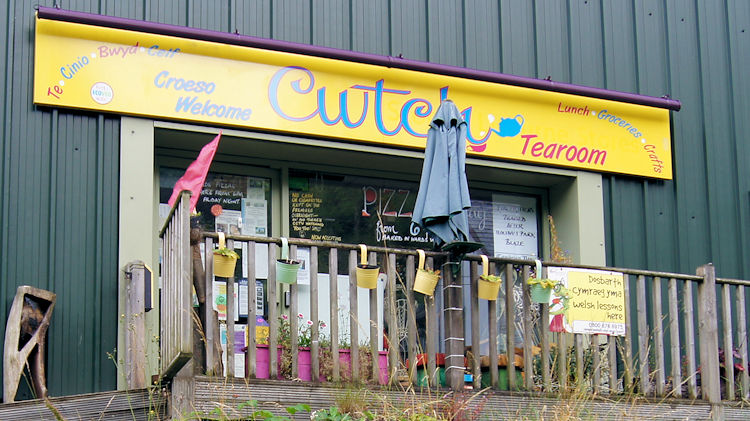 We climbed back up the steep path from Ystwyth Gorge to the main forest track with considerable effort and with hands on knees caught our breath recovered to carry on with the walk. First it took us along the forest track to the path which led off to the Miner's Bridge. Here we spotted other walkers ahead of us. It was early afternoon and a few people were out walking their dogs. On the path down to the bridge I noticed a rock which had a Campaign for Nuclear Disarmament badge carved into it. Some local has the right idea.

We crossed the bridge for a second time, climbed back to the road from where we had started and agreed it had been a lovely walk. To cap it off we retired to Cwlch Tearoom which was on the opposite side of the road to the water wheel and enjoyed tea and cakes. Lovely they were too.