Rhossili Bay, Worms Head, Rhossili Down and the Beacon

Summary: Despite being a walk of moderate length and moderate height gain I have deemed to rate the walk as technical for the simple reason that the crossing of the causeway between the mainland and Worm's Head at low tide is a difficult venture. Much care has to be taken during the slippery crossing, a mix of washed stones, many of which are encrusted with seashells, and of jagged sharp rocks protruding from the ground at all angles. The reward for the care and effort of crossing to Worm's Head, which can only be done at low tide, is worth it though. It is a magic place. Afterwards the walk continues along the magnificent Gower coast before cutting inland to Rhossili Down where fantastic views can be enjoyed from the 193 meter high trig point. 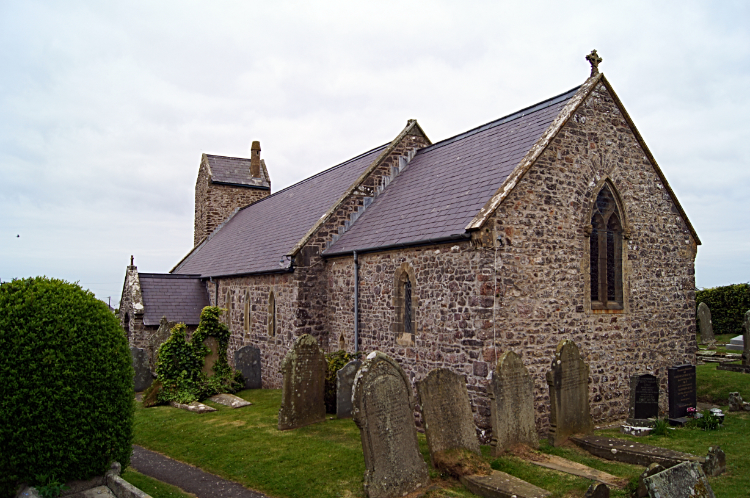 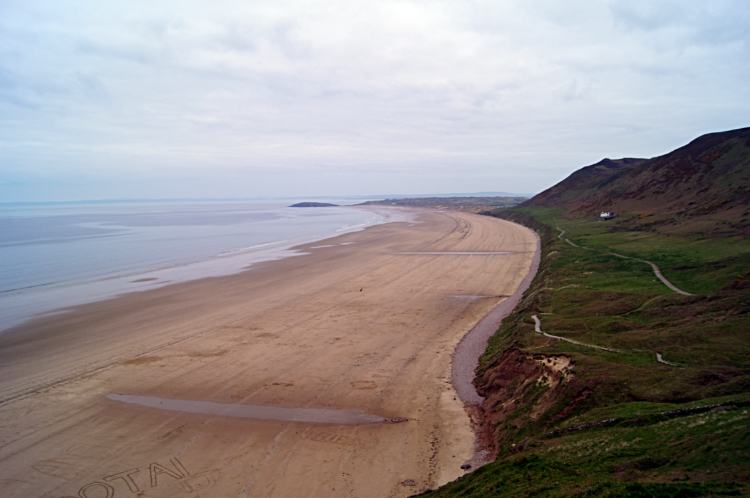 Before I undertook this walk there was a very important thing I had to check. The tide times. Worm's Head is an island, albeit one which is attached to the mainland by a coastal causeway at low tides. But it is cut off from the mainland at high tide and I would not want to be stranded. The window of opportunity for crossing over, enjoying the island and getting back is two and a half hours either side of low tide. Plenty of time but you would not want to get it wrong so check the tide times with the Coastguard before heading for the island. Their message is plain enough as to the consequences of folly: 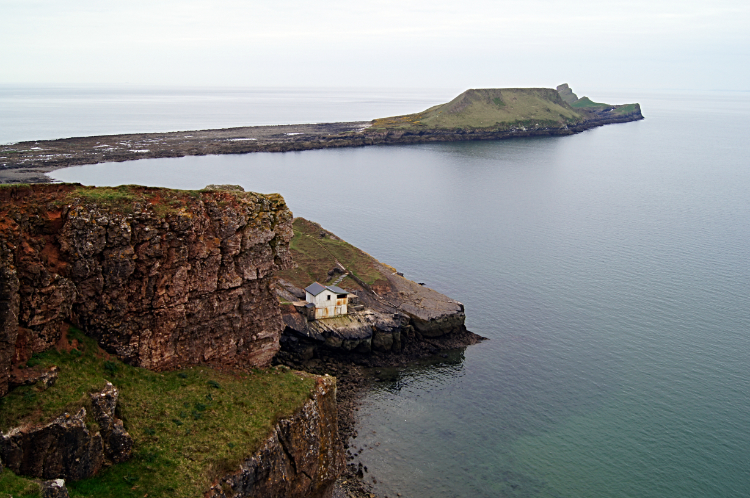 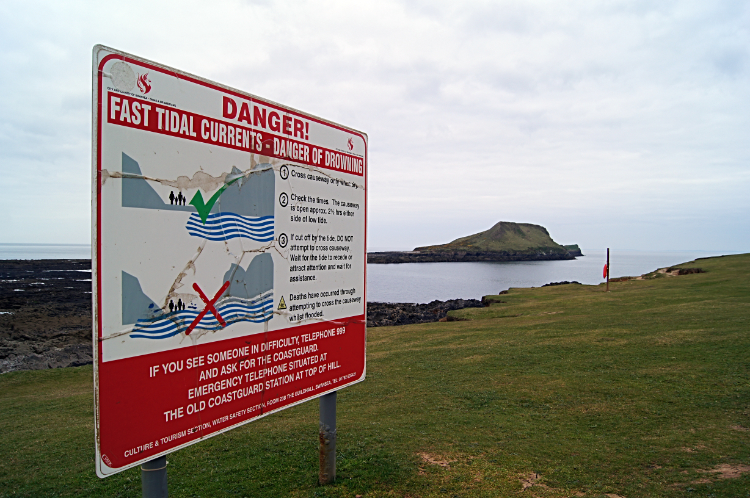 Having checked the tide times beforehand I set off from Rhossili around the time the tide was lowest. Thus I gave myself two hours to cross, enjoy the island and get back, therefore allowing myself thirty minutes leeway to get back from the island to mainland safely. It was just a half our walk from the start, including a look around Rhossili, including looking at the church and National Trust building which I passed on the way out to the coast, and a walk across the site of Old Castle Fort which has now been occupied by sheep and rabbits. So still ninety minutes of my safety time were allowed to cross the causeway and enjoy the island which was no fixed in my eyeline. "Plenty of time" I thought. 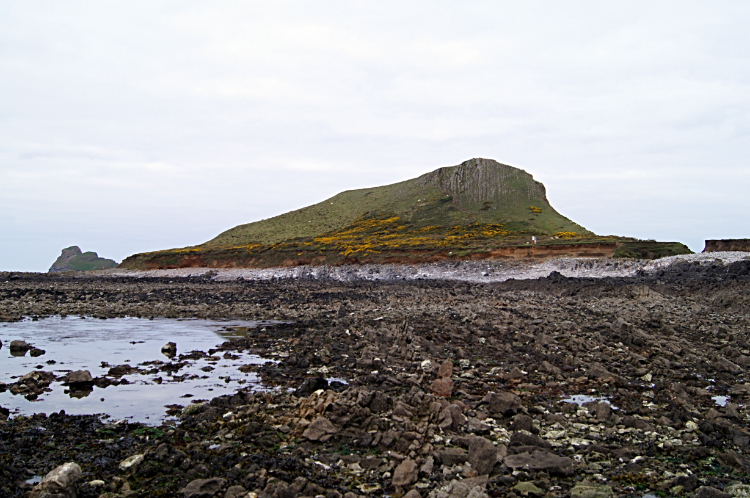 The causeway to Worms Head 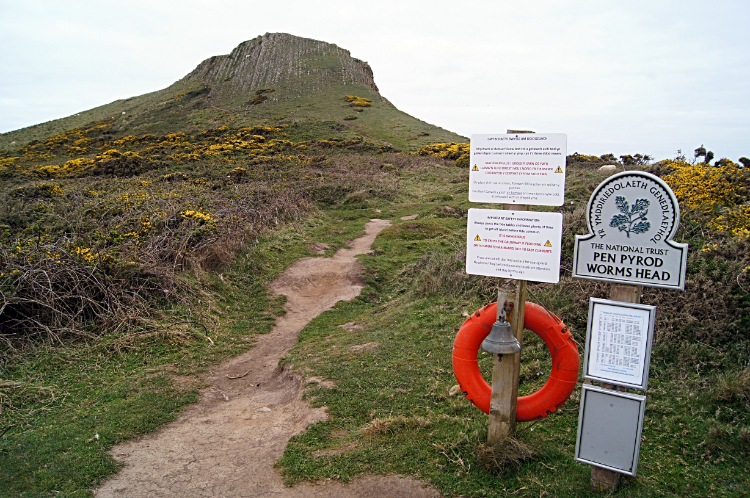 First step on to Worms Head

The walk across to the island is just 500 meters, ten minutes of walking I thought. It took me twice as long and then I did not muck about, meandering between the upright jagged rocks and slippery fields of sea slime and broken shells. More than once in my haste to reach Worms Head I slipped and only just managed to correct a fall. Even then I did not manage to keep my feet dry, one boot slipping down a gap in the rocks to below water level. Eventually though, twenty minutes after setting out from the mainland shoreline I stepped foot on to Worm's Head. 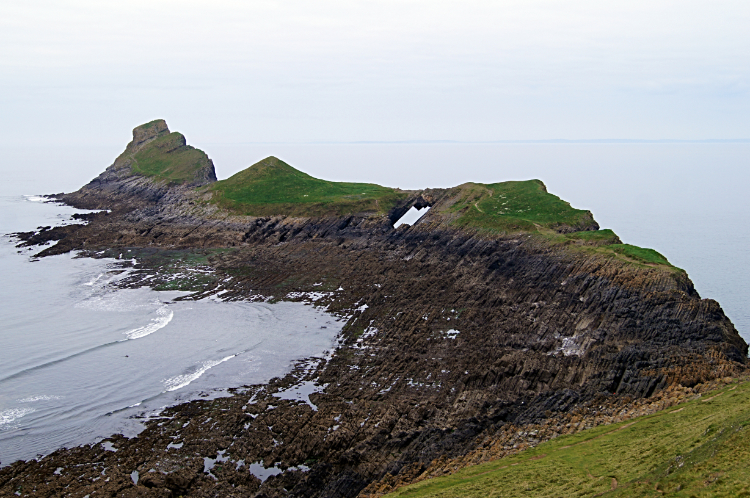 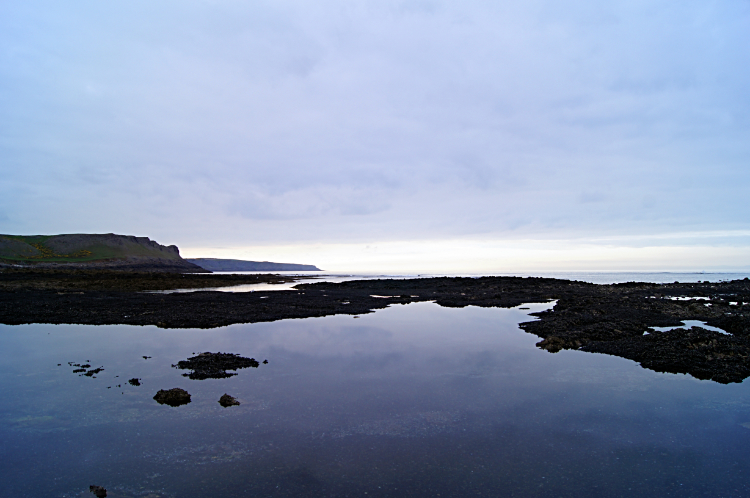 View from Worms Head to the Gower Coast

In the knowledge I had just a short hour of safety on Worms Head I still thought it easy to cross the island to the blow hole at the far end. "A little less than a mile to Outer Head and the same back. Piece of cake" How wrong was I? The first part of the walk on the iconic and historic island steeped in myth and legend was easy enough. A climb to the summit of Inner Head, highest point of Worms Head at 47 metres high was just grand. I was the only person there, such was the time of day. I had set off from family in Usk at dawn to make an 8.00am start and it was now just approaching 9.00am. The island sheep kept me company, about two dozen of them, all keeping a close eye on me. "Better keep going" I said to myself and crossed Inner Head to Low Neck. Soon I realised I was not going to get across the whole island. I had so wanted to stand on Devil's Bridge, a spectacular natural rock arch, and look down at the waves thrashing below. But getting across the neck looked harder than getting across the causeway. No path, but a sea of jagged rocks protruding at a sharp angle, would need to be negotiated. Both there and back. I looked at the options including dropping down to shore and climbing back up to Devil's Bridge. I could easily have crossed either way but could I have safely done the deed in time to beat the incoming tide due within the next hour or so. I prudently decided to turn back. There would always be another day. 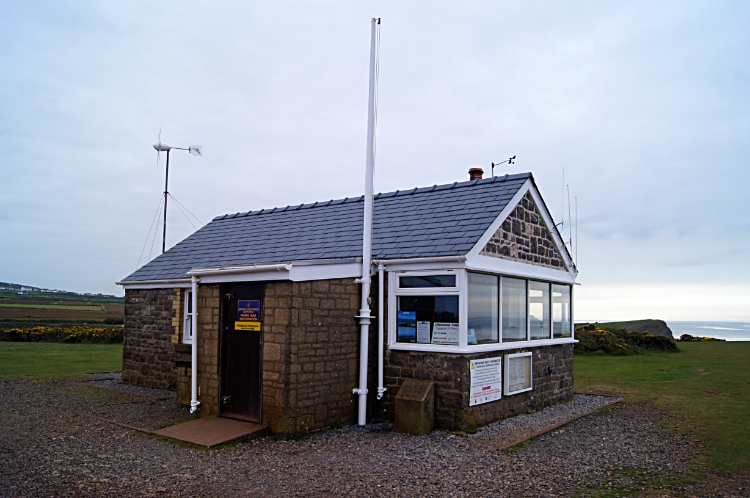 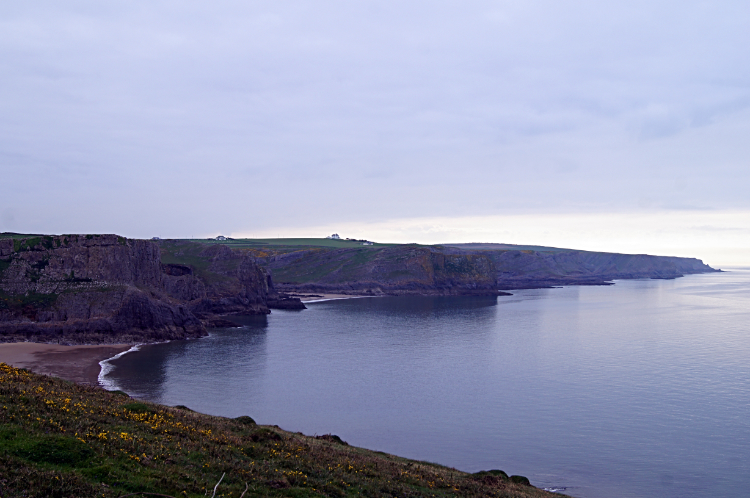 Still, I had been to Worms Head and I had enjoyed the view of the shapely island, including the natural arch of Devil's Bridge. And I was safely back on the mainland before the next high tide swept in. I was happy with that. Had I got stuck I would have had to wait until 6.00pm at least, not a thought I relished at all. So safely back, I started my next phase of the walk, a gentle stroll for a mile and a half along the renowned Gower Coast. The scenery is spectacular, the geology is fascinating and the path weaving behind and alongside inner cliffs a complete thrill. I had read this part f the Gower, a National Nature Reserve was a good place to see seabirds and with luck a glimpse of elusive Choughs and Dartford Warblers. Both species have residence here but no show was granted to me. More sheep were about, including a field full of young black lambs which was nice. 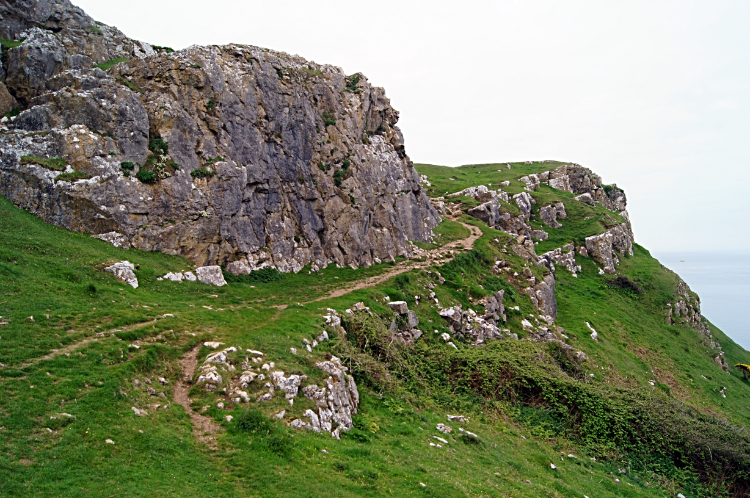 Path around the cliffs on the Gower Coast 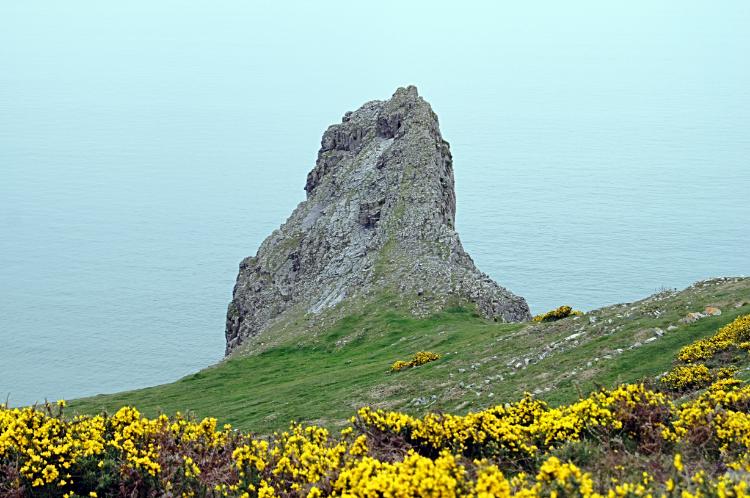 Example of the jagged cliffs of Gower

As I walked the fantastic path weaving along above the cliffs I saw Corvids. Rooks I think, but not the red beaked Choughs I had hoped to see. I also saw a small group of people way below me in a sheltered sandy cove. Ten of them, five adults and five children. They must have made an early start to the day too. The kids were busy making castles and the like in the golden sands. The adults were looking out to the gentle waves breaking on the shore. A perfect scene. As I continued along I was constantly drawn to look at the shape of the cliffs and rocks. Some recent collapses were evident. Narrow ridges heading out to nowhere, Striding Edges with no destination, were alluring but for me even a little too narrow so not an option. Other natural sculptures of harder rock standing proud deserved the attentive viewing I gave them. Such beauty. The end of my walk along the cast came all too soon. 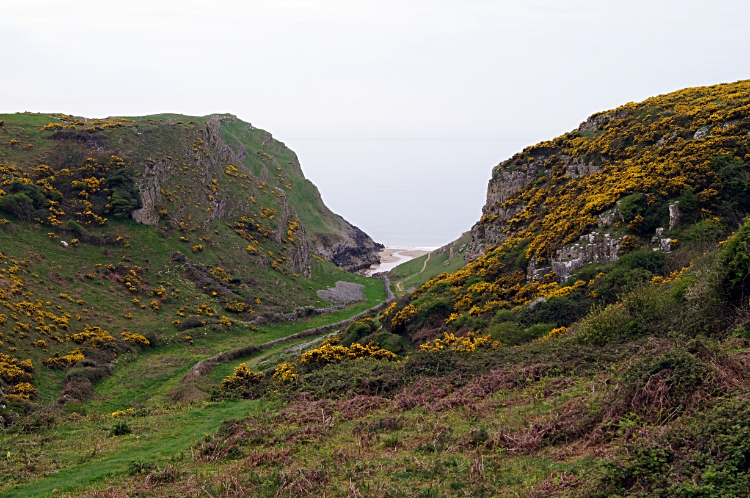 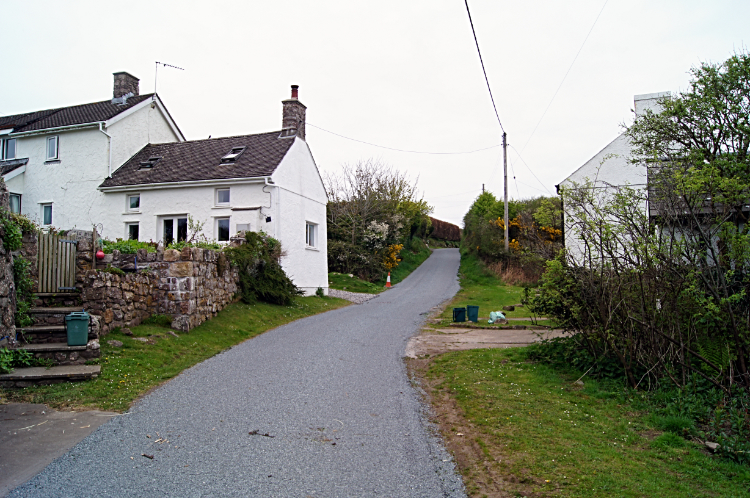 I headed from the Gower Coast by following a dry valley, lined with flowering gorse and hawthorn. The gorse was providing lushes of brilliant yellow to compensate for the lack of sunshine this day. It was the only piece of the party not to show. The path led me into the hamlet of Middleton, tenuously attached to Rhossili. The main street of Middleton leads up towards Rhossili Down, my next destination. A couple of single ox or horse ploughs adorned the front of a cottage which impressed me. I love old farm machinery being put to aesthetic use rather than abandoned as junk. As soon as I was beyond the last house on the rise I left the road to climb the down. Wild ponies watched me as I climbed on past them. When I was clear of them they got back down to munching. 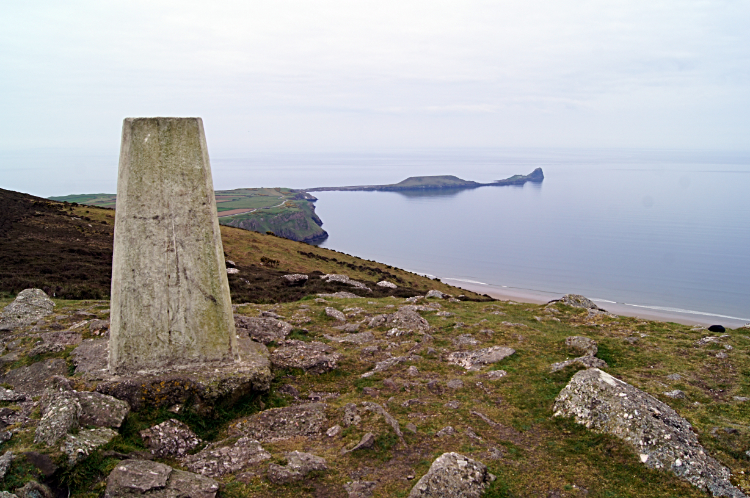 Trig Pillar on Rhossili Down 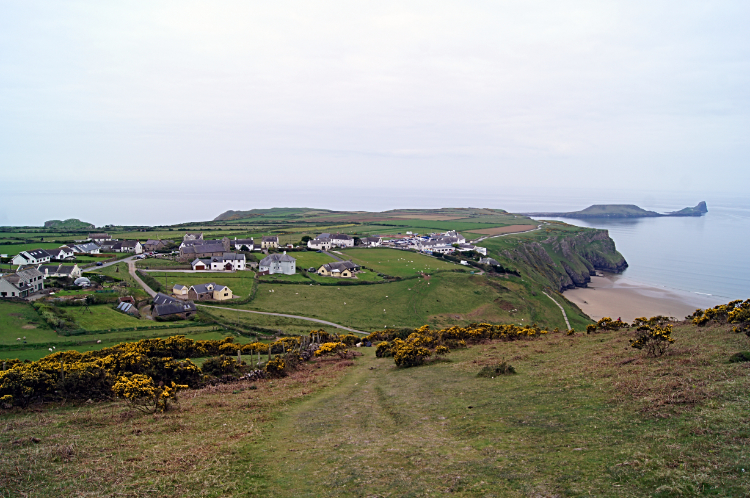 View to Rhossili from Rhossili Down

After fifteen minutes of climbing a little over 100 metres of the down from the last house I stood contentedly beside the trig pillar on top of Rhossili Down. At 193 metres high the view was great in all directions. West was the Irish Sea with the golden sands of sweeping Rhossili Bay a beautiful sight. North and west was the massive sweep of Carmarthen Bay with the South Wales coast sweeping out into the mist. Due north were Llangennith laid out before me and Llanelli looked ghostly across Afon Llwchwr/ River Lougher Estuary. The view east was pretty plain of the moor and farmland beyond but finally we get to the view south. A cracker. Here I looked down on Rhossili on its gorgeous green peninsula and back to Worms Head where I had been a few hours earlier. It was a fitting final view before I skipped down the path leading back into Rhossili. Wow, what a lovely walk it was. My first ever walk in Gower had not disappointed at all. Okay, on Worms Head, perhaps I would want to add standing astride Devils Bridge and look down from Outer Head to the Blow Hole. Of course I would.