Summary: After three days of excitement crossing some of the biggest mountains of Wales and by some of the most technical routes this fourth day of my Wales Coast to Coast took me through one of the most exciting river valley's in all of Wales and from the narrow valley pass to two impressive mountains which despite not attaining the magic three thousand feet height do still deliver thrills in their climbing and in their character. Indeed the first one is dubbed the 'Matterhorn of Wales' while the second marks the boundary between the northern highlands of Snowdonia and the lowlands of the Vale of Ffestiniog where I finished the stage. 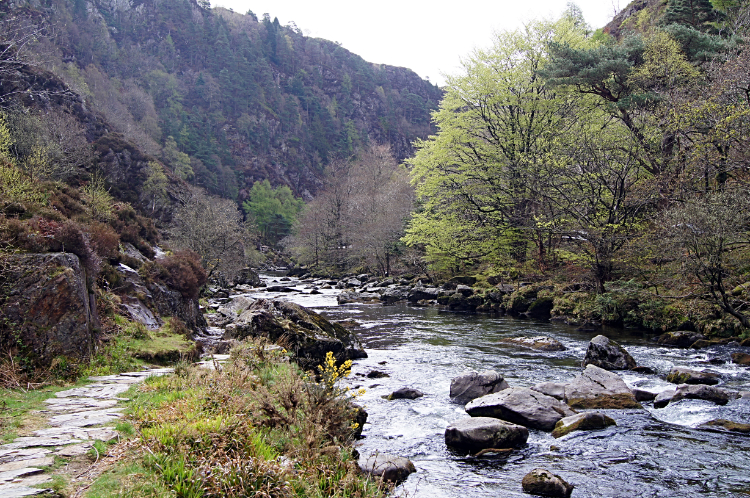 Approaching the Pass of Aberglaslyn 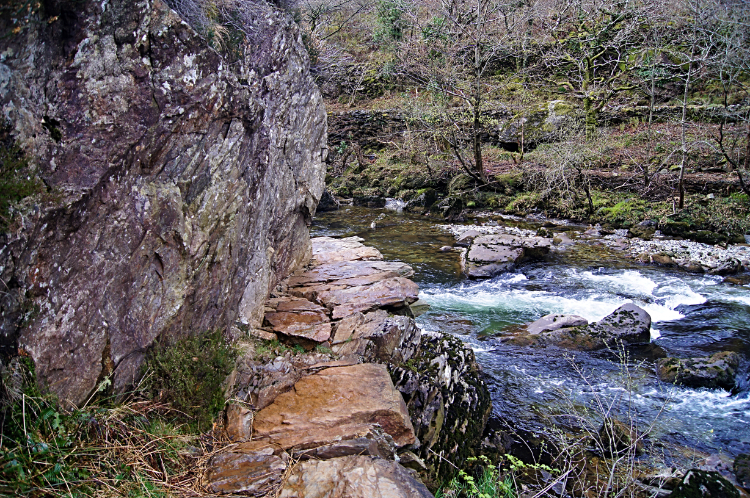 The narrow path with the hand grips

I thought I was finished with the scrambling and rock climbing. For now at least. Over the last two days it had been planned. First on Tryfan and the Glyders during stage two of the walk and then yesterday on the climb up to and across Crib Goch during stage three. Here I was just starting out on my walk by following a riverside path. Then again the path through the fabled walk through the Pass of Aberglaslyn is no ordinary riverside walk. The path which follows the east side of the Afon Glaslyn as it tumbles towards Beddgelert down the small rocky gorge from Nantmor twists and turns with the river and in times of flood is often submerged altogether. Fortunately the river was low this time but the dramatic feel of the river in this narrowest of stretches was unabated. The rushing waters still crashed against fixed outcrops and more recently deposited rocks in the water. It was only a half mile into my walk from Beddgelert when I came to the trickiest part. The path was forced by a rock face to turn sharply right in a direct line towards the river before veering sharply around the face of the rock. It was very narrow here, no one could pass if coming from the opposite direction. And due to the severe squeeze around the rock and the more severe consequences of a fall there were iron hand grips drilled into the rock. I was glad to hold on to them and swing around the corner. 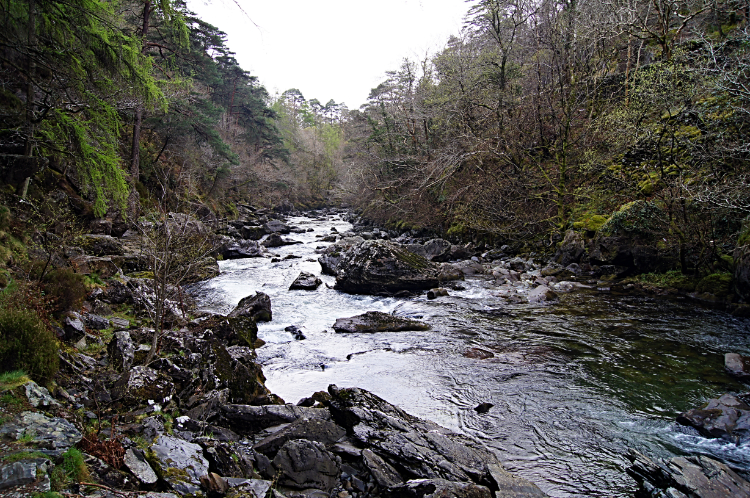 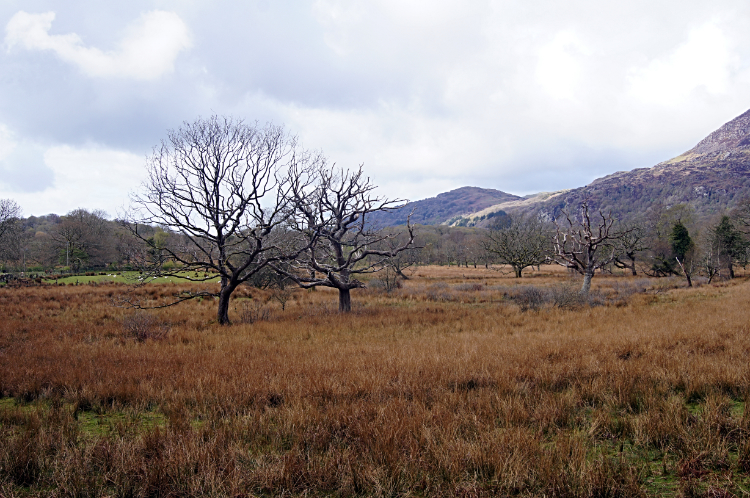 After the narrow squeeze the walk along the Pass of Aberglaslyn was a little easier but the rock and water forced the way to weave up and down and meander around for some time further. I will say the walk demanded constant attention but it was always fun. What a fantastic way to begin the fourth stage of my unique Wales Coast to Coast walk. I was thrilled, exhilarated and thoroughly warmed up by the time i reached the bridge near Nantmor which marked the end of the pass. It stood to prove you do not always need mountains for excitement. Next up for me was a time to calm down by walking on the practically traffic free road through the hamlet of Nantmor to Bwlchgwernog from where I followed the path leading east towards Croesor. 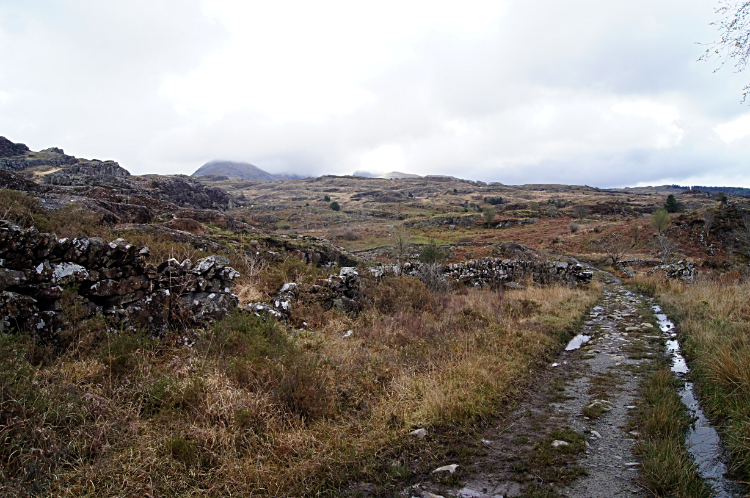 Nobody but me about now 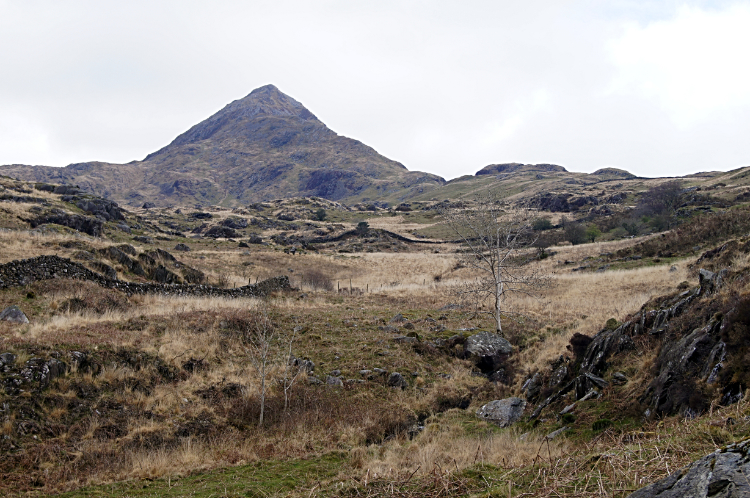 What was significantly different now, from the three preceding days in the high Snowdonia mountains, was that I was completely alone. There were no people to see anywhere; it was just me and the wild country. And I loved it. Even the sheep I passed on this stretch looked bemused at seeing me. "What is he doing here?". This was certainly different country, I was climbing all the time but at first it didn't feel like it. The gain of height was gradual and perhaps it was that because of the extreme climbs of the three previous days it did not register. From Bwlchgwernog, past Gareg Bengam and to the junction of paths before Croesor I was surprised to note I had climbed 200 meters. At the junction of paths I turned left, heading directly north-east to the pyramid peak of Cnicht. My next destination was the Matterhorn of Wales. 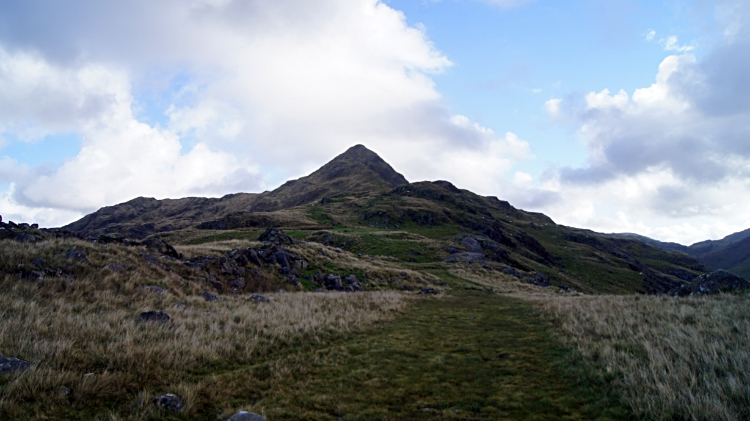 A bit of blue sky 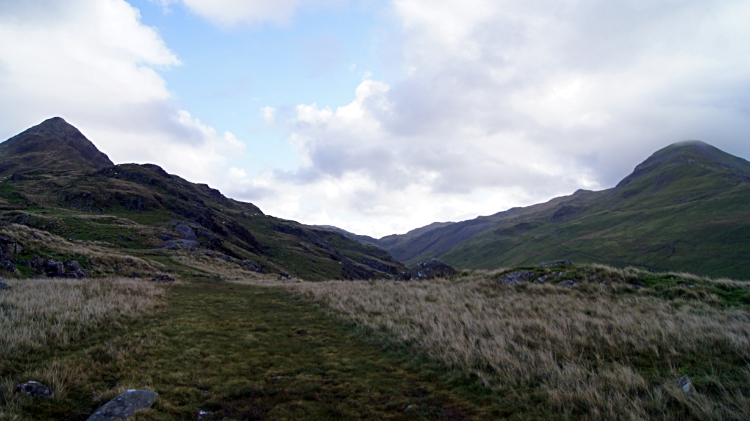 Still the climbing was steady and easy going as I headed across the untamed land towards Cnicht. Perhaps this was due to me carrying just a day pack. While on this special long distance walk of Wales I was supported on the first four days in Snowdonia by my wife Lil. So I was not laden with the full house on my back handicap which I would be carrying from tomorrow. Lil returned home tomorrow morning. So for the last time I was relatively lightweight and making the climbing a little easier than it would be. Carrying on with my climb to Cnicht saw that the path I was following showed signs of feet before me. Not any footprints from today though. Not yet. I was still the only one here at this time of day which was now approaching ten in the morning. Looking ahead of me i could see the two mountains I would climb today in the same frame of picture. Cnicht and Moelwyn Mawr, sentinels either side of Cwm Croesor. 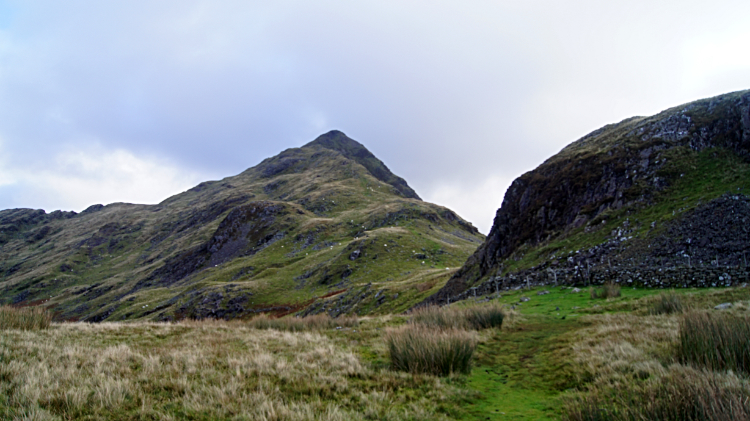 Closing in on the Matterhorn of Wales 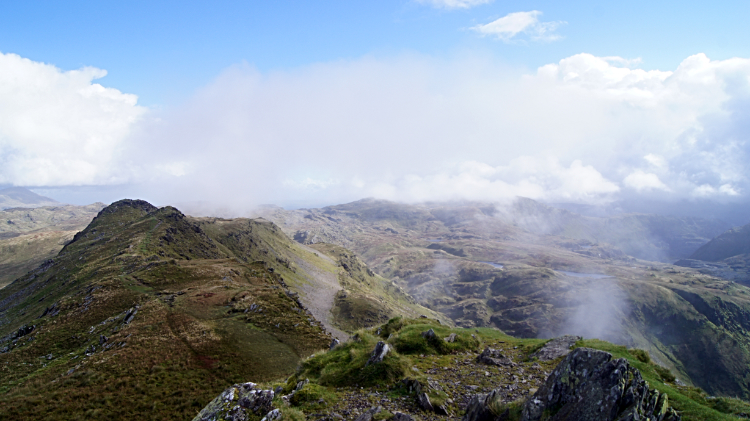 On the summit of Cnicht

The final half mile of climbing to Cnicht was the steepest and now, even with the reduced weight advantage, caused me to use hands as well as feet on some of the steeper parts on the approach up the south-west face of the mountain. It was fun to be clambering at height again and in a day of cloud coming and going, or mostly coming and staying, I was heartened to see blue sky above the clouds wisping across the top of the mountain. Looking across Cwm Croesor to Moelwyn Mawr I could see the same thing happening there. I knew it was a transient day though and anything could happen next. Still the glimpses of sun on my face while atop Cnicht were most appreciated. Even after the three splendid and unprecedented days of continuous sunshine in Snowdonia I had already experienced on this walk. 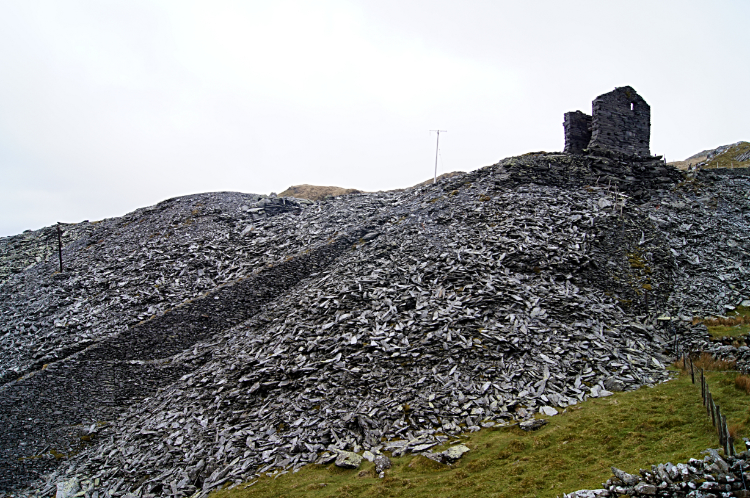 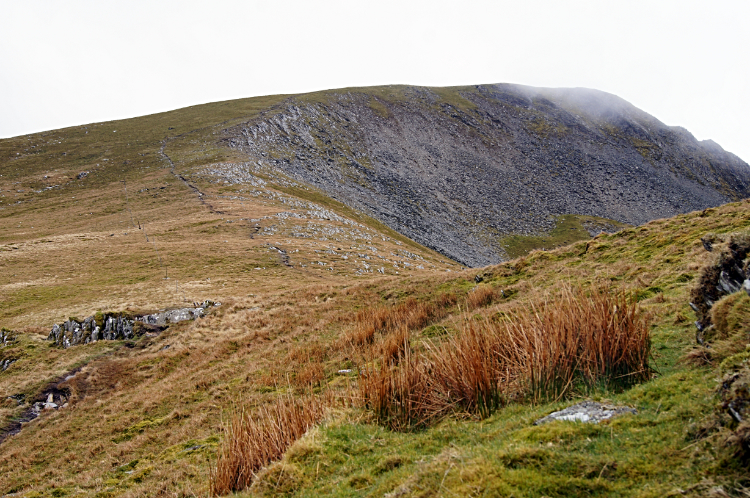 From Cnicht I headed down in the same north-east direction to Foel Boethwel, on the way spotting all the heaps of slate left from the numerous mining sites in this area. They were scattered here and there, once hives of activity but all eerily quiet now. From Foel Boethwel I turned onto the path leading south and bisecting a number of small upland tarns including Llyn Cwm-corsiog, Llyn Diffwys and Llyn Clogwyn-brith nearby where I walked through one of the redundant slate mining sites. Near Foel Ddu I walked through another larger site, a disused quarry and from there I changed from descent to ascent once more, this time to Moelwyn Mawr. Cloud still skimmed the top of the mountain but the attentive blue sky of earlier was gone from the scene now. The sky was as grey as the slate. 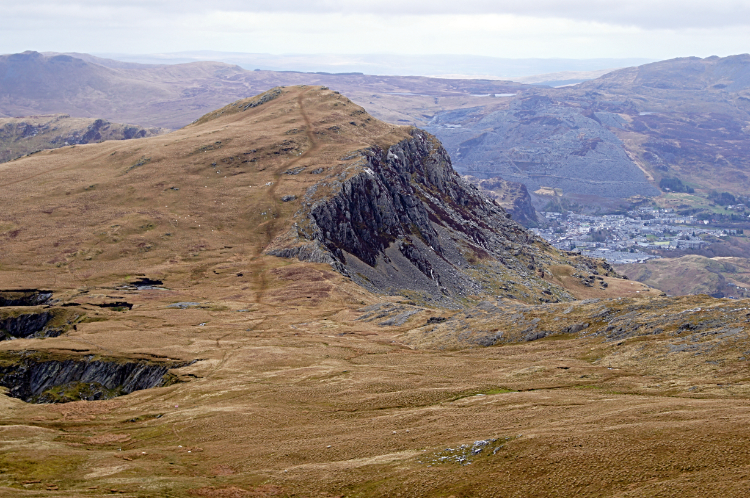 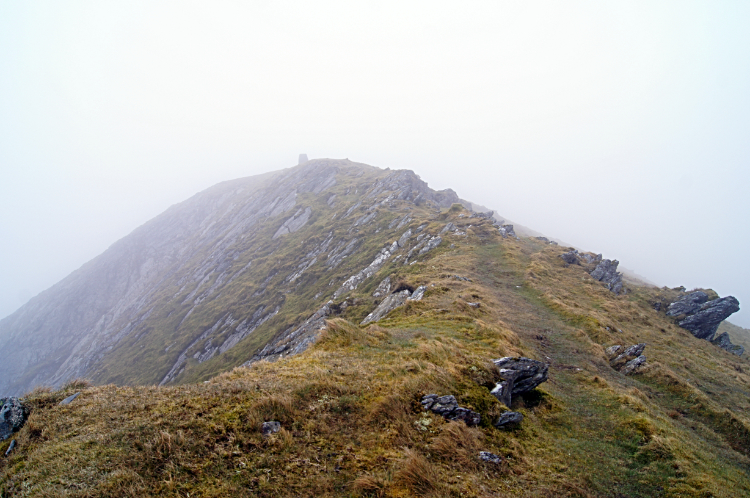 Foel Ddu is a magnificent sight on the climb from Rhosydd Quarry, yet another I passed on the way, to Moelwyn Mawr. Looking back to Foel Ddu and to Blaenau Ffestiniog which sits in the same frame as Foel Ddu's stark east facing steep cliff is an awesome sight. I was taken by the beauty of the shot, probably best seen in the grey scale of the moment. I stood looking at the view for a while, part in admiration and part in the forlorn hope of the nagging cloud clearing from the summit of Moelwyn Mawr. I gave up eventually, climbing into the cloud. Surely I realised I could not get across Snowdonia completely without a bit of whiteout. Anyway, almost effortlessly, I climbed to the highest point of my day, standing by the trig point on Moelwyn Mawr at the elevation of 770 meters. The cloud streamed across in waves. As it came I was enveloped and as it went I spotted my way ahead, south bound and downhill to the Vale of Ffestiniog. 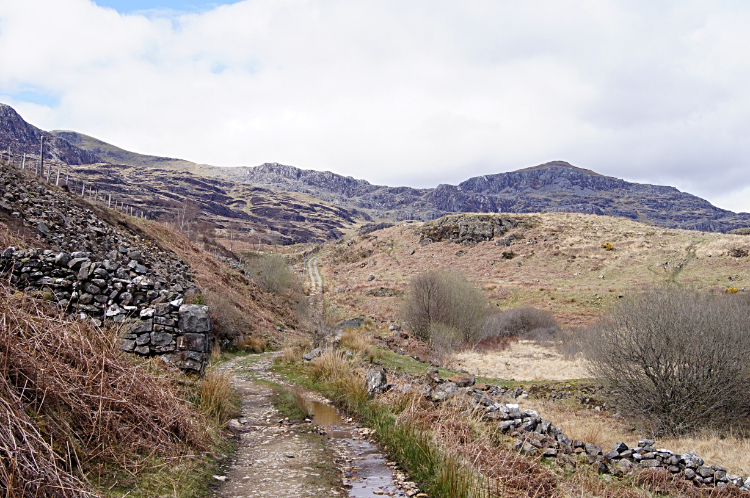 The path to Tantgrisiau Reservoir

Glimpses of sunshine breaking through the clouds gave me the imagination of spotlights in concert halls pointing out the best points of the performance. At one time as I climbed down the steep south side path from Moelwyn Mawr I had a great view of Llyn Stwlan and beyond the dam wall of the reservoir the spotlight was on Blaenau Ffestiniog once more. This proud place was not going to let me pass without showing itself in its best colours. The moment of seeing the town in the spotlight was quite mesmerising. From Llyn Stwlan I crossed more remote wild land on good paths and disused mining tracks towards Tantgrisiau Reservoir. It was all downhill in altitude now but not in fact. This remote walk in what felt like an abandoned land was so beautiful in the raw. I was smitten with it all, walking with complete abandon and with not a care in the world. I was where I wanted to be. 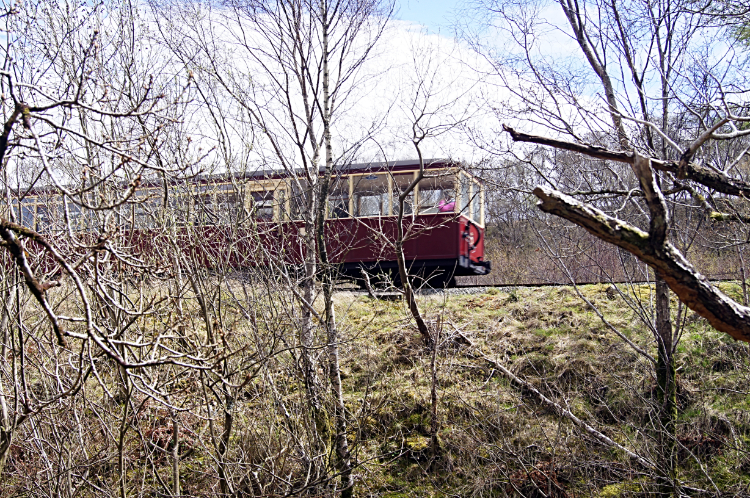 Train passing on the Ffestiniog Railway 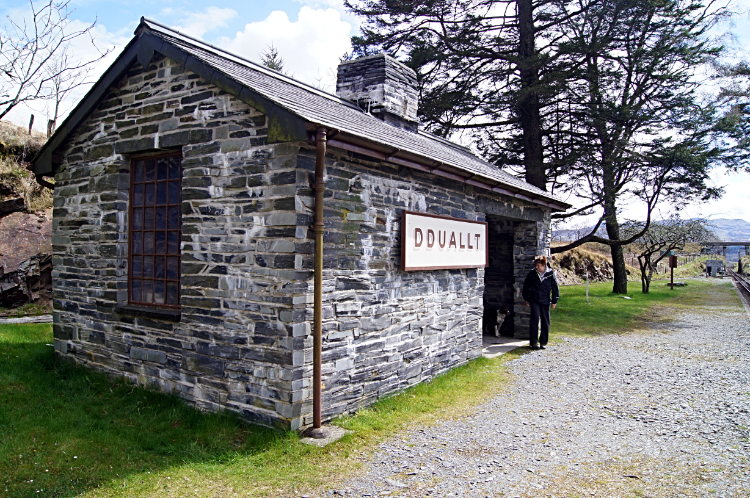 At Tantgrisiau Reservoir I reached the line. Not the end of it, more like the start of it. At least for me. I was now seeing the tracks of the Ffestiniog and Welsh Highland Railway for the very first time. I had read about this popular heritage line but had not seen it before. Until now. And it was not long before I saw the first train on the narrow-gauge heritage railway pass. I followed the line as it tracked south and then west for a mile to Dduallt railway station. Now there were other people in the vicinity. It is just that the rest were passengers on the railway while i was the only one on foot. I liked that fact. While the train goers were getting a fleeting glimpse of the lovely countryside beside the railway line I was getting a longer and more appreciative look. I could watch the birds hopping in and out of cover of gorse and other budding spring shrubs, no doubt checking out nesting sites. Those in the train missed that detail. 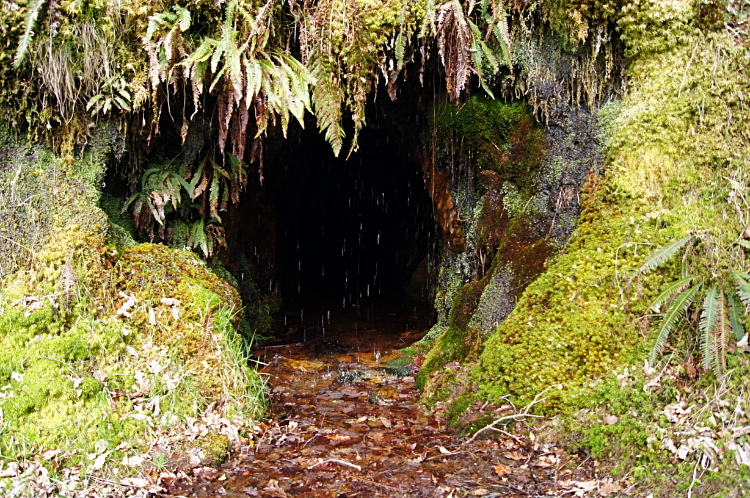 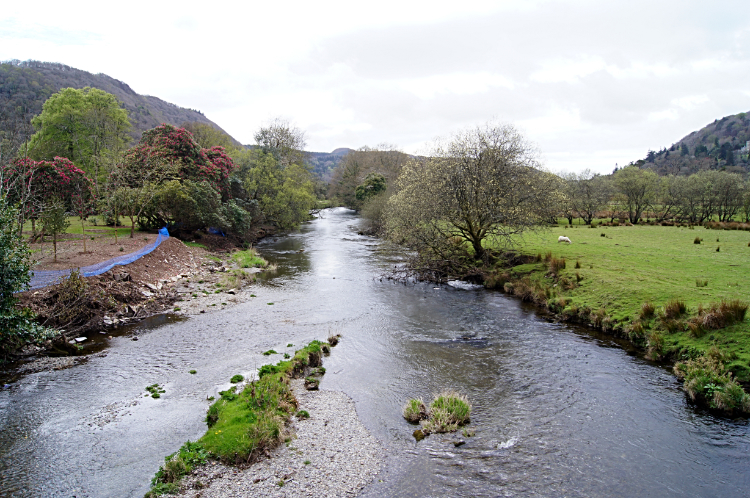 I enjoyed more delightful moments with flora and with fauna in the heart of my walk through Coedydd Maentwrog National Nature Reserve, a place of quiet and a place of beauty. Well noted for its liverworts and lichens I saw evidence of them in a small but remarkably beautiful mini cascade of trickling spots of water dripping off ferns and mosses into a crystal clear pool of water. It was like a scene from a fairy tale. Bigger and more dramatic waterfalls followed on the walk through the ancient woods of the reserve. It was a fitting finale to the fourth stage of my Wales Coast to Coast walk as beyond the woodland all that remained was a short walk along the A487 into the village of Maentwrog. I stood on the bridge overlooking Afon Dwyryd waiting for Lil to arrive and pick me up for the last time until Pontypool. That's a long way, another 200 miles or so yet.