Summary: Stage eleven is unique as being the longest of the eighteen stages which complement my Coast to Coast walk through Wales. The stage is over twenty two miles in length from Tregaron in Ceredigion to Rhandirmwyn in Carmarthenshire. The stage is unique in another factor; in that is walked entirely on tarmac roads. Despite following roads vehicular traffic is never a problem as the twenty two miles are travelled through a very remote and sparsely populated area of Wales. Furthermore, despite all the road walking throughout the stage many of the views are wonderful. This is because the walk is through the heart of the south Cambrian mountains. 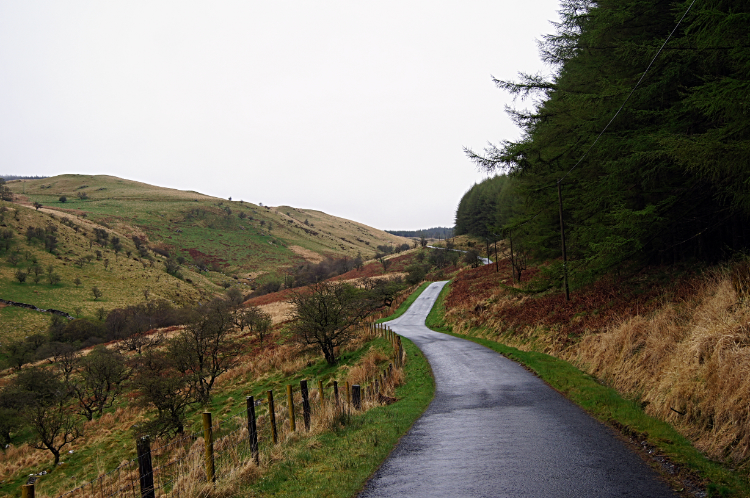 Climbing the road to Cwm Berwyn 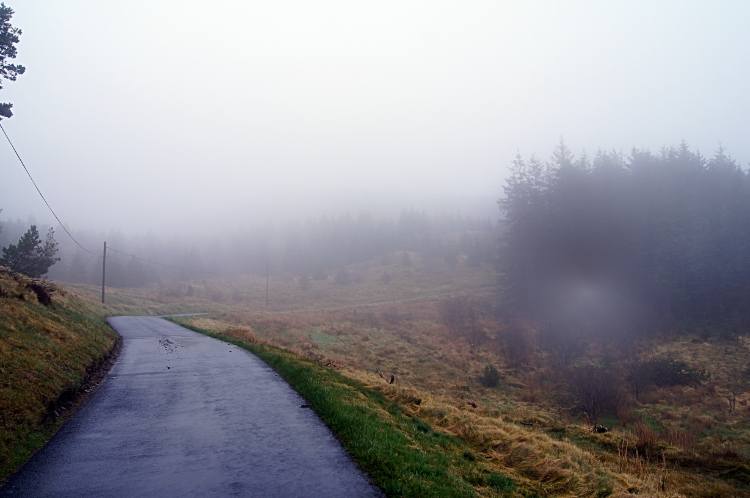 I set off on today's walk from Tregaron at 7.30 which meant I missed breakfast in the Y Talbot Hotel. I needed to make as early a start as possible. Tregaron was very quiet, only a few people about their business. The newsagents was the only shop open at such an early hour and sandwiches, pies ans the like were not on offer. So it was a crisps and chocolate day for me. Stocked up with the snacks and with soft drinks I followed the mountain road out of the town in an easterly direction up to Cwm Berwyn and in the direction of Llyn Brianne which was signposted at eighteen miles away. The sky was full of brooding clouds from the outset so I donned the wet gear straight away. Just as well as it was drizzling as I left the town and raining steadily within a mile of setting off. As I got higher the rain got heavier and heavier. Visibility worsened as I walked into the low cloud as I reached the large tree plantation at Cwm Berwyn. I was now two hours in to my long road walk and having covered over four miles while ascending almost 300 meters in the I felt I had suffered enough for now. So I sought shelter in the plantation of pine trees and sat down to have a picnic. A chocolate picnic bar! I can't describe how good it was. 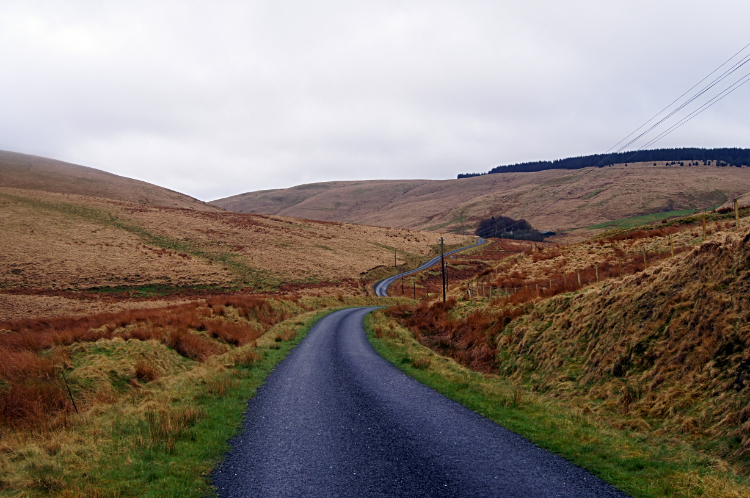 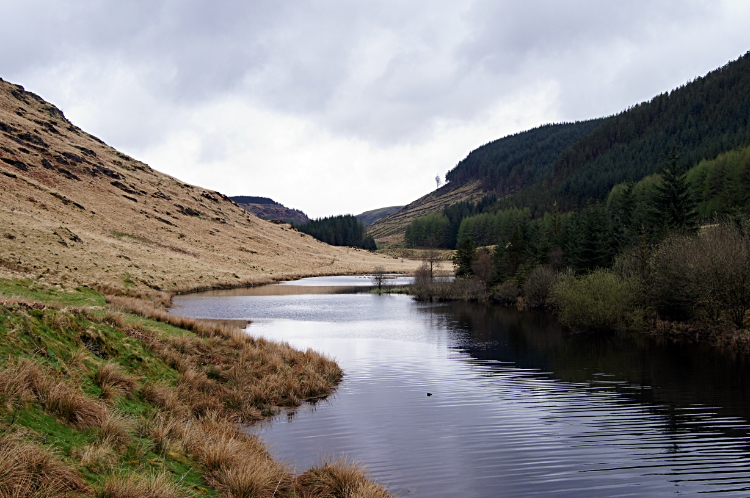 After my chocolate kick I resumed my walk, continuing on by road to the top of the pass just beyond the east edge of the plantation at Esgair Saeson. Now on to open moor the local Sheep often looked on at me with bewilderment as I passed them by. It seemed solo long distance walkers up here was a rare sight. On I continued from Esgair Saeson to cross a mass of converging streams at a dip in the road. These included Nant y Ffrwd, Nant y Cwr, Nant Tyhelyg, Nant yr Arian, Nant y Cwar, Nant Bryn-Glas and Nant Gruffydd. Some of these spilled into an upland tarn and continued on as a larger stream named Camddwr on the map. On I went tracking south a downstream with Camddwr. More streams filled Camddwr. Nant y Gronwen, Nant y Coeleth, Nant Maes-glas, Nant y Gaseg, Nant y Gerwyn, Nant y Graig, Nant Gruffydd (yes another one), Nant y Fran, Nant y Brithdir, Nant Ilwyd and finally Nant Rhytalog. During my walk alongside Camddwr the miles passed as I trudged on the verges by the roadside or on the road where there was no grass verge. About two and a half hours after passing Esgair Saeson I reached my highest point of the pass to Llyn Brianne and came to a road sign. Tregaron nine miles. Rhandirmwyn 14 miles. Blooming heck. Not even half way. No choice, soldier on. The weather continued to play its games with intermittent rain showers, some light, some heavy. At least the cloud had lifted a bit though and consequently the views I enjoyed on the walk equalised the downside of rainfall by being consistently stunning. High mountains, interlocking spurs, fast flowing streams, Cambrian stone outcrops jutting upwards at 45 degrees and more. Eventually I ended my walk of road surrounded by wild moor with shades of brown grasses by leaving the southbound course of Camddwr and climbing, skirting the south side of Bron-yr-Helm and walking to another stretch of forest. Here I saw my first human folk since leaving Tregaron. Workmen with big machines were moving felled timber on the hillside of Bron-yr-Helm. After passing them I descended to a larger body of water. I had reached the point at Hafdre where Afon Tywi flows into Llyn Brianne. 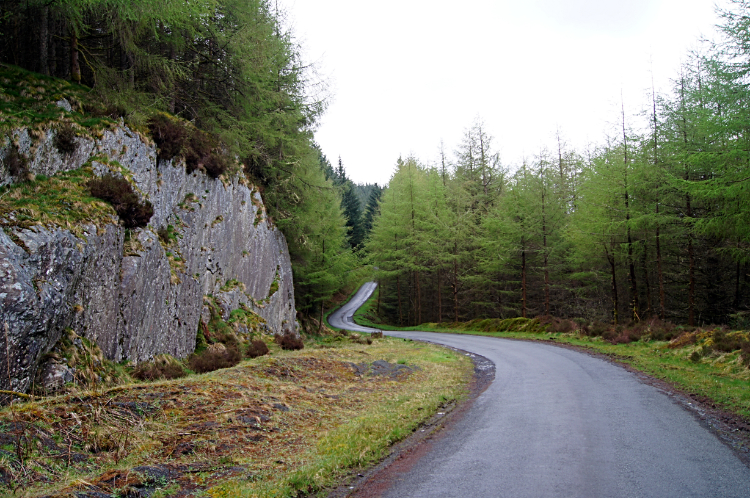 The road through Tywi Forest 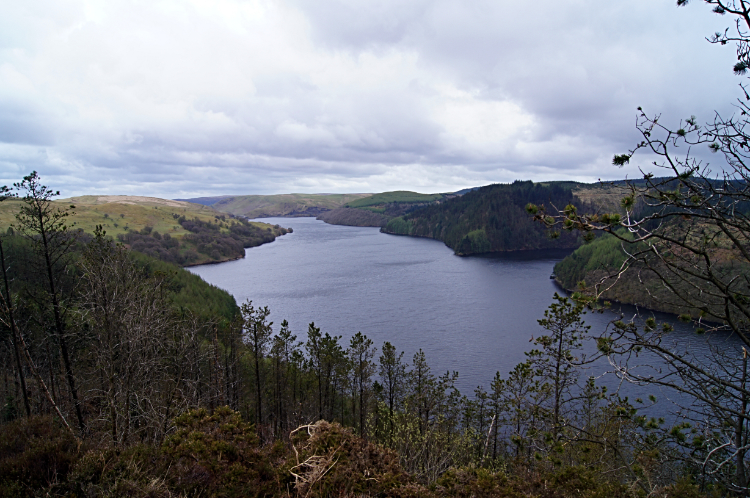 Not knowing it at the time I had met up with the longest river which flows entirely within Wales, all seventy five miles of it. I was just six miles south from the source of the the Twyi/ Towy now and over the next day and a half I would be seeing it again and again as I made my way to Llandovery. Indeed today I was with it all the way though much of it contained within the expansive waters of Llyn Brianne. Being beside the river and the inflow of Llyn Brianne was a moment of joy after five arduous hours of walking the roads and verges of this area but then I reached another road sign which dampened my rising spirits. The finger of the sign pointing back to Tregaron said I had covered eleven miles. I was still not half way today and despite the enjoyable scenery my ailing feet were telling me to slow down. Or at least to take a break and cool them. So I stopped for a while at the road bridge over the river and carried out running repairs. Boots off, socks off, Deep Freeze sprayed on. While in bare feet and motionless I watched Swallows or Sand Martins, I could not be bothered to make out which, skim the water and catch insects flitting just above the water line. I could have watched their aerial manoeuvres all day. I actually watched them for fifteen minutes. Back on my way it was into more forest and making my way from the north to the south of Llyn Brianne I went. 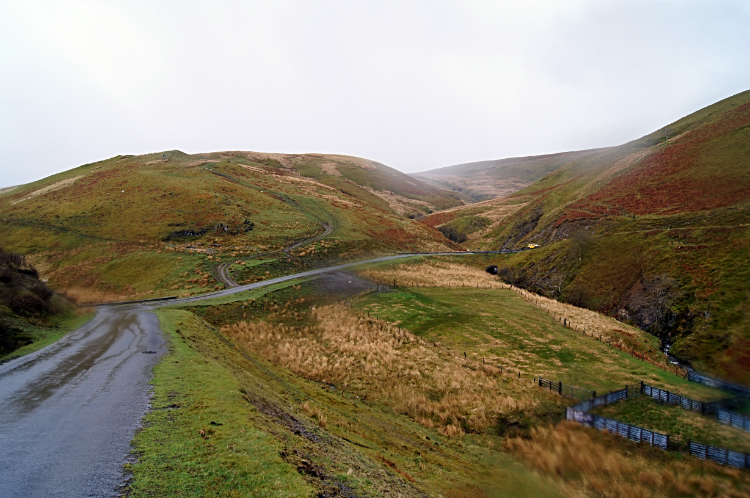 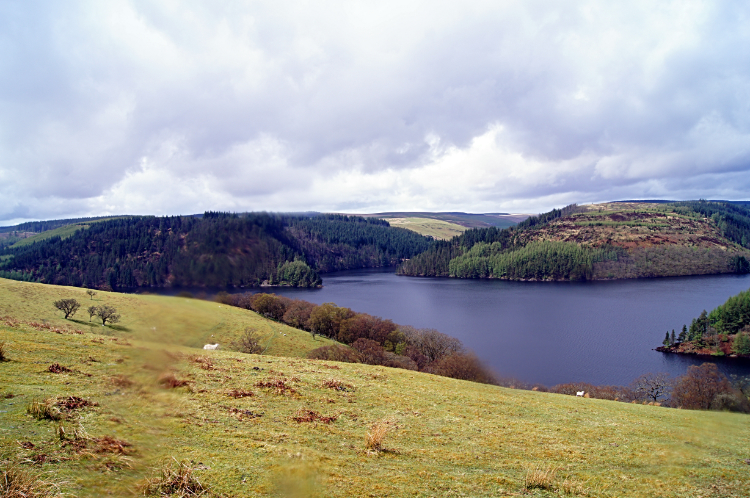 The walk from the northside to the dam on the south side of Llyn Brianne seemed like a walk which took forever. Kinks and curves on the map showed it to be a meandering course and never flat with a series of climb ups and come downs on switchback roads to hillsides and stream cuttings feeding Llyn Brianne from the east. What is more, while I walked the reservoir roads the weather was really deteriorating. I was now getting glimpses of sunshine which promised better conditions but then rain would intervene again. Accompanied by brisk cooling winds. On a couple of occasions the precipitation coming down from the angry sky was not rain but instead it was hail. Some of it vicious with pea sized ice hailstones shattering on hitting the hard road surface. Those that hit me did hurt. Halfway around I ducked in to tree cover from one attack of hail and stopped for lunch. I was in need of the break, fourteen miles in to my walk with a little over eight miles to go. I took twenty minutes out over lunch and enjoyed the time resting. I sat and thought "The scenery through the woodland to the lake and to the rolling hills is well worth the effort I am making and pain I am taking". I did not wish to be anywhere else. 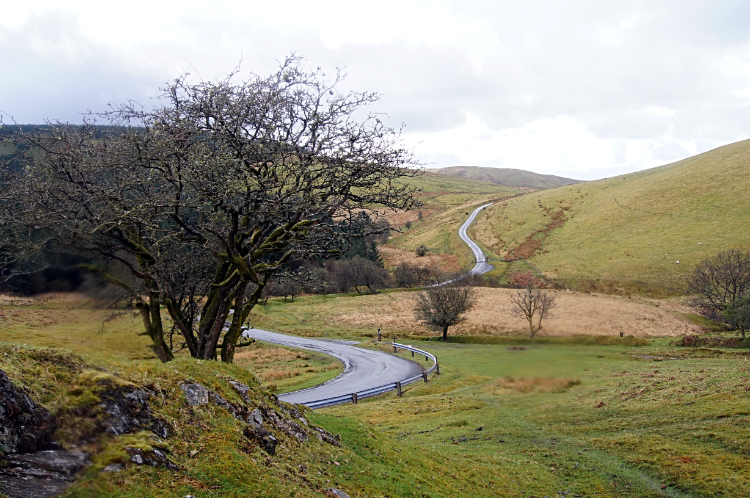 View of the road travelled at Trawsnant 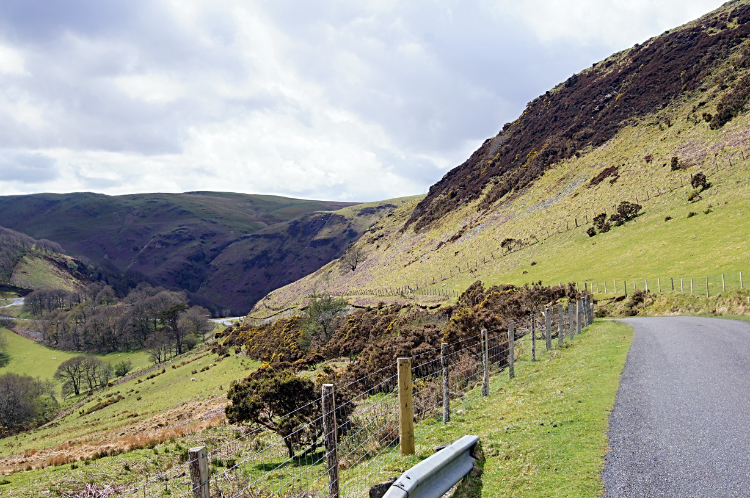 Downhill to the Towy valley

Back to the walk. My head was permanently down and facing the ground when the hailstones returned. Which they did for the time I hit the halfway point of the walk of Llyn Brianne. I was not in a good mood and with the worse of the weather came the worse of the pain which had resurfaced in my left foot. The heel of my left foot was now sharing the want of sympathy with the blister I was tending and caring for on the underside of the same foot. I was slowly walking and close to limping. Yet I was not giving in on my Coast to Coast walk. And it was here and now that I could have. While walking the darn winding roads around Llyn Brianne a couple of sightseeing motorists pulled up beside me and asked if I wanted a lift. I said "No thank you. I am tempted but it is strictly against the rules of the long distance walk I am doing. I would never live with myself if I gave up now. Thank you so much for the offer though". Despite the arduous effort of getting to Rhandirmwyn there was no way I was stopping. 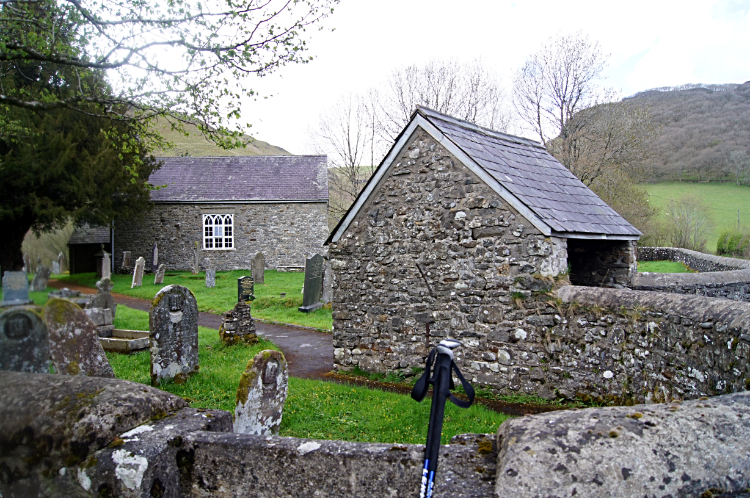 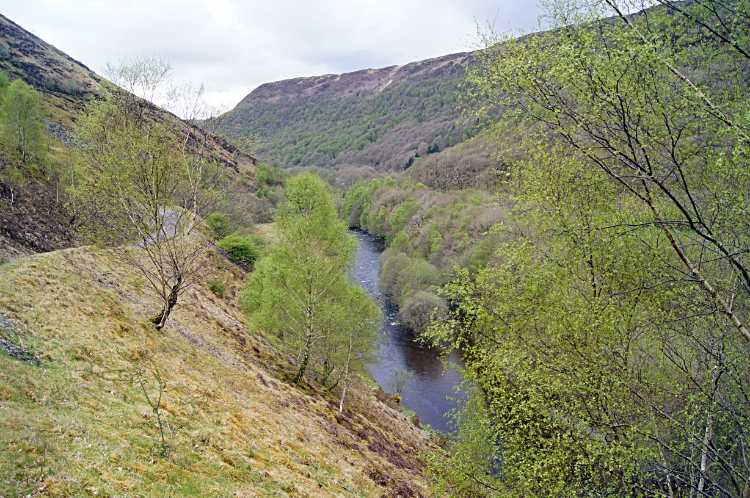 Not too long after the chat with the caring motorists I had the seven long miles of walking by Llyn Brianne behind me. A crow could have completed the same mission in three and a half miles. Oh well, it is done now anyway. And from the dam side of Llyn Brianne it was downhill all the way to Rhandirmwyn. A long downhill of four and a half miles while losing two hundred meters of altitude. Once more I met a motorist who also stopped to ask me if I needed a lift. This time it was a gentleman from Llandovery who said he was an exile from Cardiff. On chatting he asked where I came from. When I says Yorkshire he said "I have a lady friend in Otley who has taken up fell running, at 50 years old". I love the random conversations I have with strangers I meet on my walks. Carrying on down into the Towy valley I arrived by a remote roadside church. St Paulinus' Church at Ystradffin which is no more than a dispersed scattering of farmsteads was the ideal place to stop for a last break of the day. I sat down in the shelter of churchyard entry porch to enjoy my last chocolate bar and some more drink. From the church I continued on down the road and now I enjoyed a great view of Afon Tywi cutting through the gorge below me to my right. 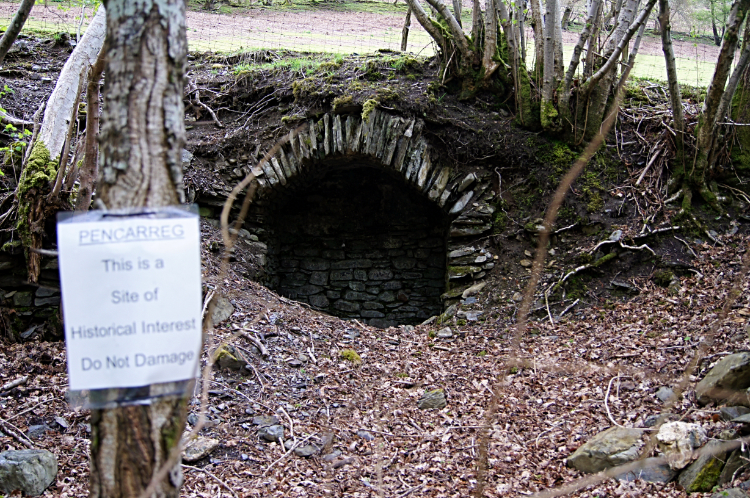 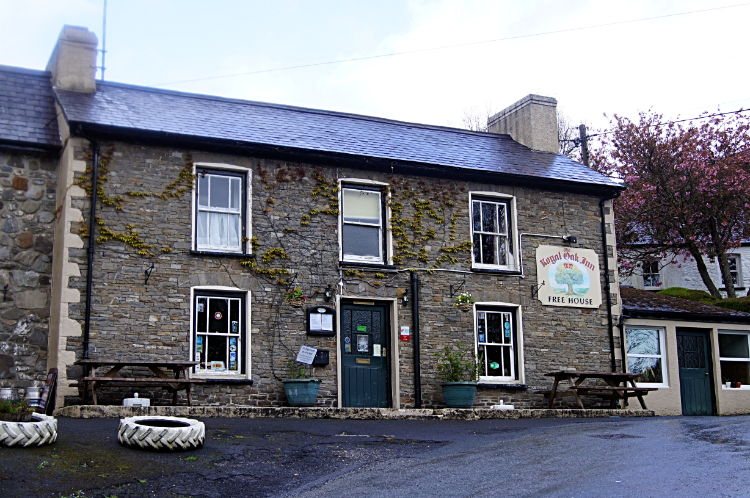 I could feel I was nearing my base for tonight now. More and more evidence of life. Farmsteads at Gallt-y-bere where the site of an ancient burial chamber is marked. More buildings at Broncwrt and a mill at Nant-y-Bai. Then I came to what seemed to be disused kilns at the side of the road. A paper sign was attached on a post at the site saying 'Pencarreg site of historical interest'. Then around the next corner, ten hours and 23 miles after setting off from Tregaron, I limped into the Royal Oak at Rhandirmwyn. What a thrill it was. Retiring to my room for a rest I had a couple of hours to chill before getting ready for dinner. The pub was busy in the evening but with table secured earlier I enjoyed a wonderful meal in the company of a couple of very friendly locals also enjoying a night out dinner. We chatted, joked and laughed and during all that fun my aches went. Today had been hard but by gum it had been fun.

From my Facebook post on arrival at the Royal Oak: "I have just arrived in Rhandirmwyn after 23 hard miles over the Cambrian Mountains. I got rain, hailstones, gales and the proverbial kitchen sink throw at me but the weather did relent on a few occasions. When it did the views were amazing - this really is undiscovered walking country. Talk more later, I need a bath."