Summary: The grand finale to my Wales Coast to Coast which began in Conwy Bay almost three weeks ago. Magnificent Snowdonia, the magical wild country of mid Wales, the Cambrian Mountains and the Brecon Beacons are all treasured banked memories as I walk through forest to Castell Coch and then along the Taff Trail to Cardiff Bay. Time to reminisce on how special my walk through Wales has been while enjoying the sights of Wales capital city. Including Hailey Park, Blackweir, Bute Park, Cardiff Castle, the Millennium Stadium and the National, Assembly Building. And the finale; seeing granddaughter Molly waiting for me. After all, I have dedicated my personal Wales Coast to Coast to her. This is 'Molly's Walk'. 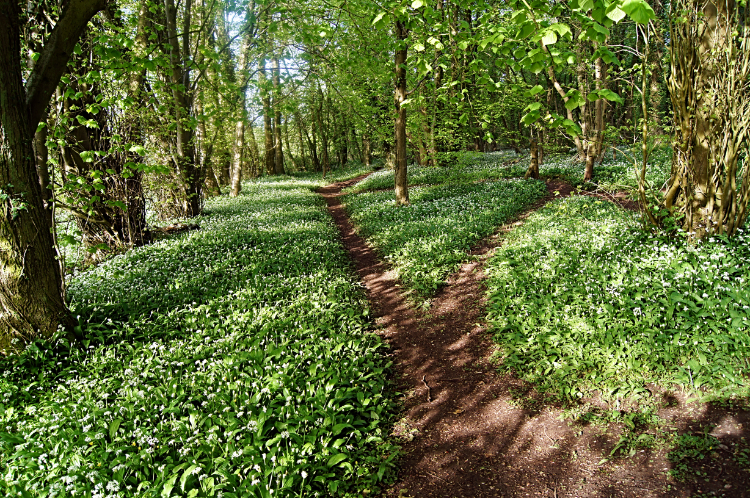 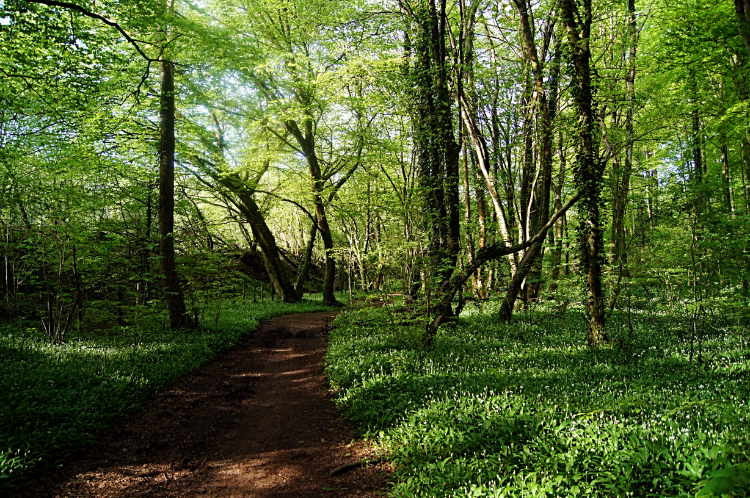 The finale to my walk through Wales started in much the same vein as yesterday's ended. By walking through gorgeous woodland in springtime. The sun was shining and the day set fair for the final stage of eighteen which helped the sweet and pungent aroma of flowering Wild Garlic fill the air. The trees in the forests were full of fresh green leaf and the Bluebells were out in their resplendent colourful flower. It was simply superb walking through first Fforestganol and then after crossing a road Fforest-fawr. The walk was enchanting, quite fairy tale which was most appropriate because at the end of my woodland walk I arrived at a fairy tale scene. 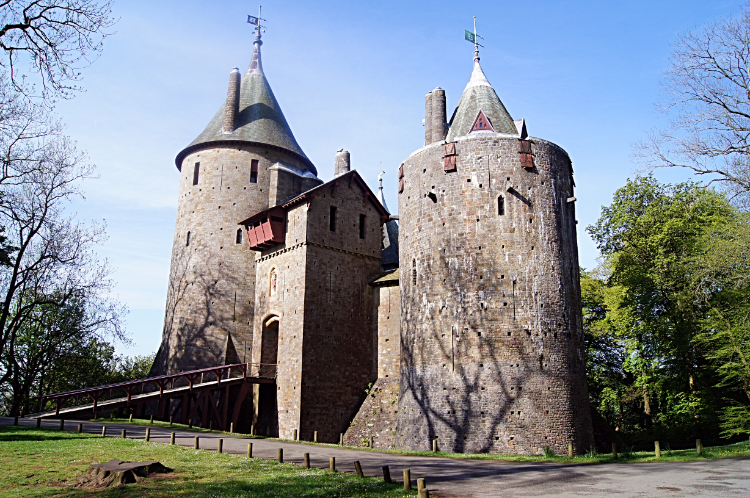 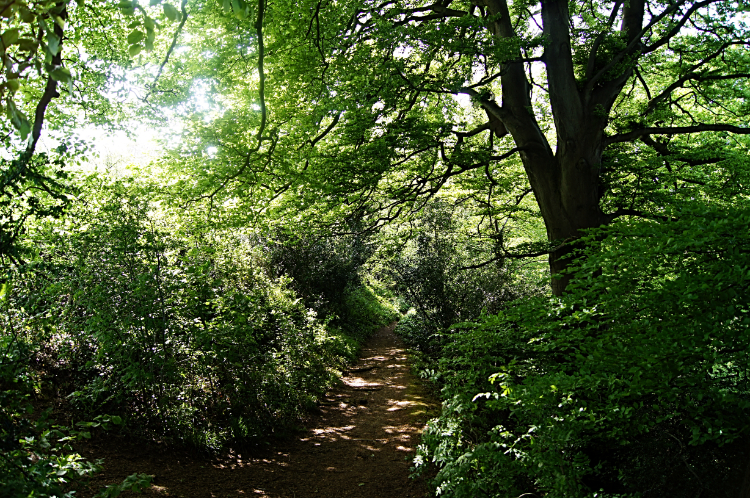 Castell Coch is a feast for the eyes. Translated in Welsh as the Red Castle it is is a 19th-century Gothic Revival castle and 100% fairytale. I could easily imagine the maiden Rapunzel flinging down for long hair from the highest castle windows and beseeching a gallant knight to rescue her. It is that kind of scene. The castle, more European château than English fortification, is a very popular attraction in Cardiff. No wonder. After walking all the way around the castle, no time to stay and visit this time, I connected with the Taff Trail which would now lead me all the way to my finish in Cardiff Bay. Thus I made my way down Castle Road and then Mill Road to cross the A4054 Merthyr Road and then head down Iron Bridge Road and under-passing the A470 to reach the River Taff. 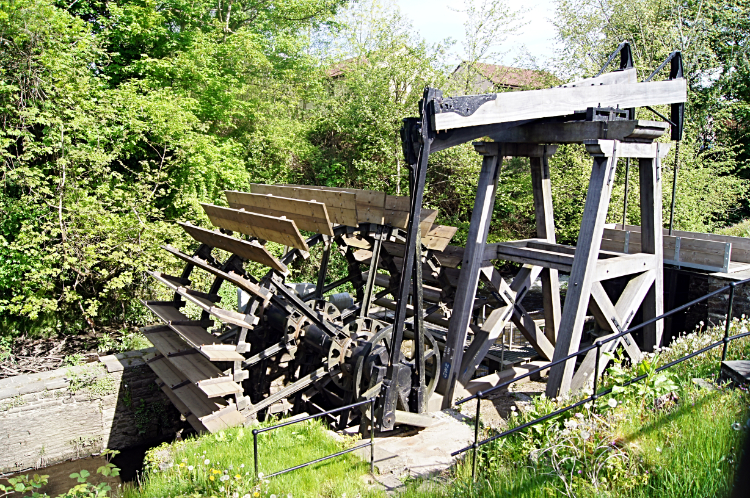 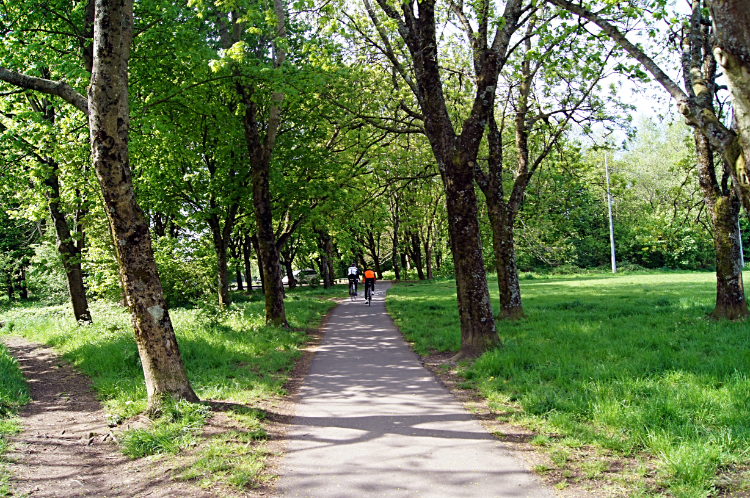 Not long after connecting with the river I arrived at a piece of industrial heritage which was used to maintain a factory which was the largest tin-plate works in the world by the end of the 18th century. Melingriffith Water Pump is a scheduled monument and has been restored twice since it ceased operation in the 1940s. It is an impressive sight. From the fine example of early industrial workmanship I continued on my way heading south along the Taff Trail passing by some riverside streets in the Cardiff suburb of Whitechapel and then arriving in Hailey Park. My walk all by myself now came to an end. I was still solo of course but park goers were all around. There were some individual walkers and some small groups walking. One young lady zoomed silently past me on roller blades and some lads and lasses cycled by too. It was a lovely Saturday morning after all. Halfway through the park I saw a large group of walkers on the far side. hey were being led by someone dressed as a Duck. 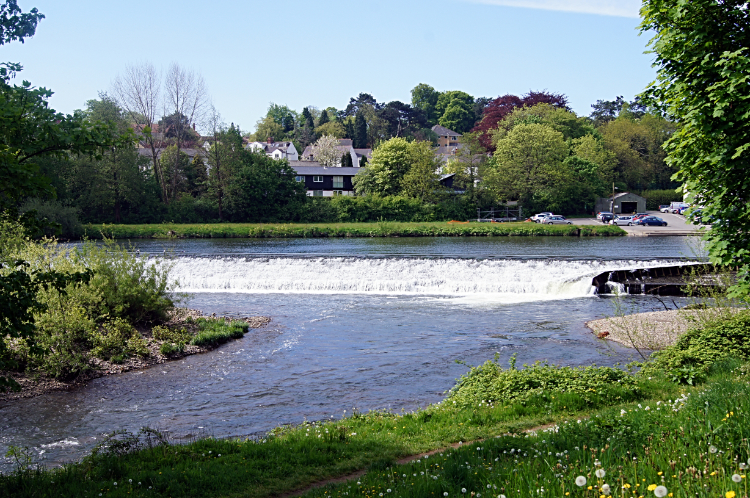 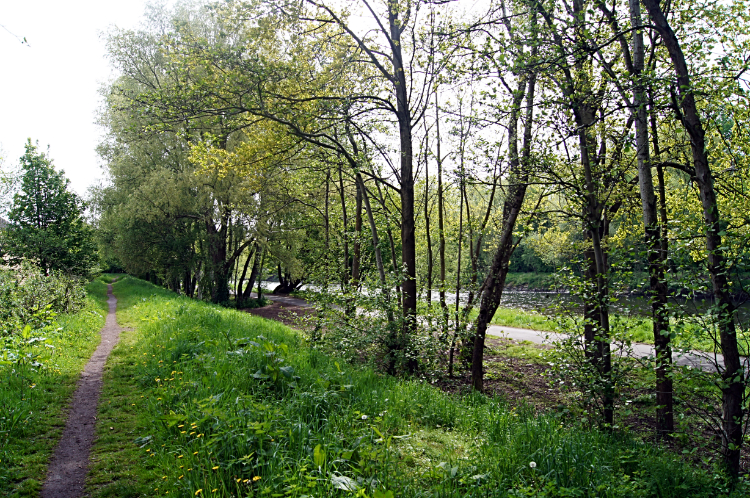 On the Taff Trail at Blackweir

Continuing on from Hailey Park I stayed by the riverside and took a five minute break watching the waters of the Taff tumble over Llandaff Weir. Next up on my way I passed by Llandaff Cathedral which I viewed on the far side of the river and then I reached proper city life. A superstore. Something captured my interest at the site of the Tesco Express car park. Not a shopper. Nor a car. But a Wren which was hopping too and fro on wooden stakes on the edge of coppice shielding the river from the store. The cheeky bird entertained me for a couple of minutes. On I went along the pretty avenue riverside Taff Trail past the suburbs of Gabalfa and Blackweir. Without noticing them. 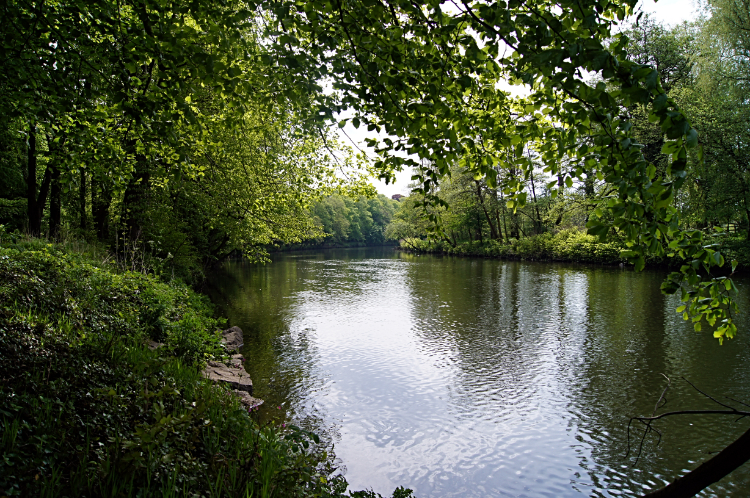 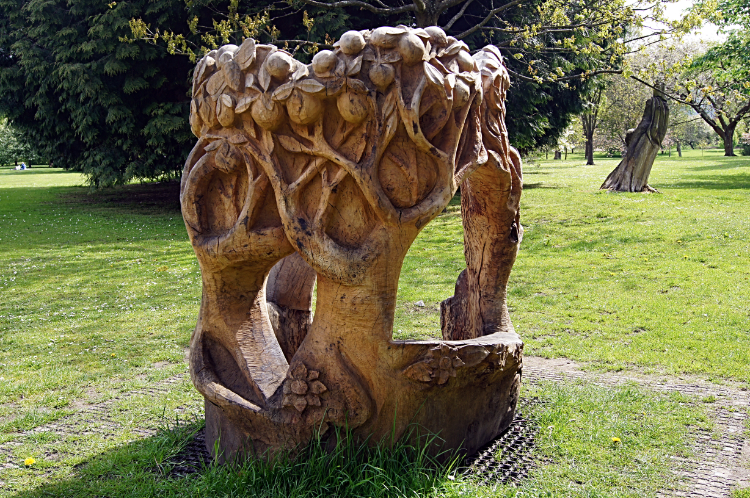 Seven miles into my walk and with just three of my 250 mile walk remaining I arrived in Bute Park. Beyond the park was the city center but before I hastened my conclusion to my Wales epic I took time out to enjoy the park. The preceding woodland had been another glory of Wild Garlic, spring green leaf and Bluebell flourish. Now in the park I enjoyed looking around at some impressive wood sculptures. One of the first I looked at was of a fruit tree, I think an Orange. Another was of a Medieval Knight in Armour sat astride an Eagle. 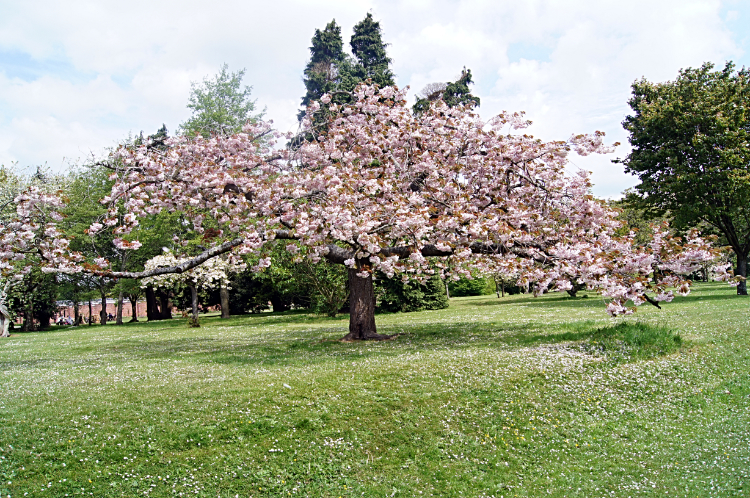 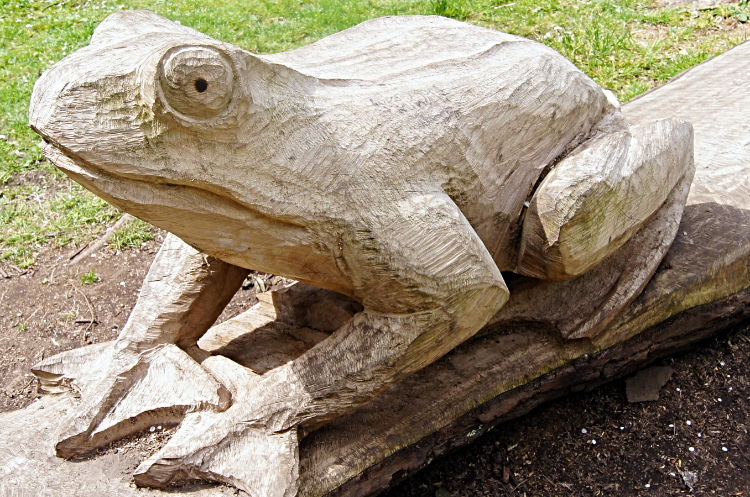 There were groves of Cherry Trees within the large grass areas of Bute Park too. Sadly some were dead but those living were in their finest clothes. A full Spring flourish of whites, pinks and light reds. Arrays of Limes, Acers and Firs provided a lovely display of splendid variegated colours too. Each complementing the other. There were more wood sculptures too. A bench resembling a Dragon or Snake. And what I called the Cardiff Frog. Two family groups were sitting, resting and playing around a mock stone circle. The scenes I witnessed in Bute Park were all a pleasure. Yet more wood sculptures. A ring of fish being chased by an Otter in an eternal chase. A bunch of flowers on an old tree trunk. I left Bute Park a happy soul. 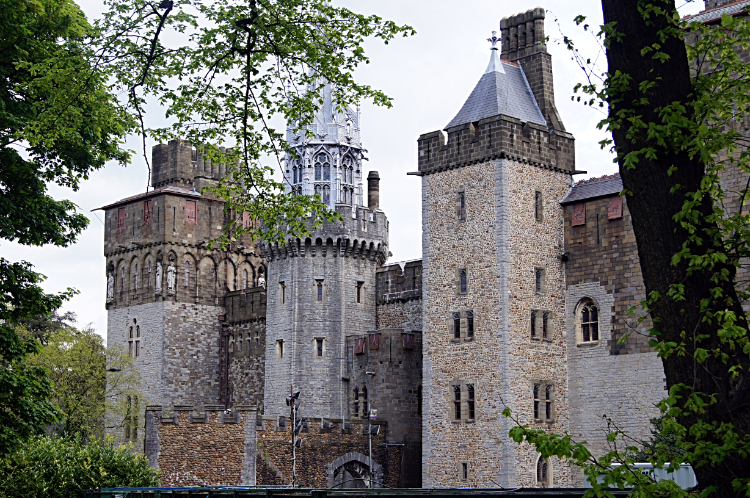 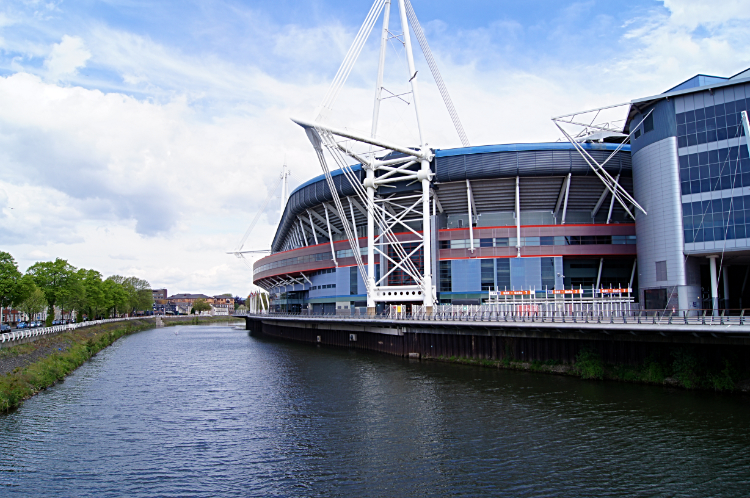 From the park I arrived outside Cardiff Castle. Impressive from the outside which is towers, bastions and turrets I did not have the time to go in and see the original Norman Motte and Bailey. Another time. I banked it. For now I continued on beside the river to reach Cardiff Arms Park and the Millennium Stadium. All quiet as I passed I imagined what it would be like during a Six Nations Rugby Union match. Full of national passion. I have to admit the Welsh 'Men of Harlech' Anthem gets the hairs on the back of my neck standing every time a rugby crowd sing it. The Welsh anthem is the best. They win that contest easily for me. From the site of passion and spectacle I crossed from east side to west side of the Taff by crossing Wood Street Bridge which led me alongside Grangetown to a crossing of the Taff, back to the east side by way of Clarence Road Bridge to reach Cardiff Bay. 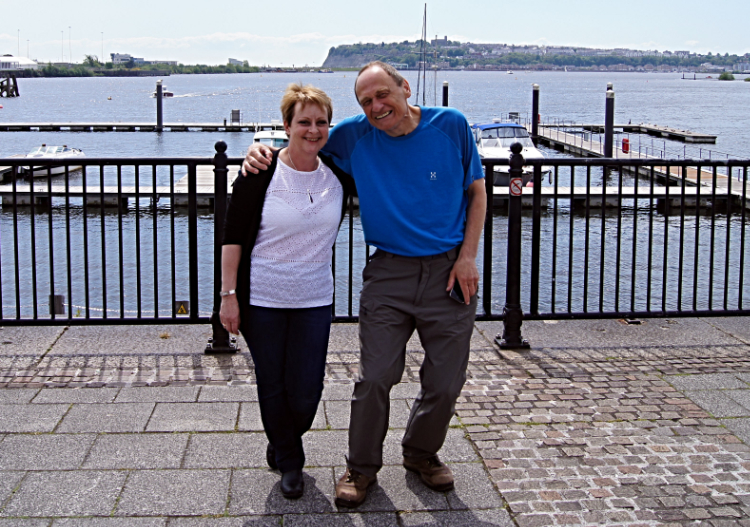 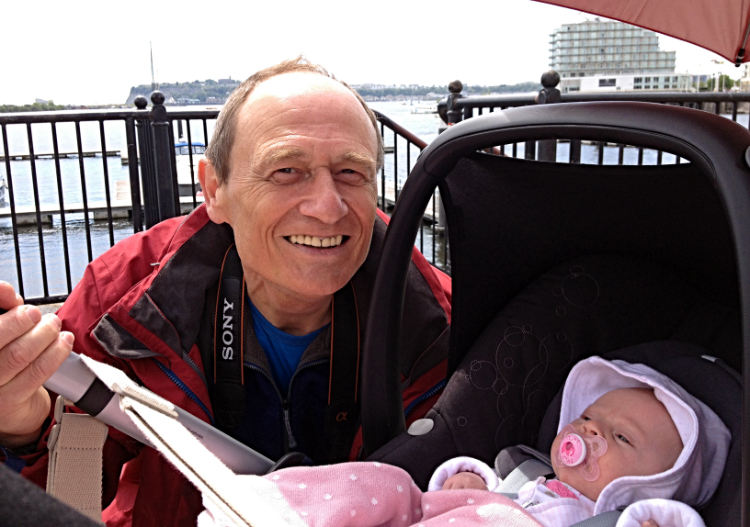 Celebrating Molly's Walk with the star of the show

And there I was. Standing on the footpath overlooking Cardiff Bay with 'Molly's Walk' all done. All I had to do now was find the family. Wife Lil. Proud parents Chris and Emily. And of course the VIP (very important person). I soon found the adults and there she was. The center of my immediate attention. Molly Hayes, the subject of 'Molly's Walk'. It had been the most thrilling journey. Two hundred and forty eight miles. over 17,000 meters climbed. Twice the height of Mount Everest. I was chuffed.

Until the next time.