Summary: This is one of the most popular walks in Calderdale. The reason for its renown is the Stoodley Pike Monument. The monument can be seen for miles in the Upper Calderdale area. It stands 100 feet tall, which is much higher than most hillside monuments. I can't think of one in Yorkshire which comes close. The existing monument is the second to be erected as the first one fell to the ground in 1854, forty years after it was built to commemorate the defeat of Napoleon's armies at the Battle of Leipzig. The people of Calderdale must have been pleased about Napoleon's reversal for the first monument was paid for entirely by public subscription. The monument stands tall and proud today, a tribute to the people of this historic valley. The walk takes us up to the monument on Stoodley Pike from Hebden Bridge. After climbing from the valley floor along tracks, through fields and over moor the return is made by much the same way except for the final three miles which is enjoyed along the towpath of the Rochdale Canal. 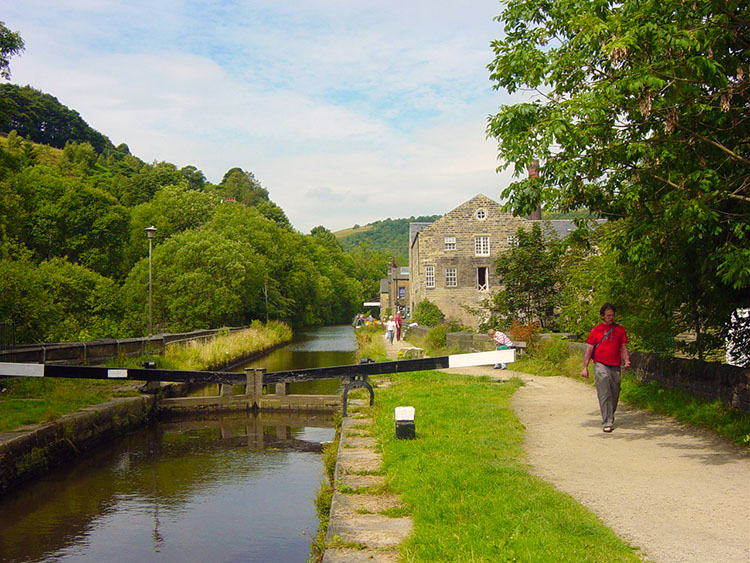 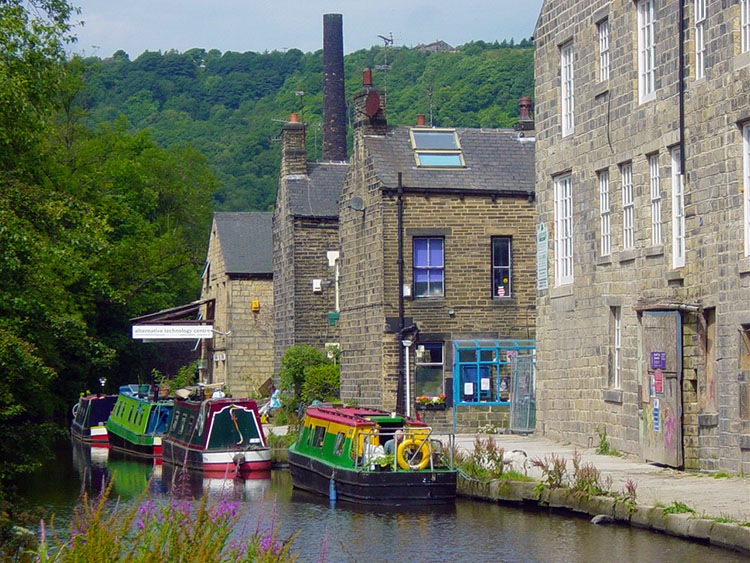 The Stoodley Pike monument first came into view as I drove onto the moor between Keighley and Hebden Bridge. It instantly drew my eyes to it. I surveyed it and the land around that I was soon to walk around while keeping my eyes on the moor road. I was immediately thrilled at the prospect of walking up to the monument for this was my first walking adventure in Calderdale and I was starting with a classic. Stoodley Pike stands tall and draws me ever closer. As I dropped off the moor through Pecket Well and down into Hebden Bridge I lost sight of the monument. No worries, I knew I would be seeing it up close before the day was done. Hebden Bridge is a popular town, the most visited of all in Calderdale as people are drawn to the shops, cafes and pubs but most of all to the Rochdale Canal which passes through on its course to Halifax. This usually causes problems for parking but luckily I found a spot in the small town centre car park straight away. 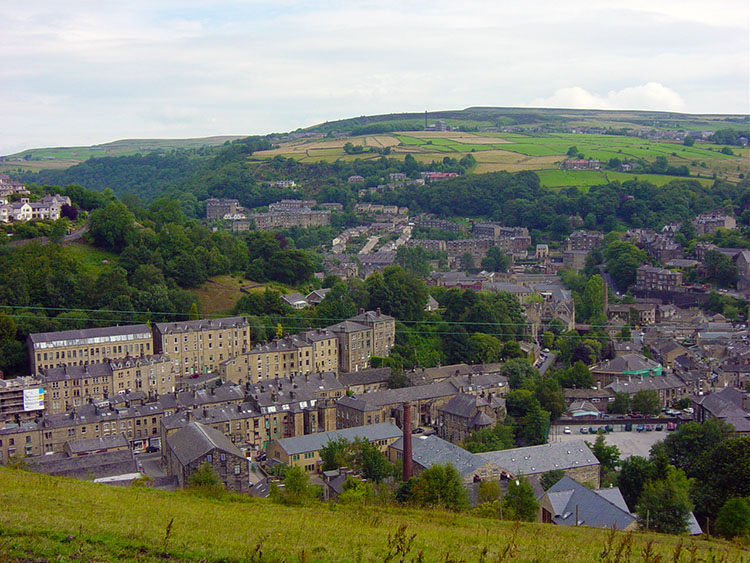 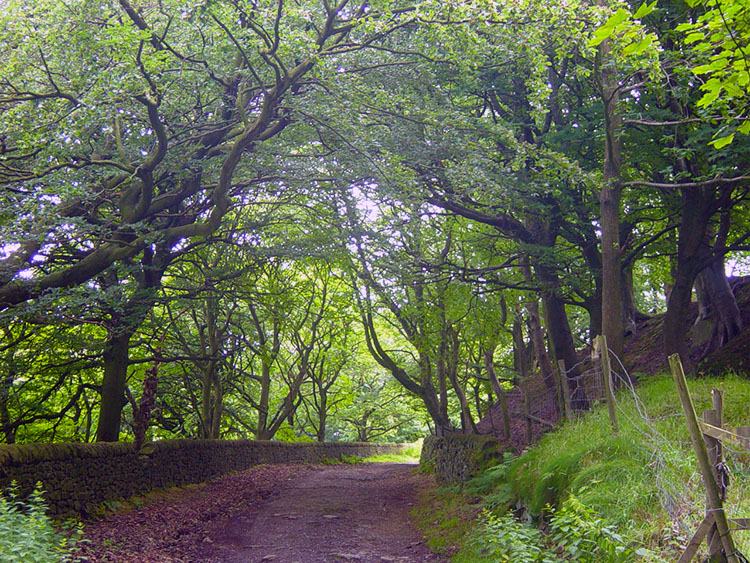 I began my journey to Stoodley Pike Monument by walking from the Tourist Information Centre to the canal towpath which I followed briefly until I crossed over a footbridge. Near it was a gate leading onto a road which took me up a zigzagging road (they all meander up these steep valley sides) until I left it to follow a track through woodland at Hebble End to emerge on a road near to a communications mast. It was a tough steep start to the walk and I was puffed out when I reached the mast. I had been walking for less than half an hour yet I had gained more than half of the height I needed to and I knew it! I left the track at the mast to follow a straight line over fields and bridleways. I was now on Pinnacle Lane and after another short sharp pull up the lane the monument came into view. 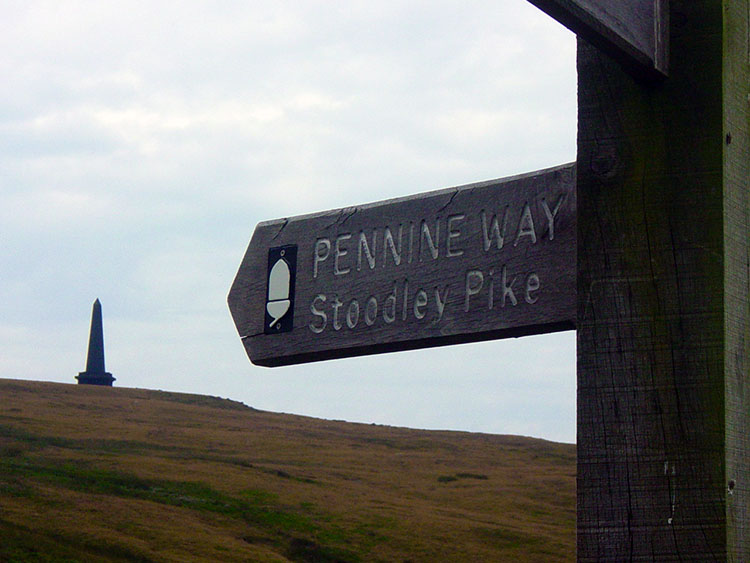 The way to Stoodley Pike 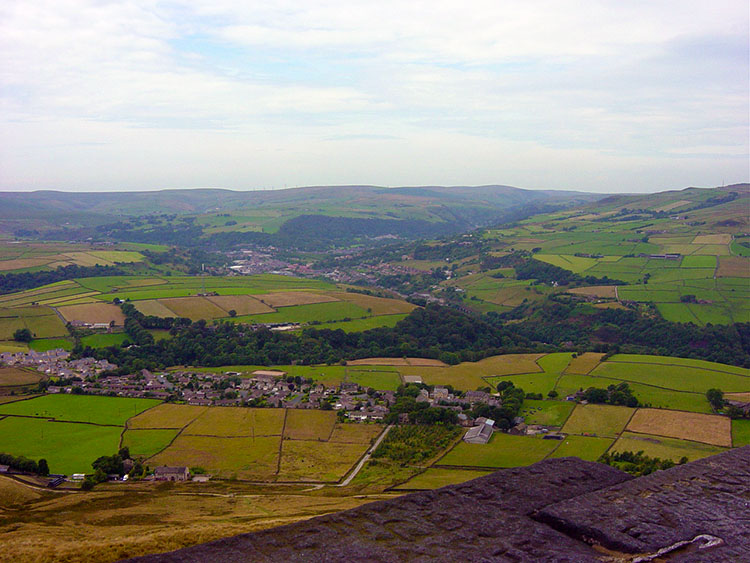 The view to Calder Vale from Stoodley Pike

I followed Pinnacle Lane towards the monument and often looked right down into the valley. To my immediate right I focused on the village of Heptonstall for this spooky village sits high above Hebden Bridge on a hill with steep cliffs on one side and a sharp drop on the other. There is only one way to reach it and the unique setting has given the place a witches and warlocks reputation. I can see why. After gazing on it some more I resumed my thoughts on the task ahead and continued my now steady level walk on Pinnacle Lane towards Stoodley Pike. After over a mile of pleasant walking the lane came to an end at Kershaw Farm. The farmers were haymaking. I now joined a stone track. This took me on a short course adjacent to the direct route before I turned right. After some more track walking I passed a building called Swillington and then started my final climb up onto the Pike. I had now joined the Pennine Way and this took me all the way to the monument. Only as I made my final approach could I appreciate the size of it. It is huge, standing at 100 feet tall with a square base of around 30 feet each side. 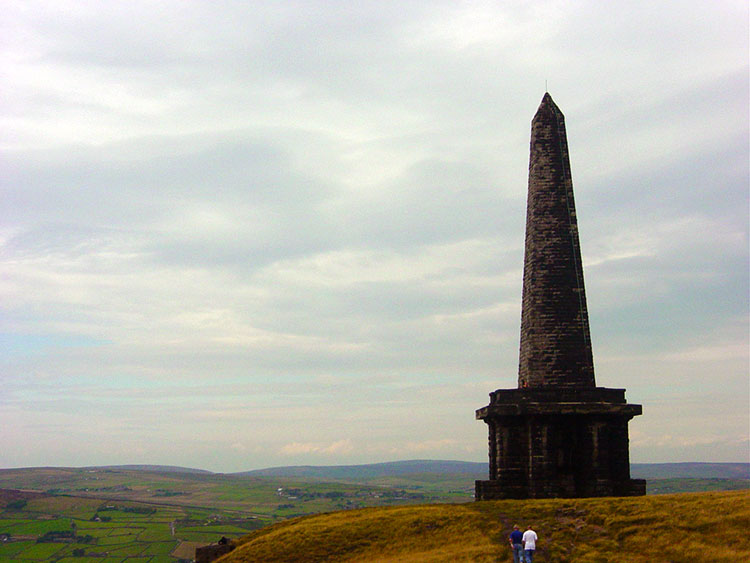 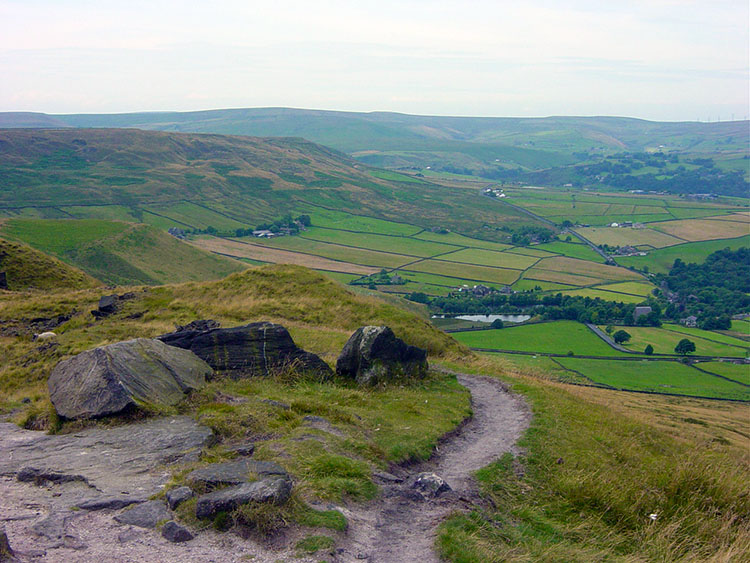 Following the path to Lumbutts from Stoodley Pike

Stoodley Pike monument is sturdily built with local grit stone and the pinnacle itself rests on the square structure that must be 25 feet high. In one of the sides of the base is an open doorway. This leads to a spiral stairway which I climbed. It took me up 39 steps and led me out onto a gantry that went all the way around the structure. The views from the gantry into Calderdale were spectacular and I surveyed the land around from all sides. I had not been on a hillside monument like it before, not one on this grand scale. I felt reluctant to leave it. I did so but stayed in it's presence as I enjoyed lunch. It was a fantastic place to take a break.Too soon I had finished my lunch and moved off. I kept looking back as I walked away from Stoodley Pike along the Pennine Way towards Withens Gate. This section of the walk was a delightful short level interlude at height. I reached Withens Gate all too soon and began my steep drop back into Calderdale. I lost height by heading down to a small reservoir I had gazed upon from back at the monument during lunch. I passed the Heeley Dam reservoir and walked into the small village of Lumbutts. 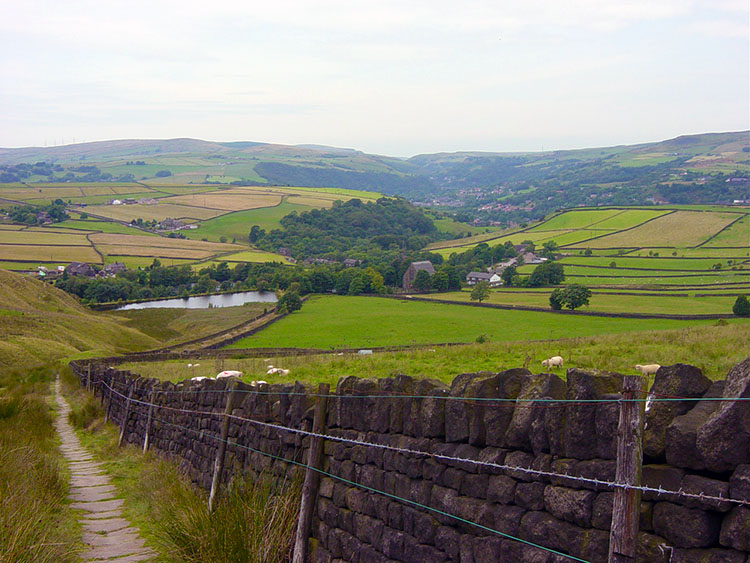 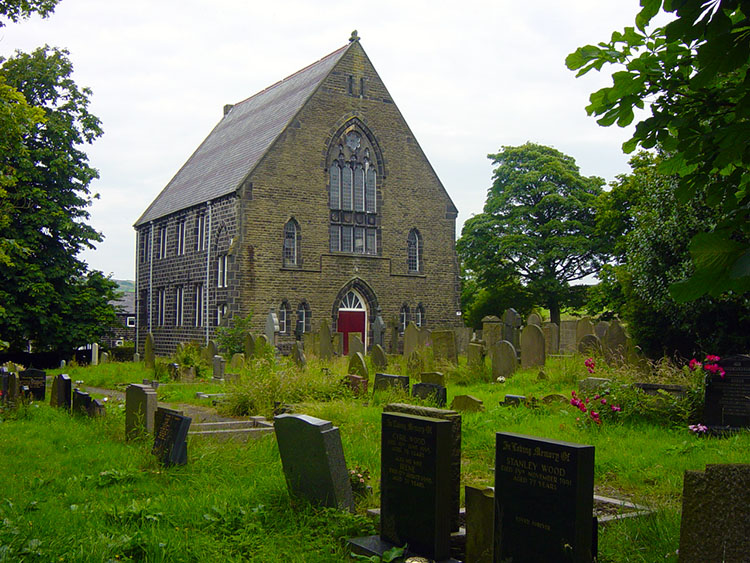 After walking through the lovely little village which included a lovely church, mill house and cottages, all with spectacularly kept gardens I entered another nice phase of the walk which took me from Lumbutts to the Rochdale Canal. This section over Lumbutts Clough was delightful walking in fields full of summer colour with a multitude of wild flowers. The wild flowers gave way to well kept ones in the houses near to the canal as I approached the waterway. I arrived at the canal at Castle Street Bridge. 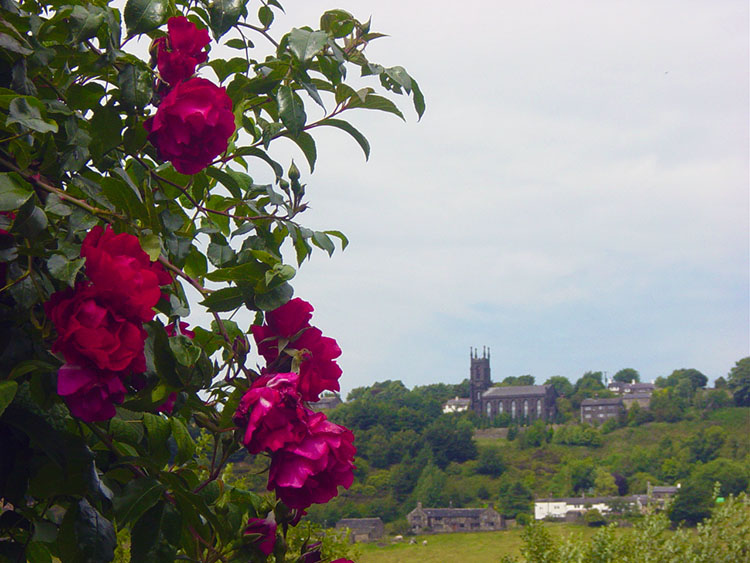 Looking across to Millwood from the Rochdale Canal 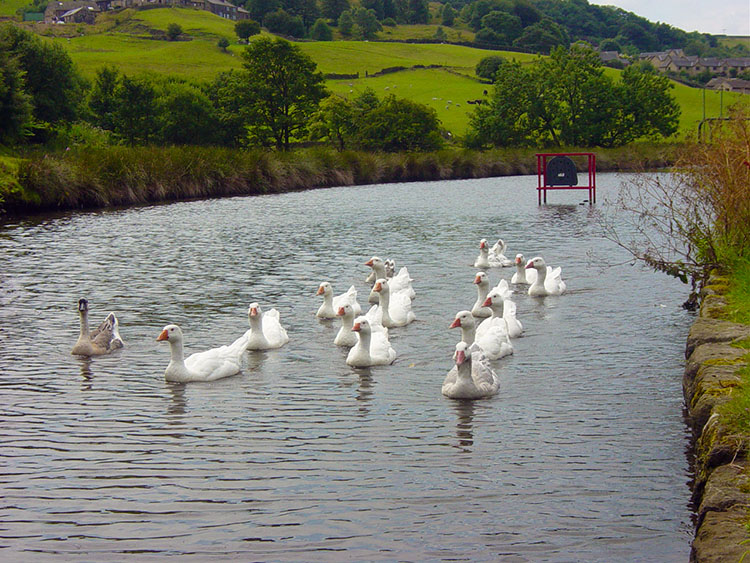 Gang of Geese cruising on the Rochdale Canal

The weather had been mixed, dry but often cloudy. The cloud was lifting by the time I reached the canal and I enjoyed the final three miles of the walk along the towpath with increasing bursts of sunshine breaking through the cloud. When it won the battle with the clouds the sun enhanced the colours of summer. I strolled along the towpath in high spirits. This was a fantastic start to my adventures in Calderdale and the last three miles were the icing on the cake. Wild flowers were in profusion on the canal bank and sometimes on both sides of me for the River Calder often closed in to the canal with me walking a narrow line between the two waterways. 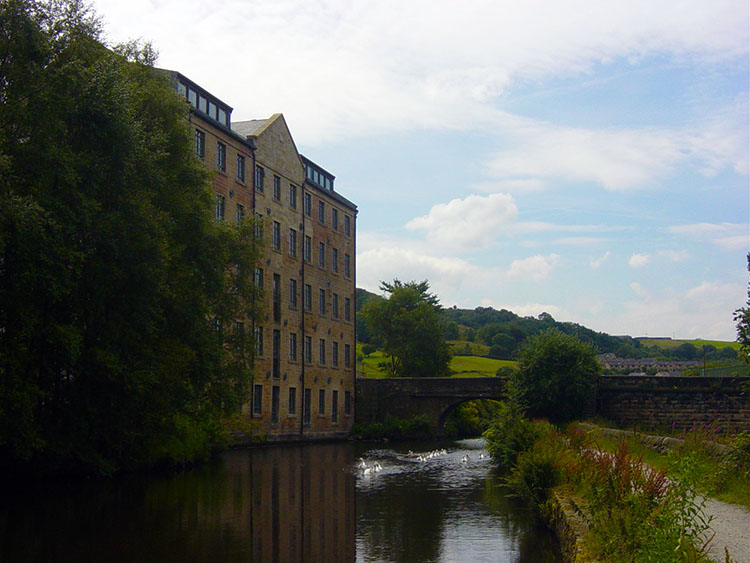 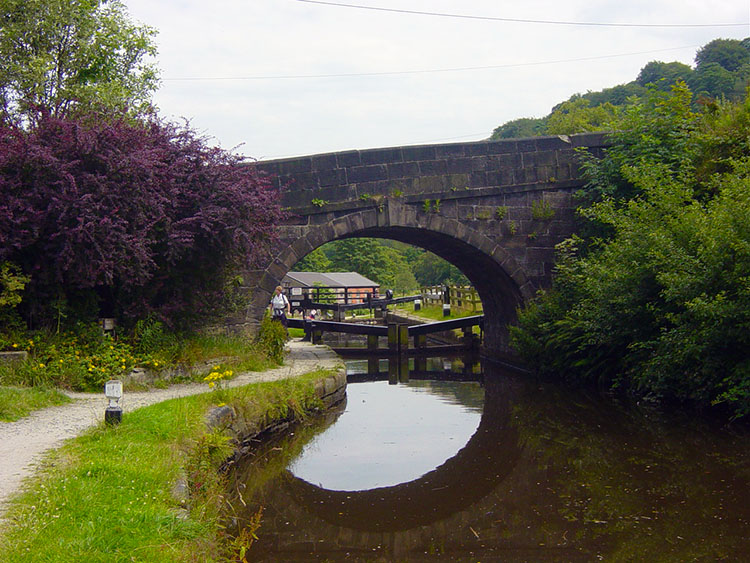 Old bridge over the Rochdale Canal

In fact the valley is so narrow in places that in a few yards you could be within 20 metres of the canal, the river, the road and the railway. In some places I was and I could tell because of the urban noise. In others the canal pulled away and I was in absolute calm. I did have encounters on this three miles. Sometimes I came across fellow walkers, or lovers, or dog walkers or a dad and his son riding bikes on the towpath. My first meeting was with a large group of Geese which decided to follow me for a while. That was fun. 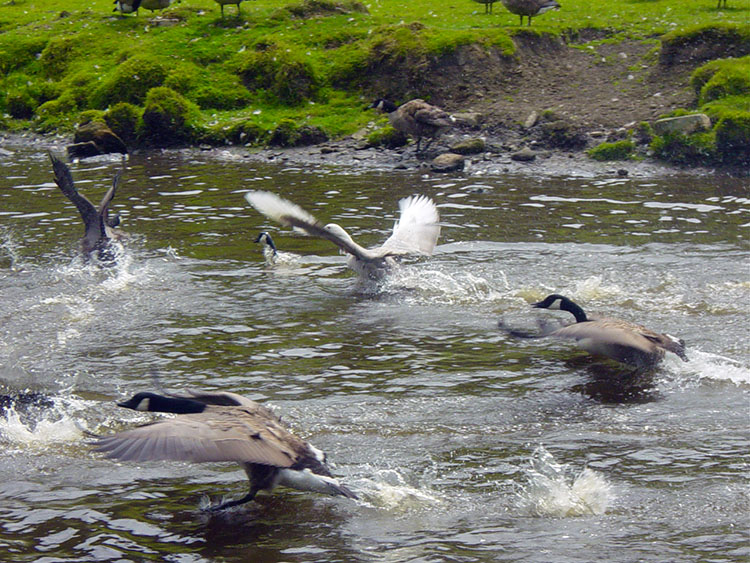 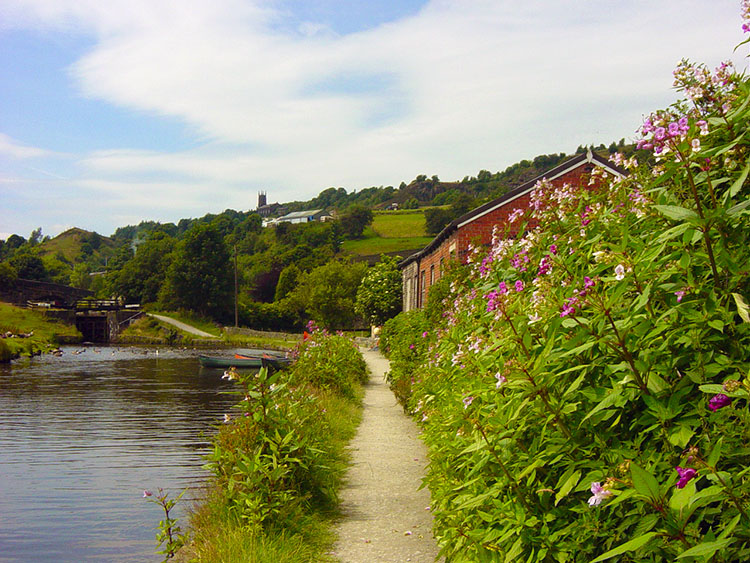 Walking along the Rochdale Canal near Charlestown

Then I came across a group of Barnacle Geese. They decided to put on a noisy show of taking off and landing on the canal. It was hilarious. Then there were the numerous meetings with people and boats, but in all the three miles of walking along the canal none of them were moving. 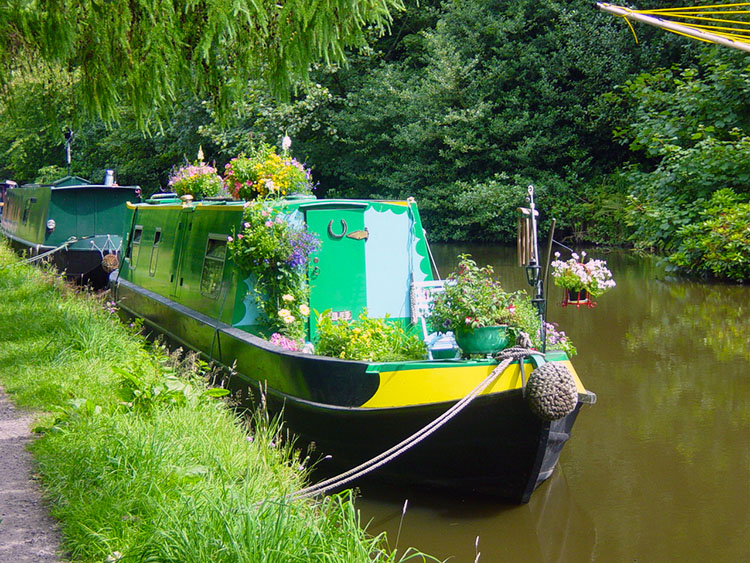 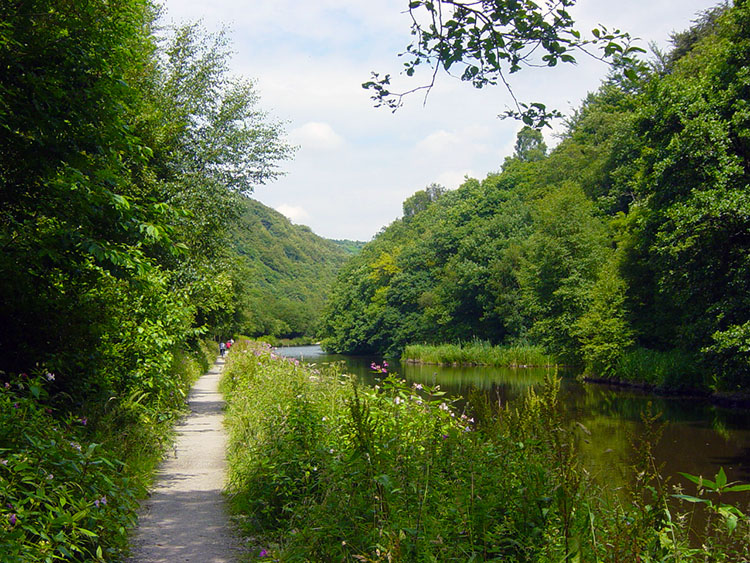 The narrowboats were all moored. Some were ordinary but most boat folk make an effort and some were really splendid with flower displays added to embellish the paintwork, as the one in the photograph exemplifies. As I neared the end of my delightful walk I felt I was tiring. The sun had been baking down for the last three miles and that was just enough. I had walked nine resplendent miles in some of the best Calderdale country. I had finished my first walking experience here and immediately looking forward to exploring it some more, after a bath and a little recovery time.