Summary: One of the first things I noticed on this walk was that all the footpath signs were written in Japanese as well as English. I had never seen that before in all my walking before but after considering where I was walking then the reason becomes clear. This walk was going to talk me on a literary journey over Haworth Moor to Withins ruins. These insignificant ruins are the supposed site of Wuthering Heights, the home of the Earnshaw Family in the classic novel by Emily Bronte. The ruins are visited by many pilgrims every year included lots of Japanese tourists who seem to love the Bronte sisters. To get to the ruins I enjoyed a walk through Penistone Country Park near Haworth (once home to the Bronte sisters) and then over Haworth Moor via Bronte Waterfalls before returning by rounding Harbour Hill and walking a long quite and lonely moor back to my starting point at Penistone Country Park. 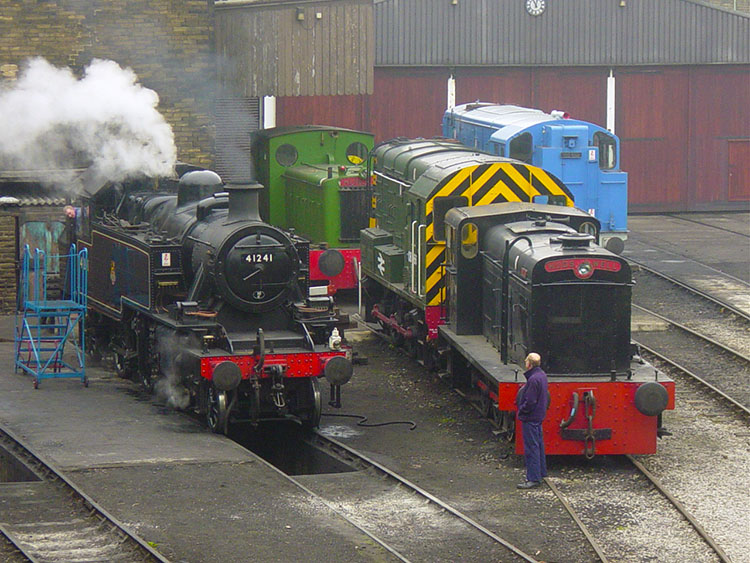 Trainspotting in Haworth before the walk 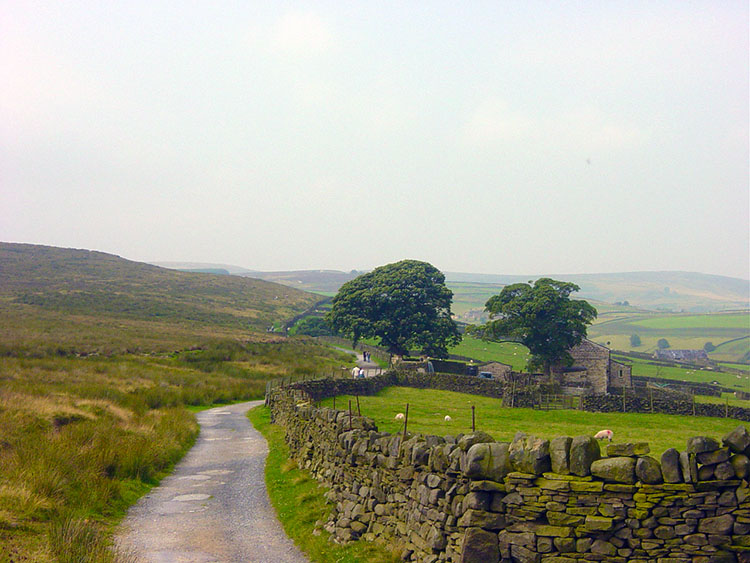 Walking to Haworth Moor at Enfield Side

This walk is popular. Don't expect to be on your own if the weather is fine. You may get peace and quiet if you walk on a bleak windswept rainy day, and you would then also get the weather moods Miss Cathy endured on her liaisons with Heathcliff on the moor. However, I did the walk on a fine summers day and although it was on a Thursday which is usually the quietest day of the week for walking there were quite a few others doing the walk as well. About half of my fellow walkers only did half of the route, their target being Bronte Waterfalls, the other half walked on up to the moor and to the ruins of Withins Farmhouse. I began my walk in one of the many car parks provided for visitors to Penistone Country Park. This is a delightful little park which, as it was early August was full of colourful wild flowers all over. There were lots of people walking on the criss-crossing paths of the park enjoying the flower delights. I made my way though leisurely while taking in the colours before arriving at Enfield Side, my entry point on to Haworth Moor. Here I met a few small groups of walkers, a few couples and a few family groups. 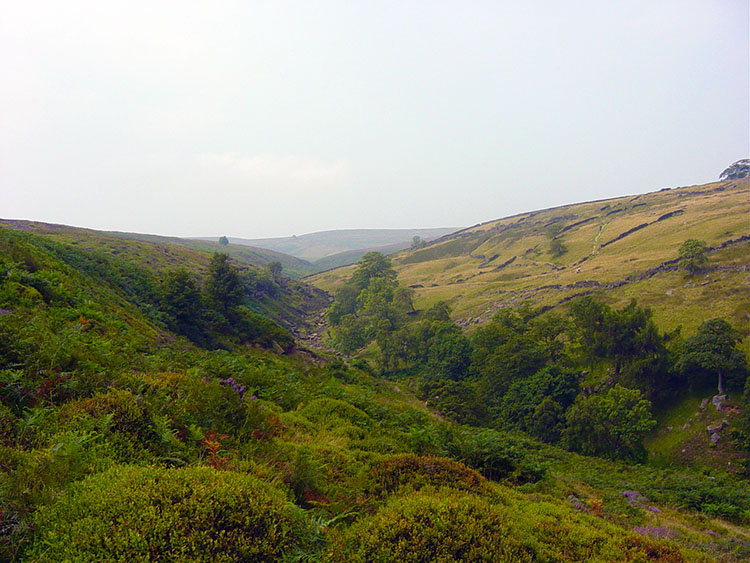 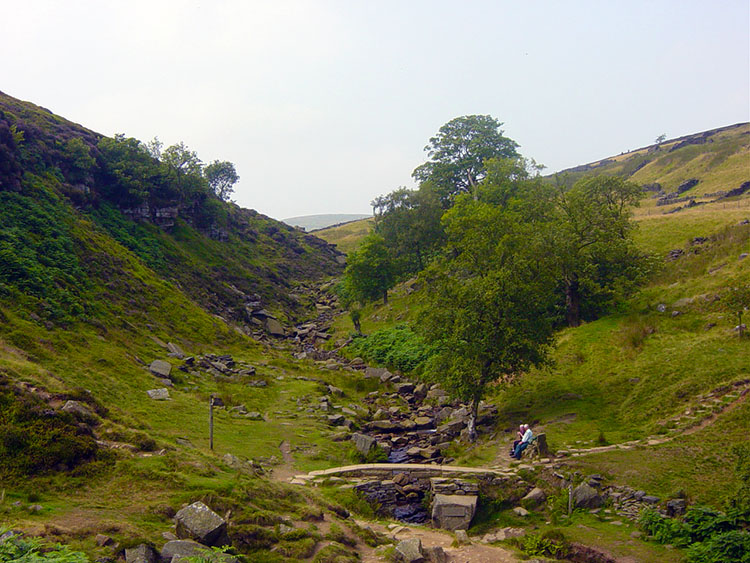 As I walked along the path and onto the moor my eyes were immediately drawn to the moorland. The faintest carpet of purple was forming, the heather was starting to blossom. Although only in the early stages of splendour the sight was inspiring and I instantly resolved to spend the next two few weeks finding walks where I can enjoy this wonderful scene to the full. Walking is not a random business, you must pick your walks according to the optimum season. In spring bluebells draw you to woodland, as does autumn because of the wonderful colours the fading tree canopies provide. Winter is for the fells when fantastic snow or frost coverings of the land can be beautiful. In summer there are many choices you can make and to walk amidst moorland heather in mid to late summer is one you must not miss. I won't. After walking for about half an hour I arrived at Bronte Waterfalls. 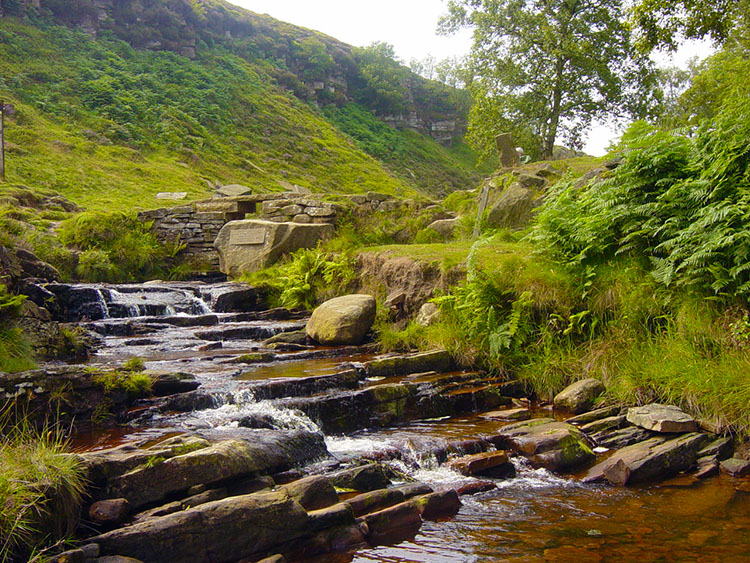 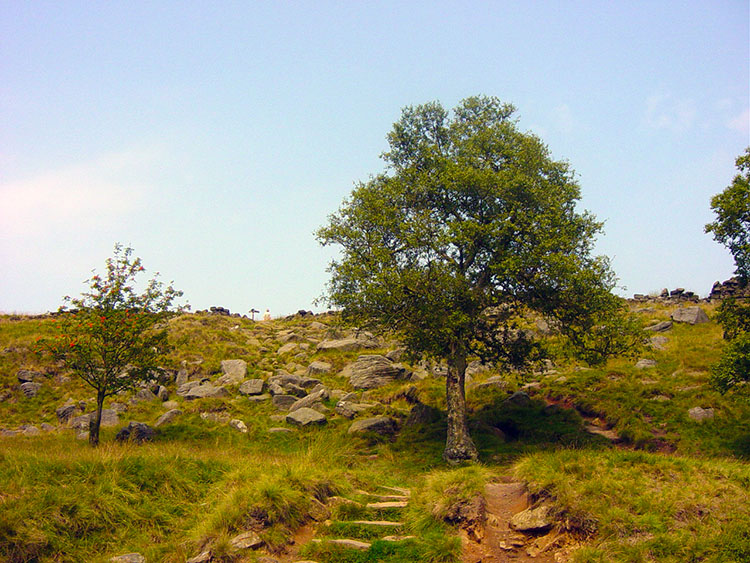 Don't expect a great cascade at Bronte Waterfalls. The water features are a series of small stepped falls over layers of gritstone. It is a place for children to play safely and a few were doing so when I was there. Also a few couples were relaxing at the site eating lunch or just relaxing in each others company. I left the peaceful Bronte Waterfalls and straight away did the tough part of the walk. It was a stiff climb onto the moor and then a gradual ascent up to the Top Withins ruins. I had seen them from a distance soon after the start of the walk at Enfield Side and a half hour later was there. 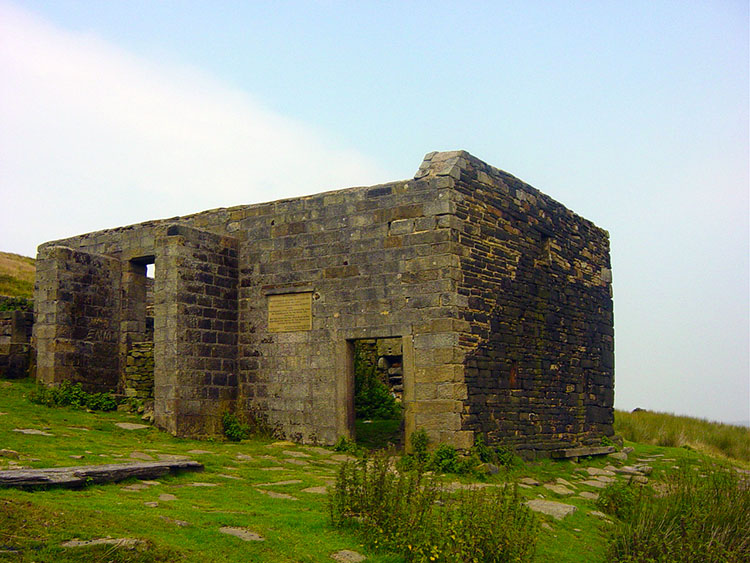 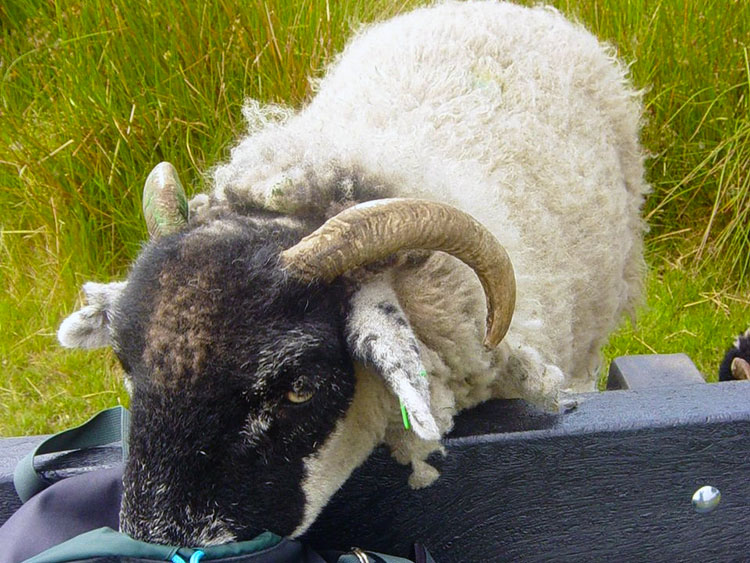 The thieving sheep of Top Withins

The ruins are evocative but do not expect the scene of a manor house. In fact they are the remains of a very average farmhouse and although they are in a lofty place with excellent views of the moor there is nothing to suggest they were of any grand scale. A plaque attached to the building tries to explain the link between the farmhouse and 'Wuthering Heights'. Still, I was going to stay and have lunch in this literary hot spot. I sat down to my Sardine and Tomato sandwiches but did not get beyond the first bite before I was attacked by sheep! There must have been many kind visitors to these fabled ruins who have fed the sheep. So much so that they have got used to being fed and these sheep would not take no for an answer. As I was eating one sandwich one of the ringleaders poked his nose in my bag and pinched another. I was not going to recover it as the whole group were soon arguing over their booty. I salvaged what I had left and moved away from Top Withins to a place where I could finish my lunch in peace. 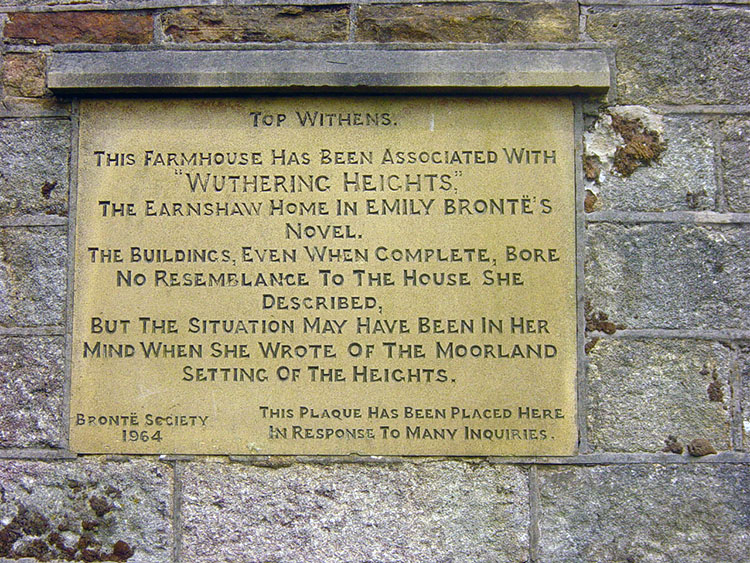 The testimonial at Top Withins 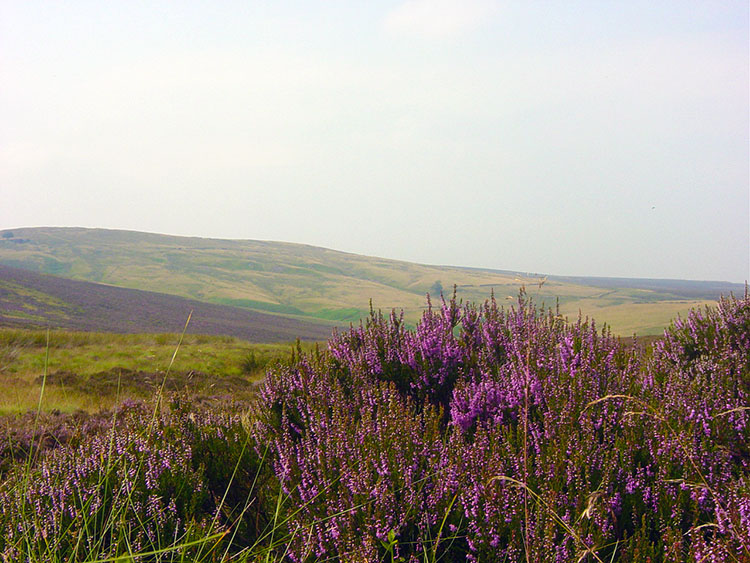 After doing so I made my way back and after some advice from a lovely couple from Liverpool I walked onto lonely moor (no people around me now) by walking up and round Harbour Hill to Harbour Lodge. While rounding the hill I again gazed at the emerging colour of the heather. There would be a fantastic blanket of purple here over the next month. 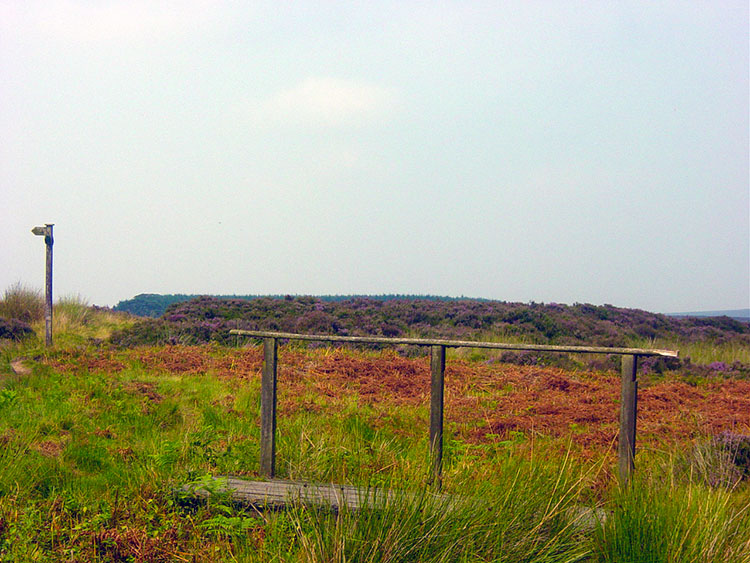 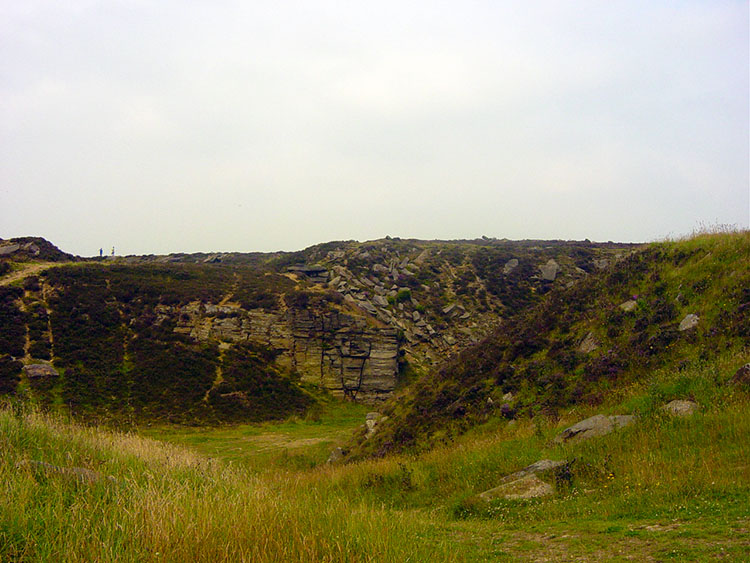 After passing the farmhouse at Harbour Lodge which stands in the most fantastic isolated setting I followed tracks over the highest part of Haworth Moor at Wether Hill which provided excellent views of the surrounding countryside. It was a super quiet half hours walking until I emerged off the moor back at Penistone Hill Country Park. After walking though a different part, still enjoying excellent colourful scenes as I had done at the start of the walk I arrived back at the car well satisfied.