Summary: The Victoria Tower on the summit of Castle Hill is by far the most conspicuous landmark in Huddersfield. It sits on the site of an ancient hill-fort and can be seen from as far away as the M62 corridor. This short half-day/ summer evening walk, centered on Castle Hill explores the lovely countryside south of Huddersfield.

The Walk: A lovely short walk with my wife Lil and Sara, her best friend. Lil spent her childhood and early adult life in the South Huddersfield area while Sara still lives in the shadow of Castle Hill. We were staying with Sara for the night so we set off from near her home at Ashes Common. If not for Sara's hospitality I would start the walk from Castle Hill. There is ample parking there and you will get the opportunity to look out from the impressive viewpoint on top of the hill twice. For us we had just one opportunity but the mid-March weather was set sunny so we were almost guaranteed great views when we got to Castle Hill. 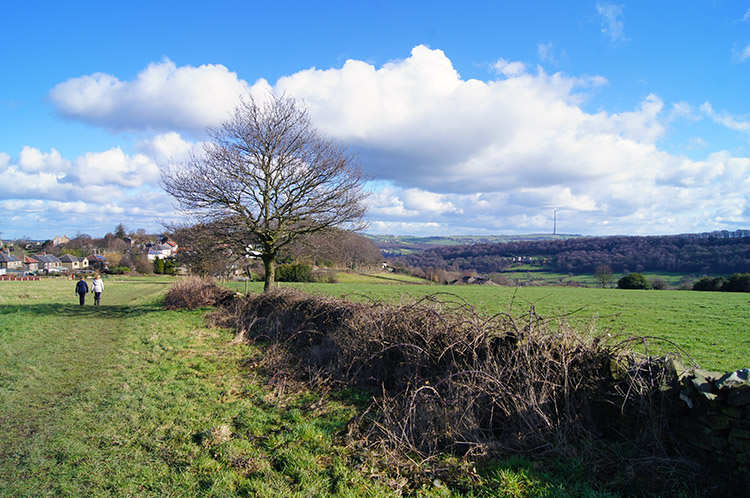 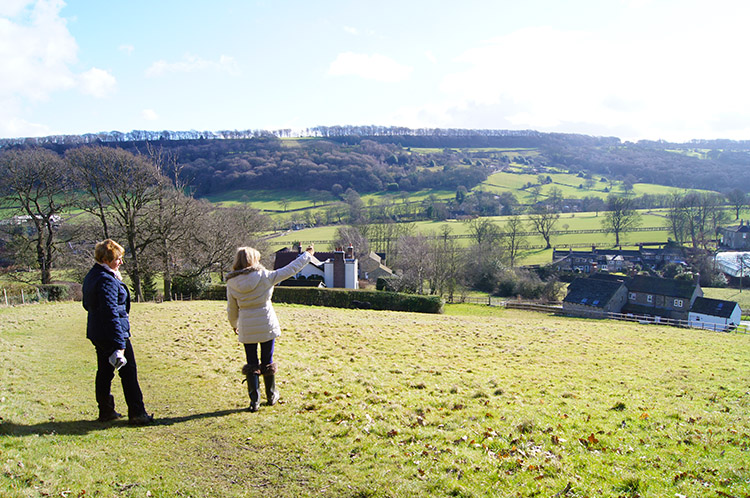 Looking across to Farnley Bank

It was just afternoon when we set off from Sara's and walked along the path through fields towards Almondbury Common. The view south-east to Emley Moor was gorgeous and I could not avoid being drawn to use the Television Transmitter Tower as my personal picture centre. The girls talked as they walked, catching up on all the goings-on in their social groups while I followed closely behind and quietly while taking in the views. Due south of us was Farnley Tyas where both Lil and Sara had shared many an adventure. The tree line on top of Farnley Bank made for an easy sighting point to locate the village on the skyline. At Wheat Royd we skirted past a small enclosed copse and turned from east bound to the south, descending towards Bottoms Farm from where we followed the Almondbury Common to Farnley Tyas Road until we reached Bank Foot Bridge. 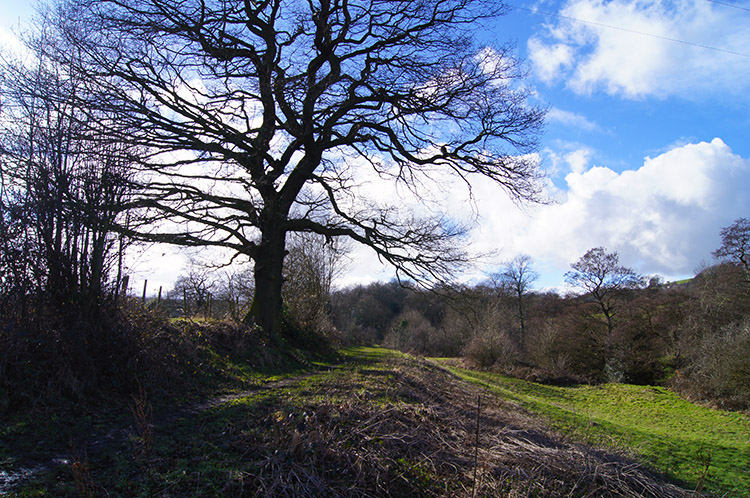 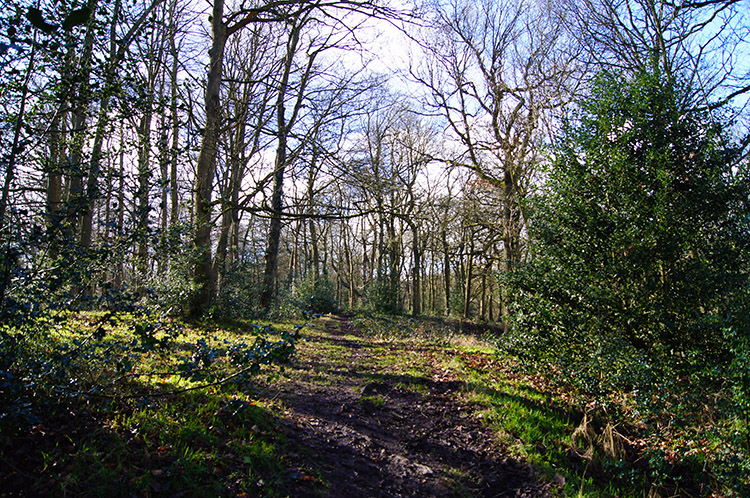 The views from the 200 metres altitude line from which we had started were all gone now. Bank Foot bridge, at 120m, was the lowest point of our walk. Despite the enclosure the walk changed in character to a pleasant stroll adjacent to the line of Lumb Dike. Being March, the sun was not yet high enough nor long enough in the sky to warm the ground enough to dry the paths. We each slipped and slid on the mud once or twice on the path until we climbed up a bank into Molly Carr Wood. Even here, in this quaint woodland which the girls both had treasured memories of, some sections of path were squelchy. We skipped around them. Though the woodland was not showing any signs of budding into spring lime greens the birds were singing. The avian courtships of Spring had already begun; the early bird catching the fairest maid? 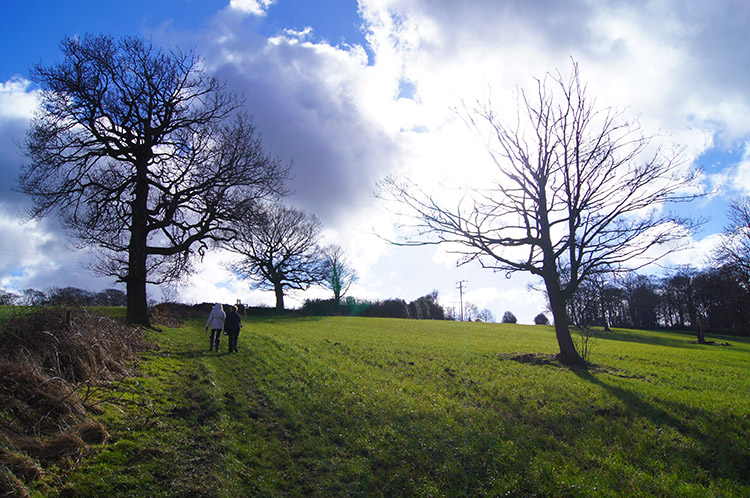 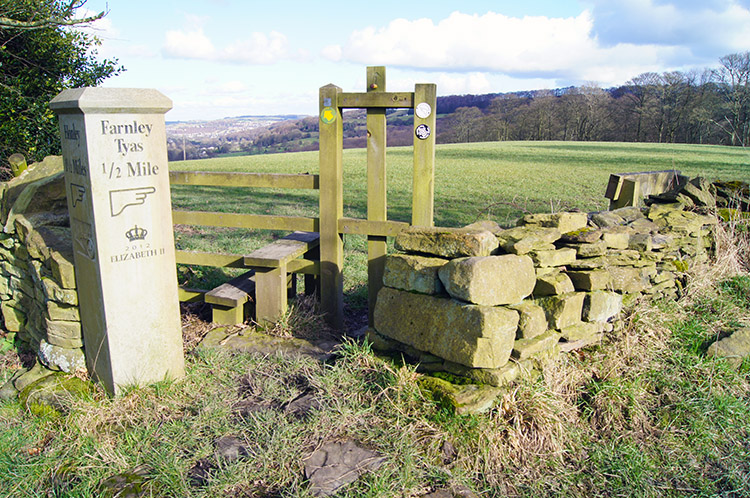 Molly Carr Wood has seen us make a slight ascent from the low point at Bank Foot Bridge. Though we had barely noticed it we had climbed 40 metres. After Molly Carr Wood, in just one field we climbed the same again. By the time we had climbed that field, in the picture top left, we had regained all the height lost earlier and were back to the same altitude we had started at. The views had not quite returned though, we were enclosed by slightly higher ground to the south and by Arthur Wood to our west. The gap across the valley created by Lumb Dike to the north allowed us a good view of Castle Hill standing high on the brow of the hill over the valley gap. Clouds were rushing across changing the mood which I hoped would have returned to a sunny smile by the time we got there. 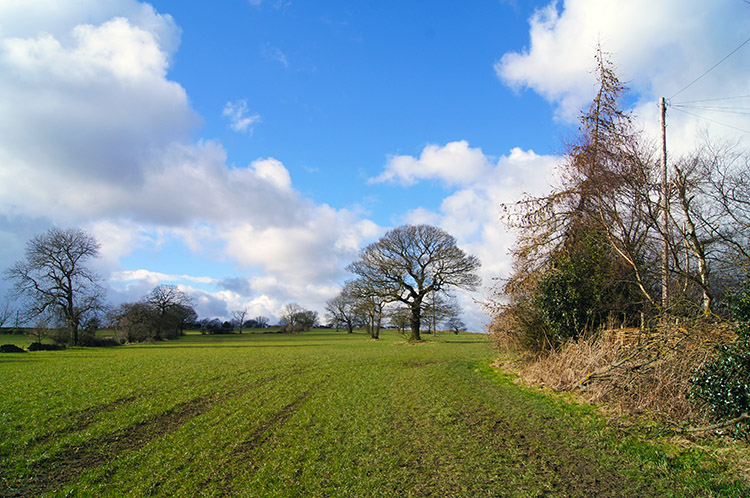 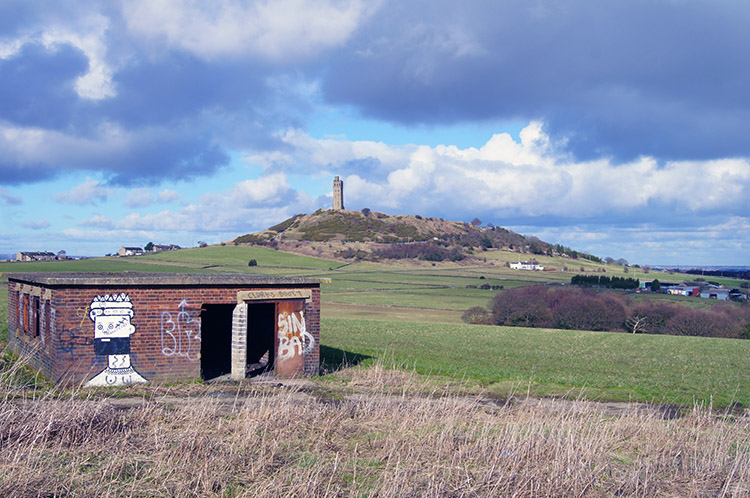 After the haul up the steepest field of all and then the walk along the next field we reached Farnley Hey, a small community of one row of terraced houses. About six to eight of them; I did not count. From Farnley Hey the views opened out once more and the sky parted most of the cloud to give us a majority of blue. The suns rays were warming, the first time in the year. March is notable for seeing the sun get higher in the sky as each day passes. More height, more light, more warmth, I felt it. After crossing the big field from Farnley Hey I detoured from the path to explore a series of concrete bunkers. I guessed they were anti-aircraft batteries from the Second World War and on researching the site I was proved to be right. The site chosen makes perfect sense though, enemy aircraft attacking Huddersfield. from the west would have been spotted as soon as they had crossed the Pennines which I could clearly see almost 10 miles away. 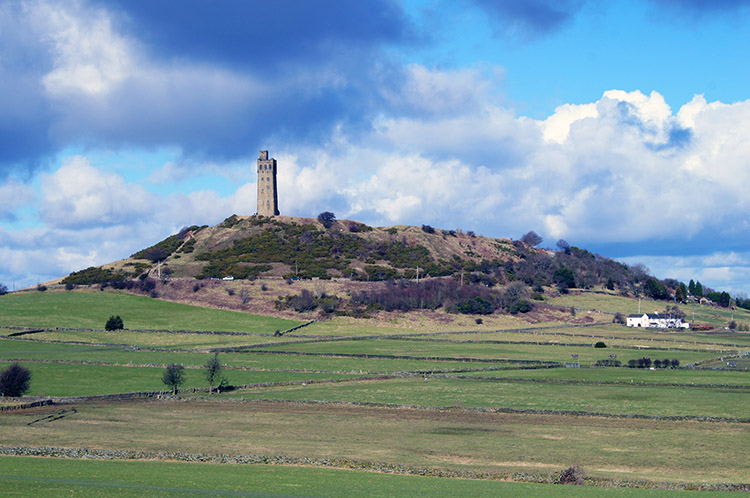 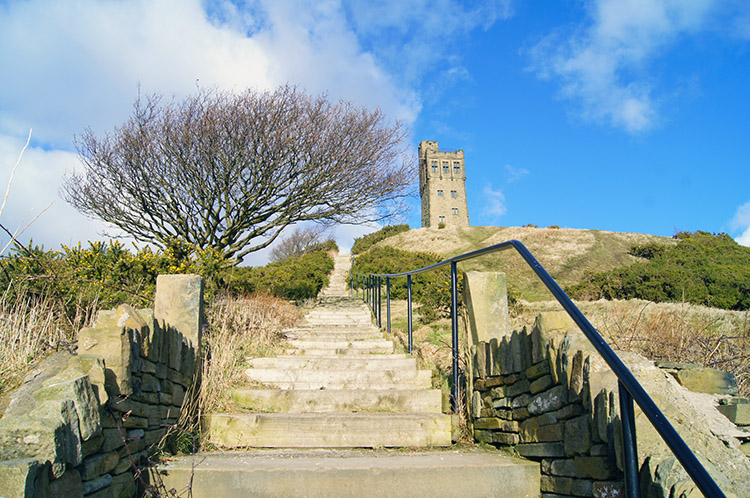 Steps up to Castle Hill

From the site of the old war defences the girls and I walked to Castle Houses. As we did Lil looked across to a row of houses on Stirley Hill. She uses to live in one of the houses and pointed it out to me. Then after the memory lane moment we all fixed our attention to Castle Hill which would be the highlight at the conclusion of our walk. It was a gorgeous afternoon, the skies looked big above us and clouds that could have been spoilers scutted quickly across the sky. There was a cool March breeze but we were all well wrapped up and the suns rays maintained their attack on the cold wind, warming our faces when we pointed them directly at the golden ball. A couple of field crossings after Castle Houses we reached Lumb Lane. After following the road up to the north for a very short distance we came to the wide car parking area where a few vehicles were parked. Nest to the parking area was the stepped approach to the summit of Castle Hill. 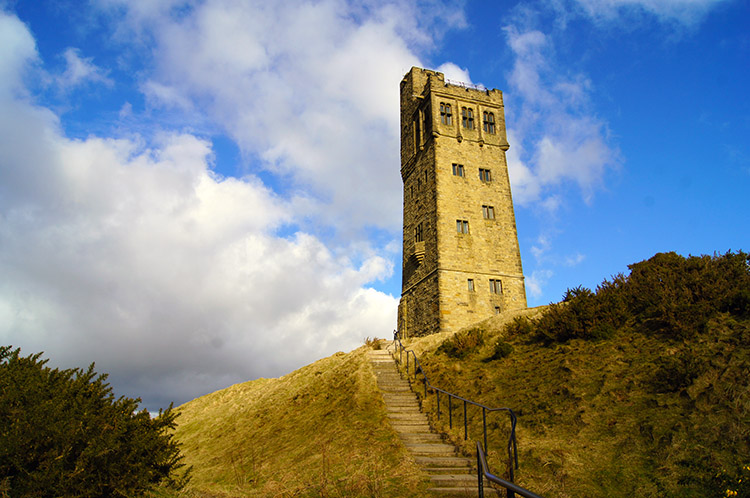 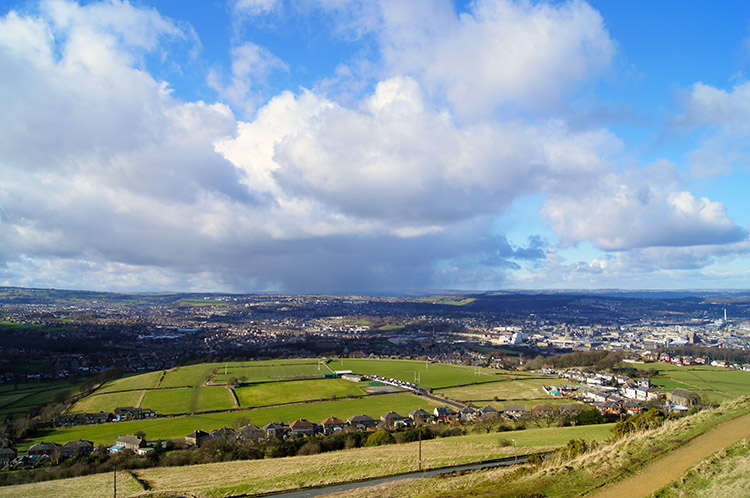 View from Castle Hill to Huddersfield

It is quite a long walk up the steps, I don't know exactly how many steps, I did not count. It was all for the thirty metres needed to reach the top of the hill at 270 metres. 180 metres below us to the north we could see all across the vast swathe of urban Huddersfield. Some clouds scuttled across the town and one particularly dark menacing one approached from the north. As I stood by the Victorian Tower looking out to the Pennines in the west and then back to the north I watched the dark cloud arrive to hover over Huddersfield, dumping a vicious shower of sleety rain and then turning to eastbound, heading in the direction of Wakefield. The storms south tip edged towards us on Castle Hill and had just enough energy to lay into us with a short burst of sleet. It was very short though, about 30 seconds in length at the most. Then the light returned. 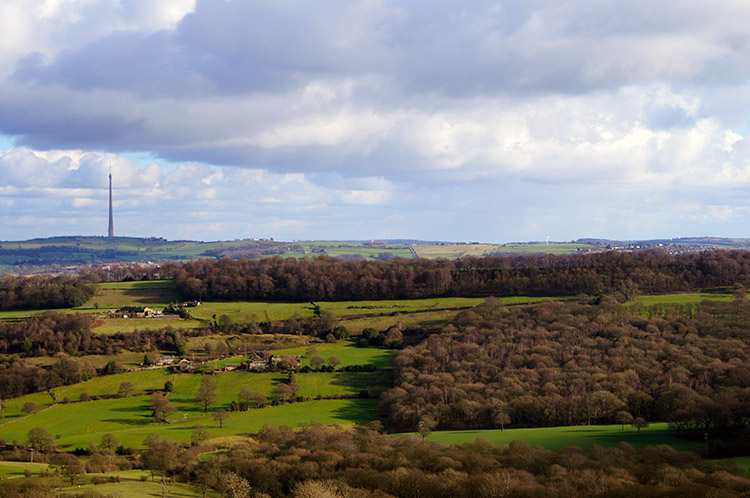 View from the hill-fort to Emley Moor 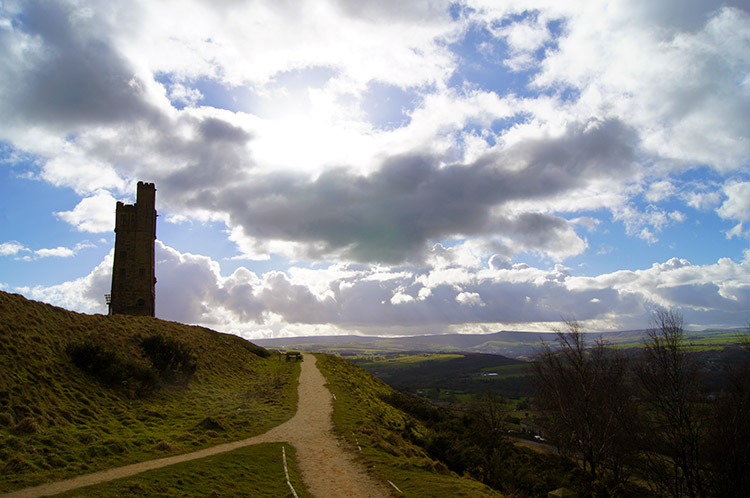 Looking back to Castle Hill and the Pennines

The moving picture show in the sky was brilliant to watch while stood up on the heights of Castle Hill. The natural rounded contours of the hill make it the perfect platform for a full 360 degree panoramic visual experience. Starting in the west the Pennines are an impressive sight, particularly the curves of Marsden Edge. Turning north, Huddersfield. is the focal point and to the east the villages of Almondbury Common, Lepton and Kirkburton. South-east is Emley moor and the unmistakable transmitter and south the barrier of Farnley Bank dominates. Keep turning and you are back to the Pennines. While Lil and Sara looked out over the enticing views I wandered around the hill a little further and from the Victorian Tower to the site of the iron-age hill fort. History shows forts on hills were common, great defences with plenty of notice provided against assailants and the reason the anti-aircraft battery is close by. Not impregnable though, evidence unearthed at Castle Hill shows this particular hill fort has evidence of substantial burning. We left Castle Hill to walk back the short distance to Sara's. The walk was a perfect start to the visit.