Summary: This walk is ideal for those of you looking for a half day stroll with the option of a stop for coffee and refreshments at a little over half way. And if you are seeking the best time of year to do this particular walk then I recommend that part of springtime when the Bluebells are in full colour in the woodlands. Which was exactly the time of year when my wife Lil and I decided to do the walk. It is a walk of two halves, the first half enjoyed in the woods and the second half enjoyed exploring the beautiful and historic town of Ilkley. Including some of the gardens and parkland with a finale of a stroll alongside the River Wharfe. 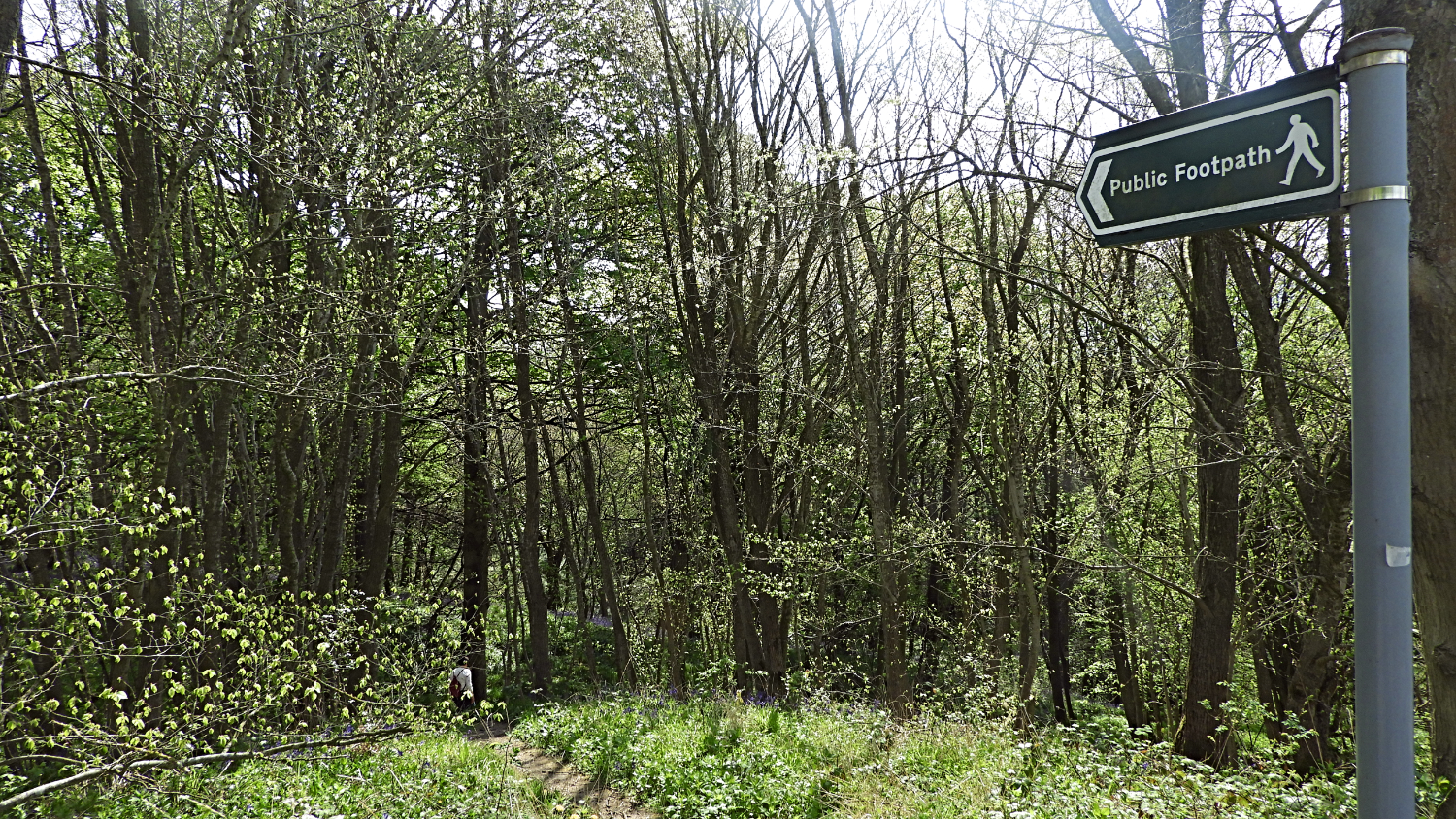 The way to the woods 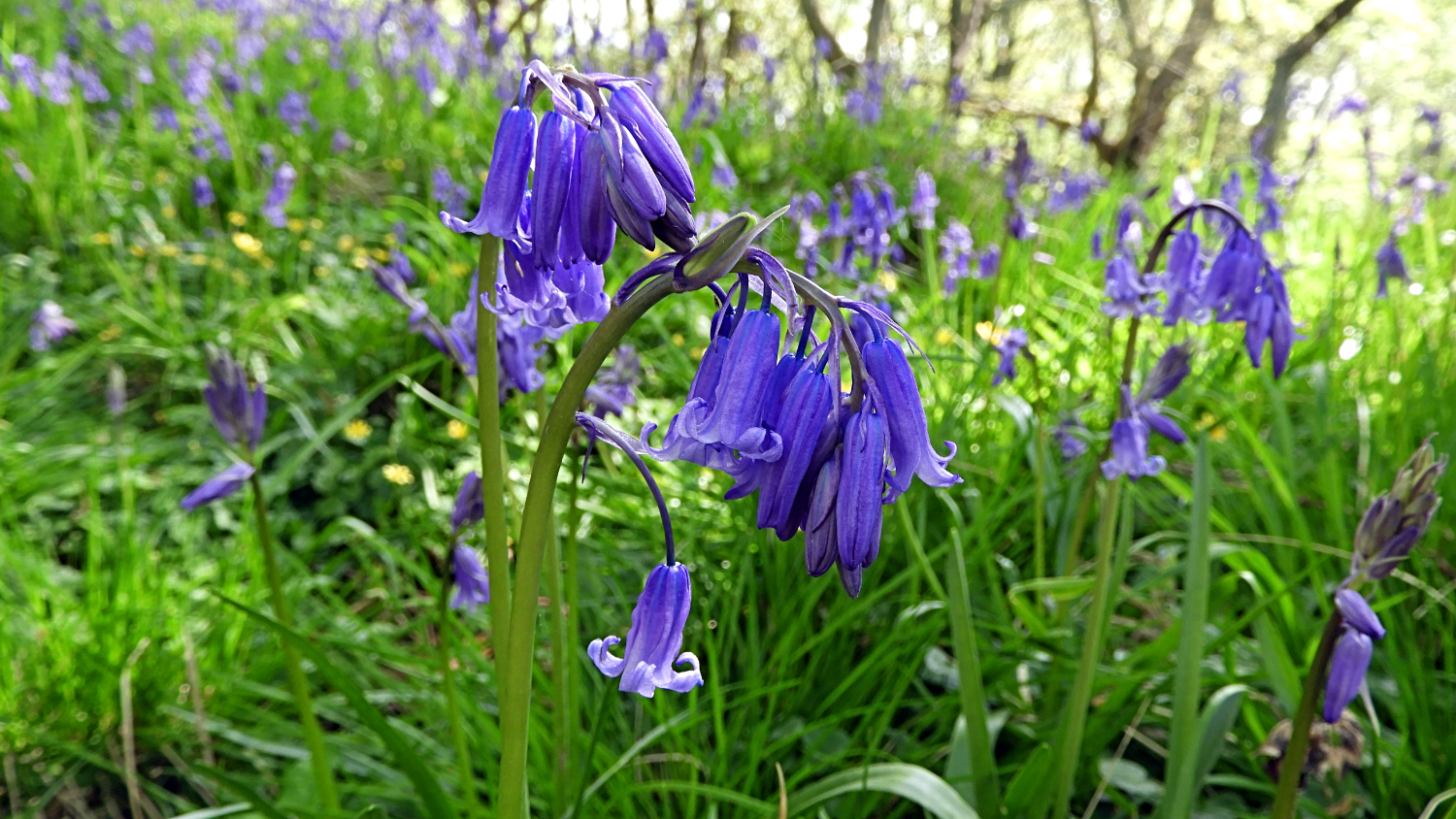 It was a gorgeous springtime morning. At breakfast I said to Lil "It is too nice a day to waste" and she hastily agreed. "Fancy a walk in the woods? The Bluebells will be beautiful now" I added. She didn't hesitate in saying "Yes". "Okay, a walk followed by lunch then eh?" said I. "Perfect" said Lil. And so the plan was set into action. I had already decided on this walk after being advised by a Walking Englishman reader about the Bluebell display in Middleton Woods. It was time to see for ourselves. It was 11.00 in the morning when we arrived in Ilkey on a sunny Friday morning. Vehicles had already filled the parking spaces by the bridge on New Brook Street and there were no parking spaces to be had on Denton Road either so we took thew first available parking space on Clifford Road, very close to the Old Bridge. "As good a place to start as any" I said to Lil and soon after we were on our way, climbing through pretty Clifford Street, Gill Bank Road and Langbar Road to reach the finger of roadside woodland above the coppice. Immediately Lil and I were gob-smacked by the beauty of the Bluebell carpets spread all around us. We had indeed picked an ideal day to do this walk.

(For information, we did this walk on 29th April, 2022. When the Bluebells were a spectacular showpiece). 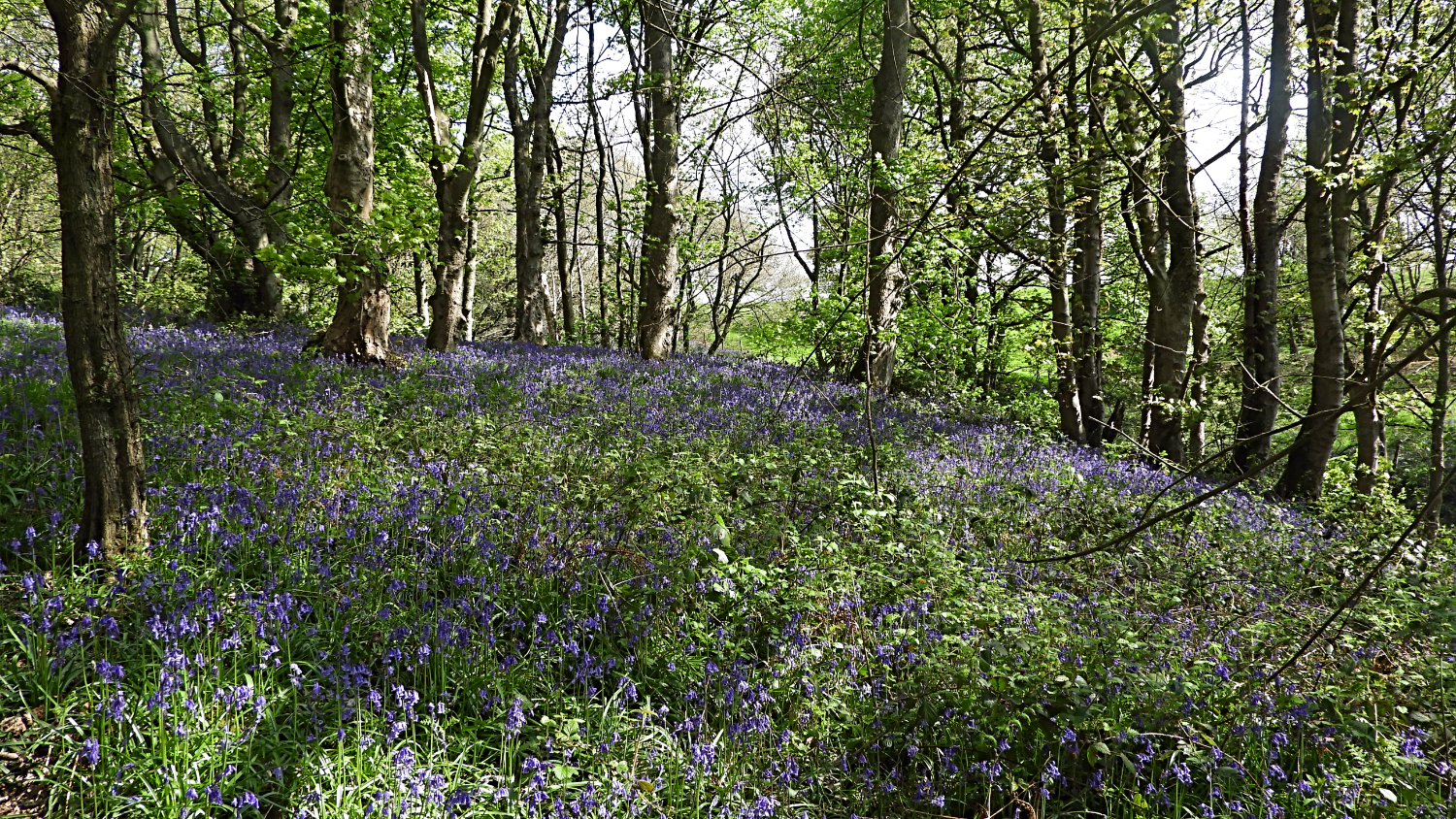 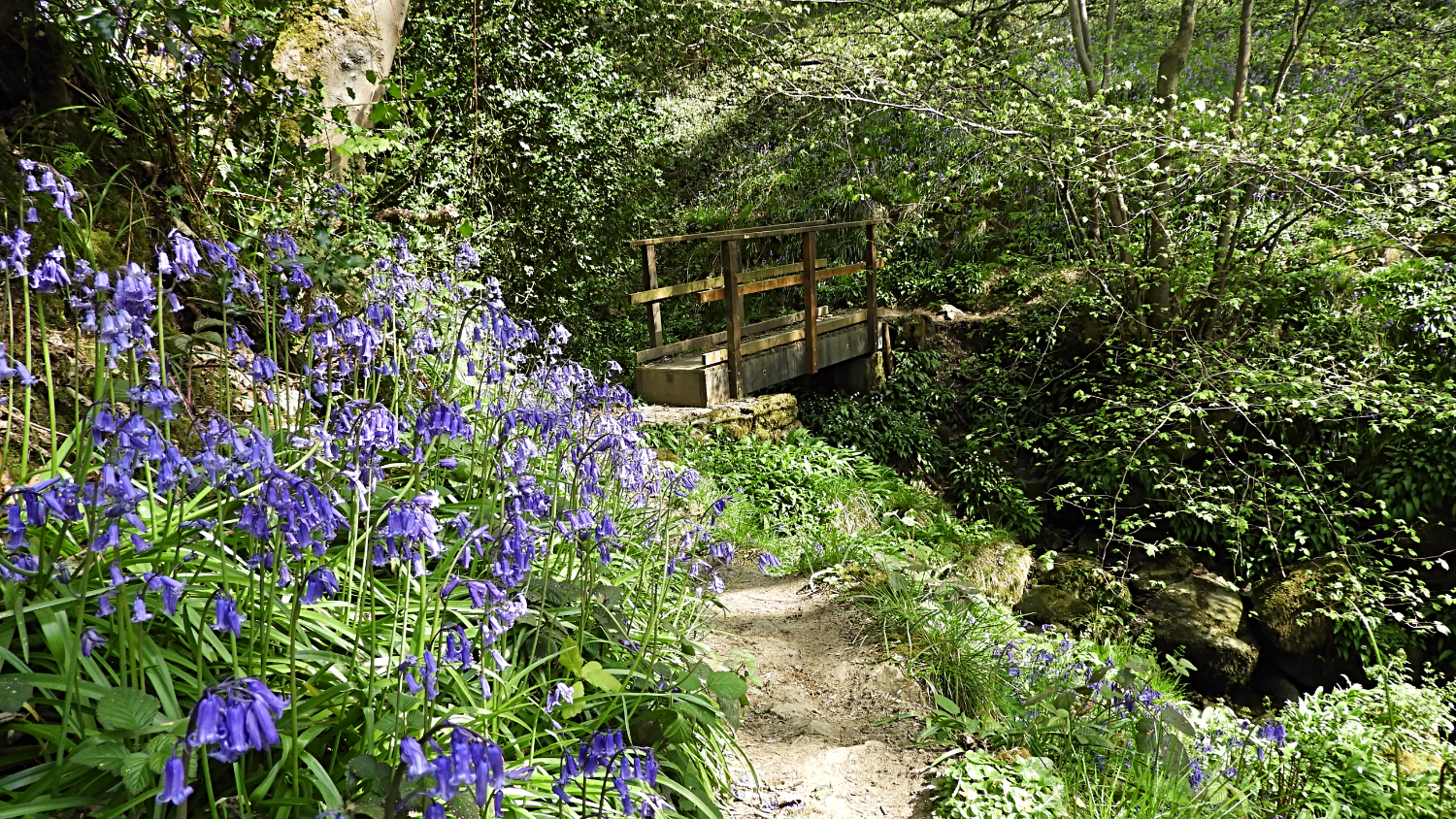 Footbridge and flowers in Coppy Wood

First we walked through the unnamed stretch of woodland set between Langbar Road and a field on the top side of the Coppice, which has the double distinction of being both Ilkley's most northerly street and highest street in terms of altitude. In this first woodland, we had already climbed over seventy metres to enjoy the springtime showpiece. It was worth the effort. After the first spread of woodland we crossed the field above the high-most houses of the Coppice to arrive at a stile giving us access to Coppy Wood. Here we enjoyed more Bluebell shows, a drop down to a footbridge over a beck and climb back to a building, now abandoned and redundant of use. At the time I thought it had probably served some water provision purpose around the time of early town development but I was wrong. It was actually a memorial to Arthur Hentzen, a local wool merchant who presented this woodland to the people of Ilkley to commemorate the coronation of King George VI in 1937. 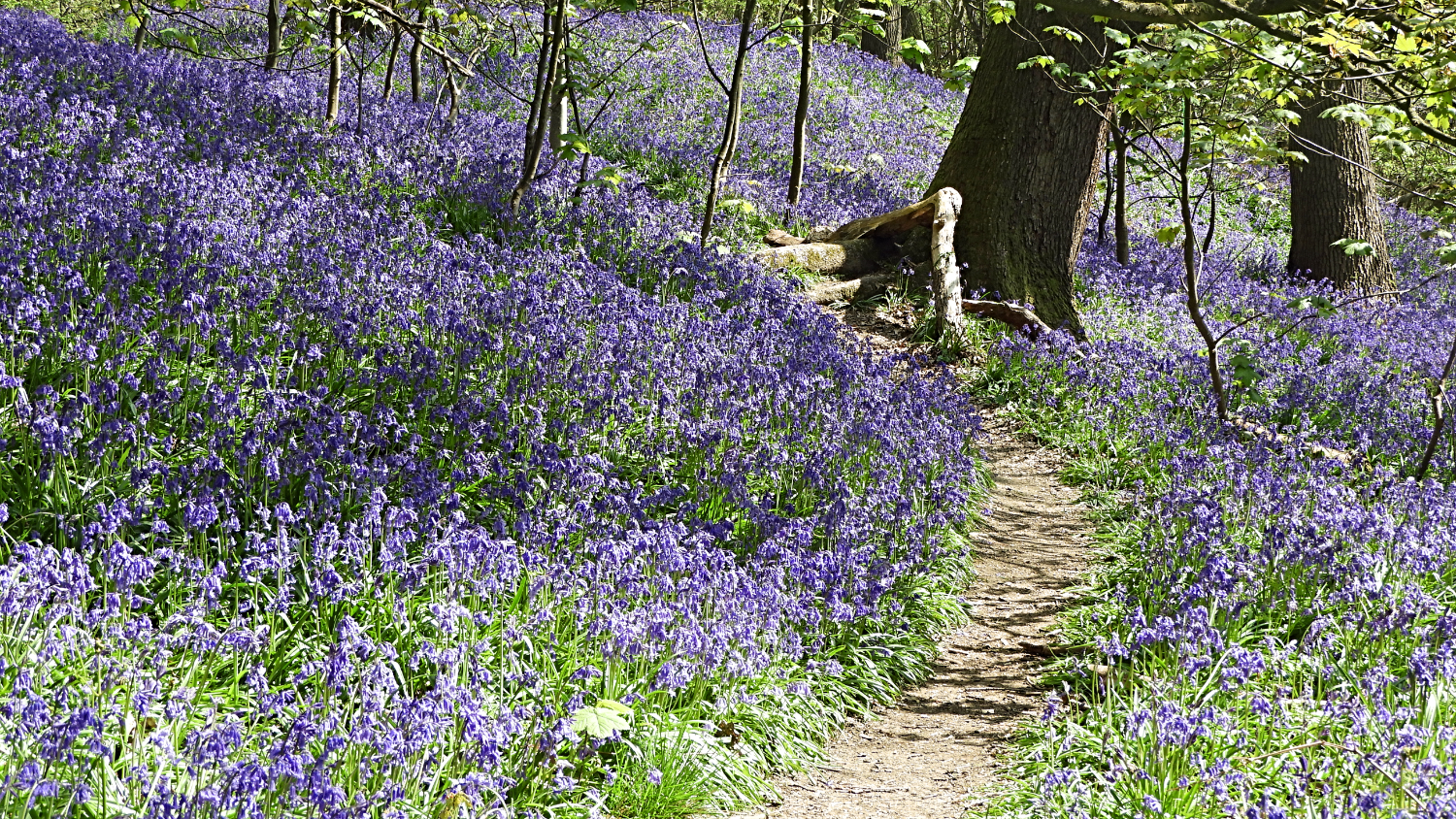 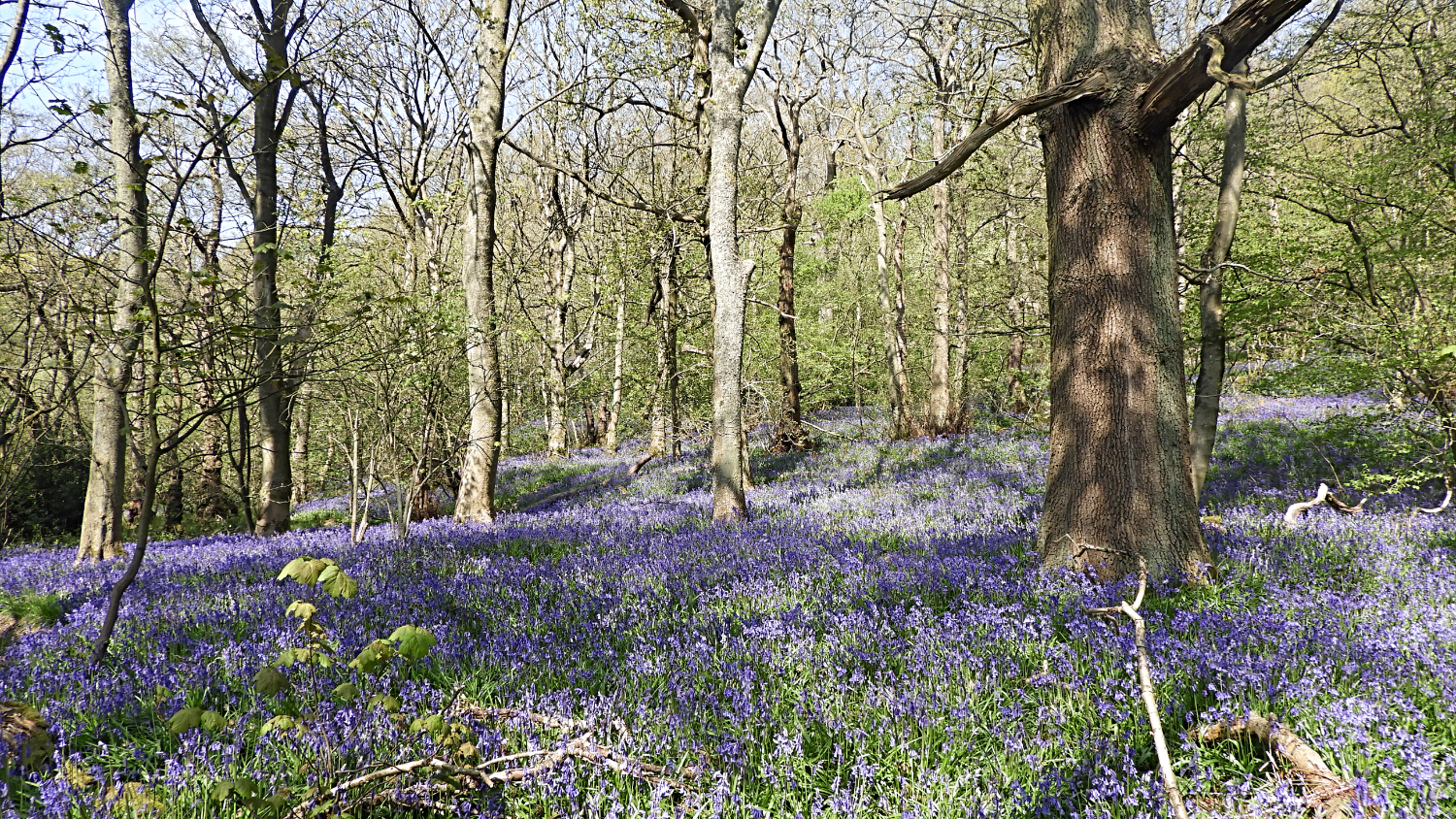 From the fitting memorial Lil and I continued meandering along the paths of Coppy Wood and then Middleton Woods. All a bit aimlessly, going here and there to see the most eye-catching spectacles. And stopping to chat with others enjoying much the same. We all agreed we could not have picked a better day to be in the woods. On every path and around every corner there was beauty. And not just on the floor. The early blossoming trees and shrubs of the woodland were beginning to put on their splendid shows too. The emerging lime green foliage and even early may blossom were thrilling the eye. It was all lovely.

(Note: Do not take my map and gpx route in the woods as granted. Wander off the track I have shown as you please. We did) 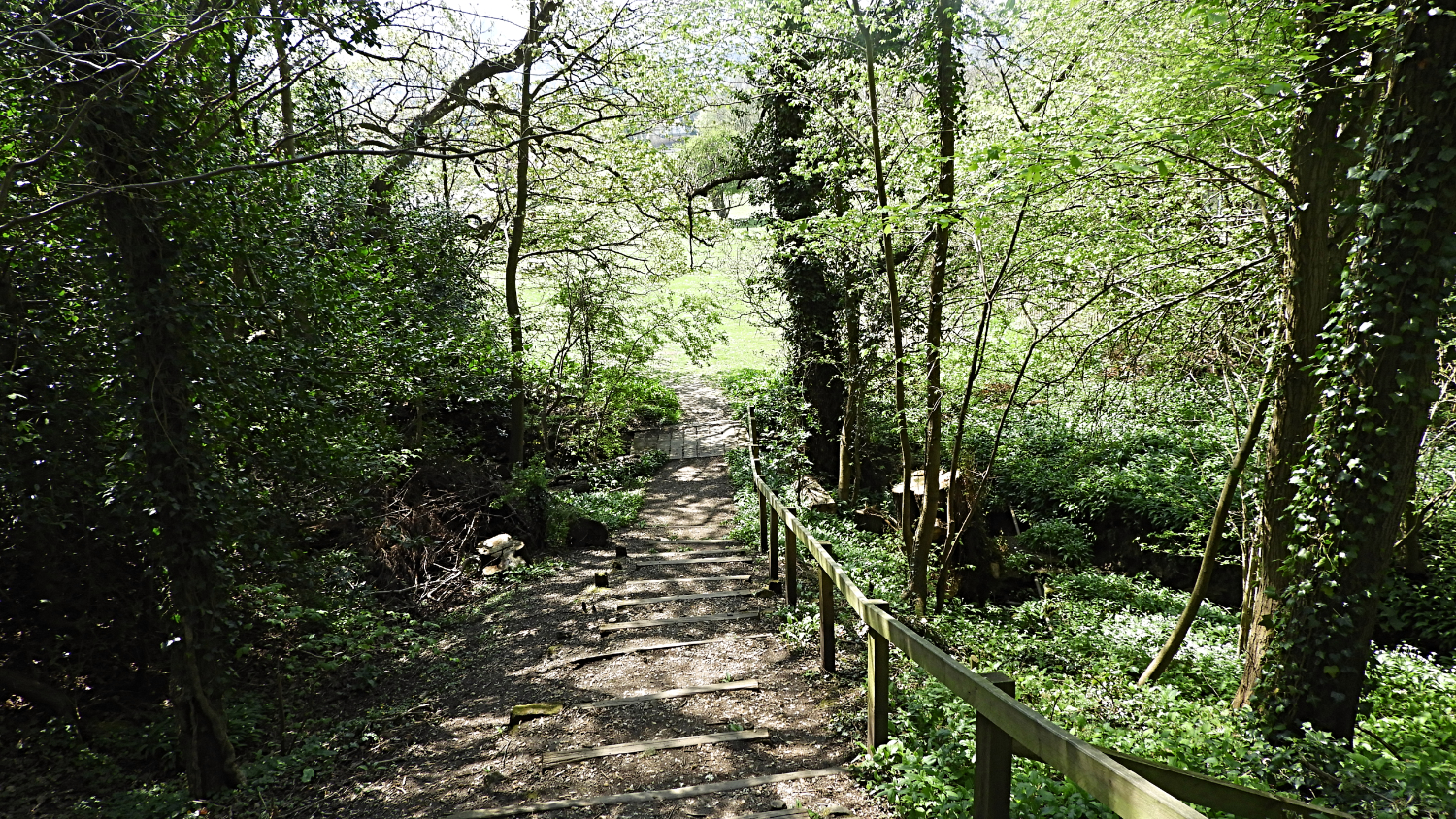 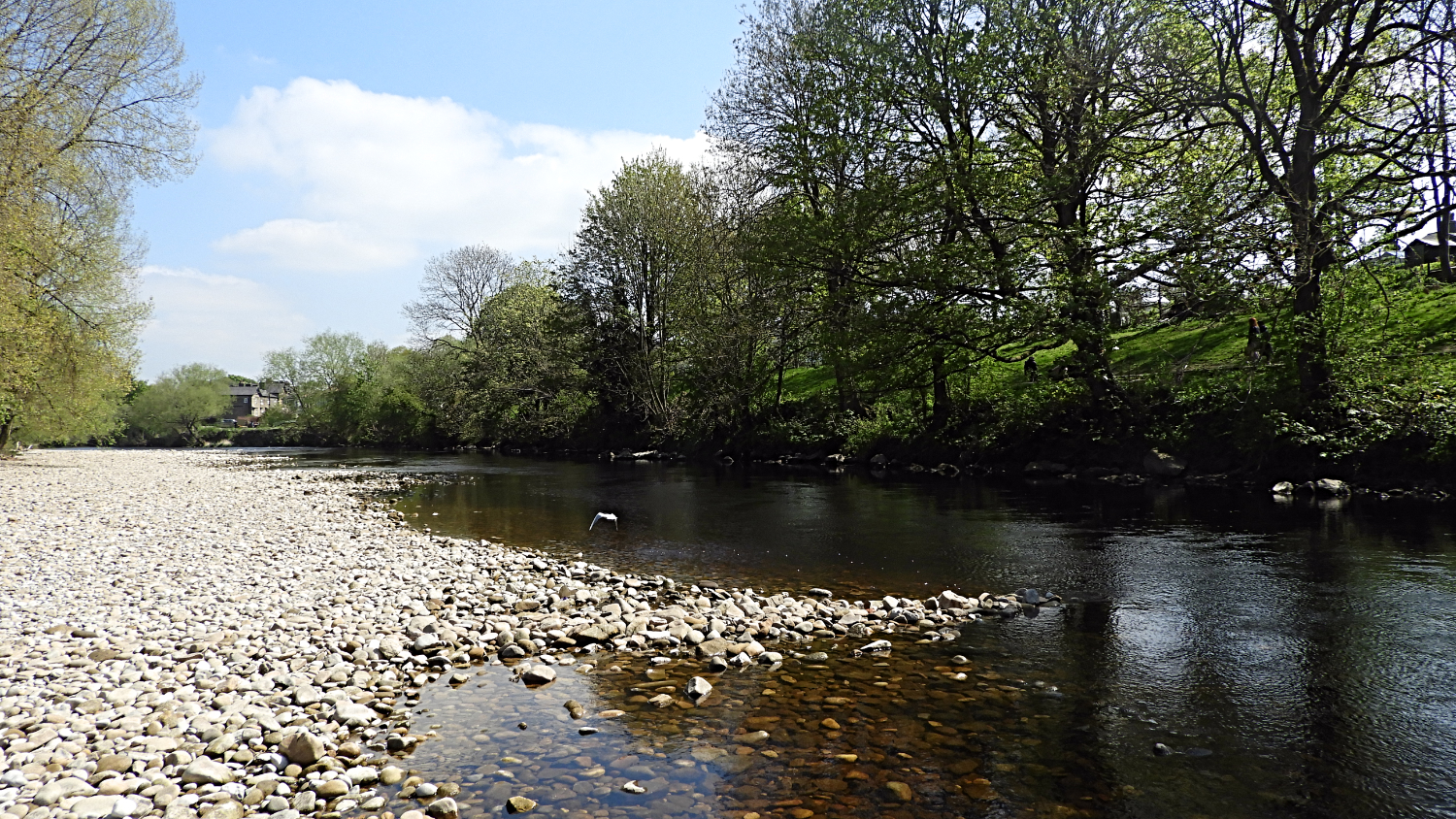 After the thrill of the woods we came down into Ilkley via lanes and the crossing of Curly Hill road to reach Ilkley Pool and Lido. Around the lido were travellers vans and all the exciting attractions of the travelling show. Yes, the fair was in town. That fact made it a slight problem for us. We followed the permissive path through the fairground in East Holmes Fields to get to the Wharfe riverside. Only it had been fenced off. Luckily a local family in front of us had the same problem but they knew where there was a gap in the fenced barrier to get through. What fortune for us who were on the verge of turning back. Momentarily disappointed at the though we followed our good fortune. Next I popped down to the riverbank and skimmed a few flat pebbles on the water. Not very well I have to say. Well out of practice. Still, it was fun trying my best. 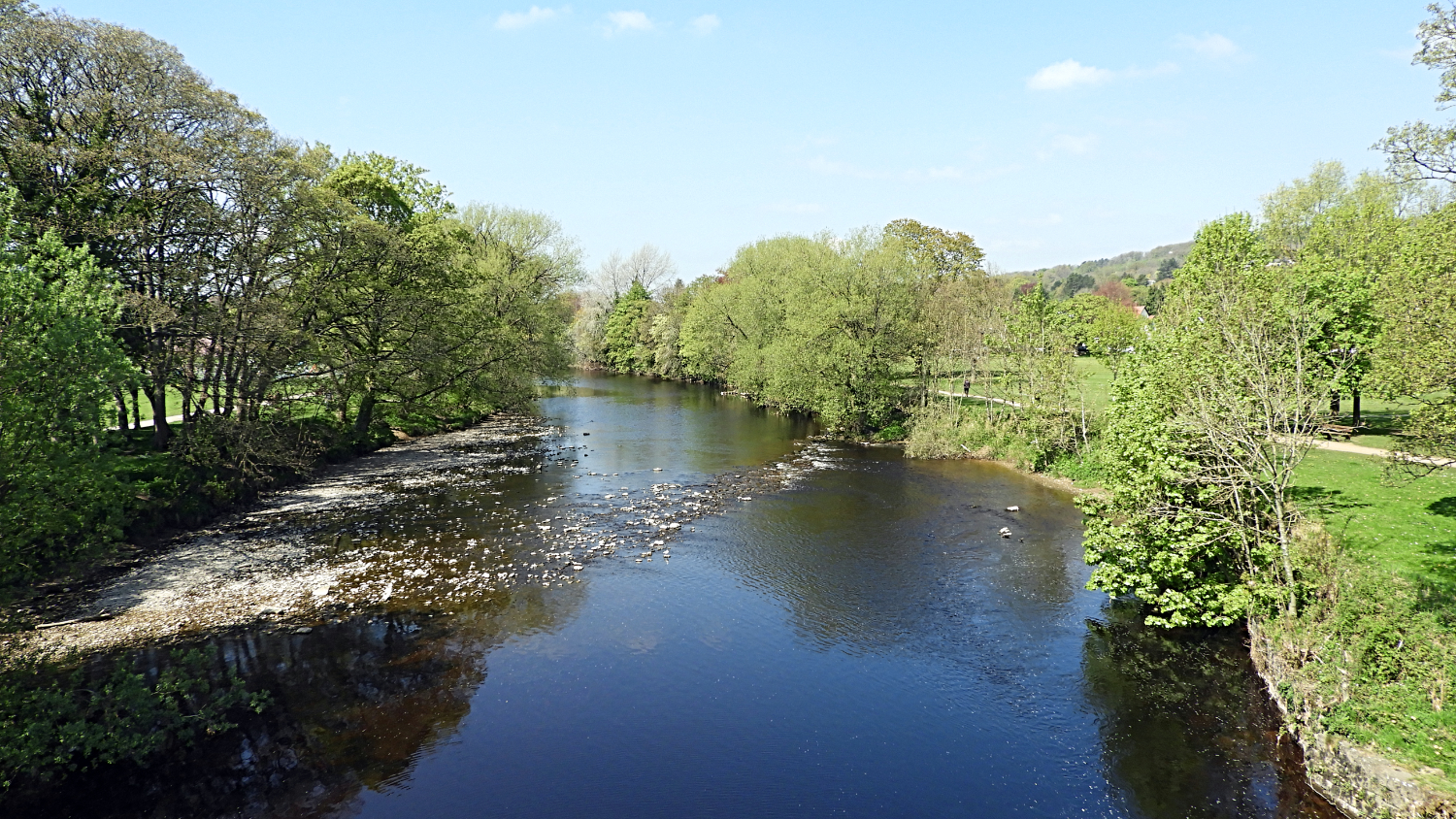 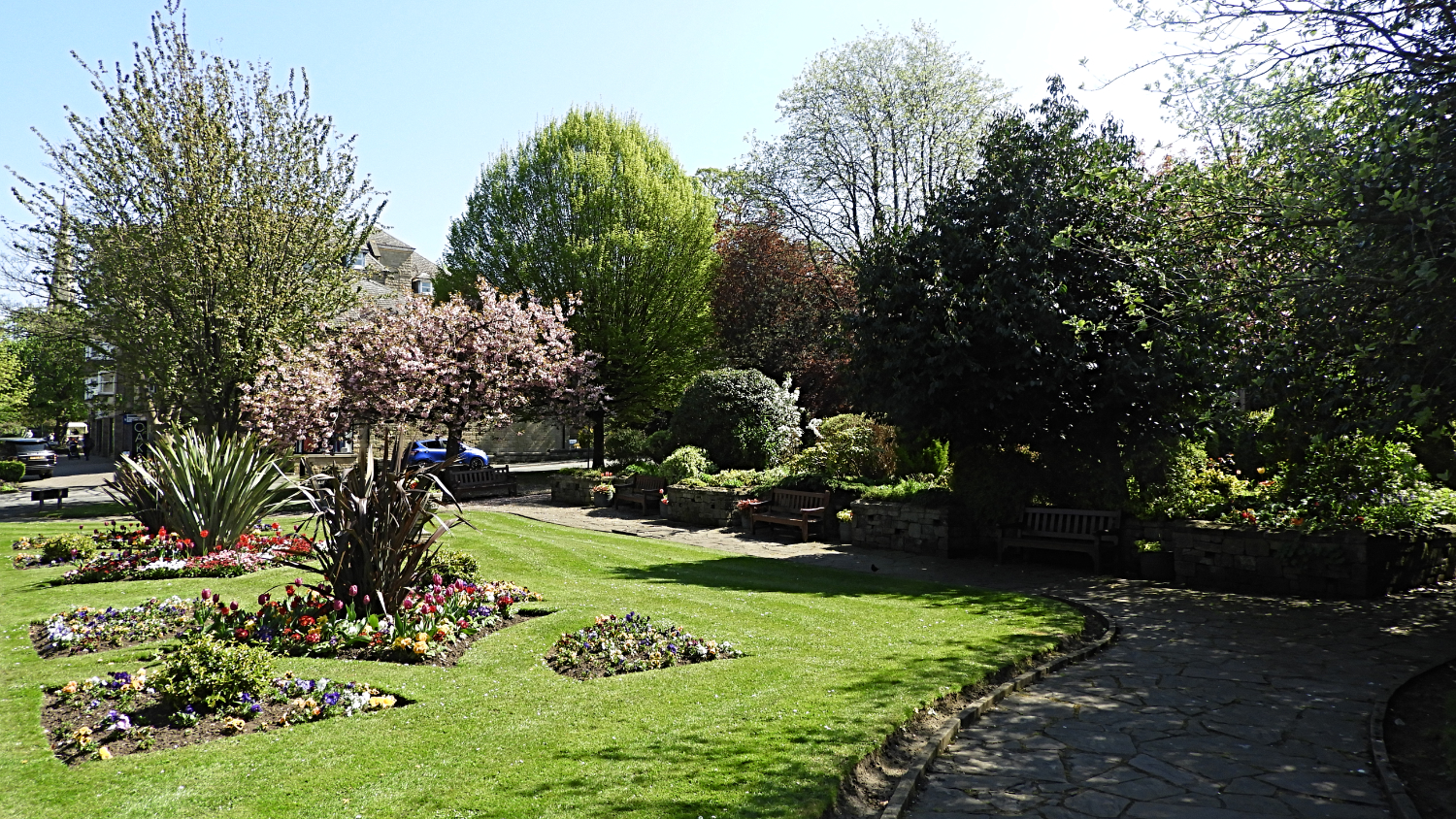 Next up on the walk was part two, the walk into town and lunch followed by an explore. First we climbed to Middleton Avenue cum New Brook Street to cross Ilkley Bridge, a nostalgic place for me as it is where I have started my two Dales Way walks, the first in 2004 and the second just two years ago in 2020. From here we climbed from river to town, passing All Saints Parish Church and carefully crossing heavily trafficked Church Street to reach Brook Street. Then it was lunchtime which we thoroughly enjoyed in one of the local cafes. Still in April, it was warm enough to enjoy lunch outside for the first time in the year which was a thrilling bonus. Afterwards we enjoyed a separate bit of him and her time. Lil took to the clothes shops and I explored the parks local to the Grove, including Memorial Gardens and the parkland around Ilkley Bandstand. Sheltered cherry blossom caught the eye, as did late Daffodils and arranged Tulip displays. It was all very nice. 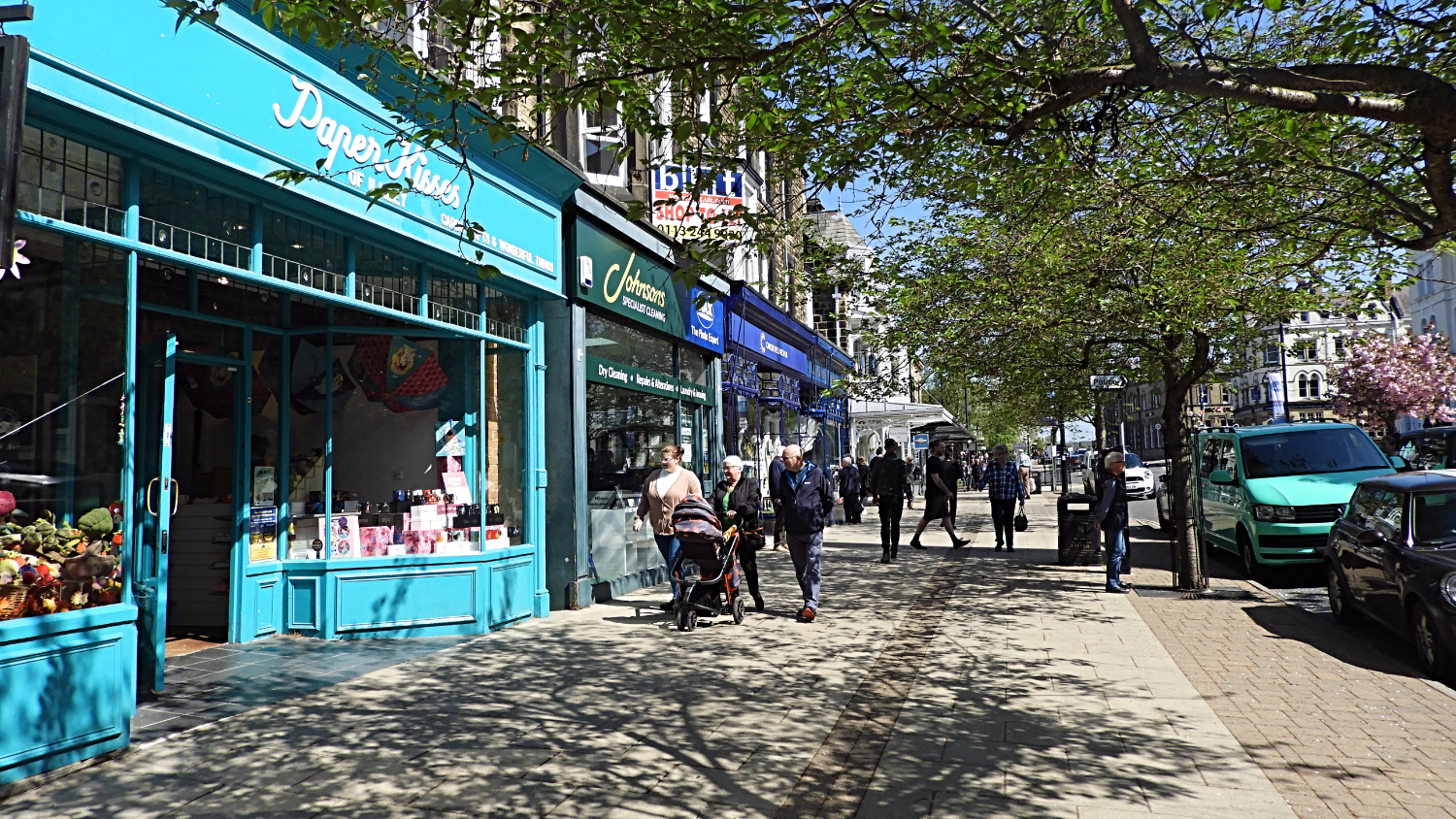 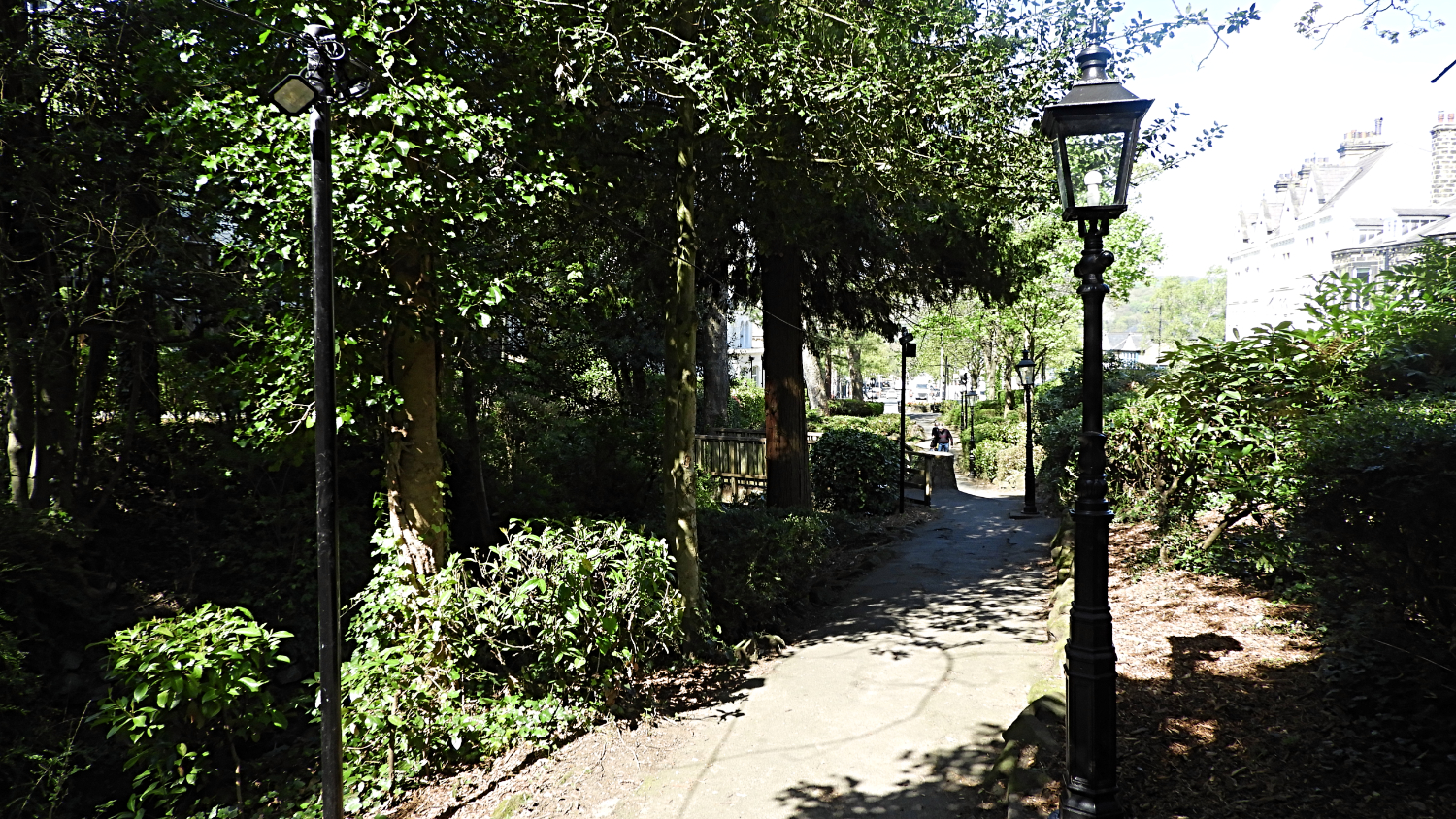 People were thoroughly enjoying the day. Young families were having fun in the parkland. A mum was photographing her children with a backdrop of burgeoning cherry blossom. When they behaved and smiled for the camera that is. It took some time. Both mum and I laughed at the effort. Others, of all ages, were queuing at the Ice Cream van beside the bandstand. And more were ambling along the promenade of shops along the Grove. Including Lil who popped in and out of her chosen ones at her leisure. Still not sate with her shopping, I wandered across the road to wander in Mill Ghyll. Here it was quieter with just the odd folk walking through. Mill Ghyll is a delight, an oasis of green between the urbanisation of Wells Walk on one side and Wells Promenade on the other. Billy Well's Spout, coming off Ilkley Moor and flowing down to the River Wharfe tumbles through Mill Ghyll, a lovely haven of beautifully arranged Victorian gardens. It is so beautiful and a joy for me to walk through. Thanks Lil, for the extended shop. I may have missed this otherwise.

(Note: I recommend you take the time to amble up and down Mill Ghyll during this walk). 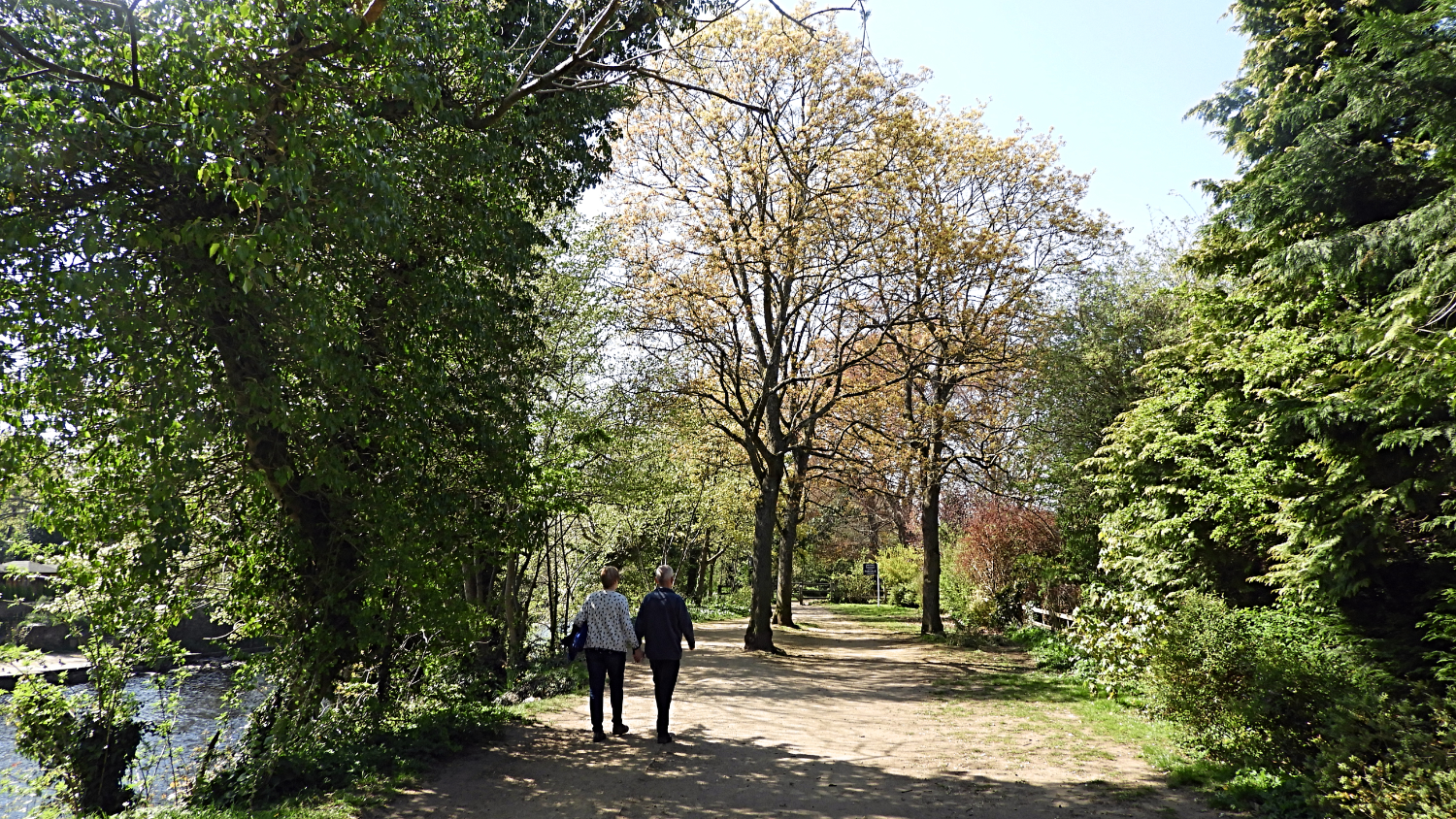 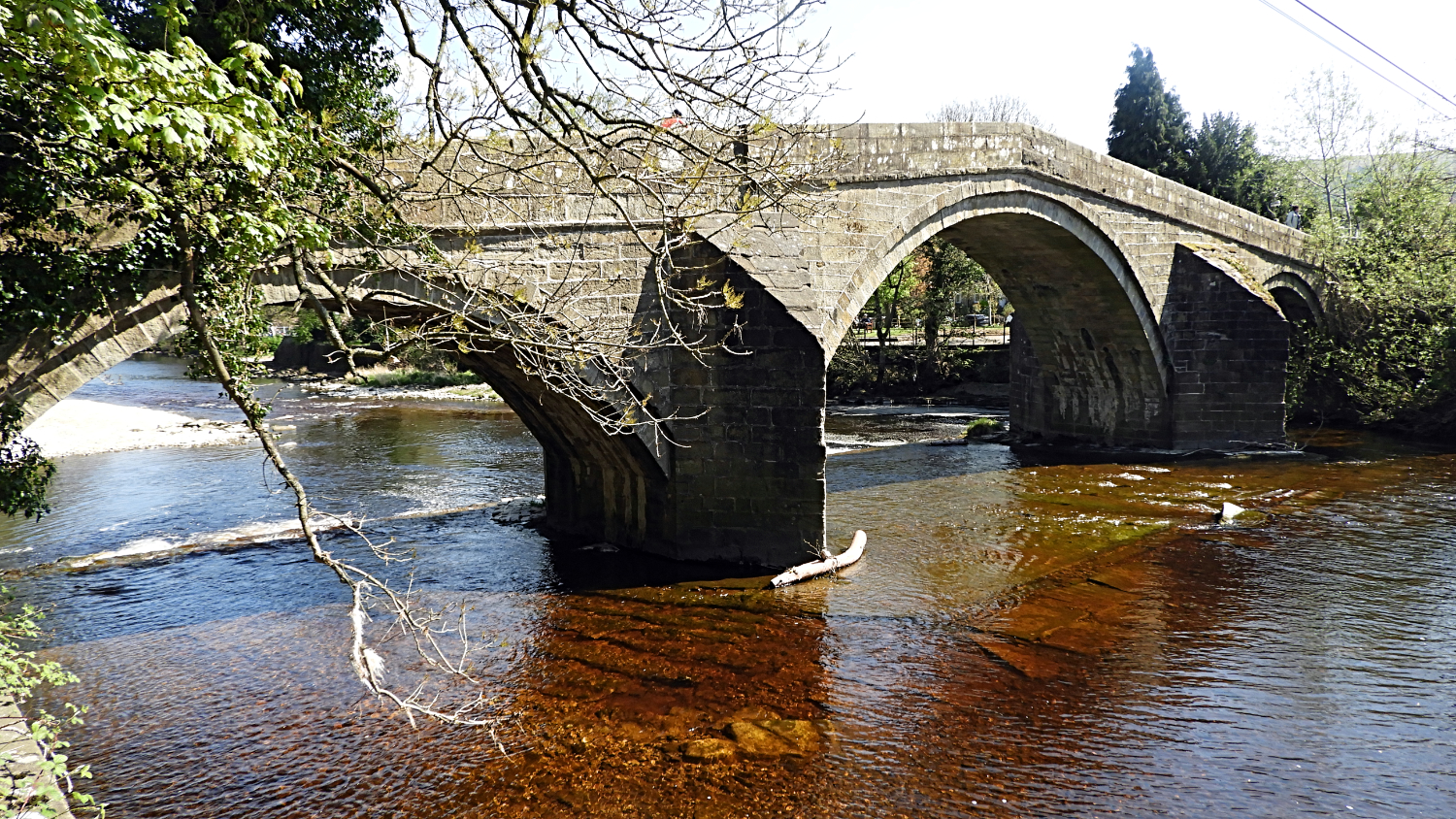 Eventually the time came when Lil had exhausted her shop browsing and then we reconnected to finish the walk. We did this by crossing Church Street carefully once more and finding access to Ilkley Park and Riverside Gardens by way of the Sanctuary, Castle Yard and Bridge Lane. Down to the river we went and then after crossing Ilkley Bridge once more we followed a lovely riverside walk to the Old Bridge. Here people we stood on the bridge watching Mother Duck caring for five Ducklings on the water. They were having fun exploring their new world. We also watched a Pike on the other side of the bridge, just lurking in the shadows. "It is always there. The same spot every day" said one local. We watched the Ducks and we watched the Pike for a while longer. And then we watched the river flow for a minute or two. The perfect end to our delightful walk.