“Don’t forget to apply for a Sri Lanka visa if you’re headed there. The visa can be applied for online, so you won’t need to go to the embassy or anything.”

Sri Lanka is home to many wonderful and amazing walks and hikes, but unfortunately for many people it is beyond their budget and generally people head to Sri Lanka to either celebrate a marriage or on a whistle stop tour of the cultural North. Yet for those who dare to adventure and head South to the so called hill country, they will be rewarded with some of the most beautiful views in this part of world and will find themselves in a rural paradise dotted with nature at its best and on some of the most accessible hikes across Sri Lanka and the Indian Subcontinent.

At the heart of the hill country is the main tourist draw of Nuwara Eliya (I will write up a walk in this area in due course) sadly, this is as far as most make it. But stay on that rustic relic of a train held together with nothing but hope and continue for another couple of hours through tea plantations and dodgy bridges filling gaps between Terra Firma and what may seem like eternity and you will find yourself pulling into one of the most picturesque and almost British like villages in Asia - Ella. 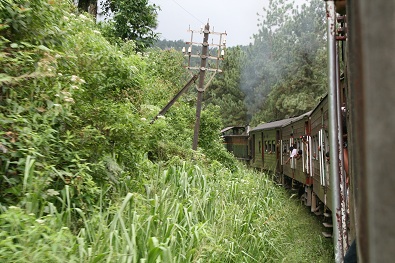 The train to Ella cuts deep into the island 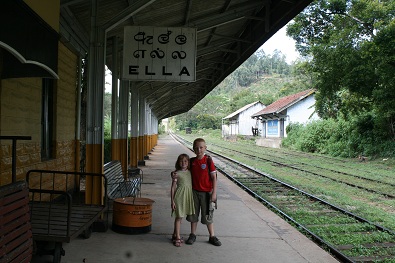 Well off the tourist trail - We made Ella :)

Ella is a tiny place that really consists of one main road with the railway station, which is just a shed at the top and then a few hundred metres down the gentle slope forks off. The left heads up toward Little Adam's Peak and the road going straight ahead goes on to the South coast some 3 hours away. Dotted on either side of the road are guest-houses and restaurants, though not many. It really is an intimate little place. The village is flanked on both sides by huge mountains and at the front right is the renowned Ella Rock, a stunning cliff face rising intimidatingly high above the village. The space between the two sides is known as Ella's gap, and through this gap you can see the plains below, it is this famous and absolutely gorgeous view that has encouraged backpackers to venture this far East for years.

The climate is one of most temperate in Sri Lanka and sits at a steady 26 degrees with a gentle breeze daily. The skies are usually blue and everyone that lives in Ella is proud of the beauty and tranquility that the village provides. It is therefore unsurprising that the main draw of Ella is the natural beauty that the village is set amongst. Whichever way you radiate out from the village will have you amongst stunning walks (many of them untrodden) but the premier hike is the trek up to the behemoth rock peering out over the village and defying gravity over the gap. Optically mesmerising yet mercilessly genteel, I knew we had to give it a go. 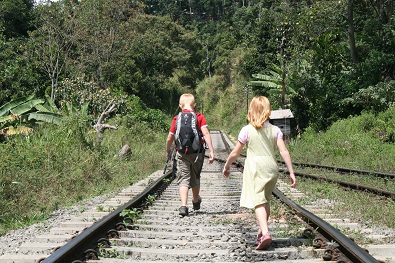 Ella's Rock to the right of the gap 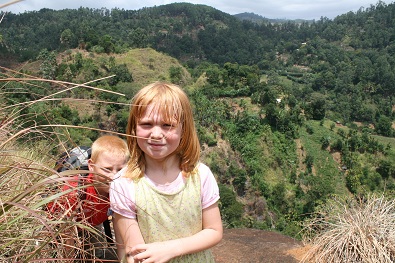 On the morning of the walk we woke up and had a breakfast of fresh bananas, oranges and avocado. The intention was to get ourselves ready for the days hike. We were of course going to climb Ella's rock which sits at around 2000m, Ella sits at 1000m and so the prominence of the mountain, or the climb, was some one thousand metres or 3300ft. That is comparable to heading to the Yorkshire Dales and climbing Whernside, Ingleborough and then giving up halfway up Pen y Ghent all in one go. Or climbing England's highest mountain and a bit. Yet climbing Ella would not be so much of a trek, as a curious ramble through plantations and local villages, all of course skirting a steep gradient. Expecting to be back for a late lunch we set off.

We had no map, but could see where we needed to be, we had brief directions and so headed to the railway station. We jumped down onto the rails and started walking South along the railway lines. I had checked the train situation and we had about three hours before the next one came. As we walked along the lines it was special. We found ourselves alone and we just plodded along at our own pace. For the kids the whole 'we are walking on railway lines' was great for them, for me I relived a long time favourite movie in the form of 'Stand By Me' Almost immediately the track is flanked on both sides by lush greenery, monkeys are seen swinging around and the sound of nature in all its glory rings out. The walk along the railway lines is roughly a mile, but we really took our time. Humidity had picked up and we had finite amounts of water so we paced ourselves. 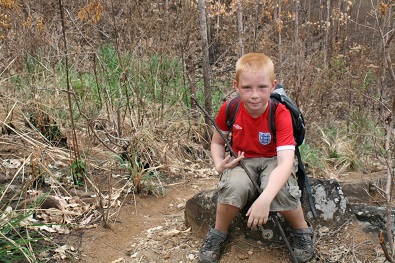 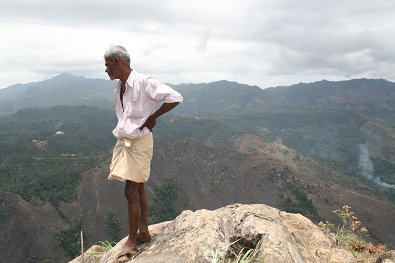 The walk continues until you get to a rickety bridge, from there you descend down the left hand side (there is a little track) which comes back on itself and places you looking down the 100 metre drop from the top of Rawana Waterfalls. It was a sight behold, we then continued on and got lost. I just could not fathom out where we needed to be. The track becomes a field and the field is filled with chillies, and what looked like coffee plants. The distance is all the same, a mixture of banana plantations, avocado plantations and tobacco fields. I couldn't even see where we needed to be anymore as the angle of where we were in respect to Ella's Rock was such that we had no clear view.

Suddenly, Abi (my daughter) spotted a farmer cutting his crops with a sickle. I asked him the way to Ella's Rock and he gestured a way. We set off and got lost again within minutes. We backtracked to the farmer and I asked again, he was trying to explain the way and I just could not understand. So I said to him "I'll give you 500 Rupees (£2.75) if you take us" he dropped his tools, jumped up, slid on his flip flops and we were off. 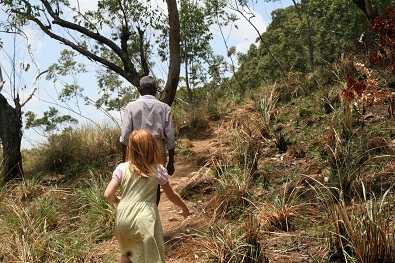 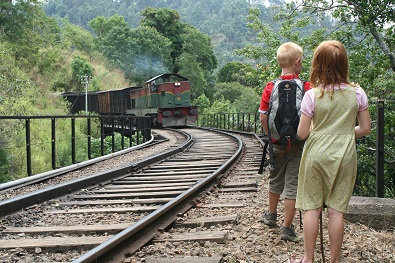 We walked through stunning scenery and every now and again the farmer would pick the plants that were near us and show us them. The journey took us through fields of chilli, tomato, eucalyptus, lemon grass, banana, avocado, Jack fruit and a huge tea plantation. We also saw some Venus fly traps and smelled the root of a plant that makes wintergreen. The walk was quite difficult and the ascent steep in parts. But every now and again you walk past shacks which seem almost uninhabitable, but there will be some bloke working away, tired from years of hard graft, kids will be up to mischief with sling shots, or swimming in even the tiniest collective of water, and women all seem to be carrying a baby in a sling whilst toiling away at a fire. It was rural life at is most poignant.

Eventually the farmer told us that we were near the top and we made our way into a burned out forest. I later discovered that wild boar roamed the forest and they would come down and damage or eat the crops of the local farmers. After the local government did nothing the farmers in unison took matters into their own hands and burned down the entire forest. Tens of square miles of forest all gutted and now marred with a black charcoal and an eery mystique. It was a shame to see such beauty destroyed, but I also could empathise with the farmers and their only means of survival.

After another twenty or so minutes the forest opened up and I could suddenly see for miles, we made a dog leg and the ground before us became mound like as it clearly came to an end. Once at the top we edged out onto the rock - Ella's Rock - The view was spectacular. I hoped my jaw did not drop off the end and the kids and I just gazed in amazement at what lay beneath us and the absolute natural beauty that Sri Lanka held. It is difficult to convey in words such a view, but anyone who has achieved a goal in trekking/hiking will be fully aware that it is not just the view that is the reward, it is everything involved. The sites, the experience, the sound, the atmosphere, the struggle, the belief and the realisation.

And so as we took the cliche breath of success once atop, I felt lucky, the kids felt tired but we were truly rewarded with something special. I had bought a loaf of bread and picked a few bananas on the walk up. As we sat having a picnic some 2km above the plains beneath us it was almost surreal. Except for our farmer cum guide we were the only ones there. The silence and intimacy was almost as amazing as the view. It was as near to perfect as anywhere on earth could ever get. And so silent, it was as though we were frozen in a time warp of paradise flanked by perfection. 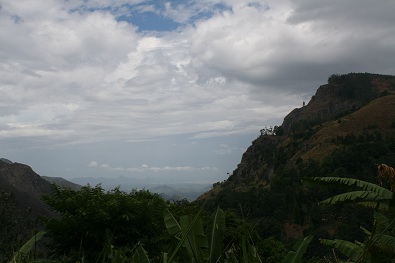 Looking out from the summit 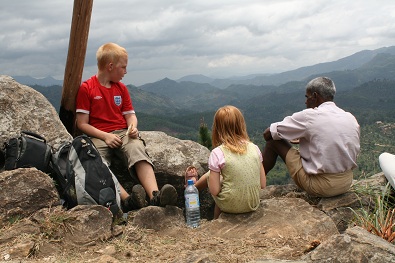 Lunch at the top

The descent was much quicker and despite our guide's efforts to get us to stick our hand in a tree to get some honey it was every bit as amazing as the ascent. We came down a different way and found a different waterfall. The kids were begging me to let them jump in and the child in me wanted to let them, but sadly tropical disease is prevalent in this part of the world and much of it is water borne and so I had to decline their efforts and puppy dog looks.

Eventually we came back to the railway line and made our way back along to Ella. This time we heard a train coming and so bailed into the bushes. The trains don't go particularly fast, but getting a train to the head is a sure fire way to ruin any day and so we waited for it to pass and then walked along. It did not take long for my son Charlie to pipe up "Dad you failed, you said there were no trains" And indeed he was right, I had checked the timetable. "Perhaps it was a late runner" I said, a response that was met with an unconvinced shake of the head. Once at the station I investigated why the train had come and it turned out that only major trains are listed on the timetable. Any freight or local trains are not timetabled and just run at will.

Before long we had made our way back to Ella railway station, climbed onto the platform and made our way back down into the village. As we walked with the station to our back we could see Ella's rock in the distance, and I had a quiet smile to myself that yet again we had set ourselves a goal and achieved it. And really it was not too difficult, but I wondered if leaving without a map was arrogant and perhaps a touch silly. But then we set off on an adventure and getting lost and trying to find our way was all part of the fun. Finding a farmer willing to help us out added a whole new dimension to the day and I have to admit, a map might have made things a tad bit organised on a day that was screaming for adventure, experience and the thrill of a tropical hike set to little more than a nudge of which direction to walk in.

Back to World Walks Homepage