Summary: This walk which I did with my brother Dave on a wet autumn day in Autumn starts from Reeth Bridge in Swaledale. The walk is relatively flat for the first third as we follow the River Swale to the site of a 12th century nunnery, namely Marrick Priory. Then a steep 100 metre climb takes us from the valley floor to the dispersed hamlet of Marrick, followed by a respite from climbing as we track roads and across fields to Reels Head before climbing by road and track along Fremington Edge. The final kilometre is a thrilling 250 metre descent back to our starting point. 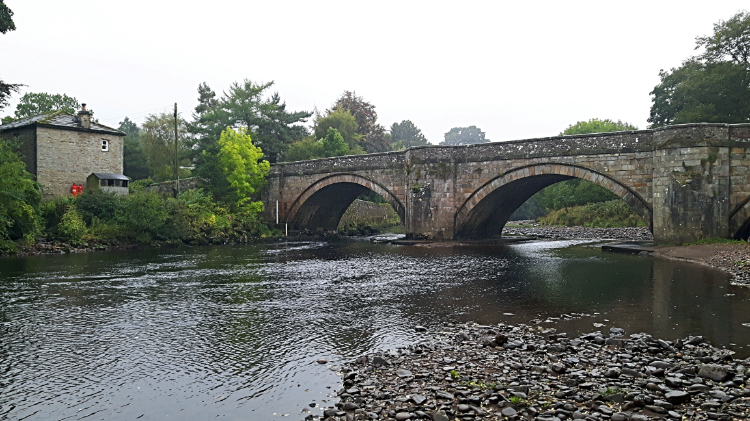 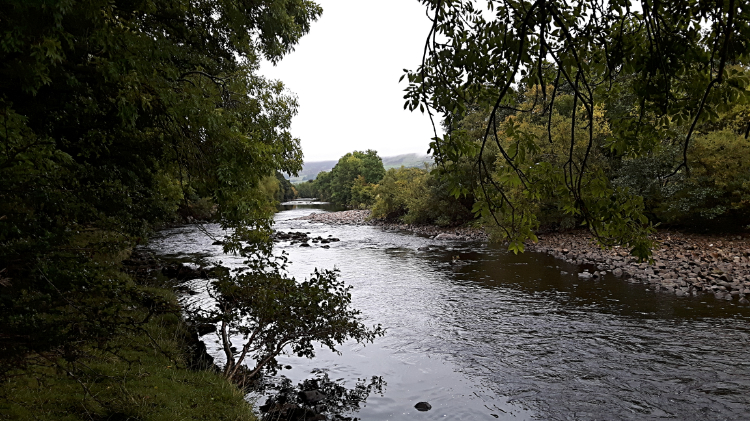 My brother Dave and I were staying in Reeth for a late Autumn break with our good pal Steve and his wife Jan. Just a couple of days ago we had enjoyed a walk of Reeth, Grinton and Low Fremington on a lovely fine mid October day. There was no hope of that this time, rain forecast to spill out over Swaledale all day. With such a bad day forecast Steve and Jan took the opportunity to visit family. Dave and I were determined on a walk. Whatever the weather threw at us. Suitably attired in all our wet weather gear we set off from Reeth Bridge, following the popular path across stock fields to Grinton Bridge and from there we continued east following the north bank of the River Swale, toward Ewelop Hill. Despite the clag and the rain a Heron persevered with its morning vigil of standing in the river waiting for a bite. The bird stood very still while we watched, no breakfast arriving for it during our observation. 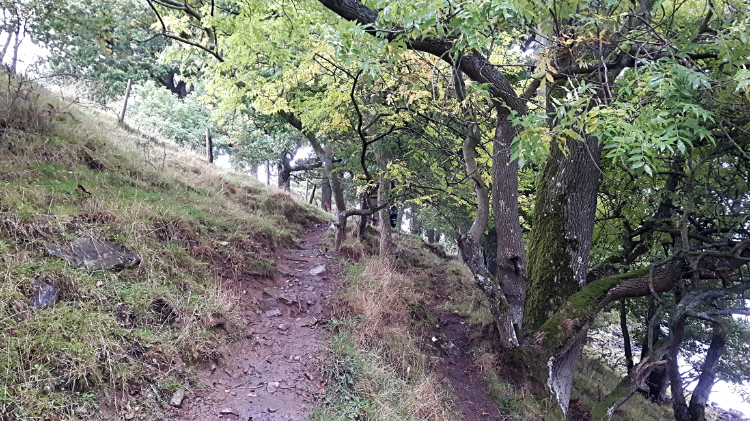 Climbing from the riverside near Ewelop Hill 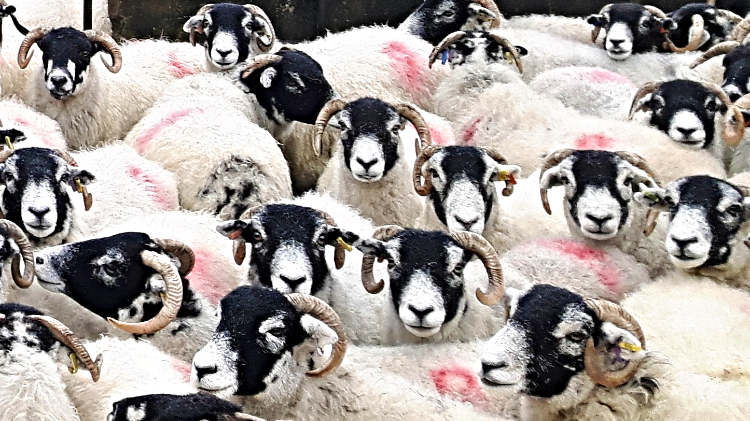 The gang of sheep at Marrick Priory

It had not been a bad part of the walk ambling on the riverside between Grinton Bridge and Ewelop Hill. Avenues of riverside trees had kept the worse of the weather off us and the staccato rattle of raindrops hitting the water had provided a lovely natural sound. Despite the soaking from above, if sheltered, the sound of rain crashing to ground can be quite soothing. I have sheltered many a time with rain falling all around and always enjoyed the moment. I have also cursed when forced to walk with head down because of the rain crashing. But today was our choice to walk so all was good. At Ewelop Hill we left the riverside to cross the minor dead end road leading to Marrick Priory and then we crossed a series of lush valley pasture fields. Sheep were in a couple of the fields, wandering freely and then as we reached the field leading to Marrick Priory we heard a crescendo of baaing. The noise was from more sheep which were tightly corralled in a pen, voicing their displeasure at being contained and not being allowed to wander the nearby fields freely with their mates. 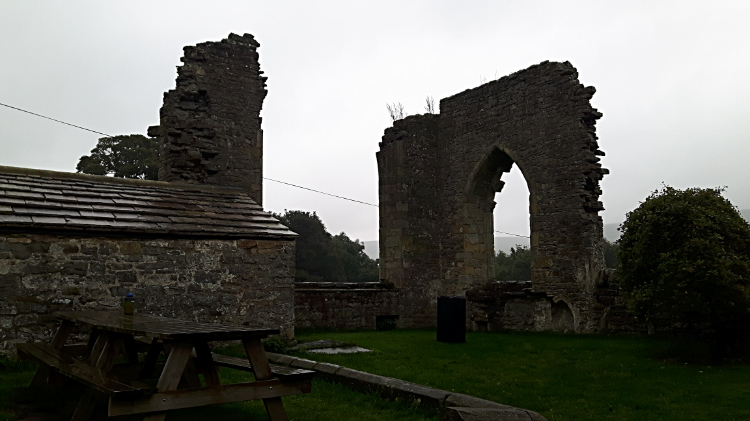 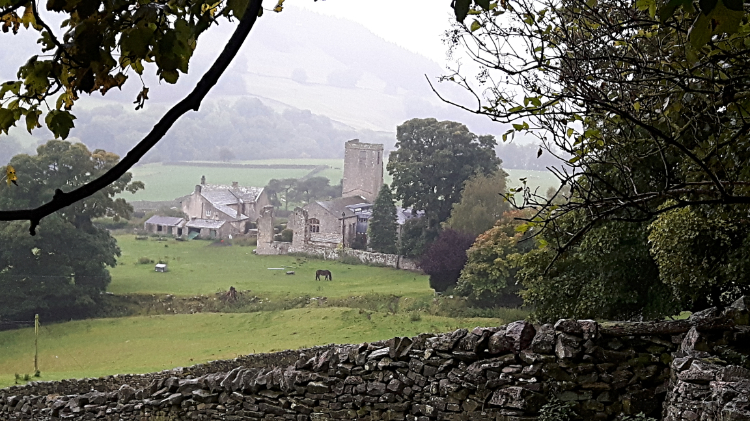 Dave and I had now reached the site of an old Benedictine nunnery which was established for 400 years until the Dissolution of the Monasteries. Now the priory serves as an outdoor education and residential centre for young people, so good is still being made of the site. On this wet day however Dave and I did not see much activity going on. There was a van from Marrick Priory Outdoor Education and Residential Centre parked outside the buildings but nobody was about. A couple of horses grazing in a field beside the priory were the only things on the move as we passed on by the site and approached the first of our two climbs planned for this walk. As I got to the bottom of the climb which heads steeply up through Steps Wood a thought came to me. I said to my brother: "I remember being here before Dave. Twice in fact. The first time was when me, you and Steve walked down through the wood during our first Coast to Coast walk in 1994. And the second time was when I climbed up through this wood on this very path with Deke during my second Coast to Coast walk in 1999. Just after Deke and I had waded across the River Swale!". I always find it amazing, and heartening, when I reach somewhere and enjoy a moment of deja-vu. Recalling lost memories of being somewhere as beautiful as here is always good. And despite the rainy day, being back in Steps Wood was great. 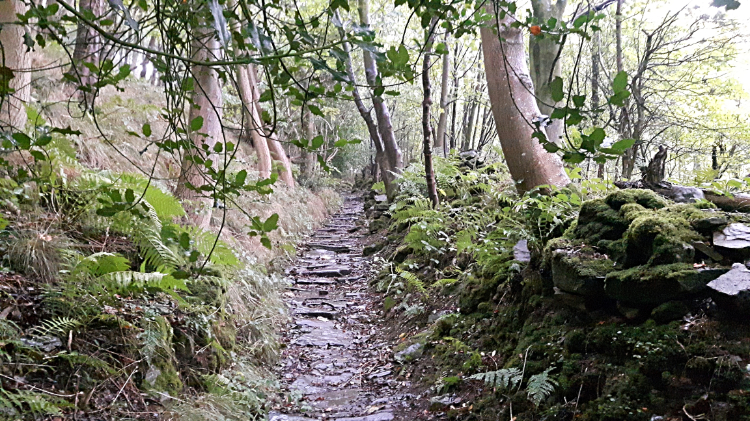 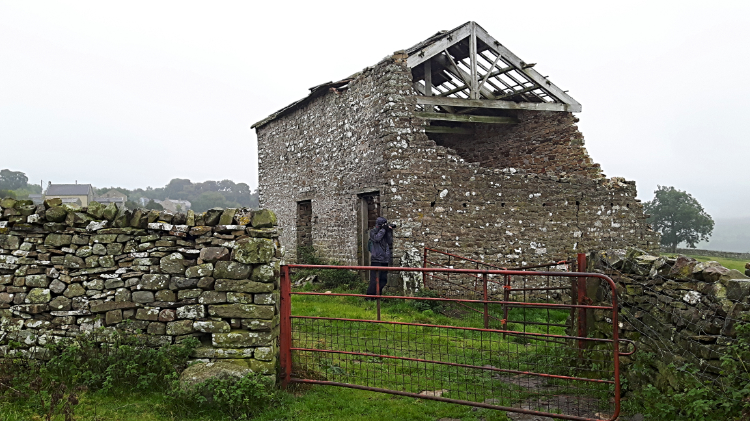 Yes we had to climb through the wood and yes the climb was steep. But we were sheltered in the cover of trees in Steps Wood and we were in no hurry at all. We had all day to do this half-day circuit of mid Swaledale. Time to dally and discover. Time to rest and take in the beauty of the surroundings. And so we did on the path climbing up on the 120 metre ascent to the village of Marrick. Half way up we stopped to rest, have a drink and share a four bar Kit-Kat. Might as well dine in the dry! Dave also took time out to photograph the flora of the wood, concentrating on ferns and fungi. Autumn is the time for fungi to flourish and there was plenty beginning to show. Eventually though we had to return to the walk and so after the climb through Steps Wood we emerged into the gloom of the day once more on the approach through a couple of fields to Marrick. A sign reminded us of those halcyon Coast to Coast walks. It indicated 'Marske 2 3/4 C -To-C on one finger and Marrick Priory 3/4, Reeth 3, C-To-C on the other finger'. Continuing on through the village, which is more a scattering of farmsteads, cottages and the odd bungalow, we reached a road junction where a group of three bedraggled Coast to Coast walkers were hunched over, trying to work out the direction of travel on their Cost to Coast map. "That way" we told them. 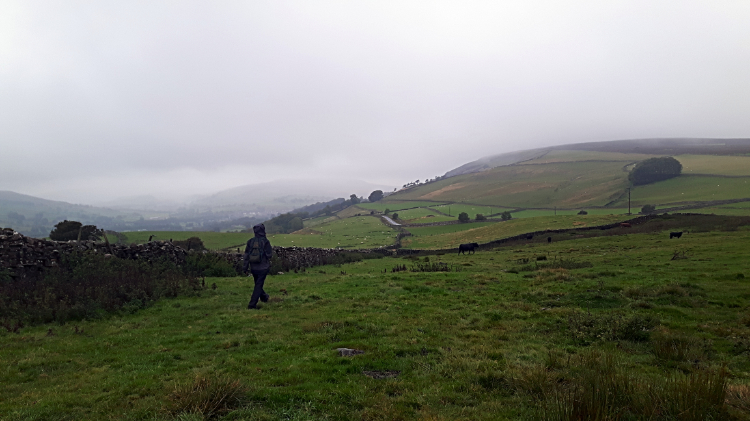 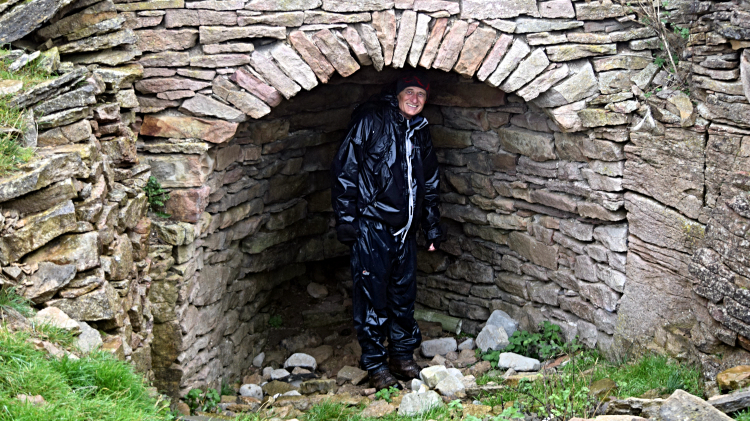 Finding shelter in disused mine workings

Once out of the village Dave and I stopped by a field to observe the spectacle of a flock of Starlings all assembled in two long parallel lines on a telegraph wire between two posts and more on a triple parallel on another telegraph line. We worked out there must be about 1,000 of them. Spooked by us as we crossed the field on our way to Marrick Barf they all flew off in assembly though I don't think we could claim to have seen a proper murmeration. Their flight was direct, over the low moor and away. On our way across Marrick Barf and then across Garnless Scar at around the 300 metre line we passed the site of numerous disused mining works. Looking at the map there were Quarry (dis) and Shafts (dis) strewn all around us. One old working of either a closed hush or kiln provided a good temporary shelter from the rain which continued to fall. It had not stopped all during our walk and it was showing no sign of relenting. In fact as we got higher it got worse. And we were now on our way to the highest point of the walk on Fremington Edge. 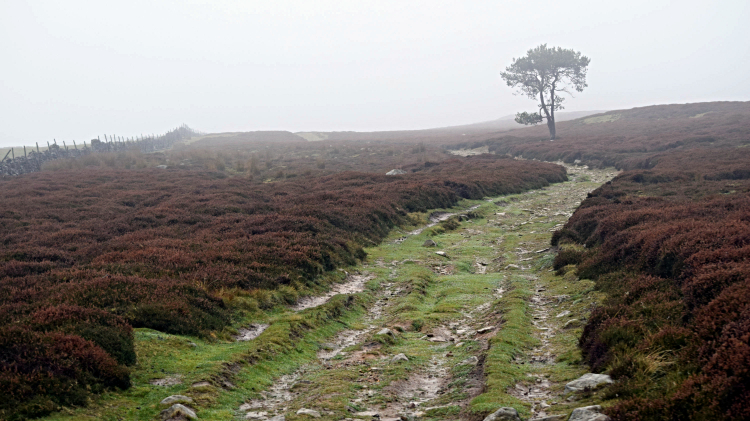 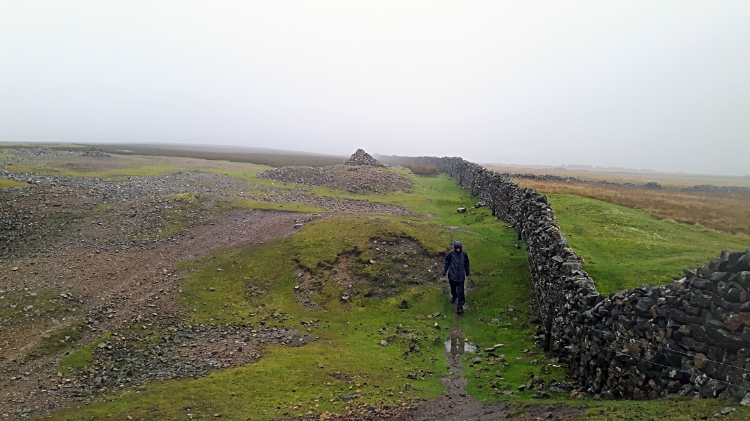 Disused mine workings on Fremington Edge

The climb to Fremington Edge by way of roadside of New Close Bank, took us to the 324 metre mark but we were still more than 100 metres from the top point of the walk. This we would achieve by tracking across Fremington Edge from east to west. As we steadily climbed we knew that on a good day we could now look down on the rooftops of Reeth. It was not a good day. So we focused our attention on the features of Fremington Edge. There was the odd lonely Rowan tree but not much else in the way of foliage. The ground covering heather had lost its late summer blossom, fading to burnt brown. But most prevalent of all on Fremington Edge were the many signs of redundant mining activity. Everywhere we looked the ground was scattered with remains of old Lead mines and there were many disused shafts and spoil heaps all over the place. Such was the devastation that even now nature is finding it difficult to reclaim any kind of hold. The spoil is that corrosive that heather, fern and even hardy Rowan cannot get a hold. At least the stones of the spoil allowed for the rise of cairns spread at regular intervals for those lost in the mist of the moor. We didn't need their help though, we were now going down. 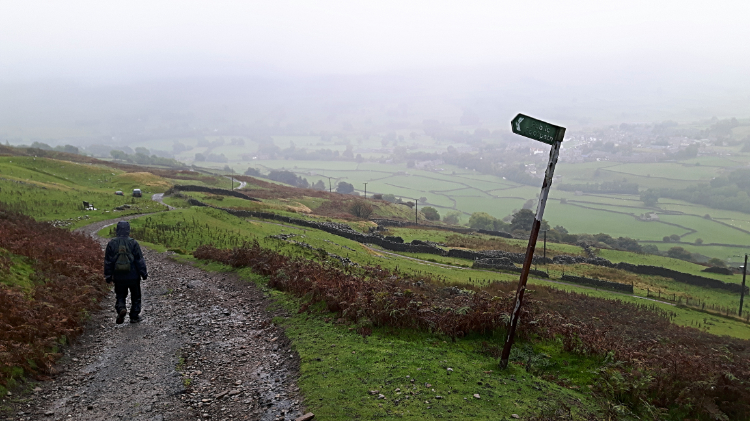 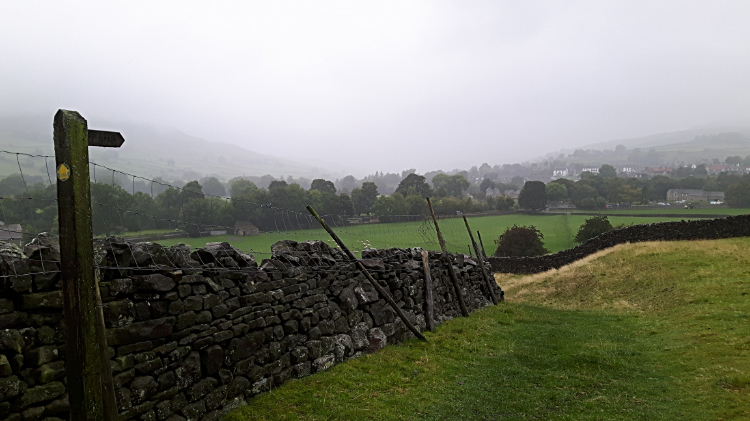 The way from High Fremington to Reeth

On the course of our walk Dave and I had climbed 280 metres in altitude. We had done that over five miles and now we had to lose it all in just one mile. Thus it was a steep descent from Fremington Edge but at least we had hard track and road to follow nearly all the way down to High Fremington. After taking a short break on the seat dedicated to Harry and Edna Beardshall we made our way safely to the bottom, steep though it was all the way so we could not relax too much. Anyway we got home, got back to our accommodation and then we dried out.

There is no doubt Dave and I would have enjoyed, and appreciated this walk more on a dry day when we could have taken more time and enjoyed the local scenery. But it wasn't to be. Still, the stretch along the River Swale had been fun. And the memory of previous visits to Marrick Priory on long walks an evocative reminder. The walk through Steps Wood was brilliant. Despite the effort. The flock of Starlings. A great encounter with nature. The walk in industrial history. Always fascinating, especially when I looked up that Chert Mine was all hard underground graft. Tough old days they were. I do hope those who worked hard days there had some time to relax in the beauty of Swaledale afterwards. Always beautiful, despite the weather.