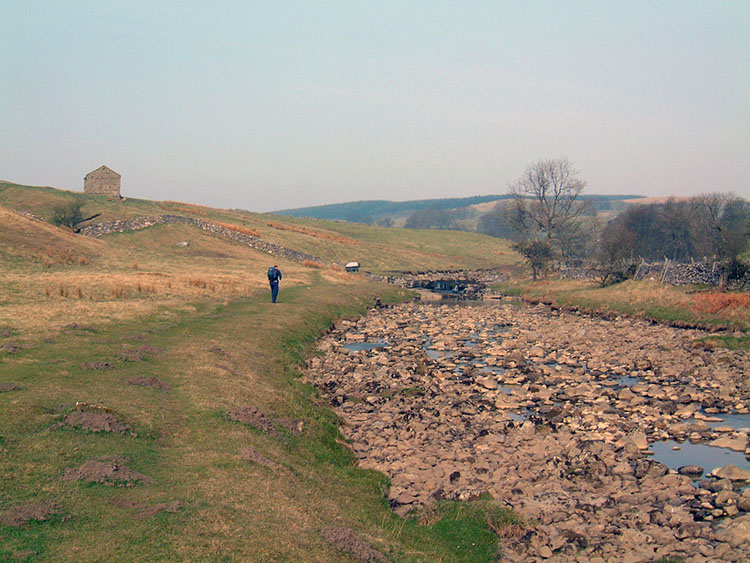 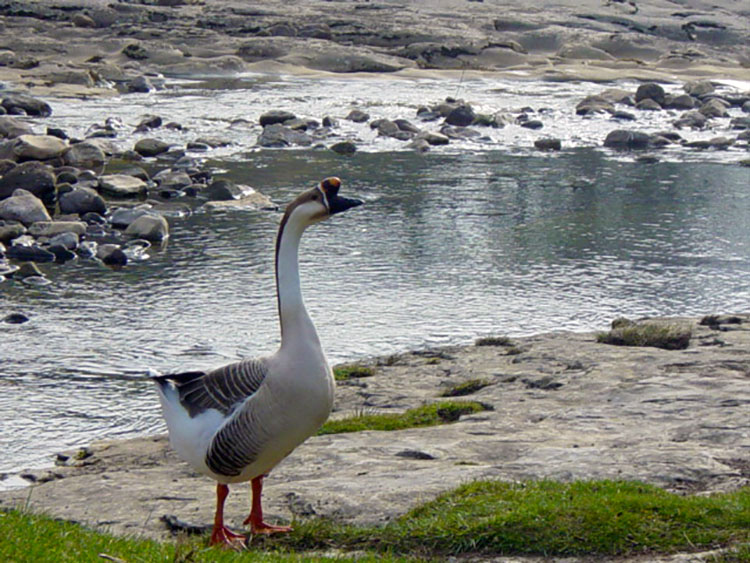 Today we reach and go beyond the half way point of the Dales Way as we leave the River Wharfe behind and cross the dales watershed, leaving Yorkshire behind and entering Cumbria, home county of the Lake District. The day begins as yesterdays ended in Yockenthwaite as we walk along the now beck like Wharfe. We walked the first few miles alongside the river as we headed to the hamlet, or few houses that is Beckermonds. Apart from the trickle of the river and the occasional vehicle on the quiet nearby road we enjoyed a peaceful passage except for the occasional wildlife interlude. Dippers were seen on the rocks at riverside on a few occasions and we saw ducks on the river, as we had on every day so far, usually in pairs as they are in the springtime. There was one notable event with the ducks as can be seen in the first picture of today's walk. About a mile out of Yockenthwaite we came across three unusual waterfowl. It became soon became apparent it was a family group of parents and sibling but these were not of a type usually seen. The male had a protuberance on his beak and as I was to find out, was very protective of the others . As I tried to get closer to take photographs he came out of the water to chase me away. He was coloured whereas his partner and the young one were white with bright orange beaks. Internet research has led me to believe that we had an encounter with Chinese Geese. I am glad we met though and I went back to see them again on my way home after the walk. This time it was noticeable that the young one was enjoying the company of common ducks. As before the male kept an eye on me. Back to the walk and after the wildlife break Steve and I continued on through Langstrothdale. 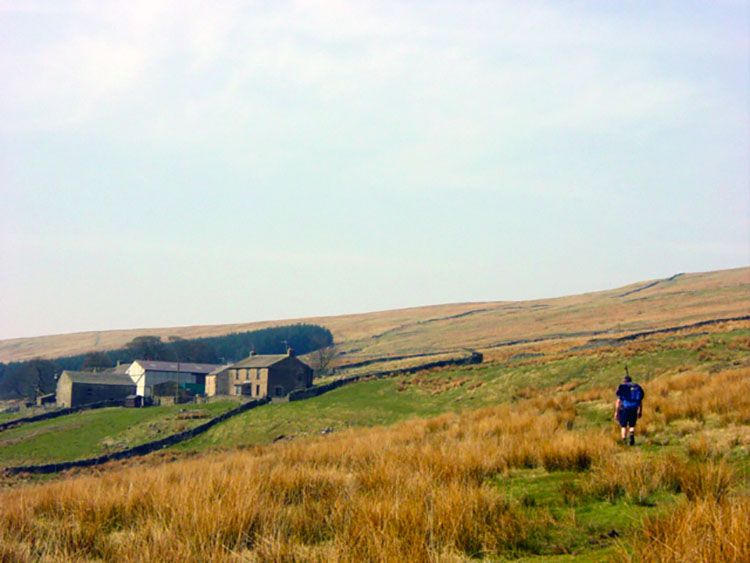 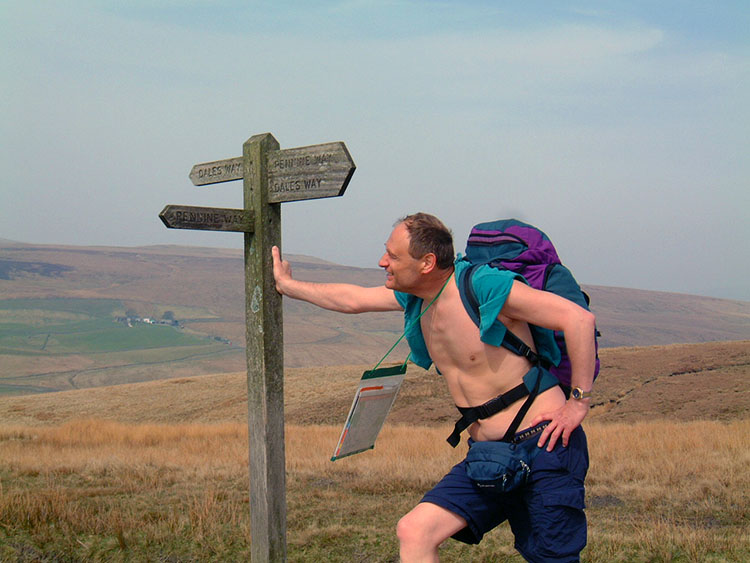 It was a hot day on the Dales Way

After Beckermonds we crossed the river, turned north and left Langstrothdale along the road to Hawes and over a stiff little climb before dropping into Oughtershaw. After the village we turned off the road and headed north west and then due west firstly near to Oughtershaw Beck, the main feeder for the Wharfe which is now gone, and then onto open moorland. Over the next few extremely quiet miles, for there is nothing but a few well spread out farmhouses here, we climbed 100 over 100 metres to the heady heights of 520 metres the highest point on the official Dales Way path. This section of the walk to Cam Head whilst over wide open moorland does close you in a little because all you can see to the right is the featureless Oughtershaw side and on your right conifer plantations. It is a time to make some distance for after Cam Head there are delights aplenty. We stopped at the corner of the Cam Woodlands plantation for food, drink and a short rest after the steady climbing of the last three miles and then climbed just a little further to where the Dales Way and Pennine Way briefly meet. This is the high point mentioned and here we leave the moorland pathway to walk along Cam High Road, a Roman road, all the way down to Ribblehead where the famous viaduct is found. 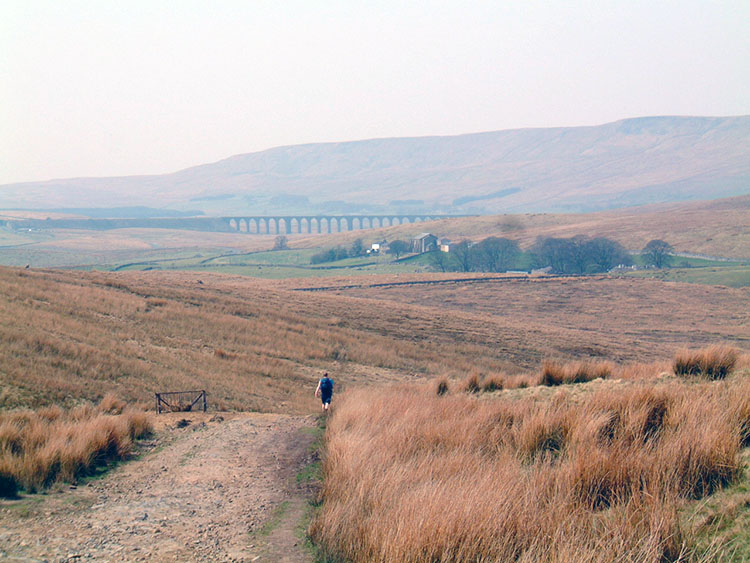 Descending from Cam Fell to Ribblesdale 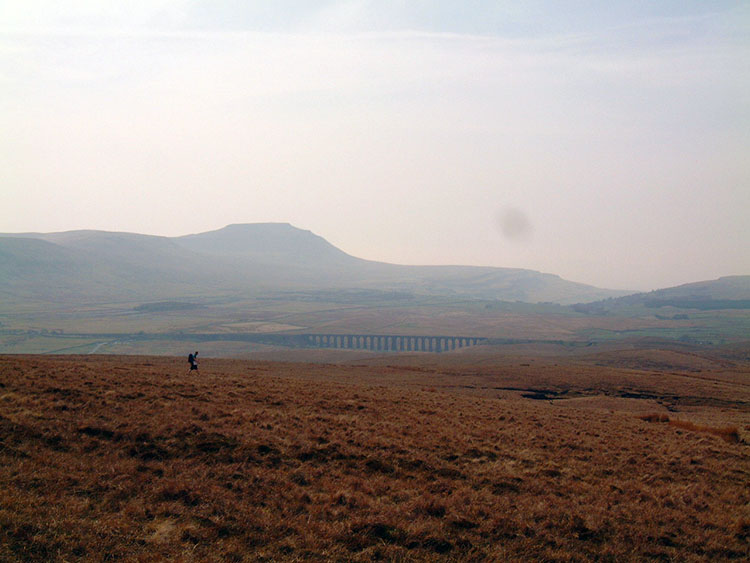 Once we started walking the Roman road towards Ribblehead we gained marvellous views of the mighty three peaks. These three famous hills, Pen-y-ghent, Ingleborough and Whernside are small in comparison to the ranges of Scotland, Snowdonia and the Lake District but ask a Dales walker about them and he will eulogise all day long. The Three Peaks walk where all three are done in one day is a 26 mile endurance test for any walker and the scale of the walk is clearly apparent from Cam High Road. It was a hazy and very hot day; amazingly so for April as we walked down this stretch and it gave the distant hills of Pen-y-ghent and Ingleborough a surreal silhouette. The third man, Whernside was closer to us and was to get much closer yet. Walking down the unmade road to Ribblehead is easy and we made quick time to the bottom at Holme Hill on the B6255 Ingleton to Hawes road. From here the Dales Way follows a due north route via Black Rake Road to Dent Head. This is followed by four miles of road walking into Dentdale an option we preferred to avoid. At the start of the day Steve and I had quickly agreed to seek an alternative to walking down the road. It is the one obvious weakness of the whole walk and one, we feel, with a little effort form the authorities could be much improved upon by creating a path to cross Blea Moor and link to the high level path skirting Whernside. And so began the epic crossing of Blea Moor. 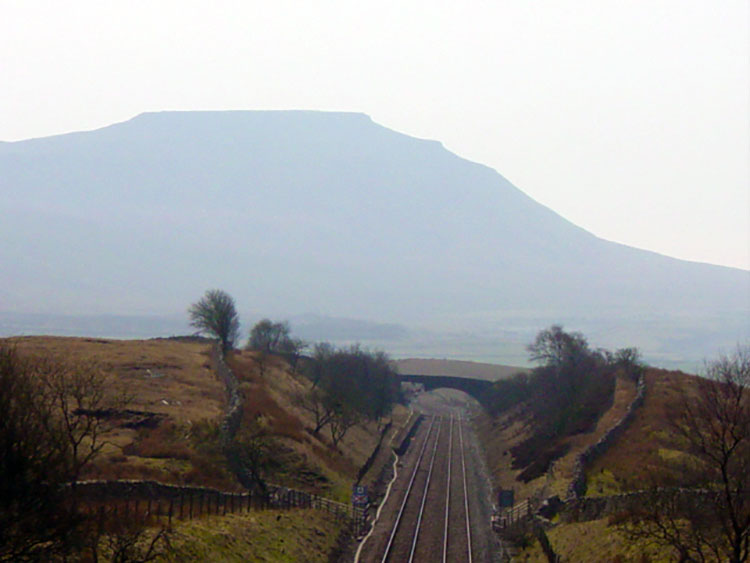 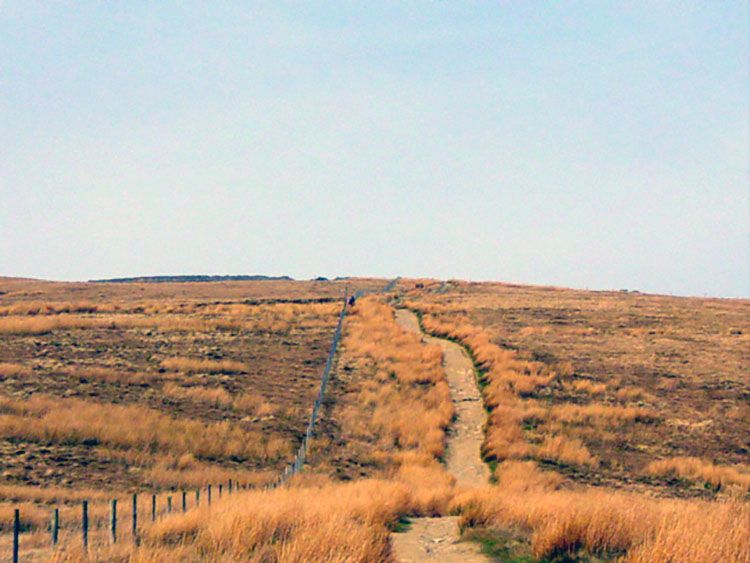 So we crossed the B6255 and followed the Dales Way path to Winshaw. And there we left it as it took a 90 degree turn to the right we headed straight on a north-westerly bearing to meet the Craven Wold Track that skirts around Whernside into high Dentdale. We aimed to meet the track at Smithy Hill (map ref: SD761816) and despite disagreeing on height we walked 200 metres apart in a purely parallel line towards our target. It was tough going over high moor grasses and down numerous sunken troughs but we made our way steadily across. There is no doubt a well made path over here would be of tremendous value to the walk as once the moor is done the benefit is huge. Alternatively we could have walked down to Ribblehead and followed the Three Peaks route but again there would have been over a mile of road. I would rather take the pain for the gain. After a much needed break for fluid we walked up the Craven Wold Track edging Whernside to our left. 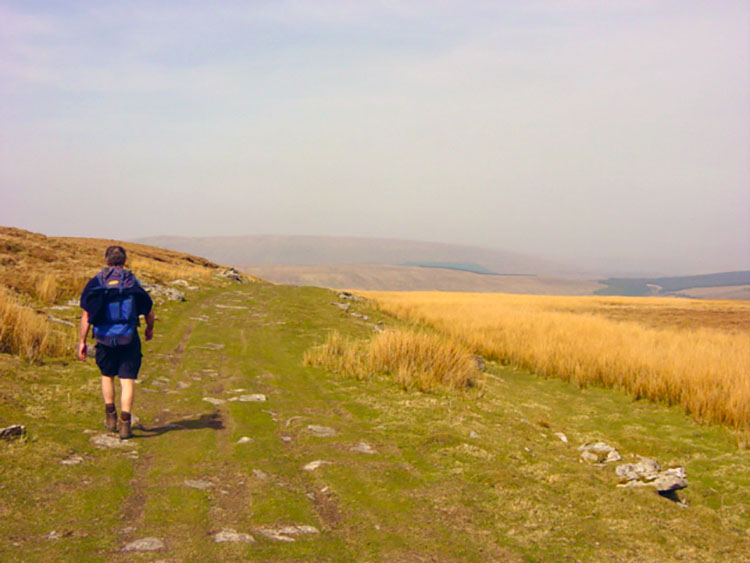 Boot of the Wold 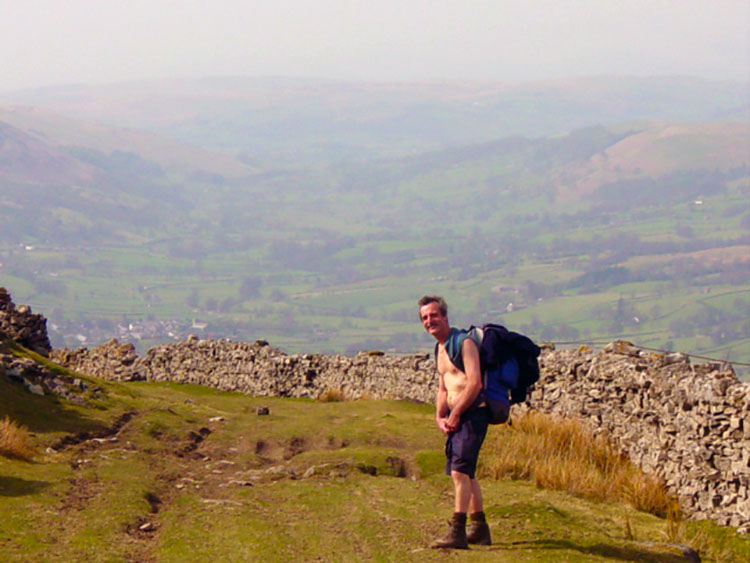 On this section we made our highest point of the walk at just over 550 metres and then crossed over to gain heady views of Dentdale below us. Whereas the official path now follows the tarmac road we enjoyed a serene walk at height around Great Wold to the Boot of the Wold. We took a final break at the high point of the path. 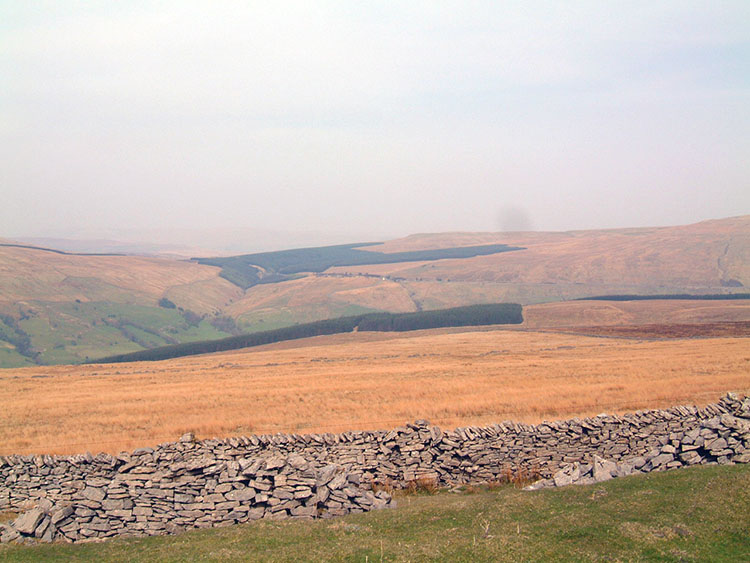 Looking across to Rise Hill 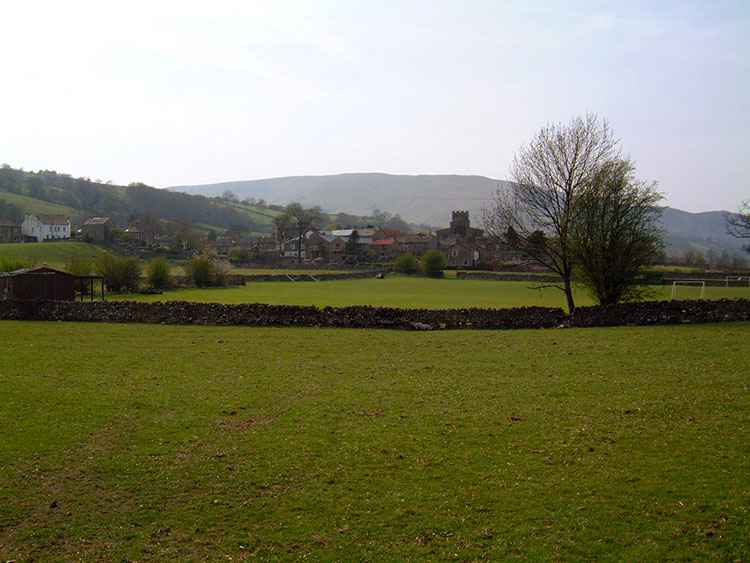 After chilling out enjoying the hazy views during refreshments we rose to our feet and descended into Dentdale. At first we dropped into Dentdale on a gentle slope and then more steeply to Whernside Manor from where we followed a road a short distance to Mill Bridge. Here we rejoined the Dales Way on the banks of the River Dee which we followed downstream towards Dent. We enjoyed the riverside ramble to Church Bridge from where we left the riverside to follow the road into Dent village. 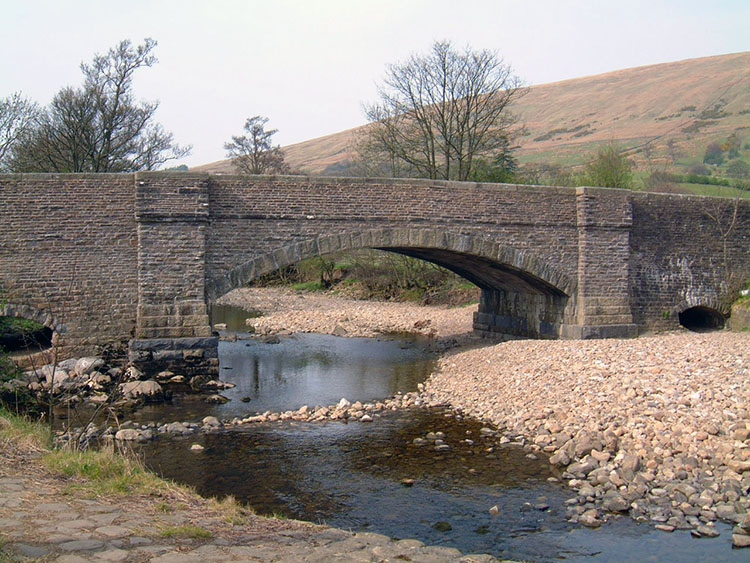 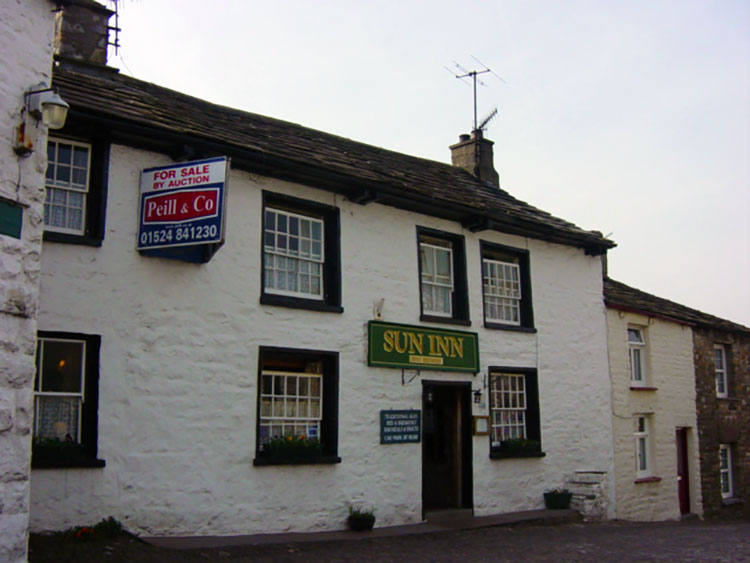 Home for the night

Once we reached Dent we headed straight for the village shop. It had been over 20 degrees in relentless sunshine and we were thirsty, so much that I downed two cans of cold orangeade one after the other. This had been a fantastic day and we capped it with a fantastic night out in the village we know so well from previous visits. We chatted to locals in the evening and did not hesitate to tell them we were loving this superb walk on the Dales Way.