Summary: While this walk is centered just four miles west of the bustling Peak District town of Buxton, it feels much more distant. Certainly when I did the walk anyway for I hardly saw another person all day. It felt as remote as any walk I have done in this most popular National Park. And that is one of the appeals this walk holds for me. Another is the stunning beauty of it for once I had climbed to the high ridge leading from Pym Chair to Shining Tor I enjoyed the most captivating long distance views of a land seemingly devoid of people. It was magic and the rest wasn't bad either. 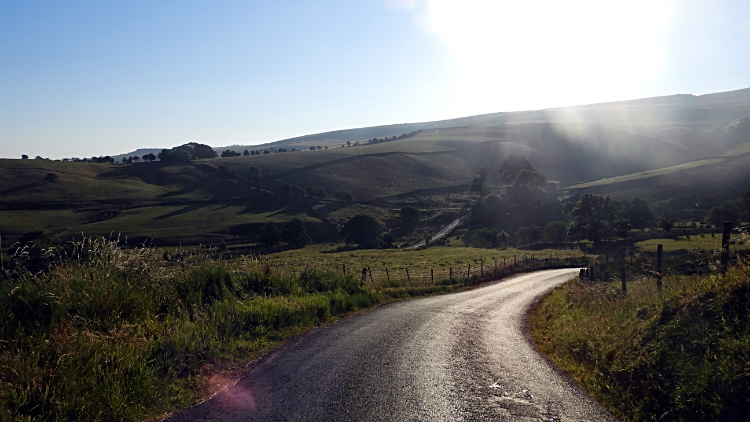 Walking the lonely road at sunrise 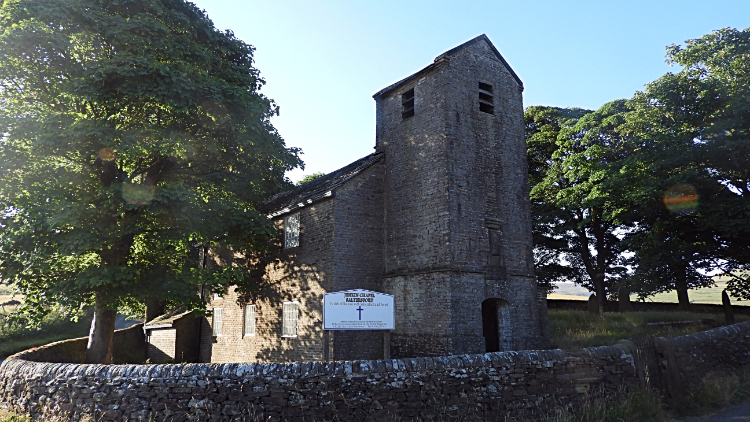 I arrived at the car park near Lamaload Reservoir very early. It was 6.15am as I parked up, keen to make an early start on what was promised to be a cracking sunny day in the first week of July. "Best get the hard work done before it gets too hot" I thought. On my way by twenty past I headed down to Lamaload Reservoir to find the track leading through the reservoir side plantation and fields to Nab End. Could I find it? Could I hell as. I walked up and down the reservoir path to find it and I followed a path leading up into the plantation but it came to a dead end. The path shown on my OS Explorer map simply was not there. I glumly gave up and walked back to the road and started walking up it. I had only wasted fifteen minutes but still I was a little disappointed to be following the tarmac Hooleyhey Lane road which I knew I would now follow all of the first mile to Jenkin Chapel. But hey, as it turned out, the stroll along the road was great. Not one car passed, no farm traffic either. It was just me and the still quiet of an early summer morning. Some birds were stirring, chirping away at the roadside. And sheep in the adjoining fields were beginning with their daily eating. Apart from that the only sound came from my feet treading the tarmac. As I walked along the sun rose above the high ridge to my right and warmed the valley. The very ridge I would soon be walking along. Soon after I arrived at Jenkin Chapel which signalled my first departure from tarmac road. 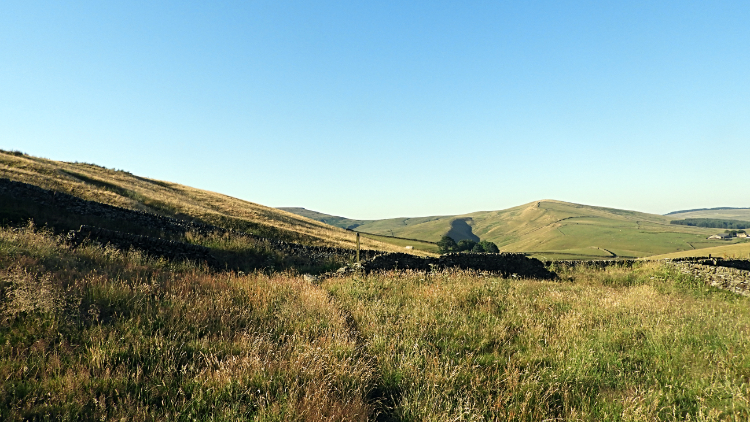 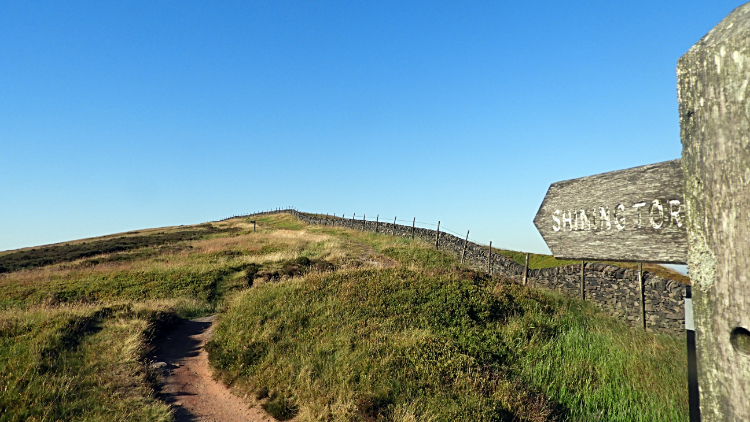 I could have turned right at Jenkin Chapel and simply followed the road up to Pym Chair, passing Pymchair Farm at the steepest part of the entire walk. But instead I took the opportunity to tread the permissive paths over fields to Green Stack, arching back to the road and still passing Pymchair Farm at the steepest part of my journey. It was a lovely diversion, the sheep in the fields keeping a close eye on me as I passed by. This was clearly a little walked path and seeing walkers like me was an infrequent event for them. The house at Green Stack was a gorgeous spot, completely isolated with a pretty drystone wall enclosure garden and pristine mature trees in full summer colour protecting the windward side. From Green Stack I tracked south across a field back to the tarmac road and began the haul up what was in fact still Hooleyhey Lane, which I had followed from Lamaload Reservoir to Jenkin Chapel, to Pym Chair. When I arrived at the viewpoint at Pym Chair there was a young endurance cyclist stood astride his bike and admiring the view. "Just taking a breather while I enjoy this" he said. "It would be rude not to" I replied. 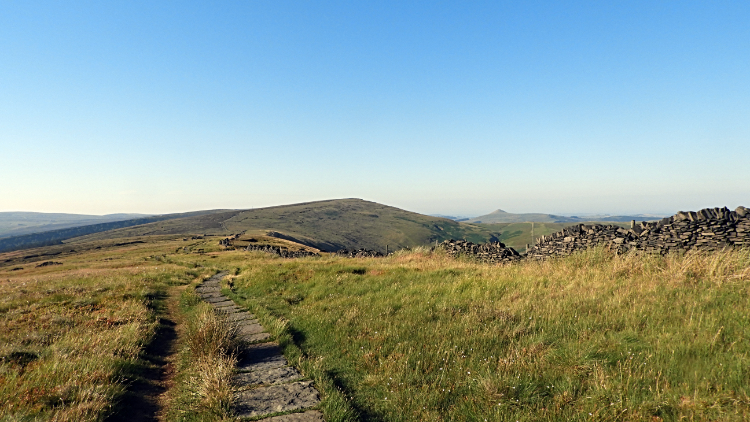 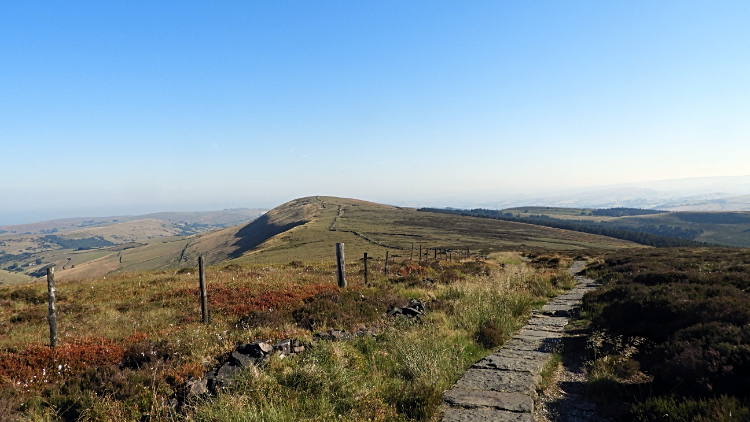 View back to Pym Chair from Cat's Tor

The ridge walk from Pym Chair to Shining Tor is an exhilarating high level stroll of around one and a half miles. I started out from Pym Chair at 7.38am and arrived at Shining Tor at 8.12am. It may have been just thirty four minutes of walking but it was packed with thorough enjoyment. While being early morning with brilliant blue sky and quickening warming the full moon was still blazing down too. I got a great shot of the moon with its crazy paving of craters on my super zoom camera. I also got plenty of shots of aircraft rising into the sky over the ridge. Their take off point at Manchester International Airport was just ten miles north-west of me and they all seemed to be heading south-east towards the heart of Europe. It was not difficult to spot them coming as they roared with full engine power to reach the skies. As I walked along the marvellous ridge I wondered if the holidaymakers on each aircraft could see me as they flew by? And who would be envious of who? I was convinced I was in the best place and turning my attention back to my walk I bounded along with a spring in my step. "Not bad for a sixty something adventurer on an early morning hike. I am not done with this fun yet. Not by a long chalk" I thought to myself. 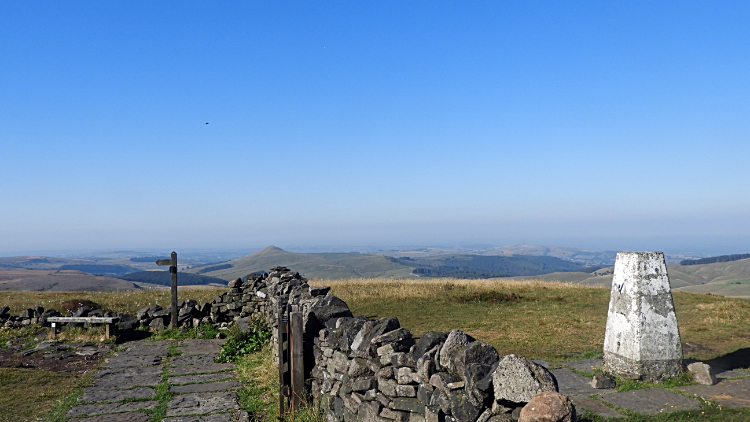 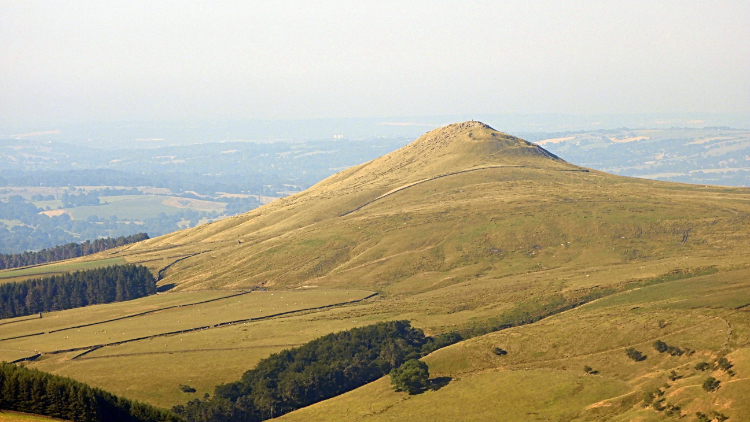 I reached Shining Tor and stood for a good while just taking in the incredible view. The highlight was the peaked summit of Shutlingsloe, standing out proudly three miles to the south. Also in good view, though heat haze was fast forming, were, in a clockwise direction to the west, Macclesfield Forest, Tegg's Nose and the Macclesfield gap. On the other eastern side the mass of Axe Edge Moor dominated the view. A wooden bench served as an appropriate place to take a break. An inscription on the bench read

'From this fine seat admire the view
and give Peak Park Rangers their due
For 50 years of hard work to preserve
Our National Park - Much praise they deserve'. 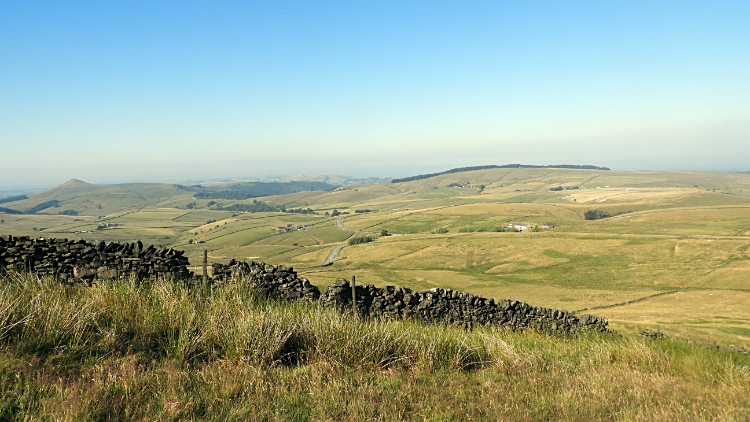 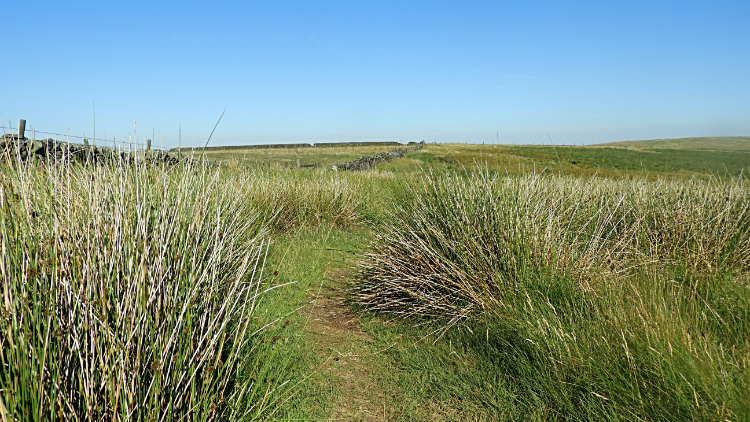 The path to Andrew's Edge

After my break at the highest point, 559 metres altitude, I resumed my walk to begin the return journey, first by taking a sharp 100 metre descent north-west. The climb down to a level of around 470 metres was followed by a high level plateau walk along a path to Andrew's Edge. This passage of walking over good ground and on a good path surrounded by high tussocky grasses was a mile long. It was proper moorland walking and reminded me of similar hight level paths in the Yorkshire Dales. Barden Moor and Cote Moor sprang to mind though this one was a little more managed. So it seemed anyway. The feeling of being out by oneself on the managed outliers of wild moors was just the same though. A middle ground between tame and thoroughly wild. The kind of walking I think of as blooming great. I was in my element here. 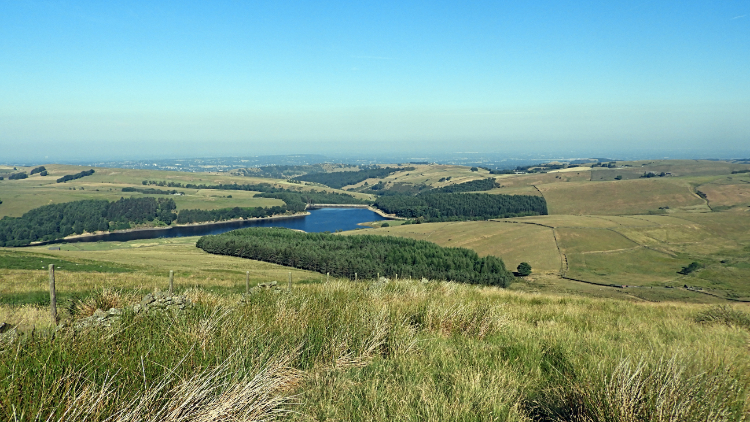 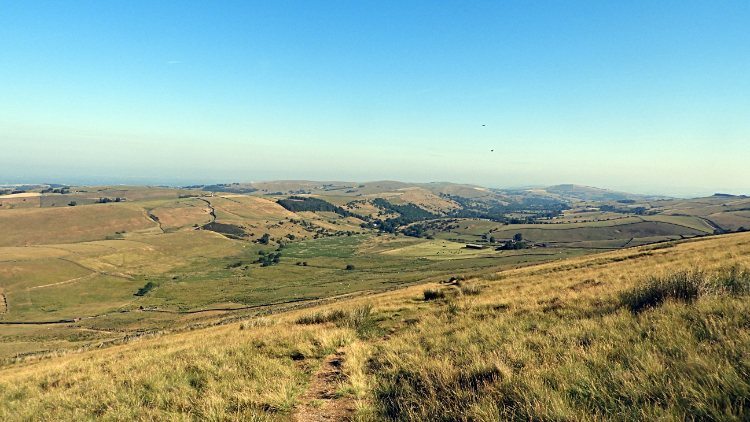 At Andrew's Edge I came to a stile with the field beyond pointing the way down to the valley bottom. My goal of Lamaload Reservoir where my car was parked appeared in view once more, the descending way across the field making a bee-line straight toward it. The field I thought was one turned out to be two, another stile having to be negotiated before I had completed the two fields of descent. I bottomed out near to the north-side edge of a plantation. 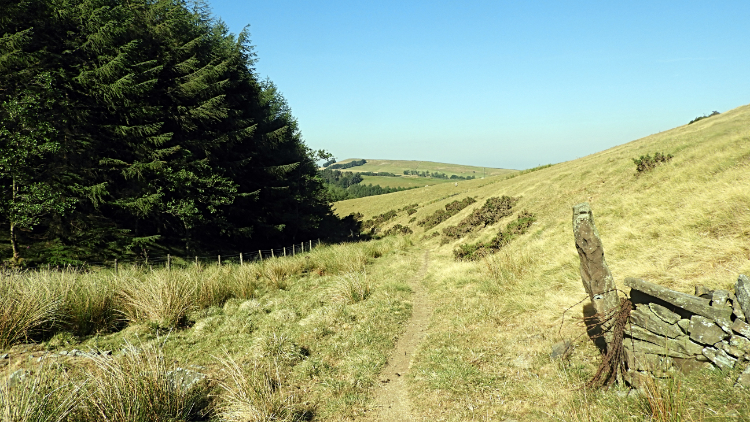 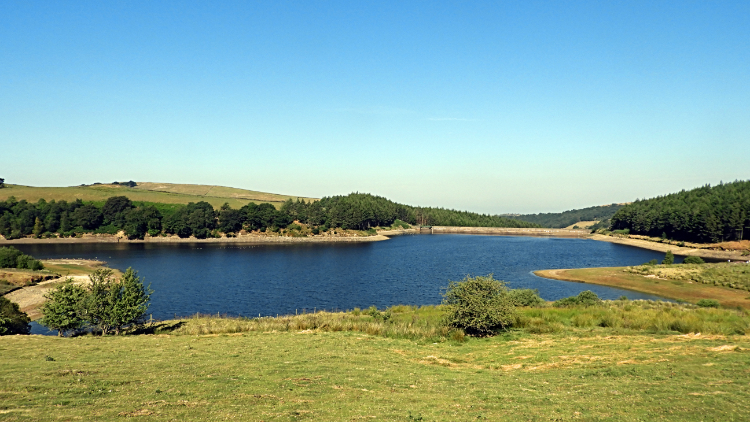 I followed an arching closed in path around the side of the plantation, keeping the forming beads of sweat wiped from my brow. There had practically been no wind on the magnificent ridge walk, over 500 metres high. There was no breeze in this enclosure at all and though it was still just a little before 9.00am in the morning it was stiflingly hot. I was glad to get around the plantation and back onto tarmac for the final few steps of the walk as I walked past Lamaload Reservoir. At least there was a semblance of a breeze in the gap between the plantation just passed and the one next to the reservoir where I had failed to find the indicated path at the start of the walk. I finished my walk at 9.00am precisely, two hours and thirty five minutes after setting off. Not bad for six miles with 360 metres of ascent and including a ten minute refreshment break on Shining Tor. I was happy with that.

Oh, why did I start the walk so early and hasten to finish it by 9.00am? The answer: Because I drove from Lamaload Reservoir to East Sterndale and then walked to Chrome Hill and Parkhouse Hill. Two great Peak District walks in one fantastic day!