Ironbridge, Much Wenlock and Wenlock Edge

242 Telford, Ironbridge and The Wrekin
217 The Long Mynd and Wenlock Edge 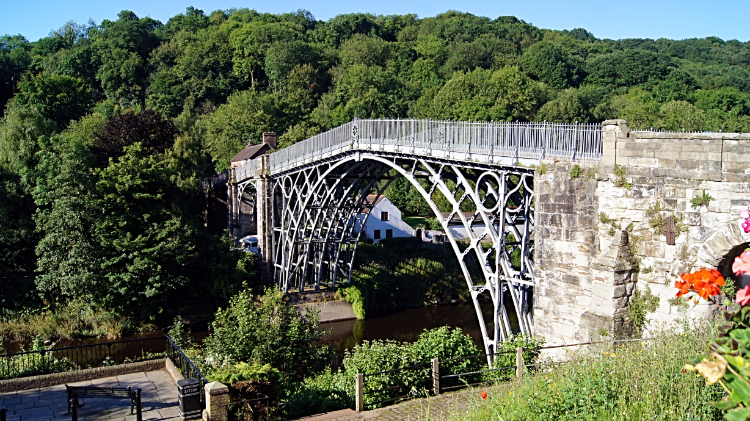 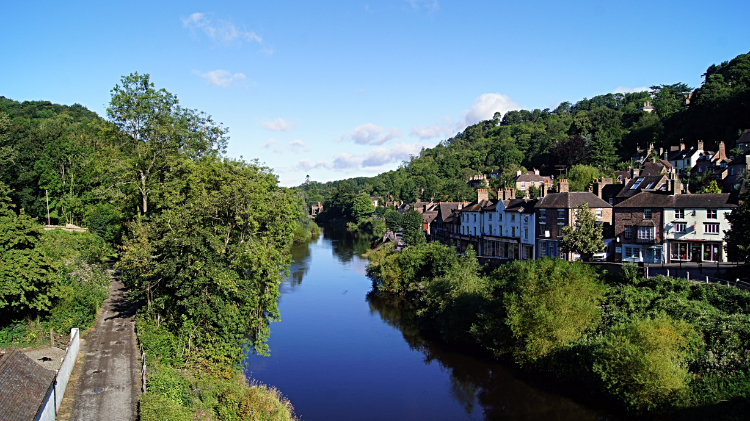 Around two hundred years ago, during the boom times of the Industrial Revolution, Ironbridge Gorge, which was formerly known as Severn Gorge, would have been as black as tar. Furnaces would have been blazing in the forging of iron and factory chimneys belching out black smoke. Not pretty then. But now, as I walked out of Ironbridge Gorge and across Abraham Darby III's Iron Bridge, the first in the world, opened to traffic in 1781, the scene could not have been more idyllic. Just eight o'clock in the morning in early August and with the sun already blazing down I stood on the iconic bridge, which I had to myself, and looked down to the River Severn and the town of Ironbridge which was still waking up to the day. It was a magical moment. All that stirred were a few Ducks making ripples in the calm water of the river. The Severn looked much like a mill pond and the houses of Ironbridge, nestled in and around swathes of summer green trees made for the prettiest picture. It was a shame to leave the scene. 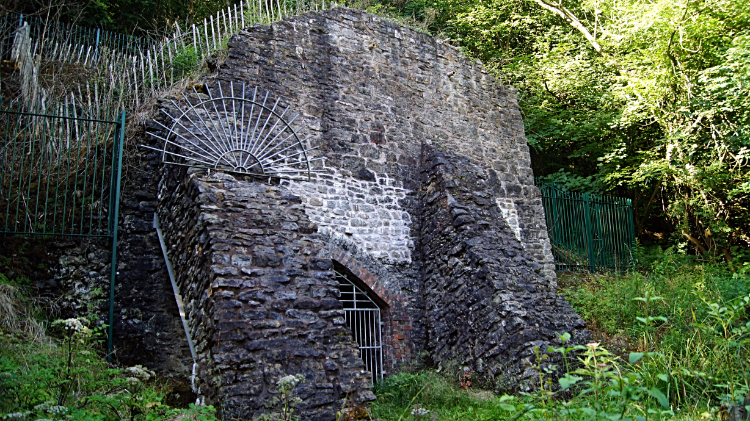 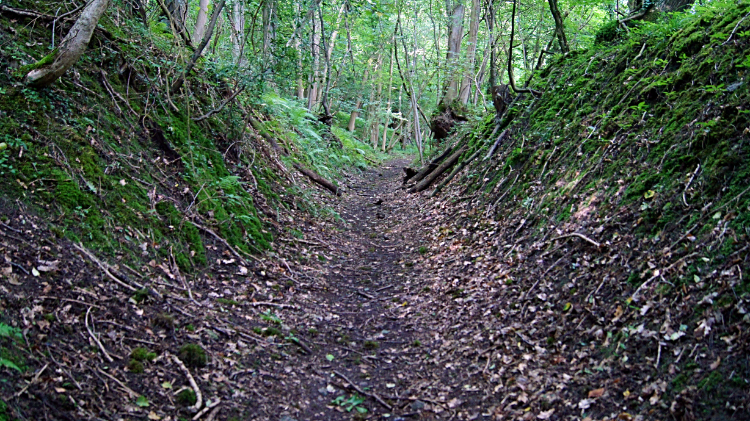 Thrilled already, and by the thought of more adventures in the next seventeen miles, I followed the Shropshire Way out of Ironbridge by way of Benthall Edge Wood which involved a climb of over 100 meters. A good start to my day then; I do like an early climb to warm me up for the rest of the day. It was not an unbroken climb though. On the way along the path I stopped quite a few times to observe natural delights and to respect relics of the industrial past. The first of these was Benthall Edge Lime Kiln, one of many that worked the slopes of the woodland in the past. There were disused limestone quarries scattered just off the line of the path too, all now being reclaimed by nature. There were Wild Cherry, Ash, Wych Elm and an abundance of Sessile Oaks in the woods, many of which I stopped to admire. And to my delight the path sunk into holloways in many parts of the trail. I love holloways, always imagining the thousands, more like millions of footsteps that had gone before me to make such an depressed impression on the path making its way through the woodland of limestone and shales. Benthall Edge Wood is stunning. As with Ironbridge Gorge at the start of todays walk, it was a shame to leave Benthall Edge Wood too. 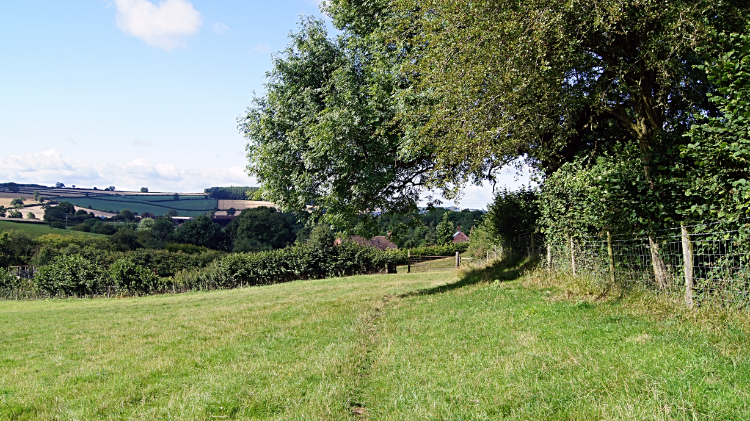 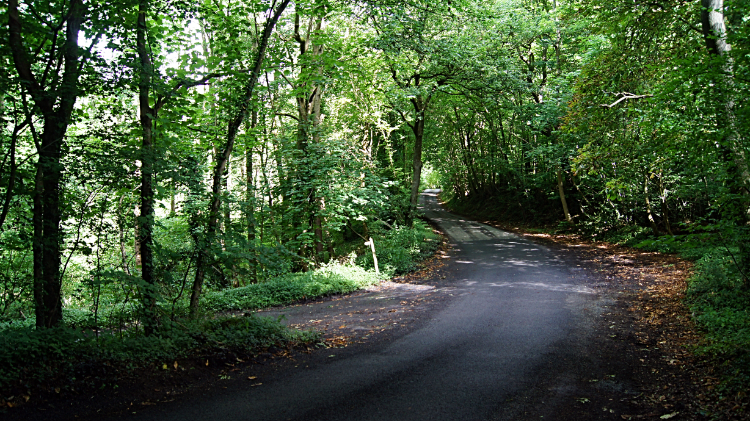 The road from Wyke through Audience Wood

The blessing with long distance walks is that the disappointment of leaving a thrilling part of the walk behind is counterbalanced by the thought of the next revelation which awaits. You win a lot more. As it was here. From Benthall Edge Wood I emerged to the most delightful pastoral scene. A picture of beauty. Okay, I was just crossing a rural stretch of my walk. A transition from one highlight to the next one could suppose but this piece of English countryside was pristine. The fields were as tidy as could be as were the farms and estates I walked through. The Vineyards, the village of Wyke, Manor Farm. All lovely. Over to my left I looked over to Benthall Hall, a 16th century country house which will have seen many changes. What will not have changed through is the gorgeous rolling countryside I was enjoying a walk within. 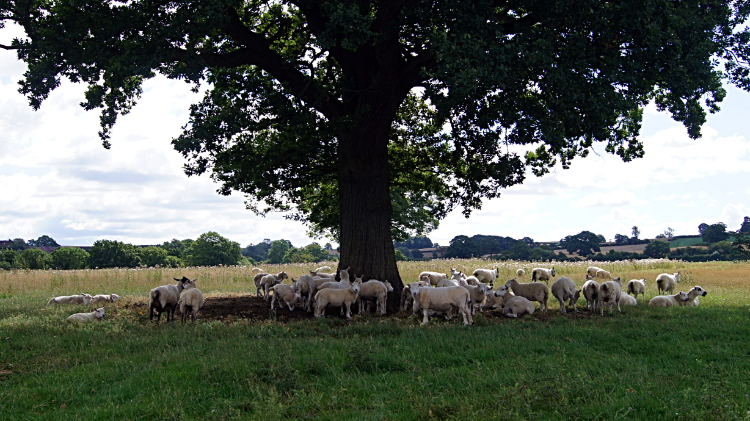 Sheep sheltering from the hot sun 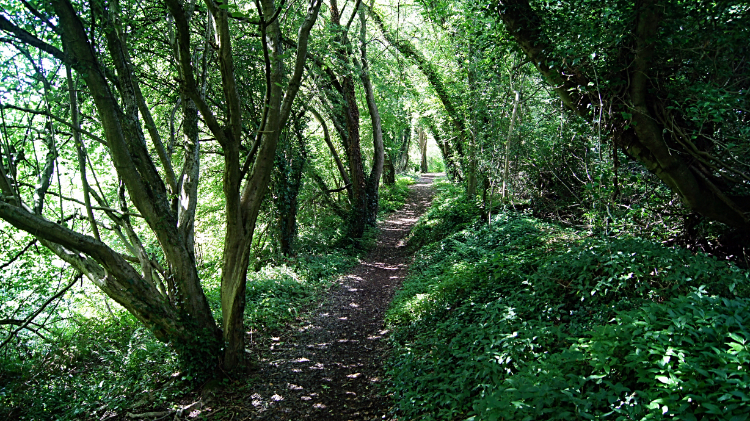 Following the disused railway line to Much Wenlock

After Wyke and another short walk through woodland I emerged into a vast field. It was getting hot as I crossed it, the sun high on the sky and blazing down. The fields resident flock of sheep did not like it at all. Ten thirty in the morning and already too hot for them. They were all grouped around a big Oak tree in the middle of the field. And though I walked close by they did not feel obliged to move. They did keep a good eye on me though. At the far side of the field I came to a clump of Thistle which was in seed and the down was already lifting from the Thistle and wafting across the slight wisps of hot air. I decided to have a bit of fun, walking through the clump and kicking on my way, causing an lovely shower of Thistledown. The kid in me; it was great. Next came a little diversion as I cut away from the Shropshire Way to follow the Jack Mytton Way, running in a parallel line towards Much Wenlock. The reason for the change being to follow the line of the dismantled railway from Buildwas to Much Wenlock, a spur of the disused Severn Valley line I had walked yesterday. A line of tree covering the way of the line afforded me the same solace of shelter the Sheep had sought under the Oak. Which was appreciated. 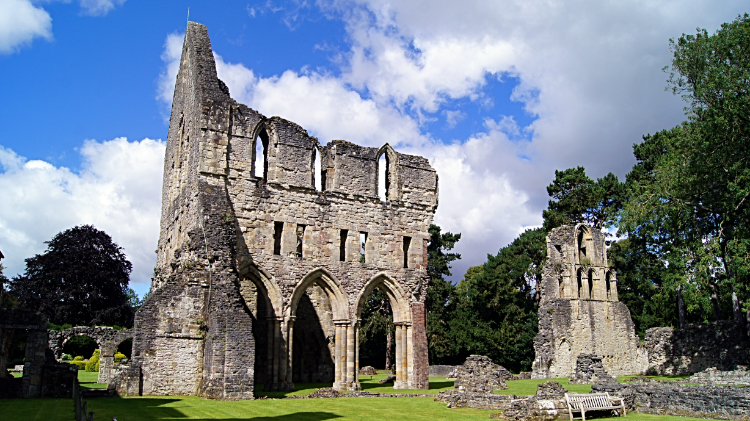 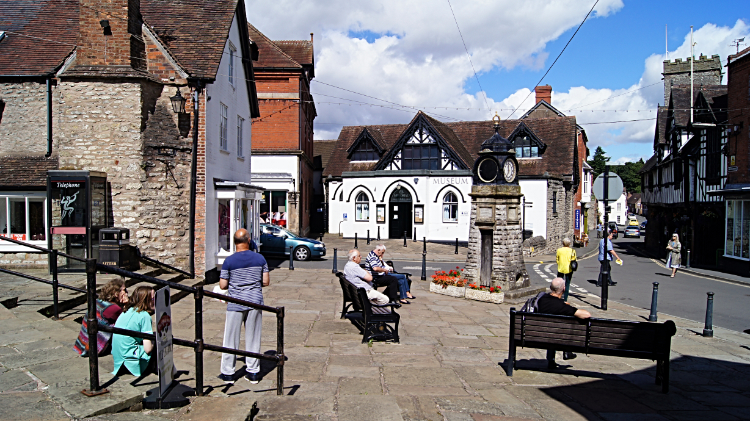 Shortly after leaving the route of the old railway I arrived at St Milburga's Priory on the east side of Much Wenlock. The sight of religious buildings was becoming a theme for the walk, St Milburga's Priory being the third in three consecutive days after Haughmond Abbey on day two and Buildwas Abbey on day three. St Milburga's, also known as Wenlock Priory is very pretty with an appealing unplundered Priory House amidst the extensive religious ruins. From the priory I walked into Much Wenlock by way of Bull Ring and Wilmore Street. I was instantly smitten. Much Wenlock is beautiful, everything about the town appealing to me. Priory Hall, Holy Trinity Church and the Guildhall, each one an impressive building. In the Guildhall a local flower, fruit and vegetable market was taking place. It was busy with people. In the town square, at the junction of Wilmore Street, Barrow Street and High Street more people were milling around. Some were window shopping, some were sitting on benches or steps within the square and some were sitting in the outside areas of cafes enjoying refreshments in the sunshine. I joined them, taking a thirty minute break and enjoying watching the stirrings as I enjoyed my lunch. 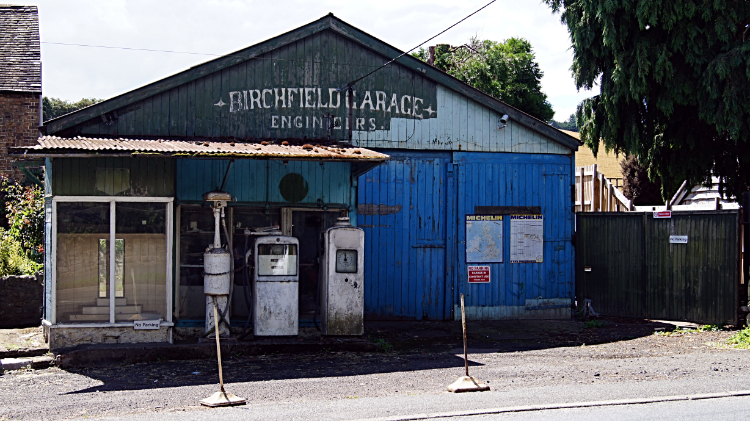 Birchfield Garage in Much Wenlock 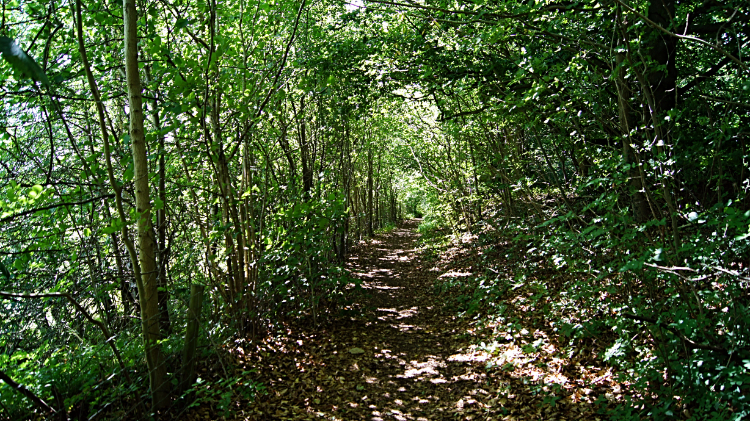 I was looking forward to the next stage of the walk. Walking along High Street and past a queue of customers outside the local Butchers I came to the A458 road where a restored 1940's bus trundled past. It seemed appropriate. Then I started my climb out of Much Wenlock by following the line of the A458 to Stretton Road where I would leave the urban behind. Before doing so I took note of Birchfield Garage with its old petrol pumps outside. I can't imagine they worked. Another relic of the past which also seemed appropriate to my time spent in Much Wenlock. Never modernise.. please. Out of the line and out of the sight of houses I climbed steadily up Blakeway Hollow towards Wenlock Edge. The shade of shrubs and trees on either side of the path were appreciated during the climb. 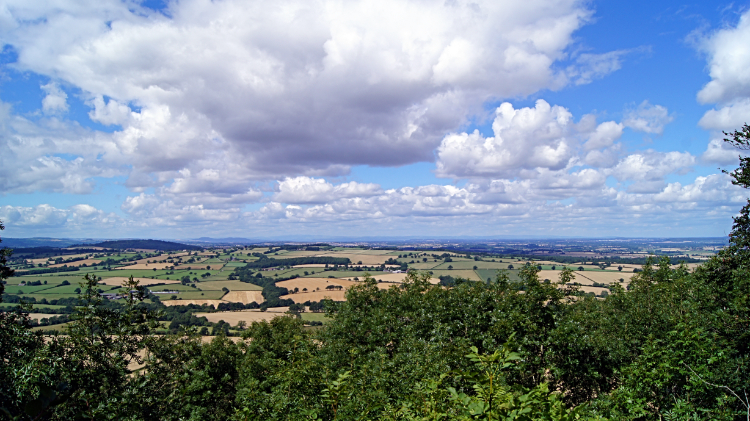 The view west from Wenlock Edge 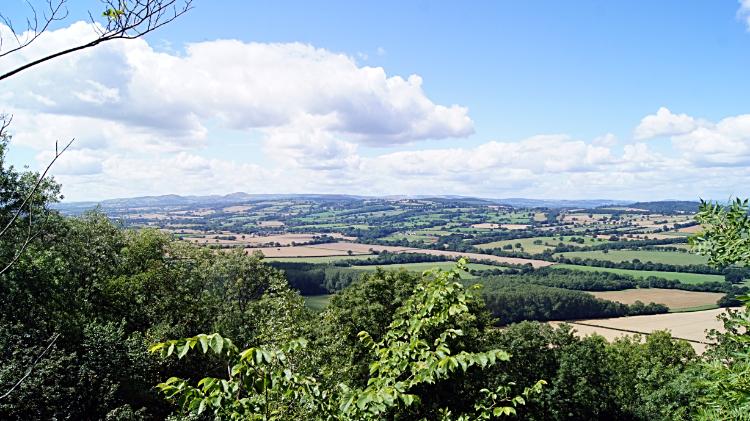 The view north-west from Wenlock Edge

It was just an eighty meter climb from Much Wenlock to the limestone escarpment of Wenlock Edge. The edge is a site of special scientific interest and I was instantly smitten. Not because of the geology or by the significant flora and fauna found here. No. I was taken b the views I was being delivered by the height. Not a great height, just under the 250 meter level, but enough to provide the most outstanding views to the west, a span of around 120 degrees north-west to south-west. Much of the time I was hemmed in by the narrow band of woodland sitting on top of Wenlock Edge, a continuous line of green stretching fifteen miles. But there are gaps and there are limestone outcrops to stand or sit on while enjoying the terrific view of the west Shropshire countryside reaching all the way to the Welsh borders. More immediate views include the vast white scar of Wenlock Edge quarry which is now disused and being returned to nature. Across from the quarry was a great view of Brown Clee Hill, Shropshire's highest point. Further on and on the other side of Wenlock Edge I had a good view of the Lawley and of Caer Caradoc Hill which I would cross tomorrow. 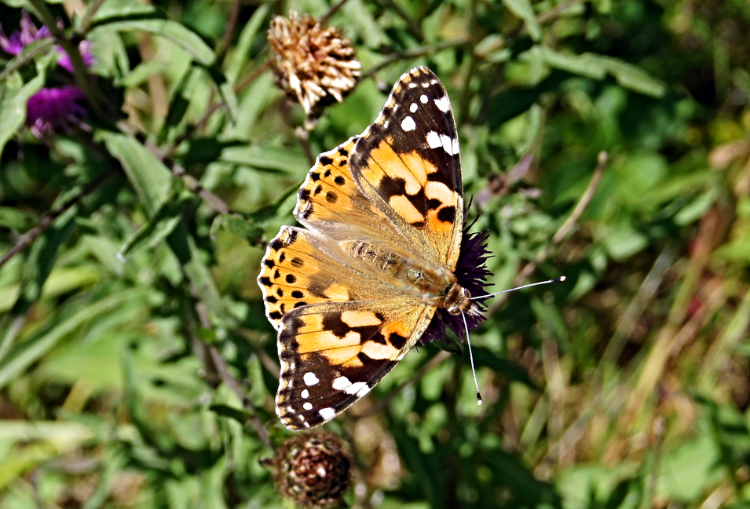 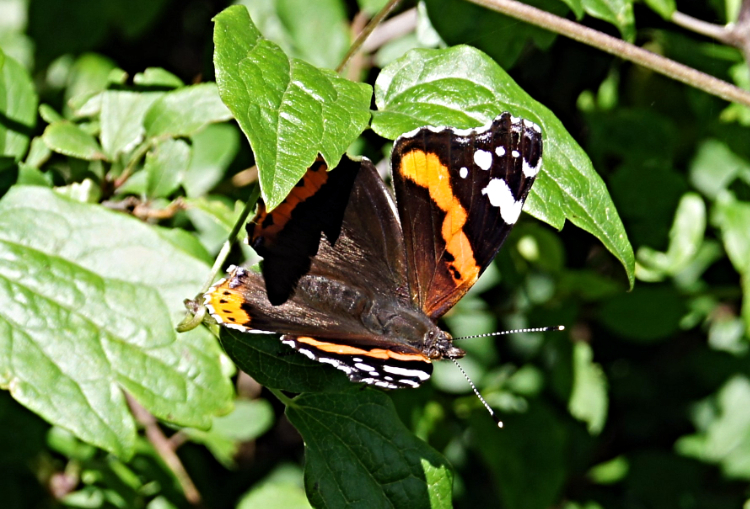 Once of the most stunning, most remarkable and certainly most memorable events of my walk on Wenlock Edge was of the fifteen minutes or so I had in the midst of Butterflies. At a point just west of the quarries they seemed to be everywhere and what was most revealing was the number of different species. I am no expert on Butterflies but i do know some species and I can certainly tell one from another. There were Small Whites with their individual pin prick spot on each wing and there were Peacocks with their big do not eat me eye on each wing. Great disguise that. There were a few Painted Lady, a Butterfly making a big comeback in recent years. And to my delight there were Red Admiral, a common Butterfly of my youth but a rarer sight now. Maybe they are making a comeback too. I hope so. Anyway, these species and more besides heightened my joy on Wenlock Edge. Surely they enjoyed the limestone environment as much as I did.

After six glorious miles of walking on Wenlock Edge I dropped from the limestone escarpment into Longville in the Dale and then I followed country roads to the village of Cardington, my journeys end for this special Shropshire Way day. It was two uneventful miles of walking.