217 The Long Mynd and Wenlock Edge 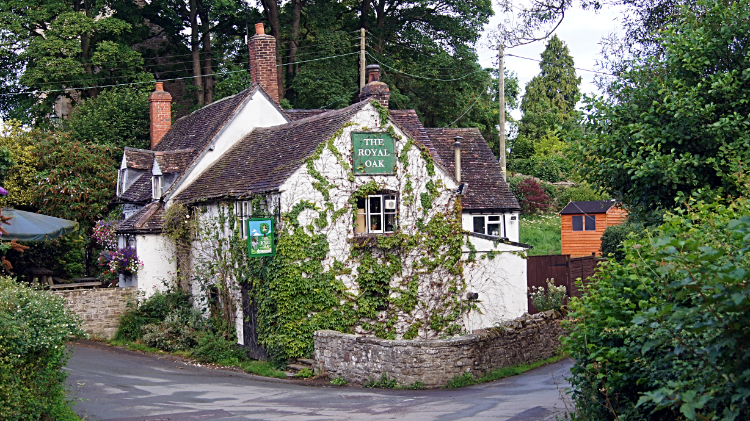 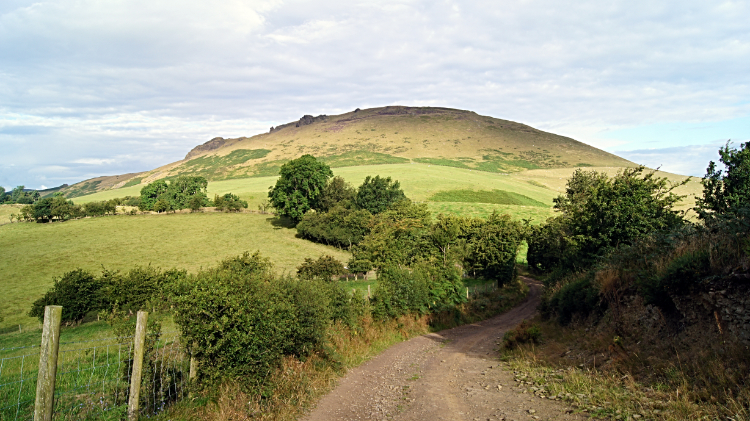 The track from Willstone to Caer Caradoc Hill

After a spectacular day in total sunshine walking from Ironbridge Gorge and across Wenlock Edge today promised another walk of spectacular moments. While also promising some very changeable weather. There was a band of heavy wet weather sweeping across from the south west and no way could I avoid it. Despite what was coming I had risen very early to be greeted by a very fine morning. Opting for a light breakfast in my digs I was away before my hosts had stirred and walking out of the pretty village of Cardington before seven o'clock. The peaks of the Lawley and Caer Caradoc Hill beckoned me towards them. I had originally planned to climb both but the weather forecast of doom caused me to bypass the Lawley this time. I had a plan. So, rerouted, I walked along the road from Cardington to Wilstone where the tarmac ended at Lower Farm and continued on up unmade track in a south-west direction towards Caer Caradoc Hill. The track continued on that course to round the south side of the hill but I cut off from it a half mile beyond Lower Farm to track northwards across a field to reach the north-east edge of the hill. Where I left the track a sign read 'Welcome to Caer Caradoc. These hills are about 560 million years old and are some of the oldest in Shropshire. With prehistoric field systems and an Iron Age Hill Fort on the summit of Caer Caradoc, this area has a wealth of history and fantastic scenery'. Now that was an invite. 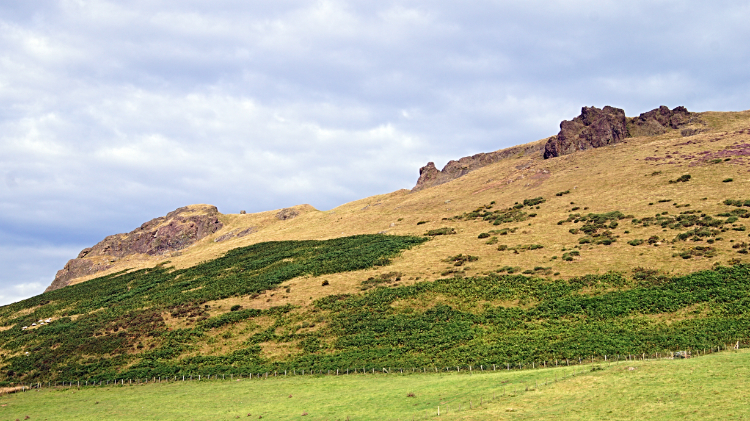 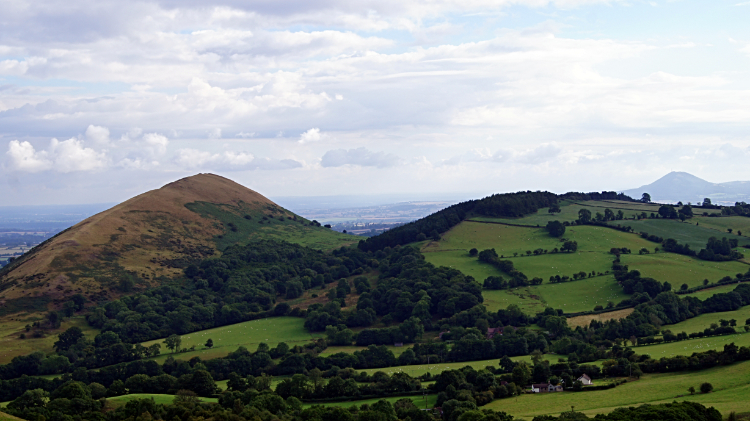 The Lawley, Lodge Hill and The Wrekin

Having crossed the field I began my climb of Caer Caradoc Hill. It was a plus one hundred meter haul up to the summit at 459 meters. With no respite. Having my long distance walking backpack strapped on it was no easy task. Especially at before eight in the morning. Sheep on the slopes of the hill looked down on me with a sense of surprise. "Why is he here so early? And why is he climbing up the hard way?". they may have thought. Who knows. "Alright clever clogs, I will be up there with you in my good time". I thought to one Sheep which was peering down on me from a high outcrop. And I did take my good time, resting constantly to lower my beating heart rate. Fortunately as I climbed I enjoyed good views to the Lawley, the Whaleback hill twin of Caer Caradoc and to the Wrekin, a constant view on my Shropshire Way walk but now fading into a misty distance which I could spot beyond the top of Lodge Hill. 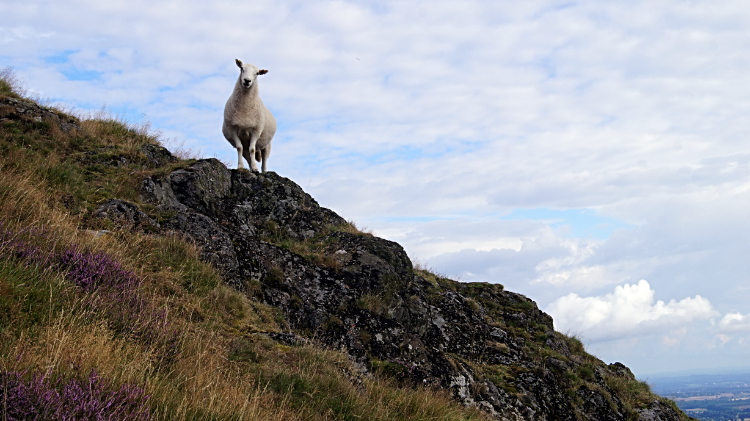 Come on lad, get a move on 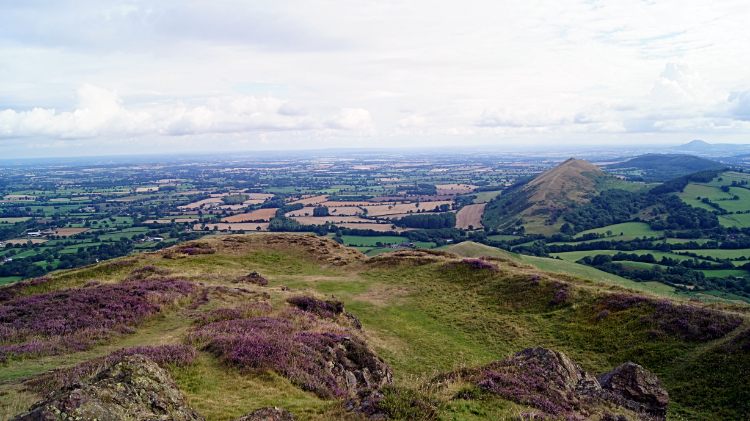 As I climbed further up the steep slope I came up to a track weaving its way up the hill which I followed. It was less steep than my earlier course and now on it I could stand erect rather than stoop on all fours. Slowly but surely I walked up the track, gladdened by patches of blossoming heather on the upper slopes as I climbed. Again I took breaks to look around. to the surrounding hills and back to my course of yesterday across Wenlock Edge and over the lower lands to Cardington. And I looked upwards to the sky. Though it was still fine and though sunshine was still making its way down to me I could see it was becoming a milky sun. And as I had been promised in the weather forecast I could see the distant sky filling with more threatening cloud. Despite all this foreboding I had now finished the climb to the summit of Caer Caradoc Hill and I was not going to rush off. I was going to enjoy it. 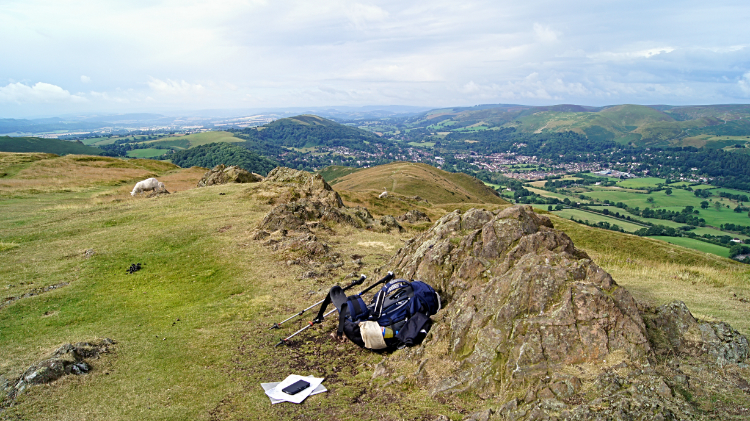 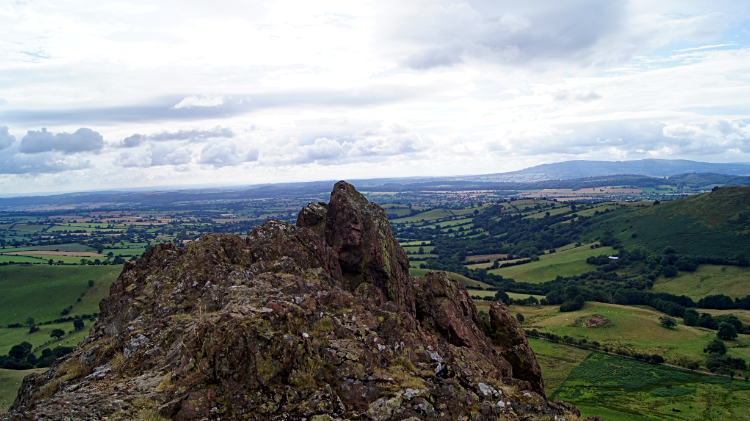 Outcrop on the edge of Caer Caradoc Fort

I flung off my backpack, put my chattels such as map and GPS on the ground and stood upright. Raising my arms I whooped with joy. "Done it. What a moment. What a lovely spot. And what a view!" I exclaimed to myself. The Sheep grazing up top with me didn't flinch at all. They are probably used to ecstatic walkers up here. Anyway, the scene was brilliant. So early in the day I had the hill top to myself, resident Sheep excepted. The sun was still trying its best and I did enjoy sweeps of sunshine and the reflective shadow it brought as it brushed the hill top. The heather in blossom provided patches of beautiful purple colour. And the outcrops sparkled. Caer Caradoc Hill is volcanic in origin and the narrow ridges of resistant Pre-Cambrian rock thrust upwards pop out all around the hill top. They form a natural border to the site of the Iron Age Hill Fort. It makes perfect sense the ancient folk encamped here. 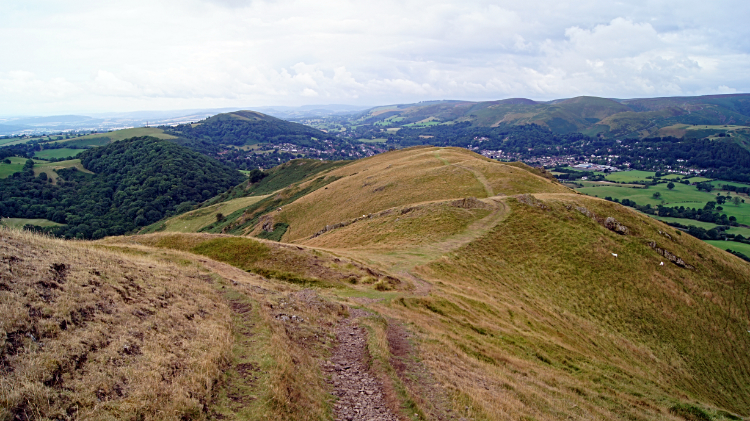 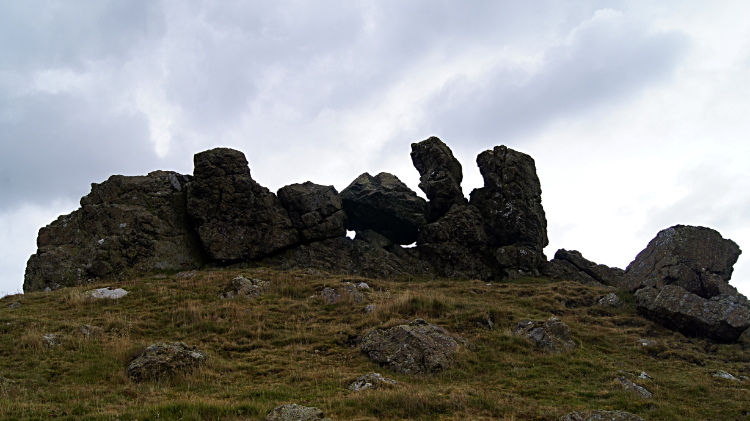 My time was done. Leaving the Sheep to graze I headed down from the top of the hill, gambolling with a spring in my step on the airy path following the ridge line down in a south-west direction to Three Fingers Rock. That was a really fun part of the walk, bounding from the top of the hill without a care in the world. Three Fingers Rock, set on the edge of the upland area albeit seventy meters lower than the summit. Can you make out the three fingers? I think I can see two and the thumb. From Three Fingers Rock the path weaved around and down, finally heading due south in a steep decline towards the gap between Caer Caradoc Hill and Helmeth Hill. By jimminy, it was steep on the last bit. I had to put the brakes on to stop slipping down on my backside. Which I did manage to do. I was pleased to get down to the bottom though. 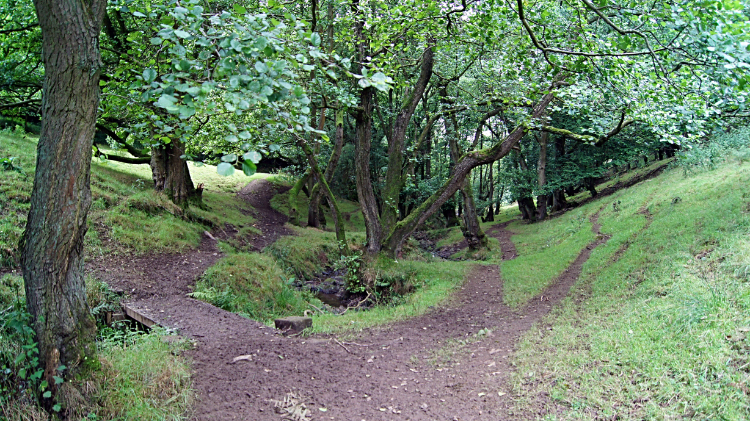 In the gap of Caer Caradoc Hill and Helmeth Hill 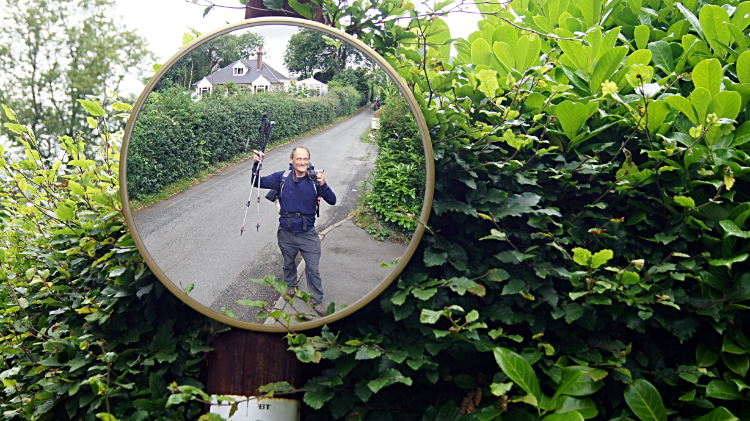 From the gap between Caer Caradoc Hill and Helmeth Hill I ambled along a field side and then down a country road towards Church Stretton. On Cwms Lane I passed a group of around twenty ramblers just setting off on a walk. "Where are you walking to today?" I asked. "Caer Caradoc Hill" came back the reply. "Good luck, I believe rain is on the way" said I. "Yes I know but we're committed to it now" said the leader. Five minutes later the rain which had been expected had started and ten minutes after that it was pouring down. I felt sorry for the ramblers. I was safely parked up in a Church Stretton cafe enjoying breakfast and reading the daily newspaper. Part two of my fifth day on the Shropshire Way could wait. I was only halfway done today but I was not moving quite yet. Having started early I did not need too. And as I enjoyed breakfast i revelled in the fact I had walked on Caer Caradoc Hill, a walk I had so wanted to do for a long time, in the most perfect conditions.