217 The Long Mynd and Wenlock Edge
201 Knighton and Presteigne 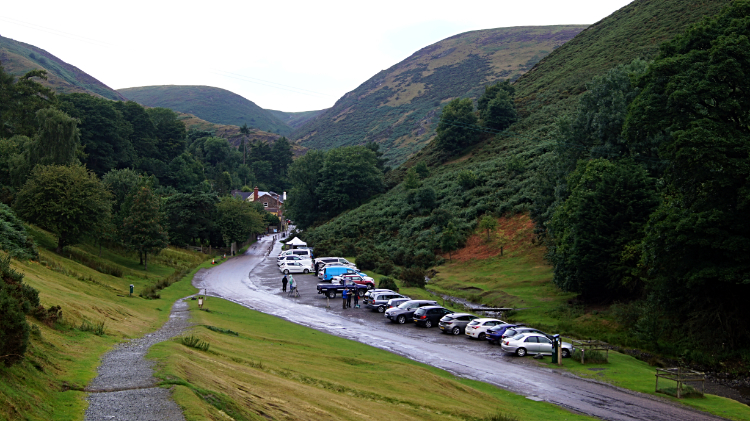 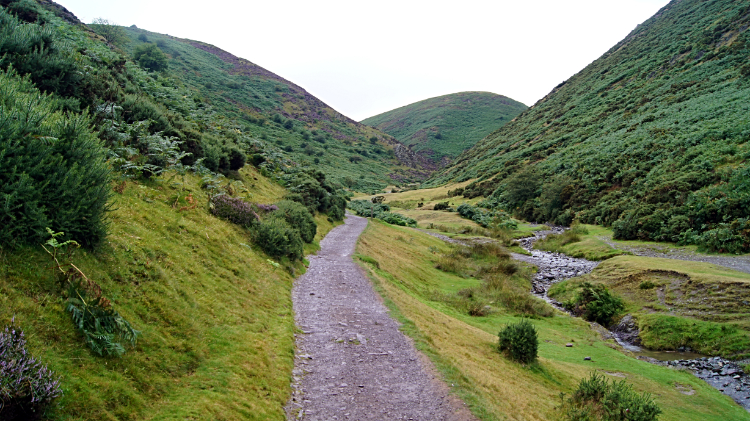 I was in the cafe ninety minutes, enjoying breakfast, reading the newspaper and chatting to the locals. All the time the rain poured heavily on to the streets of Church Stretton. Nobody was moving. Then around noon a glimmer of hope. The sign? We did not have to speak so loudly above the clatter of rain. It was relenting. Four hours earlier I had stood on top of Caer Caradoc in sunshine and two hours earlier I had walked into Church Stretton just as it had started to rain. Now I gingerly put on my dried waterproofs, filled my backpack and got up from my comfortable cafe seat. After saying goodbye to the good folk I had befriended in the cafe I opened the door and stepped back into the fresh air. Looking back through the steamed up cafe window for one final time I turned and headed uphill, along Sandford Avenue, on to Burway Road and then through Rectory Wood which led me over to Carding Mill Valley. A few hardy visitors milled around in their waterproofs and pac-a-macs. Though the rain was no more than a drizzle now the sky was still full of dark cloud and foreboding. Continuing past the crowds and past Carding Mill I climbed to the Long Mynd. I reflected on how much nicer it had been the last time I had been here, on my first Long Mynd walk, when I walked on this same path in sunshine. 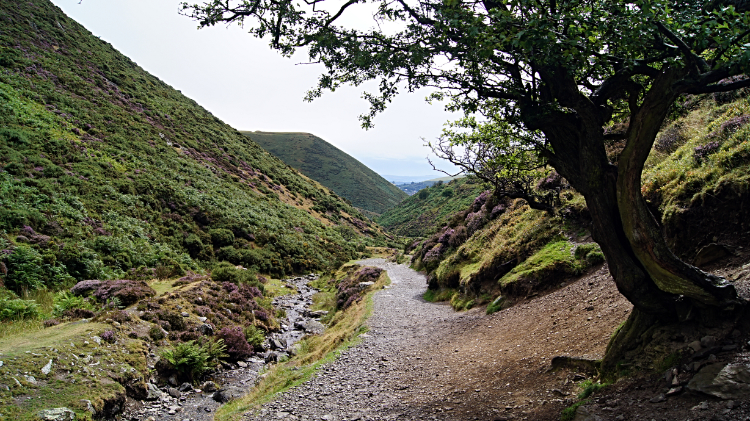 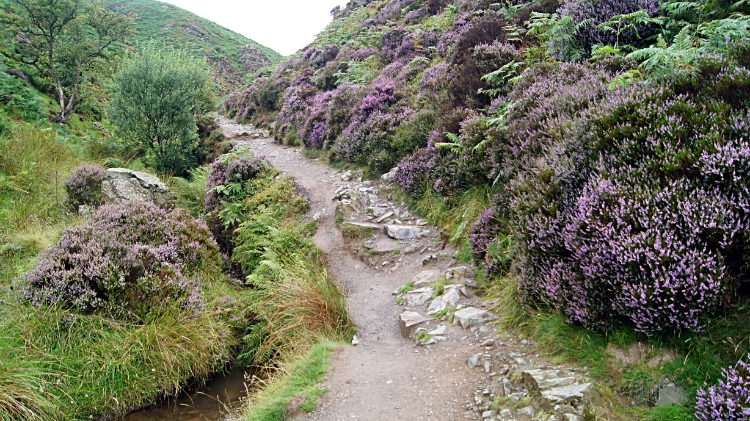 A hint of colour

On that first walk on the Long Mynd, on my first ever visit to Shropshire three years earlier, I was in the company of friends and we walked through Carding Mill Valley, keeping a straight line on Mott's Road and on the pass between Calf Ridge and Haddon Hill to join the Jack Mytton Way on Wild Moor. This time I detoured at a junction near to a Hawthorn, taking the left fork and following Light Spout Beck upstream. I noticed the rain had stopped as climbed along the path. As with earlier in the day on Caer Caradoc Hill I was heartened to see Heather Blossom on the side of the footpath. I knew I would see lots more on the tops. 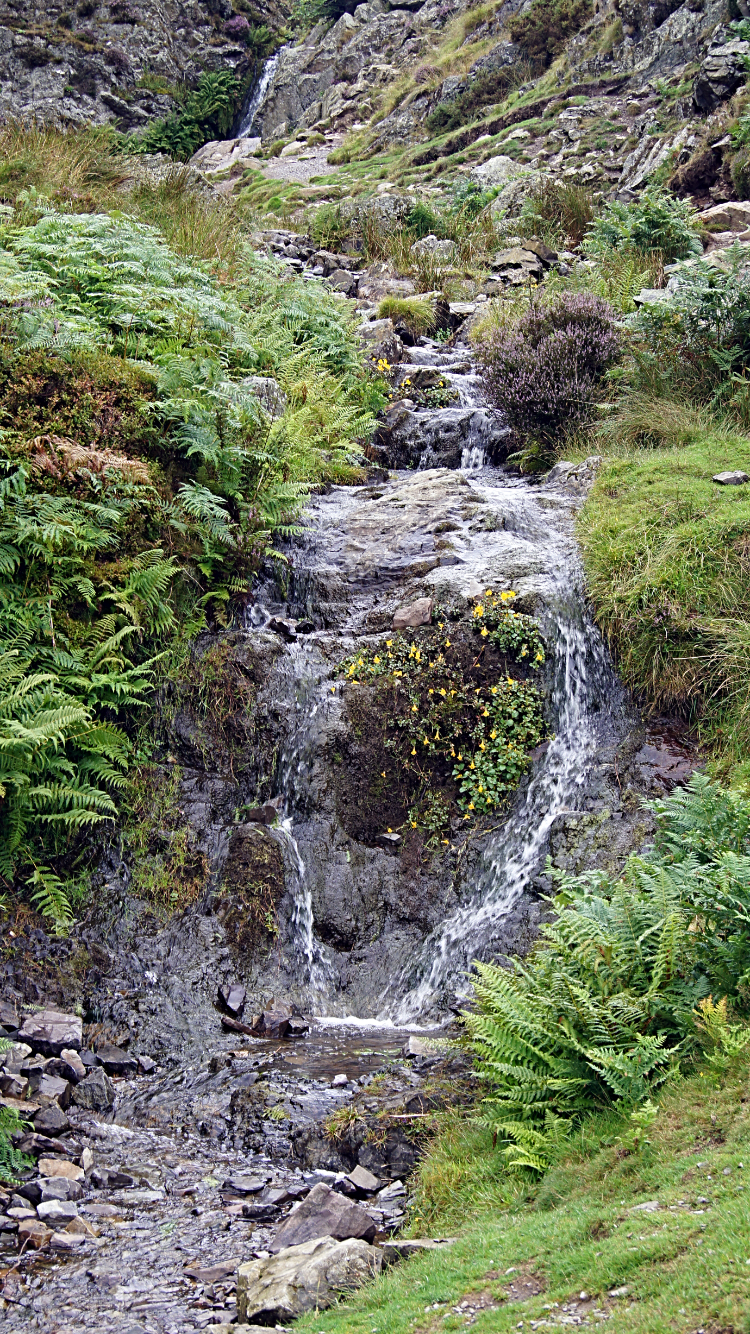 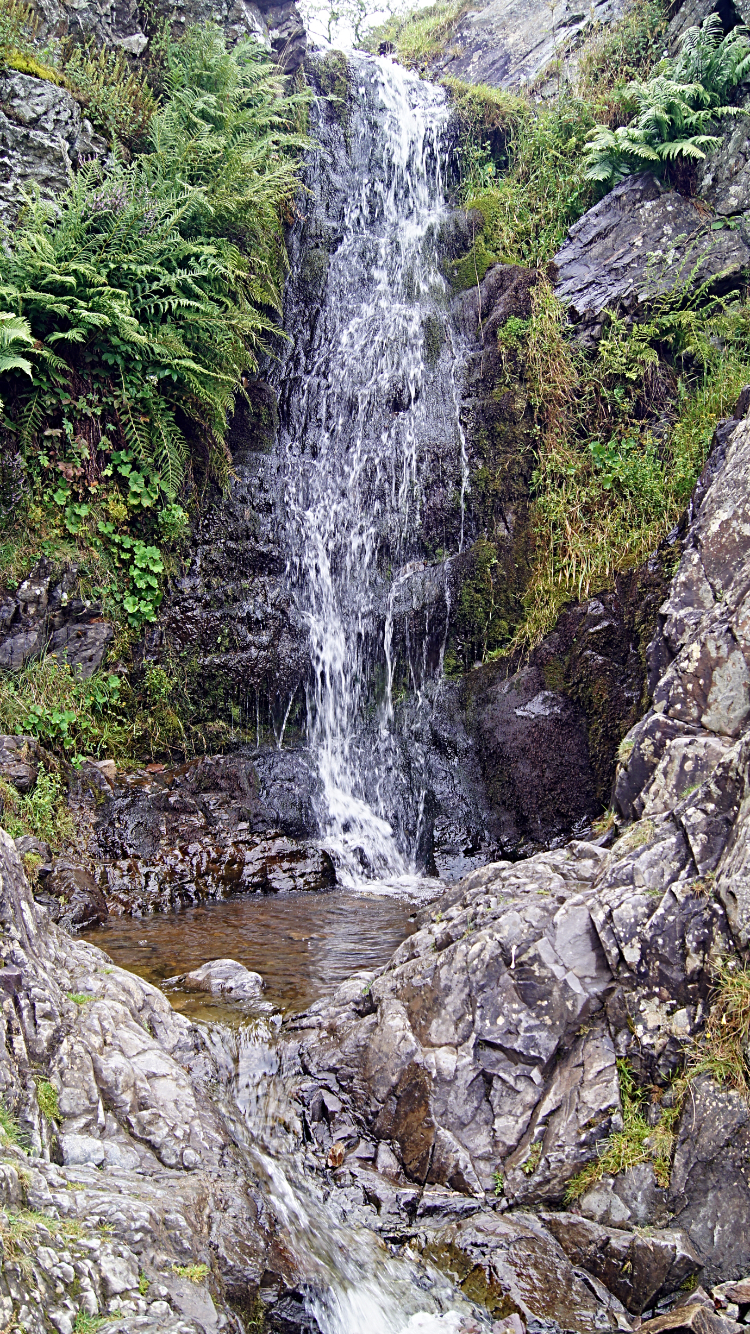 I reached a small cascade, not more than a two to three foot drop. "Surely not?" I thought. I did not think more than a second or two, soon spotting the real Light Spout Waterfall a little further on up the path. The waterfall is a four meter cascade and set in a picturesque hollow of the small valley rising up to the crest of the long Mynd a short way further on. Because of the rainfall a little earlier on I had the waterfall to myself. That was nice. The rain was now gone and forgotten. As I sat on a flat area directly next to the top of the waterfall I looked to the sky and I was sure i could see a semblance of blue sky. Wow, this was making my day. After ten more minutes of private personal time at Light Spout Waterfall I stood up, carrying on up the valley path which allowed me to rise on to the Long Mynd. After three years I was back. And I had promised myself that first time that I would come back. 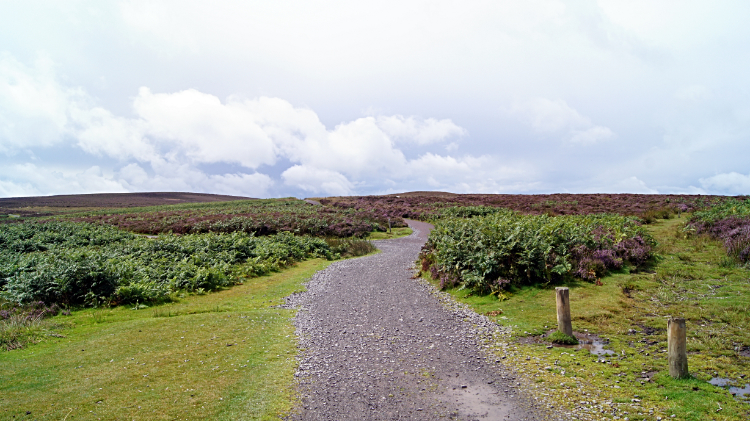 Return of the sunshine 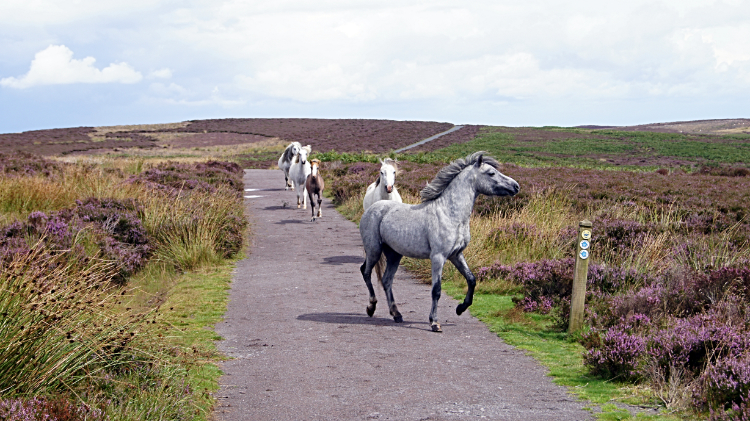 Wild horses of the Long Mynd

As if by plan and design the sunshine which had left me on Caer Caradoc Hill in the early morning returned to shine down on me as I reached the top of the Long Mynd in the early afternoon. The light lit up the colour of the Heather. As I knew it would. That was really good. But the best bit came next. On that first walk of Long Mynd we had enjoyed the company of the Wild Horses which roam freely on the moor. This time around they entertained me. They were a bit more frisky than last time and two Stallions had a right heave ho with each other. One will have been the dominant male sire and one a potential usurper. I watched the shenanigans for ten minutes and I do believe the incumbent won the day. The loser skulked away and was shadowed by the boss afterwards, making sure he did not come anywhere near the herd. It was a privilege to watch the drama unfold, again by myself as no one else had yet ventured out after the rain. 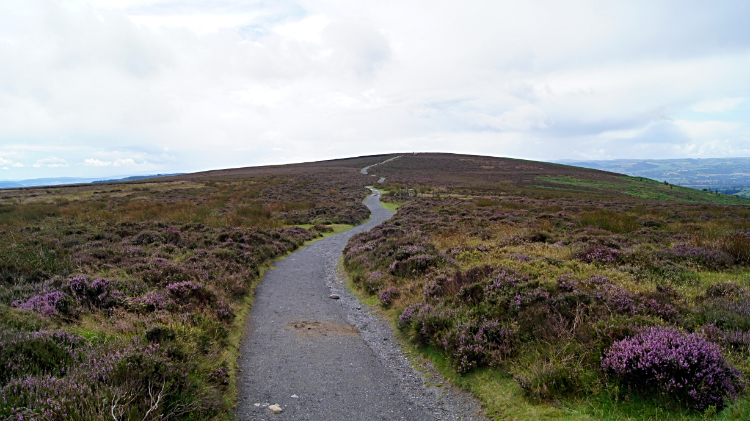 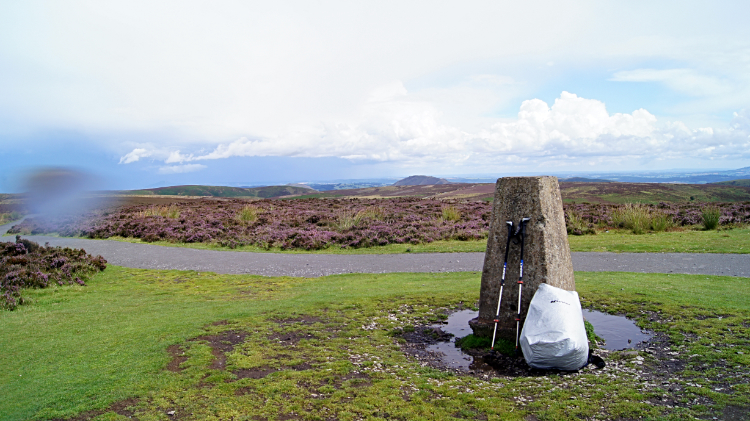 Ambling on, I was in no hurry, I strolled off the official Shropshire Way to wander along the paths cut through stretches of the moor top. Paths, catering possibly for moor management and that which take advantageous viewpoints of the surrounding landscape. As I sat down on a raised platform by one of the paths I watched other people finally coming back on to the moor. Clouds were parting more and more now. Sun was beating down and it was beautiful up here. What a marked difference to an hour before. Back on the main path I continued the slow climb to the high point of the Long Mynd at Pole Bank. I took a break, enjoying the moment and enjoying the views once more. 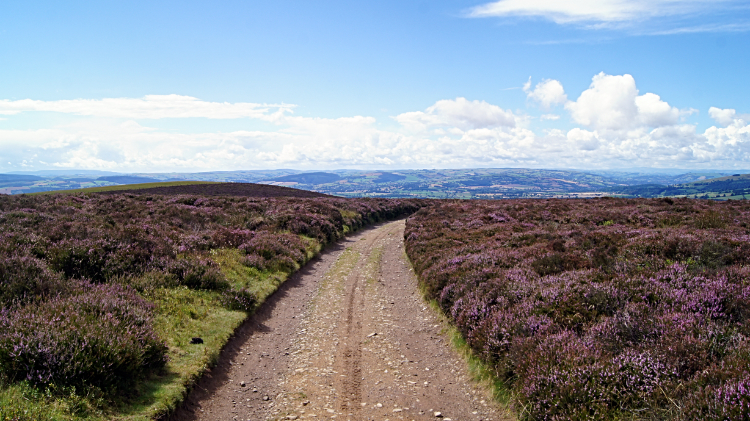 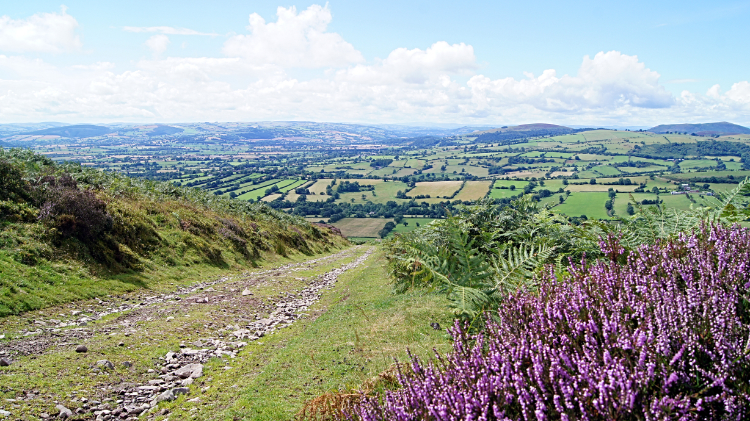 The view west from the Long Mynd

Mid afternoon and cloud was nearly all gone. It was a stunning afternoon as walked from Pole Bank to Pole Cottage and from there I followed the track leading to Stanbatch. This track would drop me 200 meters but on the drop I was to be given the best views of my entire day. The west facing bank gave me an unbroken and uninhibited view of the Shropshire countryside, much of which was to enjoy on my last two days on the Shropshire Way. I could certainly see Wentnor to where I was heading now for my overnight stay and I could see the rooftops of Bishop's Castle, a town I would visit tomorrow. Beyond there I could see the Clun Hills which I would touch upon in the coming days too. or now though i walked down the long straight road from the Long Mynd to Wentnor and enjoyed a very good evening with dinner and a couple of beers in the pub. I believe I had earned it, having completed two walks in one day. Two spectacular walks.