Summary: This short walk on the north-east tip of the Chiltern Hills provides some spectacular views over the flat lands of Buckinghamshire, Bedfordshire and Hertfordshire. All three counties can be seen from Ivinghoe Beacon on a clear day and it was a clear day my wife Lil and I got to enjoy this delightful two hour walk which was not rushed. So much was the thrill of the roller coaster walk over a series of small and shapely hills. 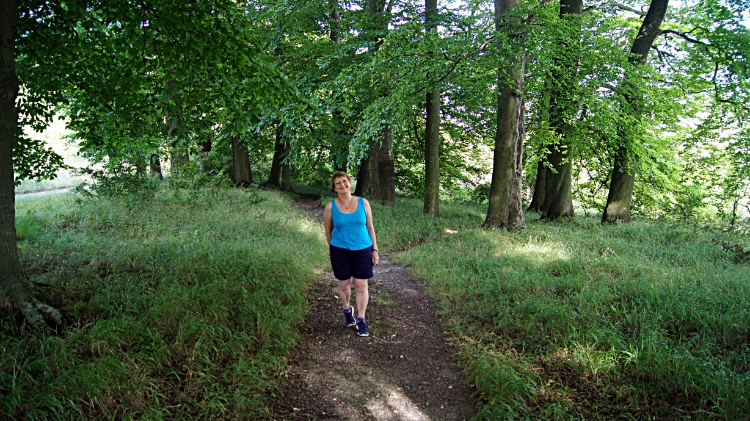 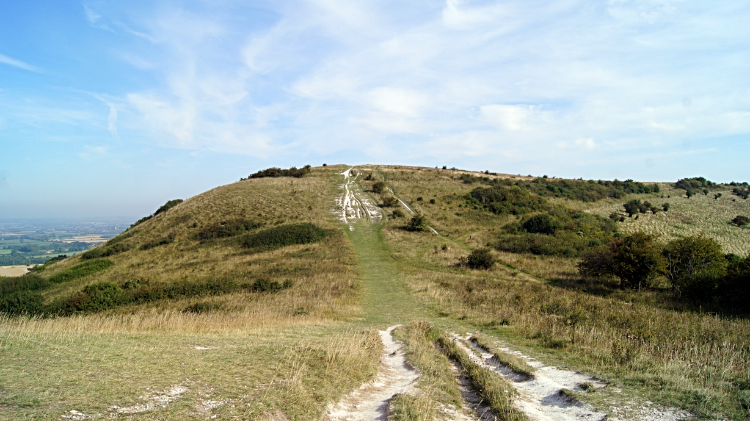 It is always a thrill to return somewhere that made a profound impression on me the first time around and so when Lil and I planned a short visit to Aylesbury during our summer holiday tour of southern England in 2019 I said to her "You have just got to see the view from Ivinghoe Beacon. It is not too far away". Not wanting too long a walk while on holiday she was fine with this short alternative. I had first climbed Ivinghoe Beacon and seen the wonderful view on my Ridgeway National Trail walk of 2012. Doing so again seven years later was such a thrill, particularly with Lil being able to enjoy the views too. And today the views would be even better than the first time. It was spectacularly sunny and clear. 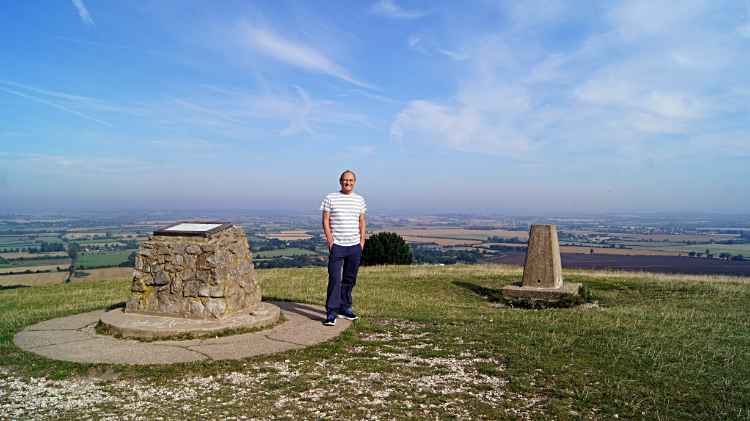 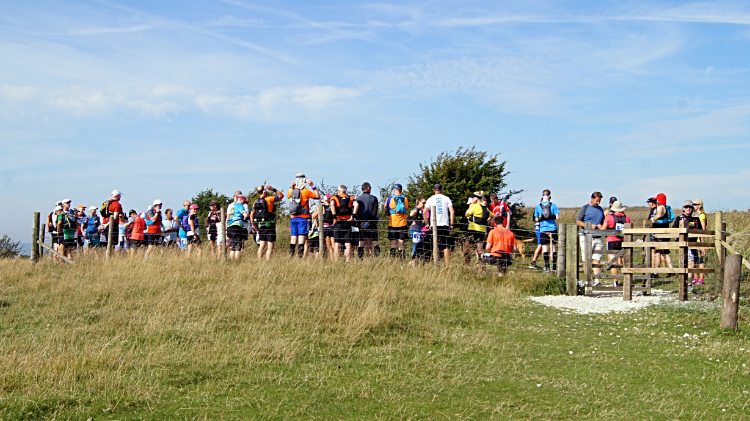 Ramblers on the Icknield Way Trail

After walking through the woods of Steps Hill and showing Lil the spectacular view of Incombe Hole, a steep-sided dry valley which arcs like a banana when viewed from the Ridgeway path, we dropped off Steps Hill and carefully used our childhood learned Tufty Code to cross Beacon Road and climb the white chalk path leading up Beacon Hill to Ivinghoe Beacon. "A bit easier this time without the heavy backpack" I said. When we reached the top of the mere 30 metre climb the promised views were everything I had hoped for. Lil was impressed telling me it had been well worth the effort. The beacon, which is the starting point of both the Icknield Way and the Ridgeway has long been a popular viewing place. Lil and I looked out across the Aylesbury Vale and as far as Tring and Aylesbury to the south west. Due north was Leighton Buzzard and miles of the Midland flatlands beyond. I had been told you can see the White Lion carved into a hillside on Whipsnade Downs too be it eluded me. Perhaps I was not looking in the right place. Oh well, I promise, these views are spectacular. We loved them. Full of beans, we bounded down from the beacon to the saddle between Beacon Hill and Gallows Hill where a large bunch of ramblers were taking a break while on a charity walk. I counted over fifty of them. 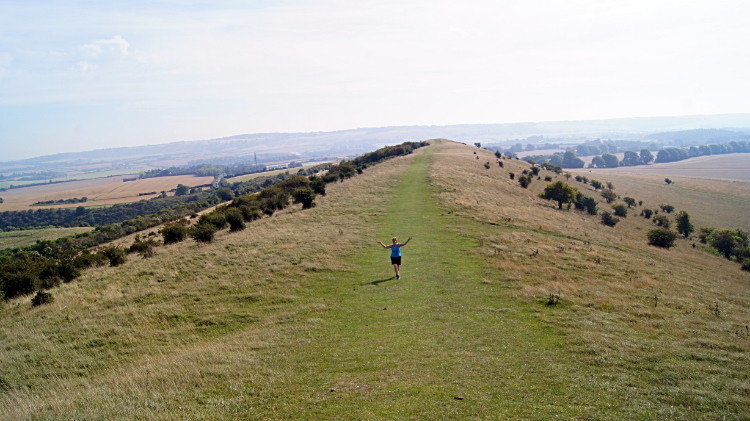 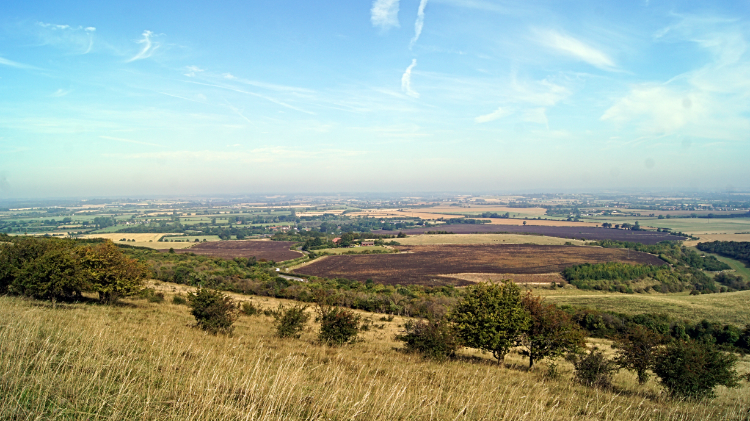 Next came the fun of bounding across the lovely ridged top of Gallows Hill, a fun packed couple of hundred metres. I could swear Lil danced across, so much was she enjoying herself. All the time, more alluring views were presenting themselves, this time those down below us to the east including Edlesborough, Dagnall and the Dunstable Downs. Including a shimmer of the White Lion chalk figure though heat haze was now forming and causing mirages. No mirage above our heads though. A procession of aircraft taking to the skies from Luton Airport, just ten miles away to the east, had us looking straight up at regular intervals. Easy Jet were easy to make out with the name easily seen on the tail fin. 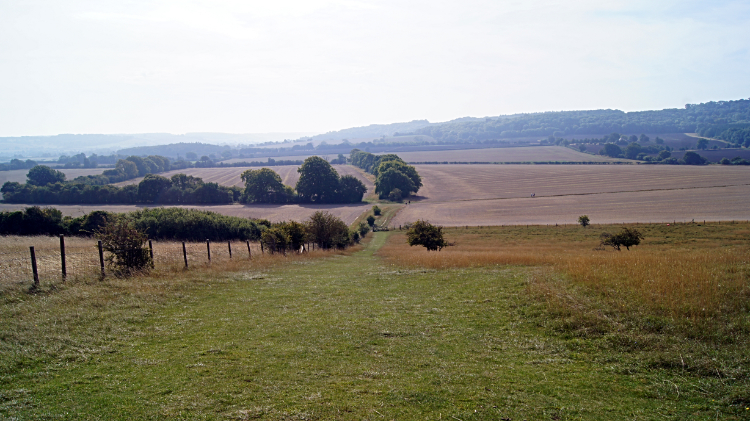 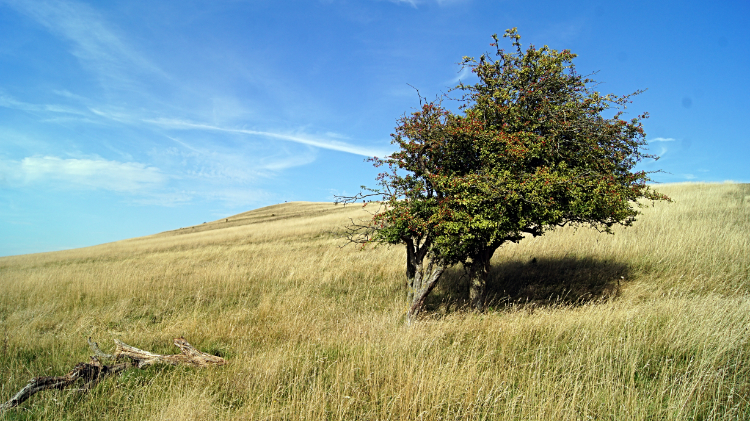 Next up came the fun run from Gallows Hill, a quiet steep sixty metre descent to a crossing of a path dissecting a recently cut wheat field. The path was well used, trodden by many folk before us who will have also enjoyed this lovely walk. We met a young couple with a young lad on the crossing, they heading up to Gallows Hill and the beacon. The young ones enthusiasm to get on and hurry his parents reminded me of when I used to be the same impatient adventurer when on trips to the dales and moors of Yorkshire with my mum and dad over 50 years earlier! 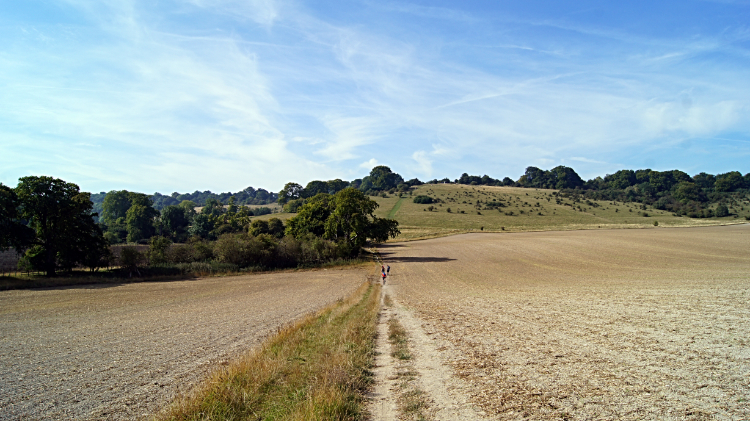 The gap from Gallows Hill to Steps Hill 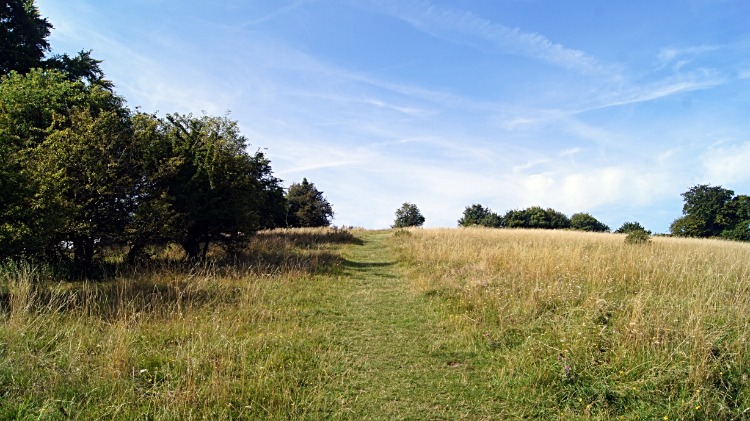 After the fun of the walk from the start to Steps Hill, Incombe Hole, Ivinghoe Beacon and Gallows Hill the last part was quite a shocker. Don't be put off, just prepared for it. The last half mile of the walk includes nearly all of the total climbing. Barring the thirty odd metres earlier on climbing from road to the Beacon and a few rolls up and down along the way, the last steep 65 metres up the east face of Steps Hill to the car park is a right old huff and puffer. Especially when it as hot and it was now for Lil and me. We did not do it all at once, that is for sure. Phew, hard work but worth the effort. What a lovely walk.