Summary: Pen y Fan, at 886 metres high, is the highest peak in south Wales. It is also the highest British peak south of the Snowdonia mountains in North Wales, its status giving it the reputation as one of the most popular mountains climbed in the British Isles. I tend to agree with that assumption as every time I have been on Pen y Fan there has been quite a few people sharing the mountain top with me. However, I have not seen many people on my approaches from Taf Fechan Forest in the south or indeed this one from the north via Cefn Cwm Llwch. If you want company then climb Pen y Fan from near Storey Arms on the A470 to the west. If you want relatively quite mountain walking with spectacular views throughout then I recommend you do one of the two routes I have done, the previous one from the south or this one. 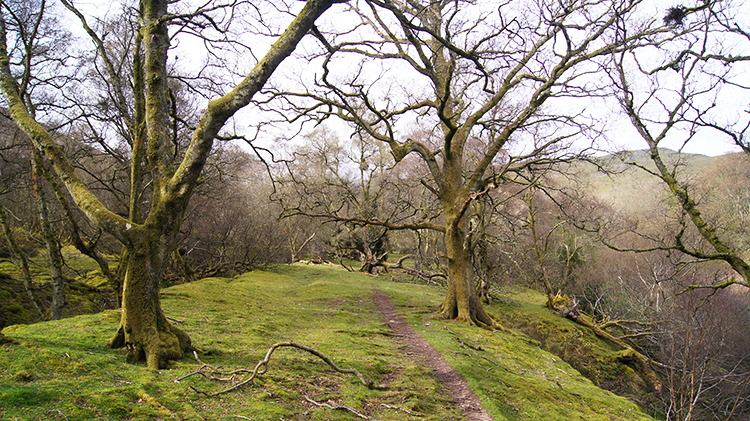 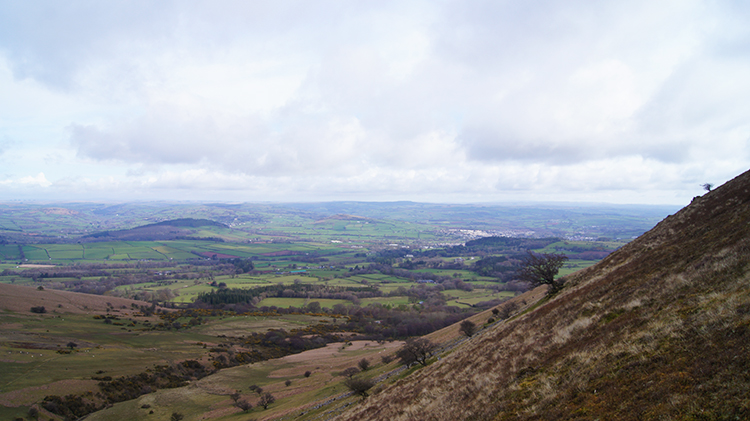 Brecon and the Tywi plain

It was the last day of April and the sun was promised to shine later on in the day. While my wife and the rest of the family enjoyed a lazy Saturday morning in Usk I had been allowed the morning to gallivant. What could be better than a walk up Pen y Fan I thought before a rendezvous with the family for late lunch in Brecon. And so I was off very early in the morning, driving from Usk to Brecon and up the road to the start at a National Trust car park at the road end beyond Cwmgwdi. I was out of the car and walking before 8.30am. Instead of trying to find the path leading to my left up the bank of Allt Ddu or following the track leading to Cwar Mawr on my right I followed a path through woodland and upstream of Nant Gwdi to its source in the gap between Twyn Cil-rhew and Allt Ddu. After the short stretch of old woodland I was immediately on to the climb, pushing myself up beyond 400 metres and into a good Saturday morning exercise. The short rests I took on the climb were appreciated and enhanced by the lovely views I was gaining, particularly those looking back towards Brecon and the plains of the River Tywi. 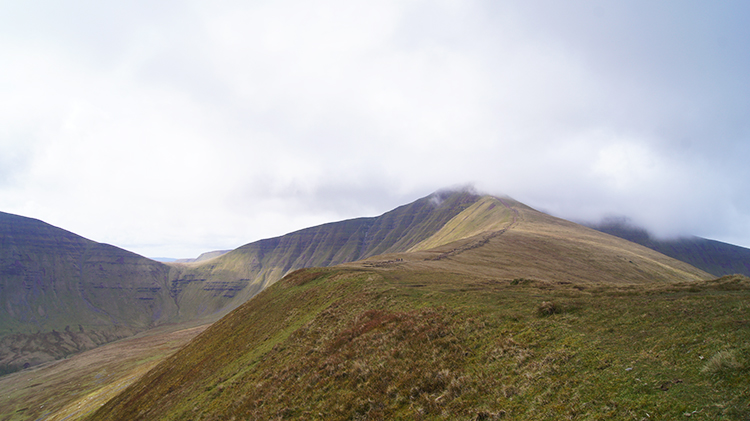 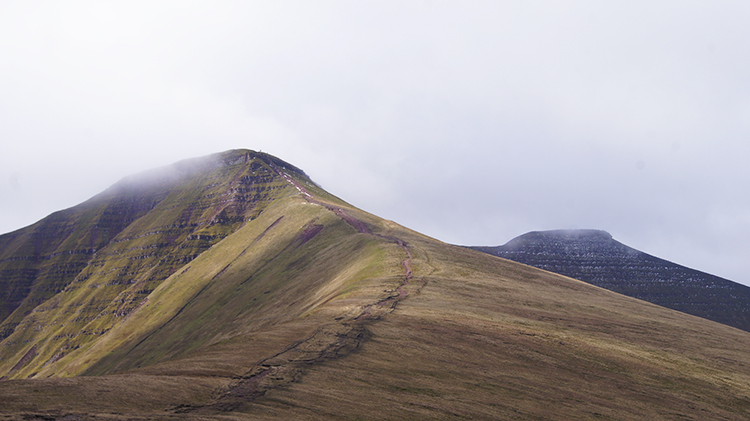 There was no one in sight during the first half hour of my walk, solitude on the mountain being the bonus of making an early start. But as I cut right from the burgeoning watercourse towards the path leading to Cwar Mawr and the Cefn Cwm Llwch ridge I noticed a small group of walkers just ahead of me. I was not along after all. About the same time as I spotted the people I also caught my first glimpse of Pen y Fan. The summit came into view and then went again. Repeatedly as cloud blew over the peak of the mountain from the west. Cloud appeared less and less though as reached and began to cross the superb ridge. I tarried a little while crossing Cefn Cwm Llwch, wanting the cloud to go before I reached the summit and also wanting the solitude during the ascent. 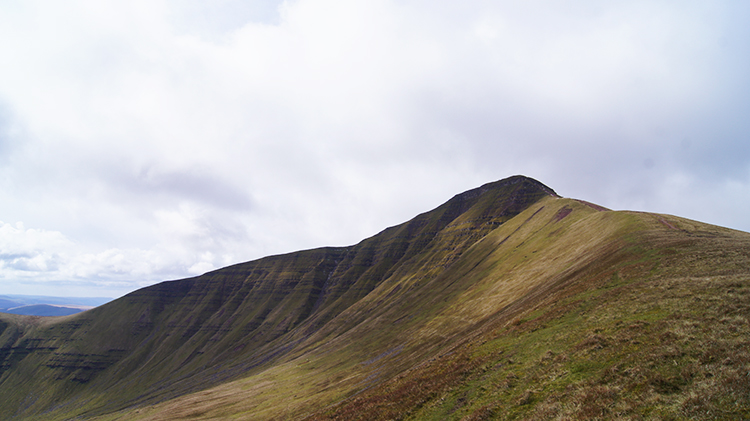 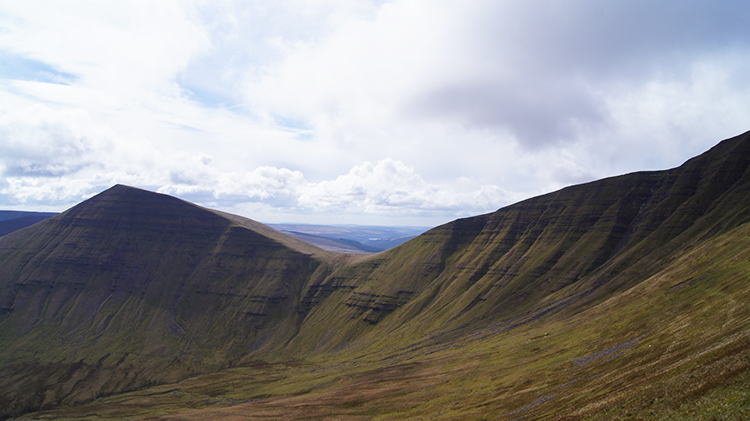 As I got to the far south side of Cefn Cwm Llwch I looked more and more to the superb straight line profile of Craig Cwm Sere, leading down at an angle of about 20 degrees from the peak of Pen y Fan to the gap (bwlch) of Blaen Taf Fechan. From the lowest point of the bwlch I looked to the straight line ascent I would climb later on to Cribyn, set at almost the same angle, about 20 degrees. Before the thrill of those down and ups though I still had Pen y Fan to complete. 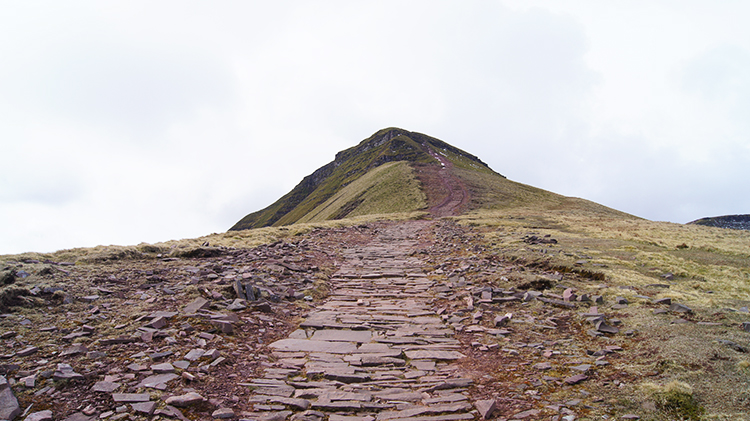 Paved path to the summit of Pen y Fan 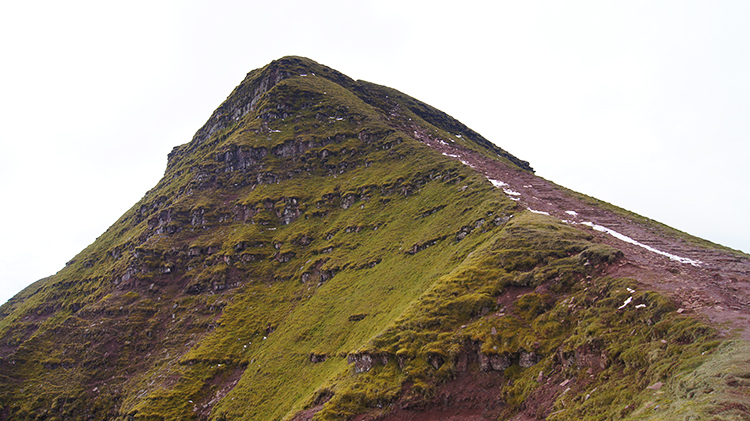 Courtesy of National Trust staff and volunteers I had a paved footpath to follow on my final approach to the summit of Pen y Fan. Such is the result of much footfall leading to severe erosion which in turn leads these admirable workers on a never ending course of footpath repair on the mountain. Managing the footpaths of Pen y Fan is like painting the Forth Bridge. It goes on and on without a break. All to satisfy the appetite of people like me who love these high places. I admire the efforts of all who give their time up to make it better for us. And so, in my small and humble way through membership and donation I contribute. The final climb to the summit was up the steep north facing peak of the mountain but the path made it easy and safe for me. By 10.20am, just less than two hours into my walk I had summited Pen y Fan, having climbed almost 600 metres to do so. 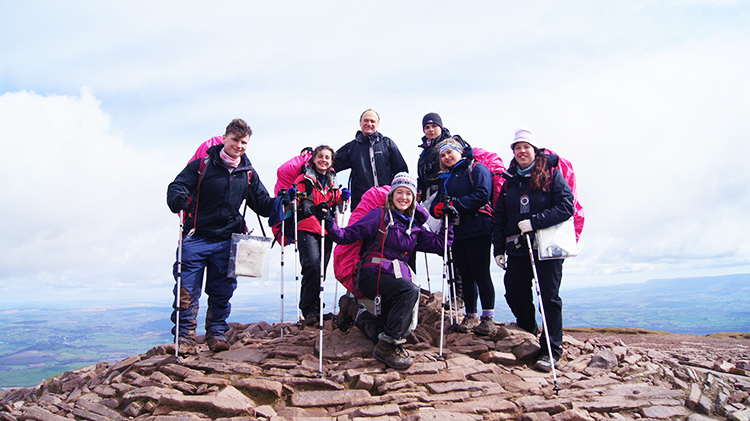 With Poole High School achievers on the summit 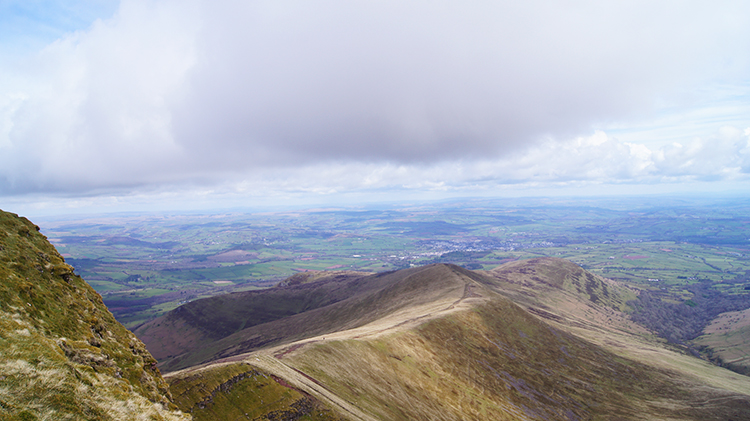 Looking back to my route up the mountain

It was time for a short break, for refreshment and a look out at the tremendous views Pen y Fan affords. These include the one to the south, down the Neuadd Valley to the reservoirs above Merthyr Tydfil and the one to the north, to Brecon, across to the Cambrian Mountains on a good day of visibility to Cadair Idris in the south of Snowdonia. Nearer to hand are local Brecon Beacon favourites such as the Black Mountains and Sugar Loaf near Abergavenny. There is much to thrill the mind on Pen y Fan and I was not the only one enjoying the views. My solitude walk was temporarily over. Plenty of walking groups were either on the mountain or approaching it. I met one friendly group of Duke of Edinburgh Award aspirants who hailed from Poole High School in Dorset. They were all thrilled to be on Pen y Fan on such a lovely day. I enjoyed a chat and a photo shot with the young adventurers. All was good on Pen y Fan. 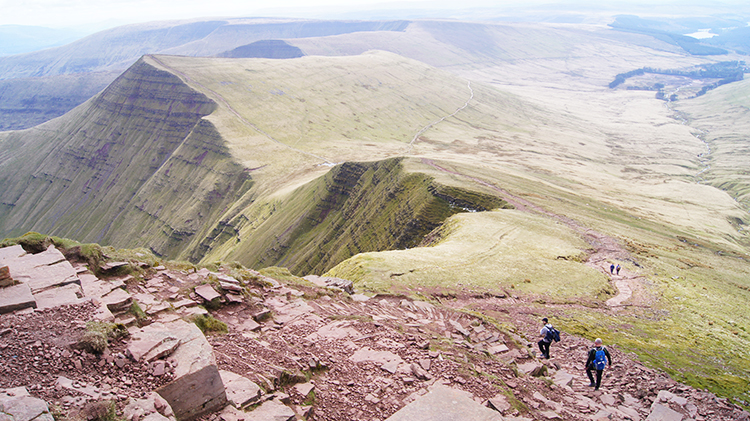 The path from Pen y Fan to Cribyn 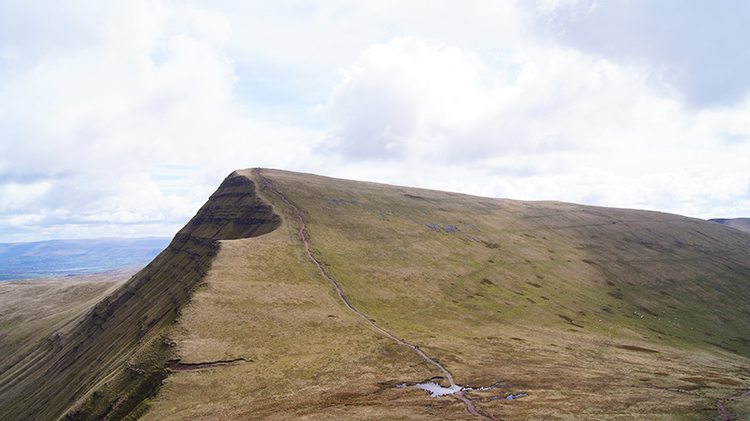 The climb to Cribyn

After saying my goodbye to the group I started my descent from Pen y Fan, on the way to Cribyn, which was my only before trod part of the walk. I had taken the exact same path the last time I had left the summit of Pen y Fan. While familiar, the way down was such a thrill. The view from Pen y Fan to Cribyn is utterly gorgeous, one of my favourite views of all. The shape of Cribyn is just exquisite with a slight even slope leading down to the south. Otherwise it would be a brilliant flat table. And while the fall to the south is easy the way the mountain drops off to the north is anything but. It looks as if it has been sliced off with a knife. A straight cut, a dramatic fall, an impossible path. I lost that incredible view as I descended to the small pool which marks the low point of the path between Pen y Fan and Cribyn. From the water it was head down, climb up. 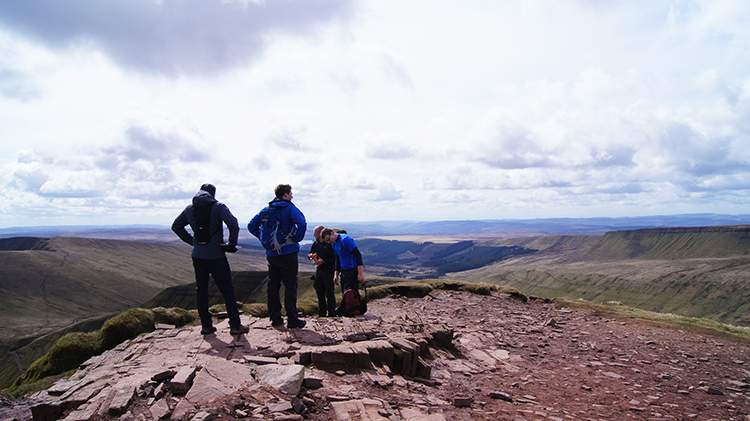 Enjoying the view from Cribyn 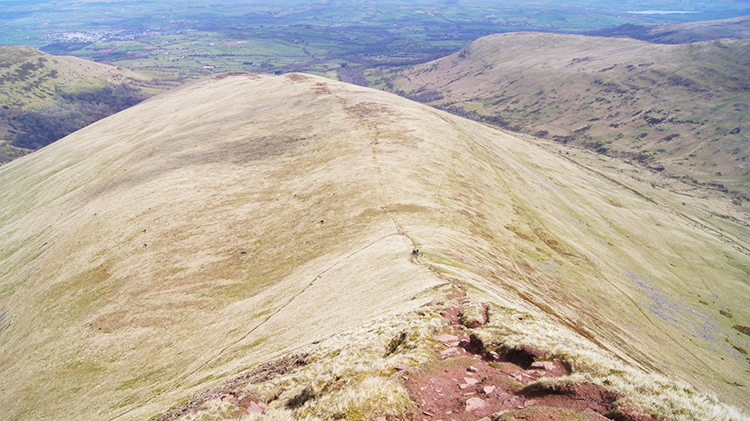 When I had hauled myself up to the summit of Cribyn and after I had stood for a minute hands on knees while recovering my breath I appreciated my final climb of the day. All the ascending of my day was now done, 750 metres of it. It was just past 11.00am. I guessed I would make my lunch appointment in Brecon on time after all. Before then I had more fun on this great walk to enjoy. First I could five minutes of view taking on Cribyn which though similar to those on Pen y Fan allowed me a good view across to the higher mountain. A group of lads enjoyed it with me and after a brief chat with them I headed off the mountain on a steep and somewhat slippery descent northwards down to Bryn Teg. It was indeed slippery, no paved path laid here. A dad and son struggled to climb up and I struggled to avoiding dirtying my backside on the way down. 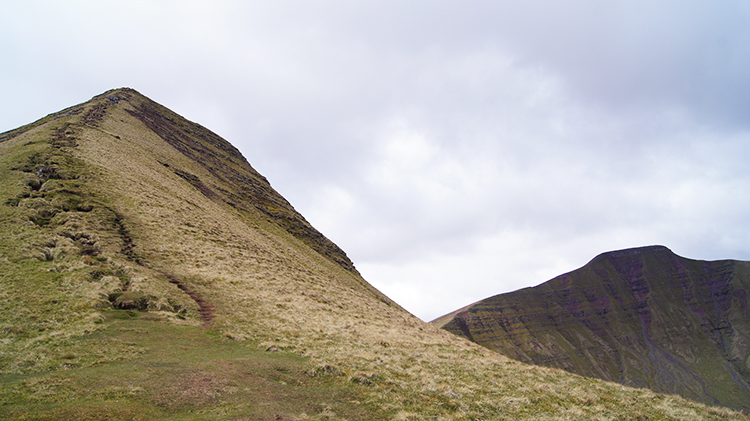 View back to Cribyn and Pen y Fan 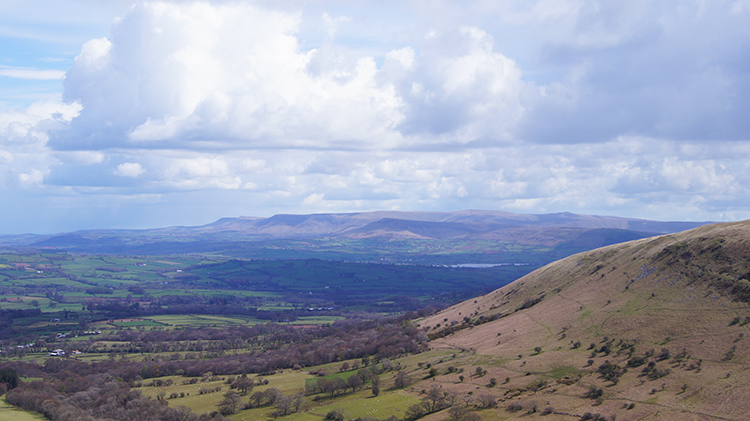 View north-east to the Black Mountains

Looking back up to Cribyn once I had steadied myself on less inclined ground after the steep descent I understood why I had been obliged to tread carefully. The path was rutted with slippage from previous efforts. While the shoulder of Bryn Teg was firm to walk across the steepness of the final climb forced ground to give way. It will rut further over time and perhaps it will have to be paved too. I looked to Cribyn and to Pen y Fan once more and then I turned my attention to the walk home. The crossing of the wide saddle which is Bryn Teg was a lovely upland walk. One I walked at leisure while enjoying the long distance views to the north directly in front of me. 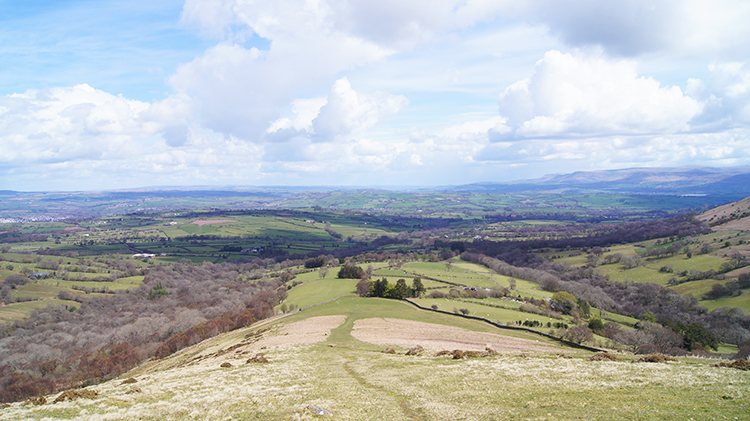 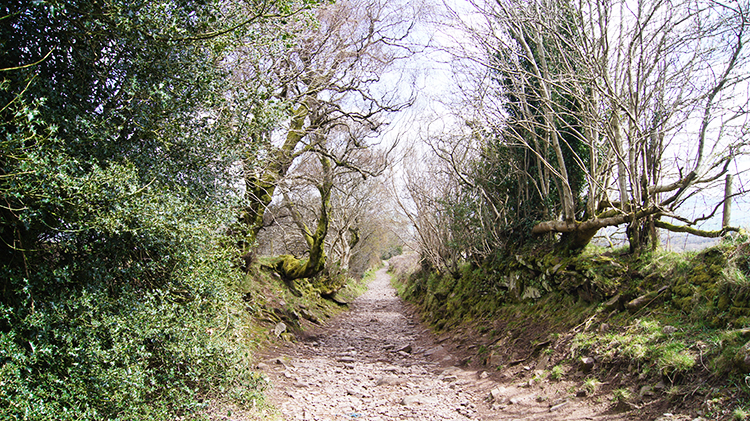 Gradually every step brought me down towards the plains of the countryside due south of Brecon. The light brown and light green of the upland moors were giving way to richer lusher green grasses with every step I took. Before long I would be down to the country lanes and walking across the pasture fields. First though one last look to the hills beyond. And to the trees just below, not yet in the green of Spring. And then abruptly I was down, following a slight Holloway lane towards the farmstead of Bailea. Though a little harder on my feet than the lush and giving ground of the moor the walk along the lane was a pleasant one. 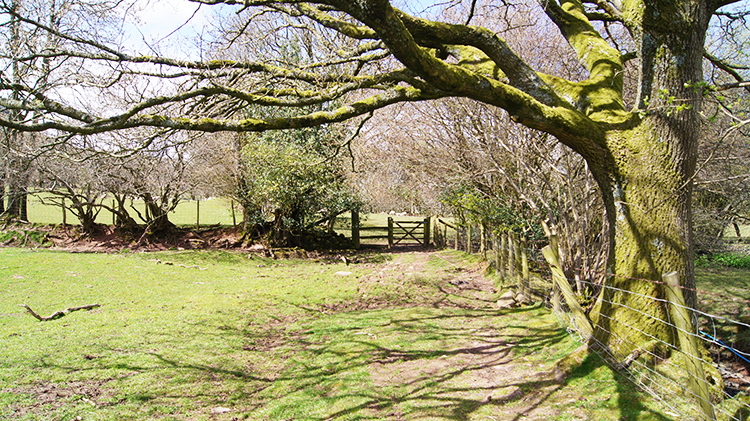 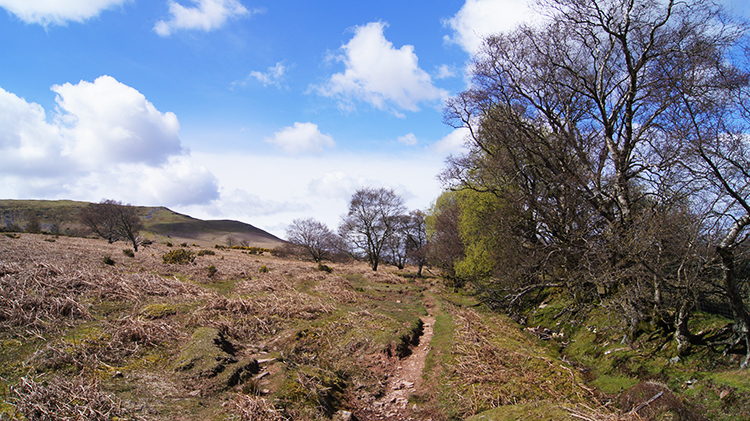 The views were gone now and my attention switched to my immediate surroundings. And though not nearly as exciting as before they were good enough. Eventually. I walked first along a country road and while it was clear of traffic it was tarmacked and high hedged. So a double whammy, hard on the feet and without a view. It was a little over one kilometers of dirge and only relieved when I left it to follow a path across interesting small fields and passing by interesting small farms, much preferable to the big boring fields of the big boring farms in the arable industralised farmlands of the east. And then it was up a bit to low moor on the north slopes of Allt Ddu, an attractive finale which took me back to the car.

I was finished by 12.45pm, a little over four hours after I had set out. On time for my date with the family in Brecon. In that time I had enjoyed a wonderful walk to one of my favourite mountains in the Brecon Beacons. In fact, to two as I really rate Cribyn too. As I finished off the sun had fully broken through and the day was warm and shining. I was warm and shining inside too.