Summary: A walk of over 500 metres ascent with three climbs though none are particularly taxing. The first part of the walk is centered on Taff Vale which is walked through from Castell Coch and past Taff's Well before the first climb to the summit of Craig yr Allt is made. After a descent to Waun-waelod the second climb to Caerphilly Mountain is done before most of the second half can be enjoyed exploring the countryside, tracks and paths of Thornhill and Ridgeway. A final short fifty metre climb is needed at the end to crest a hill in Forest Fawr to return to Castell Coch. 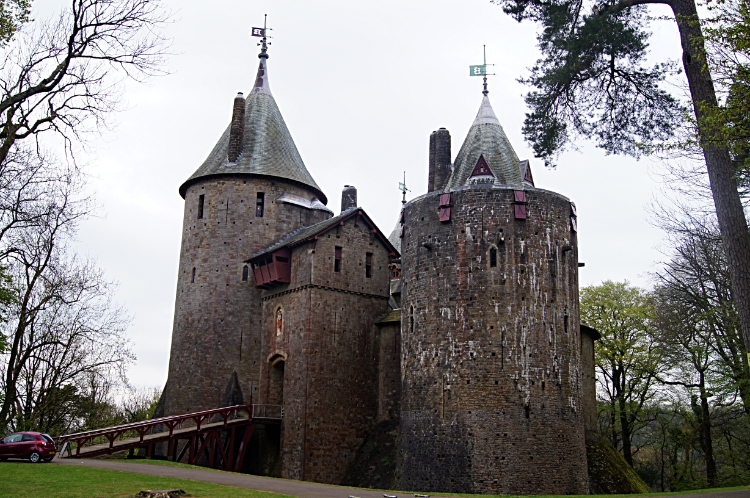 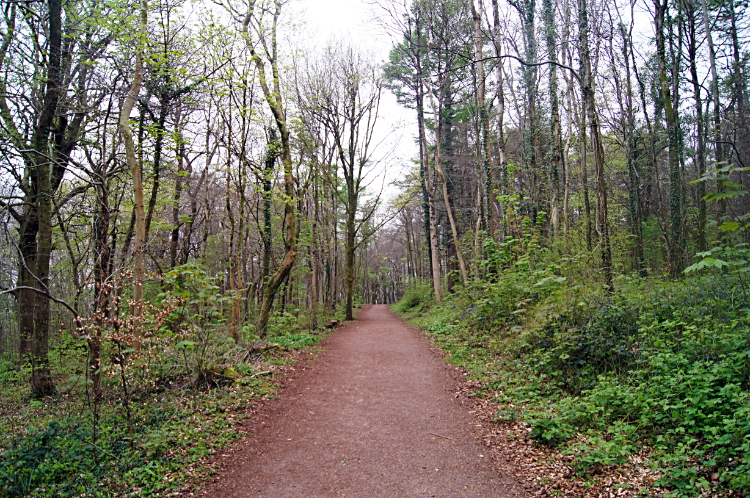 On the Taff Trail leading to Taff's Well

Spring was coming but I could not sense much of it in the air on a cold and overcast morning in early April as I parked up in the free car park at Castell Coch to begin this interesting walk in South Wales. I had designed the walk having recently read about Caerphilly Mountain in a magazine. "How cool for a town to have a mountain with its own name looking over it. I must check that out". Setting off from sight of the fairytale towers of Castell Coch, which I had happened upon during my Wales Coast to Coast walk, I headed north by following the Taff Trail long distance path from Forest Fawr and along what seemed to be the line of a disused railway through the village of Taff's Well, though in the seclusion of the wooded and partly sunken trail I did not see any streets, to reach a point where I had to finish, what so far had been an easy flat ramble, and begin to climb. 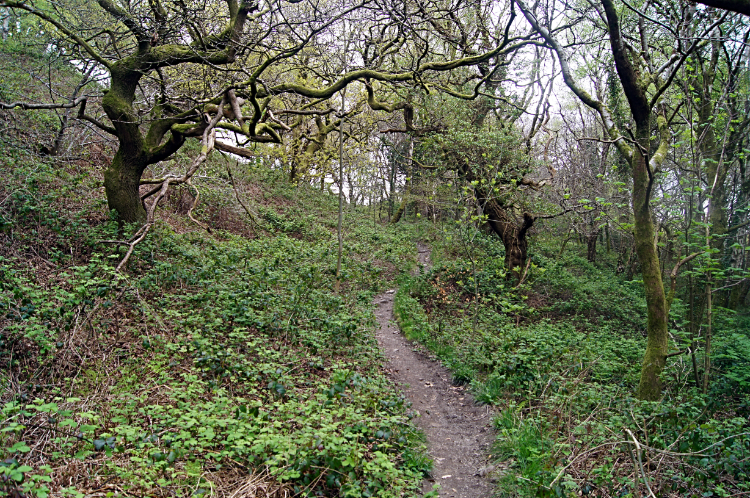 Beginning the climb to Craig yr Allt from Glan-y-llyn 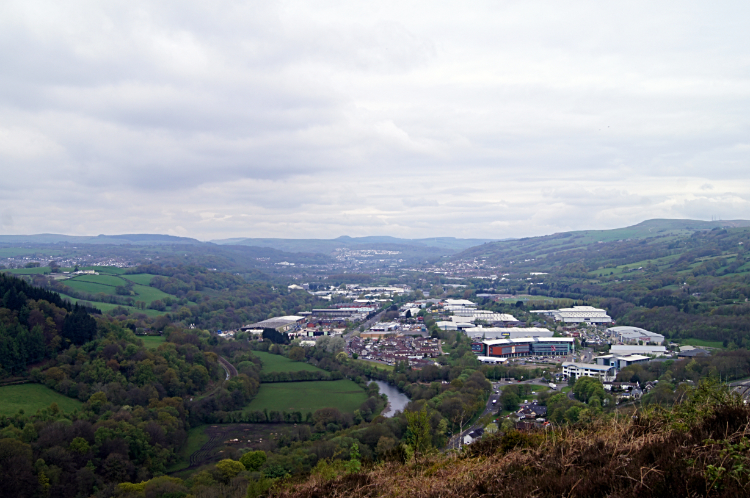 The first part of the climb was in a tree and shrub edged three feet deep holloway, changing to a stretch of ascending within scrubby woodland on a meandering path, to climb above the trees to follow a Z shaped path on the west flank of Craig yr Allt. I was close to the site of disused quarries which worked this side of the small mountain. I could not find evidence of this defunct local industry, such was the determination of nature to reclaim its place, but looking back south along Taff Vale it was clear to see industry was still a major player around here. Factory units and storage units dominated the scene, the size of most of them overwhelming the meandering River Taff which flowed on by the huge complexes. 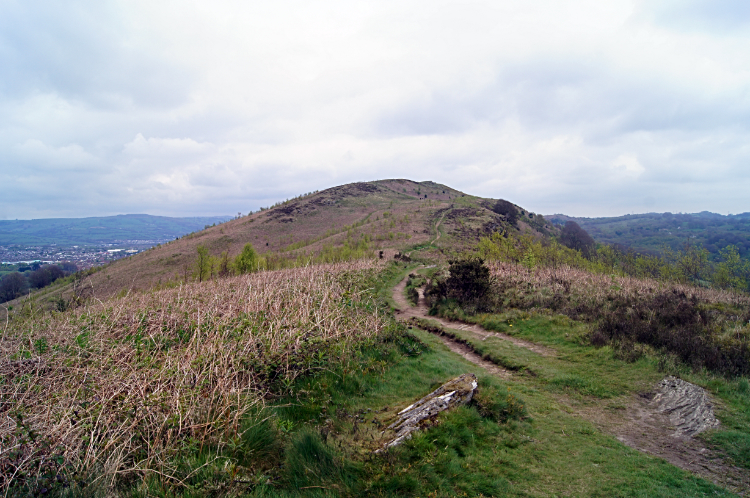 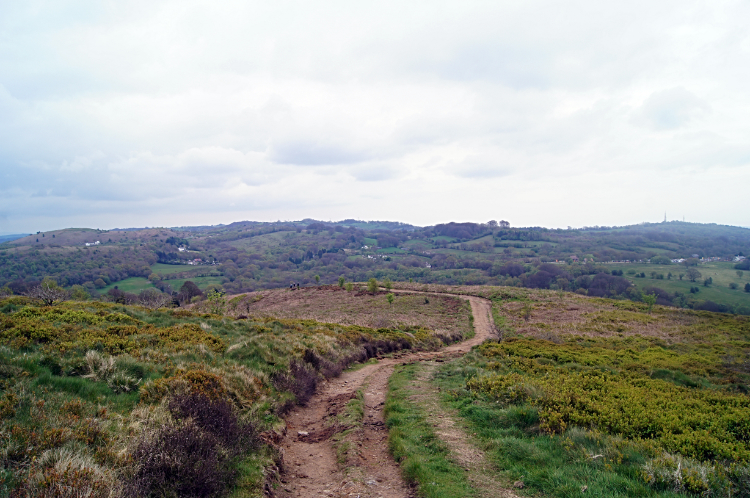 Turning back to the task in hand I set my sight on the inviting ridge leading to the summit of Craig yr Allt. A preserve of pure nature in a land of community and industry, the peace and calm of the mountain was as far removed from the hustle and bustle of life in the vale as one could imagine. And Craig yr Allt was pretty. Very pretty, a shapely upturned longboat of upland, similar in presentation to Yewbarrow, one of my favourite Lake District mountains. Despite the high ground hanging back from Spring by keeping its winter colours of dull green and light brown I knew it would not be long before the grasses and ferns sharing the ground would spring to life again. Following the Taff Ely Ridgeway Walk (Ffordd y Bryniau) across the hill i stopped near the very top, finding a convenient stone seat to sit for ten minutes and enjoy a brew. It was lovely just sitting, listening and watching the stirrings. 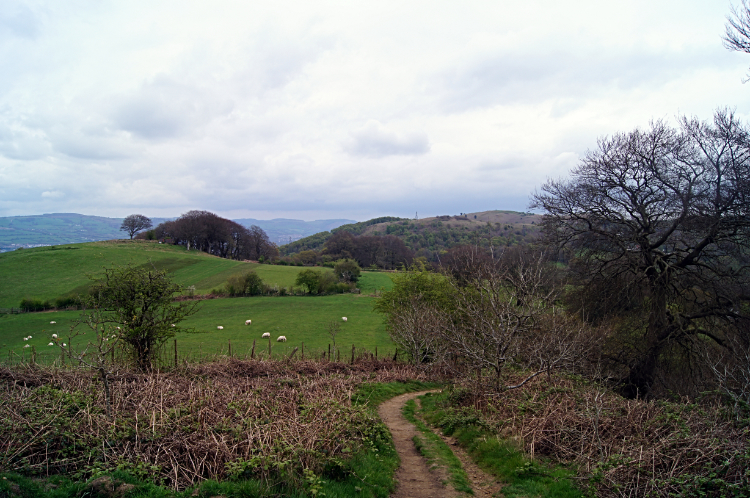 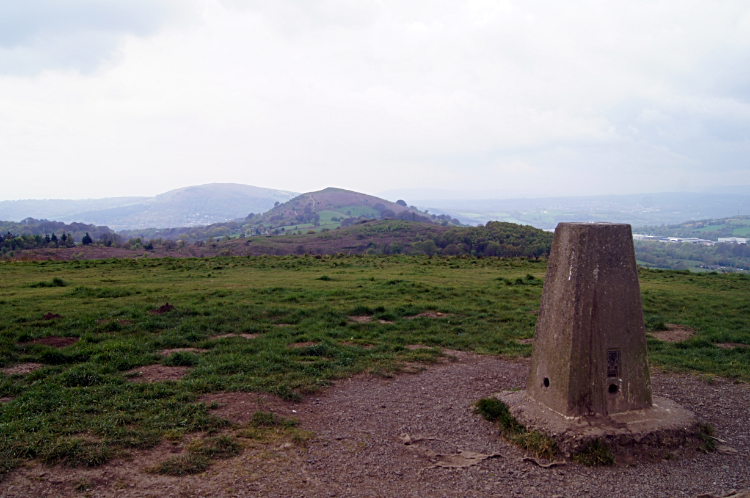 After finishing my tea I stood up from my seat of stone I continued on the ridge line over and down the north side of Craig yr Allt. It had been a very pleasurable time crossing the hill. As I walked down Craig yr Allt I enjoyed the best view of Taff's Well. Not the industrial part this time but instead the pretty lines of community rooftops. I did notice from here Taff's Well climbs quite a bit out of valley, up 50 meters or so to the fringe of Forest Fawr. Further down the hill I came to trees and shrubs once more. Some were very gnarled, showing faces and contortions. Next I came to a post with a Glamorgan Ridgeway Walk sign posted to it. Yet another trail I was following and this one would lead me to Waun-waelod and on to Caerphilly Mountain though surprisingly the Glamorgan Ridgeway Walk does not climb it. And so I went on paths, along tracks, along minor roads and across fields to skirt the south side of Twyn Garwa and reach Watford Road which I walked beside heading south for a hundred metres or so to reach the path I needed to climb Caerphilly Mountain. On crossing Watford Road I followed a scrub lined path for 400 metres, climbing forty, to reach the summit. 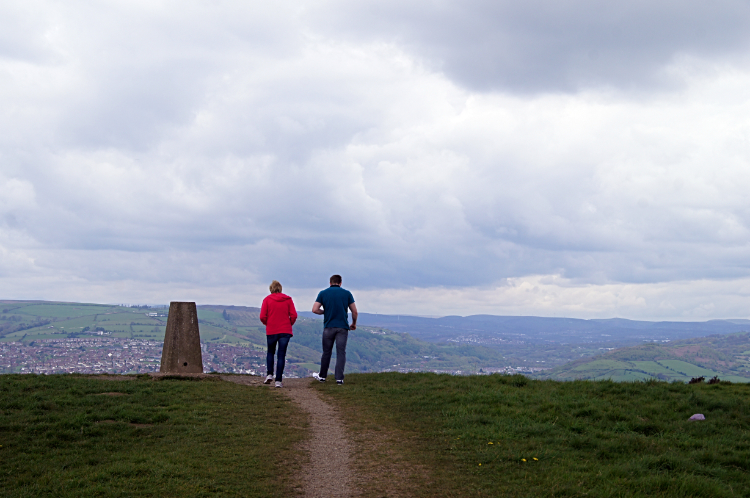 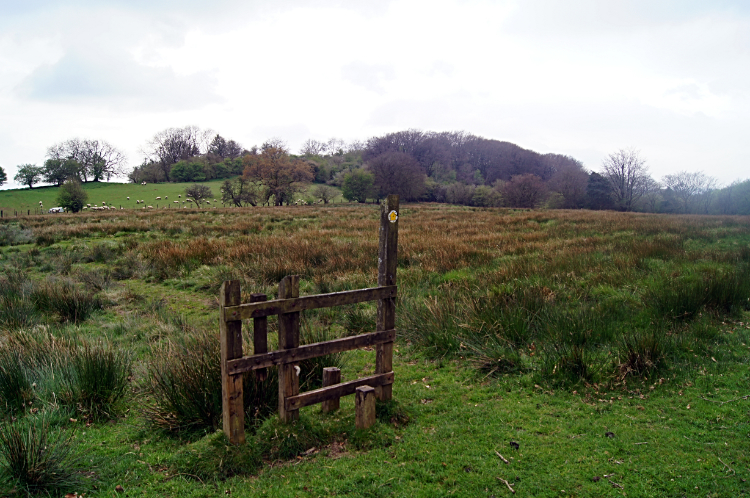 Pointless stile in field near Thornhill

There were two sets of couples on top of Caerphilly Mountain with me. The sun popped out of the thick cloud for around thirty seconds to greet us. It was not staying, just a brief hello. The views from the top were worth the effort of the climb. Looking back west to Craig yr Allt was a delight and directly in line beyond Craig yr Allt was the formidable rounded bulk of Garth Hill. I was instantly taken with the view and thought that next time I am in this neck of the woods I will climb Garth Hill. It does look a beauty. Looking north and east, Caerphilly dominated. South and east, Cardiff was there but I did not twig the city in the gloom hanging that way. Still it was well worth the climb to the iconic mountain, all of 271 meters high. You little beauty! I descended to follow the edge of the B4600 a little way southwards to cross Watford Road again and then cross countryside to Thornhill. I found familiar paths as I had come this way on the aforesaid Wales Coast to Coast. I knew this when I came across the pointless stile - see picture. I did not cross over the stile then. Nor did I now. 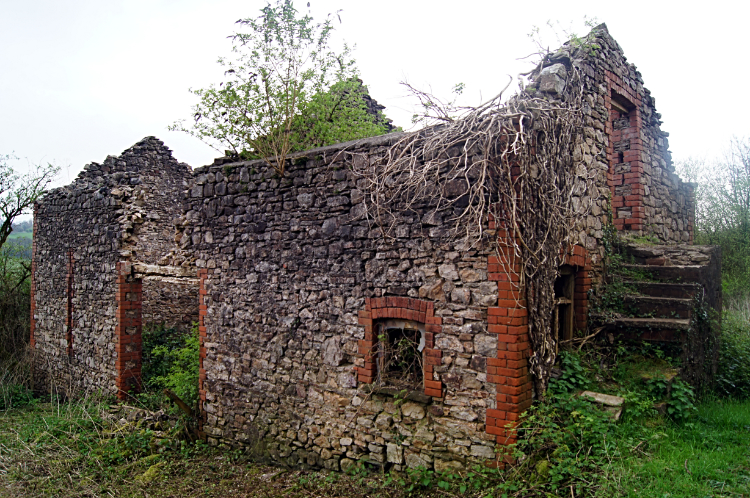 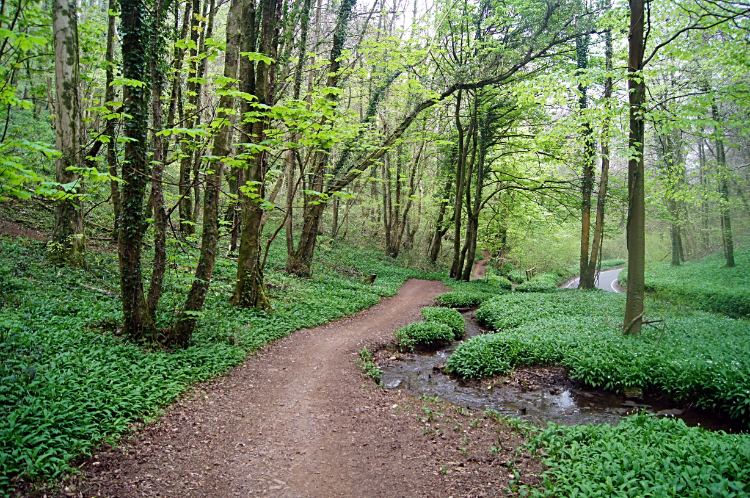 The finale of the walk being familiar, I took time to enjoy the walk. No navigational skills needed now, just recall of recent memory. The countryside was as lovely as I remembered it, only a little muddier. The last time I walked these paths on that epic long distance walk was just one calendar month later than now. But then it was sunny and dry and in the woods Bluebells were in full colour. Now they were just peeking out. Still the wild garlic was filling out its foliage, even now. Though it was not yet giving out its enticing smell it was filling the picture with green. And the woodland trees on the trail were springing out with leaf. Lovely lime greens. This company helped me along and made me smile on the walk to Bwlch-y-cwm and beyond back into Forest Fawr on my return to Castell Coch. It may have been cool and cloudy during the walk but all in all it had been a very lovely day.