Summary: While not involving any mountains this penultimate stage of my Wales Coast to Coast includes 1,195 meters of climbing over 18.4 miles making it the sixth of the eighteen stages in terms of ascent and third of eighteen in distance. A good part of the first half of the walk touches on the 400 meter level in Upper Cwmbran and the middle section involves two steep ascents and descents. The third part is along the Rhymney Valley with a finishing point in the hills just north of Cardiff. What I expected to be a transition stage to reach the edge of Wales capital city proves to be the most delightful walk. 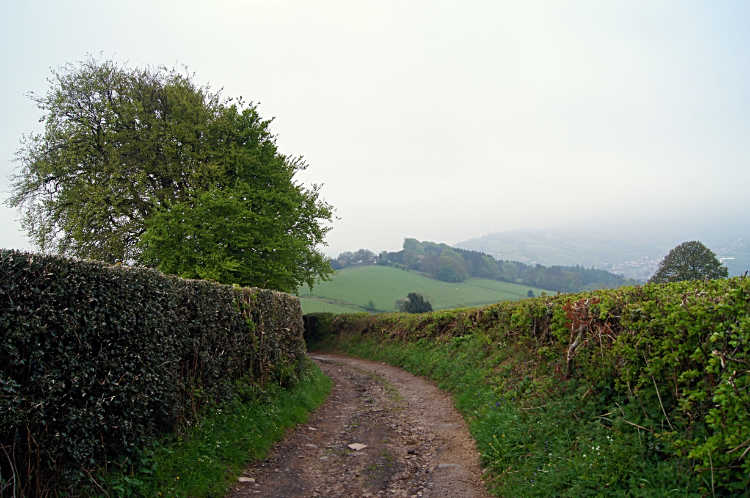 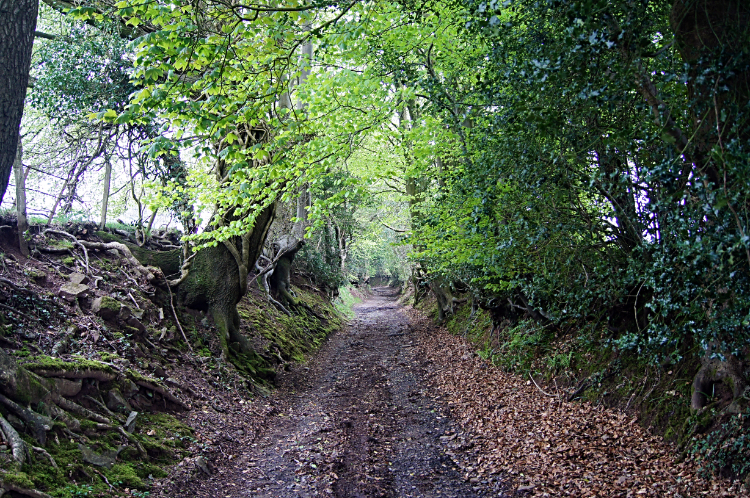 I was not expecting to say this but the phrase for today's penultimate stage of the Wales north coast to south coast walk is "A walk of contrasting scenes with many spectacular moments". I started from Little Mountain, north of Pontypool and descended down terraced tracks on a southerly course to Pontymoel. Here I had my first taste of urban walking for a long time when I had to follow a short course alongside busy roads before going under a motorway underpass to start my first climb of the day to intersect Mynydd Twyn-glas and woodland west of Upper Cwmbran. As soon as I started ascending the traffic noise disappeared. As did most of the people. Except for a few happy souls I met wandering the hills. I then spent the rest of the first half of the day on a roller coaster of a course up and down hills, some of them steep and quite demanding. Descents were steep too. In fact during the day I did over 1,000 meters of climbing during almost twenty miles of walking. 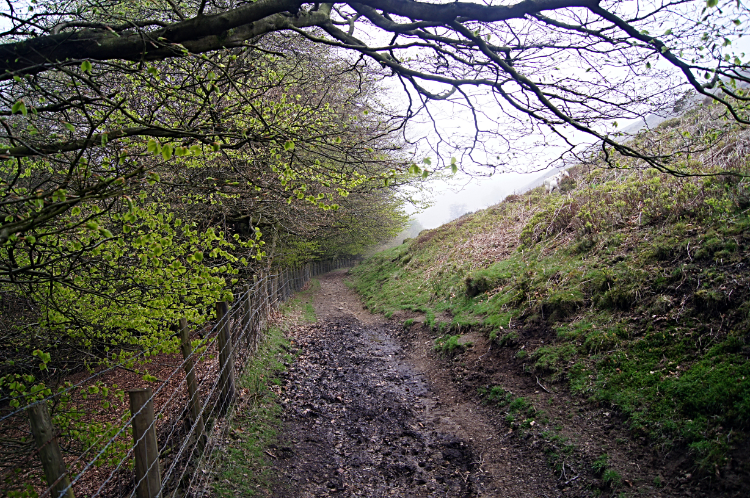 The path below Mynydd Twyn-glas 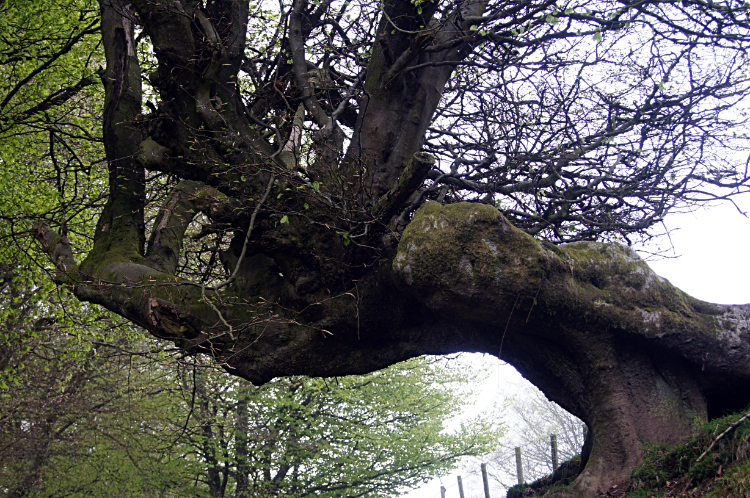 The walk on the lanes and along the paths of Upper Cwmbran was typical of my walk today. Full of surprises both in flora and fauna. I followed the path from Hill Farm near Penyrheol leading south which intersected Mynydd Twyn-glas and Coed Gwaun-y-'ffeiried and while I walked along it I was approached by two lambs. On separate occasions. First a young black lamb and then five minutes later a young white lamb. Both were sweet. The close up views of woodland were lovely too. admire mature trees with interesting shapes to their trunks and there were many of those including one reaching out from the woodland to shelter me from the drizzle which was with me for the first part of the day. The weather was never a great problem bar preventing long distance views until I was a couple of hours into the walk. 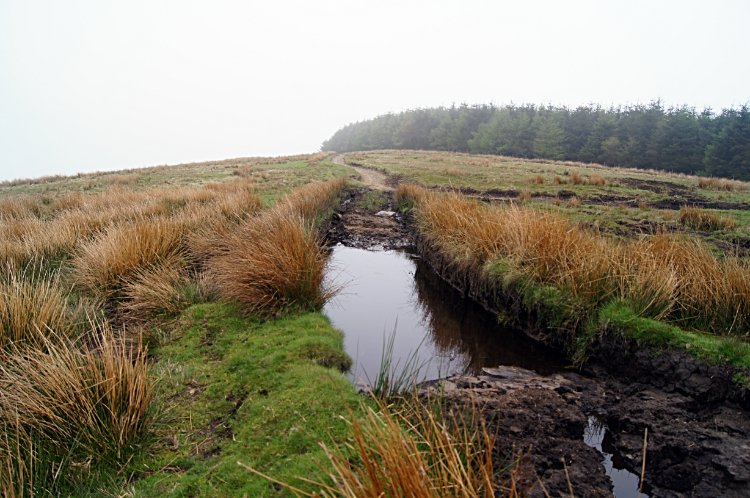 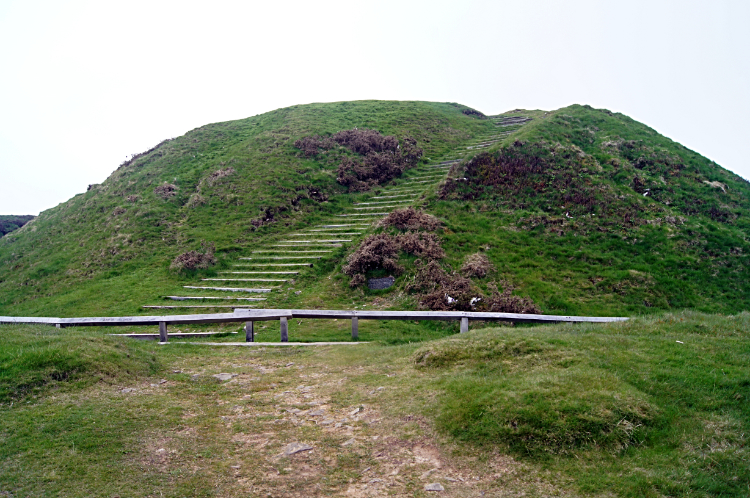 In Upper Cwmbran I passed close to the two Blaen Bran Reservoirs and then I climbed a hill and under some electricity pylons I reached the outstanding ridgeway of the Mynydd Henllyns which I followed for three to four miles. Here the mornings dank weather prevented me enjoying views to the conurbation of Cwmbran below to my left. No big deal I thought as I continued on to reach the Iron Age hill fort cum 12th/13th century motte and bailey castle at Twmbarlwm. I could sense the views here all around the full 360 degrees would be incredible and as if by magic the sun got through the cloud to reveal them just as I was about to leave the ancient site. 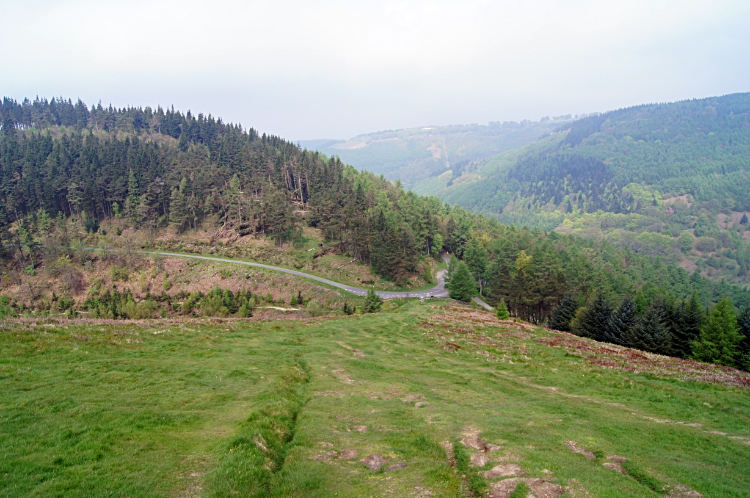 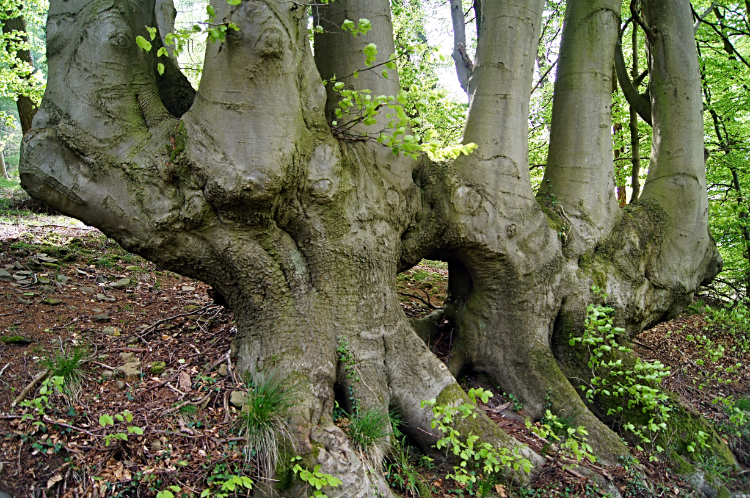 The tree of six limbs in Cwmcarn Forest

With the views opening out in front of me the sense of awe at the beauty of this area was realised. I loved what I was seeing with Cwmcarn Forest spread out ahead of me. It was a glorious sight to behold and I was sensing this walk in the heart of south Wales from near Pontypool to the fringe of Cardiff was going to be an absolute joy. Much better than I thought. Not all my emotion was high in rapture though. With the clearing view showing more and more of my walk ahead I sighed at the chasm that stood between me and my next hill I had to climb on my route. Mynydd Machen looked like Snowdon from here. Looking at the map I saw I immediately faced a steep 350 meter descent to Risca and then an immediate and abrupt 300 meter climb up Mynydd Machen. "Take it bit by bit" I thought and on the descent through Cwmcarn Forest I enjoyed the first bit which included more sights of incredible mature including the remarkable tree of six limbs. 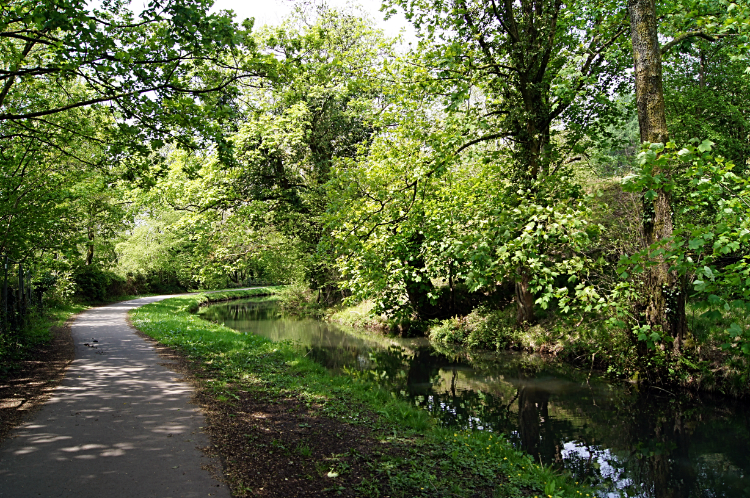 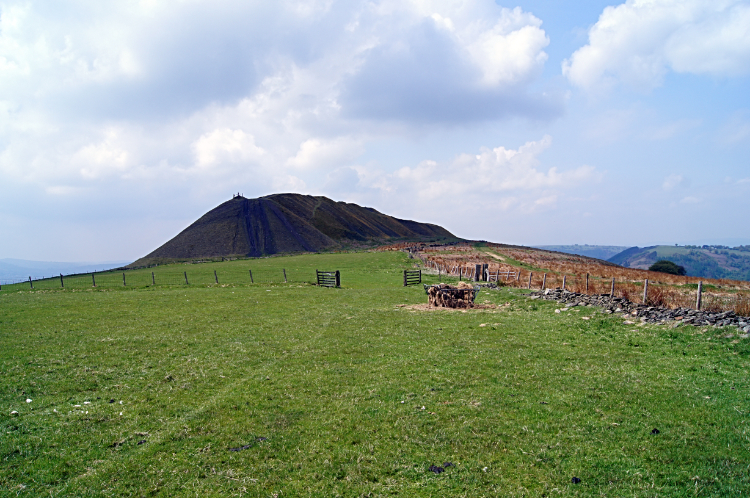 To break the continuation after I had made the steep descent I stopped at a tea shop by the Monmouthshire Brecon Canal in Risca. At the canal I noted how many times I had met with it on the walk. First in Pencelli, then near Crickhowell and now here. What I did not realise was that the canal is not one single entity but a network of spurs too. At the lovely canal side cafe and while having a cup of tea and a bite to eat I once more looked up at Mynydd Machen and contemplated my climb. First though and on resumption of the walk I followed the canal to Risca and crossed the Ebbw River to challenge the hill. 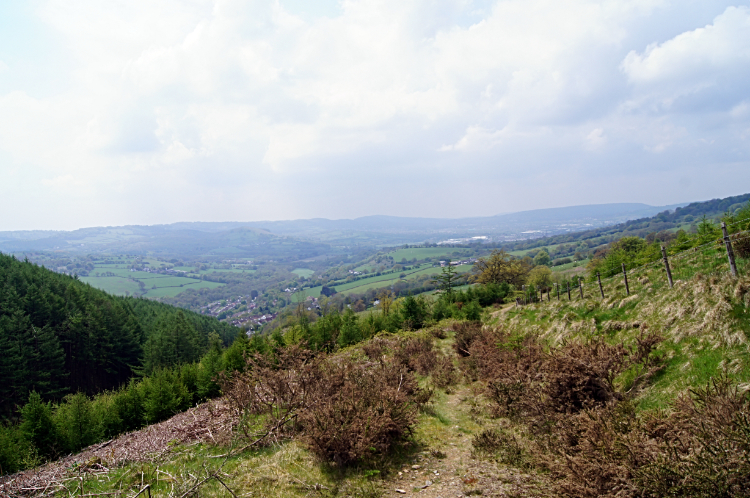 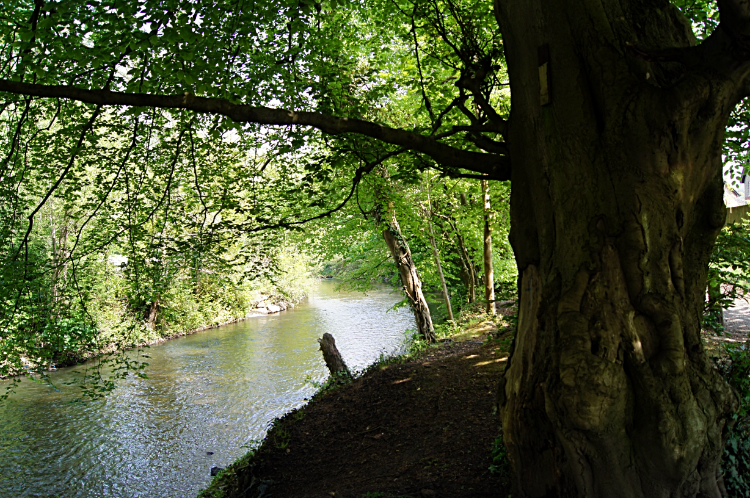 The climb of Mynydd Machen turned our to be a tough haul. First I hauled myself up through steep paths through woodland. Then on to open land paths I went, all the way to the top of the hill. I was sweating with the effort, not least because the early morning clag was now fully burned away and the sun was blazing down. It had warmed the air quite quickly and the day was getting warmer and warmer. I loved that but still it caused me to get a good sweat on. Once on top of Mynydd Machen I noticed an extra hill on top, a huge ridged heap of slag from mine workings. It was there for industrial heritage I guessed. From Mynydd Machen I descended steeply to Machen, part of the descent through a field which was employed as a car graveyard. It was not pretty. Apart from that piece of human detritus though the walk remained spectacular, over shapely hills, into deep valleys and our again and on super ridgeways. The walking opportunities in this part of the world are so undervalued. It is stunning country. 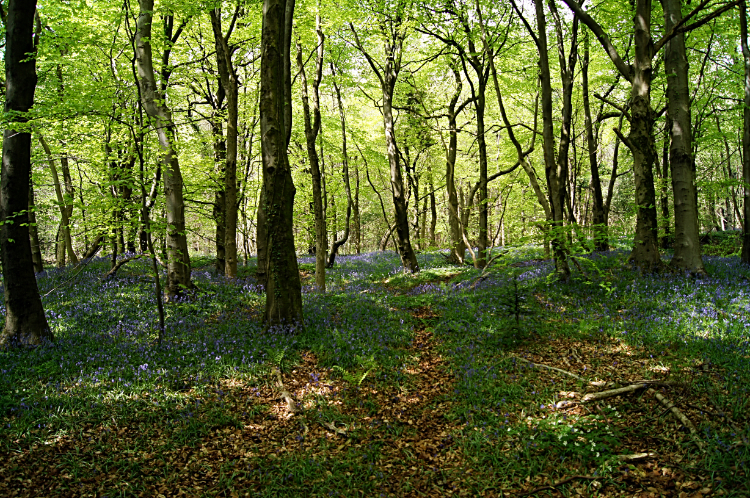 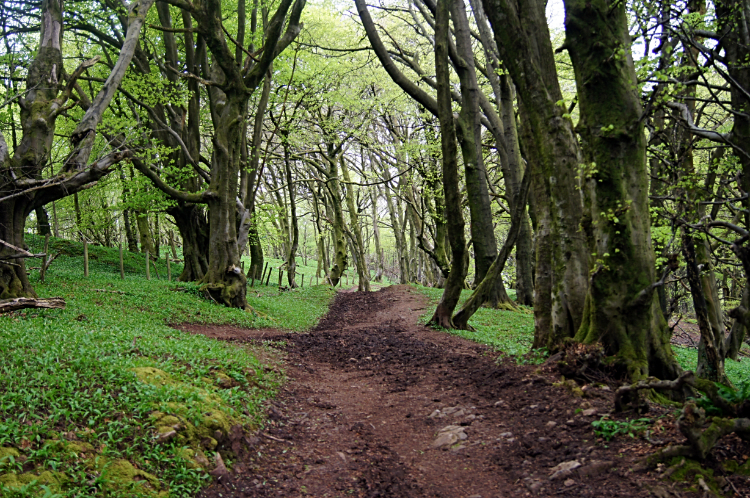 After Machen the walk changed completely - for big hills and deep valleys substitute glorious woodland and dingle dells. Coed Cefn-pwll-du was a revelation, a joy, a place of wonder. First I accessed woodland on the hills slopes by a lovely holloway and then I walked in the midst of lime green foliated spring coloured leaf and majestic profuse brilliant Bluebells. They were everywhere in not just this brilliant place but in the other woods I walked through to my finish beyond Thornhill and on the northern fringe of Cardiff. From Coed Cefn-pwll-du to Craig y Lan and to Coed Cefn-onn. All on the path following the Rhymney Valley Ridgeway. What a joy. 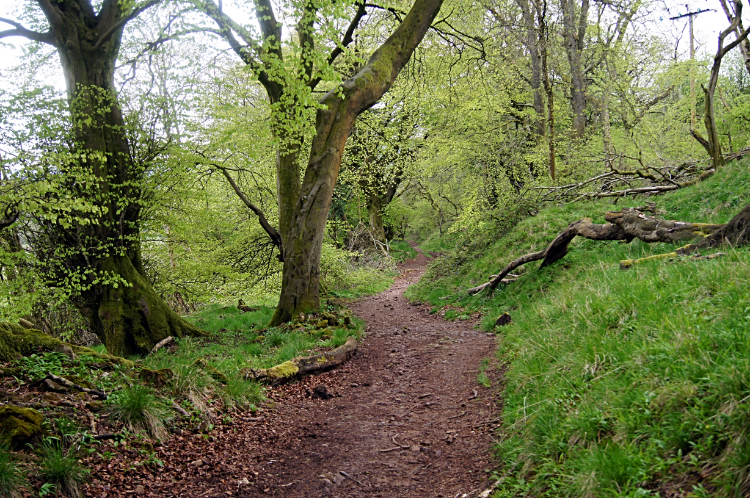 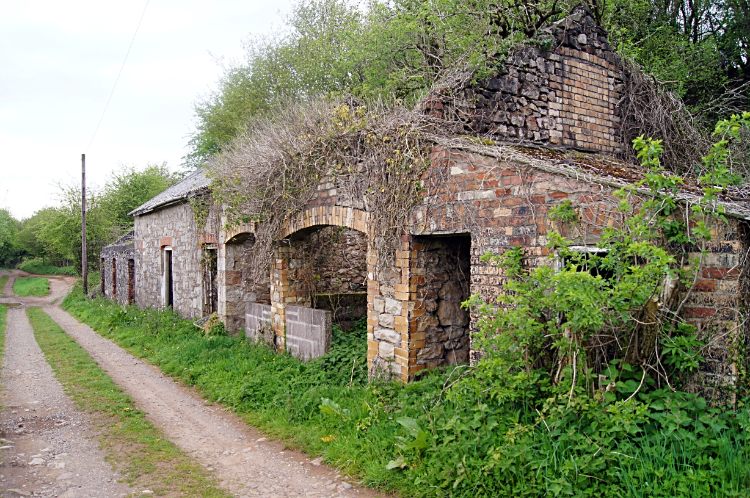 The final flourish on my last but one walk through super dooper Wales was my ramble woodland trails past Ridgeway Golf Club near Thornhill and through woodland to Bwlch-y-cwm. During the final mile I passed quite a few abandoned buildings, possibly a woodmans cottage and some store houses. They will no doubt go for a song when released for conversion. At Bwlch-y-cwm I stopped and waited to be picked up by Lil. Ten minutes later she picked me up. Tomorrow is my last day on this epic adventure, a 10 mile walk into the city and along the river to Cardiff Bay. I look forward to finishing but I will look back always and at length to the remarkable journey. More on that tomorrow and over the coming days. For now, bravo South Wales. You have surprised me with your diversity for walking and with your beauty.