A personal record of my walk in 1999 with written journal and photographs. Tracklogs for GPS units and for use with Google Earth are available for download for each stage.

Note: The daily records are from my diary written during the course of the walk with additional notes in italics. 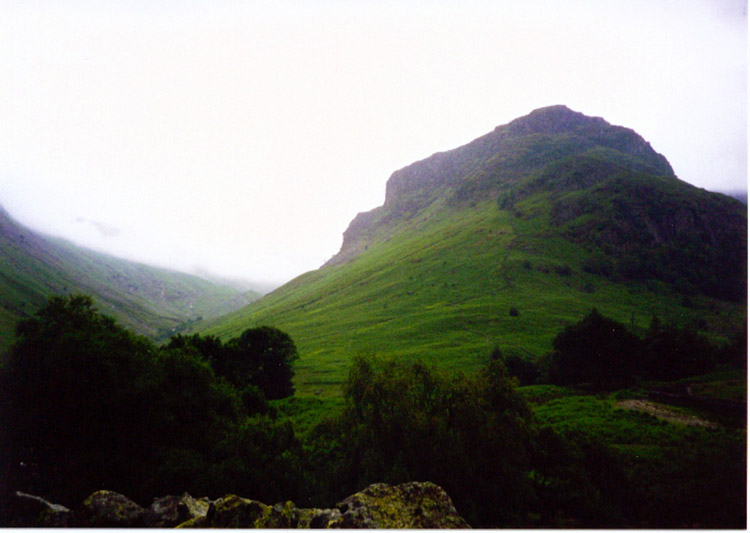 Eagle Crag is passed on the walk to Greenup Edge 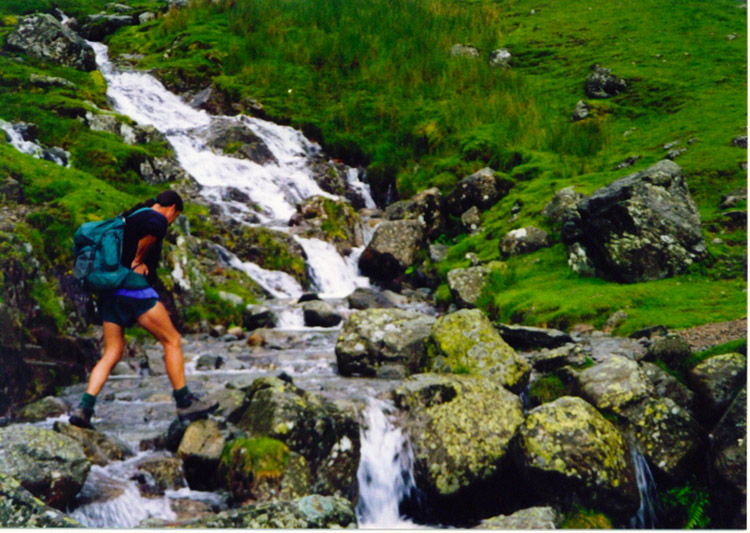 "It's not drizzle, It's pissing down" Deke might as well have been using a loop tape walking into Grasmere but then I suppose we were both wet. Earl Grey tea, toasted teacakes and scones were the faith and energy restorers thus in a cafe in the village. It was a noisy in Borrowdale last night and for once it was not my walking companions snoring (It's all due to his nasal abuse apparently - a youthful thuggery where he acquired a broken nose) No, it thundered, lightened and poured it down for the night. Flashes of light pierced my eyelids and noise rapturously wakened me from time to time. Despite the interruptions of the night I was remarkably fresh the following morning and we set about our business after our usual hearty full English breakfast. One small pang on leaving Rosthwaite, the 16th century cottage we stayed in and its most charming host we were leaving behind. I'll stay there again given the opportunity. Due to the low cloud and drizzle that accompanied us on our early morning walking Rosthwaite to Grasmere was a chore, the walk up the waterfalls of Greenup Gill a delightful excursion from the drudgery. The drizzle, as stated earlier did get a little heavier as we entered Grasmere. The tea break was vital and appreciated. 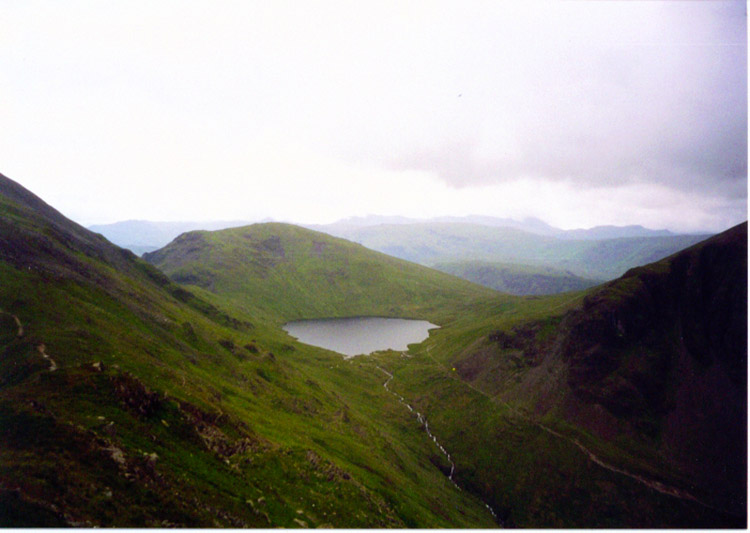 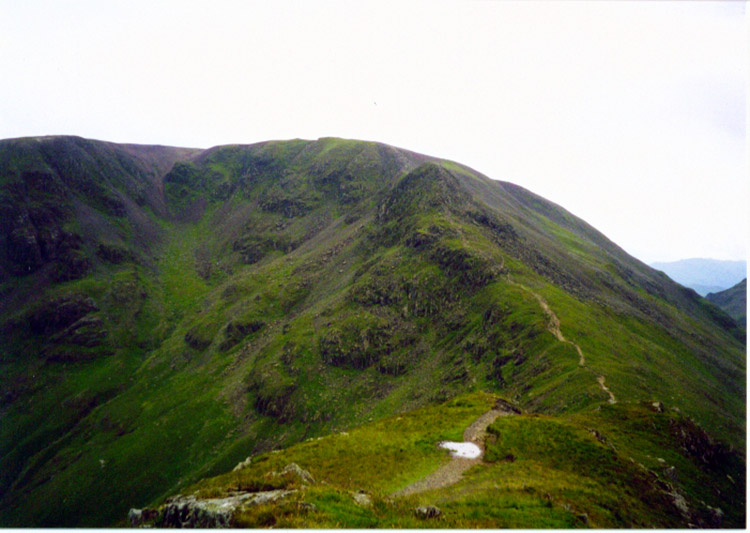 After Grasmere though it was a different story. The cloud lifted and the rain abated. A genuinely easy walk from Grasmere to Grisedale Tarn and then up Fairfield. Wow, what an ascent! - fantastic hard work, almost vertical at times but thrilling and great. And then the thrilling little scrambles over minor crags followed by a more gentle ascent up Sunday Crag itself. And the panoramic views of the whole area from Morecambe Bay to Solway Firth, Scotland and inland around 360 degrees back to Morecambe Bay were exceptionally stimulating. Once off Sunday Crag the views down to Patterdale were equally glorious and most welcoming. A steep and sometimes difficult descent on bums at times and then we were there. Brilliant. 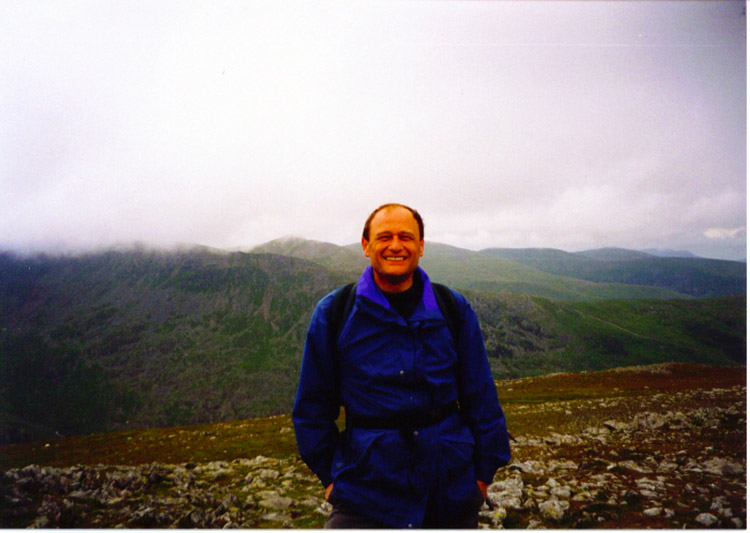 All smiles on St Sunday Crag 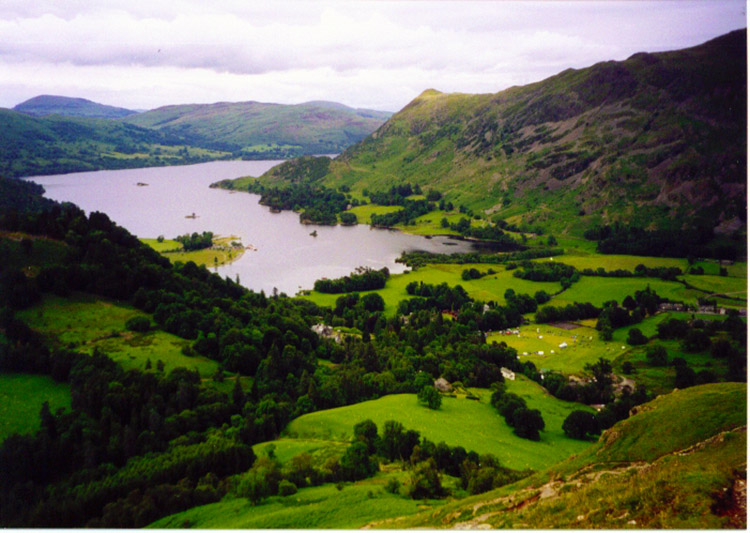 The climb up Fairfield from Grisedale Tarn is not indicated on the official Coast to Coast maps and guidebooks but well worth it if you are feeling adventurous and up to the stiff challenge. It is a very steep ascent. There are 3 alternative routes from Grisedale Tarn into Patterdale, the one we took to Fairfield and St Sunday Crag or the lowland route following Grisedale Beck which I took 5 years previous or the ascent of Dollywagon Pike, Nethermost Pike and Helvellyn. This option offers the crossing of Striding Edge, the Lakes most popular scramble. I had done this walk a few weeks earlier and thus took the St Sunday Crag option. Both high level routes reward you with stunning views of the Lakeland Fells and are recommended if the weather is set fair.