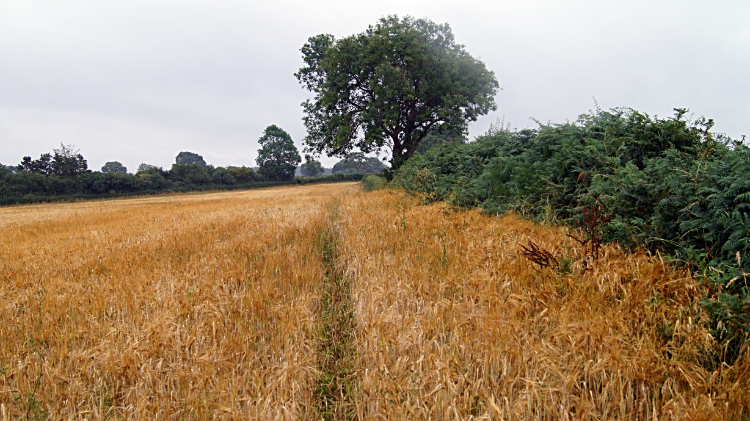 Walking a wet line to Grinshill 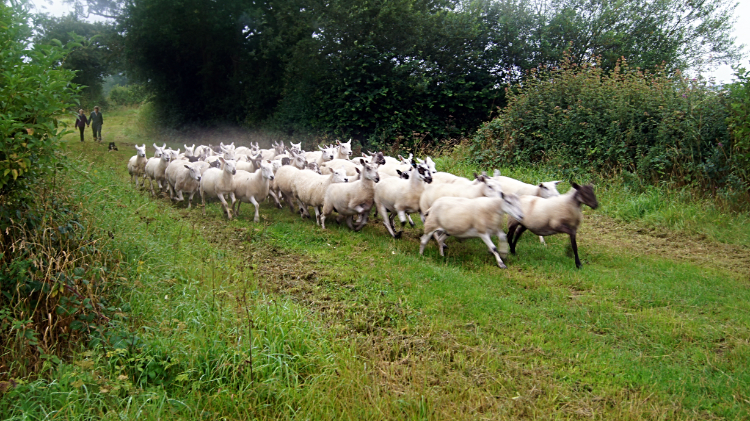 Taking the flock to pasture

After a nowhere near ideal first day of my Shropshire walk I hoped for better on my walk from Wem to Shrewsbury. Alas, my walk out of the town of Wem was far from ideal, the Shropshire Way leading me south by the roadside of the B5476 in damp conditions. Every time a car or truck passed I had to duck into the hedgerow to avoid the spray. Fortunately I soon left the road to head south across big fields to Tilley Green and then past Trench Hall School towards Grinshill. It was not long though before my trousers were soaked to knee height though. The path led through lengths of long grass and across fields of grain. The wet made it worse. I was also climbing, albeit slightly, but with the conditions and the clinging damp it all contrived to be quite sapping. I was pleased to get a respite near Upper Trench when I was requisitioned to help a farmer drive his flock by bocking off a field entrance I just happened to be standing beside. That was fun. 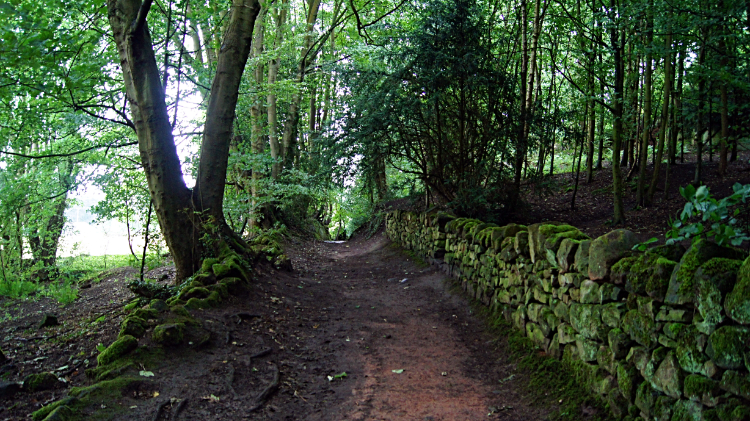 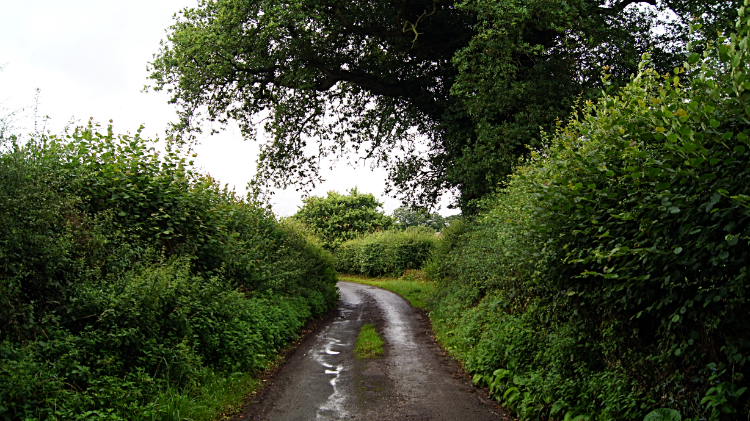 After completing three miles of walking over one and a half hours I crossed the road linking the villages of Clive and Preston Brockhurst and on crossing I then climbed the north bank of Grinshill Hill to access Corbet Wood. It was nice to be at height again. Even though I had only climbed to a little over 150 meters high I was at least on a hill; the first in two days since leaving the Sandstone Ridge of Cheshire. I had no view from this particular high point though, the Shropshire Way path across Grinshill Hill being deeply entrenched within Corbet Wood. From the high point of the woodland path I descended to the village of Grinshill, set on the south side of the hill bearing its name. Grinshill is impressive, a village full of outstanding houses. I was not surprised to learn that there are twenty listed buildings in Grinshill. I did not know at the time and nor did I know then that I had just crossed the sandstone hill which provided the material for the door surround of 10 Downing Street and the Prime Ministers country residence of Chequers. Anyway, after admiring the architecture of Grinshill I continued on from the village by following road, fields, road, woodland and more fields to the village of Hadnall. 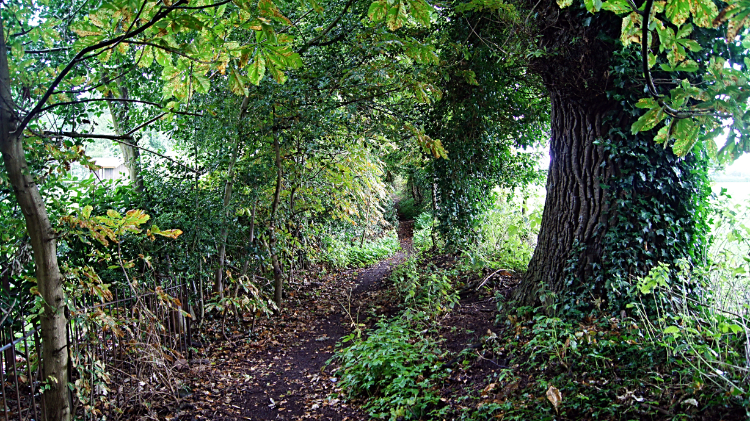 Copse of cover at Hadnall 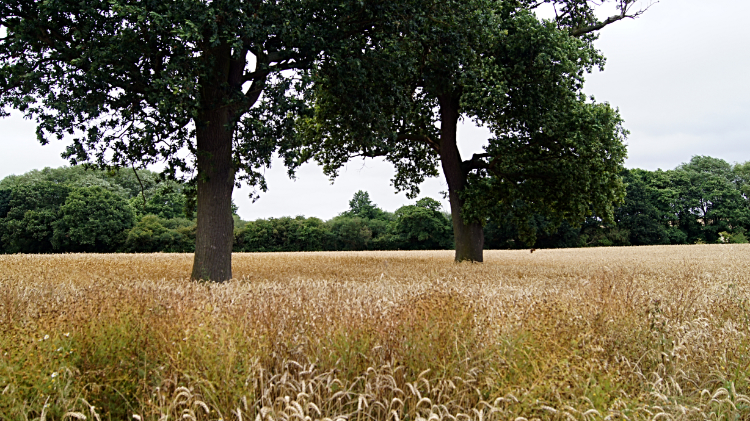 Though rain had ceased to fall it remained a chill damp day. Keeping going kept me warm. Still in the heart of the most rural part of Shropshire I crossed more fields, some arable, some pasture and I walked more avenues of copse and small woodlands. I also walked a quite long, say 400 meter stretch of farming access road, newly concreted, to reach Sansaw Business Park. The concrete was covered in cow poo; and as it was wet I slipped and slided on the poo, forced to leave the concrete pad before I had a mishap and thus obliged to walk on the field edge. From the Business Park, situated on the site of Hardwicke Stables, I crossed another big field of pasture towards a bank of woodland just north of the village of Hadnall. As I did so I watched Buzzards circling in the sky above the trees. I had already noticed there are lots of Buzzards in this part of Shropshire. Their peeee-uu call was constant. From Hadnall I continued on through Astley and Upper Astley before carefully crossing the A53 to reach more big fields of golden wheat which I crossed to pass Wheatley Farm and then head towards Ebury Hill. 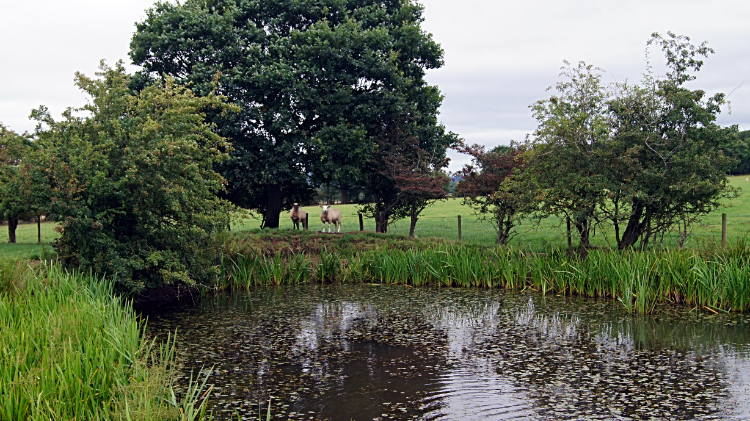 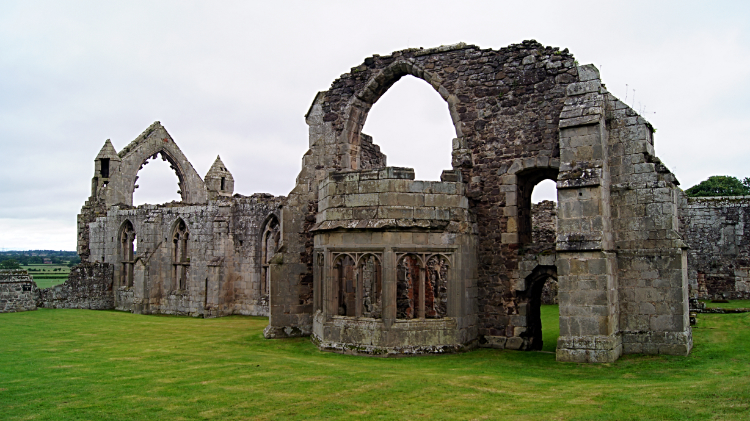 I made my second climb of the day, not a big one, only thirty meters or so to arrive at a pretty dew pond north-west of Ebury Hill where I stopped for ten minutes to share the scene with a group of Sheep enjoying their saunter around the fringes of the pond. The climb to around the 100 meters mark had helped change the character of the countryside. It not longer felt arable at all and nor was it. The grain was gone and I was crossing a field or rough Sheep pasture towards Ebury Hill, the site of a hill fort. I found it was now the site of a huge sprawling caravan site so I moved away quickly, heading down a lane from Ebury Hill to reach the more appealing site of Haughmond Abbey. Having membership of English heritage I took time out from my Shropshire Way walk to have a good look around the site of the ruined medieval Augustinian monastery. The site of the abbey on the west facing edge of Haughmond Hill commanded a great view to Shrewsbury and to the hills of the Welsh borders beyond Shropshire's county town. The three humps of the extinct volcano Breidden Hill was the stunning highlight. 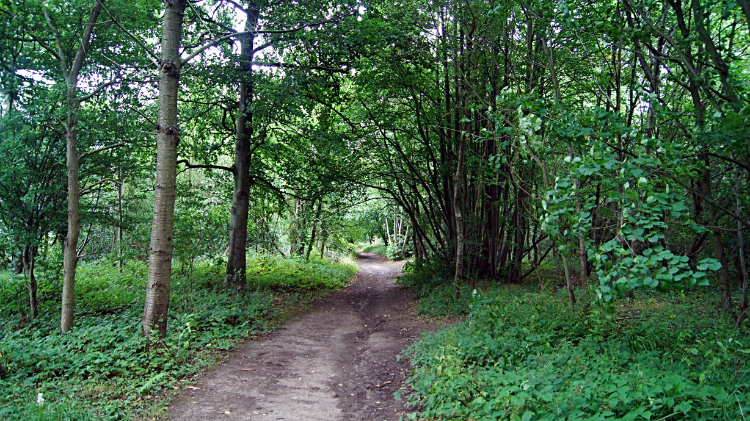 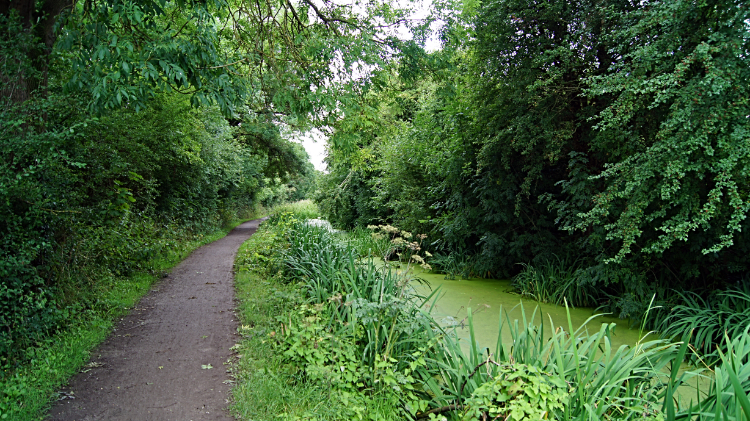 From the abbey my walk continued by crossing the B5062 and accessing Haughmond Hill Forest. The walk through the trees was very interesting with ancient gnarled Oaks and even a Green Man who I confess eluded me. Plenty of collapsed trees had their stumps left standing which I am sure Woodpeckers and other wildlife appreciated. And fungi, which was prolific. Some of it a colourful shade of yellow. From the forest I emerged into the open near Brickkiln Bridge which I crossed to reach the hamlet of Uffington on the east fringe of Shrewsbury. After the village a wooden sign welcomed me to 'Old Shrewsbury Canal Countryside Site'. Sunshine welcomed me to a better day at the same time. It was immediately warmer. I liked that and with a smile i followed a path beside the disused Shrewsbury Canal towards Pimley Bridge and as a sign indicated also towards Ditherington. The disused man-made waterway was overgrown with reeds and green over with algae but the wildfowl I saw in the water loved it. There were plenty of Coots enjoying themselves. 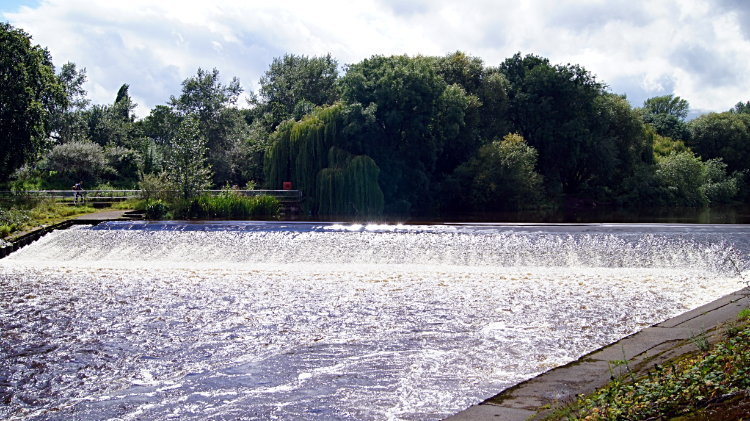 Weir in the River Severn at Shrewsbury 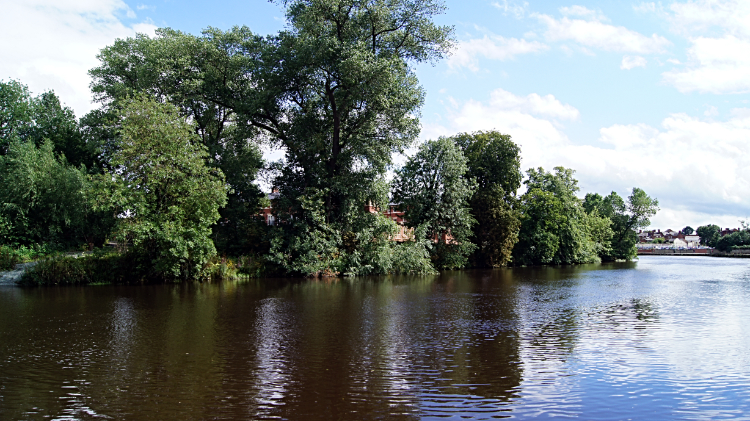 Day two of my Shropshire Way walk was coming to an end and a much better one than the first it was. Despite the dull weather of morning and early afternoon I had enjoyed much of it, particularly the crossing of Grinshill Hill with all its history and the sumptuous village of Grinshill. I recalled the fun of slipping and sliding on the cow pat concrete. Even moments like that linger with affection. The Dew Pond on Ebury Hill; that was lovely with the attention of the sheep too and though I draw a veil over the caravan site the beauty of the ruins of Haughmond Abbey compensated. The forest walk was a thrill too and now the bonus of a walk on a disused canal I never knew existed. And what a finale I had now being revealed. I have to admit I love the town of Shrewsbury. The old town is full of characterful buildings and is raised on a hill defended by an almost circular loop of the River Severn. And now I was approaching the old town by following the river as a finale to my day. The sun was out. It was beautiful. I finished my steps for the day with yet another smile and in the knowledge that I was most definitely enjoying my walk through Shropshire.