241 Shrewsbury
242 Telford, Ironbridge and The Wrekin 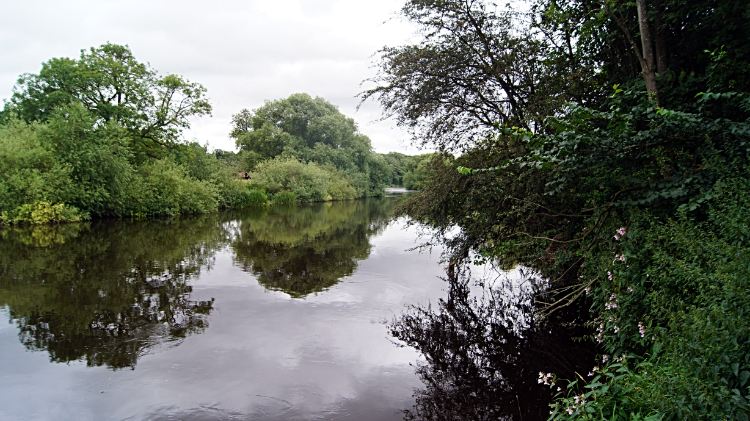 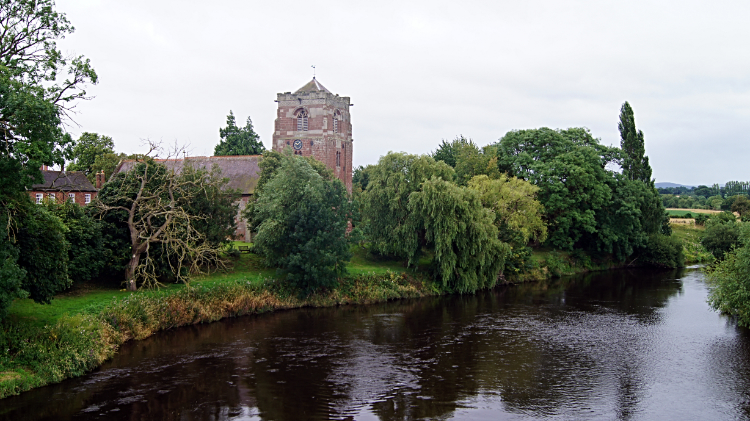 Day three of my walk through Shropshire was a diversion from the Shropshire Way and on to the Severn Way which I would follow all day. It promised great things but began incidentally by walking along the roads and streets west of Shrewsbury on the shortest course possible to reach the River Severn beyond Weir Hill Farm. The morning of the new day was dull and the first two miles of my new walk were drab. On reaching the river, while the weather stayed dank and with a hint of drizzle and rain in the air, my walk improved immensely. Britain's longest river is impressive in many parts and it was here on the three mile stretch I initially walked to Atcham. On the way I passed a big old tree, dead but skeletal with a pair of Cormorants sitting atop and looking down on me. They were most likely a breeding couple and one likely to fish the river once I had safely passed by. I noted they were becoming a common sight these days. I have seen them on the Wharfe, on the Swale and on the Lune and in my locality on the Nidd in recent years. I can not recall seeing them at all as a lad. Towards Atcham I also passed a few run down farms where nothing stirred this early in the day. It was around ten o'clock though and the only person i met on the way to Atcham was a fisherman, walking towards me in waist high wellingtons. "Going to the river?" I asked. "Aye, being gloomy this morning it is a good day for the fish" he replied. Continuing on in the overcast and the still I arrived in the village of Atcham. It is such a pretty place in its setting beside the Severn. Despite the traffic which hurtles along the B4380 and over Atcham Bridge. 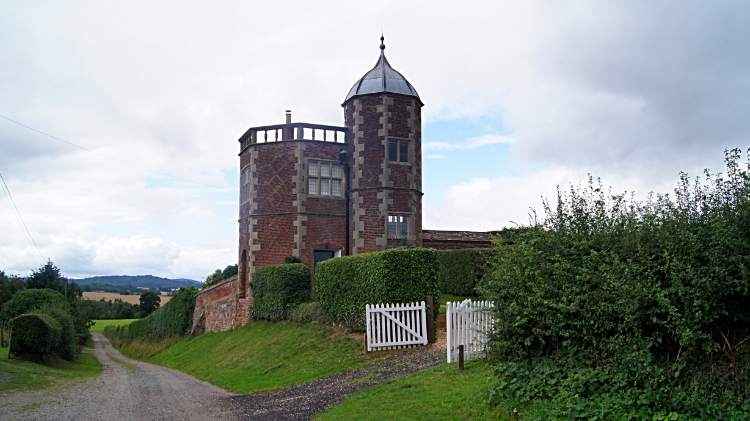 The Summer House, Eyton on Severn 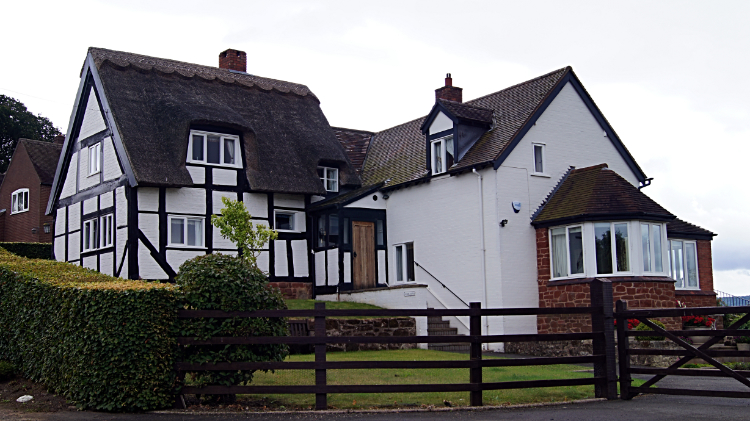 Grand House in Eyton on Severn

Next up on my Severn Way walk was passing the impressive grounds of Attingham Park, well worth a visit to see the country house and the parkland which has a resident semi-wild herd of Fallow Deer. The woodlands are very beautiful too. For another time though, now I left the noisy attention of the B road to follow a much quieter country lane to Wroxeter and to the site of the roman town of Viroconium Cornoviorum. Also worth a visit which, as with Attingham Park, I have in the past. For now though I continued on my Severn Way walk, striking on in improving weather conditions southwards to Eyton on Severn. Glimpses of sunshine peeked through an increasingly blue sky. It was a very enjoyable walk now. Along the almost car free country road I passed Halfway House standing on the crest of a small nameless hill and descended the road to the very picturesque octagonal towered Summer House where an elderly gentleman stood beside the road and greeted me. He talked of the history of the house, birth home of Edward Herbert, 1st Baron Herbert of Cherbury and one time holiday residence to notable guests in the past where a grander house also stood. Only the tower remains. Next I walked through Eyton on Severn, a very impressive village with grand homes, some mock Tudor. 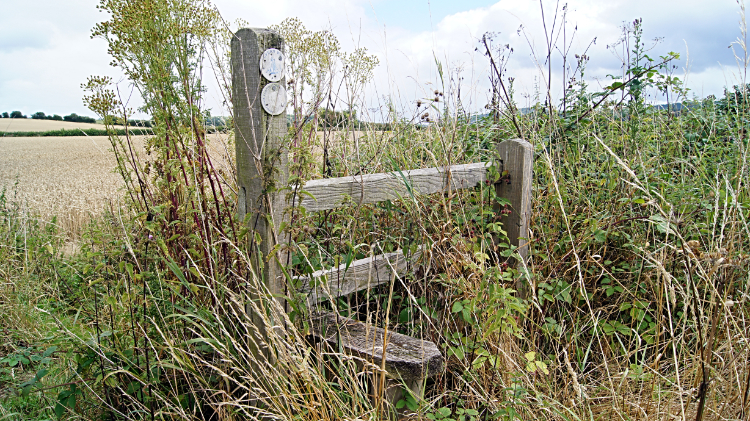 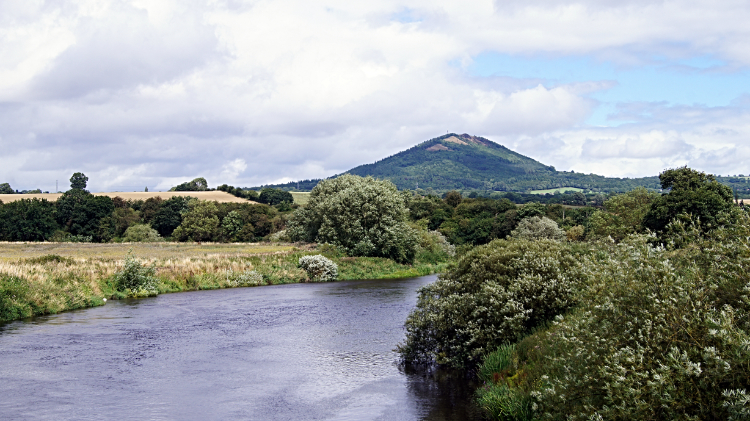 View to the Wrekin at Cressage Bridge

Next up I walked a bit more road to Lower Dryton and then a half mile of flat field with potatoes in flower before climbing a hillside to a copse and tangle of stock pens where I found a cosy nook and sat down for my lunch. It was one o'clock in the afternoon and I had walked ten miles. "Just seven to go then". I looked over my Explorer map while dining in my picnic spot and saw that the village of Cressage came next. A couple of unruly fields with unkempt stiles filled the way between me and the village and how I got through to Cressage Bridge without a scratch or a nettle sting was a surprise to me. At Cressage Bridge I stopped and I gawped. The view north-east along the line of the River Severn was amazing with the pyramidal frame of the south-west face of the Wrekin making for a sublime view. It is a cracker. What the view did not reveal though was the characterful length of the Wrekin and the Ercall hidden on the far side of the hill, a hill range of fascination I walked some years earlier. Reluctantly turning away from the view I left the bridge and walked through Cressage. It was very quiet. 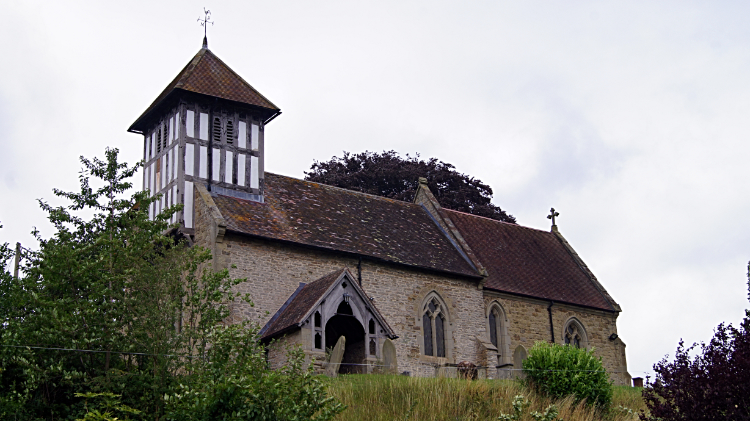 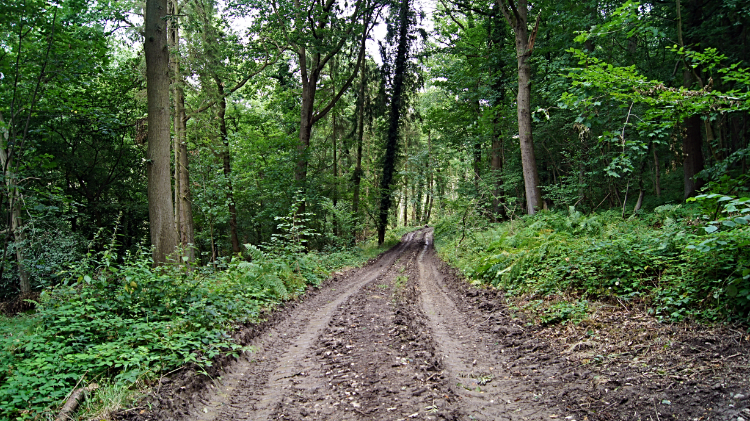 From Cressage the Severn Way led me along the tarmac of Sheinton Road to Sheinton where the highlight is the impressive medieval church of St Peter and Paul. A long timber latticed barn, a red telephone box and red post box of Queen Victoria also complimented the village which in Saxon means shena – tun, translating to "beautiful place". Leaving the village I continued on the course of the road and up the steepest hill of my Shropshire walk so far toward Buildwas Park. The climb of 50 meters ascent was short, steep and sweet. I arrived at Hilltop Farm knowing it. Then after gasping hand on knees for a minute I rose again and left the metalled road by walking into Piner's Coppice, my first stretch of woodland walking through Buildwas Park. Walking downhill through the wood I soon lost the 50 meters of height I had gained, reaching a section of the disused Severn Valley Railway which I followed the line of westwards to Park Farm and on further still to Mill Farm. Next in line was the site of the remains of a Cistercian Abbey. 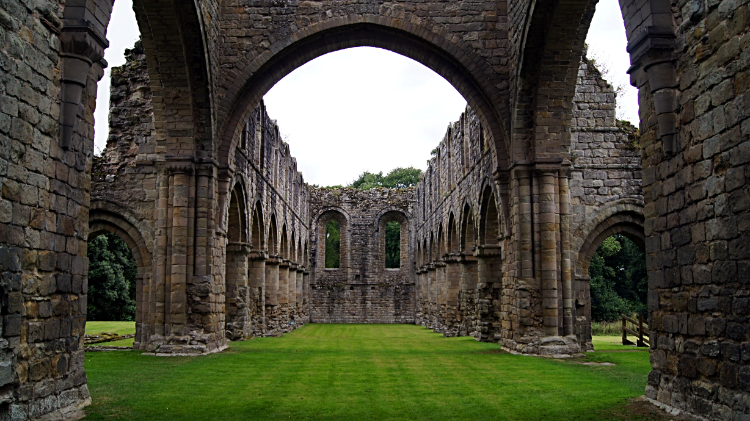 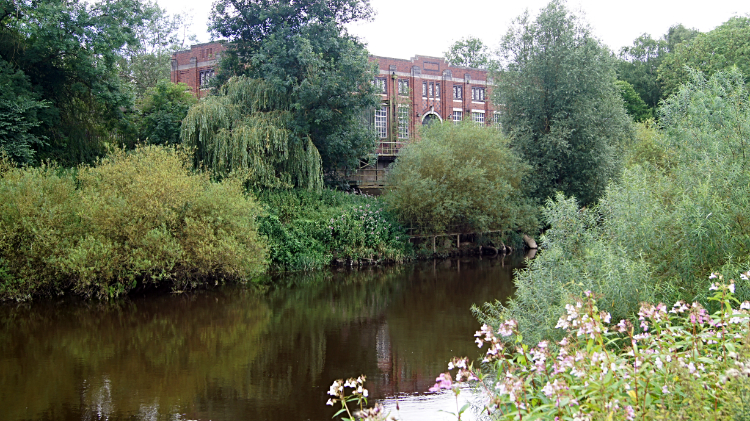 Buildwas Abbey was another impressive ruins to visit. I took an half hour from my walk to take a look around the site. Another of Henry's VIII's acts of vandalism has left the site a poignant and reflective place. Set in a peaceful spot beside the River Severn. Leaving the abbey behind I walked to another large site of abandonment. This time not the cause of fury by a King but by the cause of economics. The Ironbridge power stations simply aged and became too expensive to maintain. Once noise would have boomed out from the buildings. now just the twitter of birds and calls of other wildlife reclaiming the place. 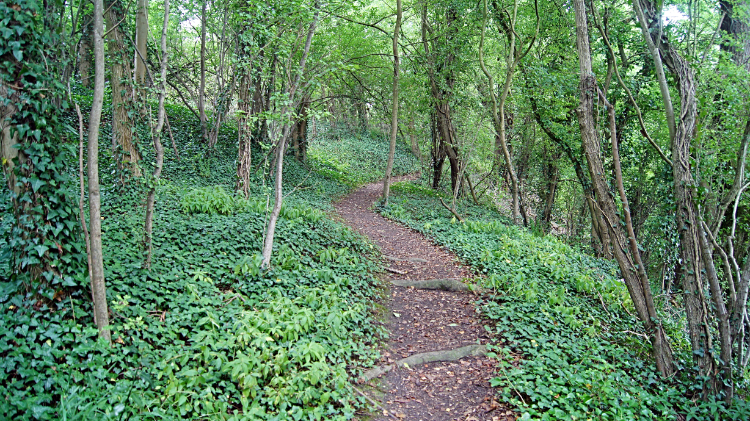 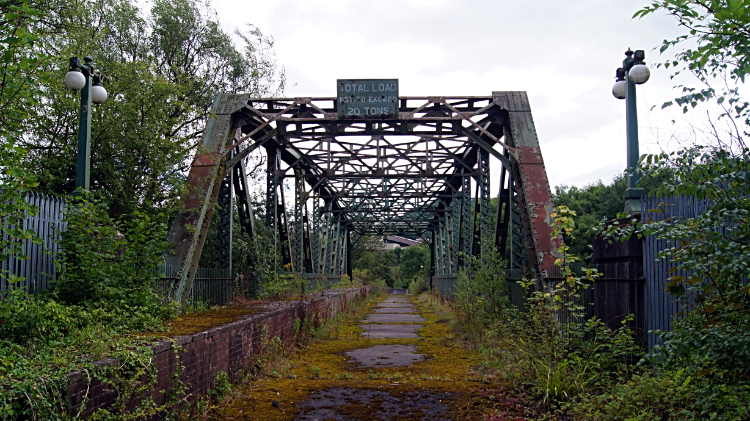 Continuing on from the site of the power station I found a lovely section of woodland on the north side of the river as it trundled through Ironbridge Gorge. The path snaked around the trees through the woodland. Never straight which was fun. At the far east side of the woodland I came back to roadside at a point where a sad and forlorn forsaken bridge, one serving the redundant power stations was nearby and rusting away. A sign on the bridge read "Total load. Not to exceed 20 tons". I guess it was a long time ago since a vehicle carrying anything near that weight crossed. A little further on my way towards Ironbridge I reached the Albert Edward Bridge which had once carried the engines and associated stock of the defunct Severn Valley railway line over the river at this point. 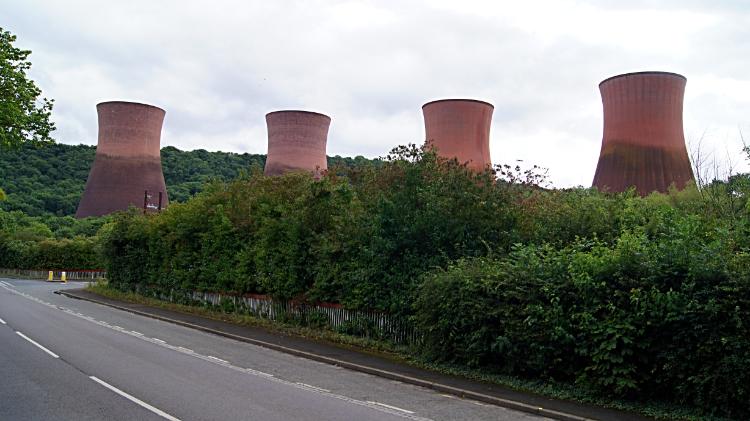 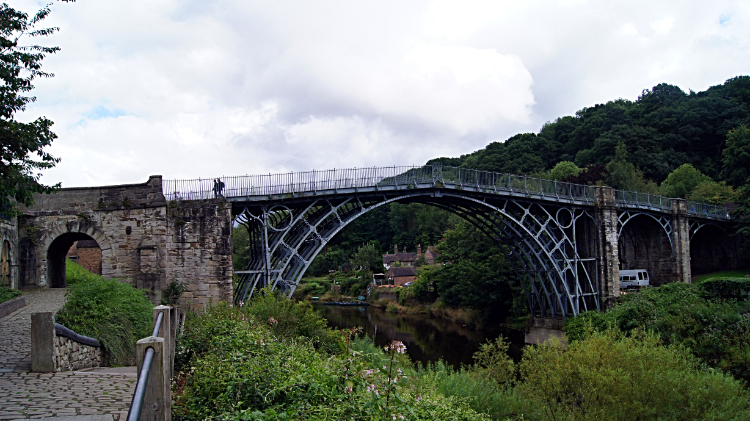 I came to a road sign welcoming me to Ironbridge World Heritage Site. Looking further on I noticed the four cooling towers of Ironbridge Power Station and wondered how long it will be before they are demolished. One day they will but not without a tear shed. Te towers are a local landmark and loved by many. Personally I like them. Carrying on to the finale of my walk I entered the town of Ironbridge and walked to the famous Iron Bridge. My walk for the day was done and what a finale. Standing beside the first Iron Bridge ever constructed brought back fond memories of my visits over twenty years earlier when my pal Joe and I used to stay with his sister and her husband in Coalbrookdale. I was glad to be back. Ironbridge Gorge is a wonderful place and an apt finish to my great day walking on the Severn Way. At Iron Bridge I also reacquainted myself with the Shropshire Way. That was for tomorrow.