8.30 am. We start by trekking through the village then a steep climb of around 400m to the Everest View Hotel. This spectacularly hotel was built by the Japanese with wonderful views of Everest and Ama Dablam and is an ideal place for a tea break. There is no view of Everest today as it was steeped in cloud and was keeping its majestic secrets a little while longer. The view down to Namche Bazaar from the summit ridge was breath taking with over four miles across the valley to the high mountain passes and the Yeti mountain home Kongde Hotel at 4250m high. This is one of the most expensive hotels in the region at a reported four hundred pounds per night. The Japanese stay there a lot arriving by helicopter then fly to Everest Base Camp then back in time for dinner, an overnight stay and flight back to Nepal in the morning. I don't know why I bothered with a nineteen day holiday, two days in and out and you've done it, easy. Lazy so and so's. 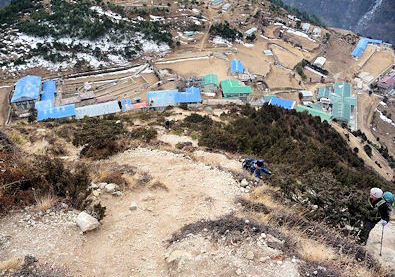 Steep climb out of Namche Bazaar 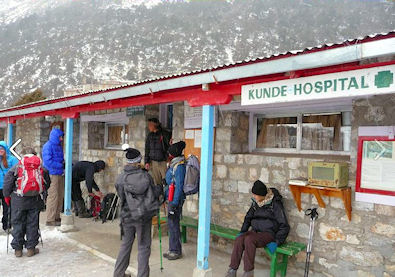 Lemon tea with honey of course (throat getting very sore now) at the Everest View Hotel then we trekked down to the villages of Kunde and Khumjung set below Khumbila, the rocky peak sacred to all Sherpa's. In Kunde we pass the Edmund Hillary School and onto the hospital which Hillary built in the sixties and both are going strong today heavily funded by the Canadian based trust that he founded.

We had a quick tour with one of the resident doctors which was fascinating but decided to push on in the snow that had fallen earlier down to the village of Kyangjuma for our overnight stay. The lodges had a bit less space than we had been used to. A communal toilet for all and the rooms were getting more basic, still the light worked (sometimes). Oh and the toilet did not flush, still that big blue bucket full of water is there for something. On the descent down from Kunde to Kyangjuma the mountains seemed really close and passing the spiritual mountain was really eerie but it was good to go downhill.

I said I would talk about Altitude sickness, Acute Mountain Sickness (AMS) to be precise strikes in many different ways and affects most people in some way. For example, at 5486m (18000ft) the air pressure is only 50 per cent that of sea-level. Each breath brings in half the amount of air, so you work twice as hard to bring in the required oxygen. The effects are felt by everybody regardless of age, fitness, gender or size. There are people that feel it straight away when landing at Lukla airport at 2840m usually they are light headed or have a slightly sickly feeling. The general rule whilst on this kind of trek is to "walk high sleep low". The ascents are purposely slow in order to keep the heart rate down and you walk higher than where you are sleeping for the night usually by at least 300ft or 400ft. This allows the body to adjust to higher altitude then when you descend your body seems to relax more allowing you to sleep. Also you need to drink plenty of water at least three to four litres per day to stop dehydration and no alcohol, save it for the partying on the way down. That's the theory and it's what should happen.

I should just say at this point that there is a drug called Diamox which combats AMS and will be taken by 14 out of the 16 of us at a later date and at higher altitude. You have guessed that I won't be taking it along with Dave as we have further plans in the Himalayas taking in more altitude than base camp but more of that later on. 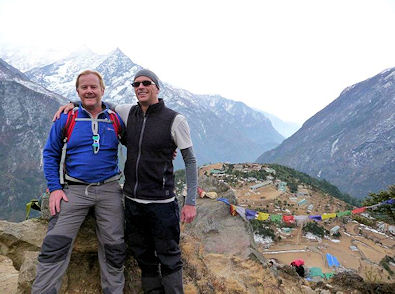 Me and David Pesco 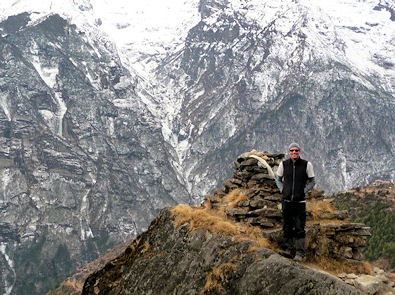 Most of us had an extremely dry throat because of the cold air and found it hard to sleep. Sleeping was not too bad on the whole for me apart from coughing my head for half an hour every night. My main problem was an extreme cold, constantly sapping my strength nicknamed "the Kumbu cough", a bleeding runny nose and the driest throat ever. I was not on my own many if not all suffered from dry throats and a lot had the bleeding nose, it's just the cold doing its worst and is the effects of AMS.

We are now five days or so away from base camp and the group is little apprehensive because the weather needs to buck up and you find yourself questioning whether or not you will make it. We have just been talking with another group who are on the way down and staying in the same lodges as we are and they did not see a thing at base camp above 4000m. The cloud was too low.

With everything I have been talking about over the last few paragraphs you must be wondering "why I should go". Don't let me persuade you not to go, most of the time the views are probably the best in the world for mountain people. Even when there was cloud around we had blue sky from time to time. Today we were all hoping for a glimpse of Ama Dablam and Everest in the distance but this was not to be. Pasang our guide is sure the weather will break and the wind is getting up slightly and I have to agree. The best is yet to come.

Dinner was good, egg and chips with tomato sauce, I know it sounds a bit sparse but sometimes the simple things taste best. I just wanted something from home. Oh, still can't kick the cold but then I guess I am in a place where that is mighty difficult. Down to about 75% strength now, I hope I can sleep.