7.00am. It was another early start this morning. Five thirty after a night full of weirdness really, what with Nepali men dancing together and seemingly asking the men from our trip to dance rather than the women. Strange. Good night all the same.

We had a short walk to the airport at the end of town for one of the earliest flights of the morning. After watching three flights leave it was our turn to be loaded onto the Twin Otter plane. Once we had all sat down and the luggage had been loaded into the plane there seem to be commotion with the pilot, Persang and the tower. Well I say tower it was a man on the ground outside the plane. You are overloaded and will crash he seemed to be saying. So our trusted leader offered to get off. In the end three large kit bags were taken off (about 45kg) and we were OK. OK that's only half a man's weight surely not enough if we are so called overloaded.

The engines roared at the top of the runway and with the brakes released we are slingshot down like an overloaded locomotive. Nearing the end of the runway I hear those reassuring words from our leader, "Get off the flipping ground", or words very similar. It is then that I learn to my amusement that Pasang is not a good flyer. We sprang off the runway like a leaping gazelle and clear from the mountains edge. The forty minute flight seemed forever with severe loss of altitude followed by screams several times. The thermals are strong on these mountains. Once we are clear of the Himalayan large mountains the flight was fine with a textbook landing.

The pilots that fly this route are some of the best in the world and have to spend over five years as co-pilot before they can take the controls themselves.

We arrived back at the hotel soon enough and to the height of luxury. I had another shower (wow two in as many days) and then most of us strolled down town to do a bit of shopping. Chris, David and I went to a real coffee house which was really good, just chilling out sipping coffee with nothing really to do at all. There are many great shops in the main town but the Disciples book shop is a store not to miss with many books being reprinted here. This shop must have the largest collection of mountain books I have ever seen. I bought "Man of Everest" by Tenzing, his autobiography. Well it had to be done and it is a great book.

That night we had our farewell meal at an Indian restaurant and the food was really good (no salad this time) and tomorrow we would all go our separate ways. Sometimes things end all to soon! 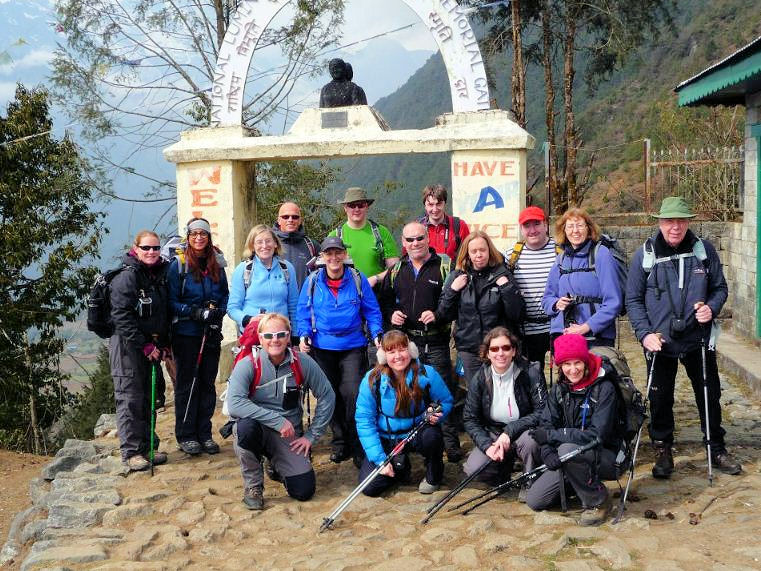 Me and new friends at the Gate of Lukla

I understand now why Sir Edmund Hillary was infatuated with the Himalayas and spent much of his life there before and after he and Tenzing summited Chomolungma (Everest) in 1953. Hillary became a founding member of the Order of New Zealand. Hillary and Tenzing are also nationally recognized in Nepal, where annual ceremonies in schools and offices celebrate their accomplishment. It is truly amazing what Hillary has achieved in these mountains with the building of schools, hospitals and Hotels. He quite literally is a God in this region.

If this is a holiday you have wanted to do, then do it. You will not be disappointed in any way. It was truly magnificent and made all the better with fifteen wonderful people: Lads-David, Chris, Ivan, Stu, Chris and Martin. Ladies- Katy, Joanne, Karen, Debs, Becs, Kath, Mary, Nita and Cath.

I would walk anywhere with these people!