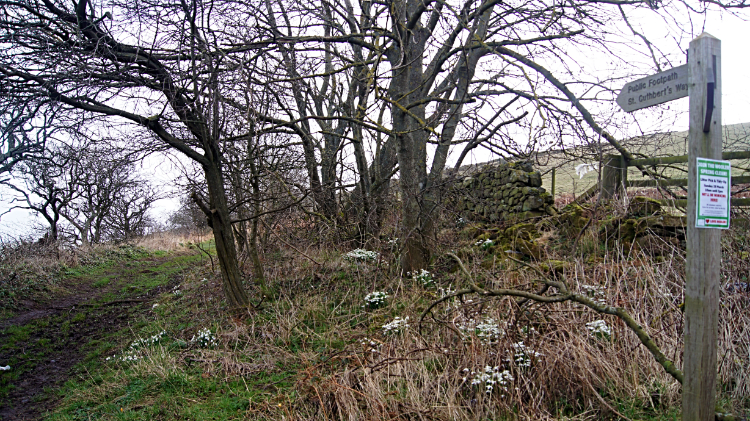 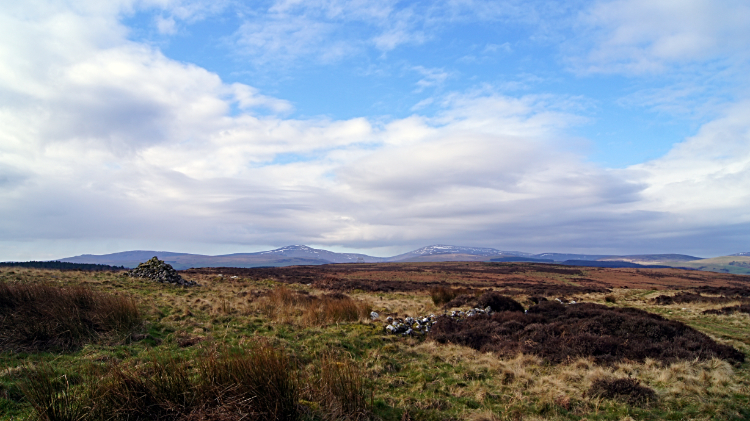 Sunday morning, 9.00am and I set off from a very quiet Wooler on the last stage of my St Cuthbert's Way walk, hoping to end the journey on Lindisfarne/ Holy Island some time in the afternoon. As I walked through Wooler I passed St Marks Church at the same time the vicar was arriving to set up for Sunday Service. We gave each other a wave as I walked on by. Next I paused at Tower Hill, once the site of a fortified tower and now the site of Wooler War Memorial. On I went, crossing Wooler Water by the B6348 road bridge, walking along Weetwood Avenue and then on to my first climb of the day by following Brewery Road to Weetwood Moor. the climb of 100 and a bit meters from Wooler to the moor top, first by tarmac road and then by a snicket path brushed off any lingering lethargy I may have had from the morning. By the time I reached Weetwood moor I was full of life and enjoying two lovely revelations. First the early morning cloud was breaking up and the sun was coming out. I had not seen it while crossing the Cheviot Hills over the previous two days but now it showed, just in time for my finale. The second revelation was the beautiful singing up on the moor. Skylarks were in full voice. It was heartwarming to see them rise and sing their little voices out. A real joy of spring and on this Sunday morning in mid March the full Skylark orchestra was out. On the moor, while enjoying birdsong I sought out a couple of sights I had wanted to see. The moor is famous for cup and ring marked stones. I think I found the Neolithic/ Bronze Age markings of Gorsebush Rock. Well, the one I found was within a Gorse bush. On the moor I also enjoyed great views back to the Cheviot Hills, their summits still spattered with winter snow. 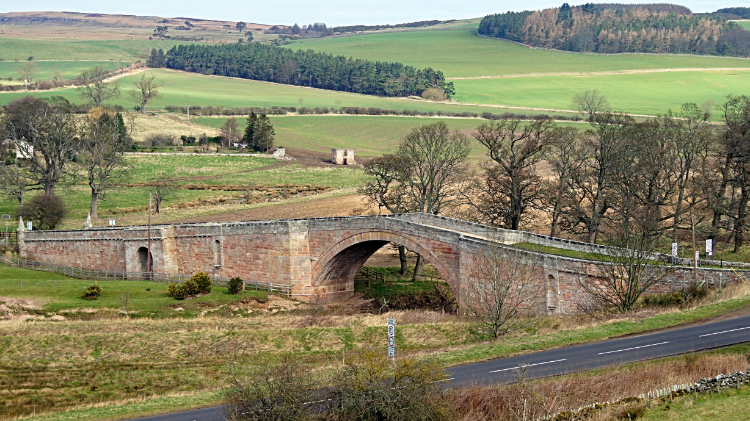 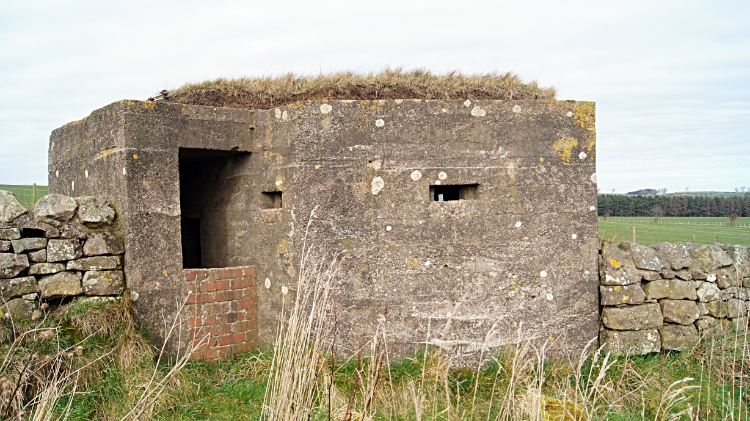 From Weetwood Moor which i had crossed in an easterly direction I turned north and headed down to Weetwood Bridge. On the descent I was watched attentively by a deer. Of course, it ran off when I peered at it a little too closely. When down from the moor on Weetwood Bridge I paused for a few minutes, dropping my rucksack and sitting on the low wall of the bridge. Chilled out I watched the River Till flow on its gentle way towards its terminus at the River Tweed. All the watercourses, streams, becks and rivers I had crossed over the last couple of days were bound for the mighty Tweed, Northumberland's premier river which I had left just before halfway of day one of this journey. From Weetwood Bridge I put the rucksack back on and hardened my resolve for the hardest part of my day and possibly the hardest part of my St Cuthbert's Day walk. Some may think crossing the Cheviot Hills should be the hardest challenge but not for me. No, it was now. I had four and a half miles of tarmac road and hard compact stone lane to follow now. I set off, pacing away on the tarmac. High hedgerows kept my attention on the road as I could not see much besides. I trudged on to reach West Horton and immediately after East Horton where I rested on a wall. The heat was starting to get to my feet. I needed to cool them. As well as walking on tarmac I had also been climbing since crossing the River Till and on my resumption of walking I climbed again towards a high point at Mealkail Knowe. Between Horton and Mealkail Knowe the road had turned from tarmac to unmade road and just after that I had crossed the Devil's Causeway Roman Road which I guess Roman soldiers did not enjoy walking along. After crossing the Roman Road I reached Mealkail Knowe to find not a Roman Mile Fort but instead a World War Two Pill Box. Part of an extensive network of British Anti-Invasion defences built between 1940 and 1945, this pill box must have been a remote posting. Especially as it was not used in any engagements. It was well sighted though, on top of a 115 meter high hill with a fantastic long distance view over two miles eastward which is very likely the way an invasion would come. I took a look inside the pill box and I was happy to find Swifts had found use of it, nest sites being in several places. 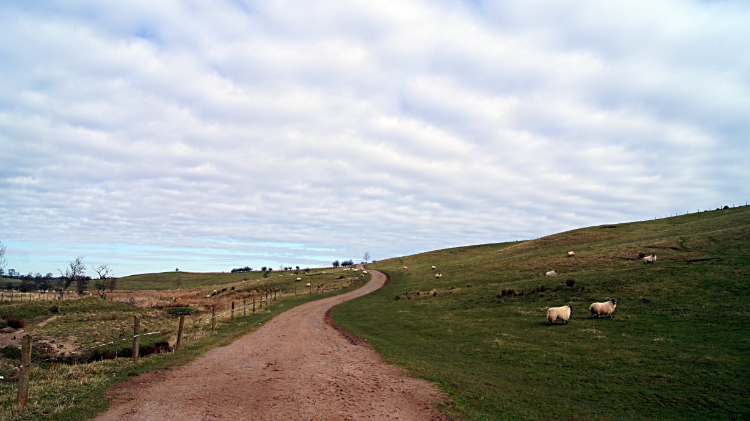 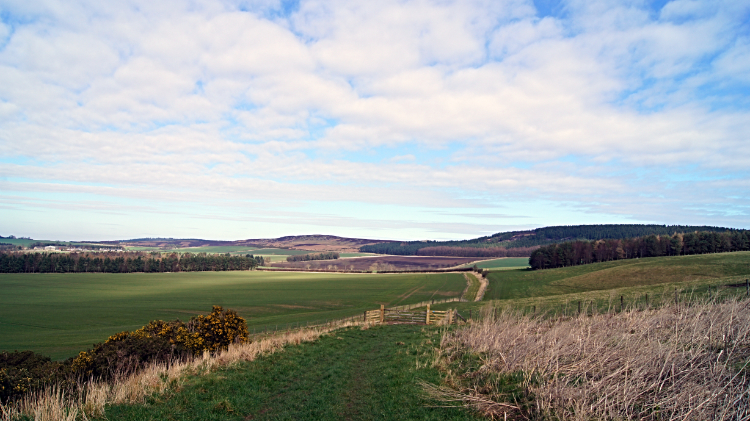 Descending from Mealkail Knowe to Hetton Burn at around 45 meters altitude was a brief respite from the pounding my feet were taking on the hard track and any chance of walking on softer grass verge was readily taken. After crossing Hetton Burn I began climbing again, first to a couple of cottages which heralded my unfortunate resumption of unforgiving tarmac walking and then phew, a half mile later to unmade path. "At last" I thought but I was also feeling my feet a little now. I had an ache on one instep and with avoiding undue pressure on the ache I could feel a small limp coming on. The damage had been done. It was not too bad as long as I walked slowly and kept to softer ground but it was in my head. Fortunately I had reached softer ground and I continued walking gingerly on fields edges to North Hazelrigg and on towards a very special place on the walk which I had been anticipating since stepping out of Melrose on the beginning of my St Cuthbert's Way walk. 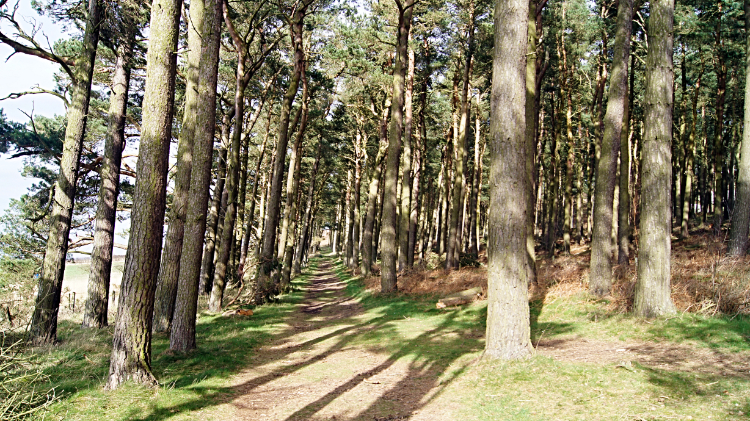 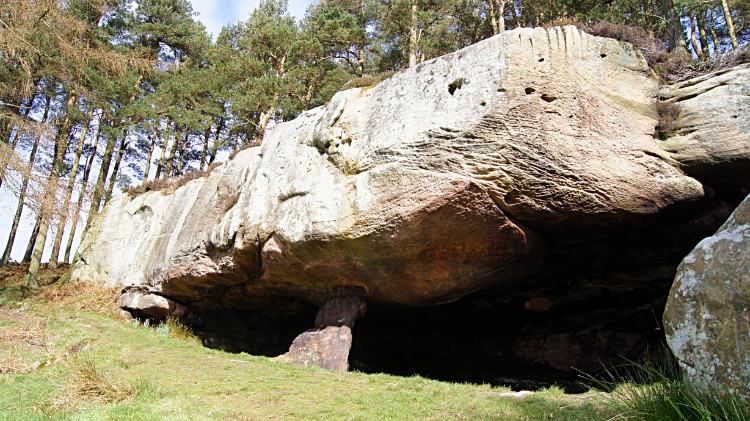 From the fields I reached Girneynick Plantation and at the same time, for the first time on this stage, I came across fellow walkers. It was Sunday afternoon now, approaching 1.00pm and I was in a very popular walking area with a central attraction. I was arriving at the site of St Cuthbert's Cave. Well, the Holburn one anyway. I never knew there were two St Cuthbert's Caves until now. This one I knew from an episode of Vera where a body was found. The only bodies today were fit and well, about a dozen or so admiring the site as much as I was. I had dropped my rucksack to the ground which my feet appreciated to explore the site, a lovely place of large sandstone outcrops in a woodland dell. Being around lunchtime I took a break at the site, completely immersed in the surroundings and enjoying the warm sunshine which is always seized upon in early springtime. Thoughts of a good summer and lots of walks... what could be better. 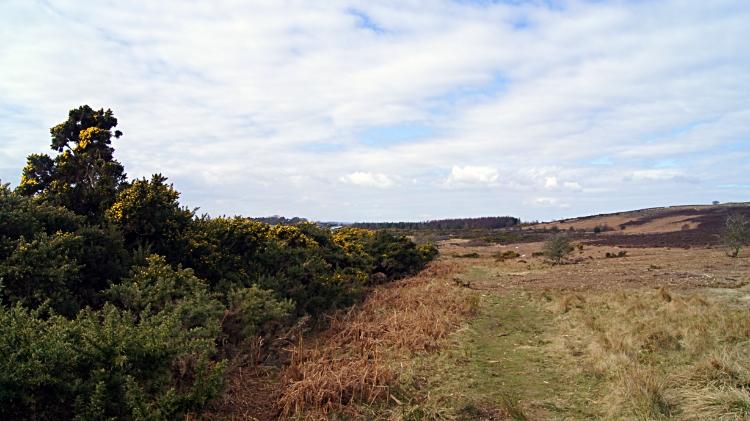 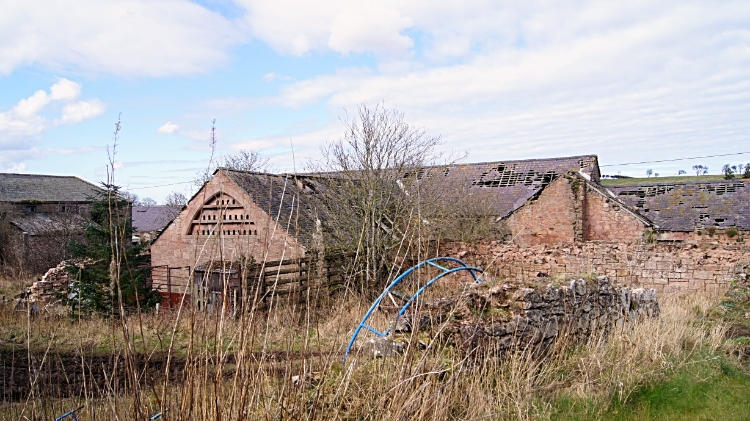 After my time spent at St Cuthbert's Cave which involved half an hour of resting I set out on the final stage of my St Cuthbert's Way walk, over Buckton Moor to the village of Fenwick and on to the coast. Much of my way over the moor was on one of those non too thrilling walks through a conifer plantation. The official St Cuthbert's Way guide gives the description "following an enjoyable track through Shiellow Wood towards the village of Fenwick". Sorry, I disagree. Still, when out of the plantation at Blawearie and at the point I joined with St Oswald's Way I was entertained with a clear view across Fenwick to the causeway and to Lindisfarne. My end was in sight. I walked down the tarmac road into the tiny village of Fenwick. My limp was not getting worse so the tarmac did not bother me too much now, I was set on the exciting finish. The hurdle of crossing the A1 was no problem either, the road is dead straight and with plenty of vision to traffic in both directions I ambled across. It was not busy. Then I continued on tarmac past the dilapidation of Fenwick Granary with its collapsing roofs and to a springy walk on the Fishers Back Road track. I arrived at the Swab on the edge of the North Sea. Straight across Holy Island Sands was my goal. 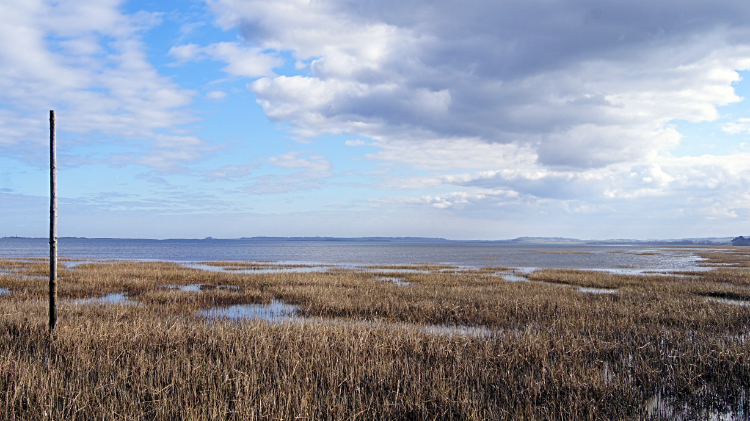 View to Bamburgh from Lindisfarne Causeway 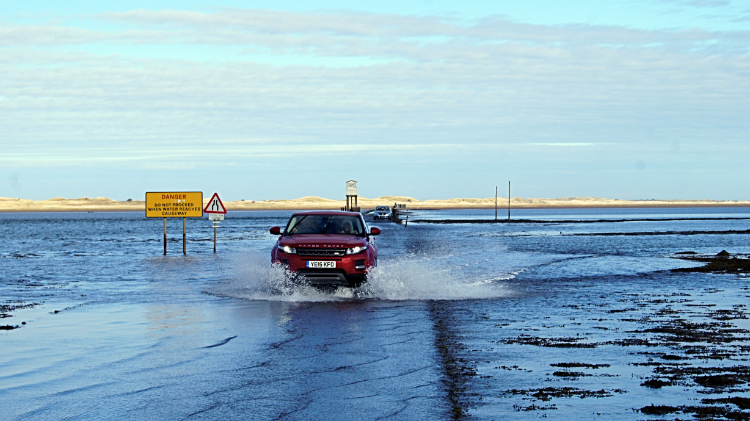 I walked from the Swab to the car parking area on Lindisfarne Causeway and looked out for a lady waving at me. I soon spotted her. There was my lovely wife Lil waiting to take me home. Not yet though, I still had a walk on the causeway to the Holy Island of Lindisfarne. And I had to wait. The tide was still up and though it was on the ebb the road was still under water. Mot that it mattered to a few motorists in bigger 4x4 vehicles with higher wheel bases. They made the run and they made it across. But was not getting my feet too wet at this stage so I waited it out. We watched the water ebb away from the Refuge hut on the causeway and when it was low enough to paddle through I went on my way. To Lindisfarne. Lil headed back to the car. She would meet me on the far side of the causeway. 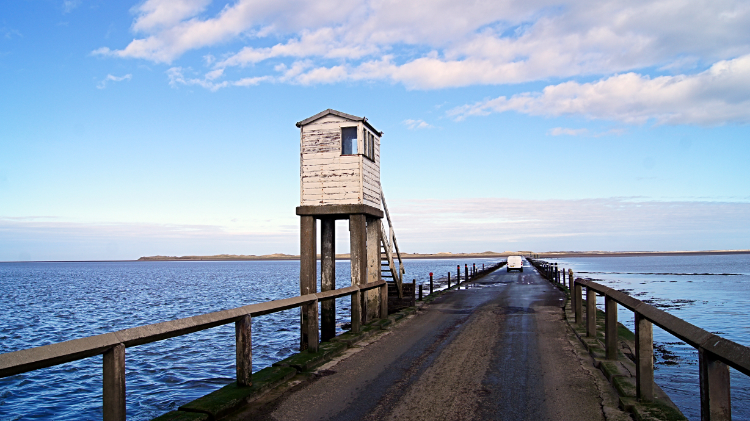 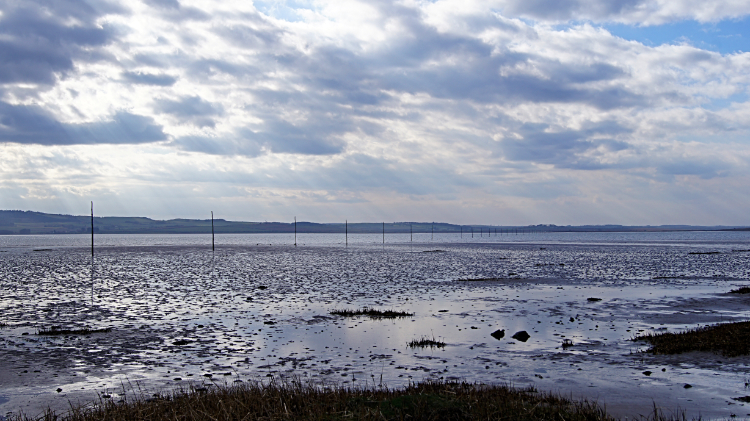 The Pilgrim's Path to Lindisfarne

I began my walk on the causeway road, a three mile walk. Often I was required to stop as two way traffic, now on the move, made their respective journeys too and from the island. As I walked across I looked to my right and to the line of erect posts in the sand which mark the line of 'The Pilgrim's Path'. I had held romantic notions to take off my boots and socks, roll up my trousers, and walk it to the island. But it was still under water as I crossed and I had waited long enough for the hard causeway to become walkable. On my entire three mile walk across I kept on looking to the line of poles and nobody went anywhere near. Eventually, a little over one hour after setting off from the far side of the causeway I arrived on Lindisfarne/ Holy Island. 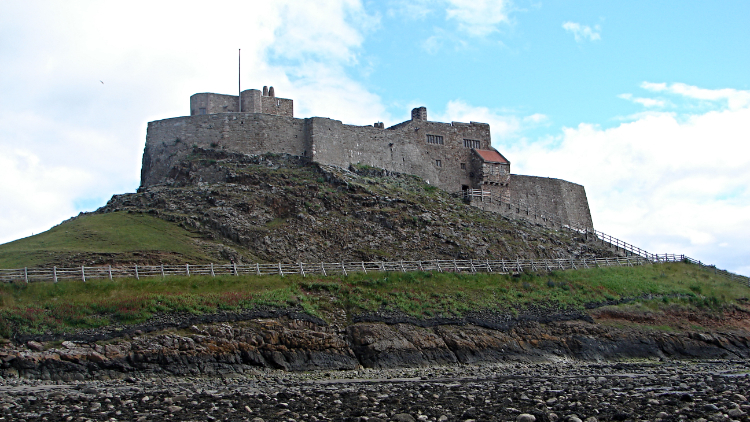 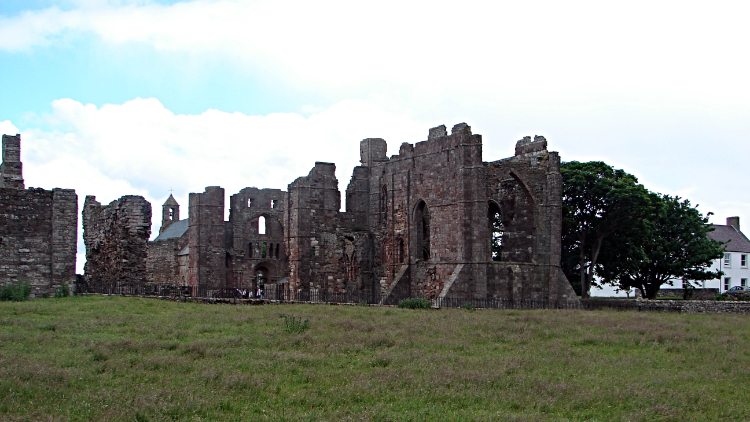 Though the official end of the walk is at St Cuthbert's statue at Lindisfarne Abbey I first went somewhere else. For a look around Lindisfarne Castle which dominates the skyline on the island. (Oh, I forgot the mention. Walking was much easier now and the limp practically gone. How? Because my rucksack was in the car. Much easier walking without it). From the castle I wandered across the shingle of the Ouse to Lindisfarne Abbey where I sought out St Cuthbert. I am not a religious person but I admire a traveller and I payed him the respect of a visit to his shrine to end my lovely four day journey of St Cuthbert's Way. That's it, I am done now. Thank you for joining me on the walk.