The Walk: From my morning Facebook post, 19th March 2016: Good morning from Town Yetholm. As I enjoyed breakfast at the Plough Inn I looked out of the breakfast room window at morning activities in the village. While one of a couple of Jackdaws picked a good haul of straw for the nest it's partner nonchalantly crossed the road to look for titbits by the pub frontage. The village shop was a hive of activity with constant comings and goings including local farmers and out of village people driving in for the morning papers and provisions while the villagers ambled to the shop. Most were solo and walking the dog to the shop. Some met for chats. No haste here, nice and easy. Always friendly. Today I leave Town Yetholm and walk to Kirk Yetholm before climbing the Pennine Way for its first half mile before heading east to Hethpool and on to Wooler. Bye for now, I am now going through the backpack filling routine before the off. 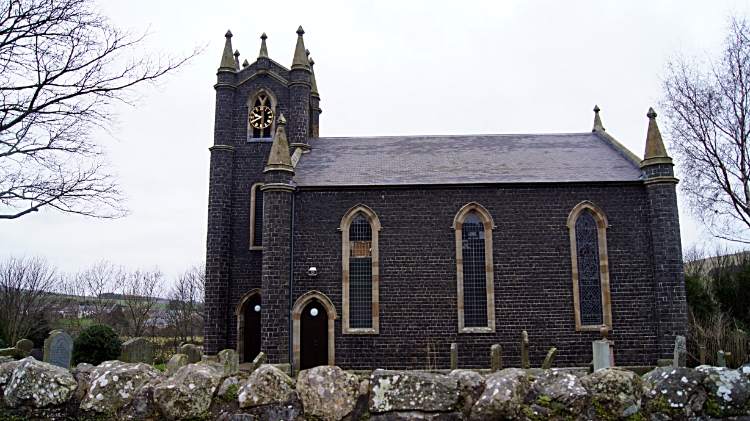 The Kirk of Yetholm 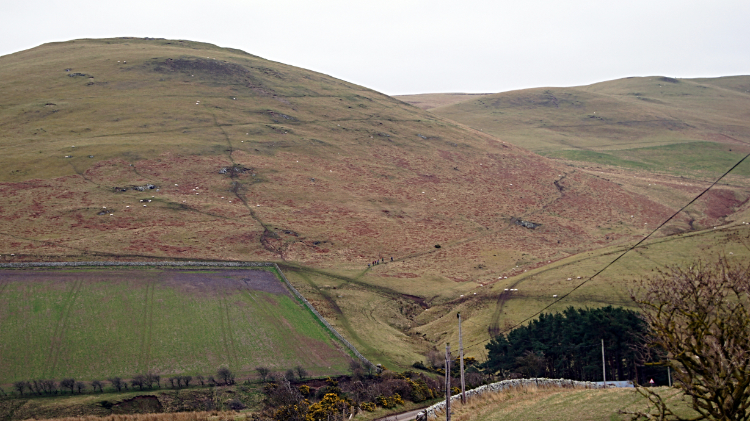 As I left the Plough Inn four people were boarding the number 81 bus service to Kelso. A road sign at a road junction in the village informed me they had seven miles to travel by road. It also pointed out that Wooler, my destination today was thirteen miles away by road. My more scenic route over the northern edge of the Cheviot Hills was just a little bit further. I looked forward to my route today as I walked from Town Yetholm to Kirk Yetholm as this third day of four on my St Cuthbert's Day walk was the one when I would spend the majority of my time in the hills. Walking down the road I passed the Kirk of Yetholm before entering the village of Kirk Yetholm, most famous as being the starting/ finishing point of the Pennine Way, Britain's first National Trail. Walking from the village I passed the Border Hotel, end of the Pennine Way. Or start if one choses to walk it southwards. So after passing the Border Hotel I was following the Pennine Way too. I have walked much of its 268 miles, practically all of its route through Yorkshire and much of its southern end in Derbyshire but this was the first time I had walked along it in Northumberland. Quite novel, I may actually walk it all in one go one day. For now I followed it by road on its shared bit of route with St Cuthbert's Way to where the road ended at Halter Burn and on unmade path to Green Humbleton. On the south-east side of the hill the paths parted ways. I continued climbing on a course eastward into the Cheviots while the Pennine way headed south. 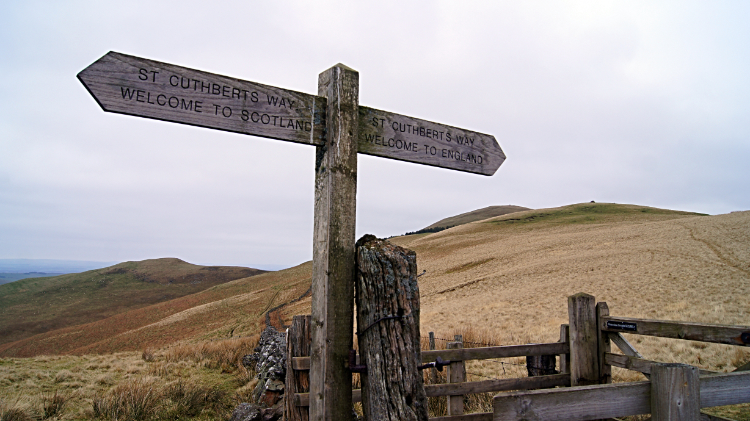 Stepping from Scotland into England 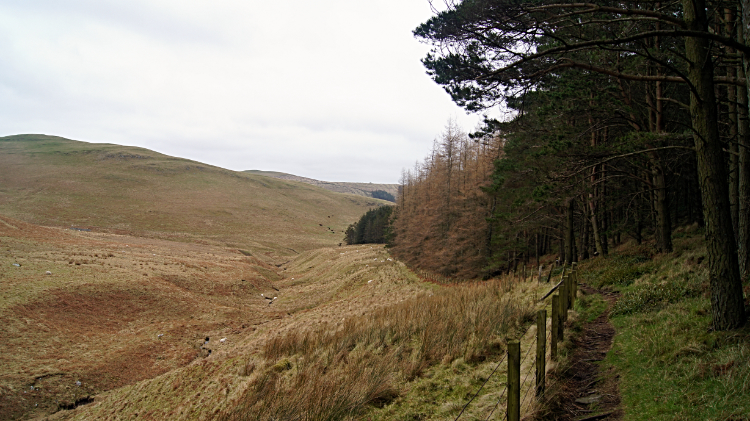 I continued climbing into the hills, following a group of around six people I could see as Lowry figures a few hundred meters ahead of me. As we climbed towards Stob Stones I closed in on them and while I got to within 100 meters but we did not meet. They tracked off St Cuthbert's Way after Stob Stones, heading south towards White Law while I continued climbing east towards Eccles Cairn. Just before I got there, around 30 meters from the 350 meter summit I crossed from Scotland into England. A signpost showed me the border line. So far on my journey I had been in Scotland. For the remainder of my journey I would be walking further into England. At Eccles Cairn the huffing and puffing of my early morning climb came to an end. Since crossing Halter Burn a mile back I had climbed 230 meters into the Cheviot Hills. The next three miles I could enjoy on a gentle descent to the College Valley. 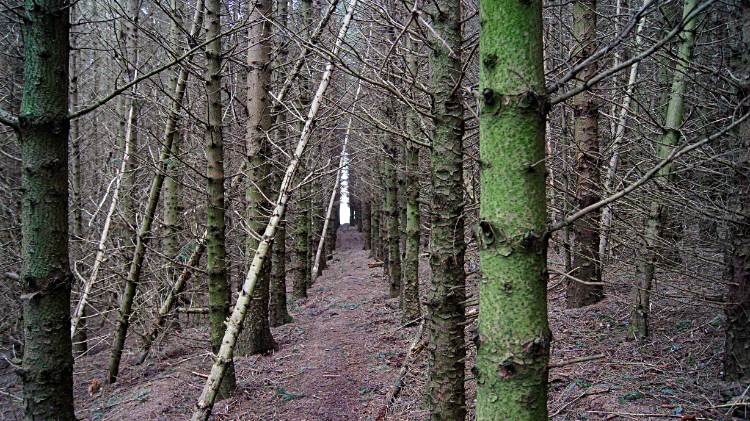 Threading through the trees 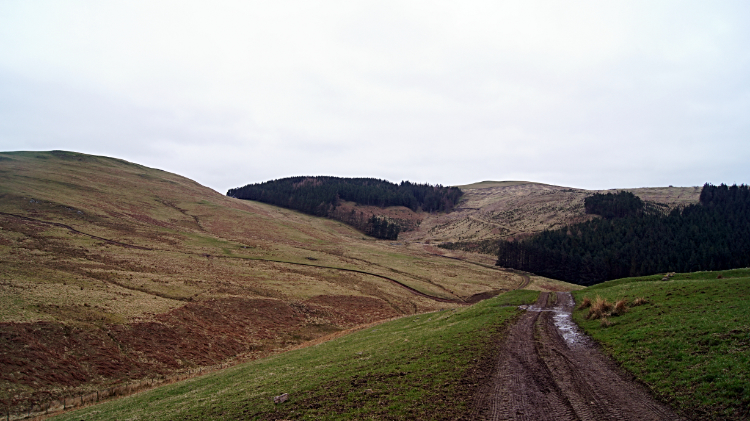 After continuing on a good track, albeit a little squelchy, on the south slope of Coldsmouth Hill I reached a plantation near Scaldhill Shank. It was another of those formal fast growing coniferous trees arranged in dead straight lines and closely packed together to maximise the timber yield. The floor of the plantation was a thick carpet of shed pine needles, easy enough to walk through but so thick that nothing else could grow its way through the droppings. Apart from the trees the rest of the plantation was dead. I was glad to get to the other side of the plantation and out into open ground again. The path continued across a field, stocked with sheep who paid me little attention as I crossed. After the field a farm track led me down past a farm and into the valley of Elsdon Burn. Walking along the valley I looked to the hills on my left and right, making a point of seeking out Great Hetha which had featured in a guest post by Colin Corlett on my website some years ago. I was glad to spot it for myself. Colin had also photographed the College Valley and Yeavering Bell to which I was heading. On a much clearer day that today. 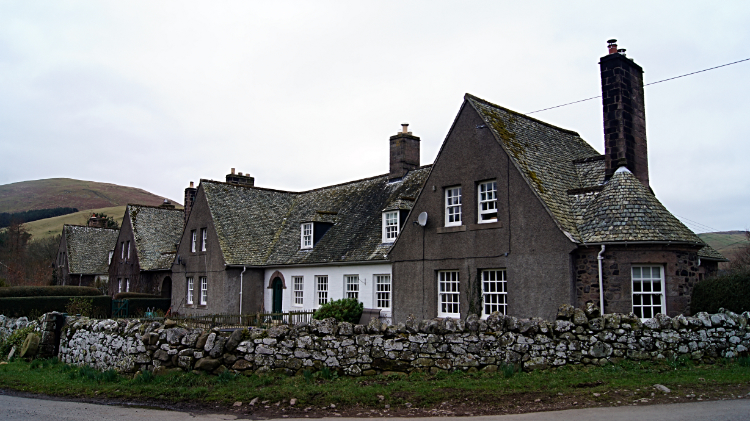 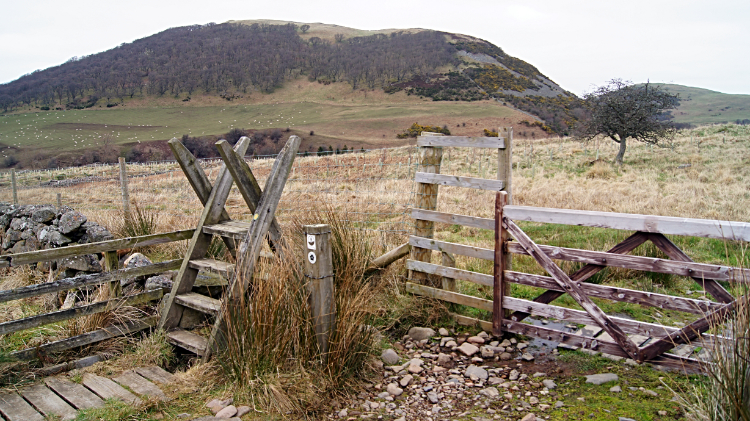 I reached the small community of Hethpool, no more than one stately building, namely Hethpool House and a row of estate workers cottages. Nevertheless, some people were walking around Hethpool, the only ones I had seen since seeing that walking group on the Pennine Way. From Hethpool I followed College Burn east to Hethpool Linn, a small waterfall. Here I was following the route of another of Colin's walks, this one to Newton Tors which stood above the valley to my right. Colin had cut from the valley to climb to Easter Tor whereas I kept going a little further to leave the valley after Torleehouse, taking the col pass between Newton Tors and Yeavering Bell. 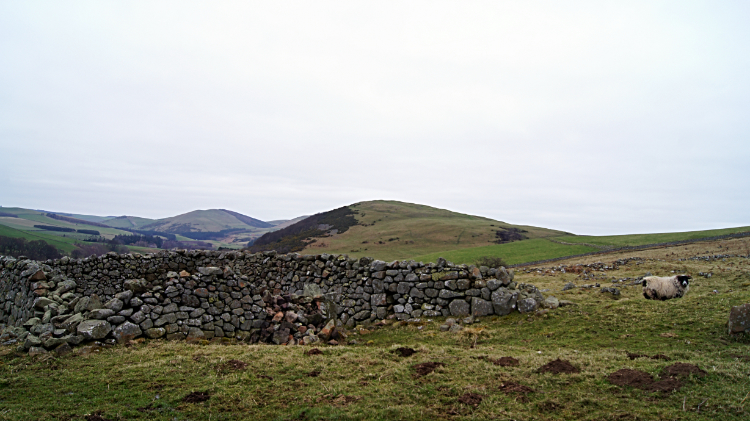 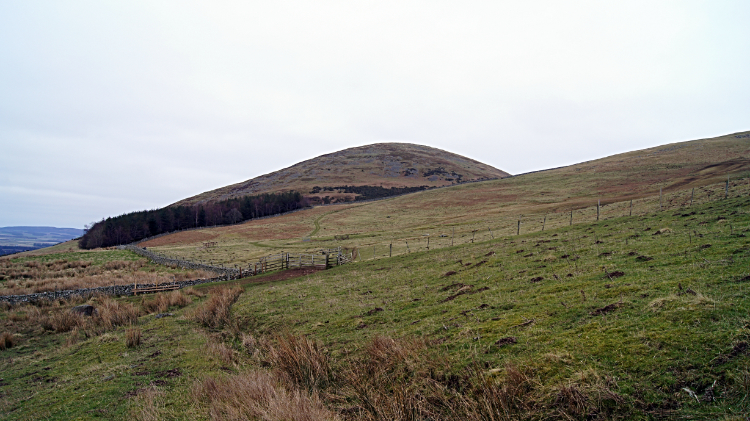 The country seemed wild around here. well it did as I walked through on a cool mid-March day of cloud. The sheep I passed on the open fells appeared a more rugged type, all scraggy and unshorn. However they had a certain character about them, an attitude even. They certainly were not bothered about me walking past them. They just watched on as I went on my way. Even in the security of the valley and in the sheltered lees trees struggled to take a hold. There were a few straggly Hawthorn making a stand but not much else. Apart from Gorse which had early season yellow blossom. That too was also confined to cover near Hethpool Linn though. Proper wild country walking. I loved it. Gaining height I made my way up the col between Newton Tors and Yeavering Bell, on the way making a 200 meter altitude gain which topped out near Tom Tallon's Crag. 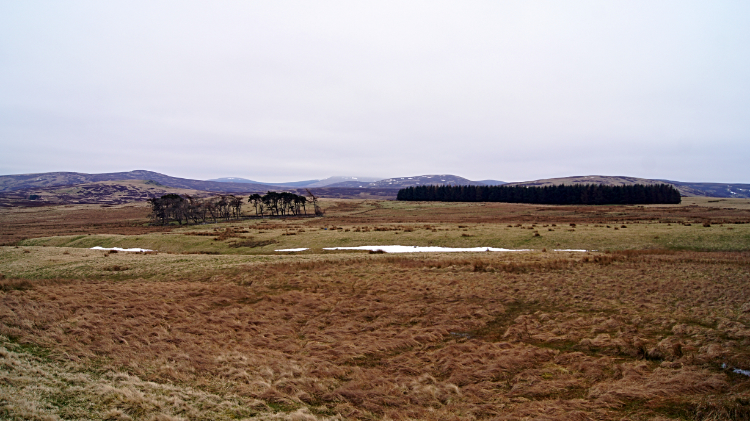 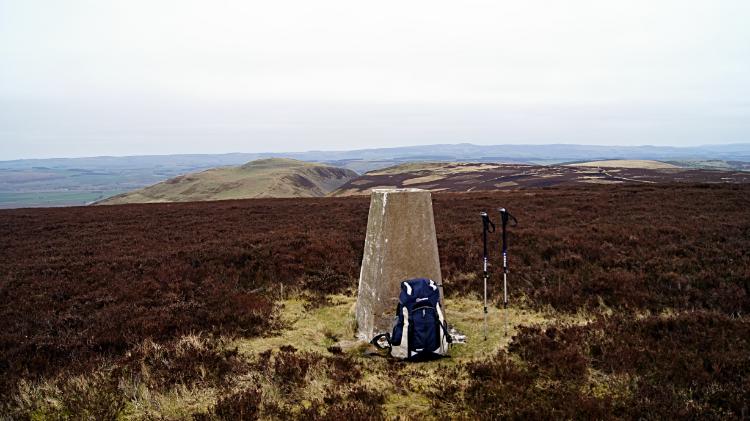 The walking from Tom Tallon's Crag to Black Law, on a level of just over 300 meters was often soggy, a peat land with soaks and pools constantly interrupting the path. The type which halts a walks progress while one works the best way around the wet area without sinking in. I could see a group of four walkers across the way from me dodging similar obstacles on a path heading towards Scaldhill and Commonburn House to my right. The going improved for me when I made the turn from heading south-east to north-east on a line towards Black Law and Gains Law. Wide access tracks across heather moor made it easier going. I thought "Probably a Grouse shooting hill". At Gains Law I rested by the trig pillar, 391 meters. It was 4.00pm, five and a half hours into my walking day and all that remained now was a descent from the Cheviot Hills into Wooler. Albeit a three mile long descent. Soon after leaving the tops I spotted dog walkers and I followed them all the way to my accommodating town. First off fell and then off high pasture to woodland. More plantation woodland first, nothing fancy. Lower down though I let the dog walkers go on their way while I lingered in Wooler Common and Woodland Park. Native trees, ponds, flowering areas, lovely. I spent some time in the park, part of it spent shepherding a toad from the access road to cover near one of the ponds. Soon after I walked into Wooler and found my accommodation. A second enjoyable day walking across the wild Cheviot Hills was now done and just one day of my St Cuthbert's Path walk remained. To Lindisfarne.

From my post walk Facebook Post, 19th March 2016: Three stages done and one to go on St Cuthbert's Way. I would call today's walk the 'Moors Stage' as it was predominantly moorland trekking all the way. From Kirk Yetholm I followed the Pennine Way to one mile from White Law before leaving it to head east. Soon I crossed the border near Coldsmouth Hill and continued east across Northumberland to Elsdonburn and then along the upland valley to Hethpool while enjoying great views of Great Hetha and Newton Tors. From Hethpool I climbed to high ground once more and crossed Grouse inhabited moorland on a line over the 300m level. The cackle of the Grouse kept me company for the next few hours as I passed Yeavering Bell, Tom Tallon's Crag and Black Law before leaving the path to cross unpathed heather Moor to the trig pillar on Gains Law. Snow patches were still in evidence on the north facing slopes of the hills to the south and they will not have diminished today. It was cold up there and the sun never showed all day. Some short sections of the moorland paths were boggy but generally the paths were very good to follow. From Gains Law trig pillar I trekked to Currick Hill and then walked down into Wooler. A good walk done in an area new to me and thoroughly enjoyed. Especially as there was little road to follow, only the first mile from the start out of Kirk Yetholm. Looking forward to more wide open spaces of Northumberland tomorrow followed by the final paddle in the North Sea to Lindisfarne.