Stage 3: Heddon On The Wall to Chollerford

Summary: The third stage finally led us into open country. From Heddon the feel of the walk changed completely with city, semi-urban and lowland rural giving way to wide open countryside. This stage also saw us walk to places identifiable with the Roman occupation, albeit starting less than dramatic with mounds of earth and ditches without stone but by the end of the day we had seen our first piece of old Roman wall. And even without Roman influence the scenery was dramatic.

The Walk: A third morning of dry weather in a row welcomed us as we stepped out of our Wylam accommodation and headed out into the fresh air, a remarkable occurrence in the summer of 2012. Taking advantage of the blessed break from rain we caught the next available bus from Wylam to Heddon on the Wall and prepared for the off. 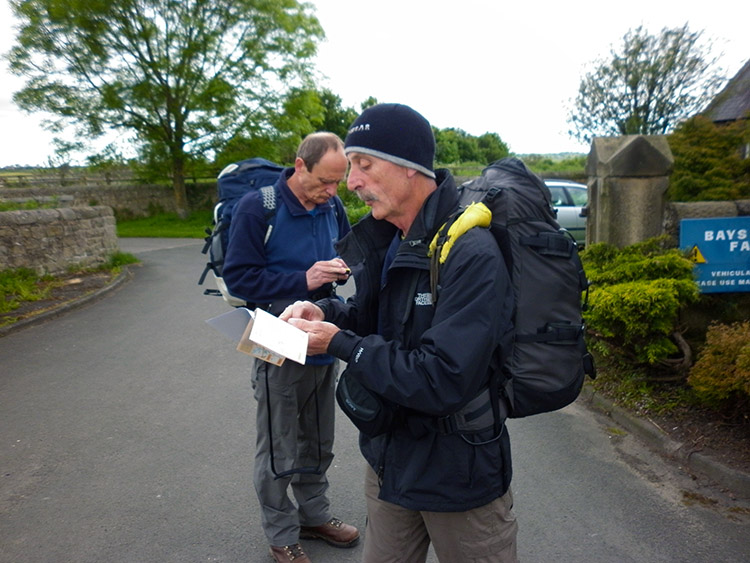 Double checking the route from Heddon on the Wall 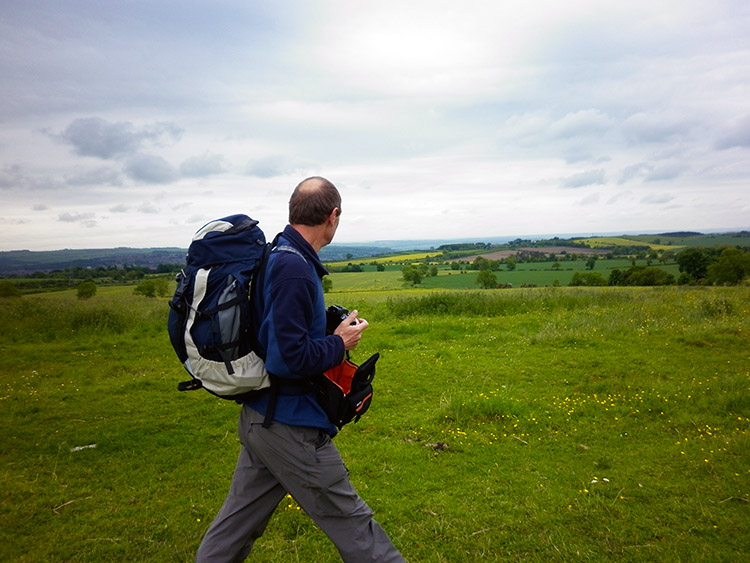 Preparing for the off can sometimes be the hardest navigation problem of a whole days walking. I have often struggled to get out of urban situations, many streets being the same. On one eventful occasion I recall Steve and I taking a few wrong directions in Buxton to do a walk to Chrome Hill before chancing on the right one. Somewhat embarrassing that day but this time we had no problem, particularly as Heddon on the Wall is a small place and we had the advantage of local knowledge by walking into the village yesterday. Thus after Steve had completed checking his map and I had orientated my GPS we set off in the right direction and followed the obvious road on a course west out of the village. The first mile was dead easy anyway, taking us along the B6318 and over a bridge which crossed the A69 before we left the roadside and into a field towards Rudchester Farm. Once away from the road the first real feeling of being in the wilds were provided by the excellent panoramic views of the Northumberland countryside to the west. It was the first real taste of wilderness walking we had experienced so far and I really looked forward to the rest of the day. I wondered "Would we finally see the wall today?" 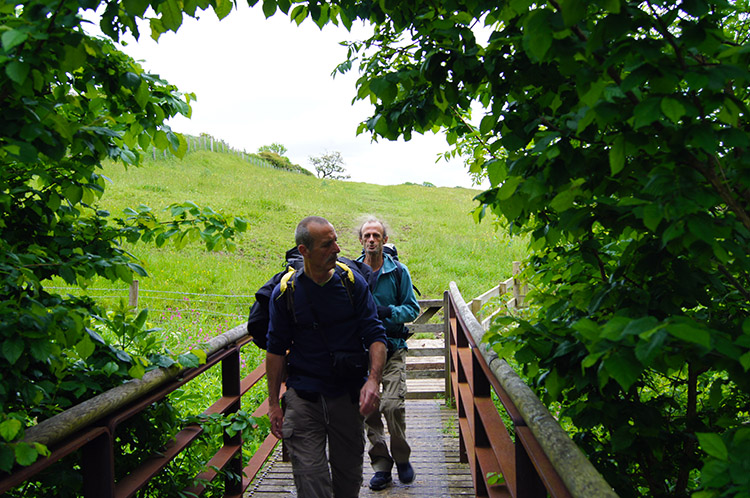 Crossing a footbridge near Rudchester Farm 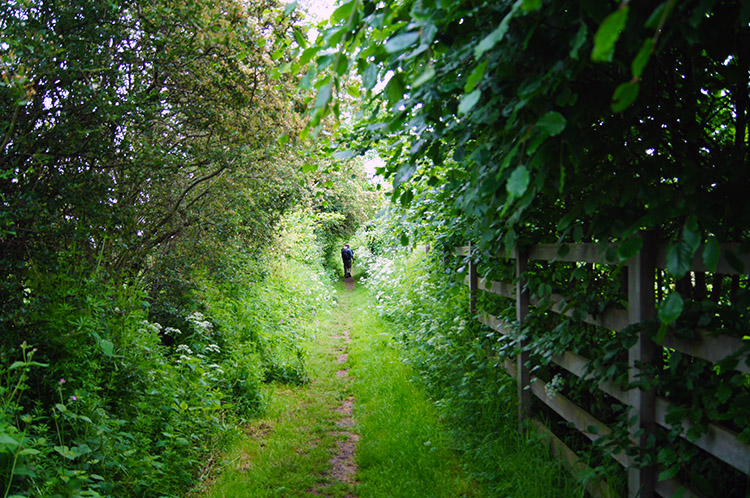 After Rudchester Farm we crossed a road and reached a sign indicating we were entering the site of Vindobala. Excited at the prospect of our first fort inspection the reality was a disappointment. We could not find any real evidence of where it once stood, earthworks being expected but none to be seen. The site had been levelled over years of agricultural activity, or so it seemed to us despite excavation works of the Time Team type finding Roman relics in 1924 and 1962. While the inspection we undertook on the site was less fruitful that that of the experts we remained hopeful for better examples to follow. In that hope we strode on, continuing to enjoy the fine countryside around us. 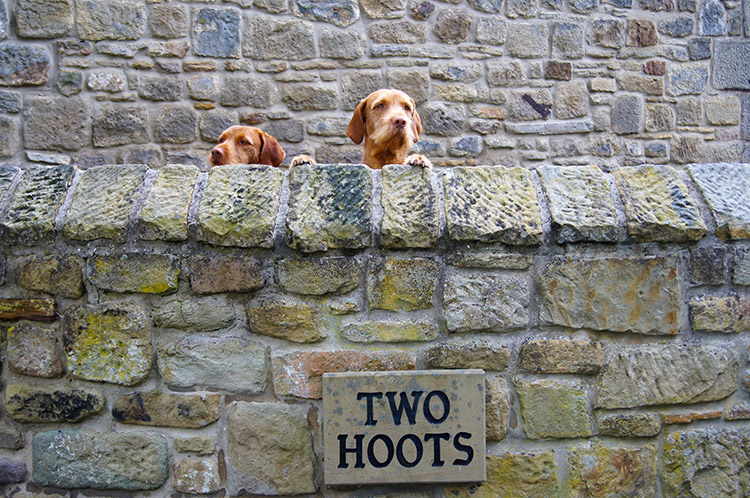 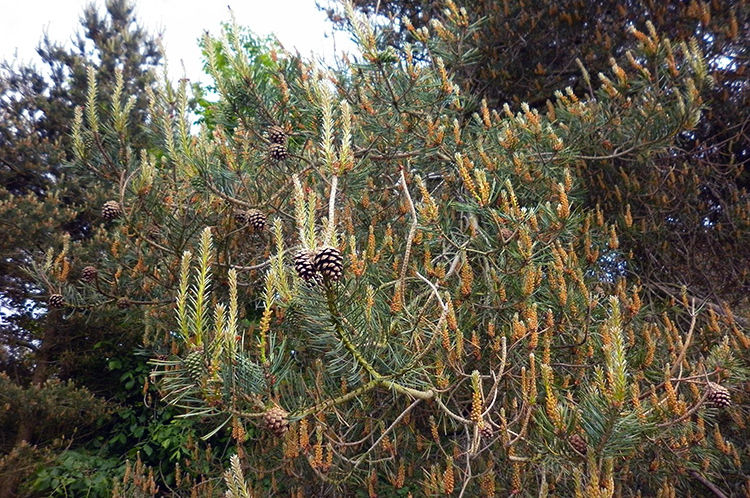 Our next point of interest came after a couple of more fields and a short section of road which took us to Two Hoots and an amusing encounter with two fine and friendly dogs which stood tall on their hind legs to watch us pass with interesting expressions. They left a lasting impression as I am sure they do with many Hadrian's Wall walkers. From Two Hoots aka Iron Sign and High Seat we walked on in a straight line along a field side beside the B6318 for almost two miles to the hamlet of Harlow Hill. We were hoping for a cafe or small shop in the hamlet to take a brief break but there was no life in sight as we walked over the hill bearing the hamlets name so we continued on and crested the hill to look out on more miles of straight road ahead of us. Also ahead was Whittle Dene Reservoir which doubles as a nature reserve. We would stop there. 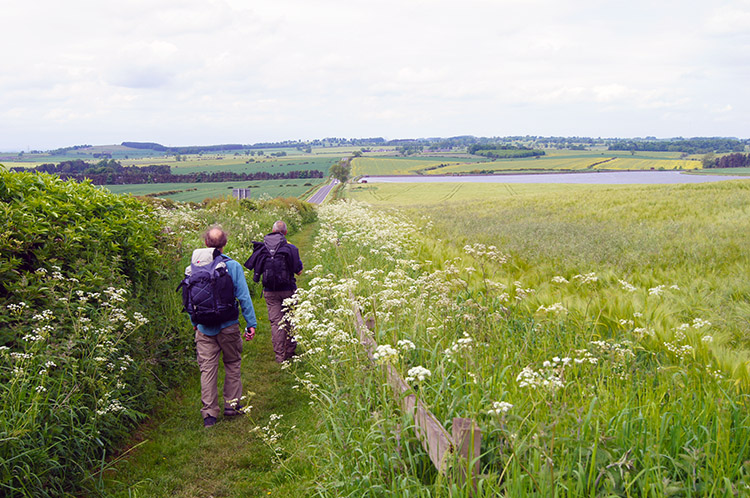 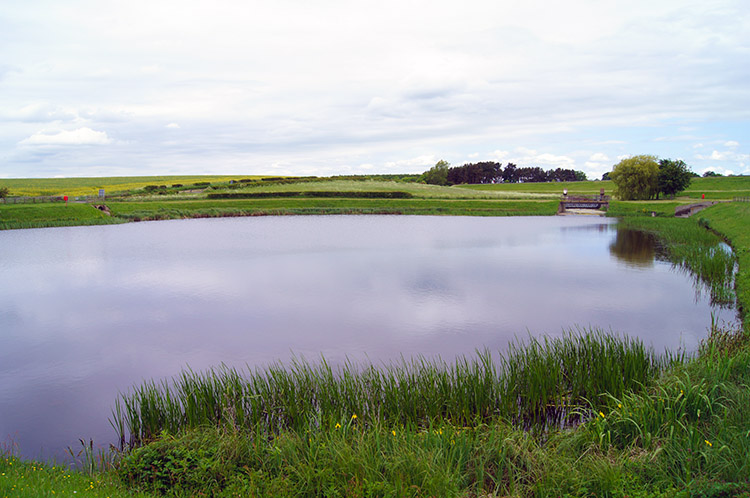 Thus we strode out to Whittle Dene, no hot drinks break being available we would have to avail of our provisions and hopefully take a provided hot cuppa later in the day. After bearing down the long slight descent to the reservoir we were relieved to find benches provided for bird-watchers and Hadrian's Wall walkers alike. While chatting, drinking and taking a bite to eat we watched a nesting Grebe on the reservoir and a couple of courting Swans close by. It was an enjoyable if brief encounter with nature, all without any break to the birds calm as they will be used to people stopping at the site on a very regular basis and watching over their daily activities. It was all so natural as it should be. 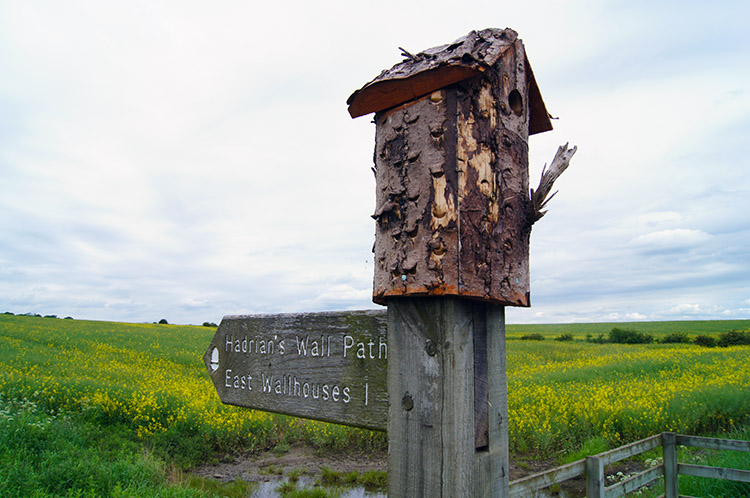 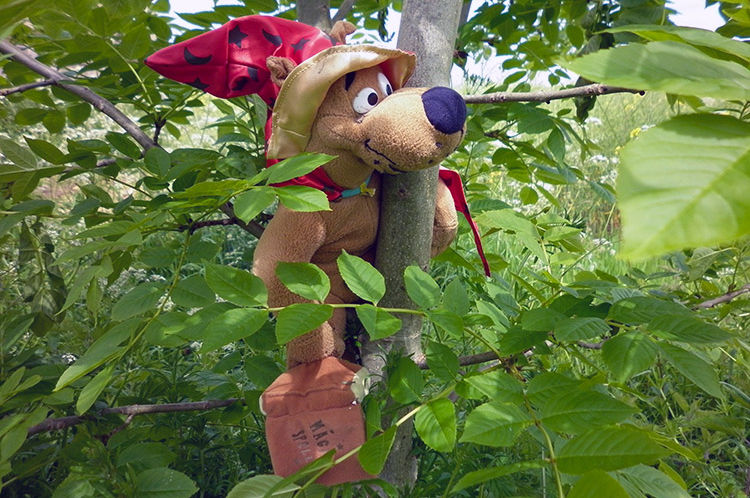 Strange characters were lurking in the bushes

After our rest in the haven of Dene Reservoir Nature Reserve we continued on by steadily climbing to East Wallhouses where we came across strange animals lurking in the bushes. All were smiling cuddly types, some obviously found and others a little harder to spot. How many can you find? After our amusing encounter with the wildlife we continued to Wall Houses on a line parallel to the quiet road. At Wall Houses we briefly left the parallel line to skirt around the farm buildings and while doing so had a second amusing close encounter, this time with a flock of sheep assembled in a paddock beside the farm. What next? 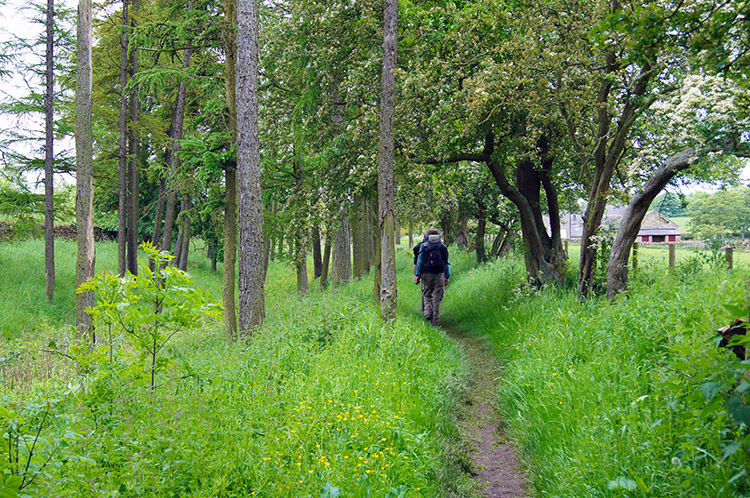 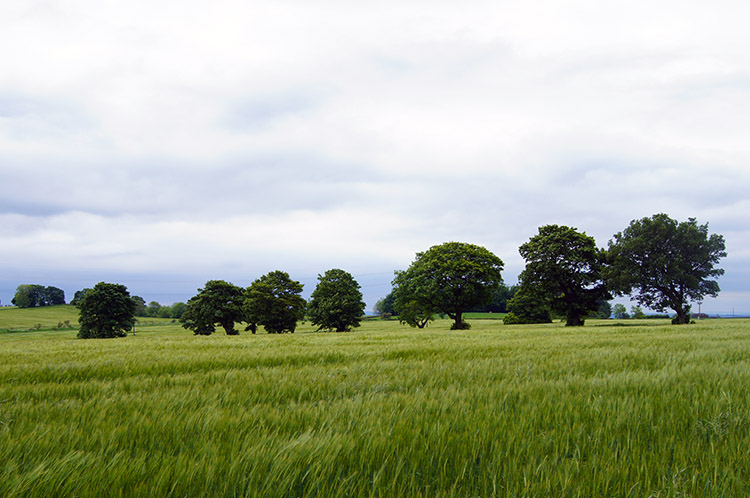 This scene of trees and crops caught my eye

After passing the farm buildings at Wall Houses we continued on our way through a small woodland copse to Piers Gate and Matfen Piers where Steve and I sat for a while watching an Owl hovering over a wheat field in a hunt for prey. The Owl stooped and rose several times before moving off by which time Dave had caught up with us after stopping in the copse to rearrange his rucksack and footwear. We then continued on from Piers Gate by crossing the road from the north side to south side to Halton Shields before crossing the road again and then after Halton Shields and Carr Hill we crossed the road again. Good job it was not busy with traffic. 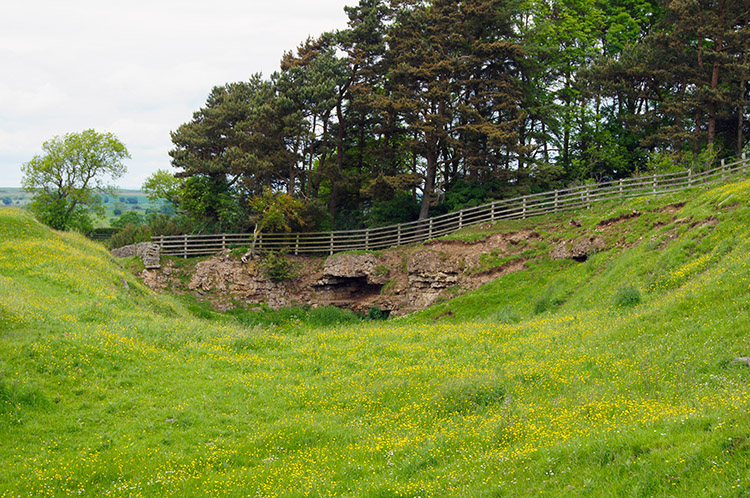 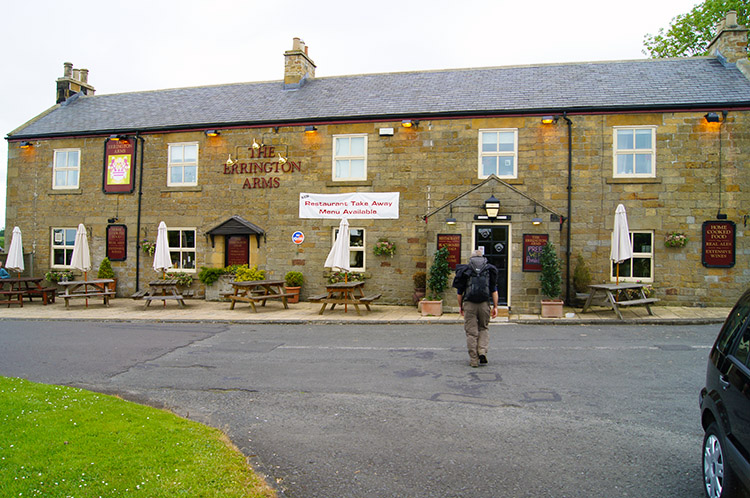 Steve heads for refreshments at the Errington Arms

From Carr Hill we left our course which had been in shelter of road and close to a hedge line to skirt round the south side of Downhill Quarry. The disused quarry sits on the spot where Milecastle 21 of Hadrian's Wall should have been. Archaeologists ascertain Milecastle 21 was totally obliterated by the siting of the quarry. I could have guessed that, but it is equally possible local folks have pillaged the earth and stoneworks of Milecastle 21 as the have completely obliterated the previous 21 miles of the wall. A thought crossed my mind - how many miles will we travel before we find the wall proper? Banking that though we walked on from the quarry to the site of Onnvm Roman Fort, now the site of an entrance road to the remains of Halton Castle which is now a private residence. It's possible some of the stone used for the pillared gateway were taken from the fort, but still no original wall found so we walked on the short distance to the site of Milecastle 22 and the roundabout of the A68 Dere Street and B6318 where we found haven at the Errington Arms. We broke off from the day's walking to enjoy refreshments in the pub for half an hour to chat in the cosy surroundings. It was a welcome rest. 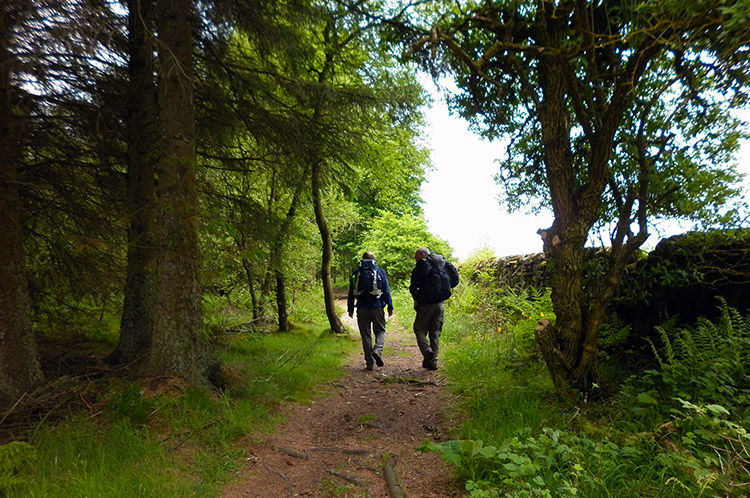 Walking on the edge of Stanley Plantation 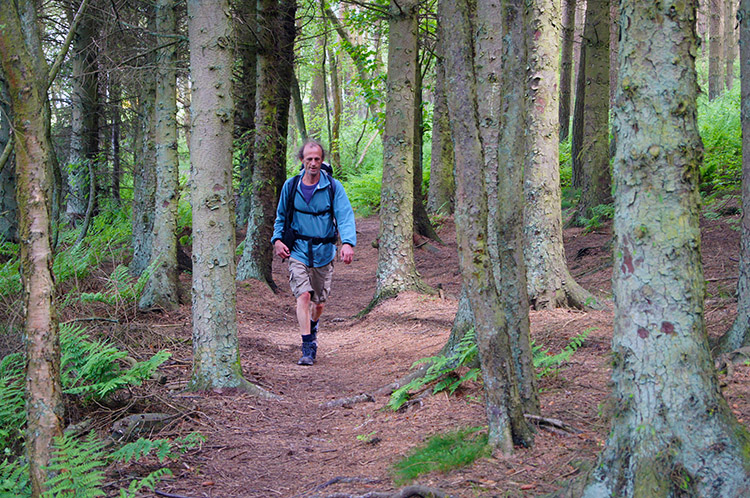 Dave about to emerge from Stanley Plantation

I can not recall what we talked about in the pub but I do remember Dave juggling with some of the table furniture while we took refreshment. He's quite a master of the art. On resumption of the walk we crossed fields towards Stanley Plantation, a delightful short passage of woodland, part managed conifer and part natural native trees. On this stretch we caught up with and passed a friendly solo Spanish walker we had met twice before earlier in the day who was walking the trail at a more sedentary pace. Not that we were motoring on, taking it easy at a steady ramble rather than a military march. 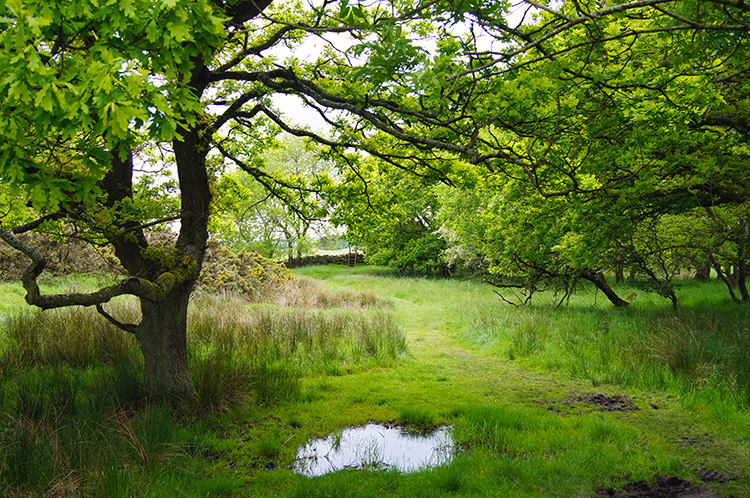 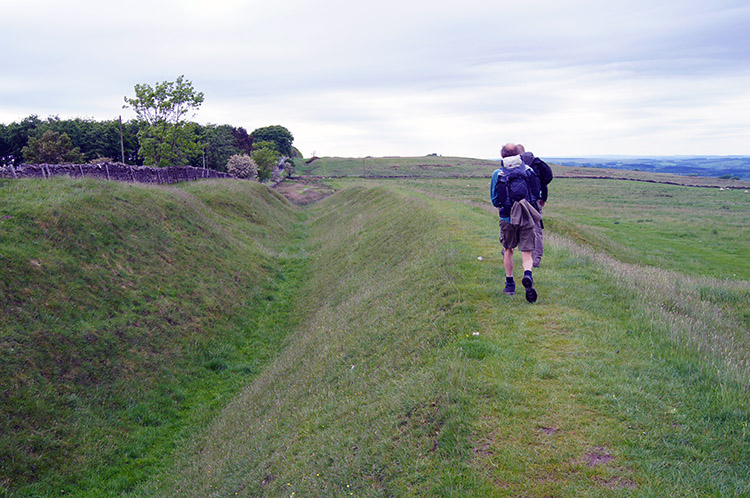 After walking through the green canopy provided by Stanley Plantation we reached a small but exquisitely beautiful dell on Errington Hill which was a joy to behold and delightful to walk through. From beauty to bleak as we then walked ever westwards from Errington Hill Head towards St Oswald's Hill Head Farm but at least we could now clearly identify the North Ditch dug by the Romans on the north side of the original wall to impede marauding Picts and north men who desired to plunder south. As we walked by the side of the North Ditch I sensed the actual wall was getting closer. As I sensed such excitement ahead of us we passed the site of Milecastle 25 without noticing anything, the 25th consecutive Milecastle hidden without evidence. 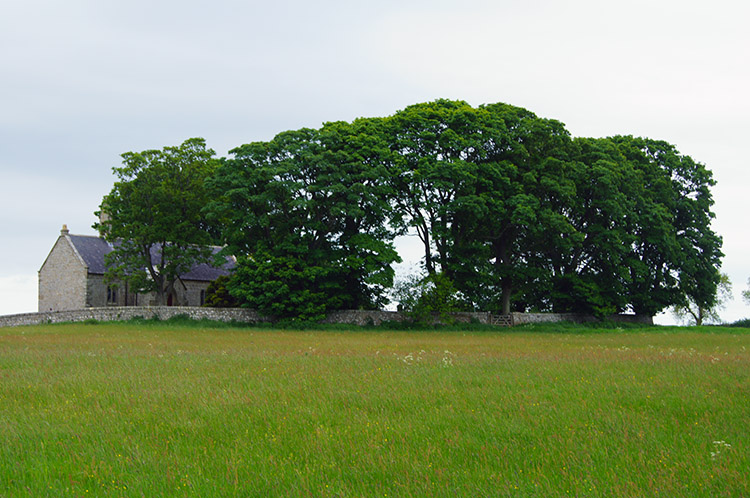 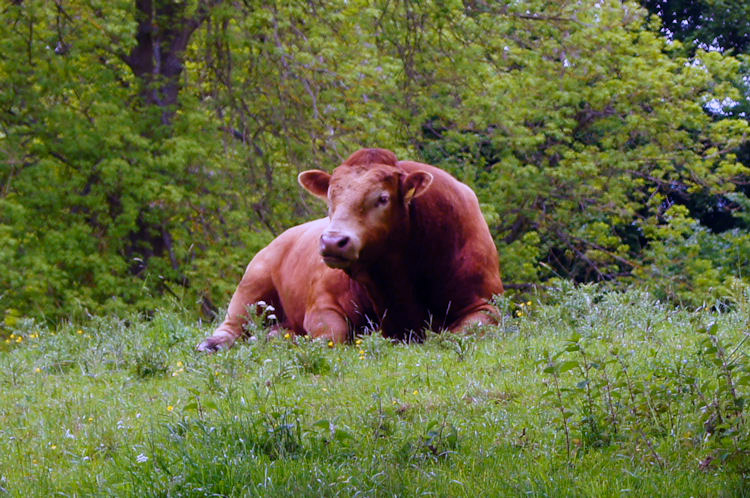 We were pleased the Bull was at rest

At St Oswald's I noticed a church across a field which was sheltered by trees on the east side and completely surrounded by a stone wall. The church, St Oswald's of Heavenfield stands on the site of a English versus Welsh battle in the dark ages, circa 633/ 634. The Battle of Heavenfield was won by the English side, not surprising given their home advantage. After passing the site of the battle we strode down a field on quite a gradient and crossed a wall stile into another field where we spotted a big lad of a bull high on a bank to our right. Fortunately he was at rest and with him not looking at all excited or intimidating we crossed over the field but with eyes on him just the same. We then reached the site of Milecastle 26, still not any evidence at all of its presence and then we left the fields and crossed the road. 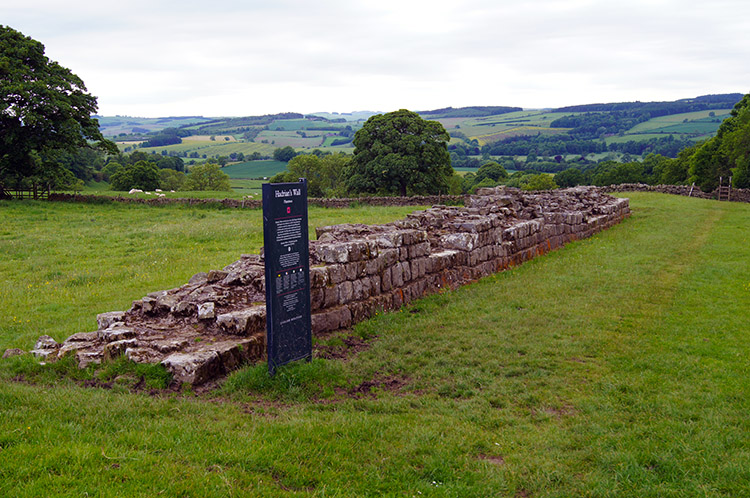 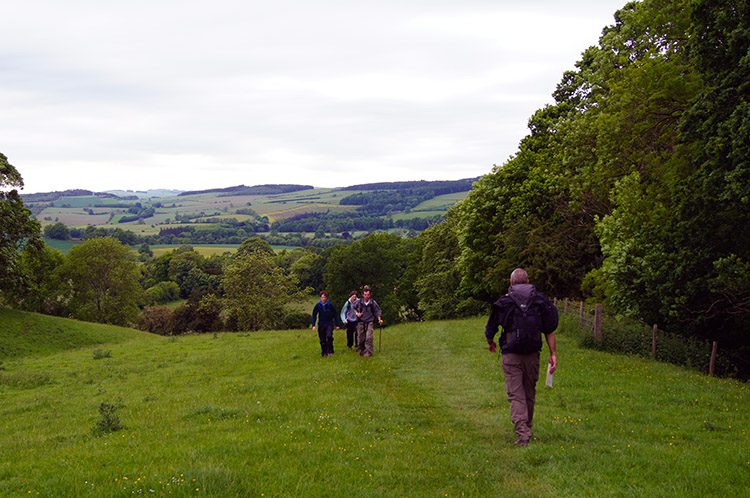 The view from Planetrees to the west

After crossing the road to Planetrees it happened. There, right before our eyes was Hadrian's Wall! Only a short stretch of it, the Planetrees section of Hadrian's Wall is just 15 metres long but it is clearly an impressive section of the wall, a work of robust construction. After 25 miles of what had been a wall extending from our beginning from our start point in the east we had finally reached an existing piece of Roman history. We explored it for some while, commenting on the fine mason's work and precise alignment before continuing on our way and with excellent views of the outstanding countryside before our eyes. We were all heartened by seeing our first piece of Hadrian's Wall as we walked on to the junction of the A6079 and BB6318 to conclude our days walking at Low Brunton near Chollerford. Here we called a taxi and waited for it to be taken to our accommodation in Acomb near Hexham. Oh, I nearly forgot - it was the third fine day in a row. No rain until Chollerford; quite amazing.