This third stage of the Ridgeway is a fairly flat one with all the climbing and descending done gradually; there being no significant hills for the first half of the walk which is a dead straight walk along Swan's Way. The second half of the walk after leaving Swan's Way at North Farm is more interesting over easy undulating hills from Swyncombe Downs through to Nuffield. After Nuffield prepare to follow Grim's Ditch to Wallingford which is truly fascinating. 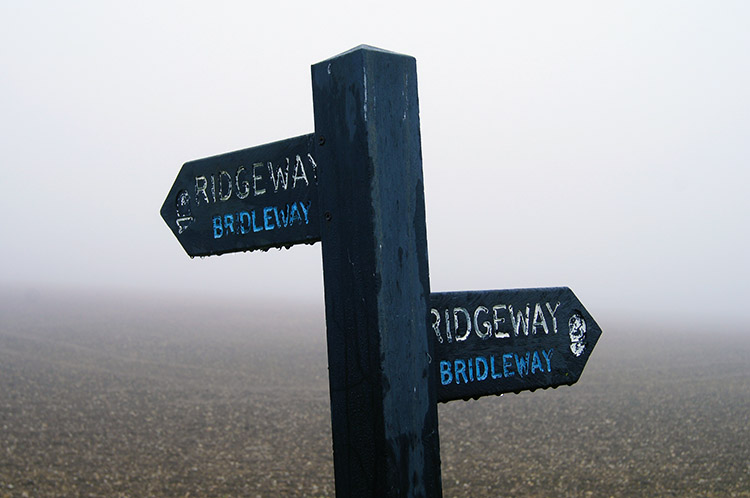 A misty morning for walking 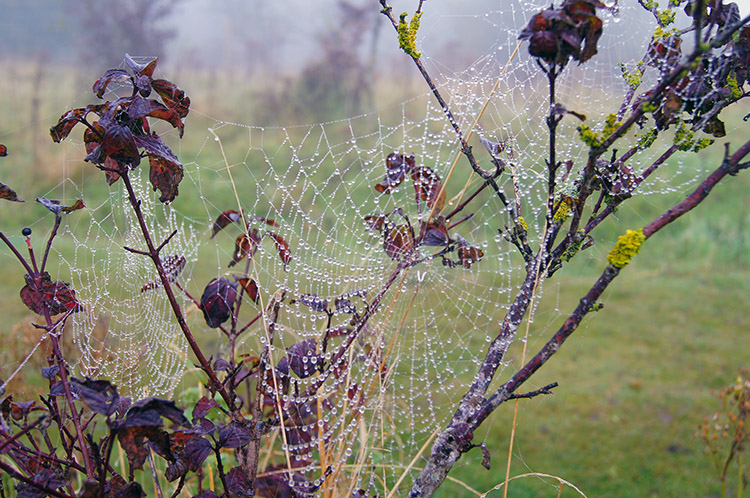 After the lovely weather of yesterday I was faced with a depressing start to my third day along the Ridgeway. It was miserable as I reluctantly stepped out of my cosy accommodation to track back along the road from Chinnor to my resumption point. Once reacquainted with the trail I began walking south west on a very straight course. On this section of the walk I was closed in on a wide bridleway, closed in at both sides by thick hedgerows. The only interest I found was by checking out the threatening signs warning me not to trespass in the local quarry and afterwards by the array of spiders webs exposed quite clearly by the prosperous morning dew. Such pleasures of diversion from the drizzle were most welcome. 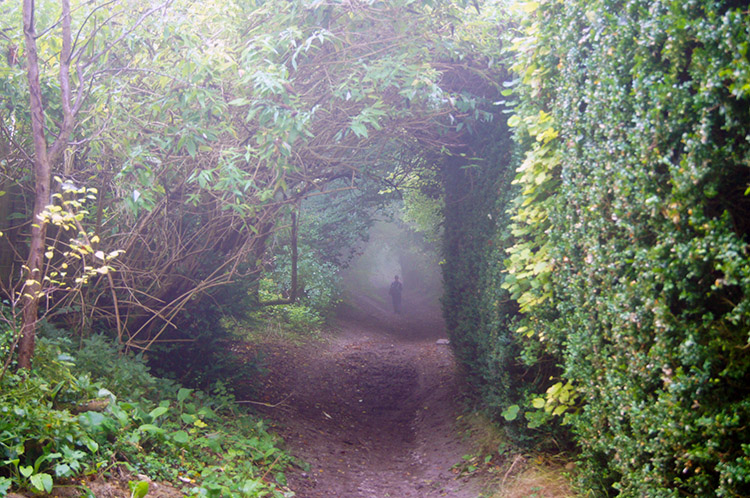 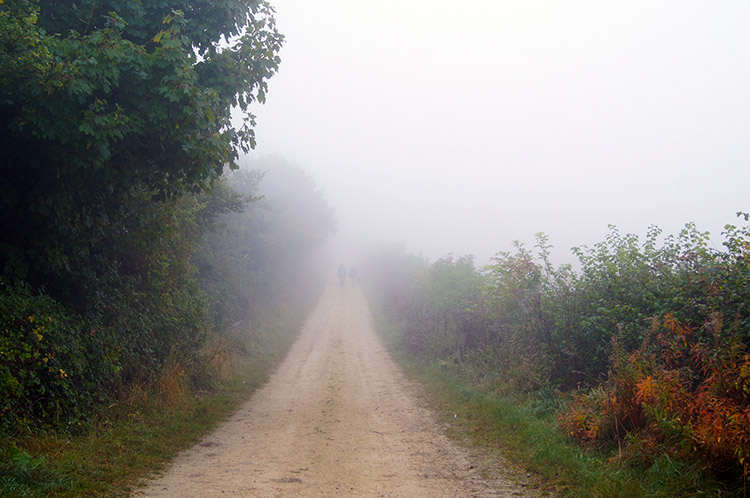 The light but persistent rain continued as I walked on the enclosed straight line of walking which would be the story of the first half of the day. I pined for the open spaces and diverse territories I had walked yesterday as I trudged along the way. At least I was making the miles though and sometimes I spotted the odd walker ahead of me. Or was it a mirage? Each one I spotted seemed to disappear before I could draw up close. Ghosts of the past? After all I was on a very ancient trail. I continued on the very direct course and while doing so cheered myself up as I passed paths leading off to the right to the villages of Kingston Blount and Aston Rowant. At least I could tick them off in my mind. 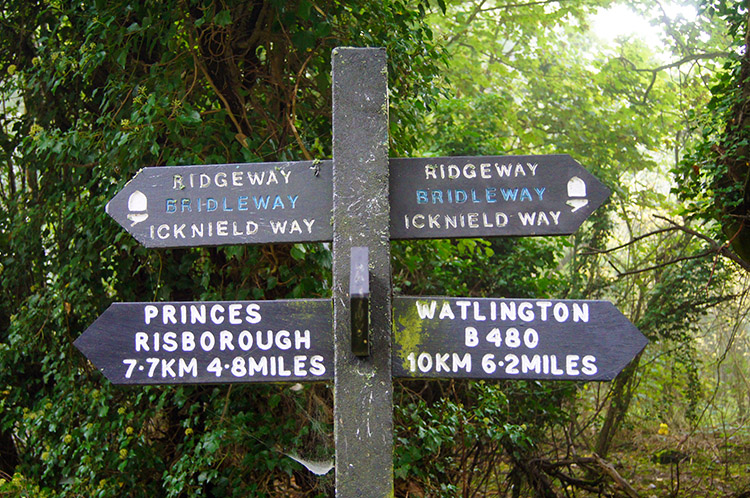 Cannot get lost on this stretch of the Ridgeway 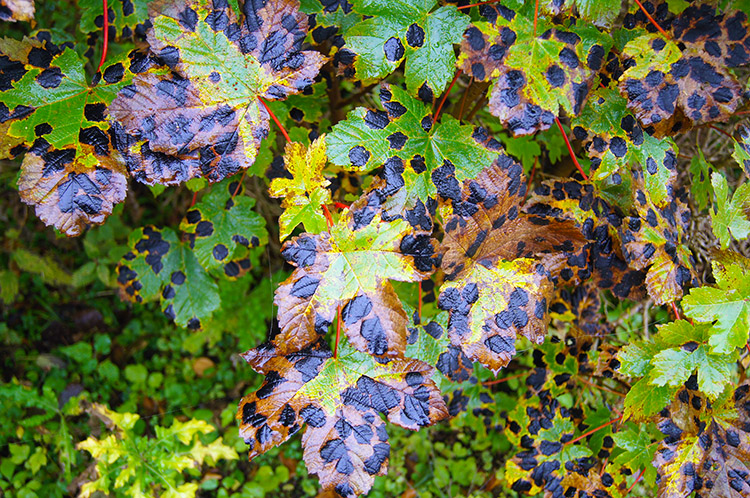 The bridleway continued on its unwavering course and so I continued to entertain myself by looking right and left to spot whatever could divert my attention from the march. Although the rain was abating the low cloud was not giving up so the sides of the path were all I could see. I was reduced to scrutinising way posts and the condition of path side foliage. Tar spot afflicted Sycamore. I was pleased to read that whilst the large leaf spots sometimes cause gardeners concern, they actually do very little damage to the tree. Jolly good. 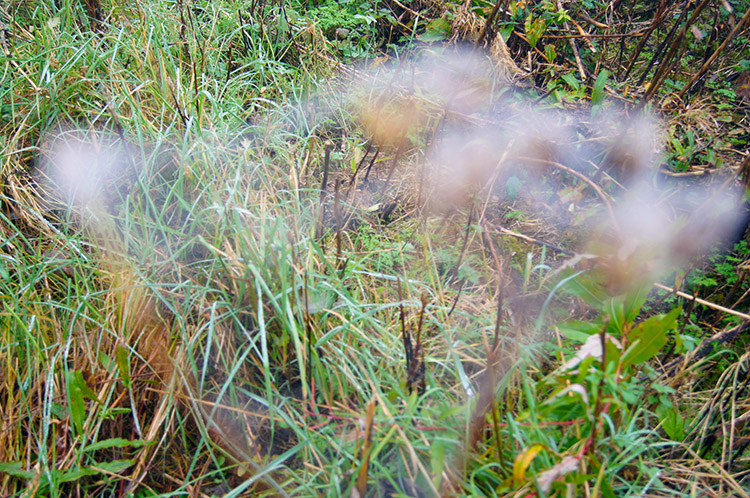 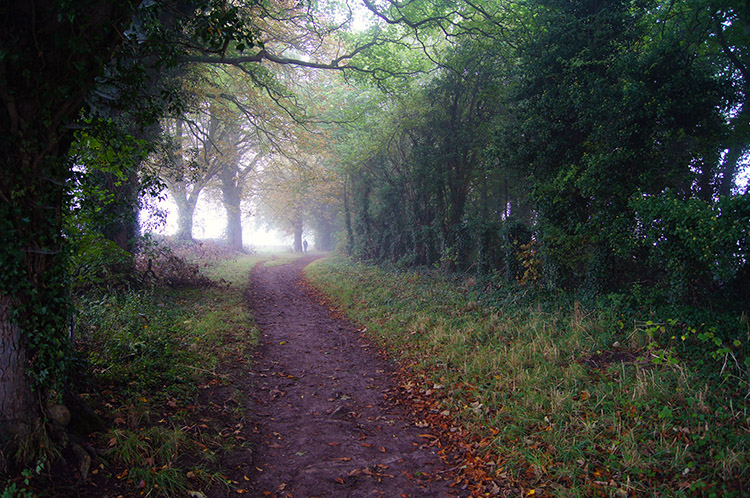 First glint of an improvement at Cuckoo Pen

And so it continued, a straight line walk along an unerring bridleway. I continued to look for images out of the ordinary. Fine seeds on some path side plants appeared ghostly with fine droplets of dew covering them. Oh, what was my imagination doing to me? Then at the point of despair came relief - I spotted a glint of light promising views would improve. Surely I did, not another hopeful thought which was not of reality. 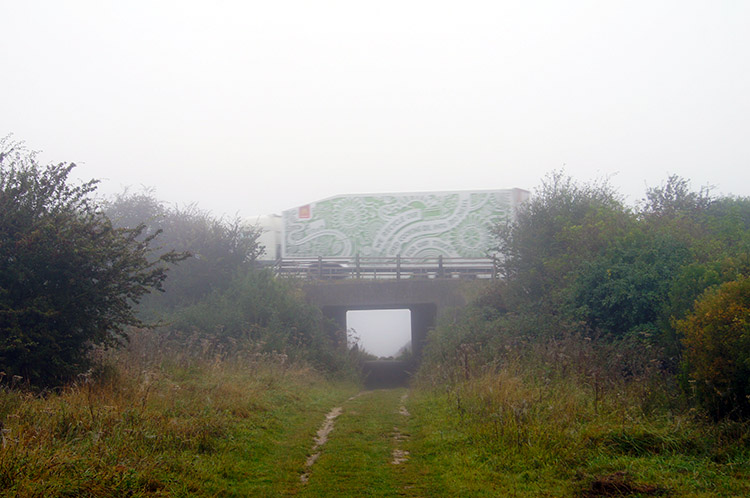 The Ridgeway underpass of the M40 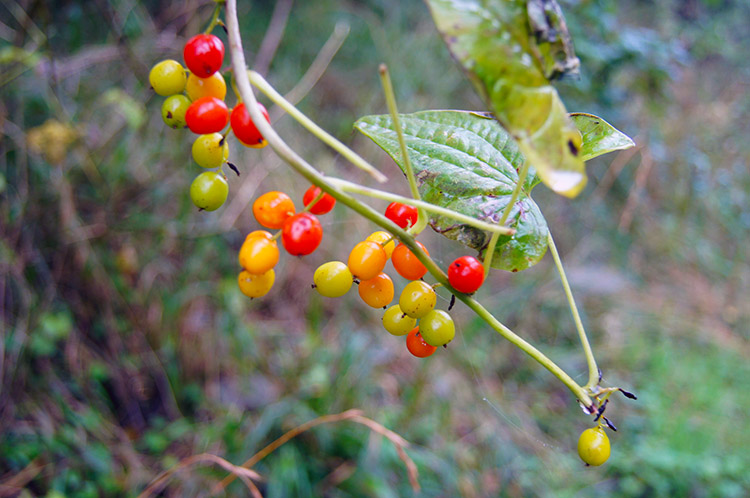 I had been walking for just three miles when I came to the underpass which would take me under the A40 motorway. It had seemed much longer but the underpass did come as a blessed relief. Still the path continued to be unerringly straight from the other side of the motorway but it was a point of note to mark off on my day. The underpass itself was grotesque - bored youngsters must congregate in it regularly for there were empty beer bottles and cans strewn everywhere. Tab ends too; I would not want to be walking under at night. Nor should you. After despairing at the disgusting state of the underpass I walked away from it as quickly and continued on towards Watlington. 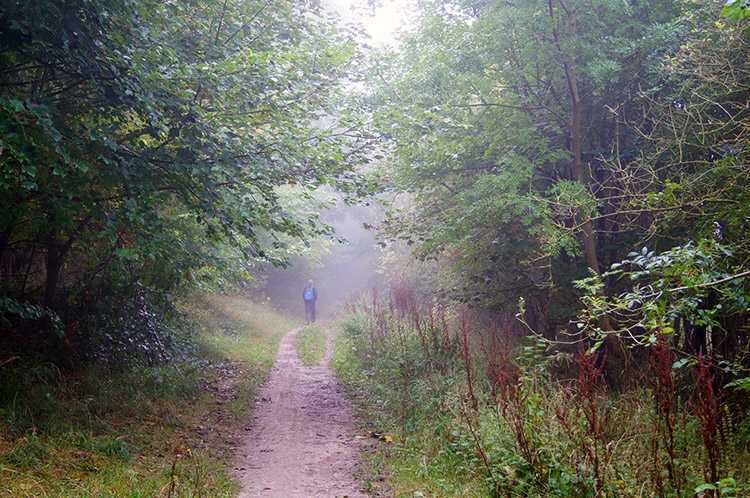 A walker ahead of me near Watlington 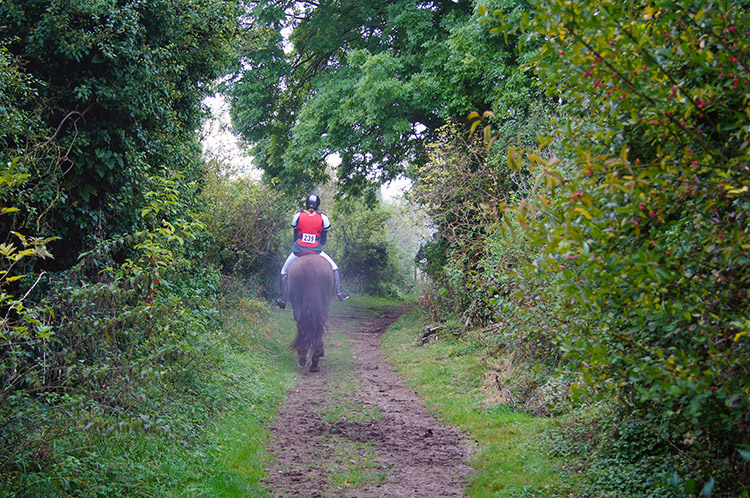 A rider ahead of me near Britwell Salome

The first mile of walking beyond the M40 was pretty much the same as before but at least I found myself in the company of other people on the trail. One chap ahead of me had set out from nearby Stokenchurch and was doing a circular walk of the Chiltern Hills, combining this stretch of the Ridgeway with the Chiltern Way. He too was disappointed with the overcast conditions but having booked the day off work to do the circular had no choice but endure it. Afterwards I met a couple of riders who cut off the Ridgeway by turning right to follow a bridleway towards Pryton Field Farm. I presumed they were then going to Watlington. Soon after I came to a road which linked Watlington to the quaintly named Christmas Common. At the road I saw a sign pointing to White Mark. I chose not to detour to it and later discovered it to be cut into the chalk in 1784 though others thought it was of unknown origin. Whoever did it left their mark. 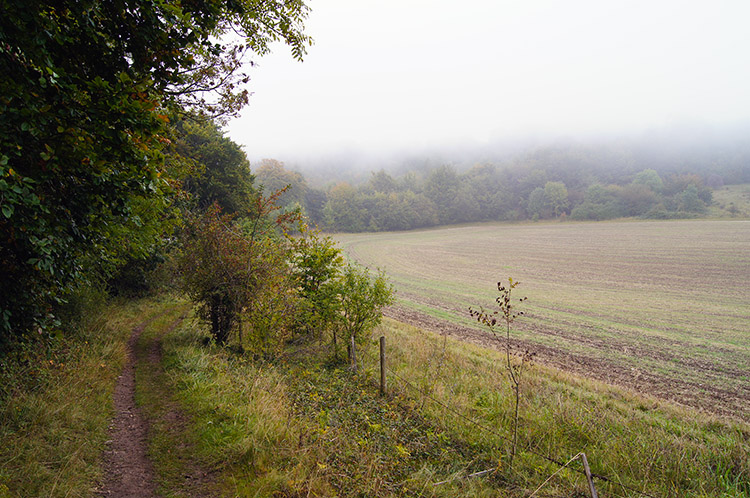 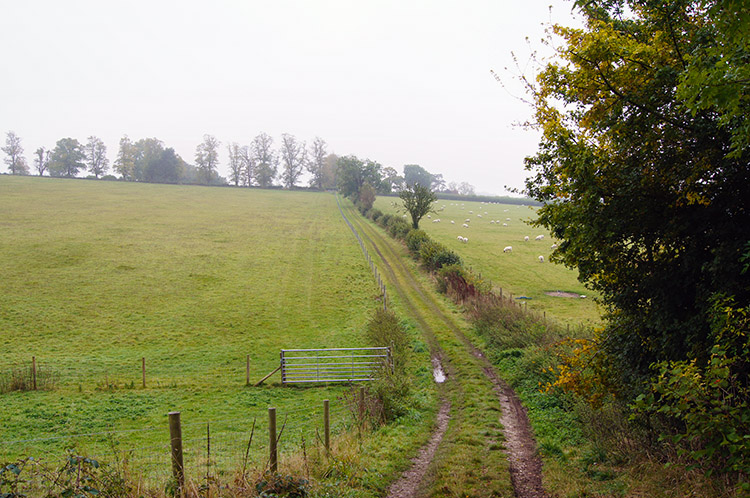 The short climb to Swyncombe House

After the road junction for Watlington I started to climb for the first time, albeit gradually on the same direct and somewhat muddy bridleway towards North Farm. On this stretch I passed more groups of horse riders travelling at a pace not much greater than mine on foot. Keeping them in sight they kept my interest from the continuing boredom of the straight course but then, at last, after 7.5 miles of walking on the straight low level trail I made my first turn of the day, a left hander and then lo and behold I was on a proper climb over Swyncombe Downs. As I climbed the track towards Dean Wood I heard voices in the distance on top of the downs near Westernend Shaw. The accompanying clip clop informed me it was yet more riders but I did not see them. They were gone as I continued through the wood but I guessed the wood to be a popular riders spot. Small wooden fences ne3xt to the path for practicing horse jumping gave the game away. This diversion was really interesting after what had gone before and I was a little disappointed to leave the wood to follow the track towards Swyncombe House. 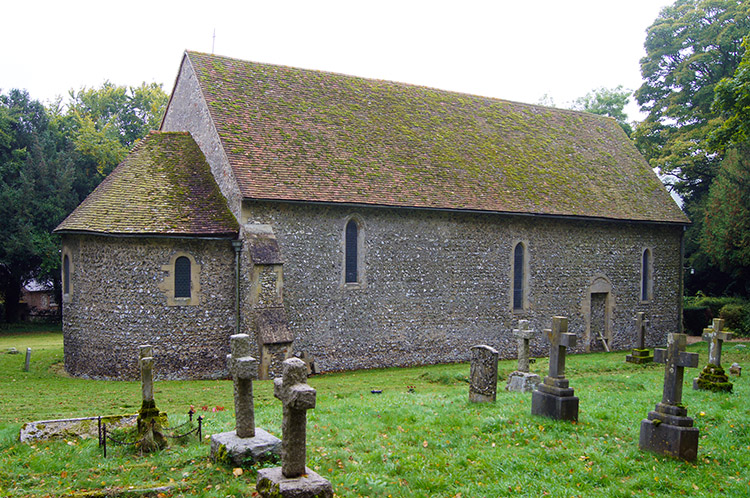 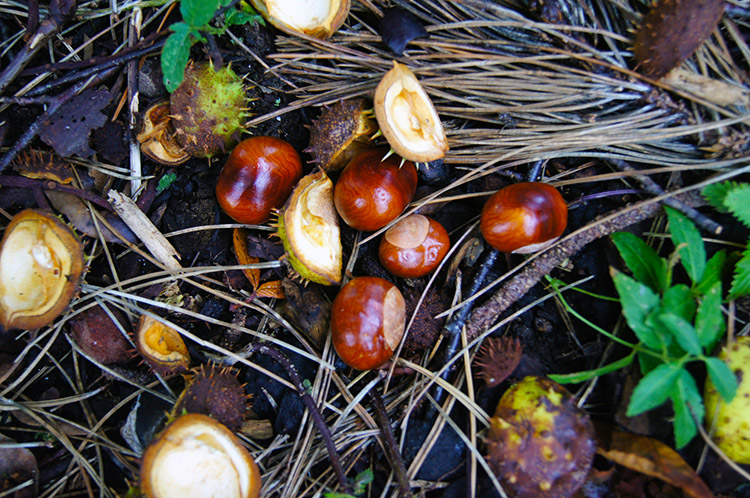 After the descent from Swyncombe Downs and a short climb to White Hill I crossed a road and walked down another towards Swyncombe House. Just before the house I stopped to explore St Botolph's Church, dedicated to Botwulf of Thorney who was an English abbot and saint. He is the patron saint of travellers so I felt a connection with him while viewing the sparse but iconic church. The church is a listed building. After leaving the church grounds I walked past the high walls of Swyncombe House and then left the unmade road to follow the Ridgeway up a field and through a wood towards Ewelme Park. 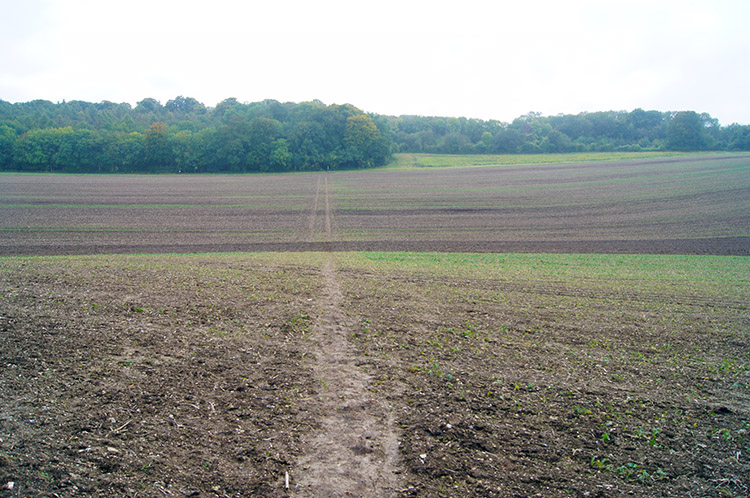 The field crossing after Ewelme Park 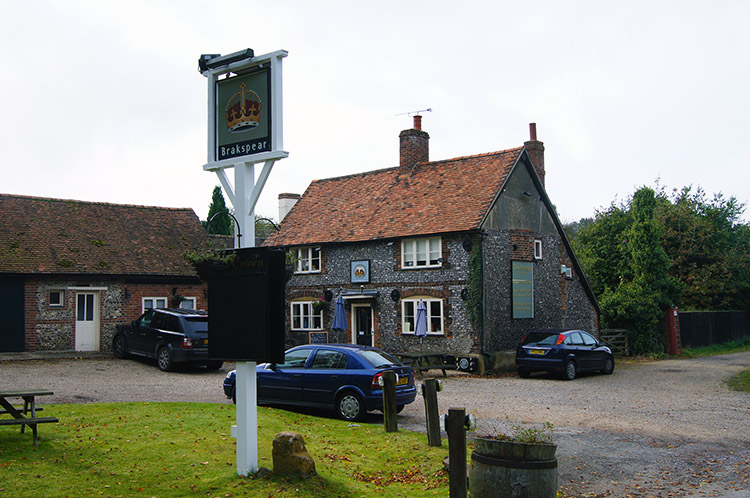 The Crown at Nuffield

Ewelme Park is a grand house and there were Peacocks strolling around the grounds of the place. After walking on the Ridgeway path through the grounds I came to a wide open field. The path was clearly laid out in front of me, hard packed mud of a cropped field and a post in the far distance pointed me straight across. As I began to cross the field more glints of milky sunshine penetrated the autumnal sky. I thought "I might yet get a sunny finish to the day". On crossing the large field which shows on the map as two but is but one I walked through a delightful small copse to meet the A4130 at Gangsdown Hill. Across the road was the Crown public house. I decided against venturing in and continued on my way into Nuffield by walking through Hunterfield Golf Club. I did this by sticking to the Ridgeway path though and keeping off the fairways. 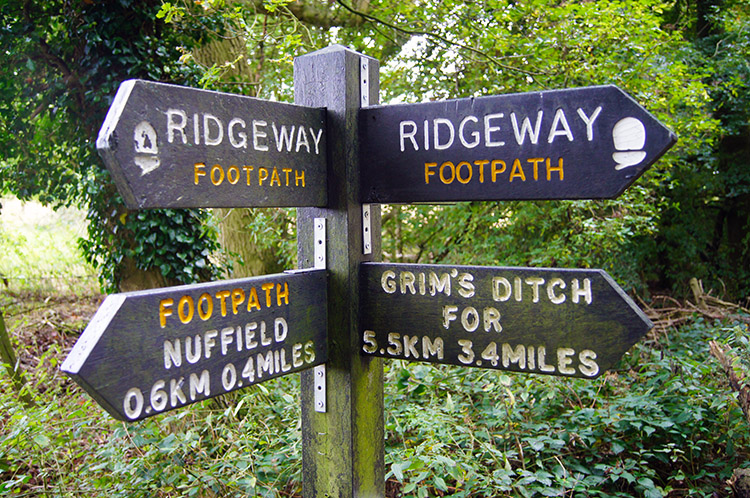 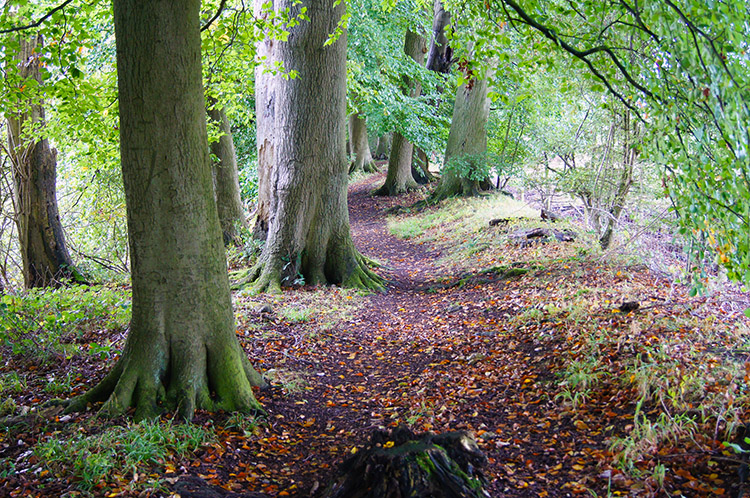 The Ridgeway along Grim's Ditch

I looked for a shop in Nuffield but could not find one so instead sat myself on a village bench and took out my provisions for a snack and a drink. Unbelievably as I did so the sun came out fully for the first time and blue skies began to show in the mid afternoon sky. I was heartened as I took my break and while doing so I viewed the map for what to expect during the rest of the walk to Wallingford. I noted that soon after leaving the village were 3.5 more miles dead straight but this time along an interesting stretch of walking along Grim's Ditch. After skirting the edge of two small fields I reached the east end of the ditch and I was pleased to see I would be walking along a raised bank rather than in the ditch beside it. What was more heartening was the sight of seeing the path being entirely tree lined; a narrow raised avenue I could walk briskly along. 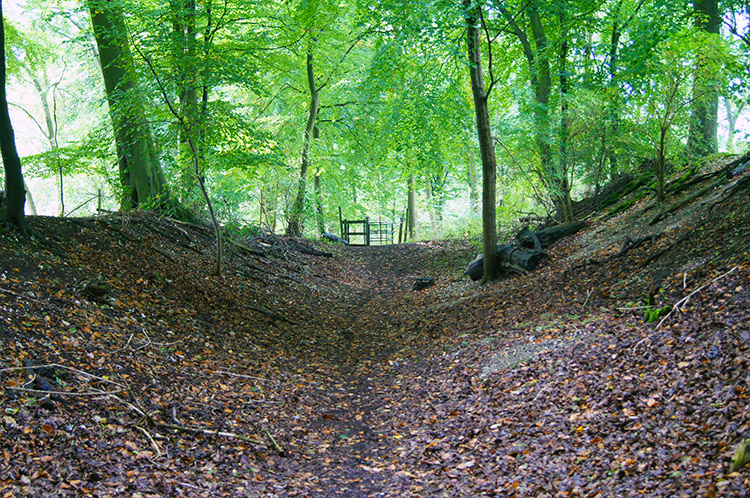 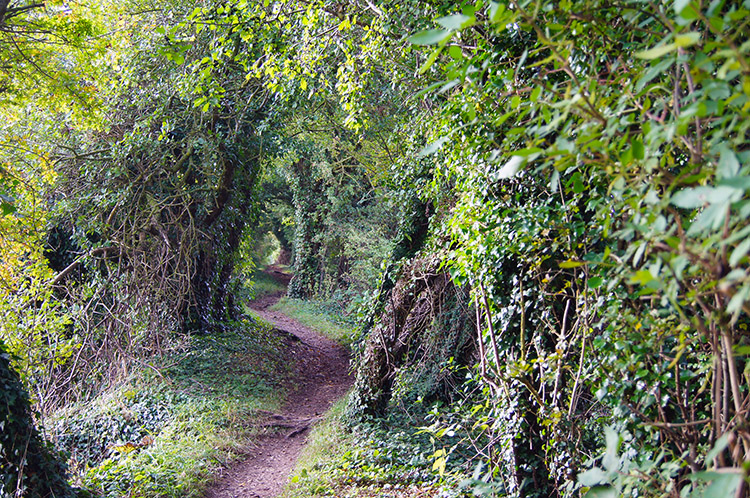 The first mile of walking along Grim's Ditch was brilliant. I was thrilled with walking again and revelling in my final miles of the day, a huge contrast to those first ones in the gloom. The path was not always raised on the bank but sometimes dropped into lovely hollows which were thickly filled with fallen leaves, all dry enough to kick freely just as I did when a youngster in the woods of North Yorkshire. Holloways gave themselves up to raised banks again, both the ups and downs of Grim's Ditch ever tree lined. Often I was in the middle of the narrow tree line but sometimes the path took me to the edge and into the bright low afternoon sunshine. I wanted to know more about the meaning of Grim's Ditch as I walked and noting I had walked my first section of a Grim's Ditch near Tring on the first stage of the Ridgeway I subsequently checked out the meaning - (Grim's Ditch, Grim's Dyke (also Grimsdyke, Grimes Dike or Grim's Bank) is a name shared by a number of prehistoric bank and ditch earthworks. Source Wikipedia) Knowing this I imagined the purpose of travellers passing along this route in times long past. 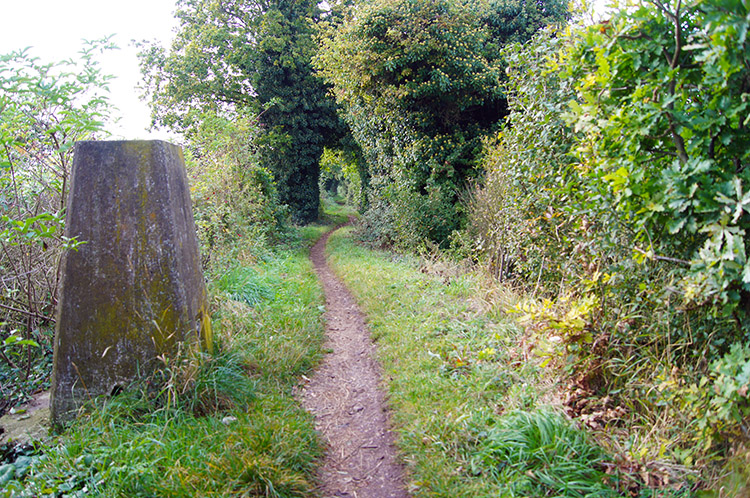 A unusual place to find a trig point 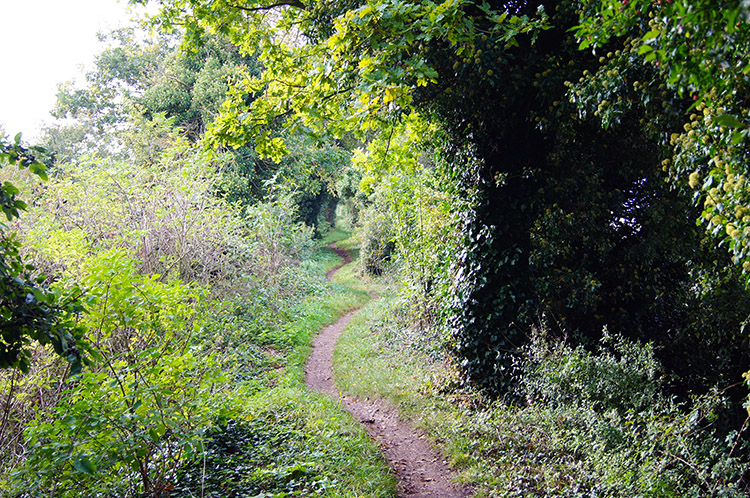 After walking more than half the length of this particular Grim's Ditch and after passing quaintly named places like Morrell's Bottom, Bachelor's Hill and Oaken Copse I came to a stretch also called Cart Gap when I came across a trig point hidden by the foliage avenue. The trig point stood proudly at 98m high. I tapped its top as I usually do when reaching a new trig point and then continued on my last mile of the day to meet the River Thames at Mongewell near Wallingford. Here Grim's Ditch ended at its western end and I finished my Ridgeway stage too. Thanks Grim's Ditch, you made me smile.

There is no doubt this stage is not the most interesting part of the Ridgeway Personally I found the section between Chinnor and Swyncombe Downs drab and I cannot imagine brilliant sunshine would make it anything but an acceptable passage. However the Ridgeway from Swyncombe Downs to Wallingford was memorable with the rolling hills, the ancient church and Grim's Ditch all delightful places. I will remember all with affection when I look back in years to come.