As good a final stage as any on a National Trail with my extended section at the end a must do which features possibly the most impressive long barrow in the country, a mysterious artificial hill and the most impressive stone circle in England. Barbury Castle is also an impressive point on the route though there is one drawback. The section from Hackpen Hill to Overton Down is deeply rutted by off road vehicles and can be a nightmare in the wet. 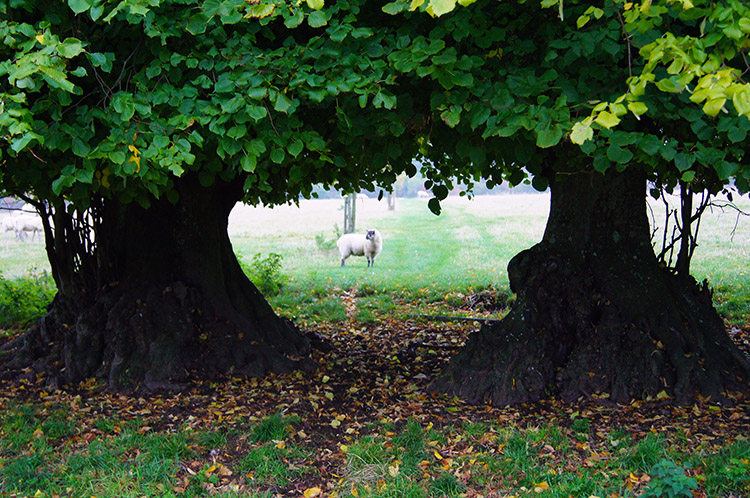 Path through the trees near Ogbourne St George 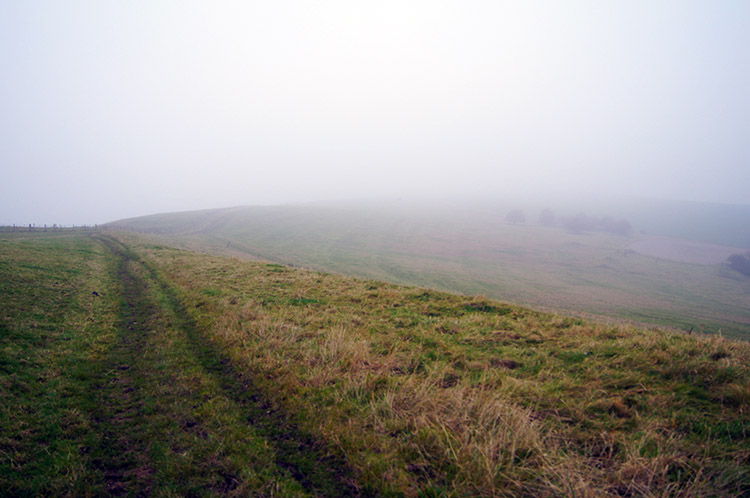 The weather let me down. It had been touch and go how the morning would turn out as I retired the previous evening, it could have been fair or rain passing overnight could linger. To my disappointment it lingered and most depressingly it hung low with mist preventing me from any views at all. Oh well, I could not back out and I had to make the earliest possible start as my reward for finishing the walk was a long weekend in Bath with my wife Lil and she would be waiting for me in Avebury just after lunch. To enjoy a good look at the famous locations towards the end of the walk I set off at a brisk pace from Ogbourne St George and up onto Smeathe's Ridge. with no views to enjoy bar the path directly ahead of me I just keep going as fast as I could without burning myself out. 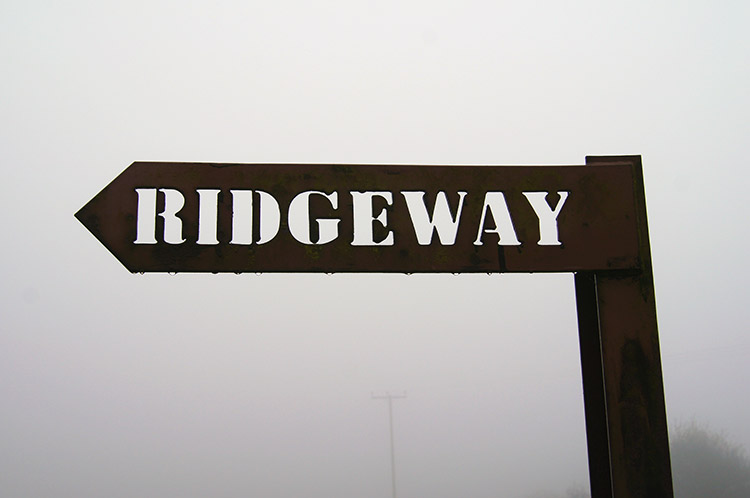 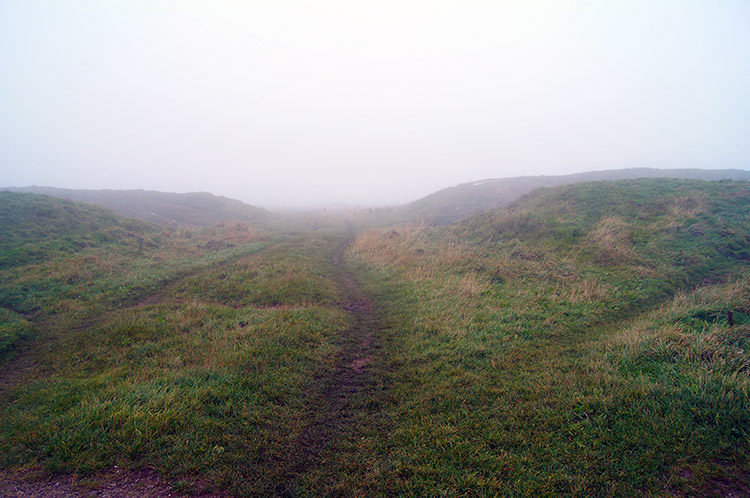 The visibility which had not been good in the low altitude of Ogbourne St George became nothing but a pea souper on the highest reaches of Smeathe's Ridge. I could not see more than a few yards ahead of me and almost bumped into a Ridgeway sign that appeared right in front of me. When its like this all you can do is walk and walk I did, soon reaching Barbury Castle Country Park. The map promised me a magnificent viewpoint looking out to the plains of the north. I had to imagine, there was no view to see but fuzz. So I continued through the country park on the Ridgeway by following the path bisecting Barbury Castle. Sheep were grazing in the sacred ground. 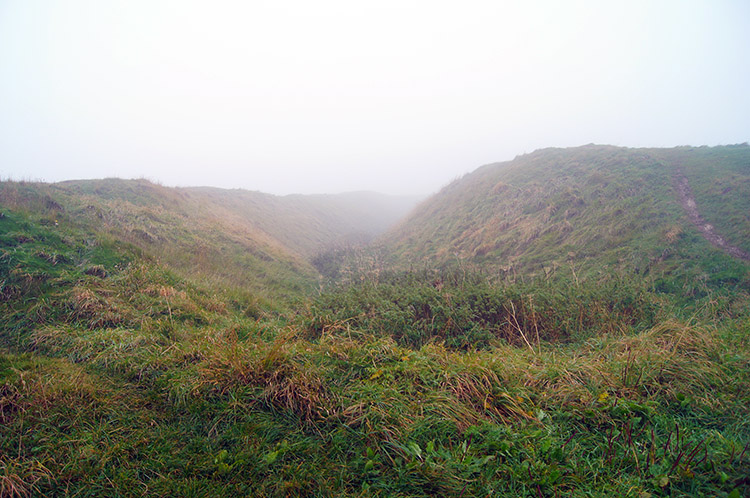 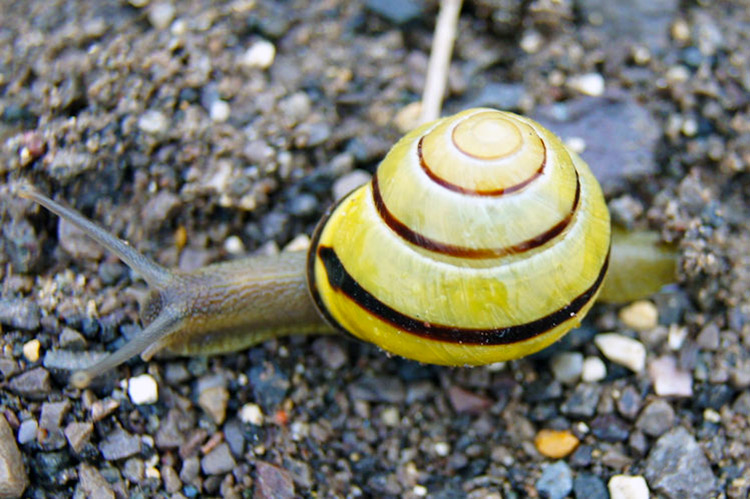 I kept going though the last of the hill forts on my Ridgeway walk without taking time to look any further than from the path. There was no point. Keeping a good pace I left the country park and continued towards Hackpen Hill. At least the ground underfoot was good and firm. At least on this section it was, things were set to change. 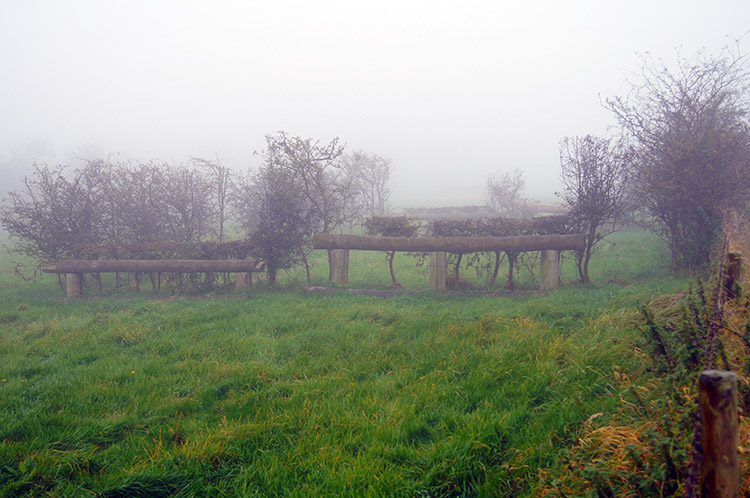 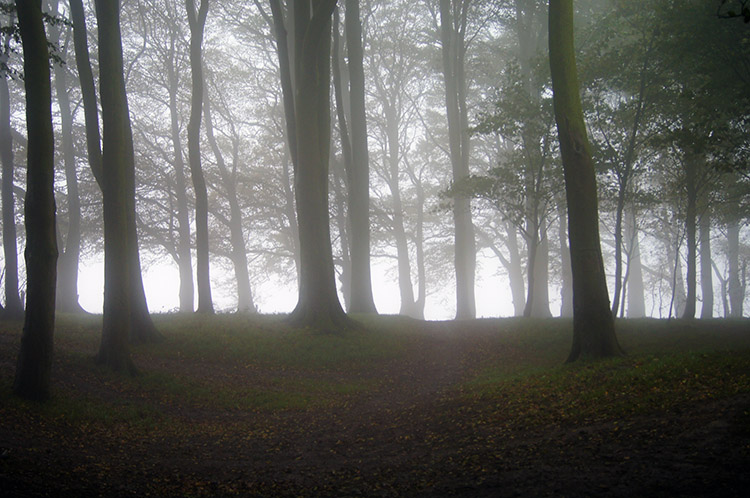 The low mist continued to hang around, there was little sign of improvement though I did reach a point on the path where a small copse provided a moody scene of the mist penetrating into the copse giving the picture a ghostly spectral feel. It was quite a highlight of what had been a dull walk. I stood for a while taking in the extraordinary view before resuming my walk and continuing my fast pace. The longer I did so the more time I would have to linger towards the end of the walk. 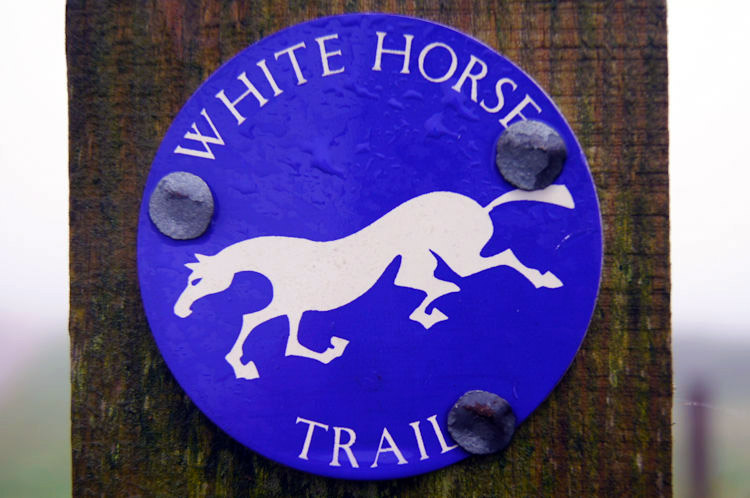 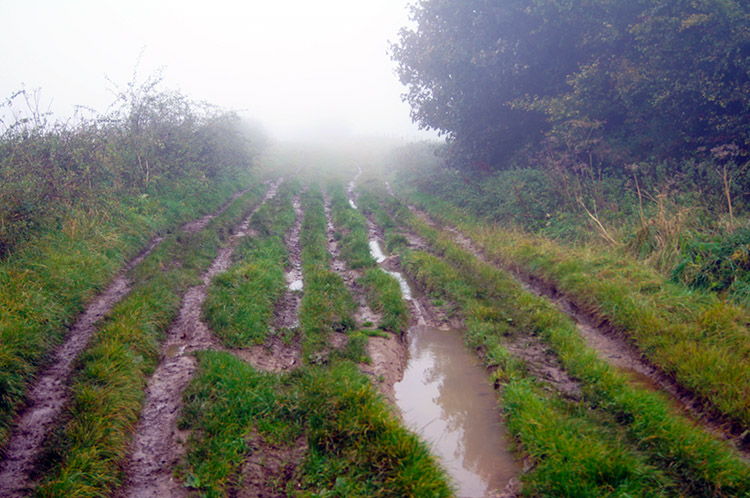 Ruts on the Ridgeway

The next point of interest was Hackpen Hill and here I crossed the path of the White Horse Trail. At the same point I could have followed the Wootton Bassett to Marlborough road a little way downhill towards Broad Hinton to find the Hackpen White Horse. But what would I see? The mist was still thick and maybe the effort would prove fruitless so I left it. I stuck to the Ridgeway and continued on from Hackpen Hill to Berwick Bassett Down. The further I walked the more the trail deteriorated. What had been firm underfoot became a quagmire and to make it worse off road vehicles had created deep ruts on the trail. I thought the Ridgeway was now vehicle free but this part is not. It became increasingly difficult to negotiate the path and I often had to leap over the ruts from one side to the other. The terrible section lasted for over two miles, only improving after Overton Down. At least the last official mile of the Ridgeway National Trail to Overton Hill was manageable. 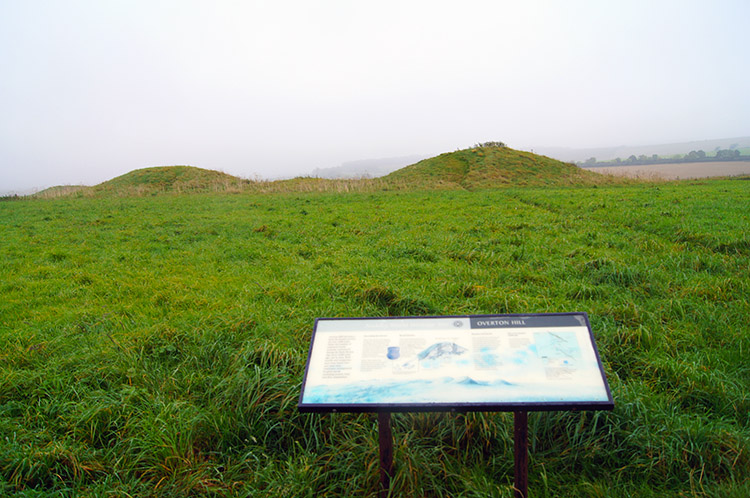 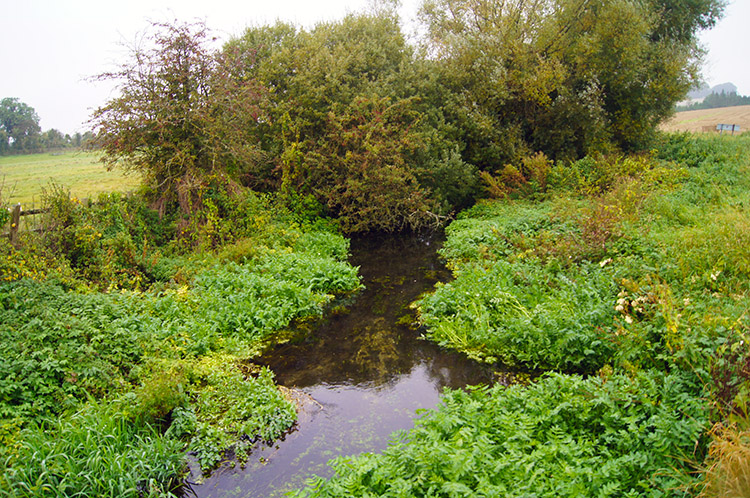 Stepping my feet on the now firm heavily, jumping a little and wiping my boots on grass at the side of the path got the mud off. I reached the end of the Ridgeway National Trail in decent condition. At the end of the official part of the walk I took a short break to read about the Overton Hill Barrows and the Sanctuary on the far side of the Beckhampton to Marlborough Road. The Sanctuary was once a timber stone circle now depicted in stone and I took a look at the site before continuing on towards East Kennett. After following a hedgerow path downhill I reached Swallowhead Spring near the village. 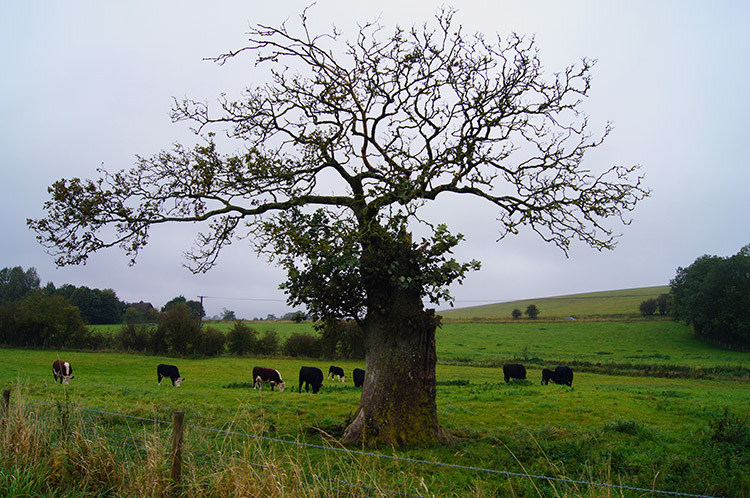 Hanging on to life 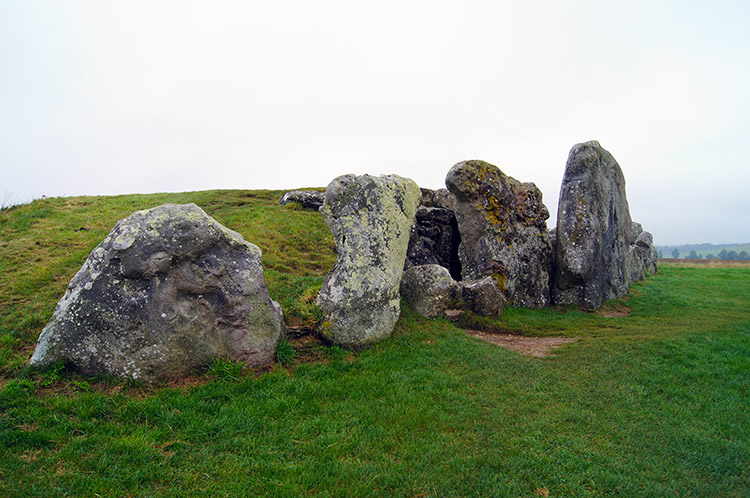 From Swallowhead Spring I turned from the southwards course I had been on since leaving Barbury Castle and followed paths westwards, paths which were extremely muddy in some places. I was now deep in the midst of rural Wiltshire and on land that has been in agricultural use for centuries. It did feel as if time was stood still around me and that feeling was most enhanced when I followed the track up and off the Ridgeway to West Kennett Long Barrow, a path I would have to backtrack on after my visit to the ancient site. This was a detour I was certainly taking though, I so much wanted to see the site. 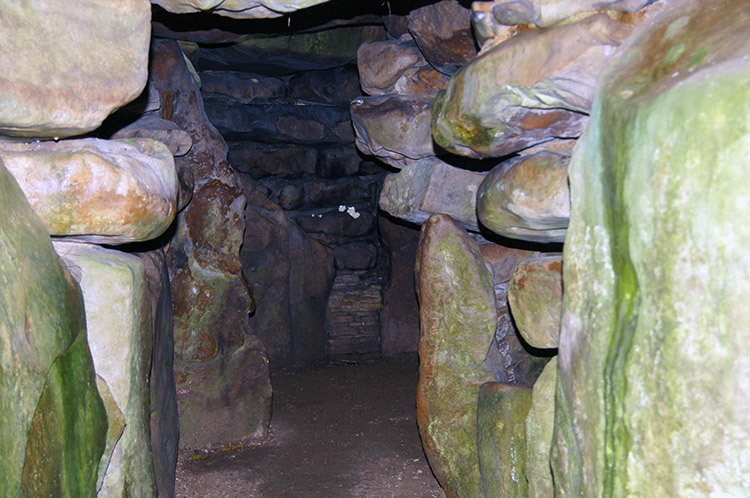 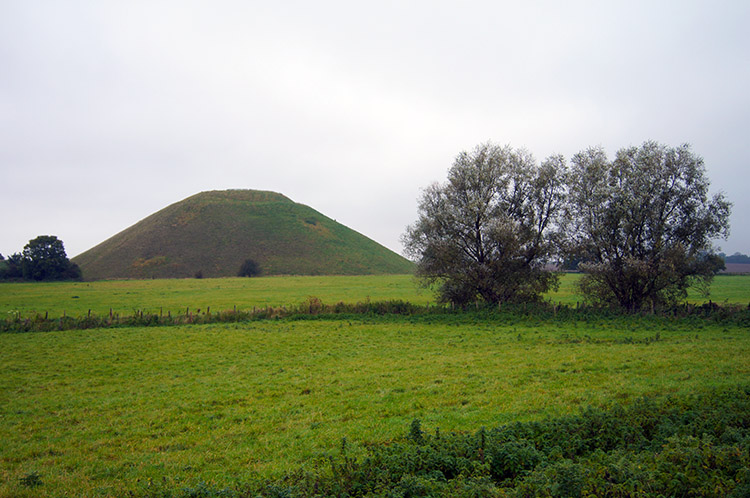 West Kennett Long Barrow did not disappoint. It is one of the largest, most impressive and most accessible Neolithic chambered tombs in Britain. Built in around 3650 BC, it was used for a short time as a burial chamber, nearly 50 people being buried here before the chambers were blocked. Part of the Avebury World Heritage Site it was the first of my final trinity homage to the Ridgeway. After looking inside the impressive chambers which are accessible I looked over to Silbury hill, my second trinity. Silbury Hill is a mystery. The largest man-made mound in Europe. Probably completed in around 2400 BC, it apparently contains no burial. Though clearly important in itself, its purpose and significance remain unknown. There is no access to the hill itself so I had to content myself with looking at it as I walked by on my way to Avebury. 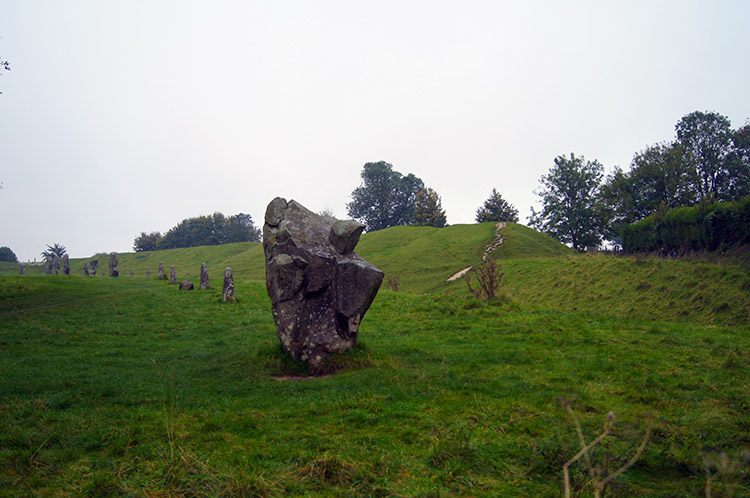 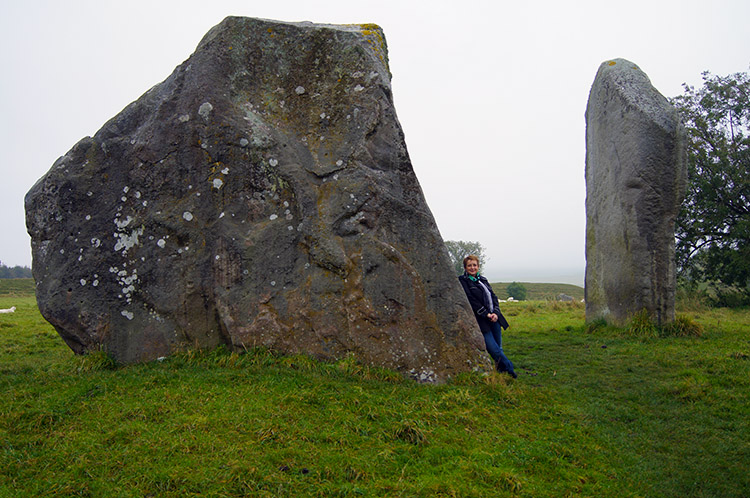 End of the journey

And so I came to the conclusion of my seven day and ninety mile long walk of my personal variation of the Ridgeway National Trail. And there was no better place to conclude the walk than in Avebury, home to the most impressive stone circle. In fact there are a series of stone circles on the site and it does appear stones are everywhere. Some can be found beyond the confines of the village but the most impressive are near its heart. I wandered around the site of the stone circle, walked into the village, found Lil and then took in a few more stones before declaring the walk finished. And what a walk, I had seen so many great sites, walking in many ancient and hallowed places. I had enjoyed walking through lovely small towns and villages and walked through the Prime Ministers country estate. I had visited a series of super monuments. I had enjoyed superb views from raised ground. I had walked through lovely woodland and I had followed many sections of notable trails. Most of all I had enjoyed long sections of walking in wild solitude. The Ridgeway was special and bar a couple of small parts which could be improved it is a really fine walk. I shall not forget it. And just I finished and got in the car for my lift to Bath it started raining heavily. Perhaps I got the best of the day after all.