The walk on this stage of the Ridgeway is generally easy going and after the first short half day the easiest day of walking of all. However it does include the biggest hazard in a section I am calling 'the disgrace of the Ridgeway'. The section in question is from Fox Hill to Liddington Hill, a one mile walk along the main road linking Wantage to the towns and villages south of Swindon. Be very cautious on this section of the walk; the remainder of the stage is wonderful with highlights being Charlbury Hill and Liddington Fort from where the view to Swindon is a great one to enjoy. 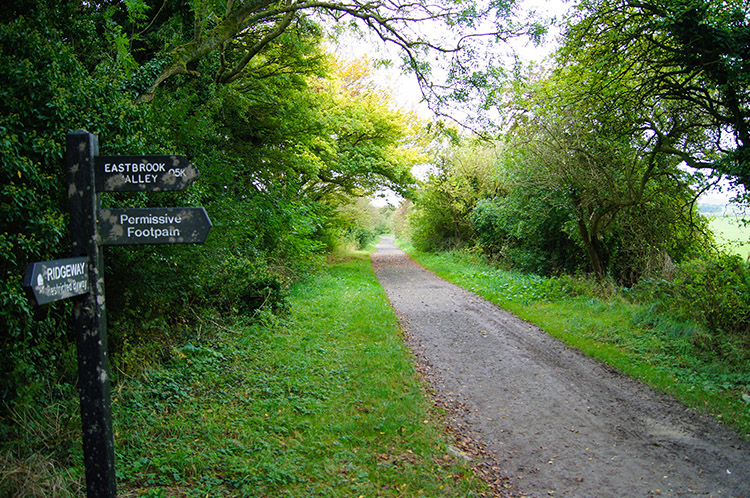 The path near Ridgeway Farm, Bishopstone 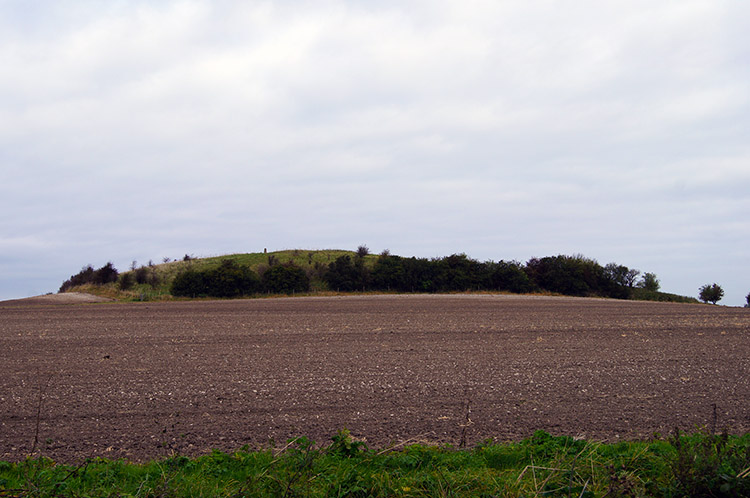 After the thrills of yesterdays stage in which I enjoyed visiting one ancient site after another today was a more relaxed affair. There was just one iron age fort to enjoy and with this being the shortest full day stage of my walk I could amble along at leisure. A word of advice, I was carrying only breakfast leftovers and a can of pop due to there being no shops in Ashbury, the last shop I had seen was in Wallingford three days ago, so be prepared with provisions for the west half of the Ridgeway. Anyway, my fayre was enough, I had filled up at breakfast, and after regaining the Ridgeway by ascending between fields on a path up Ashbury Hill I walked at my leisurely but sure pace to Ridgeway Farm where I crossed the Bishopstone to Nowhere Road. There are number of dead end roads which used to take vehicles onto the Ridgeway which they could use to link other now dead-end roads. Fortunately now the off roaders are banned these roads serve no purpose bar access to farms on the Ridgeway and to shepherd walkers back up to the path. After Ridgeway Farm which had an ugly tyre pile beside the path I continued on to reach Charlbury Hill. On the hill stands a trig point at 253m and it seemed to be a popular place with a few cars parked and walkers with dogs exercising. I continued on to Fox Hill. 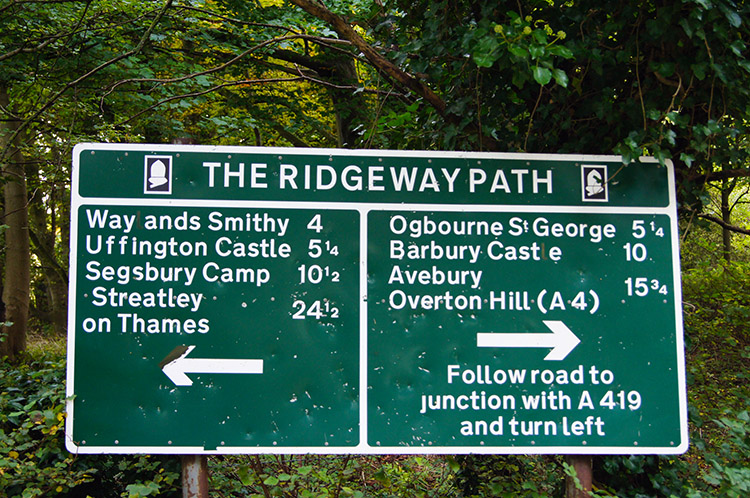 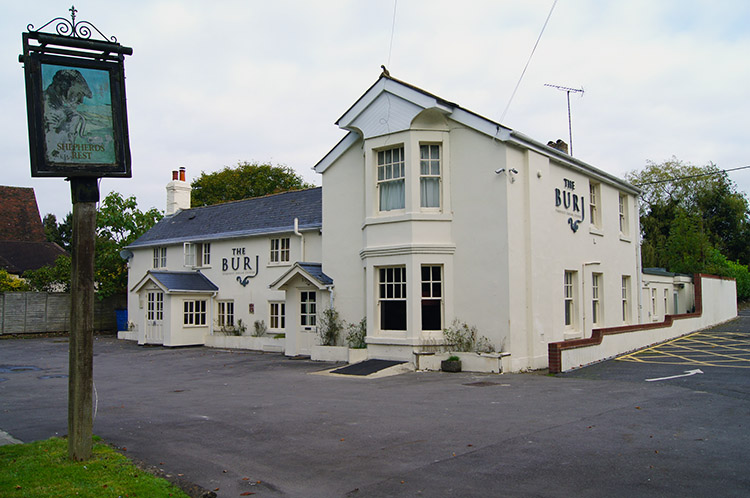 Once the Shepherd's Rest now the Burj

After a steady descent on the Ridgeway between Charlbury Hill and Fox Hill in which I passed the time of day with a day walker going in the other direction I came to a tarmac road. At this point below Fox Hill the Ridgeway simply changed from pleasant unmade track to busy highway. Traffic was passing me at some speed in both directions and there was scant intermittent verge to use which meant I was constantly ducking to the side of the road to avoid the traffic. At least the road was dead straight at this point as I could see them coming but after following the road over a bridge crossing the M4 motorway the road became a series of bends and the walking became quite dangerous. 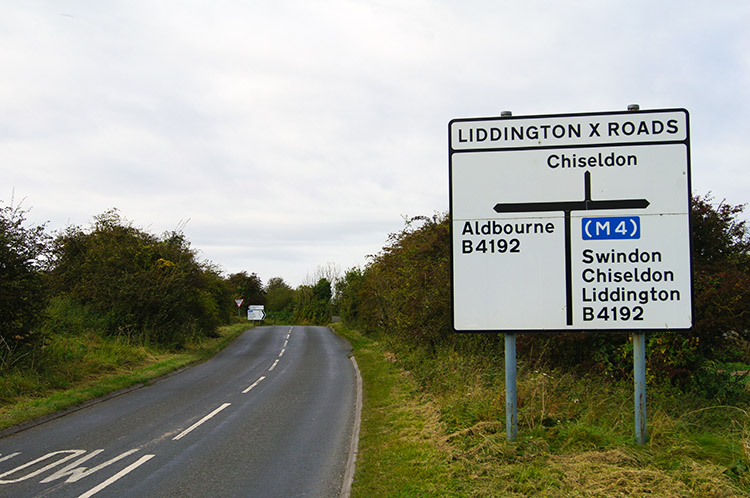 The disgrace of the Ridgeway 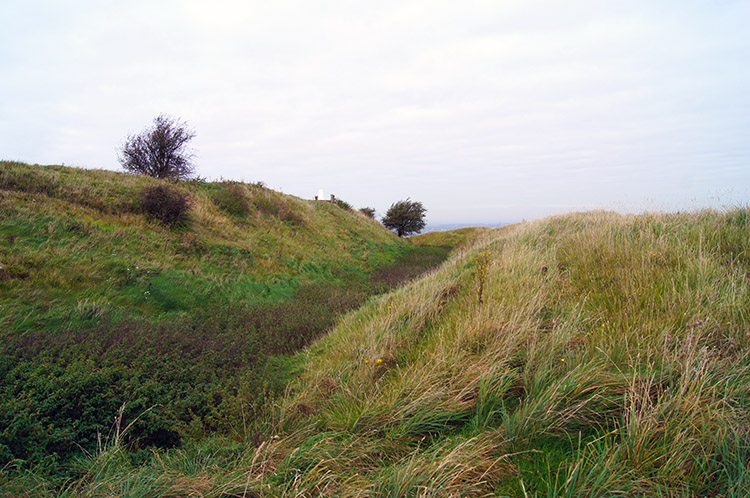 I took a good look at the map while ducked into a sheltered lee beside the road and saw there would have been a safe alternative along a bridleway to Manor Farm and then by farm road and field side tracks to the bottom of Liddington Hill. The only problem was it barred by the M4 just north of Manor Farm - probably so as otherwise the Ridgeway designers would have used it. Anyway, with my life in peril for this section of walking, particularly at Liddington X Roads I very cautiously took short bursts of rapid walking between streams of traffic until I reached the sanctuary of Liddington Hill where I left the road. Phew. Once on the peaceful confines of the hill climb I made my way up to Liddington Castle, my one and only ancient site of the day. I took time out to walk around the perimeter of the castle fort. Views to Swindon below to the north and expansive views beyond the town to north and west were to be seen from the vantage point of the ancient earth structure. 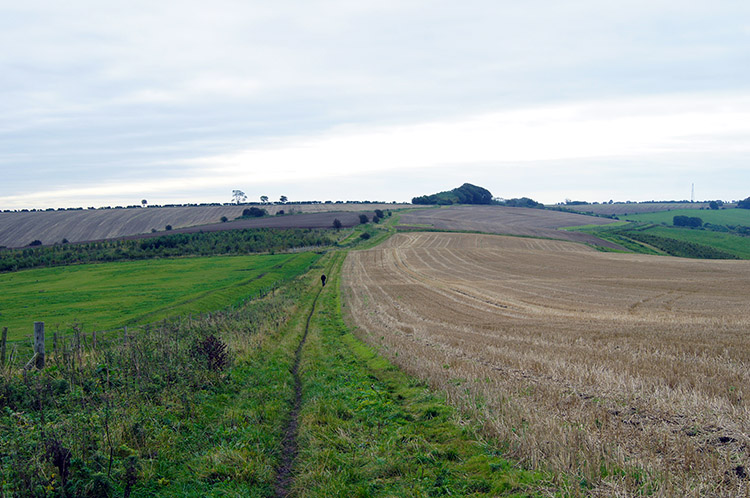 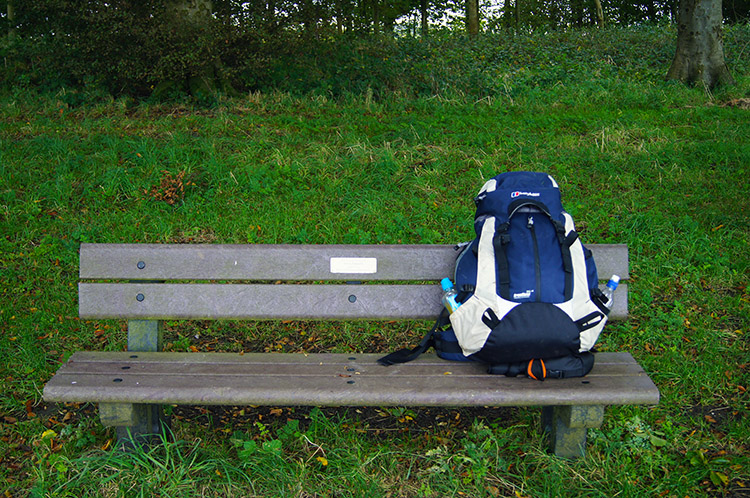 From Liddington Castle I continued on my way across a long expanse of downland towards Whitefield Hill which has a telecommunications mast for doubting map readers assurance. The path was clear though, there was no other obvious way to travel along the Ridgeway and so I made my way due south to Whitefield Hill then straight on keeping the die south line to Chase Wood, a delightful little copse of mature deciduous trees which had a very welcome bench beside the path. 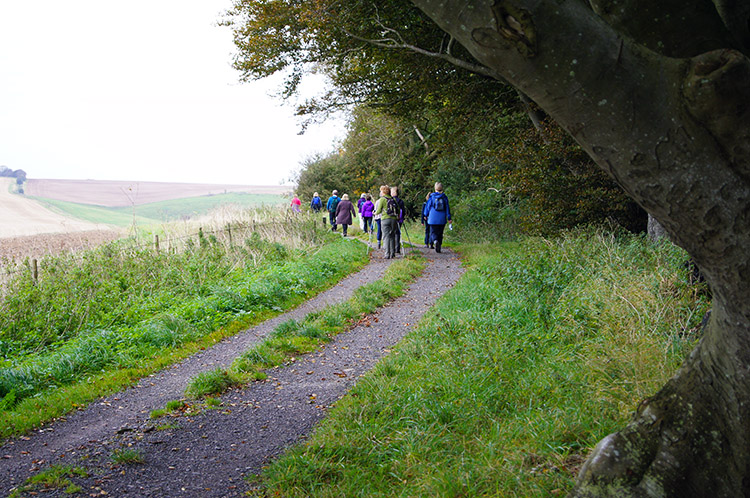 Ramblers on Round Hill Downs 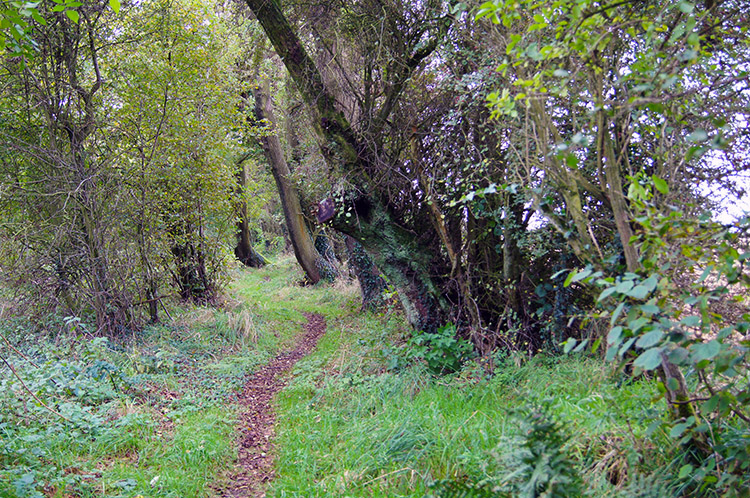 The Ridgeway narrows after Round Hill Downs

I made use of the bench to take my refreshment break and as I tucked into my bonus breakfast and pop a group of Ramblers passed right by me. There were around 20 mature and middle age walkers, mainly ladies. I spoke with a few of them as they walked by and by the wideness of their smiles they were clearly enjoying a good day out. So was I and by looking at the map I observed I could really shorten my day because I was already close to my finish at Ogbourne St George. I could have followed a track nearby to meet Old Chase Road and walk straight into the village within half an hour. But by doing so I would miss the part of the Ridgeway which completely detoured the village. The short cut was ruled out. 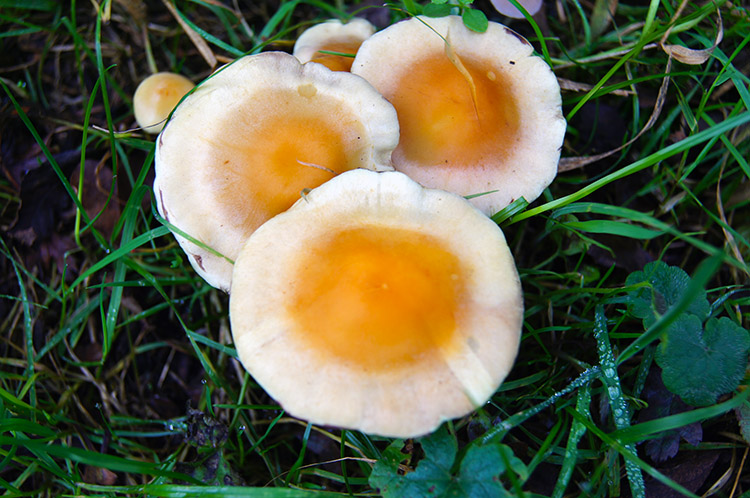 Fried Egg Fungi on the Ridgeway 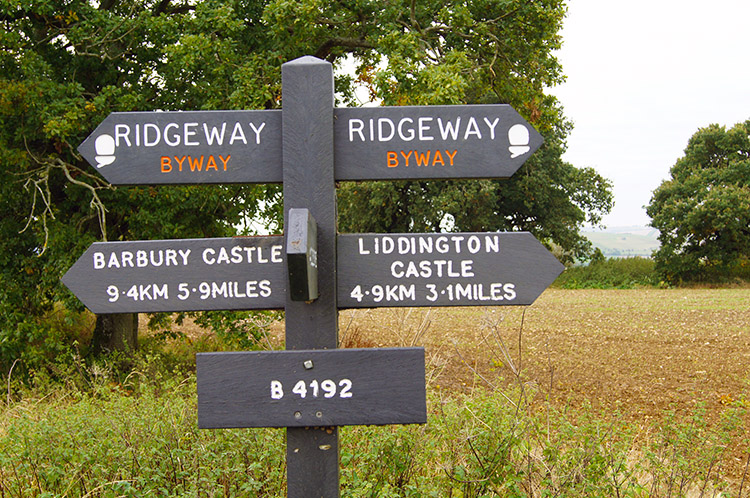 Castles in both directions

From Chase Wood I kept on the true Ridgeway path south past Buckerfield Copse and then to a very straight road south of Ogbourne St George which was once part of the Roman road from Cirencester to Winchester. Soon after crossing the Roman road I crossed the path of a disused railway which was once the Chiseldon to Marlborough line and is now a section of the The Chiseldon and Marlborough Railway Path. After crossing the railway I headed for Southend. 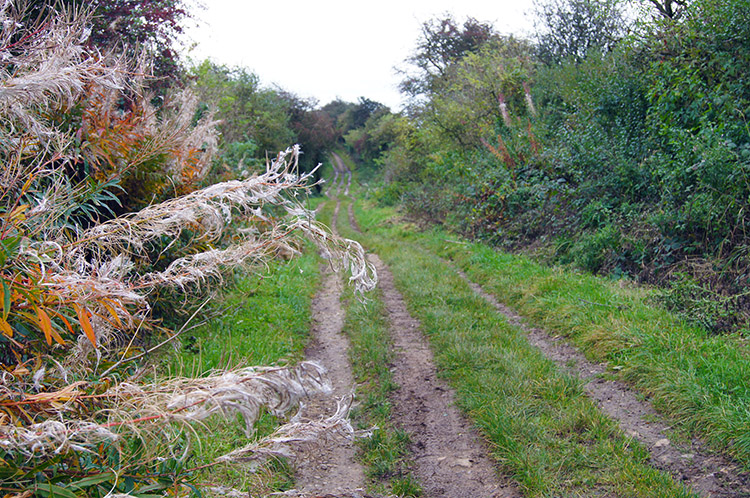 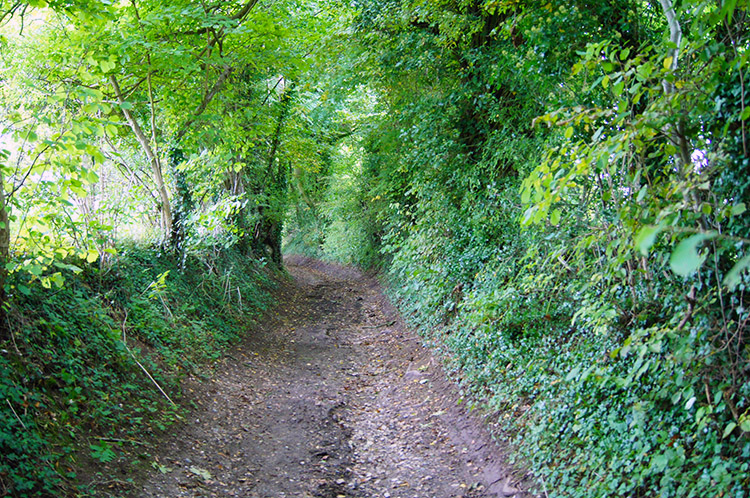 The wide open expanses of the Ridgeway Downs had disappeared after crossing the Roman road. I was now following hedge lined paths and bridleways and as I descended from the high ground towards Southend the paths became more stony. The chalk underfoot had disappeared and been replaced by hard core. It was a different feel entirely. The further I descended which amounted to 100 metres of lost height in a mile and a bit of walking then the more the views disappeared. With the hedge line thickening and gaining in height as I dropped lower it became enclosed. Eventually I reached the A346 between Ogbourne St George and Ogbourne St Andrew. After using my trusty Tufty Code which was my childhood favourite and thus one I could not give up for the Green Cross Code I crossed to reach the hamlet of Southend. 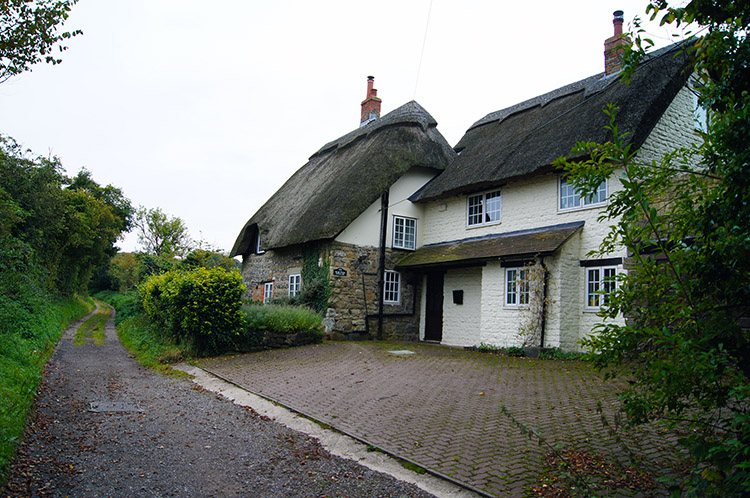 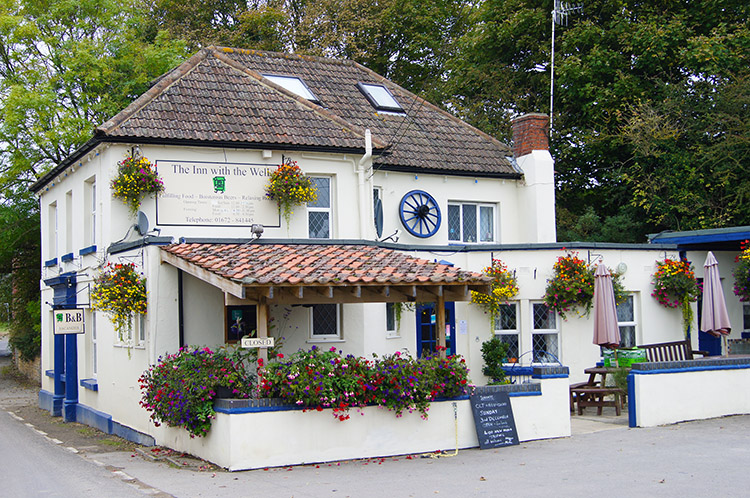 The cottages in Southend were gorgeous with lovely thatched roofs. I was well impressed by the tidiness of the gardens too, a much loved and well tended little spot well away from the modern and ugly edifices that often litter our towns and pose as architecture. After Southend I crossed a little stone bridge over the quaintly named River Og before continuing along the Ridgeway path to meet the road west of Ogbourne St George where I would leave the path for the day and walk to my base for the night. After I had done so I walked by many more impressive thatched cottages and some larger imposing buildings. My home for the night, the Inn with the Well was a splendid spot and while eating a lovely lunch the local beer was very well enjoyed. As I relaxed after lunch and in between chatting to a few locals in the pub I reflected on another good day on the Ridgeway Apart from the disgraceful road section. Anyway it is now history. I look forward to the tempting last day.