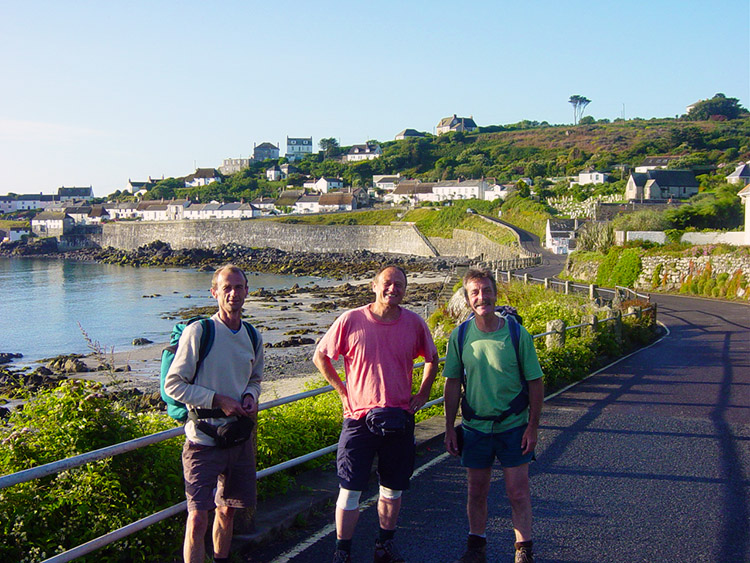 Ready to set off from Coverack 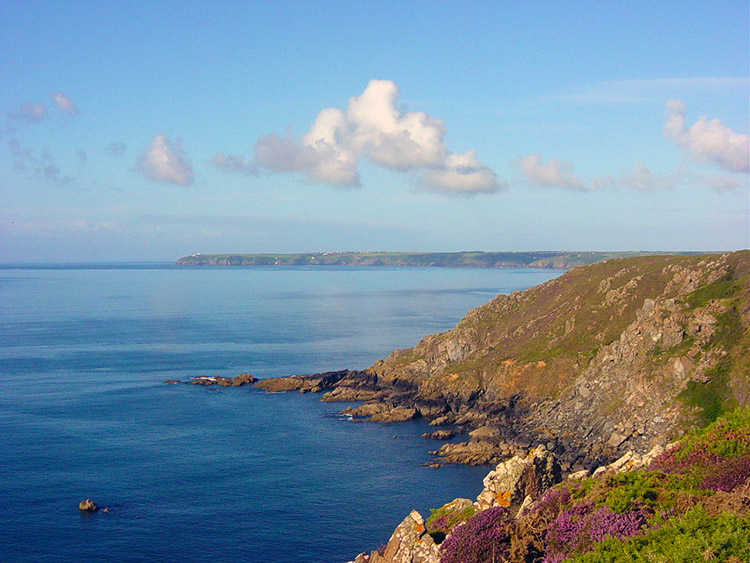 A brilliant day with an amazing conclusion. We started out by catching our lift at 7.55am. I thought he was playing Anthrax. It was Aerosmith. We're dropped off near two lovely Dutch girls. One fancies me and I want to stay after she's taken our photos. The boys moved off hastily. I moved off reluctantly. We walked around the coastal path to Black Head that gave us our first stunning glimpses of the Lizard peninsular. The walking was lovely, scenery was really great in this area and there were some old fortifications near Carrick Luz where I took time out to take a few pictures. Dave and Steve had disappeared again. Where I lost the two of them remains a mystery, all of a sudden I was alone again, was I ahead or behind, not a clue. 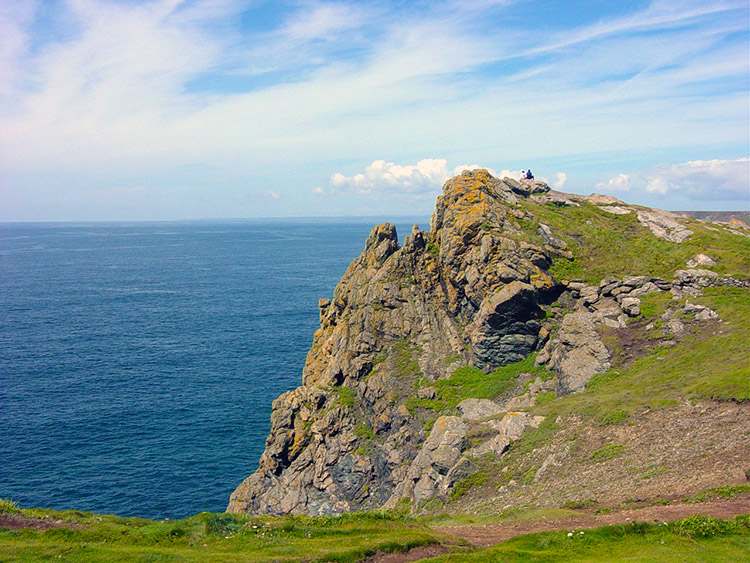 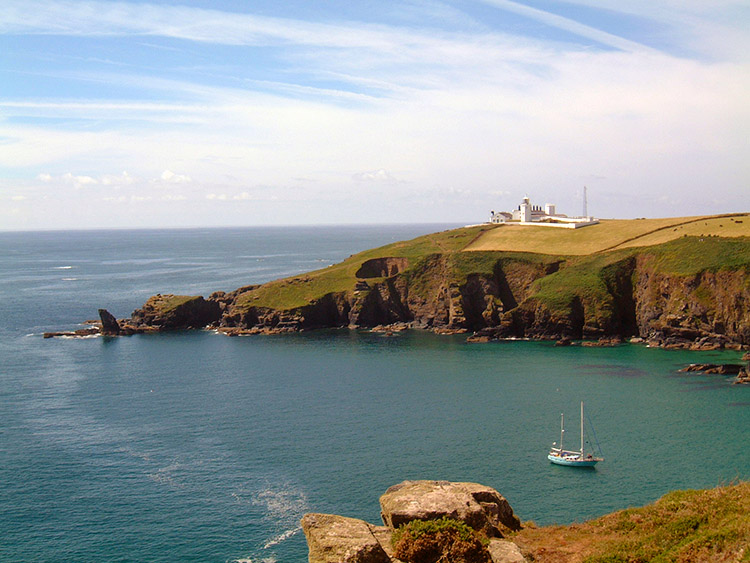 I reached Ruan Minor and Cadgwith feeling fine, the Lizard was just round the corner and soon I could see the Lighthouse buildings. It was hot and sunny as I approached the Lizard and suddenly from loneliness I was surrounded by people of several different nationalities including the inevitable Americans but also several Europeans. People were posing for shots everywhere. Charlatans, they commuted here, I had walked! I thought I could see Steve and Dave sunning themselves on Lizard Head. I took a photograph. Was it them? I rushed off to catch them but was stopped by a lady conducting a National Trust questionnaire. I helped her out. She asked questions like "Do you think the coastal path is well maintained" I told her "Yes, where the tourist spots are, not in the uninhabited and less accessible areas" I showed her the cuts and bruises on my battered body. I could see she was impressed. I moved on to Lion Rock and Gull Rock. 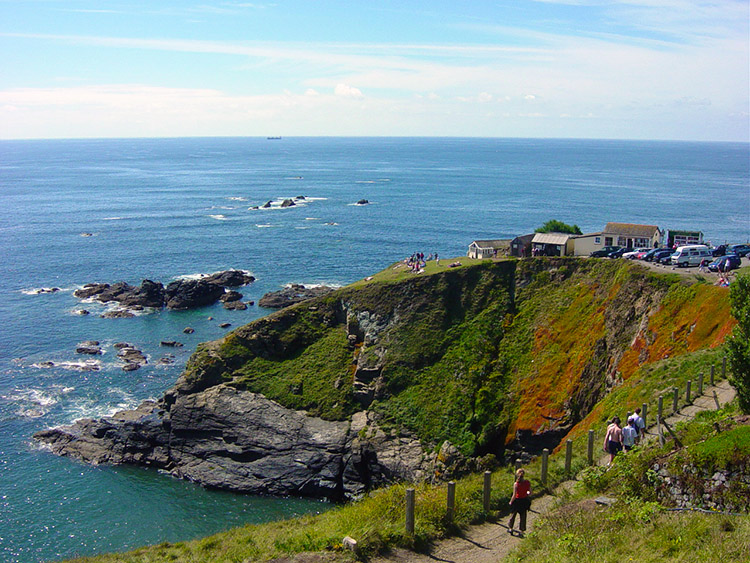 The southern tip of England 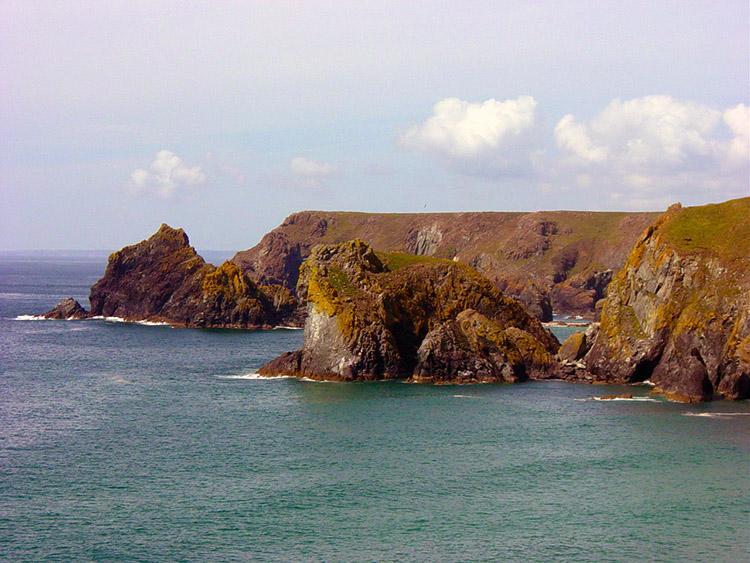 There was a car park near the popular rocks and I bought some pop, sat down and studied my map. I noticed a bridleway on the map that went across the moor skirting an airfield. I took it. It was clearly marked, great I thought until I reached a gate. At the other side were great brown hairy cows. They looked docile in the afternoon heat but they had big horns and I was taking no chances. I skirted round their field, cleared a few barbed wire fences, negotiated a bog and eventually regained the bridleway. The effort was worth it as I was now clear of them. The bridleway petered out into a lovely clear path through fields and hedgerow avenues until I reached the road some 3 miles from Mullion. The road was all up and down but another problem lay ahead. Today had been long and hot. I was jiggered walking to Mullion but had absolutely no idea where the digs were. This led to my final dilemma of the day. I had sent Steve a couple of text messages asking for information but had received no reply. My fault, I should have got the details before leaving this morning. Adds to the spirit of adventure though! All I knew was that it was a farm ran by two old ladies somewhere on the fringes of town. I dragged myself to the local Spar shop (thank heavens for Spar, they seem to be everywhere) and bought a litre of fresh orange, a litre of water and a savoury cheese baguette. There were no seats outside so I sat on the pavement and ate as people stepped around me. No shame, no concern as I needed the fuel to help me find the farm. 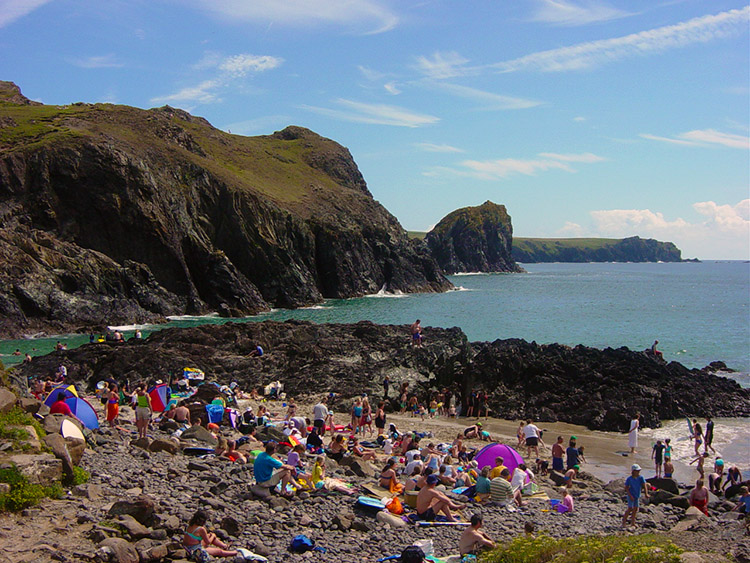 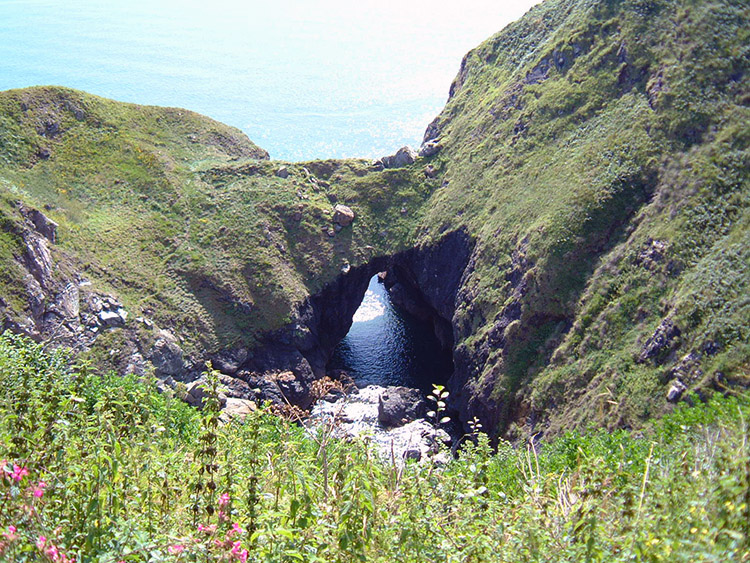 I asked what I could remember about our digs in the Spar and went to a farm between Mullion and Mullion Cove. Wrong. I went to the pub and asked. They suggested a farm down the road. Wrong. I went back to the pub and asked if they had any spare rooms. No. Then a local guy the bar suggested I tried a farm at the bottom of a lane about half a mile outside town. Last chance, its this or I make my way to Portleven and find somewhere there or bunk down in the hedgerow! As I am walking to the farm I pass a cottage. I notice it says 'Meager Farm' That's familiar I think but then Meager is a common name in the Yorkshire Dales. 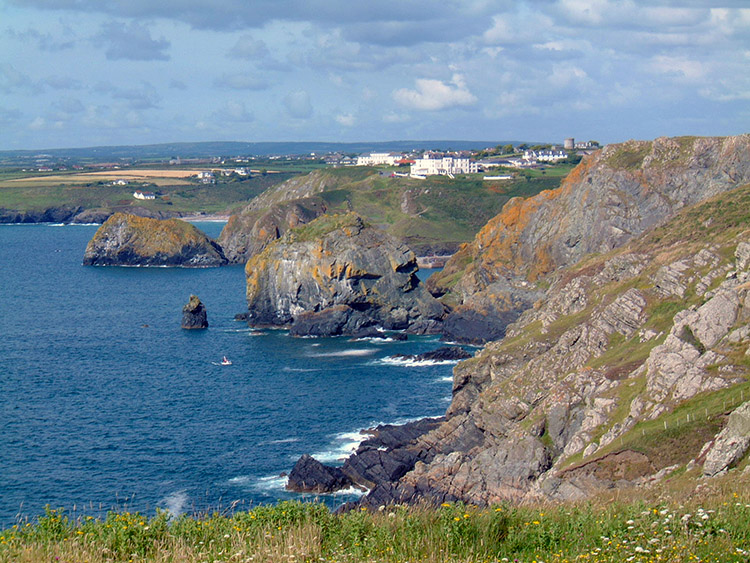 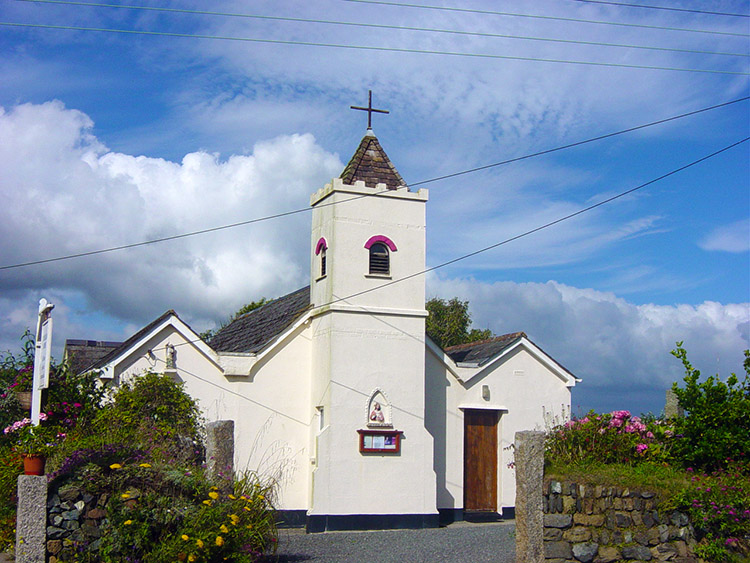 As I was passing Meager Farm I exchanged courtesies with a chap coming out of the gate and crossing the lane to his orchard. We looked at each other but I moved on down the lane to the third farm. Wrong. Bollocks, I walked back up the lane and coincidentally bumped into the chap I had met on my way down. This time he was coming out of his orchard and returning to the house. In desperation I asked "Do you provide accommodation" He replied "Yes" I went on to ask "You don't happen to have a booking for three under the name of Scott" "Yes, I do" he said. I nearly fainted with relief. I went into the kitchen with him where I met his wife. They made me a gorgeous cup of tea and after drinking it I went up to my room. Almost immediately Steve and Dave arrived. Wow. The Mullion night life was not much to write home about but at least Steve saw his Morris Dancers! And some people in the pub warned us about Loe Bar, an obstacle we face tomorrow.