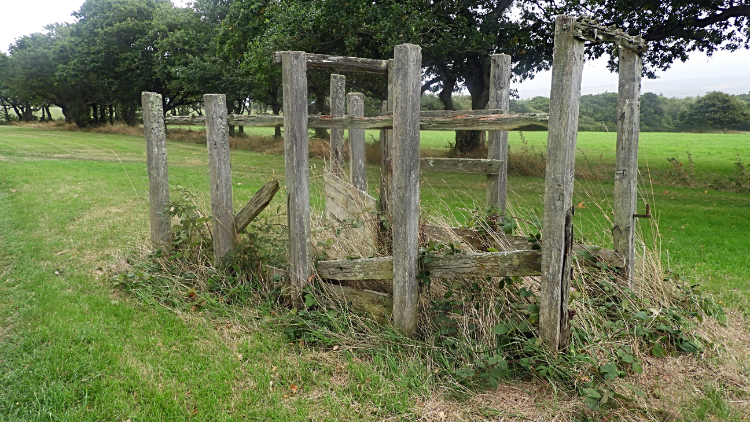 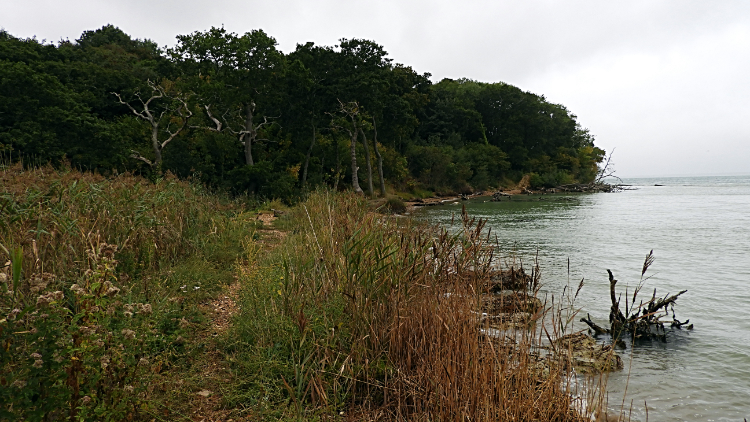 An early start to stage two. After an early breakfast I was out on the trail by 7.30am and heading from Hamstead to the very west point of the Isle of Wight. First I followed the path through as few fields near West Hamstead Farm. One field had a wooden contraption isolated in the middle. I guessed it must have been for restraining stock, possibly cattle, in order to inspect or treat them. It was clearly a redundant fixture now. After the fields I followed leafy woodland trails set within a community. Some houses were grand affairs, others more humble. Some were secretive, some welcoming such as one which had "Happiness is a walk in the woods" written on the back of a garden shed. The message was accompanied by happy human figures and a bright rainbow. The weather was not so bright though, the sky was full of cloud and it was drizzling. I hoped for better, the weather forecast for the week had been a good one before I had left home and it was letting me down. I didn't want to put my full wet weather gear on and as it was only light rain I refused to. I left the inhabited woodland to reach open heath beside Bouldnor Copse, a large area of pine plantation. The closest area of plantation had been recently felled allowing me a great view down to the neck of the Solent near Yarmouth. The coastal path led me down to the sea near Bouldnor. There was carnage there, many trees collapsed into the sea. A sign told me to divert from more landslip, the cause of the flotilla of trees in the water. Just before heading inland to the village I read a sign telling me of the Bouldnor Cliff Mesolithic Village seaport. I would have needed SCUBA gear to see it. Staying as dry as i could in the light rain I continued on to follow the road from Bouldnor to Yarmouth. 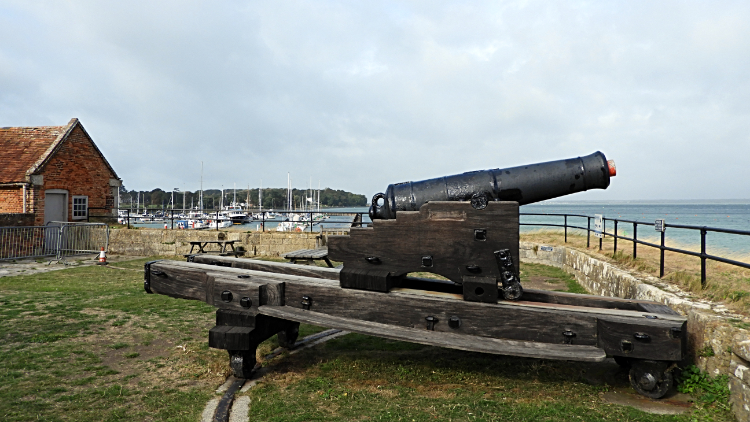 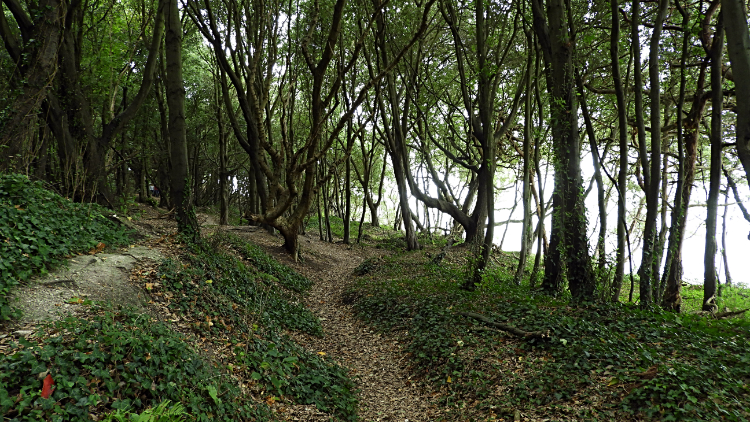 I arrived in the town of Yarmouth and being a English Heritage member I decided to take a break from my walk and visit Yarmouth Castle. My only problem was that I had arrived in Yarmouth at 9.15 and the castle did not open until 10.00. "Ah well, time for a leisurely look around the town and then a coffee" I mused. Especially as Yarmouth was the last town I would visit on the island for a few days. "Better now or never". My look around Yarmouth led me through the main street and on to the pier which provided a great view back to the castle and its position guarding the town. Afterwards I sought out a lovely coffee shop on Quay Street and relaxed while waiting for the castle doors to open. At ten o'clock prompt the doors opened and I marched in to make the first inspection of the day. Thirty learned minutes later I left the castle to continue on my way westwards, leaving Yarmouth by way of the marina to reach the coast path which would now truly lead me on a coast path to Sconce Point, Fort Victoria and the country park of the same name. I sensed a change in the weather, cloud broke briefly to allow glimpses of sunshine. Nothing great and nothing sustained but a sign of improvement. And the drizzle had stopped. I followed the coastline on a path with a long concrete sea wall between me and the water. Small iron framed and wooden plank piers/ jetties were set at regular intervals. All had one thing in common. They were dilapidated, some with breaks on the slatted platforms and some devoid of slats to stand on at all. All unfit for their original purpose. Coastal defence buildings on this stretch were in the same state. Derelict. I came to a tractor beside the path. Decrepit, wheels last turned a long long time ago. It was as if time had forgotten this part of the island which I found quite romantic. I arrived at Fort Victoria, once a coastal defence and now serving shops and cafes. Not that anything was open as I passed. Out of season? Next I arrived at some remarkable wood carvings made from naturally felled trees on the beach. I met a lady also admiring the intricate woodwork who told me they had been created by a local craftsman called Dave. I was very impressed, images of birds, fish, reptiles, mammals and more. (Postscript: Sadly I read some cretin had chainsawed some of the carvings and stolen them from the beach a month after my visit. So for those who cannot see the lost works of art here are my original photographs of the wood carvings. Please enjoy). 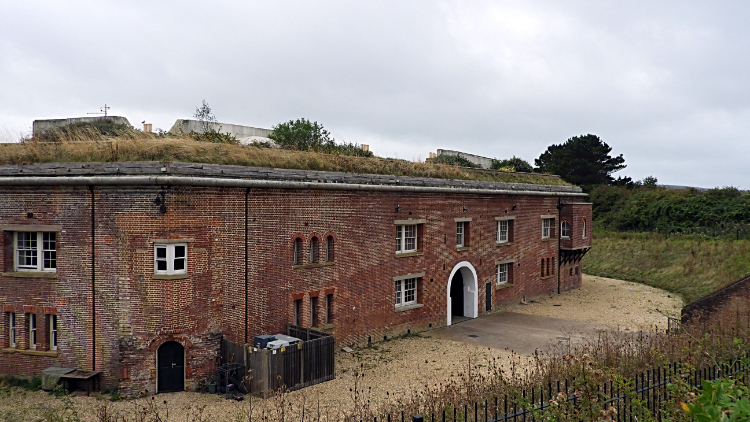 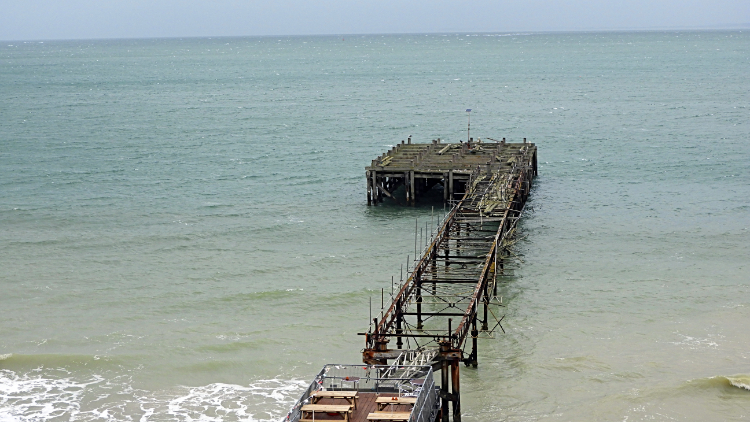 After enjoying the wood carvings on the beach I walked through Fort Victoria Country Park which was a complete thrill. The woodland trail meandered its way through wonderful arrays of trees. The woodland floor was bedecked with green and along the way more wood carvings showed themselves. Best though, gaps in the tree line of the wood allowed me a great view across the narrowest part of the Solent to Hurst Castle, less than a mile across the water on the South Coast of England. Closer still on my side of the water was the grand building of Fort Albert, once grand defence and now humbled and converted to private flats. Continuing on I left the country park and the coast to head inland, along Monk's Lane. Staying on the lane a little further than the coastal path would lead I set my sights on seeing Golden Hill Fort, originally a defensive barracks for military stationed on the island. Like Fort Albert, Golden Hill fort is now privately owned and part residential. After my visit I returned to the coastal path by way of Freshwater, the Isle of Wight's most westerly village. Ironically Freshwater is more than twice the size of Yarmouth, one of Britain's smallest towns. The seafront of the village looked sadly forlorn. The pier was part standing but the landing was completely collapsed. And a middle section was gone altogether. I made my way from the carnage and set my sights on the Needles. 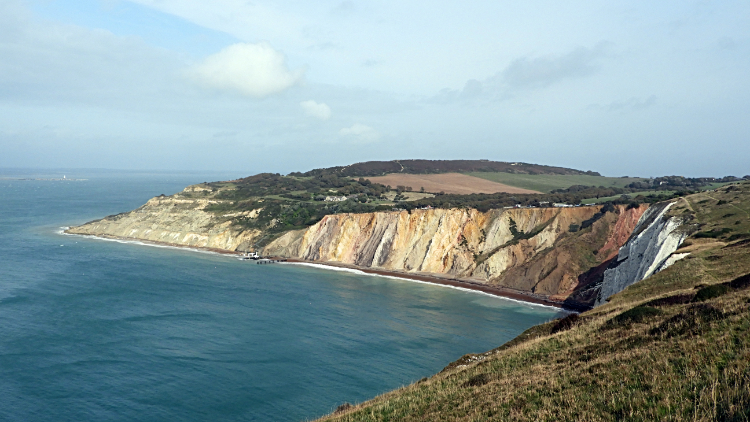 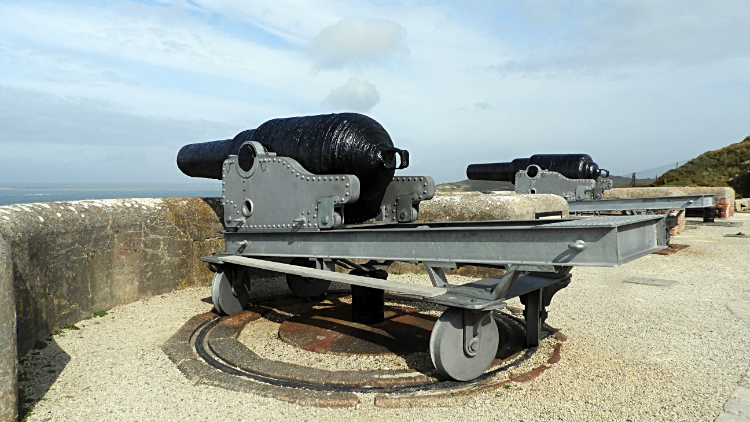 Cannon at the Needles Old Battery

It was cloudy when I set off from sea level at Totland Bay, Freshwater. In fact it was cool too with a stiff breeze. I warmed myself up climbing steep steps from the seafront up Widdick Chine to reach Cliff Road which I followed up a steep rise to Headon Hill, 120 meters high. Remarkably and most fortuitously as I had made the longest single climb of my day from sea level to the scrub lined path across Headon Hill the cloud that had filled the sky all day began to break up and to disappear from the sky. I was to be blessed with sunshine for my visit to the Needles, my anticipated highlight of the day and one of the premier natural sights of the entire coastal walk. I could hardly hold my excitement and seeing the sunshine begin to fill the scene all around almost caused me to break out into a trot. I did not want to miss seeing the Needles in perfect natural sunlight. When I first spotted the Needles I was gobsmacked, they being the only part of the Isle of Wight in sunlight. But for sure the sunlight was heading my way too. By the time I had crossed Headon Hill, spending a brief time at another concrete defence bunker on the hill, and descended to the Needles Landmark Attraction at Alum Bay the sun had completely broken through. Breaking my excitement for a moment I called in the Needles Park to stand at the Marconi Monument. There I looked at everyone with smart-phones, lots of them photographing the monument and thinking "We have come a long way". From the park I headed uphill, following people for the first time on my walk today, to the Needles Batteries. On my way up I paused to look back across Alum Bay and to the sumptuous looking multi-coloured sand cliffs. 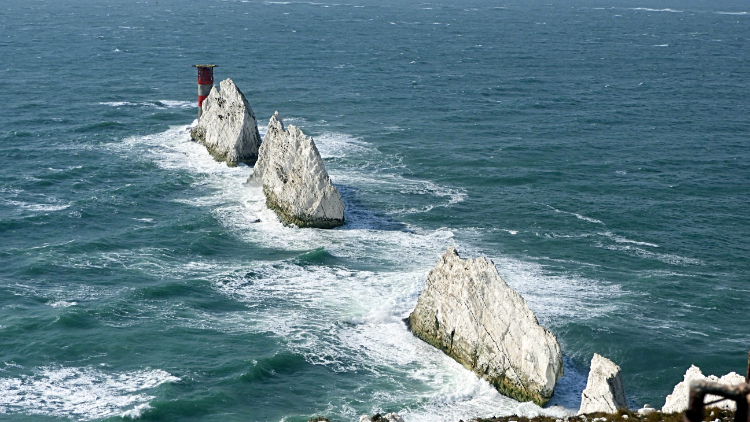 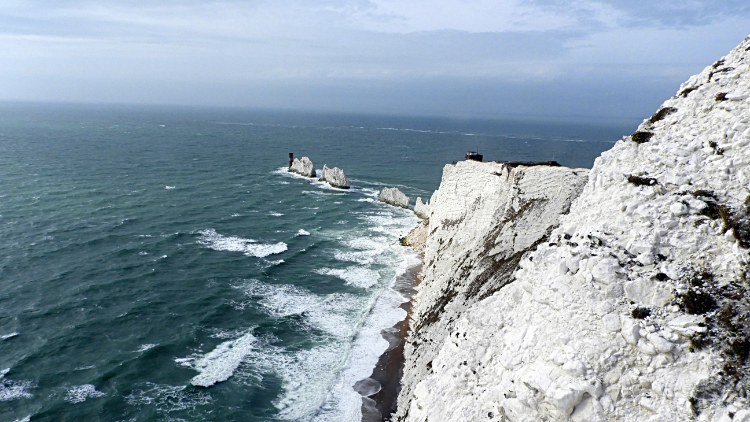 View to the Needles from Sun Corner

I arrived at the Needles Batteries and took time out to explore them. From a standpoint at the Old Battery I got a great aerial view of the Needles directly below me. The Needles are three chalk sea stacks which stretch out from the west-most tip of the Isle of Wight and they are truly beautiful. The Needles Lighthouse stands at the end of the outermost stack. There used to be a fourth true needle shaped stack called Lot's wife beyond the existing three but I would have needed to visit before 1764 to see it. That year it collapsed into the sea during a storm. After taking a long look at the magical draw of the Needles I toured the Old Battery and then the New Battery. Both defence stations were interesting to see though neither actually saw serious action in Imperial or Napoleonic wars. Though they did during the world wars. From the batteries I walked to Sun Corner where I got another view of the Needles and of Scratchells Bay too. Then I visited a rocket exhibition which was a bonus. There was a rocket testing site here too in the past and the exhibition had models of rockets, old computer models and also a life sized replica of Prospero, the only British built satellite to be launched with a British rocket. The things you learn on a walk eh. 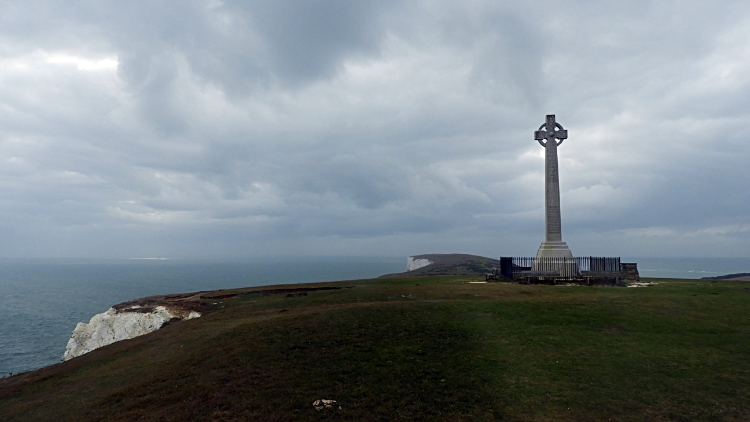 Tennyson Monument on Tennyson Down 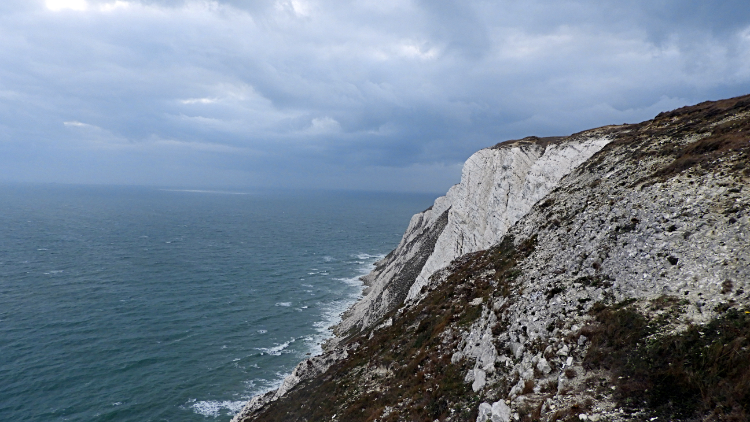 Highdown Cliffs and the English Channel

I had enjoyed a most opportune sun blessed interlude on the west tip of the Isle of Wight and while at the Needles and the Gun Batteries for as soon as I left to walk across Tennyson Down the clouds rolled back in from the west. Up on Tennyson Down and walking across exposed ground at around the 130 meter level was a cooling experience. I had taken my coat off when the sun was out at the Needles. It was back on and zipped up now. I set my aim for the Tennyson Monument (Tennyson Down and Tennyson Monument are named after the famous poet who lived his later years locally) which I could not miss keeping track of. It was clearly visible at the top of the down, drawing all around towards it. I spotted a couple ahead of me heading towards it and as I neared it myself I saw another couple climbing up from the north. And when I arrived there was a family group there too. I guessed they were German visitors. The language and accents you see. From the monument I dropped to a point near Highdown Cliffs and then I followed the Tennyson Trail off the down and into Freshwater Bay. A front was sweeping in as I arrived at my accommodation and it rained down soon afterwards. It did not matter, I had finished another memorable day on my walk around the Isle of Wight. I enjoyed a good evening in that knowledge and rested well, looking forward to the next adventure.