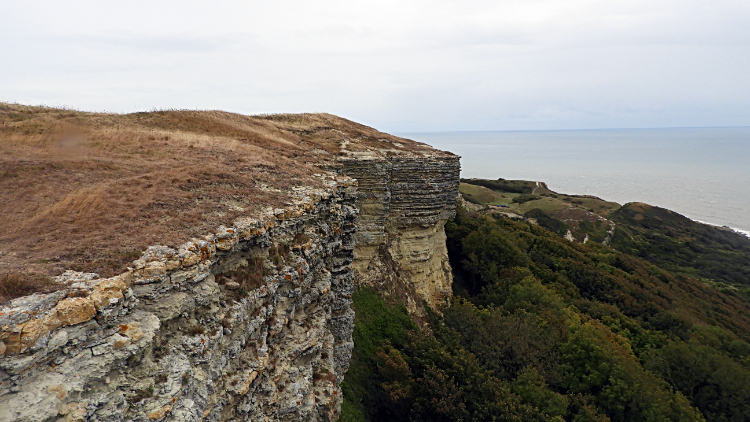 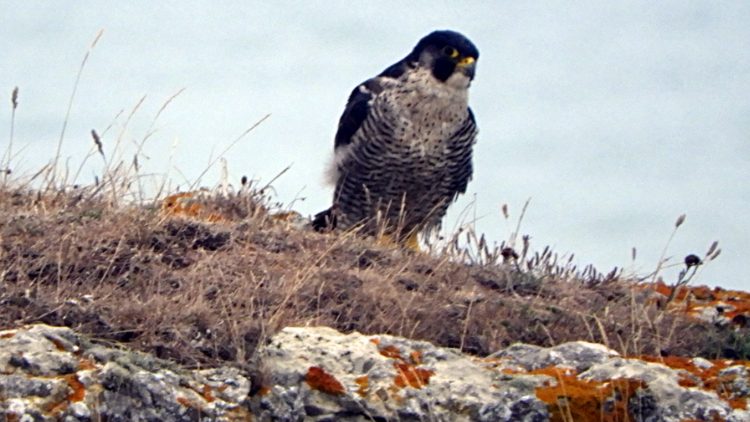 A storm was coming. Having arrived in Chale to blue skies the night before, I was leaving the village under leaden skies. And while it was not yet raining I knew it was coming. Carol Kirkwood had told me so. Though so had not needed to. I could see the signs for myself. "Bugger the weather, let's walk". Three days gone on my Isle of Wight circuit and tree days to go. I was now passed half way as I climbed from Chale by the side of Blackgang Road and past Blackgang Chine to reach a viewing point car park. From the viewing area I left the road and followed a path to Gore Cliff. As I reached the cliff top it started to rain. Not heavy at first but it was not stopping. I quickened my pace as there was no cover on top of the cliff but not long after I had stepped on it I came to an abrupt stop. Looking ahead of me to the edge of the cliff I spotted a large bird. It had not spotted me, too busily looking from the cliff to the tree line of woodland down below. I was about 30 meters from the bird and I stood as still as I could. Except for grabbing my camera and fixing my sights on it. Zooming in I focused on what I was looking at and made my identification. "WOW, a Peregrine Falcon. Flipping heck, this is brilliant".. I was spellbound by the bird. I had seen Peregrines in the wild before, at Malham Cove in my local Yorkshire Dales and once before on a cliff-top in Jersey. But on that occasion I was on the beach and the Peregrine a distant figure about 100 meters away. This encounter was up close and personal. I stood for ten minutes, taking a few photographs and then just standing in awe looking at the magnificent bird. It was clearly on the lookout for its breakfast. Eventually I had to stir, make a tentative step forward and as I did the Peregrine focused on me and then dropped from the cliff. I watched it soar effortlessly over the tree line towards St Catherine's Point. "That has made my day" I mused as I continued walking across the length of Gore Cliff. 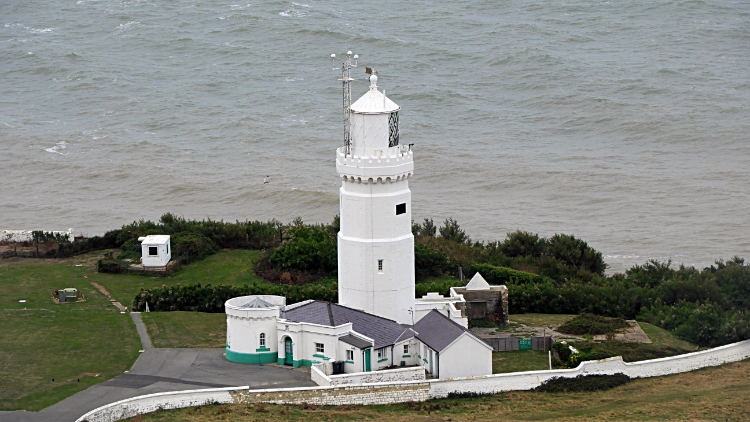 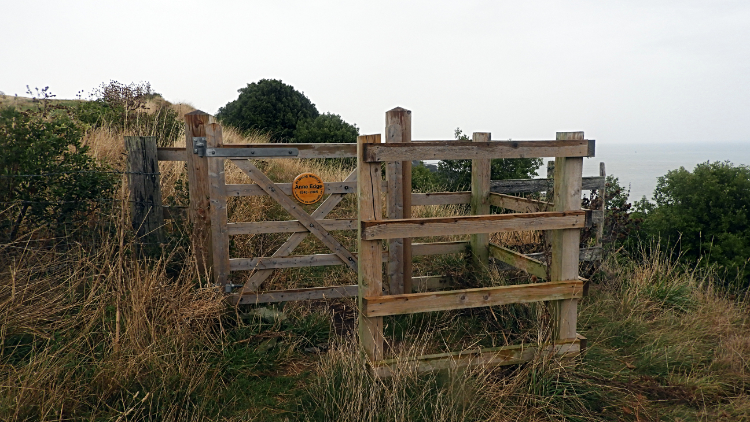 Continuing on my walk to the south-most tip of the Isle of Wight with the biggest smile on my face I transitted from Gore Cliff to West Cliff. Looking down to my right I was drawn to the white buildings of the lighthouse at St Catherine's Point. Apparently St Catherine's point is often foggy, so it is not the best location for a lighthouse. However it is a pretty lighthouse. I enjoyed my view of it as I walked on by and towards the village of Niton. The rain was getting heavier all the time now and I was pleased to reach the shelter of copses and paths along field sides which were bordered by thick leaved mature trees. On the last stretch of walking down from the cliffs to a road crossing at Niton was deep set in a lovely holloway trail. I love walking in holloways, knowing many people over many moons have walked these tracks before me. 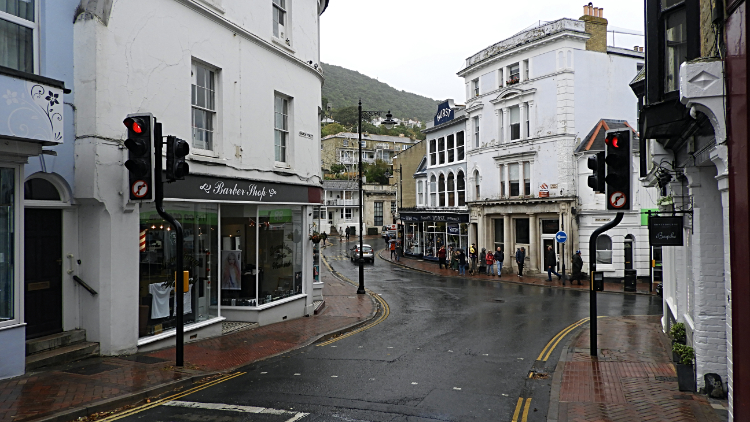 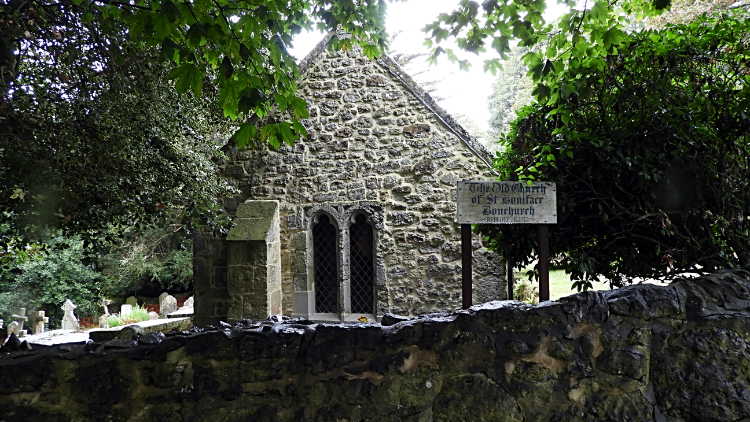 The next hour of walking was a mix of crossing fields, most of them farmed arable, and of walking along thickets and copses between the farmlands. The rain forced me to keep my head down and concentrate on making progress. On the occasions i could look out to the sea on my right it was dank and almost indistinguishable from the claggy gray skies hanging over everything. So much different from the beautiful blues of yesterday. Approaching Ventnor at a point near the community of St Lawrence I came to a crossroads of paths. Public Footpath V77 led to t Lawrence Shute. V79 said Cliff Path to Niton, "just done that". V80 was to St Rhadegunds Path and V81 to St Lawrence. I should strictly have follow V81 down to St Lawrence and followed the coast path into Ventnor but instead I took V77 to St Lawrence Shute. (note: maps and download files follow thew true route and not my deviation). This kept me higher than the village and on a series of really interesting paths. Some were through more woodlands which protected me from the rain and some on paths edging beside inland cliffs which while interesting in themselves, also kept me sheltered. Some of the paths were switchbacks which caused a little extra walking which I could not care less about. Other paths led up or down steep series of steps, all with generous supporting handrails. All was good. All was fun. And it kept my thoughts from the rain so much that soon later I arrived in the center of Ventnor, the Isle of Wight's most southerly resort. Late season holidaymakers were still around, some of them resisting the weather and walking about town. All were in full waterproofs though. Some holidaymakers and no doubt some locals were out just to getting shopping. They trudged about with their shopping bags and with their heads down. I reached the art deco Poirotesque Ventnor Winter Gardens and decided to have lunch there. And drying out at the same time. It was forty five minutes of enjoying very cheap food and drink while watching out over Ventnor Bay. A lone angler fished from the seafront, draped in all his wet weather gear. Back on the trail and soon wet again I followed the coast path past Horseshoe Bay and to Monk's Bay before diverting up to visit Old St Boniface Church. From there I scrambled through yet more thicket and thick undergrowth towards the Bonchurch Landslip. 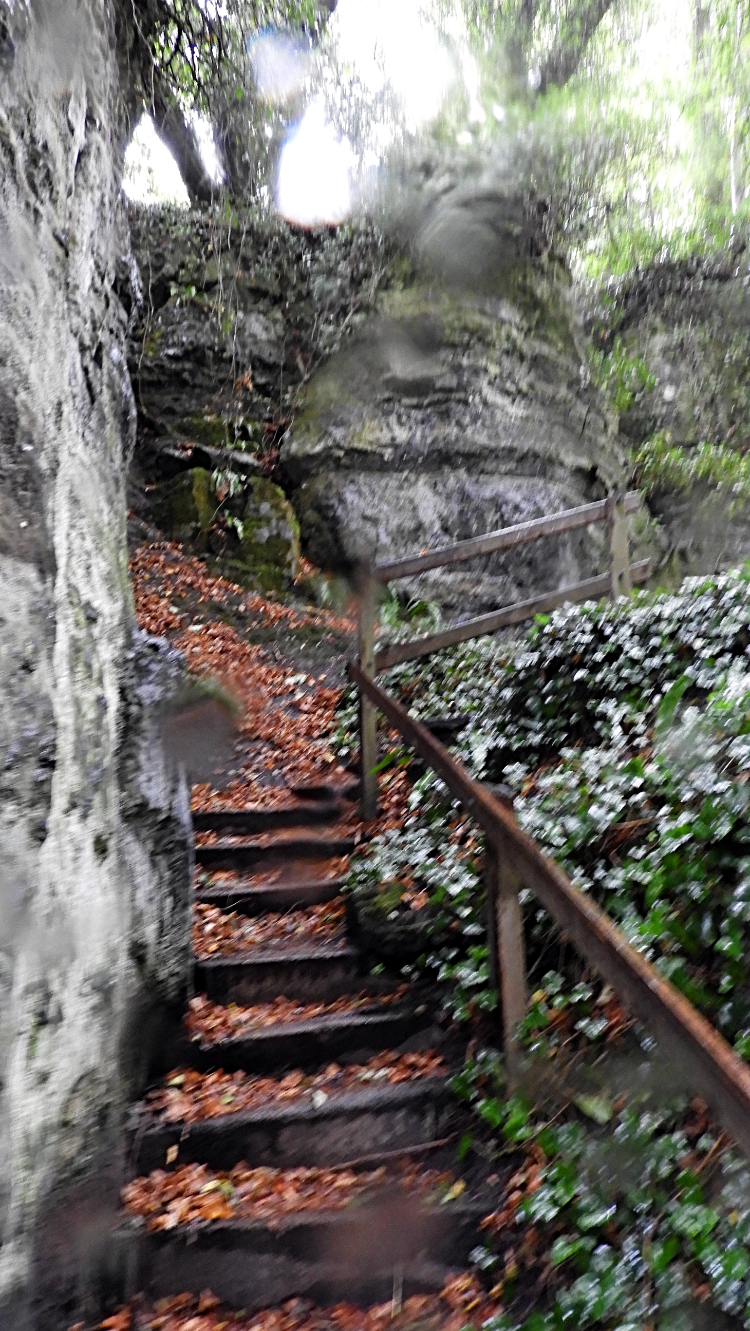 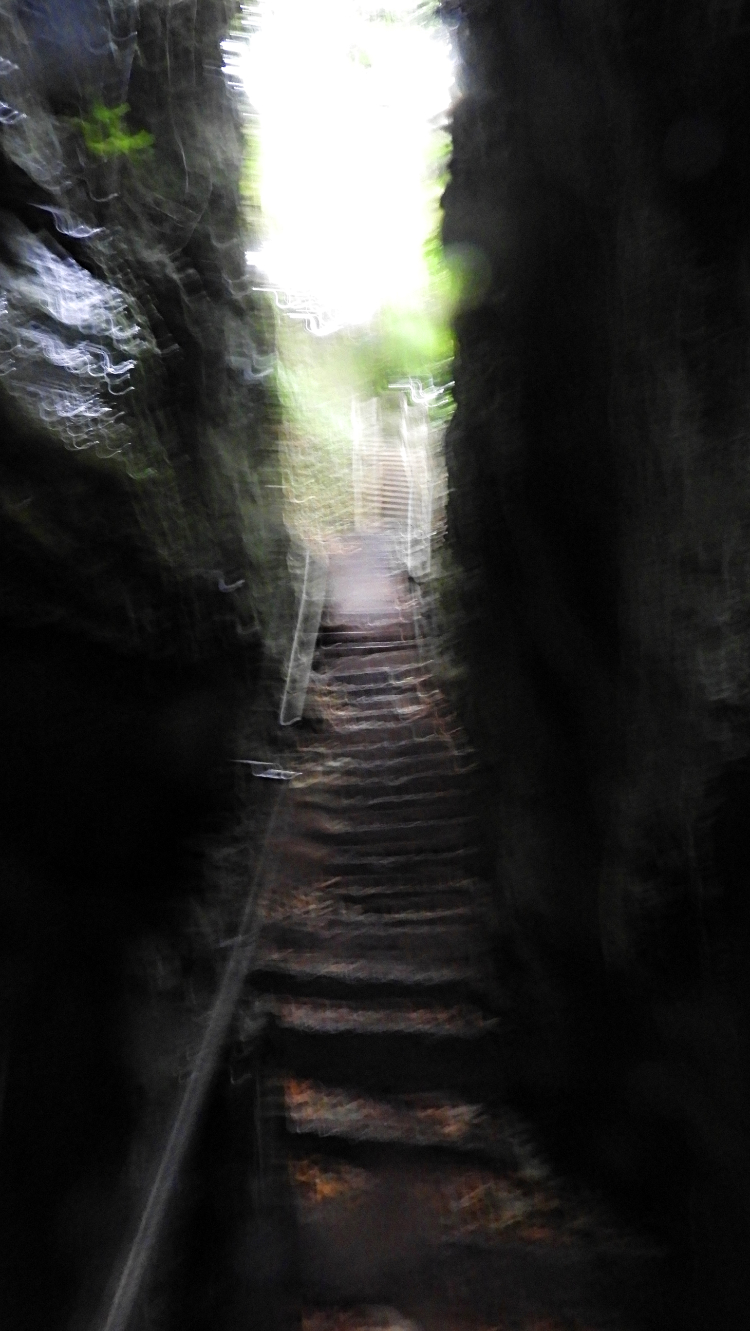 It was properly raining now. Pouring down in fact and the noise of heavy rain hitting the canopy of the woodlands in the Bonchurch Landslip area was quite deafening. I appreciated any shelter the trees, the shrubs, the outcrops and the cliffs gave me now. When exposed in the open I could not look forward without covering my eyes from the force of the driving rain. Water ran from the hood of my raincoat and down my nose. It was an uncomfortable time. During this worse time of the weather I also had to keep my wits about me as I was trying to find a particular place in the warren of paths in the Bonchurch Landslip area. I was seeking out the Devil's Chimney. Fortunately a sign led me to some wooden steps which I climbed to reach another series of steps, these of stone which led me straight into the Devil's Chimney which is a narrow stairway leading though a narrow gap between two huge rocks. Which were probably naturally split from the same rock during one of the landslips. Now that must have been a deafening noise when that split was made. From the Devil's Chimney I found my way to Smugglers Haven Cafe which I had read about earlier in the day. I needed a hot drink and another dry out. The refreshment was thoroughly enjoyed while I dried out a little more before leaving the cafe to face the rain again. 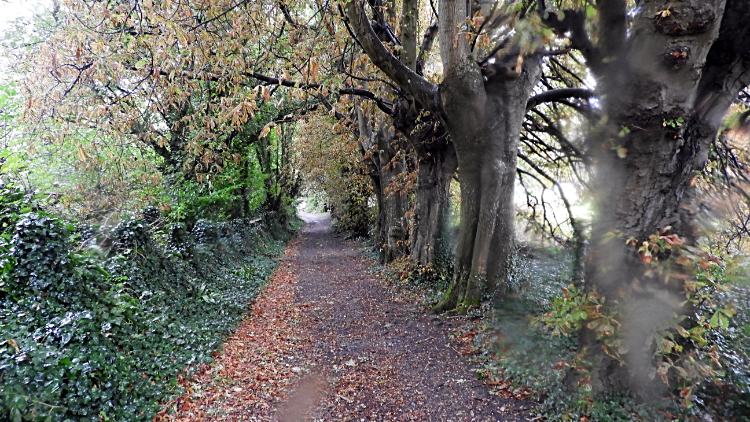 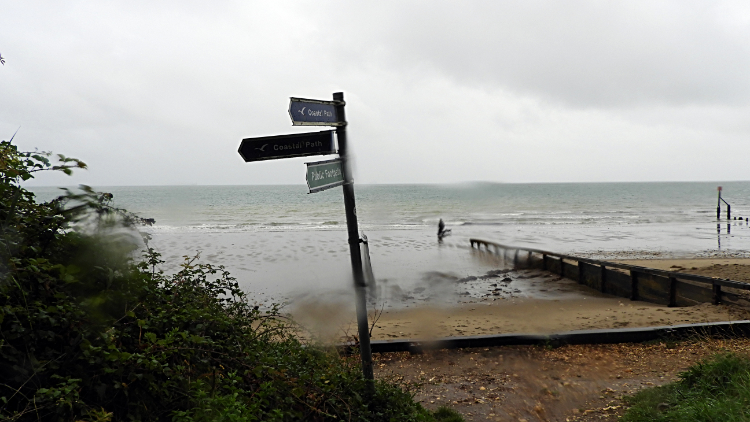 From the cafe I walked on northwards on the east side of the Isle of Wight towards Luccombe Village. My adventures on the west coast and south coast of the island were now completed. "Ouch!, what happened there". While walking down a stone step path through woodland one of my feet slipped forward; I cannot remember which. The result was I landed flat on my backside with a thud. It was painful. not so much my bum though that did hurt but more so my hand left and elbow which I had hurriedly used to try and subdue the impact on my bum somewhat. "Curse, curse, curse, curse" I voiced under my breath "Why was I so careless". I realised I was not really. I had just been too relaxed after my break and taking it easy. The path was very slippery in the conditions. Needless to say I was very cautious afterwards. I reached Luccombe Village, scene of some posh and some enviable houses, and carried on my way north towards the town of Shanklin. Nobody was home in the popular seaside resort. Well, nobody was outside anyway. It was grim as I soldiered on through the town. 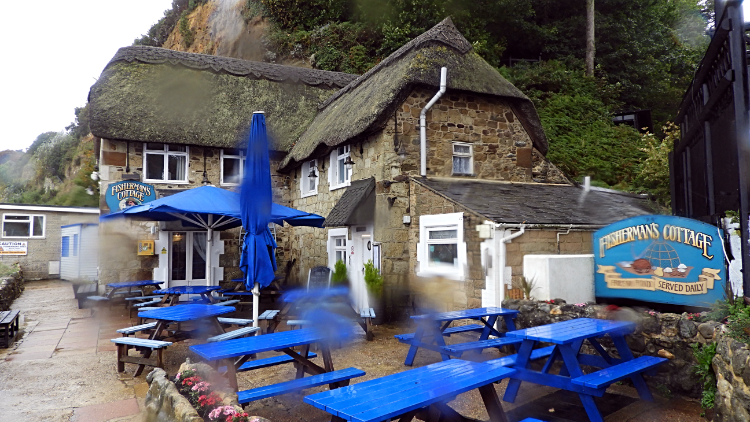 Not the day for sitting outside 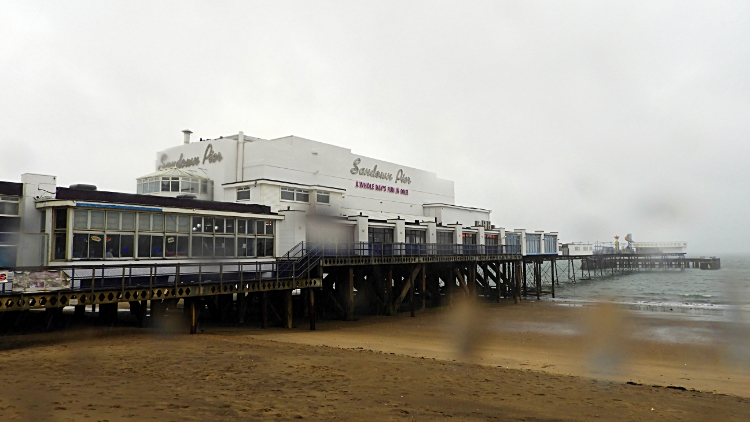 Shanklin came and went. Sandown came next. There was no discernible gap between the two resorts, one simply merged into the other. Both cover the extent of the seafront of Sandown Bay and both have lots of inviting attractions. But nothing was inviting on this most horrible of days. I passed invitations from 'The Other Woman' (a boat), from the Fisherman's Cottage Inn (deserted) and from Sandown Pier offering me a whole day of fun but all I wanted to do was reach my accommodation at the Royal Hotel and to get out of my soaking clothes, to shower and to dry out while warming up inside. And that is exactly what I did. Later, when comfortable again I recalled the day and most of all with that magnificent encounter with the Peregrine Falcon. And also of the thrill of climbing through the narrow chasm of the Devil's Chimney. It would have been better in the sun but hey, I can't have it all. And rain is an essential of long distance walking anyway. All was good in my world. I had a last thought before retiring though... "Be dry tomorrow please!"